The celebration of creativity across the UK continues with magical installations, free and family-friendly events, and immersive digital experiences that will challenge the way you think during UNBOXED: Creativity in the UK.

Scotland’s contribution, Dandelion, is in full swing showcasing the ‘grow your own’ initiative with country-wide events and community festivals to get involved with. The programme follows the arc of the growing season, from April to September, and will culminate in hundreds of harvest festivals across Scotland in September – reimagining the cultural celebration of harvest for the 21st century. Beyond Dandelion, Scotland is hosting four other projects presented as part of UNBOXED. 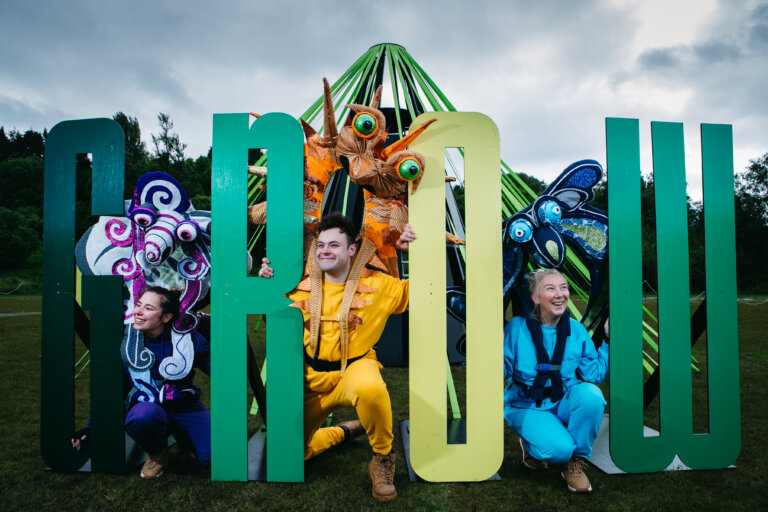 Hundreds of thousands of plant plugs are being given away at Free for Alls events all over the country encouraging people to “Sow, Grow and Share”.

Enjoy a performance of harvest songs from across the world by a five metre ‘Flower Singer’ accompanied by other performers representing sun, wind and water. A team of growing specialists from Scotland’s Rural College (SRUC) will be distributing the plants and are on hand to give advice and tips to those new to growing.

Delivered in communities across Scotland for people who are new to growing, these events are running until 23 July with Falkirk, Edinburgh, Stranraer, Helensburgh and Inverness giveaways still to come, encouraging everyone to get growing this summer. 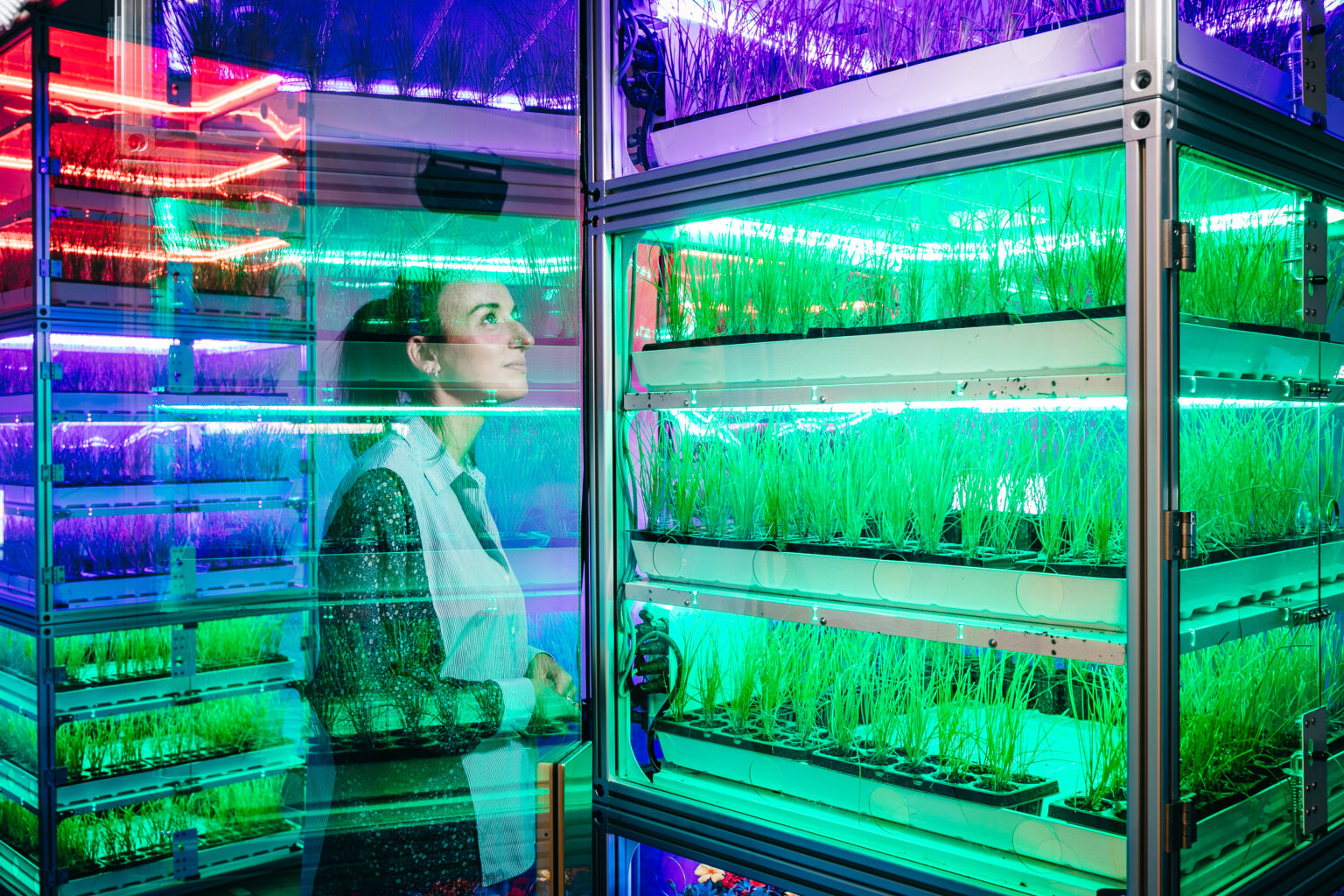 At the centre of Dandelion, is a meeting of art and science through the creation of hundreds of unique miniature ‘growing cubes’, called the ‘Cubes of Perpetual Light’. These cubes are specially designed to foster accelerated plant growing and have been developed to grow hundreds of seedlings under LED light.

The cubes aren’t just miniature growing laboratories, they’re also the inspiration for new music which people are being invited to experience at festivals and venues across Scotland this summer. These special installations are also integrated with stunning quadraphonic speaker systems designed to best showcase the new music compositions playing from the cubes.

Explore the Cubes of Perpetual Light 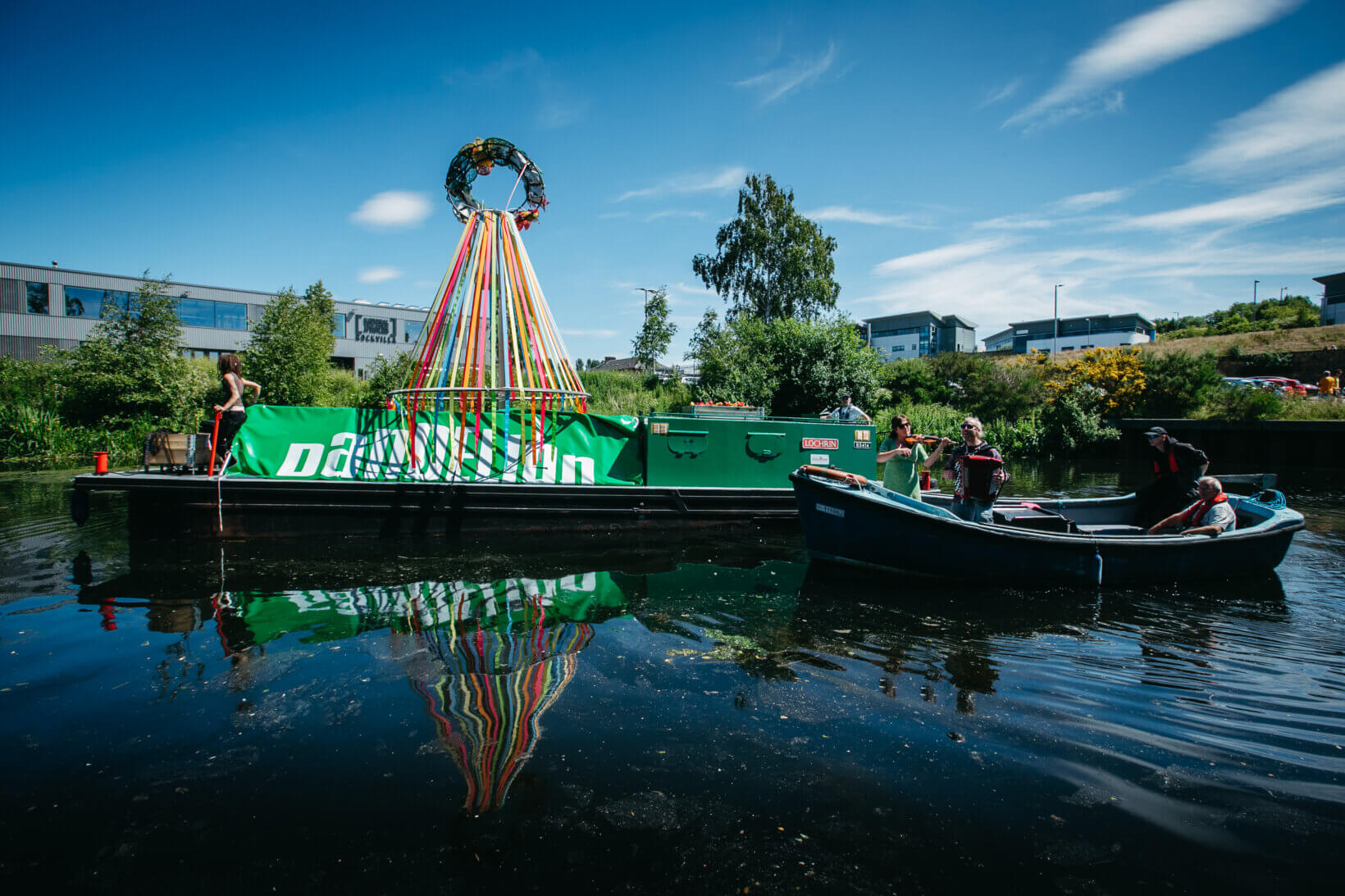 The Unexpected Garden series of specially created ‘edible’ gardens are coming to life on patches of unused land in unexpected places all over Scotland as part of Dandelion’s a unique nationwide “grow your own” food initiative.

Bringing new life to community libraries, waterfronts, car parks and even tidal sites from the western isles to the Scottish Borders, the Unexpected Gardens also host local community focused events unique to each location throughout the summer too.

As part of the Unexpected Garden series is the Floating Garden. Made up of three elements: a barge from Scottish Canals converted into a floating allotment, a performance stage home to a huge flower puppet, and an eco-garden drawing sustenance from the canal and in the process cleaning the water and feeding the plants. After touring the Scottish canal network, travelling from Glasgow to Edinburgh, this installation will be residing at The Kelpies from July to September. 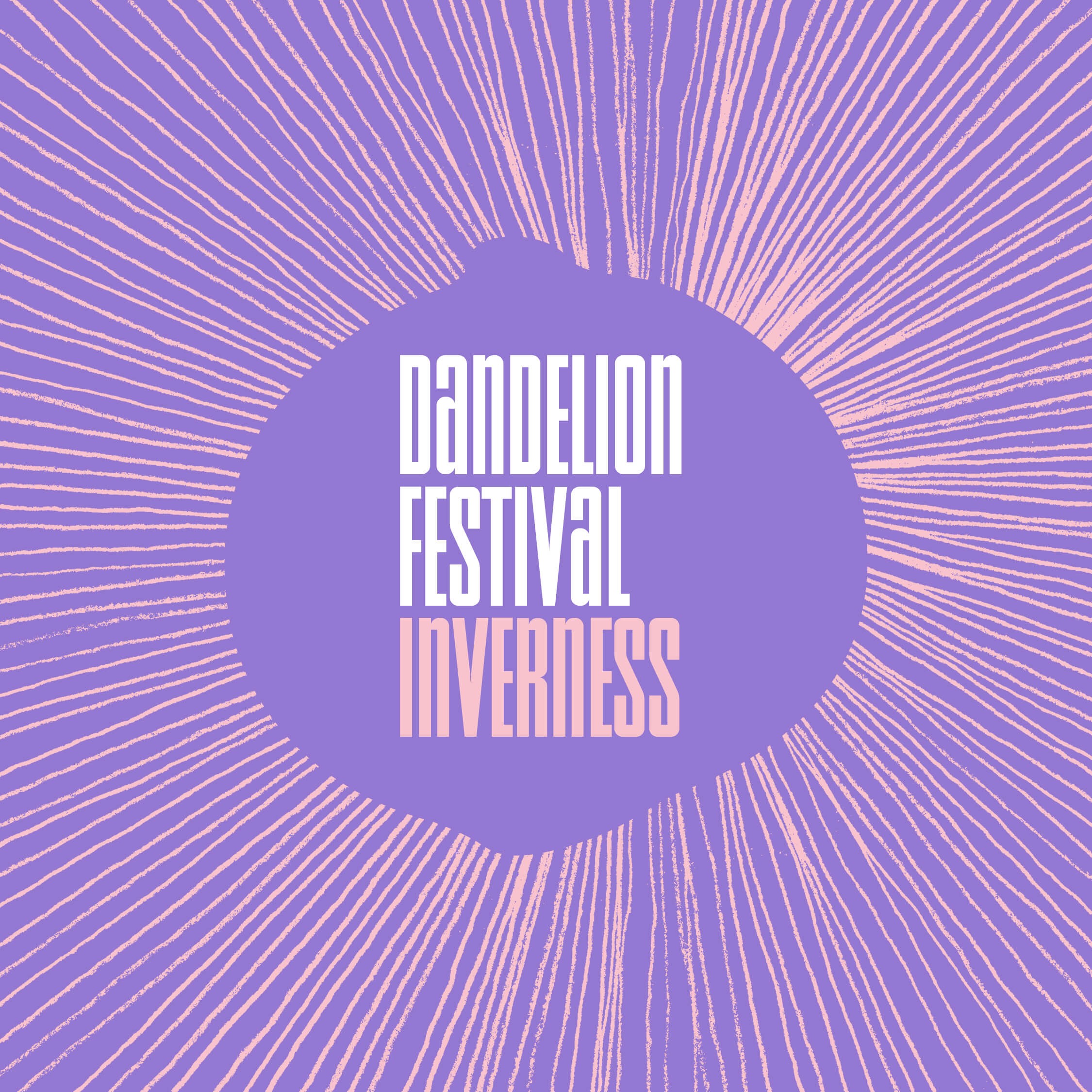 Following on from the hugely successful Dandelion Festival in Glasgow, which saw crowds of over 44,000 attend across the 3-day event, this will be the penultimate Dandelion Festival taking place in Inverness’s Northern Meeting Park. This three-day spectacle of live music, performances, talks, workshops and food is open to everyone and completely free!

Enjoy live music across three stages – including the Pavilion of Perpetual Light, a spectacular 10-metre vertical farm and concert platform made from dozens of Cubes of Perpetual Light, and the intimate in-the-round Orchard Stage. Listen to talks by leading scientists, chefs, artists, activists, and others on issues such as sustainability, climate action and food poverty. Join in inspiring workshops, discussions and other hands-on activities hosted by charities, campaign groups and community organisations. 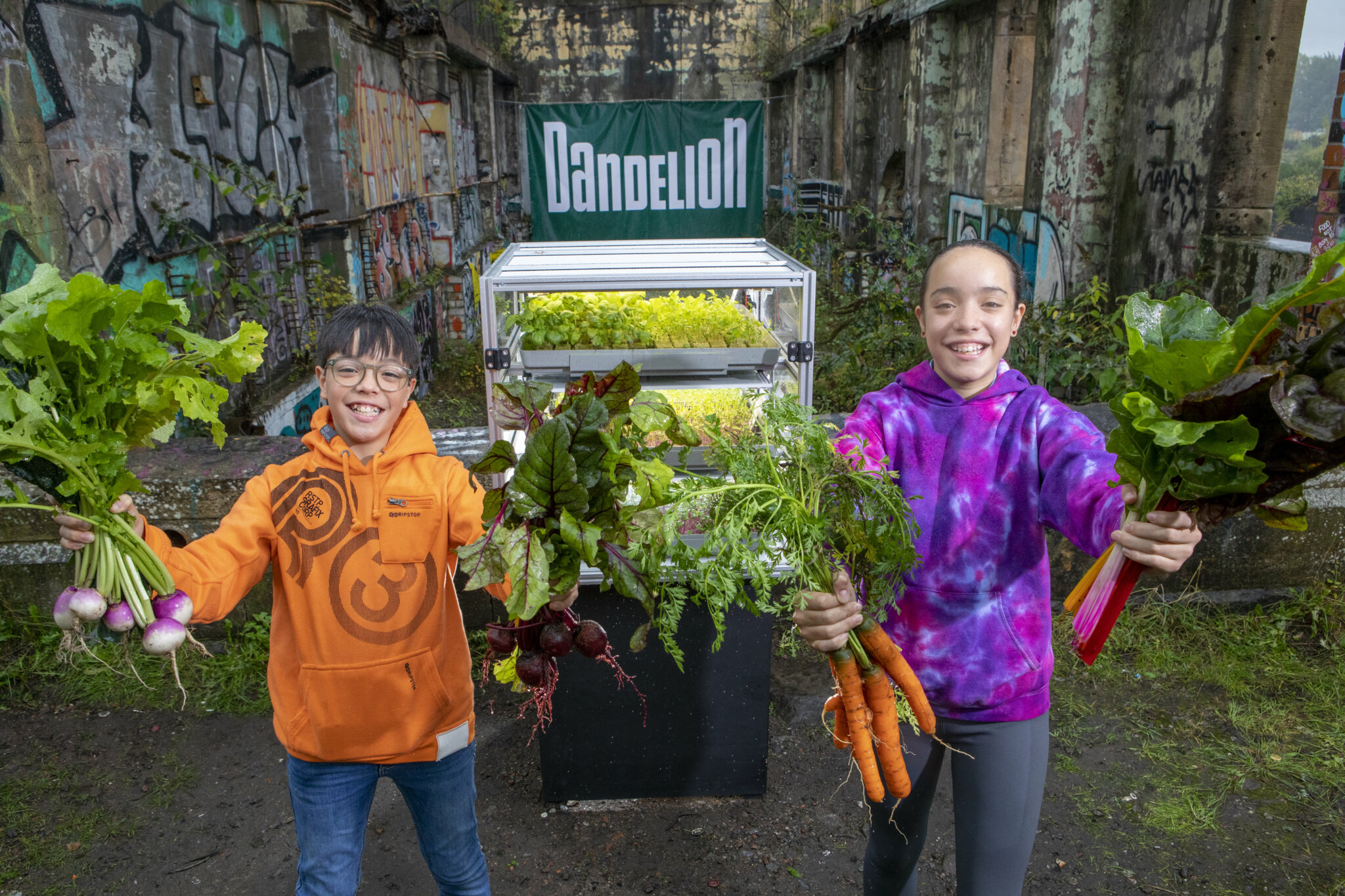 To mark the end of the growing season, Dandelion invites growers to join in with your family, friends, neighbours and communities for a long weekend of activities and Harvest-themed parties. There will be events and gatherings held across Scotland with a range of interesting, fun and educational things to get involved in.

Enjoy live music and lively conversation, games, activities and more as we all come together to celebrate harvest and growing. 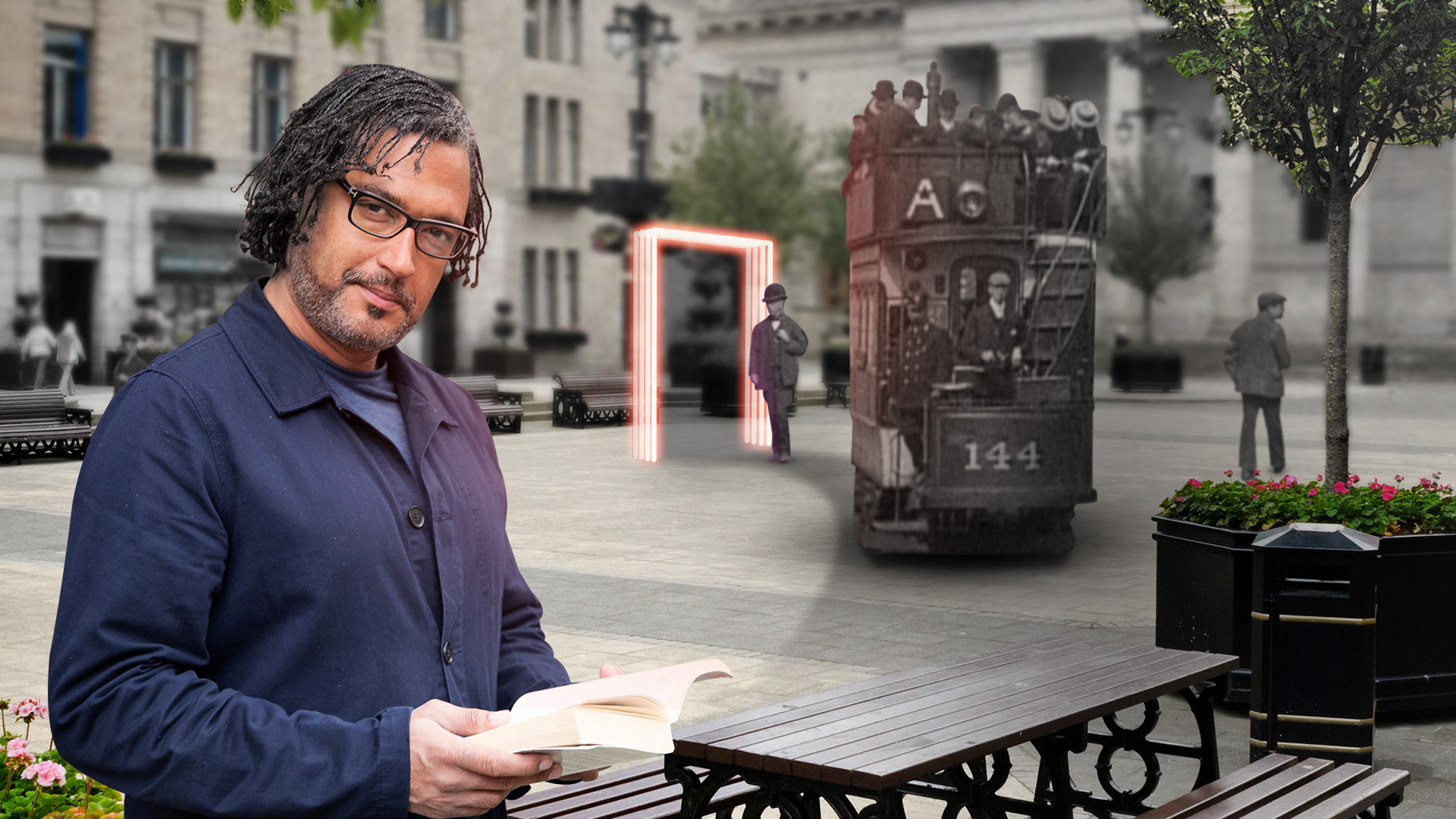 StoryTrails arrives in Scotland with two free live events taking place from 7 – 8 July in Dundee and 12 – 13 July in Dumfries, as part of a tour of 15 towns and cities across the UK this year.

Head to Dundee Central Library and Ewart Library in Dumfries, as well as on the streets of the towns themselves, to experience digital experiences that allow people to explore their town in completely new ways through the magic of AR, VR, and immersive cinema.

In Dundee, the trail follows the story of two of Dundee’s sporting heroes, Dick McTaggart, who in 1956 won an Olympic gold medal in amateur boxing, and Sarah ‘Cissie’ Stewart, who won Dundee’s first Olympic medal in 1921 for swimming. Both athletes achieved Olympic glory, yet it was only Dick that was recognised on his return from the Games. In Dumfries, the trail celebrates the town’s 90-year tradition of crowning a ‘Queen of the South’ at the annual Guid Nychburris, or Good Neighbours, Festival.

Don’t worry if you can’t get to the locations, the trail will still be available digitally for 6 months after the location’s date. All you need is to download the StoryTrails app on an up to date smartphone and you’re good to go! There is also an ‘at home’ version so that no matter where you are you can experience and enjoy StoryTrails. 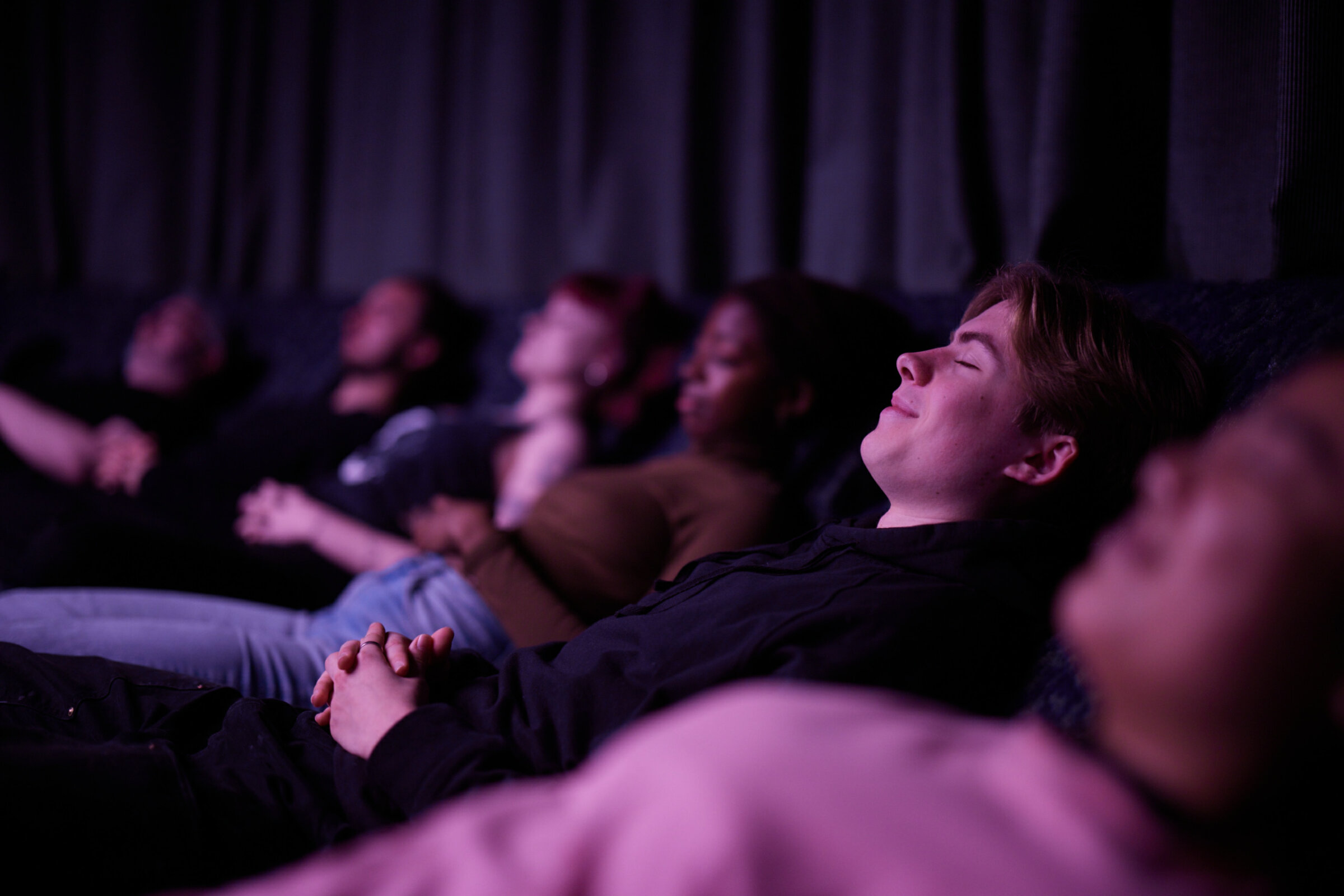 Presented by international festival, Edinburgh Science and Collective Art, Dreamachine is an artwork ‘seen’ with your eyes closed that explores the limitless potential of the human mind – both a collective experience and unique to every individual.

Dreamachine was inspired by artist Brion Gysin’s little-known 1959 invention – the ‘Dream Machine’ – a homemade, flickering light device that created vivid illusions, kaleidoscopic patterns and explosions of colour in the mind of the viewer.

Enter an immersive environment of light and sound, immerse yourself in a unique and unforgettable experience as you close your eyes to experience vibrant, colourful imagery, as rich as any digital simulation, but created by the magic of your mind. 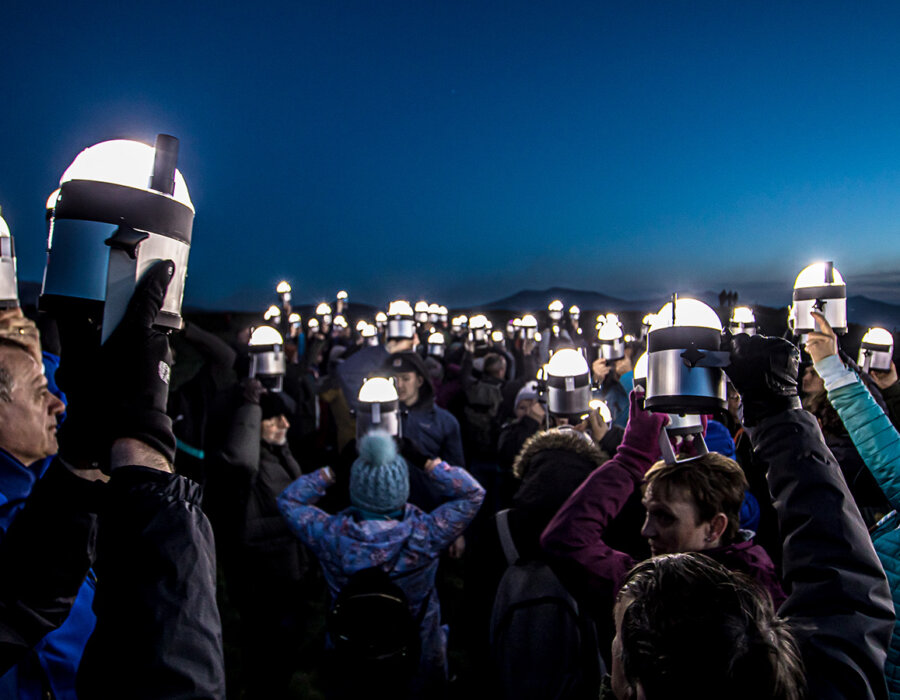 Thousands of people across the UK, including over 1000 people in Scotland, are being recruited to create large-scale outdoor artworks for Green Space Dark Skies in 20 of the UK’s most outstanding landscapes.

In Scotland, the events will take place in some of the country’s most stunning locations including the Cairngorms National Park (11 Aug), North Ronaldsay (16 Aug), Orkney (20 Aug) and Ben Nevis (10 Sept).

The gatherings will be created at dusk by local participants, referred to as Lumenators. They will be guided along pathways or waterways carrying smart lights that will enable digital choreography to be captured on film, while also being sensitive to the night-time environment. Each short film will incorporate the stories of the people and places featured and will be broadcast online after the event.

Note: The North Ronaldsay event is by invite only to local residents.