It’s not the destination, it’s the journey goes the old adage. It may be a well-worn cliché, but when that journey finds you road tripping on the best scenic drives in Scotland, it’s hard to think of a truer statement.

In fact, Scotland’s driving routes could be key to unlocking your spirit of adventure. From a practical standpoint, it’s arguably the most liberating way to travel. Think about it. No stressful races to the airport, cumbersome baggage allowances, queues or frustrating delays. On a road trip you can feel free to explore at your own pace, pull over at wherever takes your fancy, and simply pick up where you left off and continue on your way. All you need is a full tank of fuel, your preferred navigation device-slash-app, a killer playlist, and you’re all set.

Thinking about hitting Scotland’s roads this summer? Let us steer you in the right direction with five of Scotland’s best drives.

Learn more about driving in Scotland and discover all 17 of Scotland’s road trips. 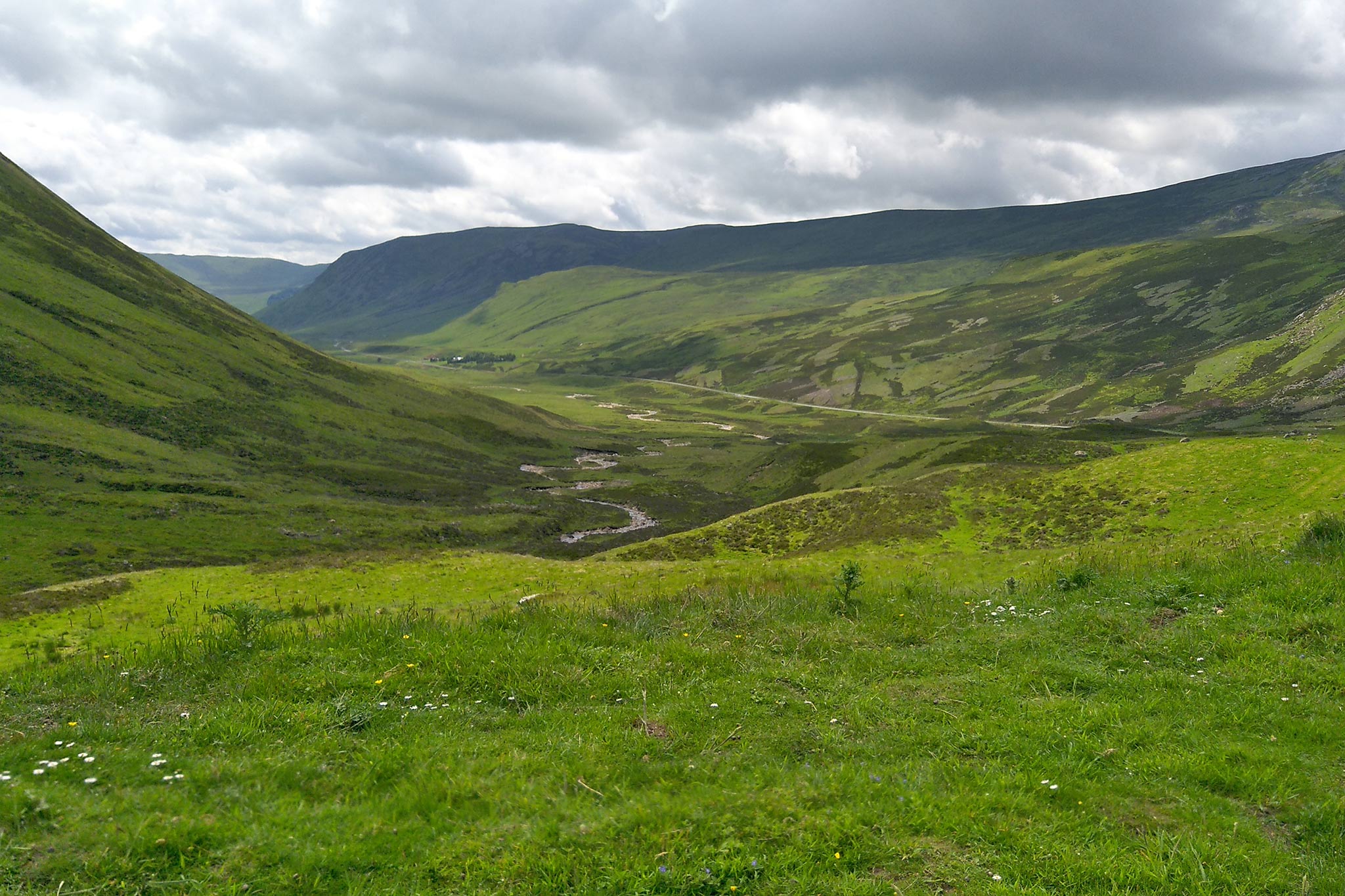 The Snow Roads Scenic Route is one of the newest additions to the best driving routes in Scotland. Officially launched this year, this stunner of a route weaves through the outstandingly beautiful landscapes of the eastern Cairngorms as well as the charming Highland towns of Royal Deeside including Braemar, Ballater and Tomintoul. Scaling the highest public road in Great Britain – the eponymous Snow Road – this driving route offers everything from castles to distilleries, tumbling waterfalls to free-roaming herds of deer. It’s also a dream to Instagram. Pull over at its three ‘Scenic Route Installations’, outdoor artworks that merge seamlessly with the surrounding landscape and are designed just so to allow you to capture that perfect shot.

Find out more about the Snow Roads Scenic Route. 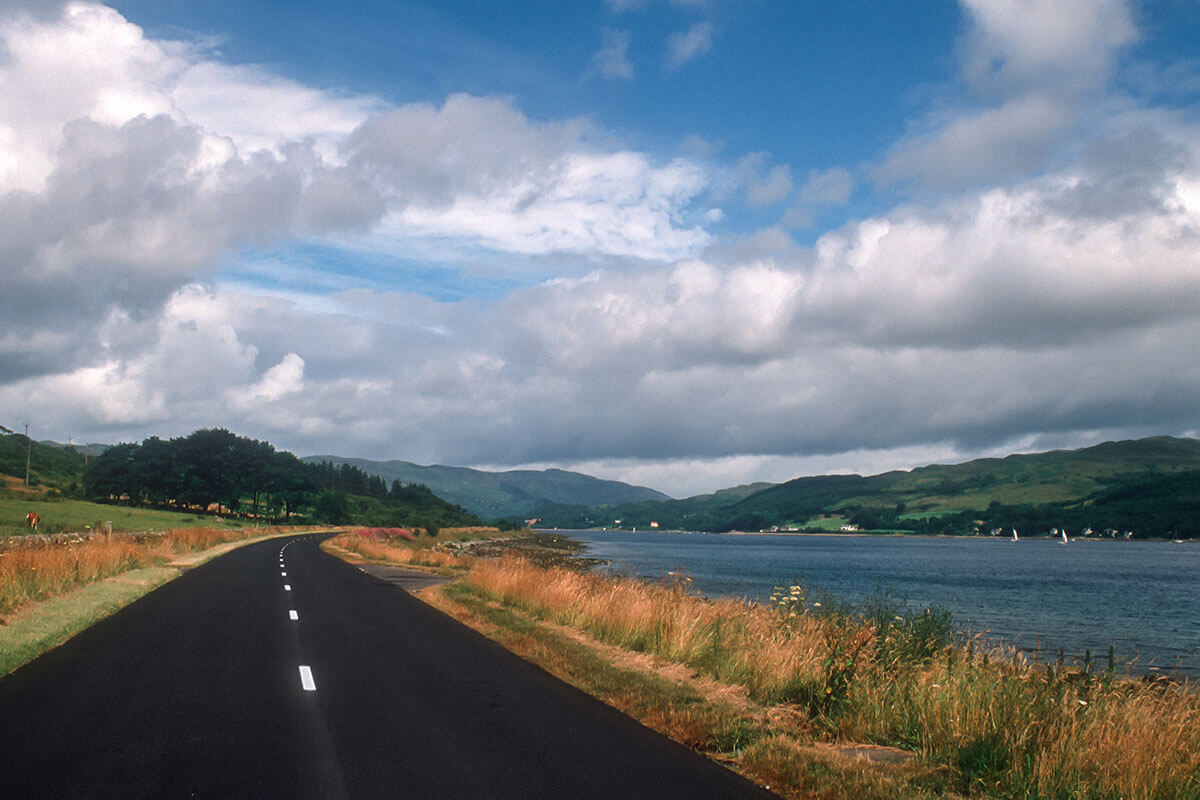 The Argyll Coastal Route is one of the best roads in Scotland. It is said that the enchanting Argyll boasts more coastline than the entire country of France! Spanning Tarbet to Fort William, its seemingly endless coastal fringe of mist-shrouded bays and fjord-like inlets seeping into the shoreline against a backdrop of majestic mountains, is nothing short of breathtaking. Get out from behind the wheel to enjoy an iconic castle, a lochside oyster bar, a wildlife spotting boat tour and Loch Lomond’s bonnie banks.

DETOUR ALERT: Explore a relatively undiscovered corner of the country known as Argyll’s Secret Coast. This wonderfully secluded stretch of coastline easily ranks alongside Scotland’s more popular driving routes for sheer scenic drama. Located just two hours driving time from Glasgow, follow this road on the way to the Kyles of Bute and Loch Fyne and marvel as a wilderness of rugged mountain terrain, romantic glens and lush forests unfolds before you. Amid the natural splendor on show, you’ll also find charming historic villages, delectable seafood, empty beaches, and plenty more surprises along the way. 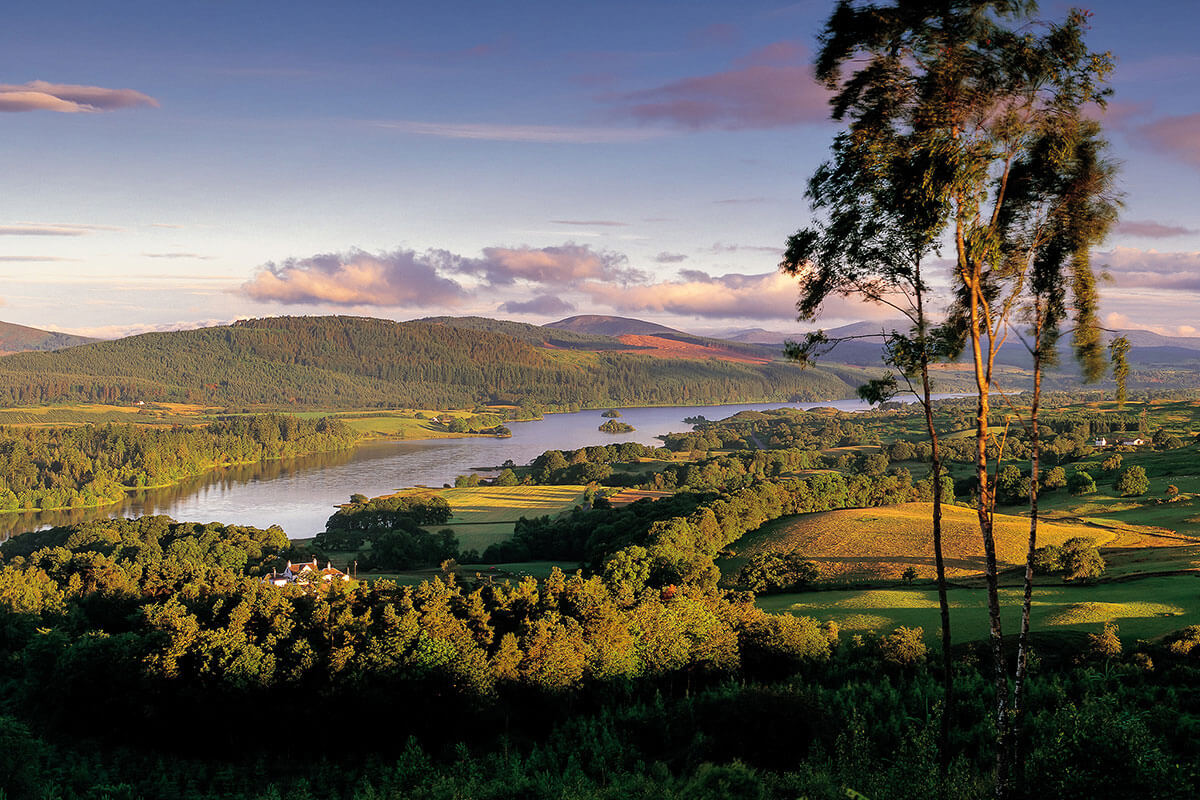 Spanning the towns of Gretna to Ayr,  follow one of the best scenic drives in Scotland on this gently meandering route. The Galloway Tourist Route cuts through Scotland’s most pastoral and temperate region and is as appealing to culture vultures as it is to adrenaline seekers. Its quiet and gently undulating country roads are perfect for a leisurely drive with plenty of diverting attractions and activities interspersed throughout. Explore the life and poetry of its most famous son at the Robert Burns Birthplace Museum, witness the aerial spectacle of birds of prey swooping and diving on the Galloway Kite Trail, or take a boat out to the ruined island fortress of Threave Castle. The mountain bikers’ paradise of Dalbeattie 7Stanes also beckons, not to mention Galloway Forest Park with its myriad of walking routes and cycle trails. 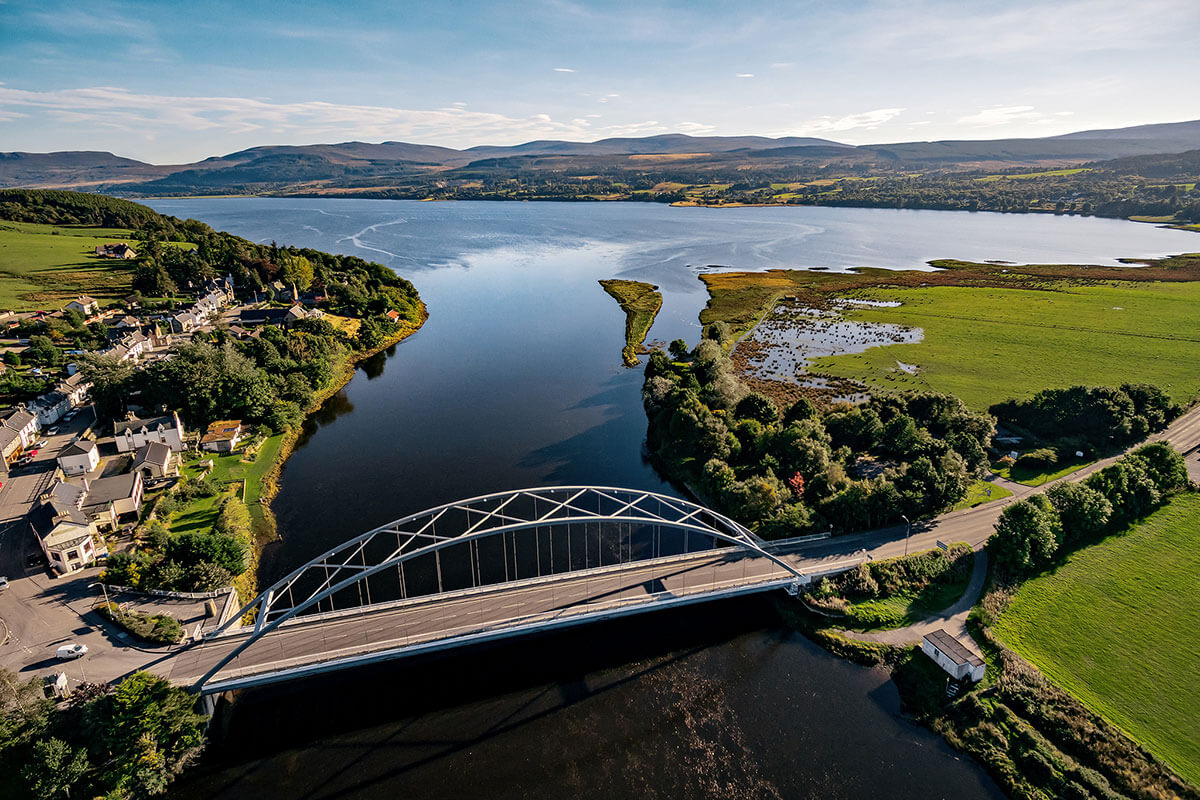 End: The Mound on Loch Fleet

Twisting and turning across a backdrop of ancient crags, brooding mountains and glittering coastal waters under an every-shifting sky, the pull of the North Highlands is a powerful one. Follow the Moray Firth Route into one of Scotland’s most atmospheric and untouched places. Gaze upon the wild beauty of Easter Ross and Sutherland, breathe in the bracing sea air of the Beauly, Cromarty and Dornoch firths, and hear the deafening roar of the cascading Rogie Falls. Trace its past at fascinating heritage sites like Beauly Priory and discover its thriving present at places like Black Isle Brewery where organic beer, home-grown in the Highlands, is produced today. 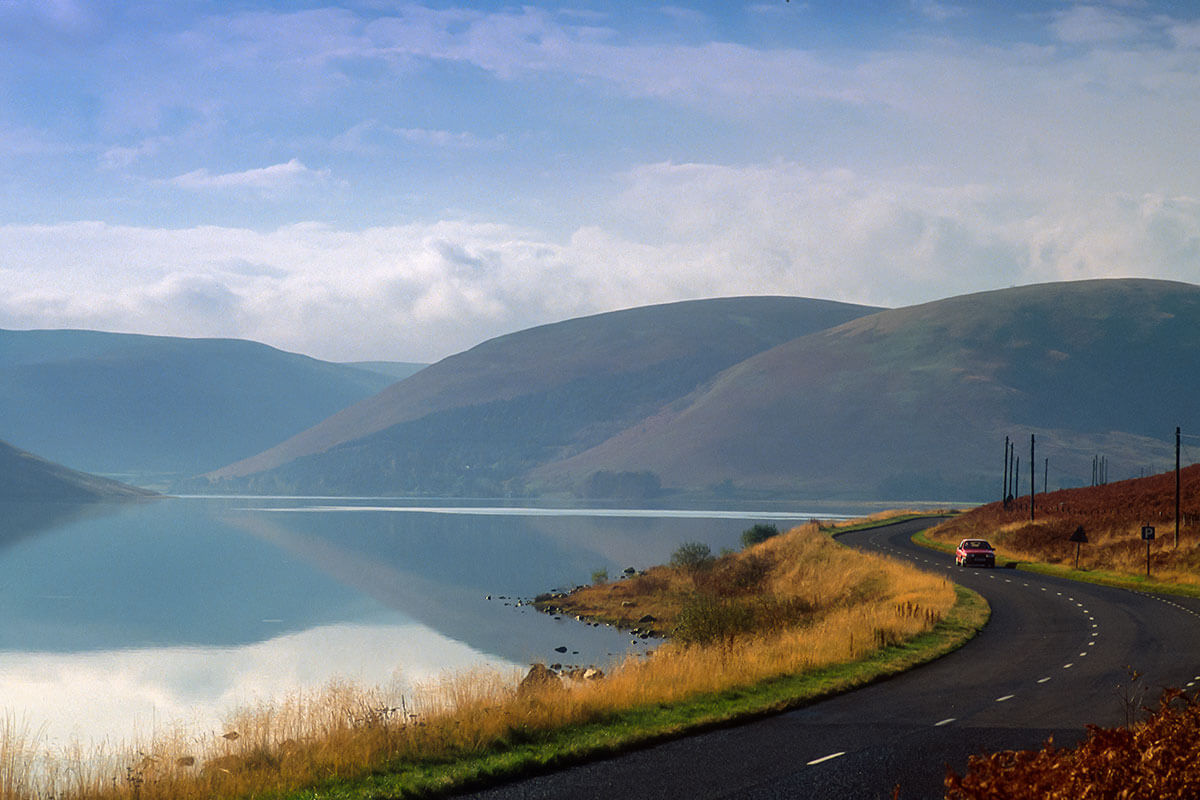 Heading up to Edinburgh? Follow generations of eloping couples to Gretna Green before continuing onwards into the heart of Sir Walter Scott country. Weave through a bucolic countryside strewn with immense ruined abbeys, castles and country houses which hark back to a storied and sometimes turbulent past filled with fierce clashes, fair damsels and daring heroes. Swing by Scott’s beloved home of Abbotsford, watch authentic tartan and tweed woven from scratch at Lochcarron of Scotland and the Borders Textile Towerhouse, and make a very worthwhile stop at a special independent craft brewery on the outskirts of of the capital.

Theses are just some of the best driving routes around Scotland you can explore. Find out more about the variety of scenic driving routes in Scotland and our other top picks for can’t-miss scenic drives and start planning your next trip now.

You can even extend your trip by combining one of the fantastic itineraries featured in our Stay A Wee Bit Longer guide.

Dennis’ Big Day Out in Aberdeen