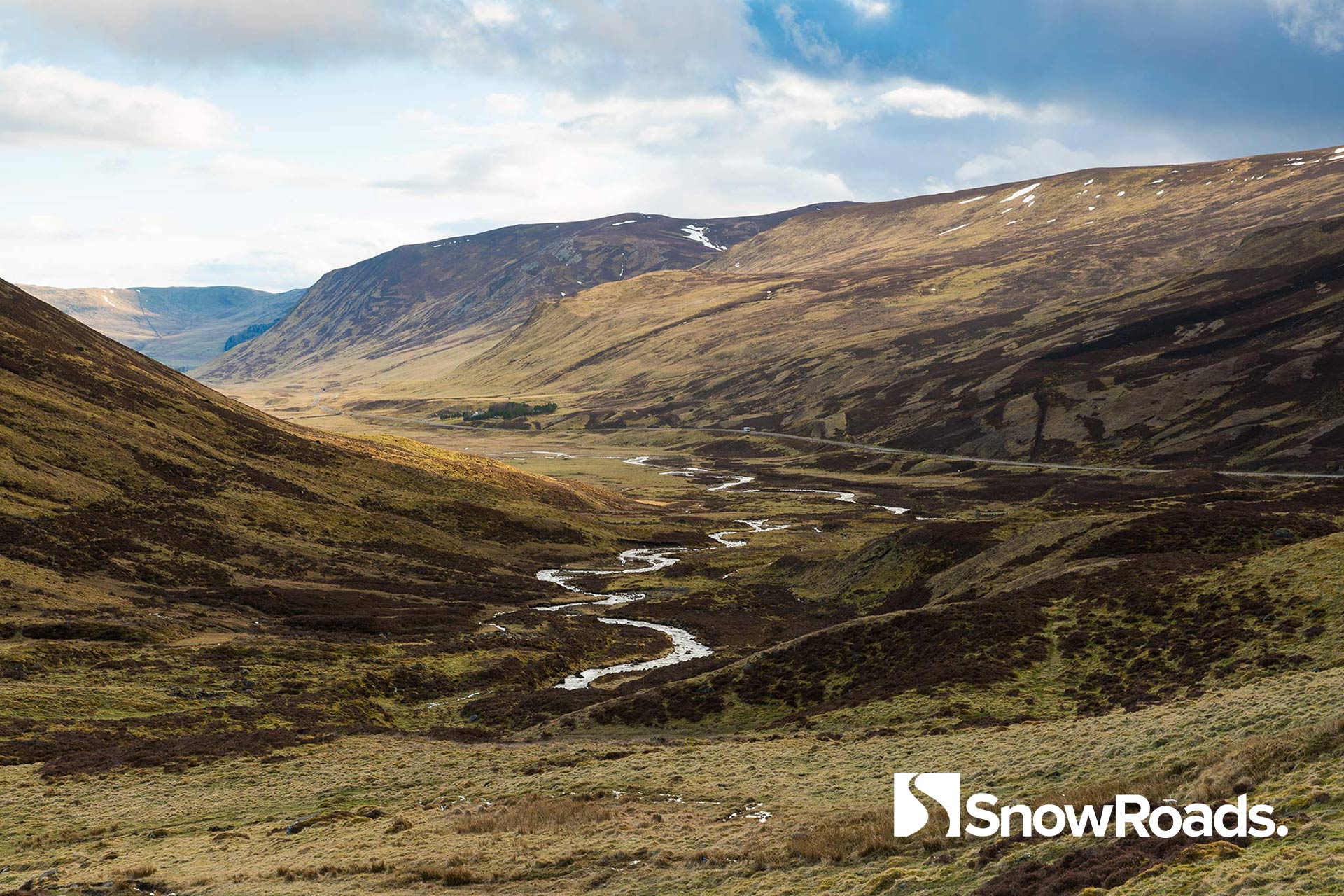 Spanning 90 miles of snow-capped peaks, rugged glens, outdoor adventures, cycling and delicious food and drink; the Snow Roads Scenic Route is a distillation of the finest elements of the Cairngorms National Park. Running through the eastern portion of this magnificent landscape, the route owes its name to the highest public road in Britain, and boasts some of the wildest, most dramatic Highland scenery imaginable. It’s also a route where you’re invited to really take your time to soak in the views, villages and nearby attractions.

So if you’re looking for a more leisurely alternative to increasingly busy routes like the North Coast 500, get ready. Here is a taster of what waits for you on one of the best kept secrets in Scotland’s road trip arsenal.

1. Epic scenery and so much more

As Britain’s largest national park at slightly more than 1,650 square miles, ‘epic’ doesn’t even begin to convey the sheer scope and majesty of this expanse which stretches across the Scottish Highlands and Aberdeenshire. Fortunately, the Snow Roads gives you the chance to experience the natural grandeur of the place in the space of an afternoon, if you choose. 90 miles in length, it may be relatively short compared to other driving routes through Scotland, but it manages to pack an impressive amount of things to see and do along the way.

There are whisky distilleries including Balmenach and Royal Lochnagar; fairytale castles from Corgarff to the private home of Her Majesty, Balmoral, and even the snowsports destinations including Glenshee Ski Centre and The Lecht. From gentle ambles to the haunting ruin of the Well of Lecht to the myriad of footpaths in and around the Burn O’ Vat Visitor Centre, the Snow Roads offers plenty of short, easily accessible detours during the course of your journey. 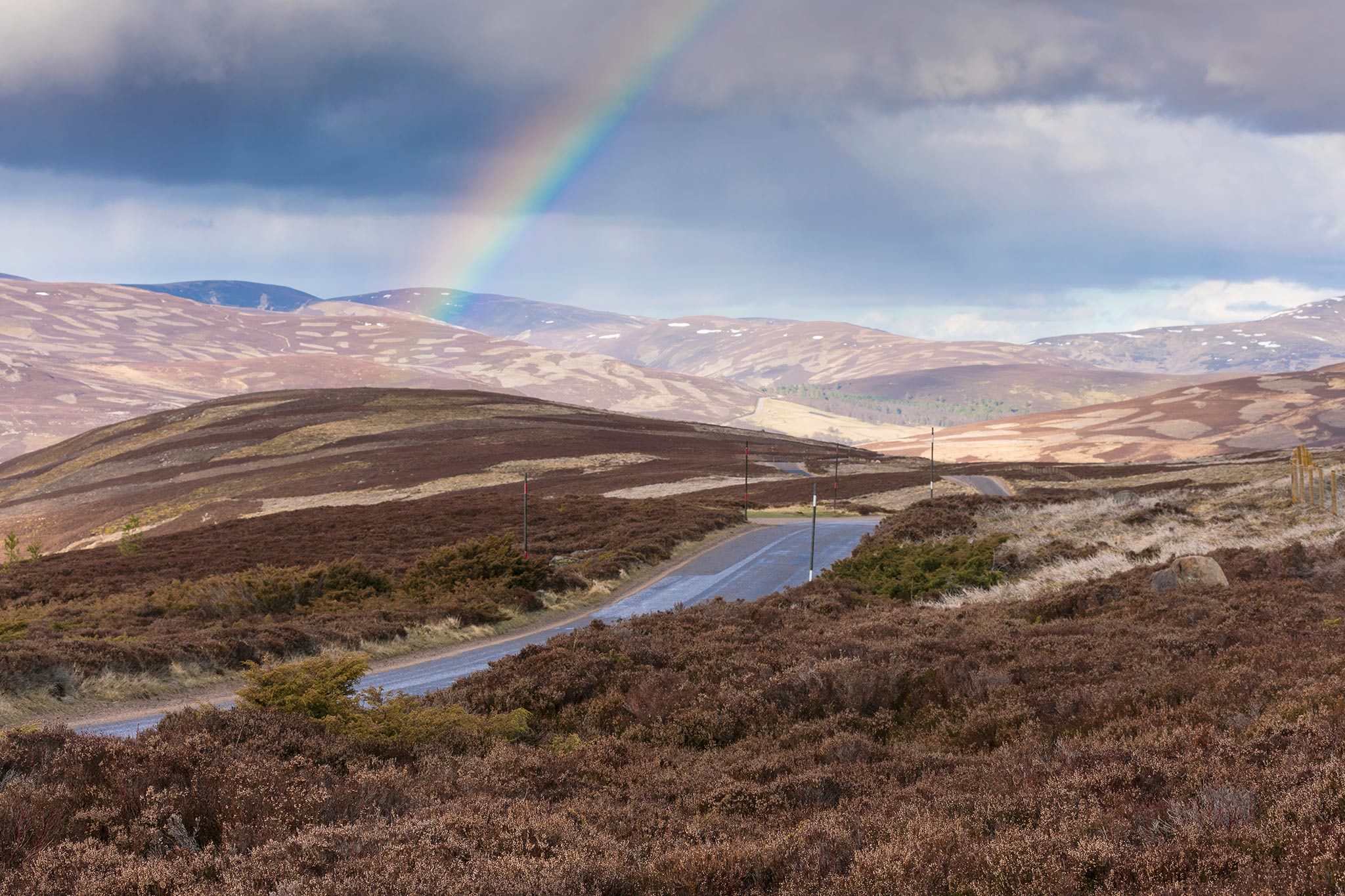 The road from Corgarff to Crathie in the Cairngorms National Park

The famous Scottish weather can be at its most changeable in the Highlands. This is especially true on the route taken by the Snow Roads which reaches a dizzying height of 670 m (2199 ft) at the Cairnwell Pass. Azure blue at times with bright sunshine bouncing off snow-capped mountain tops, turbulent and filled with moody cloud formations at others, no matter the time of year the sky takes centre stage in this part of the Cairngorms. Even on rainy days, the Snow Roads still manage to surprise, from vivid, sudden rainbows appearing out of nowhere and atmospheric mists that drape over the landscape. 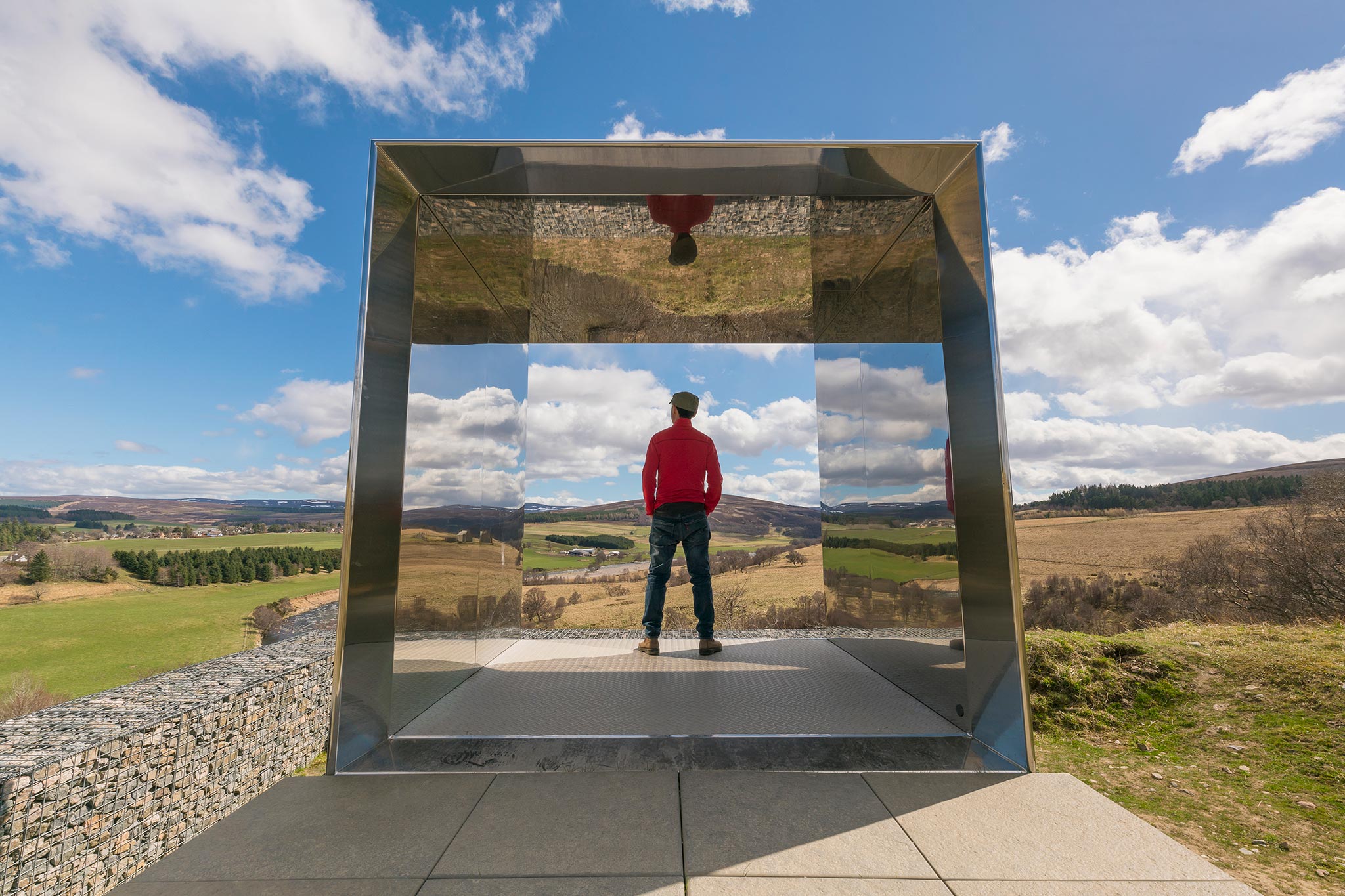 ‘Still’  by Angus Ritchie near Tomintoul. The first of three specially designed viewpoints along the route

Striking and thought-provoking, the lay-bys that line the Snow Roads Scenic Route aren’t what you would expect. Designed by acclaimed architects, these man-made vantage points also serve outdoor sculptures, beautifully framing and merging seamlessly with the sweeping valleys and distant mountains all around. The sight of them silhouetted against such dramatic natural backdrops is really something. First up is Still (above) by Angus Ritchie. Pull over, hop out and commune with nature. 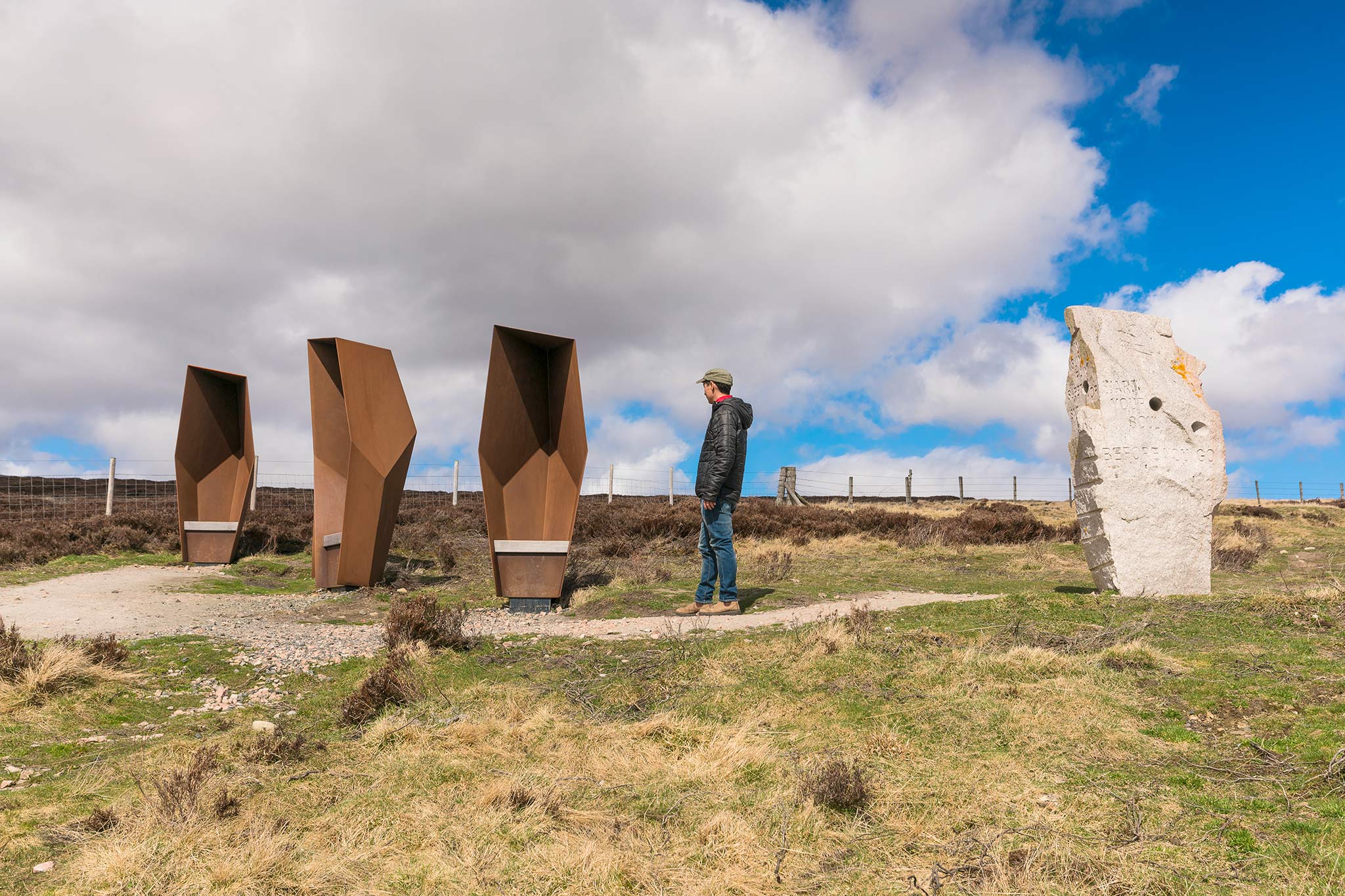 ‘The Watchers’ by John Kennedy at Corgarff. The seats stand at over 2.2 metres in height and feature a hand-crafted seat made from Scottish Larch

4. Sit back and relax

As we already explained, the Snow Roads offer a relatively compact road trip that can easily be completed in the space of the day. It’s also unique in that it provides spaces where visitors can properly sit, be still and fully immerse themselves in the surrounding splendour. Two of the route installations, The Watchers by John Kennedy (above) and Connecting Contours by Daniel Smith and Philip Zoechbauer, incorporate seating where you can take a break from behind the wheel and breathe in the revitalising mountain air. 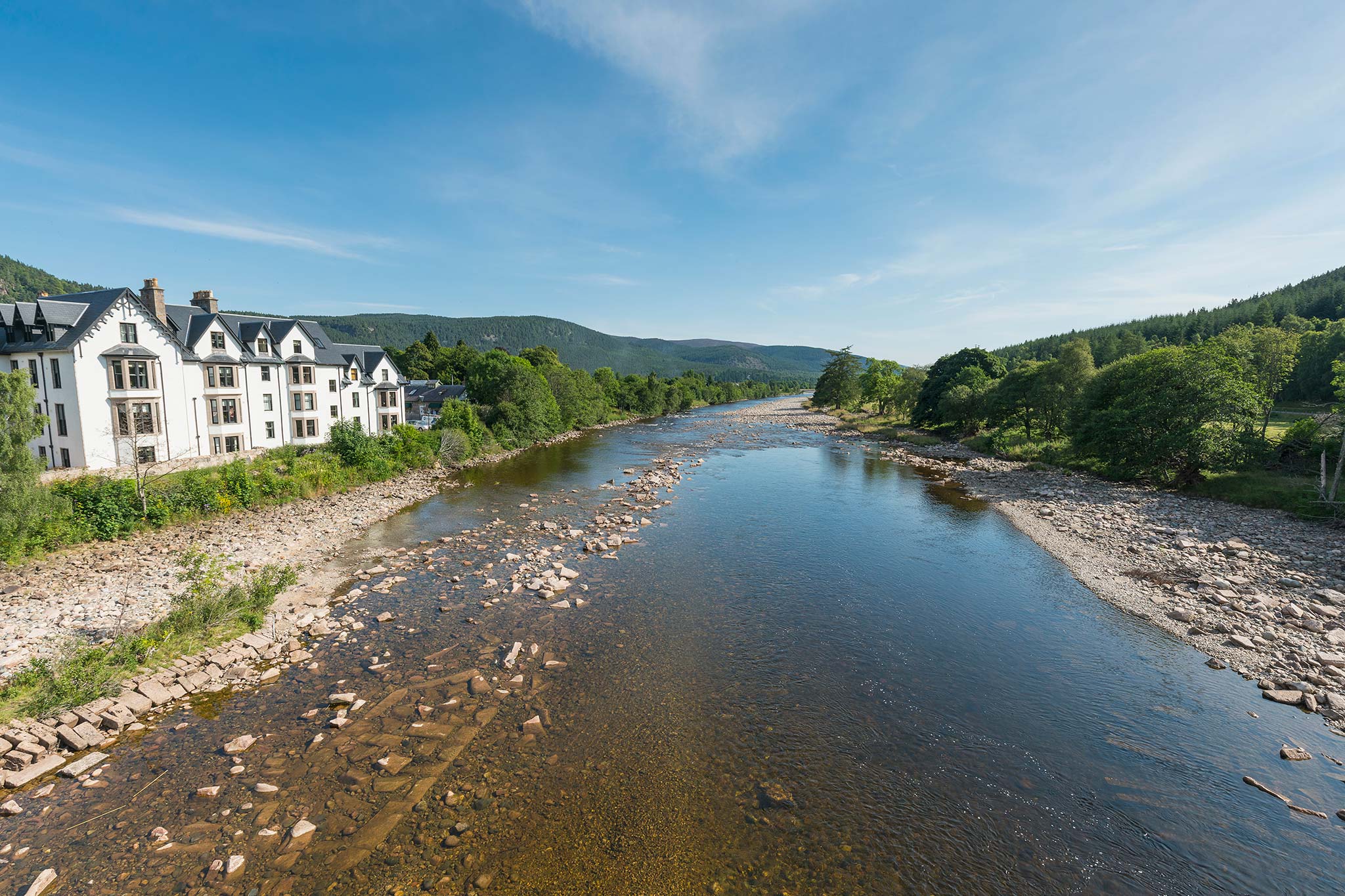 The River Dee seen from the Royal Bridge at Ballater

It may be just 90 miles in length, but the Snow Roads isn’t a route you can just zip around. Steep climbs, ‘blind’ summits, sharp twists and bends, and single-track roads feature frequently, so be sure to drop your speed and drive with extra care. Embrace the slower pace and take the time to soak in the extraordinary views and give yourself plenty of time to explore the various attractions along the way. You can even extend your journey by an extra day or two and get out and really explore this lesser-known corner of the Cairngorms National Park. 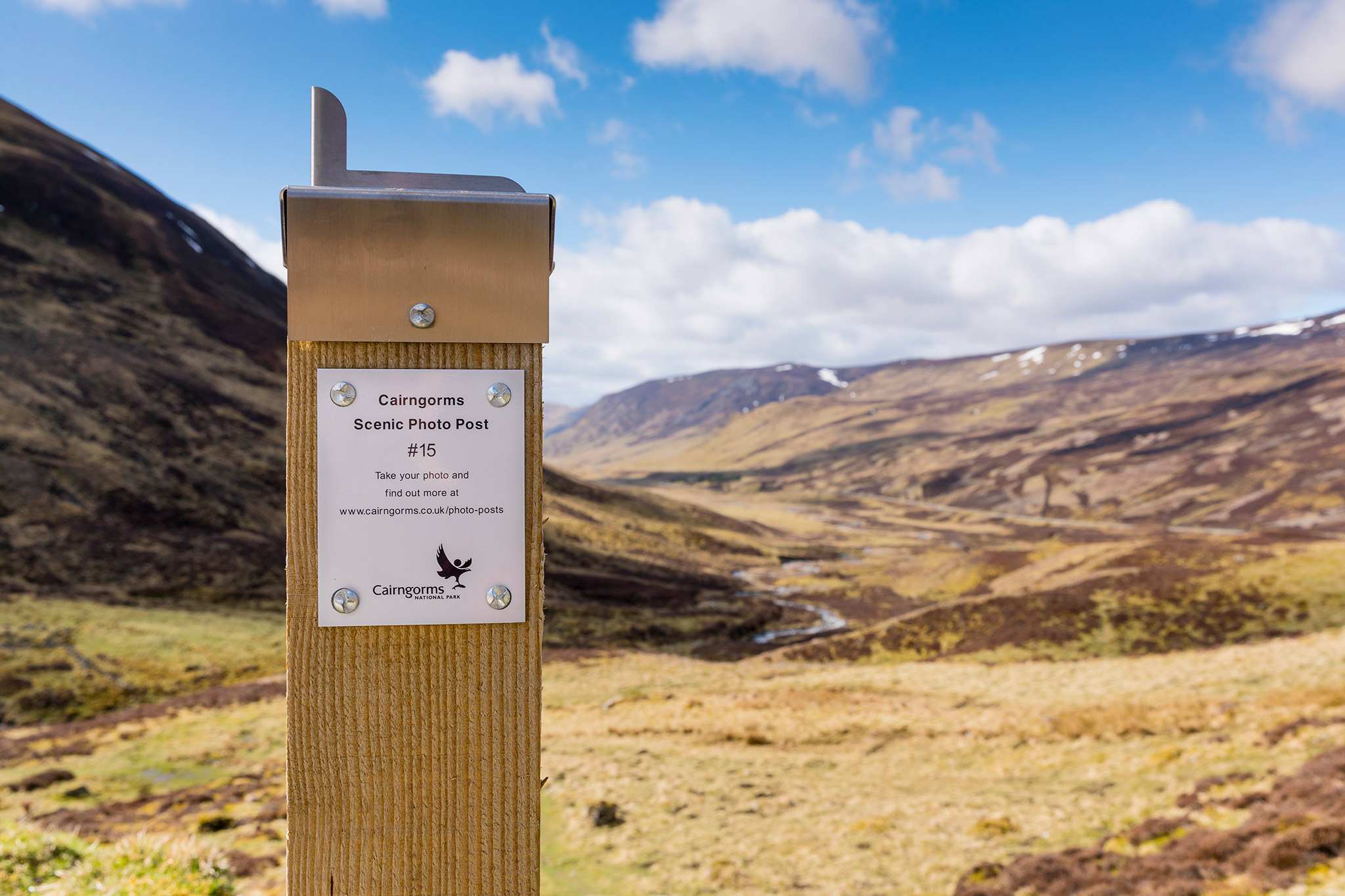 Practically each way you turn along the Snow Roads reveals a picture-postcard vista, but we all know there’s no better way to share your road tripping adventures than with a perfectly ‘grammed’ snap captured on your smart phone. Prepared for all you obsessive Instagrammers out there, the third and final installation, Connecting Contours, as with the other vantage points, features a perfectly situated stand where you can expertly position your device or camera and take an envy-inducing shot from the infamous ‘Devil’s Elbow’ looking down into Glenshee. Don’t forget to tag #snowroads. The route also boasts its own app adding an extra dimension to the Snow Roads experience. 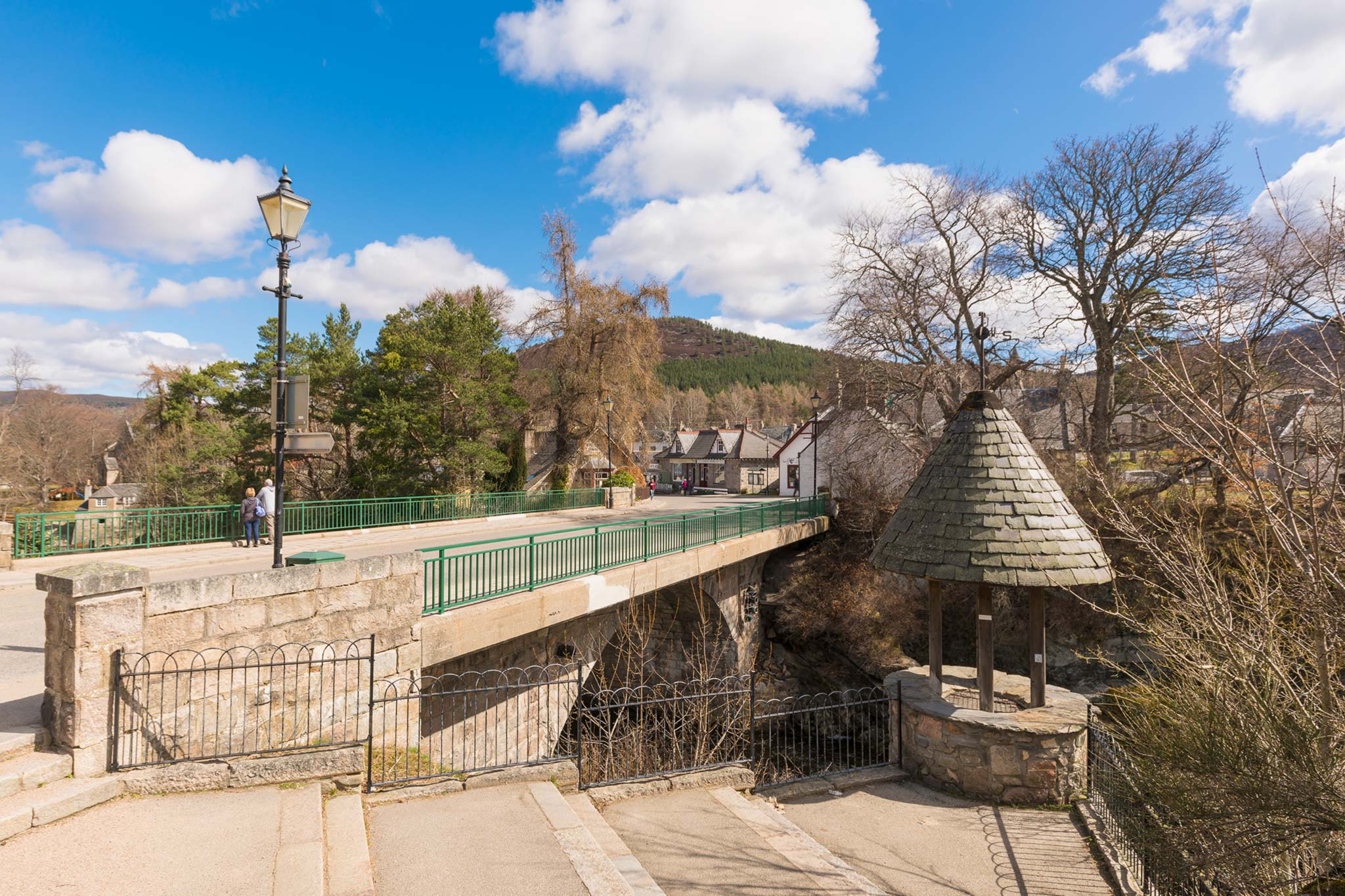 The Bridge over the Clunie Water in Braemar

There is no shortage of quaint villages and quintessential Highland towns to take in along the route. Starting in Blairgowrie and finishing in Grantown-on-Spey, the route passes Tomintoul before heading deep into the heart of Royal Deeside, clocking up Braemar, Balmoral and Ballater along the way. Wander these elegantly planned Georgian and Victorian communities with their independent shops, pubs and restaurants, and heritage sites. Ballater and Braemar are steeped in royal connections. Check out the many shops in both towns proudly displaying Royal Warrants that signify them as suppliers to the Queen, or pay a visit to Crathie Kirk, the church where the Royal Family have worshiped for generations. 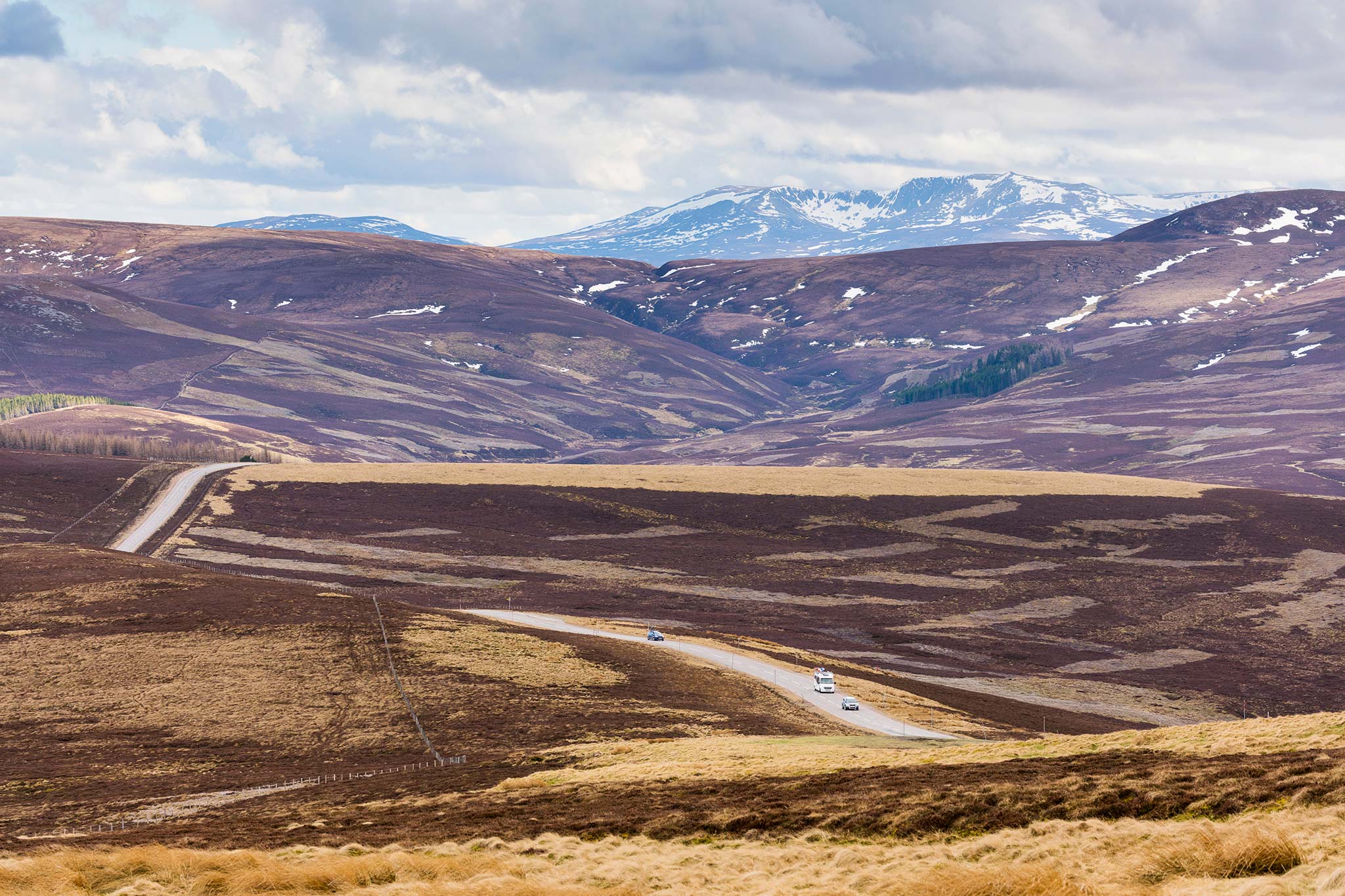 The Snow Roads provides access to many excellent walking routes throughout the wider park and Tomintoul, for instance, is an ideal base if you want to visit the Glenlivet Estate with over 100 miles of walking and biking trails. Seasoned walkers meanwhile can set out from Braemar to explore the rugged cattle drovers’ trail through the Lairig Ghru mountain pass to Glenmore and onto Speyside. The starting point along the route, Blairgowrie, also happens to be the start and finish point for the Cateran Trail, a circular 64-mile waymarked path that winds through the mountains around Glenshee on the southern fringe of the Park.

Discover other walking routes you can take from the Snow Roads. 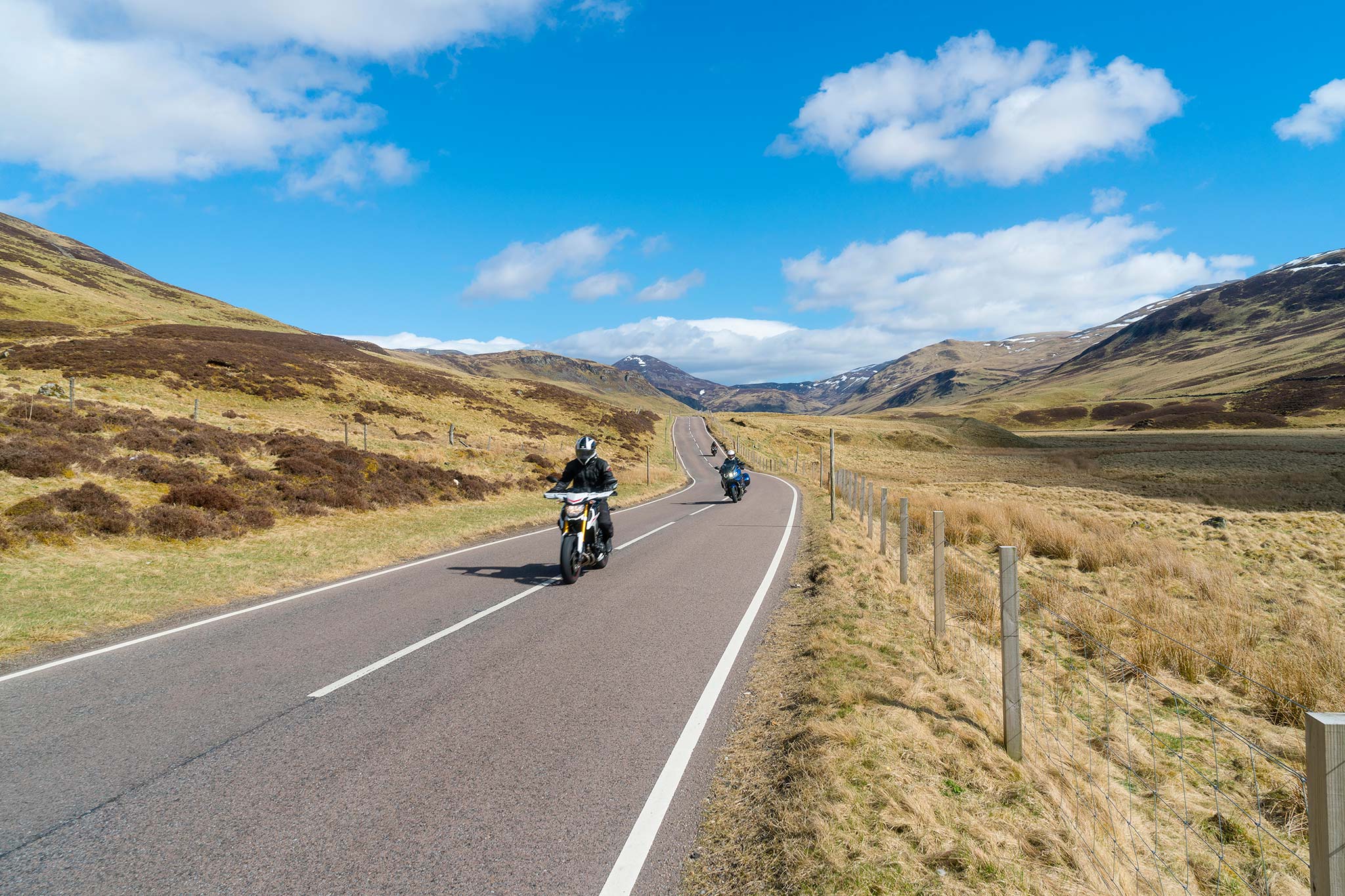 Motorcyclists on the Spittal of Glenshee

It isn’t necessarily for the faint of heart – the highest public road in Britain and long stretches of near-constant uphill terrain would test even the strongest cyclists – but the Snow Roads has much to offer cyclists. The Lecht, for instance, may be a tough climb from Cockbridge to the ski resort of Lecht, but the views from the summit are simply unrivaled by any other cycling route in Britain. Then there are sections of the Deeside Way, which you can join in Ballater, and follow the original route of the Old Royal Deeside Railway all they way to Aberdeen. Or explore further afield on the Speyside Way via the 15 mile spur leading from Tomintoul and onward into Morayshire and the Grampians.

Check out more of Scotland’s driving routes and road trips and head to the iKnow Community for more advice.