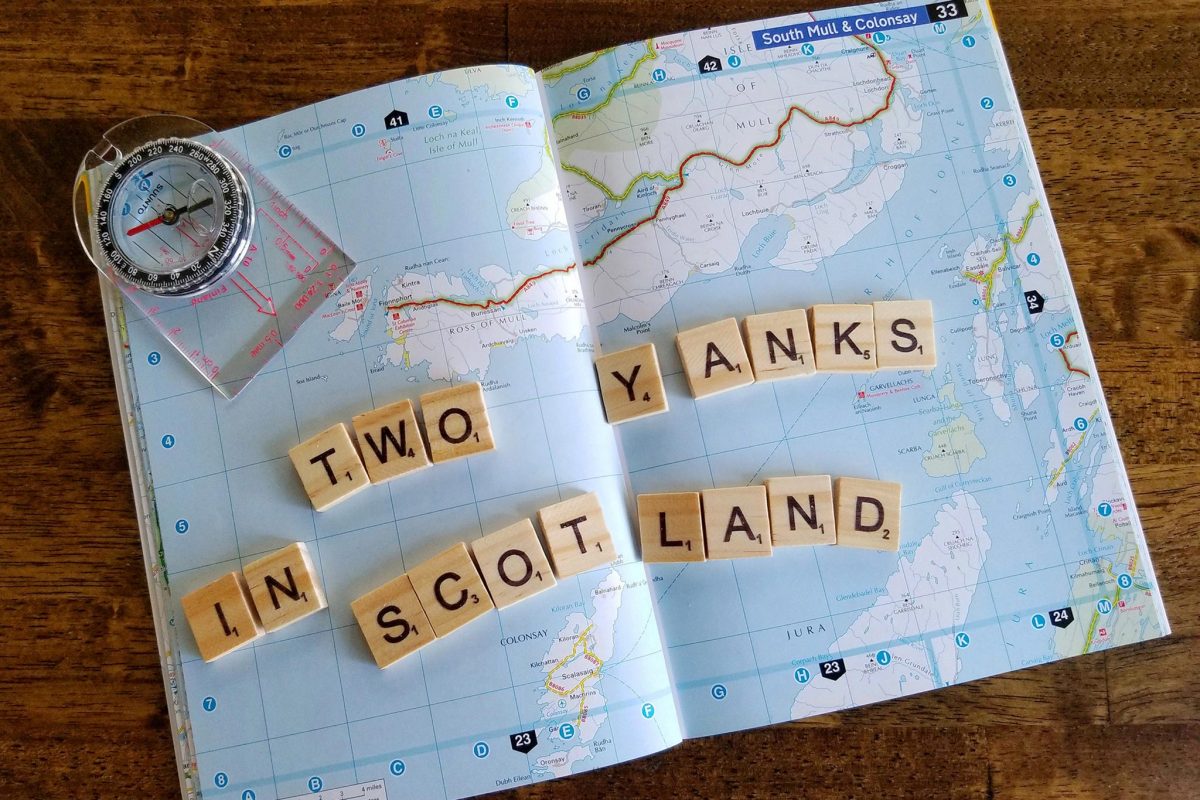 One of the most delightful Scots’ expressions is ‘Haste Ye Back’ – which translates as ‘hurry up and come back’.

In September 2016, my wife Rochelle and I took our first trip to Scotland and immediately fell in love with the country. We did a fairly long trip of 14 days, and travelled from Edinburgh all the way up the east coast. We visited Orkney, back down through the center of the country to Glen Coe, then up to the Isle of Skye, and finished our trip in Glasgow. I’m leaving out a lot here, but all told, we racked up almost 1,250 miles of driving.

During that first trip we were both posting updates and photos to our Facebook pages, and a lovely Facebook group Scotland From The Roadside, which has almost 130K members. At the end of the trip, I posted a cheeky list of ‘observations’, and it went viral. It ended up being shared, liked, and commented on hundreds of times and eventually ended up in newspapers such as the Daily Record. It was a fun 15 minutes of fame, and many responded with a hearty ‘Haste Ye Back’, which of course we were keen to do.

FAST FORWARD TO 2018: THE RETURN TRIP

So almost a year and half later, we returned to make new friends, connections and even perhaps make a few more amusing observations.

Rochelle and I were thrilled at the prospect and the helpful folks at VisitScotland gave us lots of assistance and many wonderful businesses and individuals helped us along the way as you’ll read throughout this travelogue. This was a fast paced 10 day itinerary but of course, you could set a more leisurely pace. 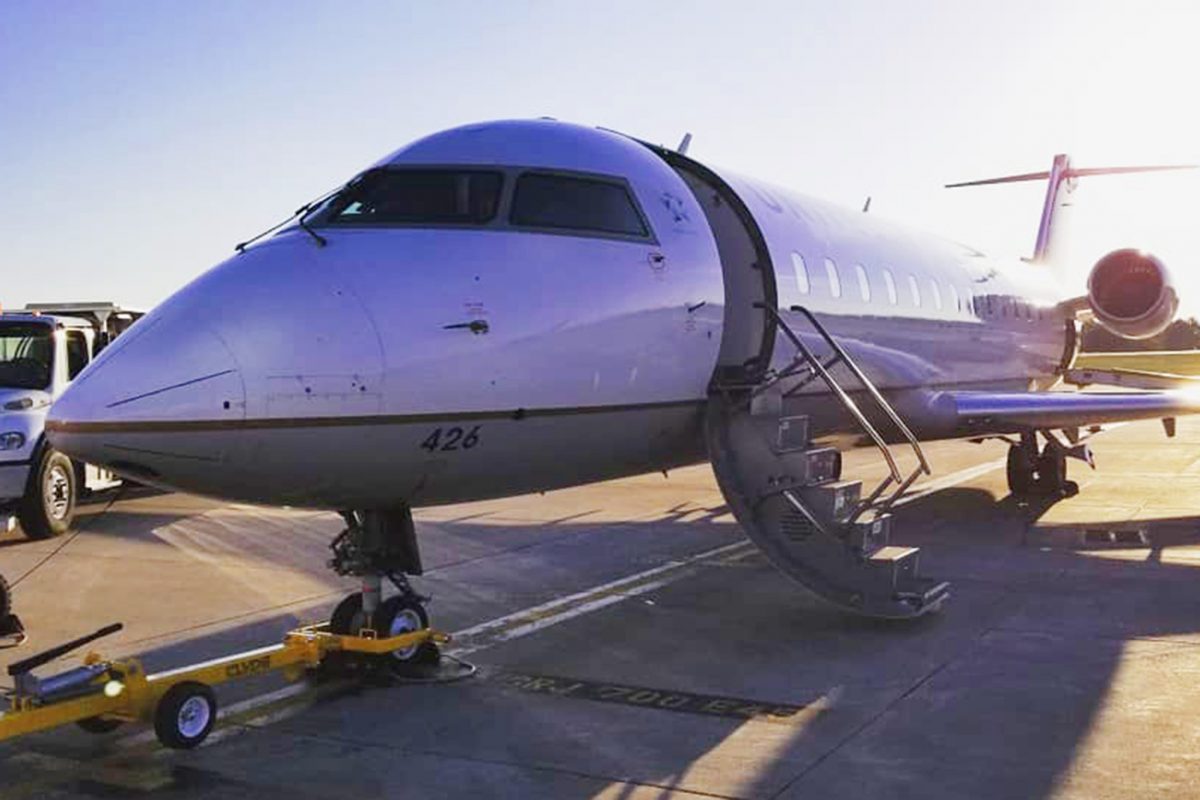 We like to call this the ‘Happy Plane’ (the plane you fly home on, the ‘Sad Plane’), and super thanks to United Airlines for the great start to our trip. This isn’t the plane we flew overseas on – simply our flight from Charlottesville to Dulles International, which only takes about 20 minutes.

The gate at Dulles was decorated with balloons, they had a piper there and each customer got a gift bag for the flight. We were very excited to be on United’s inaugural non-stop flight from Dulles to Edinburgh. For mid-Atlantic residents like us this is a great carrier to fly with and the flight is a quick seven hours (nice for a nap or two).

Ouch, jetlag always kicks my butt, but we dug right in and started our next Scottish adventure. We checked into the Adagio ApartHotel on the Royal Mile, which is fantastically placed (about half a mile, 10 minute walk) east of Edinburgh Castle. It’s on the quieter side of the Royal Mile and we really liked that. Each room is kind of a mini-apartment with a small kitchen if you prefer to self-cater. We loved it. 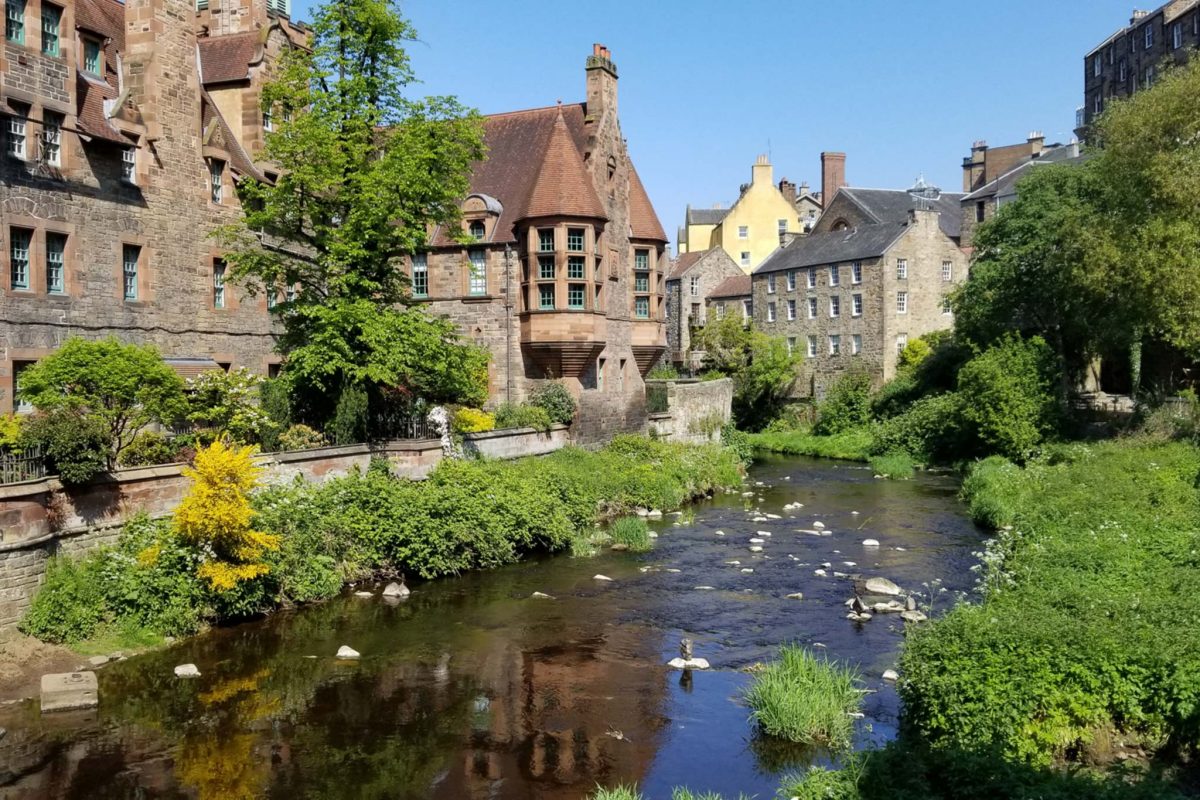 After checking in, we decided to stretch our legs. One of my ‘bucket list’ items was to visit Dean Village, which is about a 45 minute walk from the Adagio Hotel. We hopped past Waverley Train Station, and the Scott Monument, choosing to walk along Rose Street (instead of the standard Princes Street route), which is filled with lots of delightful little restaurants and shops, and well worth the leisurely stroll.

Dean Village itself is a hidden gem. It’s ‘off the beaten track’ and we love these sorts of places with a fascinating history. It’s a lovely, peaceful place and well worth a visit. 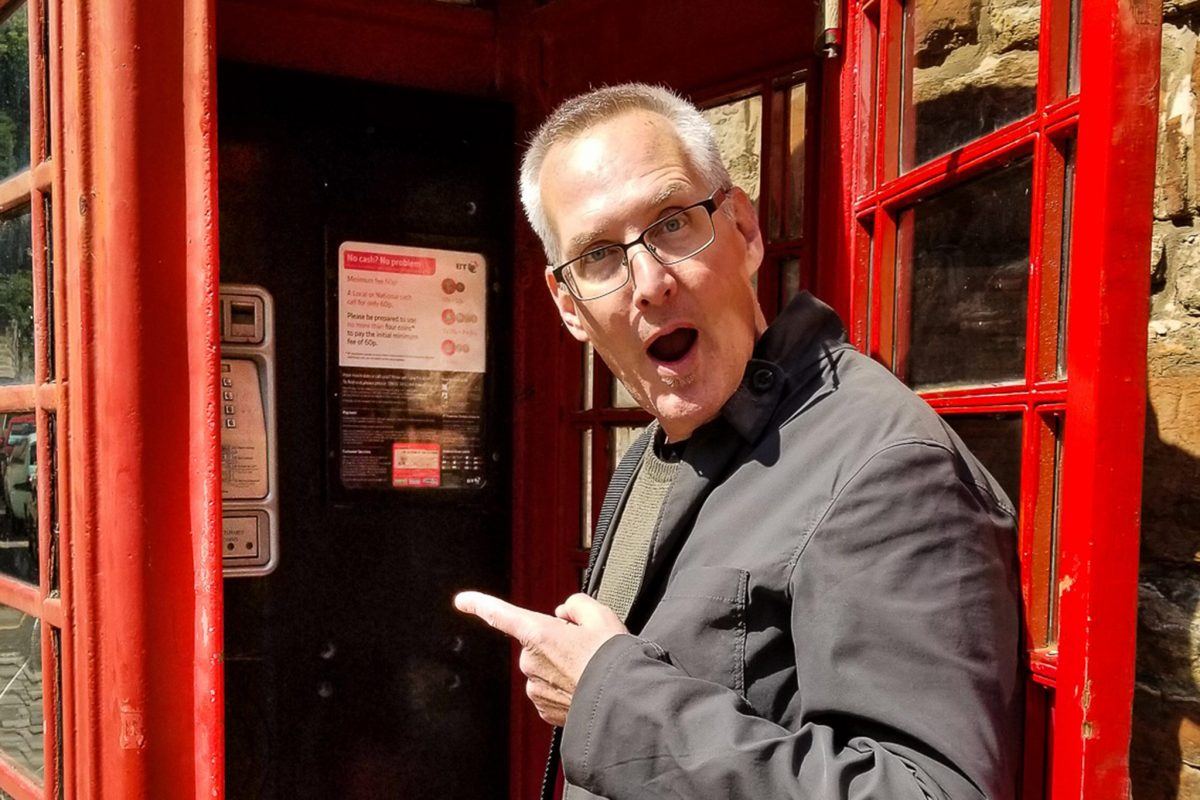 Of course I wanted my photo snapped in front of one of the iconic red phone booths that are dotted all over Scotland, and was quite surprised that it was an actual working phone booth in Dean Village. Such a thing simply doesn’t exist in the US anymore. Not only are they impossible to find in America, if you do find one, it’s likely to be broken. I was fascinated by this.

When we visited Edinburgh in 2016, we fell in love with Mother India, so we had to go back. There is a long history between the UK and the Indian sub-continent and curries are one of the favorite dishes in Edinburgh and across Scotland. It’s a small and busy place and only a 10 minute walk from our hotel. Reservations are highly recommended, and the service is lightning fast. The food is amazing, so bring an appetite! 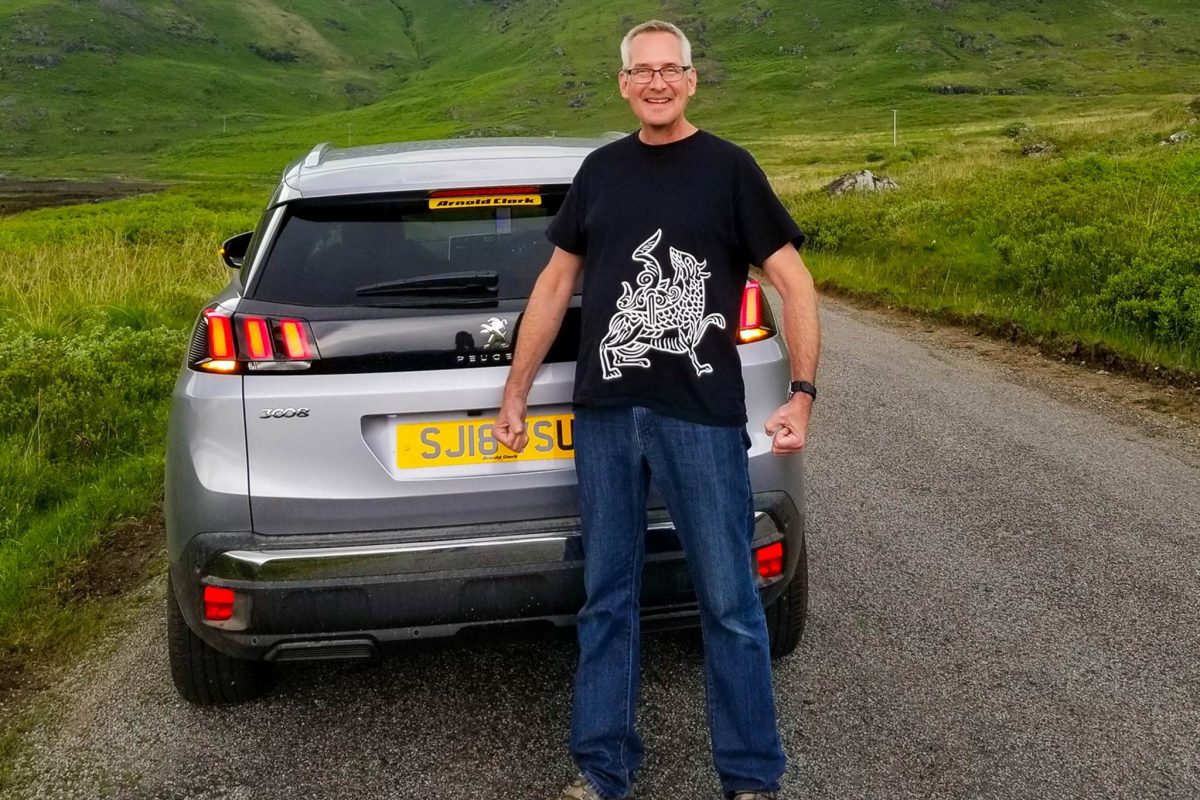 Tough car! The guy? Not so tough … © Rochelle DeBaun

Travelling by car in Scotland is simply the best way to see the country. You’ve got a tremendous amount of flexibility; you can get off the beaten track, see what you want and stop where you want. The great folks at Arnold Clark actually delivered our car right to the hotel at no extra charge. We had a brand spanking new mini-SUV, with only 20 miles on the odometer.

Having a car with higher wheel base was smart too, as there’s more visibility on the ‘Passing Places’ (there were a LOT). I cover these more later. If you are fearful about driving on the left-hand side, don’t worry. If you are a good driver in your home country (right-hand side), you’ll pick it up quickly. The VisitScotland Community Message Boards also have awesome content on driving.

One of my ‘bucket list’ items was to have a bagpipe lesson. I have never played a musical instrument in my life (I barely know how to turn on my home stereo), so I approached this with a mixture of fear and delight!

We met Connor Pratt – master piper from the The Royal Edinburgh Military Tattoo at their offices, just a short walk up the Royal Mile and only five minutes from our hotel. To be honest, this was just me playing ‘dress up’ and honking out a couple of horrible notes.

Even though I failed miserably, I’m deeply honored to have met Connor and understand what he does (for no payment) and the effort he makes for retired armed forces personnel. It’s people like him that make our world a better place. For those that don’t know, The Royal Edinburgh Military Tattoo, a non-profit organization, which has been running since 1950, has raised £2 million in the last two years for good causes.

If you have never worn the full kit (kilt and accessories), it’s an incredibly heavy (and hot!) uniform to don. I can’t imagine what it’s like in summer. The guys and gals that play for the Military Tattoo, do it for free, for the camaraderie, the passion and the history. Thank you for this precious experience Connor, I’ll never forget it.

We were on our way to the Summerhall Distillery, but happened to walk by the Surgeons’ Hall Museum on Nicolson Street, and decided to spend a quick 45 minutes inside. Originally developed as a teaching museum for students of medicine, SHM’s fascinating collections, including bone and tissue specimens, artefacts and works of art, have been open to the public since 1832, making it among Scotland’s oldest museums. It’s not the most cheerful place and you’ll walk out thinking ‘gosh, there are so many ways to die’, but it’s a remarkable and really well curated collection.

Next up, and only a short walk from the Surgeon’s Hall Museum we headed over to Summerhall. This is an interesting place and a mixed bag of entertaining things. The main building is home to 120 artists, designers and a sprinkling of other companies. Across the internal courtyard (where they often have live music events) there’s a lovely bar called the ‘The Royal Dick’ (the building used to be an animal hospital called the ‘Dick Vet’), where we had a dram of the good stuff before our tour.

Summerhall Distillery is the home of Pickering’s Gin and you can have a lovely tour of their craft distillery. Victoria Anderton there was kind enough to give us a tour around. There’s a complimentary gin and tonic to start and the tour ended with three samples of their core range. Their oak-aged gin was my favorite!

We needed a quick nap after that (wee!) gin tasting as we were a bit tuckered out, after which we opted for a cab ride to Ghillie Dhu to try some authentic Scottish cuisine.

A quick note on Edinburgh cabs – they are easy to find and hail and not very expensive. If you’ve got a talkative cabbie (as most seem to be) you’ll get a good story and some local history to go with your ride. We also used three Uber cabs, and those promptly appeared. They showed up with clean cars and are fairly inexpensive.

Ghillie Dhu is a dramatic vaulted Georgian hall with booths for Scottish dining, live music and ceilidhs (dancing). Dinner was in a cosy booth with a confessional-style window for ordering flights of whisky. Poke the button and the bartender appears through the wee opening with your drinks. Fine food ✓ Live music ✓ Ceilidh (kay-lee) ✓.

From Edinburgh we hopped in our car and headed north up the M90 motorway to the lovely city of Perth. The drive up was easy, but navigating through Perth to get to Scone Palace was a bit more of a challenge, especially as there was a BBC Radio  concert going on there the same day!

After a few wrong turns and asking for directions, we ended up with one of the Earl of Mansfield’s ghillies, Iain Kirk. If you are looking for a master ghillie (The Yoda of Fly Fishing), you could not find a better one. Iain does not cut corners and you’ll be learning from a true professional. Fly-fishing was crazy hard, I think it would take me a month just to learn to cast. That said, it was a wonderful experience. 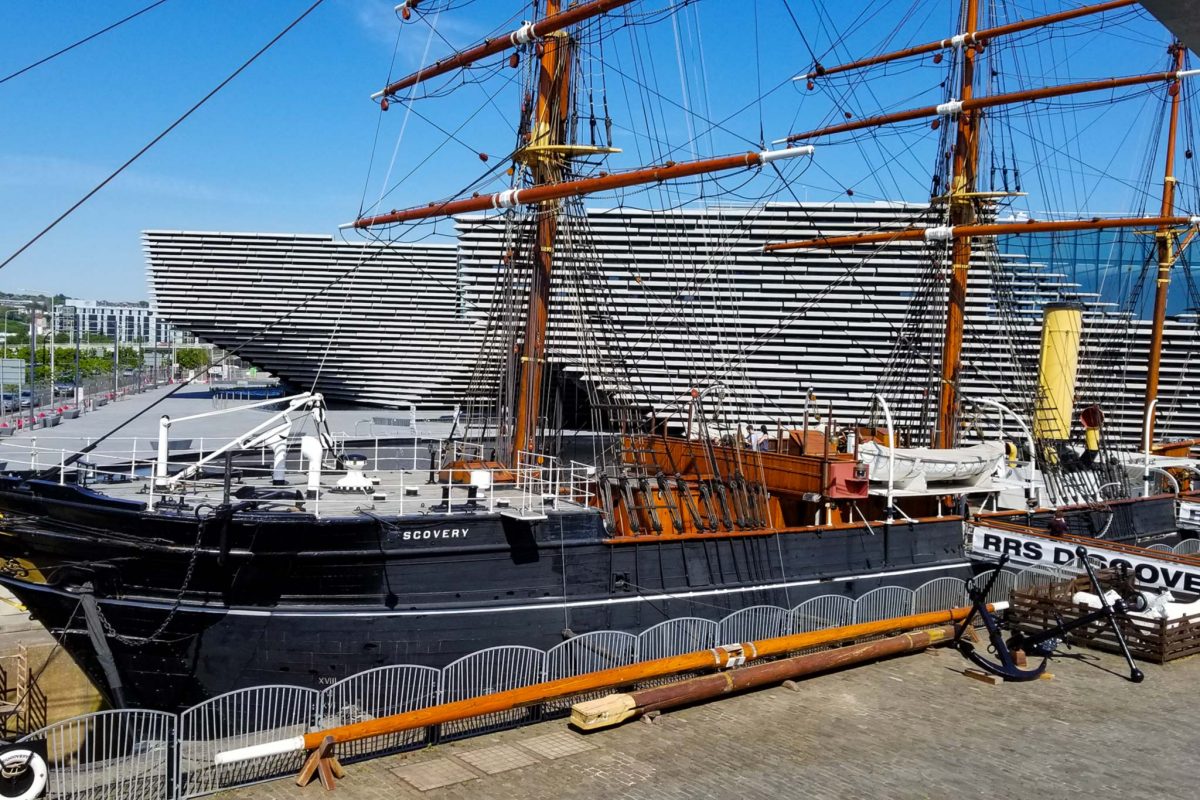 From the River Tay we jumped on the A90 east for a short trip to Dundee (about 25 miles). What a fantastic small city with an amazing waterfront and a plethora of attractions. We arrived too late to really explore the downtown properly (shame on us), but we did have a fantastic tour of the RRS Discovery. This was the last traditional wooden three-masted ship to be built in Britain. Designed for Antarctic research, it was launched as a Royal Research Ship (RRS) in 1901. It’s perfectly preserved and sits right on the waterfront. 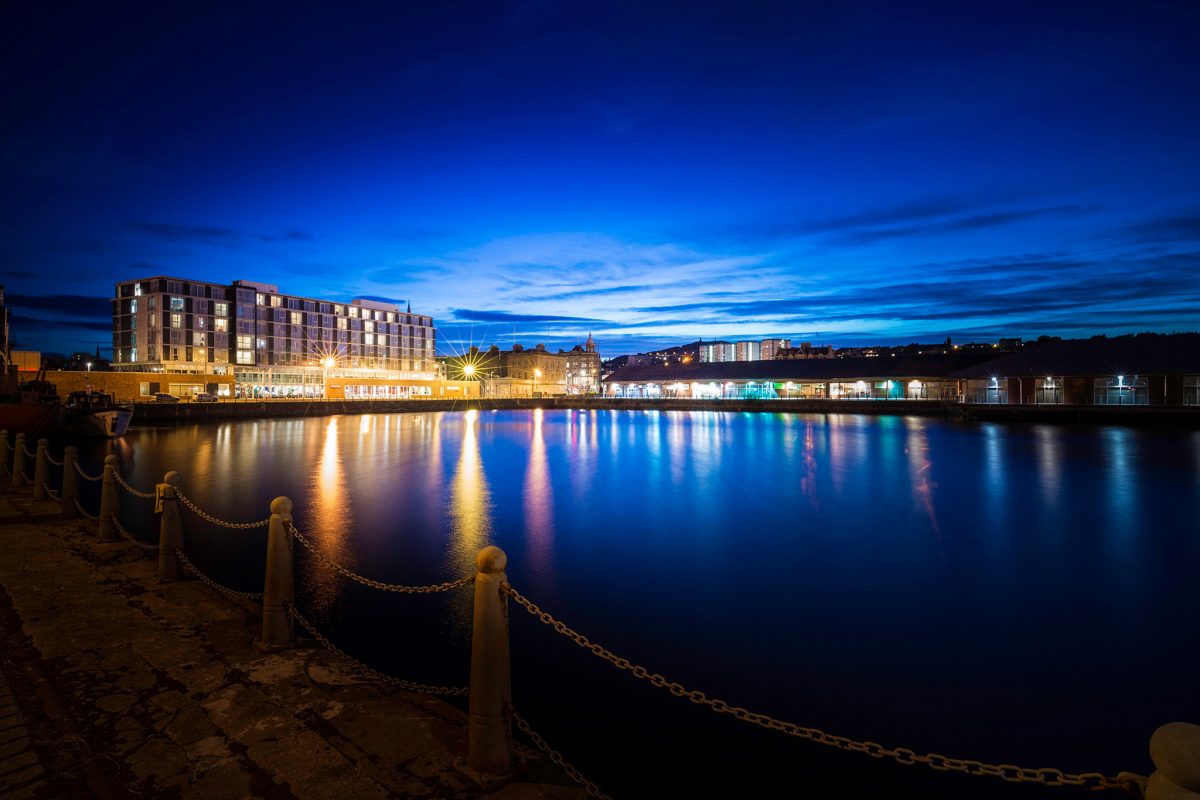 If you’re looking for a nice place to stay with fantastic views across the water, try the Apex City Quay Hotel. The rooms are modern and contemporary, and you are only a 10 minute walk from the RRS Discovery and the soon to open V&A Dundee museum (opens September 15, 2018). The V&A Dundee will be an international centre for design for Scotland – the first ever V&A museum to be built outside London.

Follow our journey in Parts 2 and 3 of this travelogue across Scotland.