Robert Burns, Scotland's National Bard, lived and died in Dumfries. This tour follows in his footsteps and visits many of the sights associated with the Bard.

Robert Burns, Scotland's National Bard, moved to Dumfries from Ellisland Farm in November 1791. He spent the last five years of his life in the town, working as an exciseman, and became involved with many events of the time.

The tour consists of a leisurely walk of around 1.5 miles and will take approximately 2.5 hours but can be adjusted to suit.

Points of interest include Burns House where he died and the Mausoleum where he is laid to rest, (access inside included), The Robert Burns Centre and several more.

Hear many accounts of the times along with some of his best loved poems. 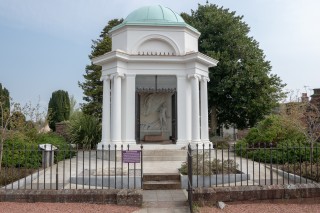 Robert Burns lived the last five years of his life in Dumfries. This walking tour follows in his footsteps and visits many sites associated with the Bard. Starting at the Burns Statue, it includes The Robert Burns Centre, we gain access into the Mausoleum where he is laid to rest, visit Burns house where he died and The Globe, his favourite Howff. Your guide is a regular speaker at Burns Suppers and a winner of several Burns recital competitions. Arrangements can be made to alter the tour to specific requests.

A morning slot from 10am to 12:30 pm or an afternoon walk from 1pm to 3:30pm are available although timings for group tours can be arranged to suit.