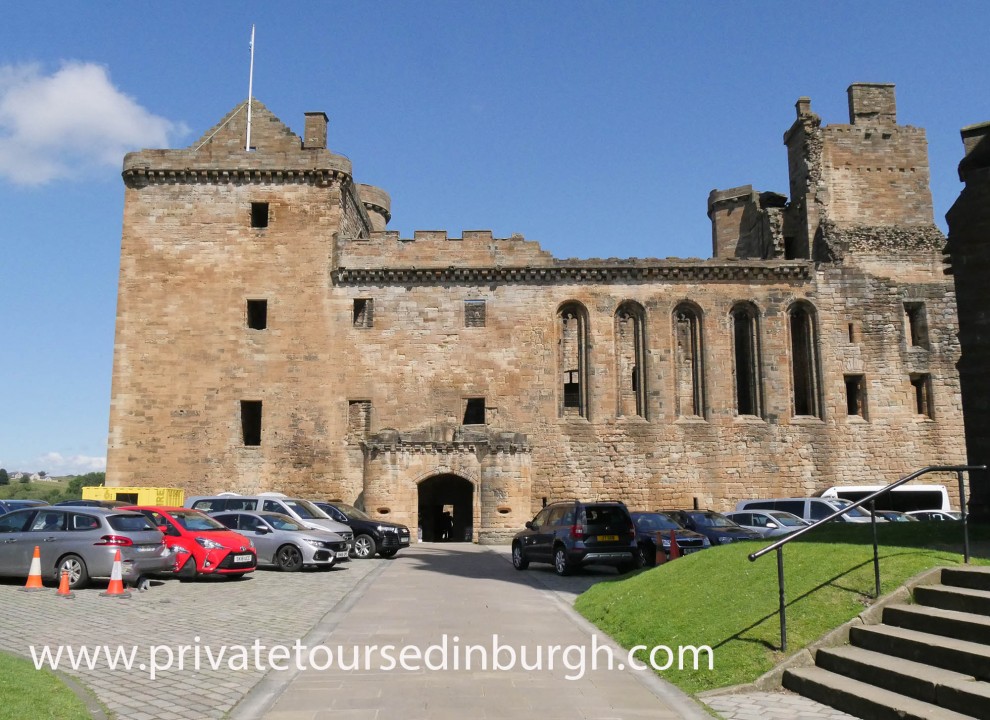 Looking for a day trip from Edinburgh ? How about taking a tour from Edinburgh of Scotland's historic castles and film locations ? The latest Mary Queen of Scots film came out recently , closely followed by the Outlaw King , starring Chris Pine , about the life of Robert the Bruce , King of Scots . Linlithgow Palace features in both of these films .

Shore excursions- all of our day trips are available as shore excursions from the Edinburgh ports South Queensferry, Newhaven and Rosyth . Daytime phone number +44131 549 9785.

Private tours Edinburgh For the latest information about availability and best prices please contact Private Tours Edinburgh by phone / WhatsApp on +447305294773 or contact us online .

Blackness Castle goes back to 1440 . The castle provides the setting for Fort William in Outlander , as the original fort no longer exists.

The castle is long and narrow because of the shape of the rock on which it is situated and it is sometimes called ‘ the ship that never sailed ‘ . It guards the bay at Blackness and is only a few miles from Linlithgow Palace . The first castle was built in the middle of the 15th century by Sir George Crichton , Earl of Caithness , a member of one of the most powerful families in Scotland . King James II acquired Blackness in 1453 when he annexed the lands of the Crichtons . From then on the castle was mainly used as a prison . In 1543 Cardinal Beaton was held here for a month . Rebuilding started in the 1530s under the direction of Sir James Hamilton of Finnart who also worked at Linlithgow Palace and Stirling Castle . He was instructed to make the castle safe from artillery , and he achieved this by making the south and east walls very thick . A new tower was built at the south end . In the 1560s , in the reign of Mary Queen of Scots , a Spur was built to protect the main gate . In the 1870s the castle was the main ammunition depot for Scotland .The Castle is a popular location for historical re-enactments and has changed little in 600 years . Doune is one of the best preserved medieval castles in Scotland.

Originally dating to the 13th Century, Doune Castle near Stirling plays Castle Leoch, home to Colum MacKenzie and his clan in Outlander TV series . It also represented the castle Winterfell in Game of Thrones.

It features in the first episode in series one in the 20th century when Claire and Frank Randall visit the castle on a day trip.

Doune has appeared several times on screen and was featured in Monty Python and the Holy Grail.

Major conservation work has been carried out at Stirling Castle over many years to preserve the attraction as a major national and international monument. The refurbishment of the Great Hall was completed a seven years ago . A particular feature of the Great Hall is stained glass windows featuring clan crests . A number of banquets and concerts are held in the Hall throughout the year .

Other popular tours from Edinburgh include

Your tour guide / driver is David . Find out more about him on Photogold .