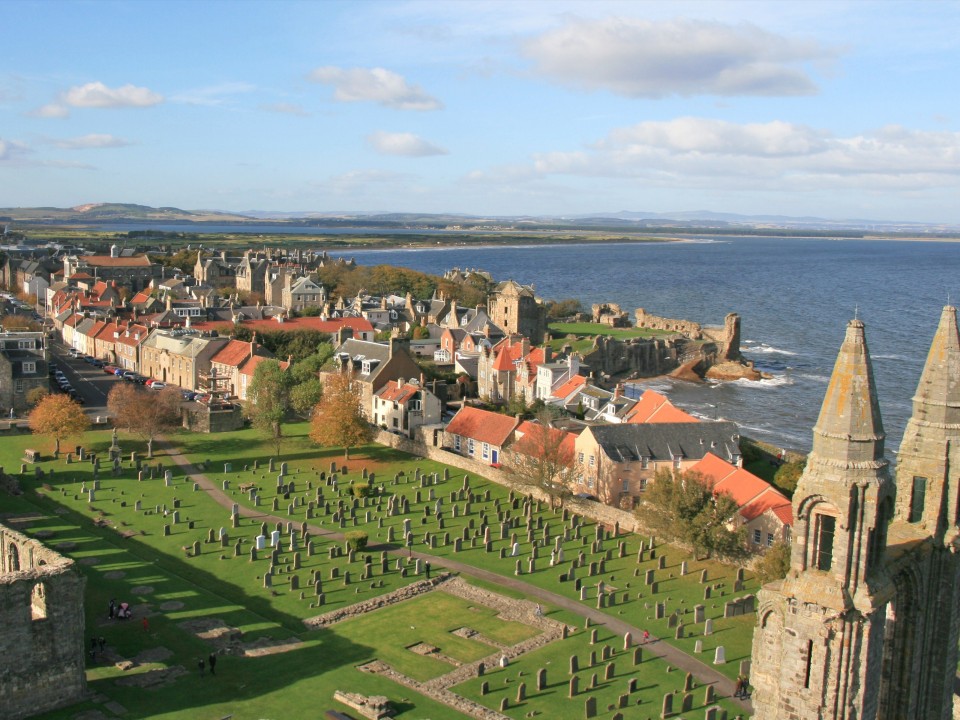 Travelling to the ancient Kingdom of Fife this relaxing day trip explores the Outlander filming location of Falkland, the historic seaside town and golfing mecca of St Andrews and a fascinating visit to one of Scotland’s newest whisky distilleries.

Our first stop is only a short drive outside Edinburgh - the magnificent Forth bridges at South Queensferry. There has been a crossing here since the 11th century when Queen Margaret established a ferry service to transport pilgrims from Edinburgh to Dunfermline Abbey and St Andrews. Upon opening in 1890 the Forth Rail Bridge was the largest steel structure in the world and is one of the major engineering achievements of the Victorian age. The Forth Road Bridge was opened in 1964 and the new Queensferry Crossing was built alongside in 2017.

We cross the River Forth into the ancient Kingdom of Fife and skirt famous Loch Leven where Mary Queen of Scots was imprisoned on an island between 1567-8 prior to her dramatic escape and bloody execution.

We arrive at picturesque Falkland shortly afterwards. Scotland’s first conservation village is famed for quaint streets and its Royal Palace, a country residence of the Stuart dynasty and favourite of Mary, Queen of Scots. Falkland also doubles as 1940’s Inverness in the blockbuster series Outlander where Clare and Frank stay on their second honeymoon.

We arrive in St Andrews at lunchtime and after a short familiarisation tour you will have a minimum of two-and-a-half hours to explore this compact and historic town. St Andrews is internationally renowned as the 'Home of Golf' and you will have plenty of time to see the famous Old Course - a place of pilgrimage for golfers of all abilities.

St Andrews was one of the most important religious sites in medieval Europe and the ruins of the massive Cathedral are only 5 mins walk from the Castle, perched on cliffs above the North Sea.

These two historic buildings played key roles during the Scottish Reformation. There are three fantastic beaches in St Andrews - the opening scenes of Chariots of Fire were filmed on the West Sands.

The oldest University in Scotland (established 1411) is located here and its architectural legacy can be seen all over town.

Prince William, Duke of Cambridge, studied and met his wife Kate Middleton here (they are known as the Earl and Countess of Strathearn in Scotland). Mary Queen of Scots was educated here and was probably one of the first women in the world to play golf.

A short drive from St Andrews is Kingsbarns Distillery. One of Scotland’s newest malt distilleries it’s a fascinating insight into whisky production and these converted farm buildings now produce a fruity Lowland single malt from Fife-grown barley as well as numerous tasty gins. Our tour and tasting is at a reduced rate and there is also a great café, exhibition and access to the beach and world-renowned Kingsbarns Golf Course.

Our route home takes us through the charming landscapes of the East Neuk of Fife.