Tour Central Scotland and see the sites on the way to Stirling once the capital of Scotland.

Starting at the West End of Edinburgh you will visit

South Queensferry where a ferry took people across the the water to Fife for over 300 years.

St Michael’s Church stands next to Linlithgow Palace. On 22nd May 1242, the Church of St Michael of Linlithgow was consecrated by the Bishop of St Andrews.

The Kelpies two horses heads sculpted from steel, which signify the joining of the two main Scottish canals.

Falkirk Wheel is a barge lift that replaces 18 Lochs taking barges from one level to another.

Bannockburn visitors Centre and Battle site this is where Scotland first gain independence from England,

Stirling Castle stands on a rock as Edinburgh Castle on an extinct volcano, it was also the home of Mary Queen of Scots and where she was crowed. (Entrance fee)

On the tour entrance to sites are not included.

Shorter trips can be designed for individuals

Or a day trip to Stirling with a map of all the attractions provided. 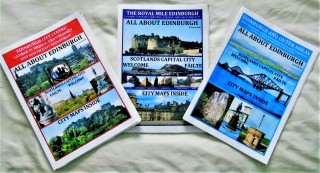 All About Edinburgh operates bespoke tours of Scotland. Available for individuals and groups. There are two websites; www.allaboutedinburgh.co.uk which gives information on all the attractions, activities food, drink and entertainment or buy the Unique All About Edinburgh Guide books which give the historic sites stories and places to visit with maps to help you find everything. www.lothianandborders.com (All About Scotland) Online enquiries for Tours, Transport and Transfers and how to book a Tour. Unique Tours of the Lothians, Borders Dumfries Stirling Fife Wanlockhead and St Andrews.

Visit All About Edinburgh