Calais and Jill are passionate about travel and love to share their experiences and knowledge of Scotland with like minded people. We can offer 1 to 10 day tours anywhere in Scotland travelling in comfort in our Mercedes 8 seater Vito Minibus.

Pick up 8.00am in Edinburgh

On our road trip the first point of interest would be a drive past the majestic Kelpies designed by sculptor Andy Scott. They were completed in 2013 and stand beside the Forth and Clyde canal at a height of 30 meters tall. The Kelpies are a mystical water horse but these two are modelled on two Clydesdale horses Duke and Baron who would have towed barges and coal ships along the canal.

Travelling past Bannockburn the site of the famous battle and where Robert the Bruce raised his standard in1314.

From here we visit Stirling Castle, built around 1107 and one of the most important and strategic castles in Scotland. The castle sits on a crag once part of a volcano. The castle was once the childhood home of Mary Queen of Scots. There have been many sieges between the Scots and the English to take the castle. Two of the most important sieges were in 1297 when the English suffered defeat at Stirling bridge by William Wallace and Andrew Moray. Then again in 1314 when Robert the Bruce claimed victory against the English at Bannockburn.

From the castle we can view The Wallace Monument, a distinctive landmark commemorating a Scottish hero, Sir William Wallace from the 13th and 14th century.

As we drive past these sites, we can take in the views of the Ochil hills and the Campsie fells then onto the village of Doune and Doune Castle, residence of the Dukes of Albany. The castle has been a film location for Monty Pythons' "Holy Grail" and Diane Gabaldon’s “Outlander”.

The next town on our route would be Callander which is the gateway to the highlands and the Trossachs national park. A very traditional Scottish town on the River Teith with a lovely high street full of cafes, quirky boutique style shops and perhaps a stop for some souvenirs. Then, on the way to Killin we will stop by Kilmahog and take in a photo opportunity with some Highland "Coos".

Then we will stop in Killin to view the tremendous Falls of Dochart and have lunch at the Inn.

On route around Kenmore and the beautiful Loch Tay we can view the stunning scenery of Ben Lawers mountain range, which is a national nature reserve.

From here we take the road to Aberfeldy a captivating town in Perthshire, known for its whisky distillery and mentioned in "The Birks of Aberfeldy" a poem by Robert Burns. Why not stop for a wee dram.

Onwards to the lovely village of Dunkeld which sits on the banks of the River Tay.

The majestic Dunkeld Cathedral dominates this picturesque village. The tomb of the Wolf of Badenoch lies within this cathedral. You can’t miss the brightly coloured little houses built in the 1700’s which are now in the care of the National Trust for Scotland.

We head home over the Thomas Telford’s bridge towards Perth and big tree country.

Passing by the Lomond Hills and Loch Leven, Loch Leven castle was once a prison for Mary Queen of Scots. She managed to escape but never regained her crown and was forced to flee to England.​

Our final section of the tour takes us across The Queensferry Crossing one of 3 bridges over the Firth of Forth. Built in 2015 it’s the newest of the 3, with the Rail bridge (UNESCO world heritage site) 1890 and The Forth Road Bridge 1963. 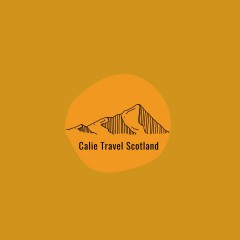 Welcome to Calie Travel Scotland, we are a bespoke tour company based in the East Neuk of Fife. Calais and Jill are passionate about travel and love to share their experiences and knowledge of Scotland with like minded people. We can offer 1 to 10 day tours anywhere in Scotland travelling in comfort in our Mercedes 8 seater Vito minibus. Whether you are interested in history, whisky, golf, the arts, music, photography, walking, or finding out about your Scottish ancestry, we can provide a tailor-made package tour to suit you. We also offer airport transfers, golf tours and private hire.