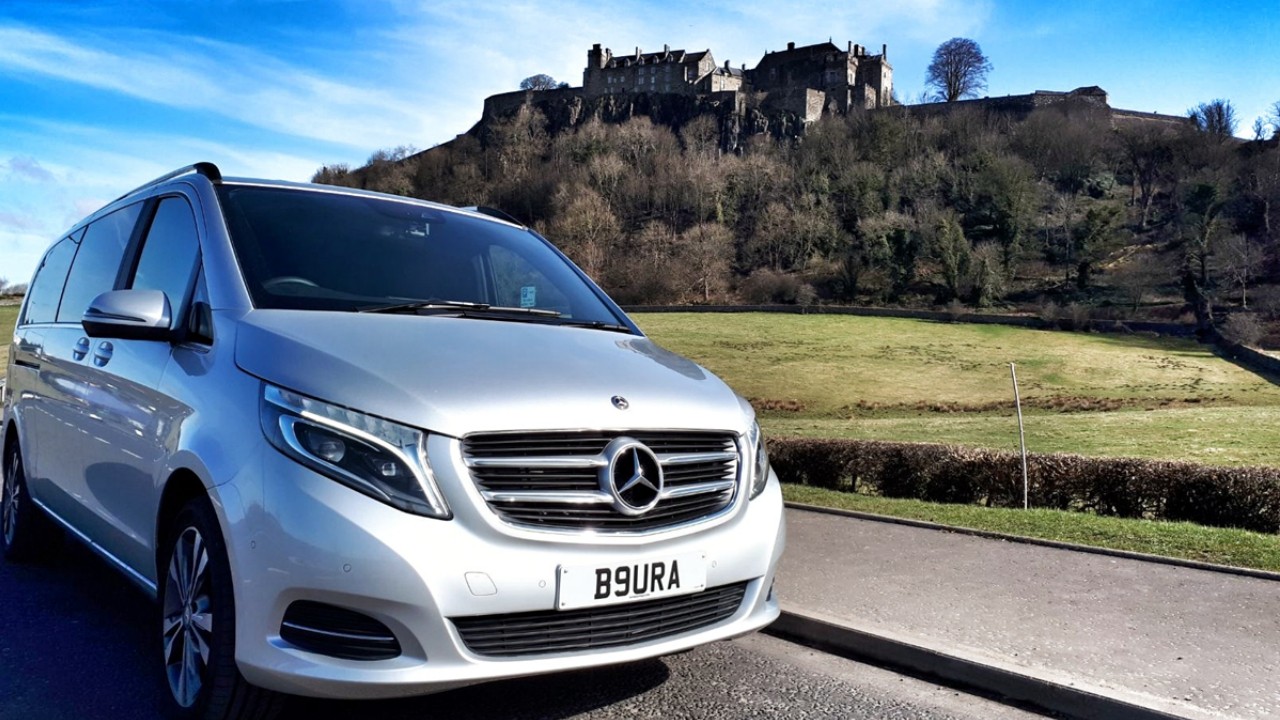 Your Stirling Private Luxury Tour takes in the Gateway to the Scottish Highlands, with a Door to Door service from any Glasgow Location . Remember this is "Your Day, Your Way" tailored to your needs.

Take the stress out of navigating on unfamiliar Scottish roads and let someone else take care of the driving instead. This tour is perfect for travelers with limited time who want to see the best of Stirling, the Gateway to the Highlands. Travel in a luxurious Mercedes-Benz vehicle with Wi-Fi and bottled water included to make it a stress-free experience. Highlights include The Battle of Bannockburn Experience, Stirling Castle, and Stirling Bridge.

The worlds largest equine sculptures. Located next to the Forth & Clyde Canal, standing at 100ft tall and weighing more than 300 tonnes each, the magical Kelpies are a man-made wonder and a feat of engineering. The works of art, created by artist Andy Scott, have become iconic on the landscape after being modelled on real-life icons of times gone by — Clydesdale horses Duke and Baron. The Kelpies represent the lineageof the heavy horse of Scottish industry and economy, pulling the wagons, ploughs, barges and coalships that shaped the geographical layout of Falkirk.

The Battle of Bannockburn Experience:

Prepare for battle at the multi-award-winning visitor centre. The Battle of Bannockburn experience puts you at the heart of the action with cutting-edge 3D technology. Outside, wander across the parkland and admire the restored commemorative monuments, including the iconic statue of Robert the Bruce. The visitor centre expertly harnesses fully-immersive 3D technology to bring this thrilling chapter of Scotland’s story to life. Come and experience medieval combat like never before and discover more about this crucial event in Scottish history. Take command of your own virtual battlefield to try and re-create the battle, and then witness Bruce’s decisive victory, against all odds. Interact with medieval warriors, pages, archers and knights on either side of the conflict as they reveal how they became involved in the battle. Outside, follow in the footsteps of Robert the Bruce in our memorial park and see the spot where he raised his royal standard. Admire the battleground and restored commemorative monuments, including the iconic statue of Robert the Bruce, cast in shimmering bronze.

Church of the Holy Rude:

The Church of The Holy Rude at the top of Stirling Old Town has witnessed over 900 years of history. It was the crowning place of King James VI of Scotland, and even bears bullet marks from past battles. Visit for peaceful reflection, impressive architecture and stunning stained glass windows. Make sure to explore the atmospheric cemetery too, which offers views across to Stirlingshire and The Trossachs.

Heading out of Stirling to The National Wallace Monument you will pass Stirling Old Bridge, Although the original timber bridge from the famous 1297 Battle of Stirling Bridge no longer exists, Stirling Old Bridge stands just downstream and replaced the earlier timber crossings. Steeped in history, Old Stirling Bridge was built in the late 1400s or early 1500s by Murdoch, Duke of Albany. One of its arches was blown up by General Blackney in 1745 in an attempt to prevent Bonnie Prince Charlie’s Highlanders from crossing the River Forth.

A national landmark, where visitors discover the life and legacy of the patriot and martyr Sir William Wallace. See Wallace’s legendary battle-sword – the centerpiece of the magnificent Hall of Heroes, and enjoy panoramic views from the Crown. One of the most distinctive landmarks on the Stirling skyline – The National Wallace Monument commemorates the Scottish patriot and martyr who triumphed over King Edward’s army at The Battle of Stirling Bridge. As you climb towards the crown of the famous tower, each level tells the story of Scotland’s National Hero, and shows how his part in the history of Scotland has been recognised through the generations.

Your day is planned to cover all the sights and attractions of Stirling at your pace, with no waiting for other passengers. It is your day if there is something you really want to see Aura will ensure it is added to your itinerary. With so many places to visit our sightseeing excursion allows you to sit back and relax in luxury taking in the stunning scenery and if you want to stop you can. Just remember this is Your Day Your Way!