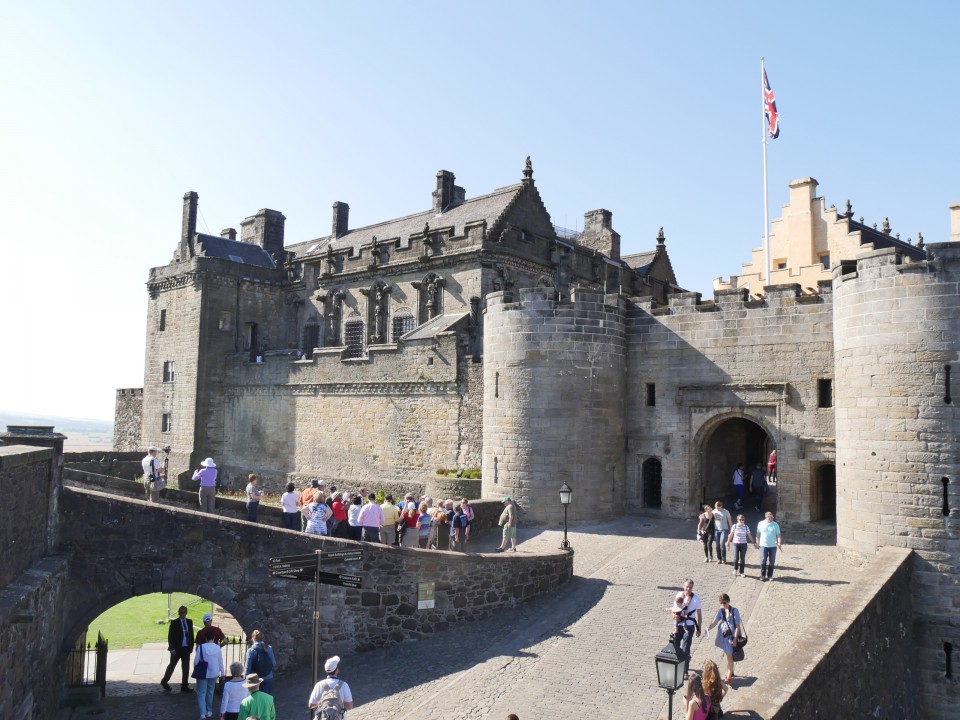 Drummond Castle & Gardens near Crieff starred as the Palace of Versailles in the Outlander TV series .

The grounds, which date back to 1630, are considered "the best example of formal terraced gardens in Scotland".

Jamie and Claire meet Black Jack Randall at a garden party at the and Jamie challenges him to a duel . The castle was the Palace of Versailles in TV drama Outlander.

Drummond Castle Gardens, which are protected as a category A listed building -- in contrast to the B listed castle -- already attract thousands of visitors per year, and are included on the Inventory of Gardens and Designed Landscapes in Scotland.The gardens -- complete with peacocks -- feature ancient yew hedges and the remaining beech tree planted by Queen Victoria in 1842

From Stirling Castle’s ramparts, visitors can take in views of the Forth Valley and Ben Lomond , as well as one of Scotland’s most important battle sites - Bannockburn (1314). The castle is at the head of Stirling’s historic old town.Like Edinburgh Castle , Stirling sits on a volcanic rock dominating the city skyline .

Stirling Castle is not only one of Scotland’s grandest and most imposing castles, it was also a real favourite with the Stewart kings and queens. And their investment in it showedjust how much they loved to use it, as well as their desire to ensure it both impressed all who visited it, and represented a statement of their power and wealth. James IV created the Great Hall, the largest medieval banqueting hall ever built in Scotland, and James V’s Royal Palace, with its lavishly decorated Renaissance façades, was a masterpiece of the period.

The historic site of the Glenturret Distillery has been soaked in whisky since the early 17th century with early accounts of illicit stills and bothies since at least 1717. The one thing that those early bothies have in common with today’s distillery is that they all drew their waters from the cool, clear Turret Burn and used similar methods and equipment.

A taste of a Glenturret single malt should be as close to taking a step back in time as you could possibly get, and the only authentic traditional Scottish whisky experience.

At Glenturret Distillery, the whisky is still made By Hand and By Heart, an artisan process that evolved hundreds of years ago and is still used today in the production of The Glenturret single malt.

The award-winning Glenturret single malt is produced using traditional methods slowly, patiently and in small precious quantities. The Glenturret is renowned and celebrated for its quality, glorious bouquet and natural golden hue.

This day trip from Edinburgh is ideal for solo travellers and small private groups of up to to four people .

Your tour guide/ driver is David