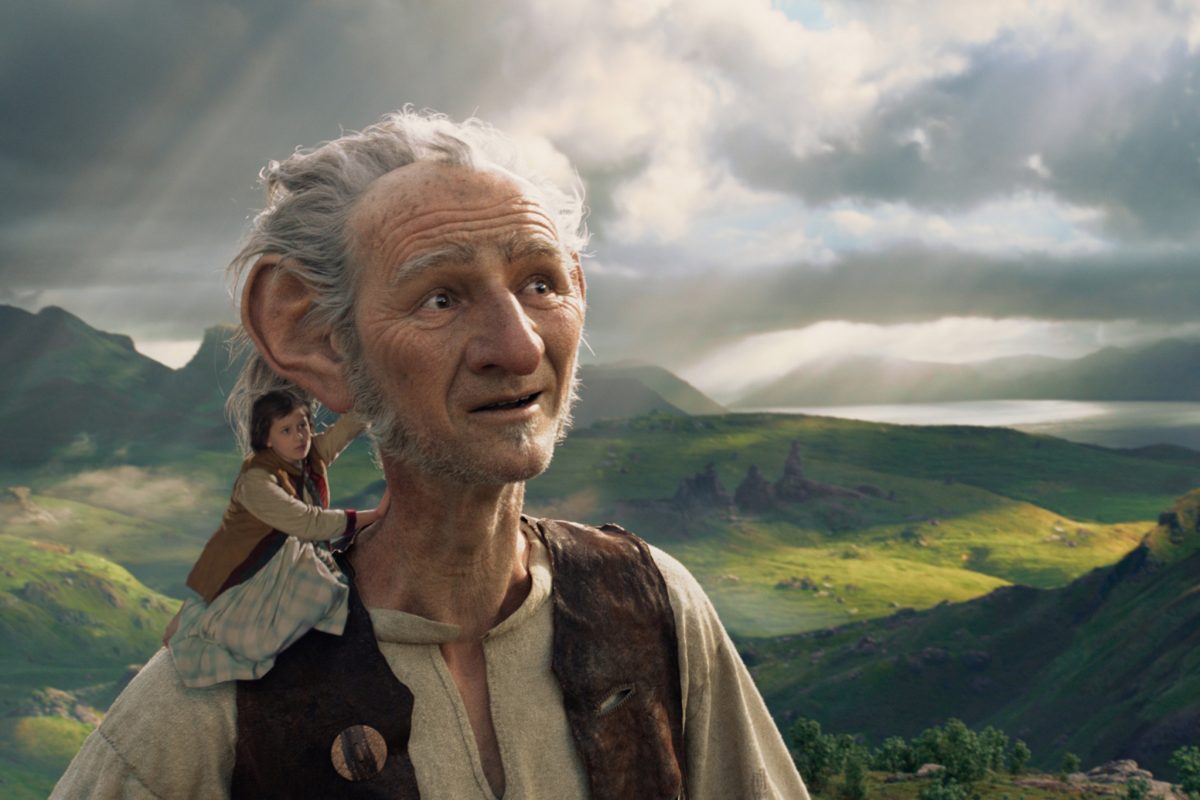 The BFG © Entertainment One

The camera really loves the Isle of Skye. The largest of the Inner Hebrides, it’s an island which boasts some of the most breathtaking Highland landscapes imaginable. Across Skye you’ll find precarious peaks, jutting ridges, imposing pinnacles and sweeping glens which are nothing short of majestic.

Even if you’ve not already looked upon Skye with your own eyes, there’s a good chance you’ve already seen it on the silver screen. The island has been captured in dozens of feature films, from big-budget blockbusters to critically-acclaimed arthouse productions. In some movies, the striking island scenery makes only a fleeting appearance, whilst in others, it’s a major star. It’s been the backdrop for dramas set in the Highlands, as well as depicting many wondrous, imagined fantasy worlds.

You could slip on a DVD and enjoy the landscape from your television screen – but a much better option would be to plan a trip and explore the sets for yourself! Here are some of the top filming locations on the Isle of Skye which you can visit: 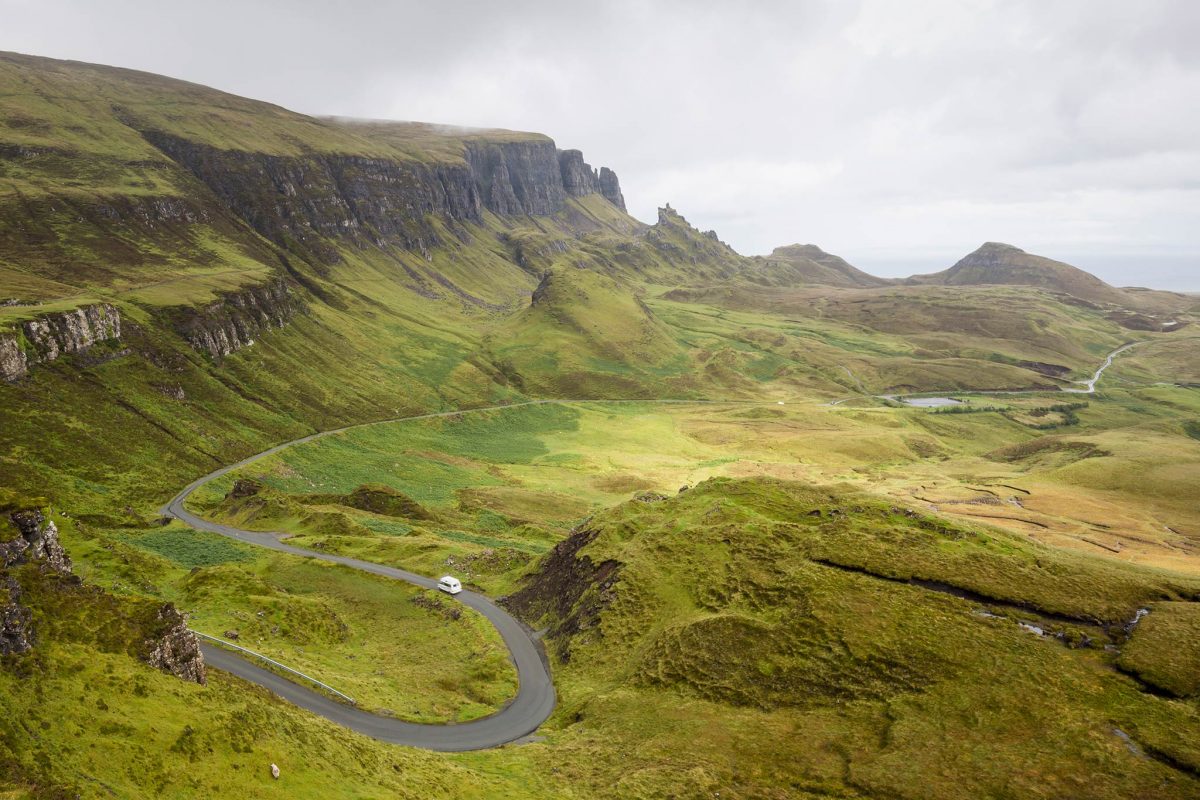 Once seen, never forgotten, the Quiraing is one of Skye’s most iconic landscapes. This landslip on the northernmost point of the Trotternish Ridge is defined by cliffs, sweeping hillsides and awesome pinnacles and looks strangely supernatural.

Located in the north part of the island, the Quiraing can be reached by car, following the road to Uig from Portree. There’s parking at the top of the hill on the road in between Uig and Staffin. In addition, there are bus services from Portree which pass the Quiraing.

It’s best to take in the Quiraing on foot by following the rough path, where you’ll enjoy splendid views of the Trotternish Ridge.

The Old Man of Storr 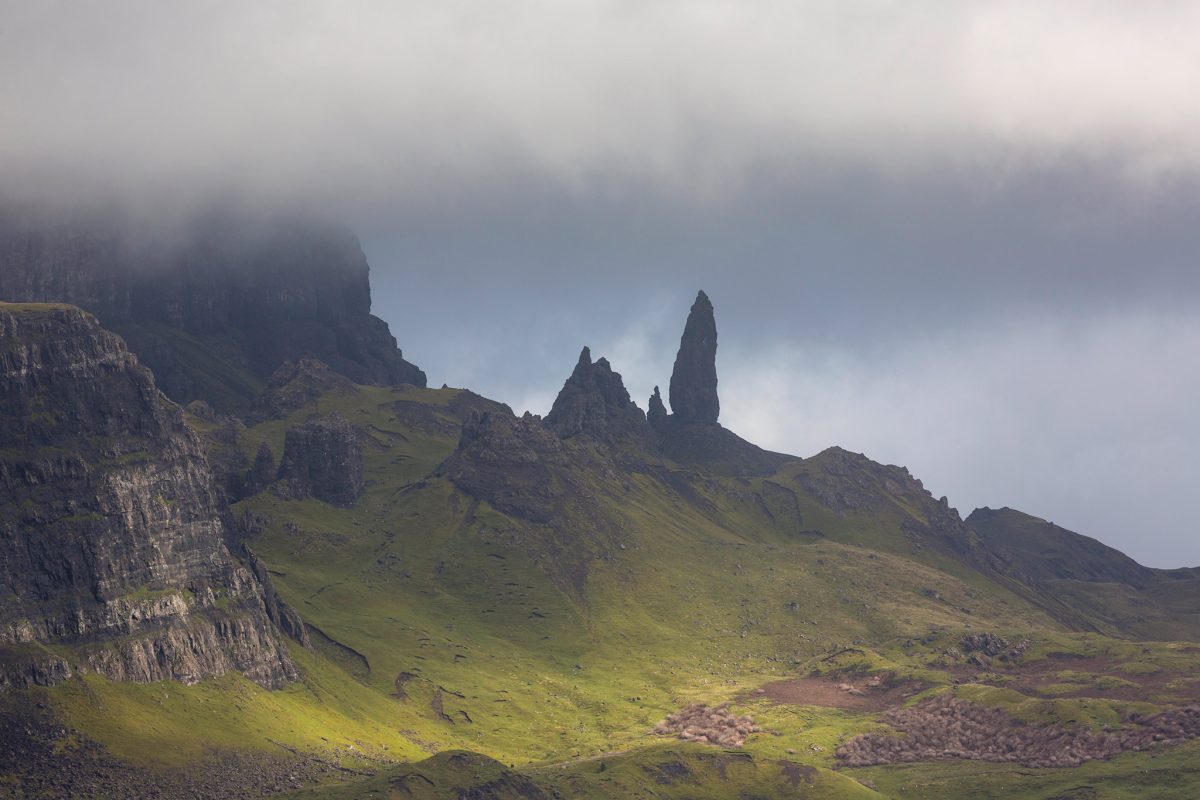 The Storr and the Old Man of Storr

We have to say, rocks don’t come much more cinematic than the Old Man of Storr! Lying on the Storr, a rocky hill on the Trotternish Peninsula, this pinnacle proudly stands at around 160 ft tall, and is surrounded by several slightly smaller pinnacles.  A true icon of Skye, it can be seen for miles around.

After visiting the Quiraing, it’s a 20 minute drive to the Storr following the A855 in the direction of Portree. The local 57 bus stops near the car park too.

To climb the Storr to the Old Man of Storr, follow the path through the felled woodland and then approach the Old Man over the open hillside. 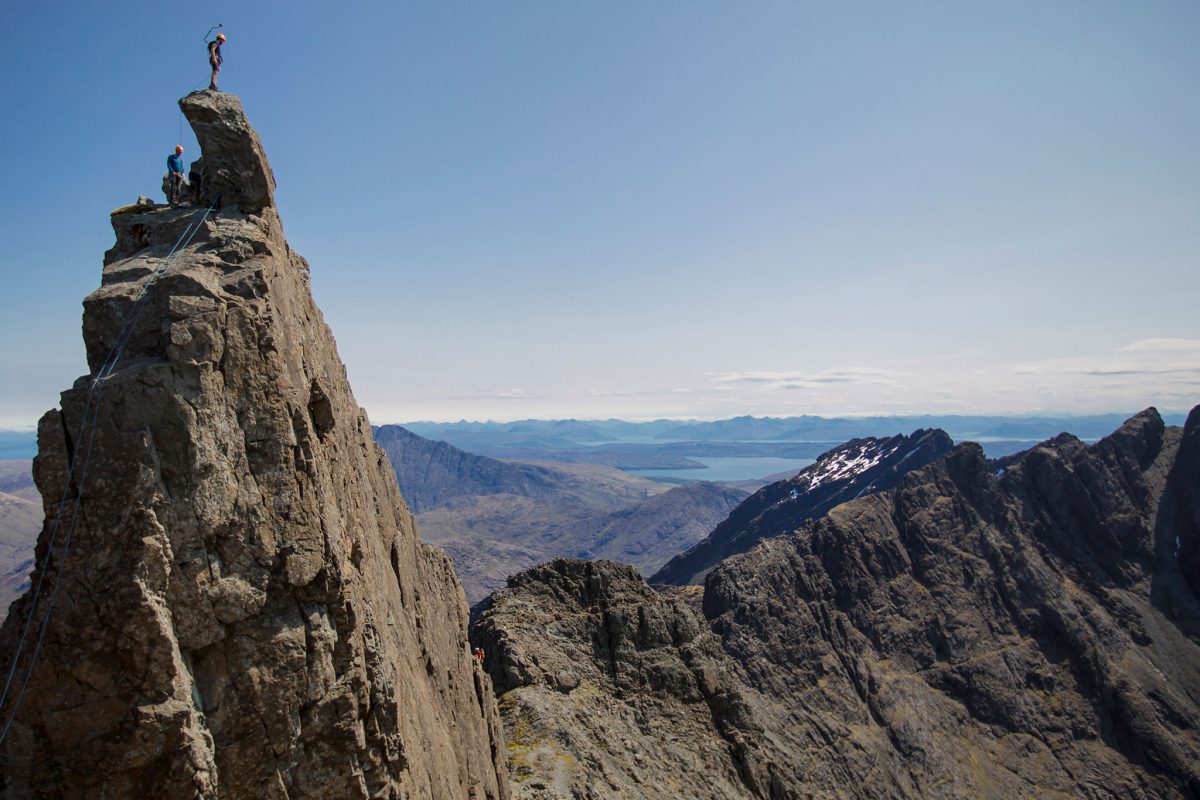 The Inaccessible Pinnacle on the Cuillin Range

The rocky summits of the Cuillin are amongst the toughest mountains in the UK and are pure drama. Sometimes called Black Cuillin, it can be described as breathtaking yet unforgiving. It’s a range formed by 36 peaks stretching along 12 km of ridge, and is a firm favourite with serious climbers and Munro-baggers.

The Cuillin can be seen from the roadside, making the drive along the island’s roads absolutely spectacular. Enjoy some of the best roadside views on the journey from Broadford to Elgol.

It’s from Elgol where you can take a boat trip to Loch Coruisk, which lies at the heart of the Cuillin range. Many walkers take one of the boats to the loch and then start their hike through the Cuillin, or you could just explore the surrounding landscape for a couple of hours before returning to Elgol by boat.

In addition, you could explore the Cuillin on foot with the help of an experienced mountain guide. Companies such as Skye Guides or Skye Adventure can safely prepare and lead challenging climbs, ridge traverses, scrambles and walks. 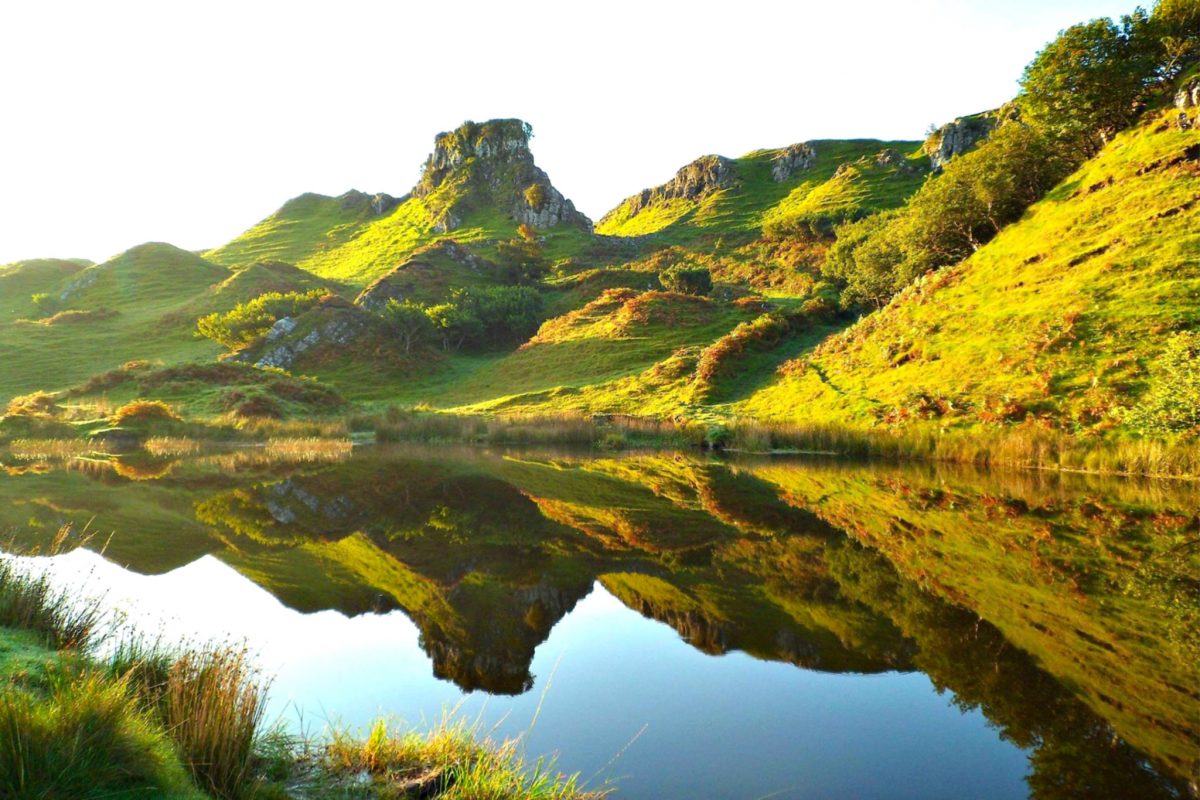 The Fairy Glen is as magical as it sounds – lush and verdant with curious conical hills, a small loch, an ancient ruined castle and unexplained fairy circles made of stones. Also known as Glen Conon, it’s not as grand in scale as the Quiraing or the Storr – this otherworldly glen is like a landscape in miniature.

The Fairy Glen is most easily reached by car. Located in the north of the island not far from Uig, Fairy Glen can be found along a single track road in between the villages of Sheader and Balnaknock. 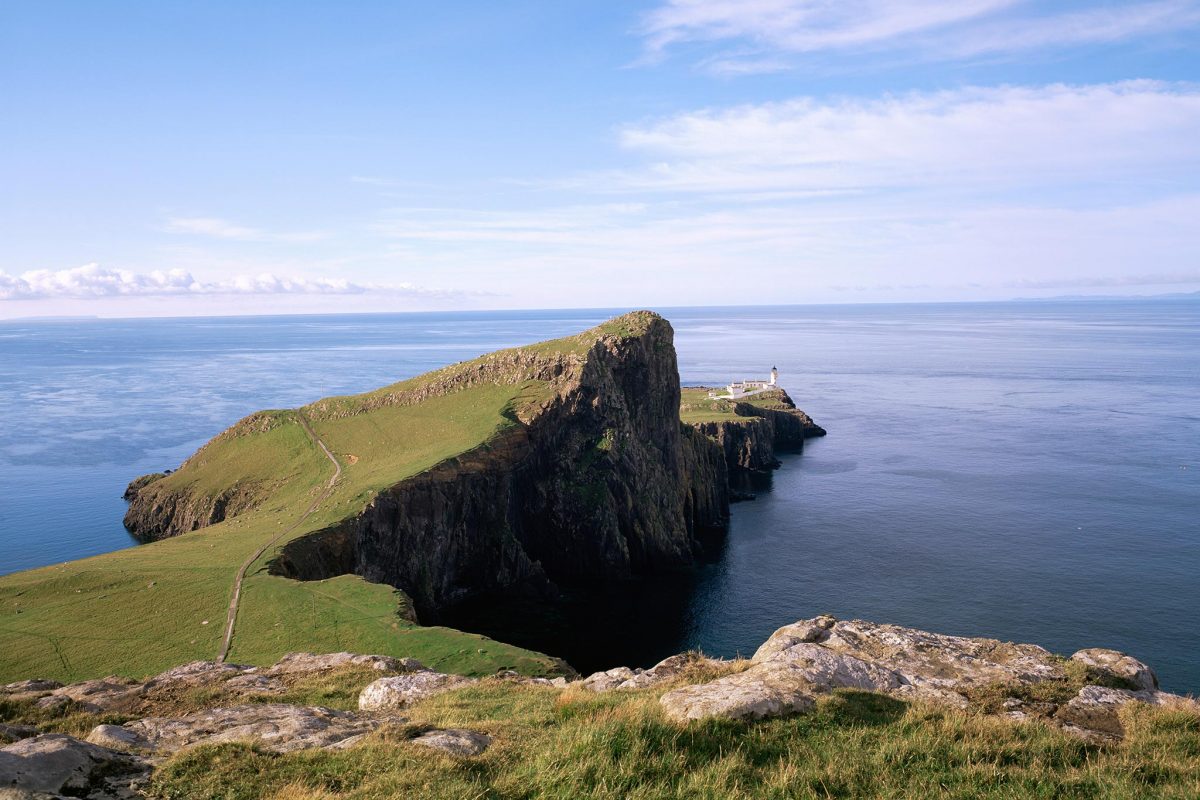 Neist Point is the most westerly part of Skye. It’s defined by striking sea cliffs of jutting rock and is home to one of Scotland’s most-photographed lighthouses. You can follow a path to the lighthouse and enjoy a bracing coastal stroll.

The easiest way to get to Neist Point is with your own transport (or as part of a tour). If coming from Broadford it’s a 50 mile journey following the A87 north, before taking the A863 and the B884. Nest Point is approximately 30 miles from Portree heading north from the town on the A87 north before joining the A850 at Carbost. The final stage of the journey takes in the A863 and the B884. 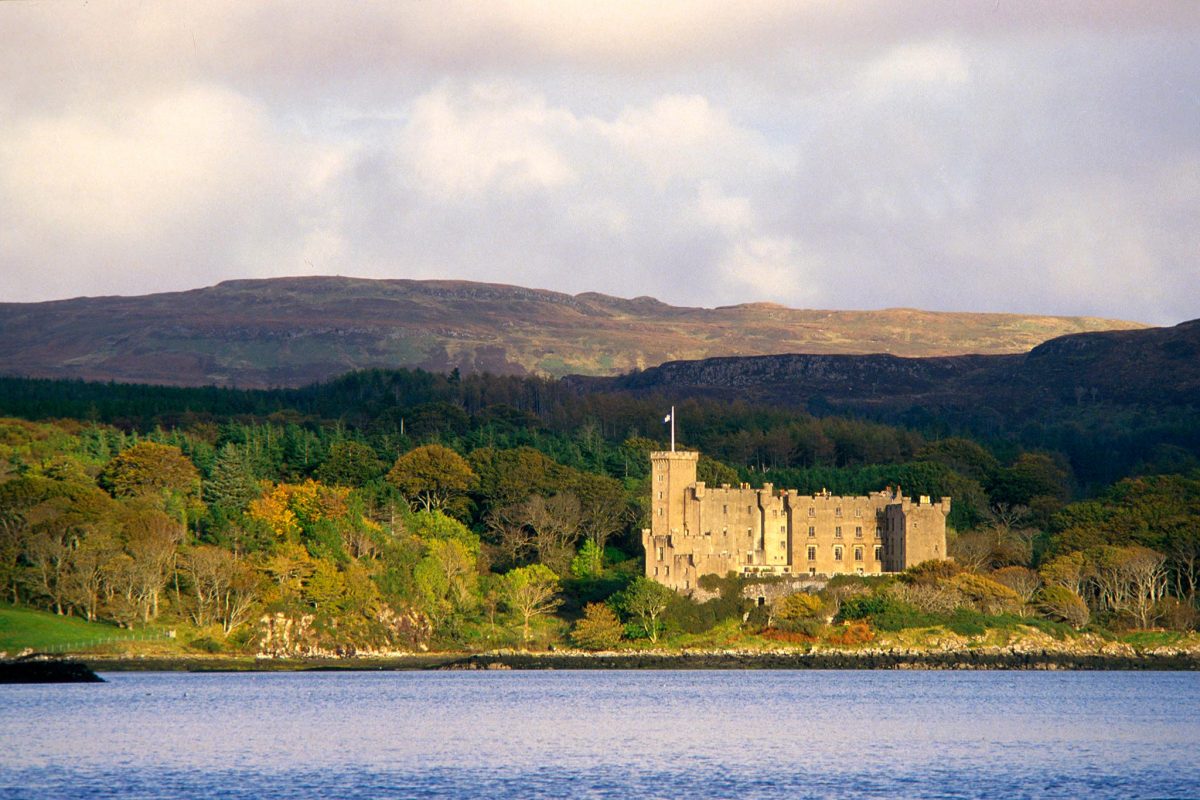 Located in the north west of the island, Dunvegan Castle is the ancestral seat of Clan Macleod and has been inhabited by the same family for over 800 years. The castle is picturesquely set beside a sea loch, surrounded by formal gardens and a sprawling estate.

From Portree, it’s a 30 minute drive to Dunvegan following the A87 and the A850. Local buses also depart from Portree.

Take a boat trip to see the seal colony, wander through the gardens or discover a treasure trove of wonders within the castle wall on a tour.

Are you ready for a set-jetting adventure around one of the most scenic islands imaginable? Check out the Highlands & Skye Movie Map, or find more things to see and do, accommodation, travel information and more on the Isle of Skye. You can also discover other incredible cinematic locations across Scotland!