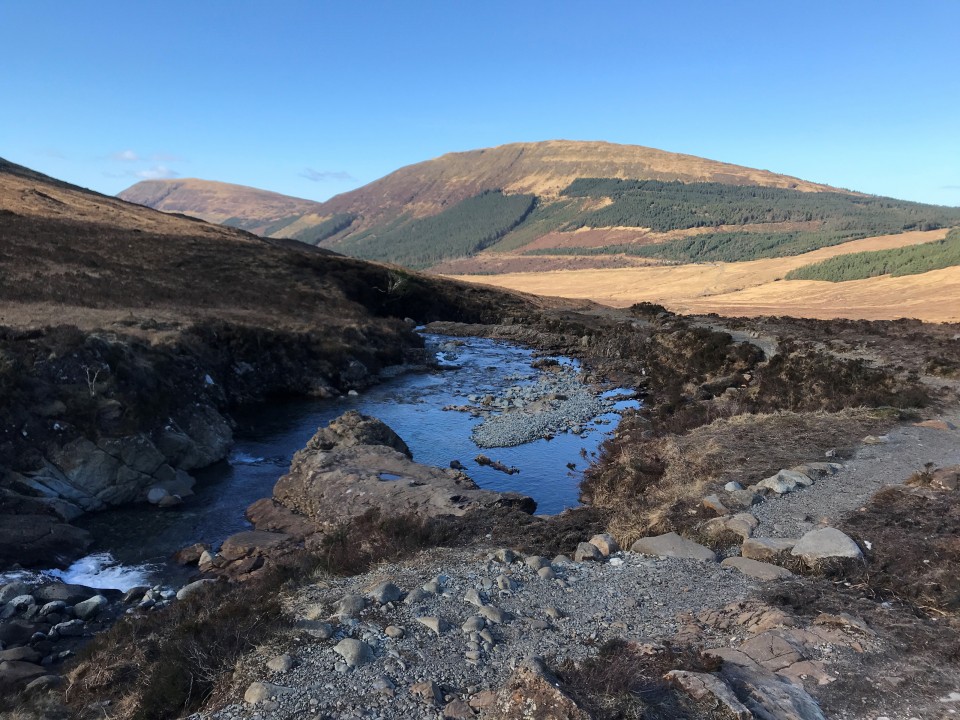 Our stunning 3 day Isle of Skye tour from Edinburgh takes you through the majestic Scottish Highlands to places such as Loch Lomond, Glencoe, and Glenfinnan as we head towards the spectacular Isle of Skye.

On our Isle of Skye tour from Edinburgh we head west to Scotland’s largest city, Glasgow. Soon we’re deep in the Loch Lomond and Trossachs National Park. We’ll make our first stop at the charming village of Luss which sits on the bonnie banks of Loch Lomond. The village was chosen as a Christian settlement by the Celtic Saint MacKessog in AD 510, who was Scotland’s patron saint before St Andrew. It is known that the Vikings passed through Luss in 1263 and went on to plunder the entire area. You can see the hog back gravestone in the churchyard dating from around the 11th century. Today, you’ll find a pretty conservation village with a sandy beach and pier stretching out into the stunning loch. On this small group tour you’ll take in sparkling lochs, tumbling waterfalls and majestic Munros (Scottish mountains over 3000 feet). All on our way to bleak but beautiful Rannoch Moor and Glencoe. We’ll stop for lunch here and you can learn about the infamous Glencoe Massacre of 1692, when the MacDonalds were slaughtered by the Campbells.

Our Highland road trip continues to Fort William, a popular holiday destination sitting in the shadow of Britain’s highest peak, Ben Nevis. From here we will travel west to take in the stunning views of Glenfinnan and Loch Shiel stretching 17 miles out in the distance. Bonnie Prince Charlie raised his standard at Glenfinnan in 1745 in an ill-fated attempt to return the exiled Stuarts to Great Britain and Ireland’s throne. Today the Glenfinnan Monument, with its lone piper on top, proudly honours the Jacobites who died fighting their cause. The Glenfinnan Viaduct is famous for its classic Victorian engineering. It also captured the imagination of a new generation when it appeared in the Harry Potter films. The short climb up to the viewpoint is worth the effort. Not only are there great views but you’ll also see the 21 arches of the majestic Glenfinnan Viaduct curve through the glen in a scene known as the route to Harry Potter’s Hogwarts. Onward to Skye we will travel through Glens Garry, Clunie and Sheil to one of Scotland’s most photographed castles, Eilean Donan. The castle sits on an island at a point where three great sea lochs meet, surrounded by majestic highland scenery. Eilean Donan was used in many films including Highlander and James Bond epic, The World is Not Enough. From here it's a short drive to Kyleakin, your home for the next two nights.

You'll have a full day to explore the amazing Isle of Skye. Your Driver-Guide has the flexibility to ensure you see the best of the island whatever the weather. You can’t miss Skye’s mountain range, the Black Cuillins, which adorn calendars and paintings the world over. The sparkling azure waters of the Fairy Pools lie near their foot in Glenbrittle. They make for great photos, or even a spot of wild swimming! We stop for lunch in Skye’s main town of Portree. We'll then head to the spectacular geological wonders of north Skye and the Trotternish Peninsula. This is a beautiful, if not bizarre, landscape of rocks and pinnacles that will leave you spellbound.

Access permitting, we’ll visit Faerie Glen, a peculiar, miniature landscape of grassy cone-shaped hills and lochans (ponds). It’s said that if you count these hills you’ll find 365 but if it’s a leap year there will be 366! From there we head for the Quiraing, an iconic geological landslip that is on many a traveller’s tick list. You’ll have time to capture plenty of pictures before we move on to the magnificent Mealt waterfall and Kilt Rock. A spectacular 90-metre-tall column of basalt that appears to resemble our national tartan dress. Prior to our return to Kyleakin, we’ll stop for photos at the Old Man of Storr. According to legend, the Old Man of Storr was a giant who lived in the Trotternish Ridge. When he was buried, his thumb was left sticking out the ground, creating this famous jagged landscape.

With the Black Cuillins behind us we depart the Isle of Skye from Kylerhea to Glenelg on mainland taking the short crossing on the last manually operated turntable ferry in Scotland. We'll make a short stop to get some stunning views over Loch Duich and the Five Sisters of Kintail. Next up is Fort Augustus which lies at the southern tip of Loch Ness. There’s time for lunch and a stroll beside the Caledonian Canal, one the world’s great waterways. Or you might like to try to secure photos of elusive Nessie on a one-hour ‘monster-spotting’ cruise. Back on dry land and we take a road trip through the Grampian Mountains, across sweeping ‘Monarch of the Glen’ country. On this final day of your tour we’ll visit a Scotch whisky distillery for a dram if we haven’t managed to visit a distillery on the Isle of Skye. From your panoramic window seat you’ll see the landscape change from moody mountain and moorland to lush forest and woodland not surprisingly known as Scotland’s ‘Big Tree Country’. Keep an eye out for birds of prey and red squirrels. Journeying through Perthshire we’ll pass Blair Castle, ancient seat of the Dukes of Atholl. It's home of Europe’s only remaining private army the Atholl Highlanders. Just a few miles down the road and we’re enjoying our final refreshment stop in the Victorian resort town of Pitlochry. Pitlochry was a favourite of Queen Victoria and Scots novelist Robert Louis Stevenson.

We return to Scotland’s capital city Edinburgh ending our 3 day Isle of Skye tour via the Queensferry Crossing. Opened on 30 August 2017 and costing over £1.3 billion. This 2.7 km structure is the longest bridge of its type in the world. As you cross, look left for a great view of Scotland’s most famous structure, the Forth Bridge. Its three red cantilevers carry the rail line over the Firth of Forth. The Forth Bridge has been declared a UNESCO world heritage site. This places it on a par with the Great Wall of China and the Taj Mahal.