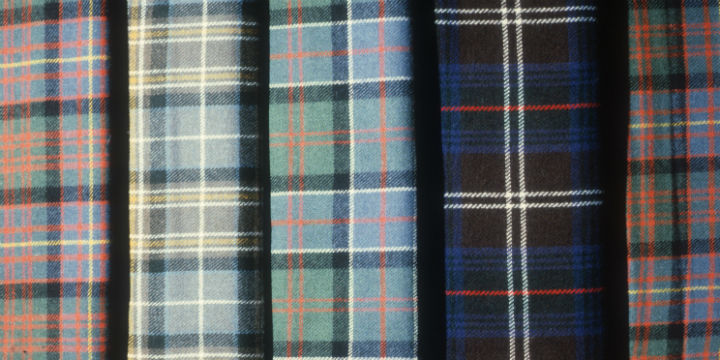 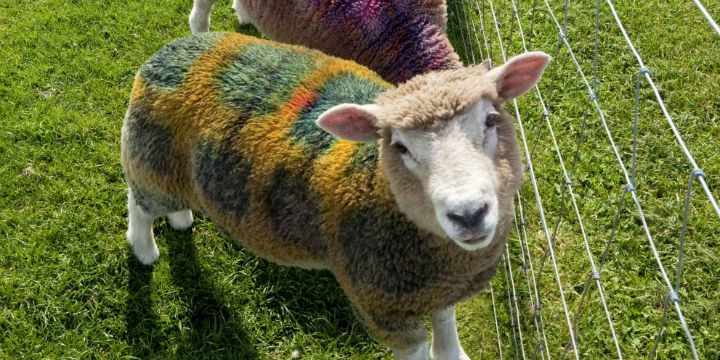 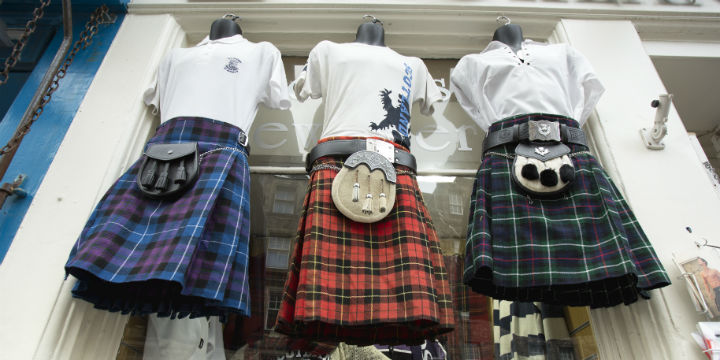 Kilts on sale in Edinburgh

Look out your kilt or tartan trews – Sunday 6 April is Tartan Day, a chance for Scots both at home and overseas to celebrate their rich cultural heritage. Coinciding with the anniversary of the Declaration of Arbroath, Tartan Day began in Canada in the 1980s and has since seen parades, ceilidhs and celebrations pop up all over North America, including the world-famous Tartan Day Parade in New York.

Here in Scotland you’ll find a range of great Tartan Day events for Homecoming 2014, particularly in the region of Angus, where the Declaration was signed in 1320. And with tartan having recently made a return to the runway – Mulberry, Yves Saint Laurent and Versace have all unveiled colourful plaid designs for 2014 – you can celebrate in style! Have a look at these fun facts to find out more about Scotland’s favourite fabric:

1. Love Me Tartan: Elvis Presley has no less than three tartans to his name. The singer is said to have roots in Lonmay, a tiny village in Aberdeenshire, and in 2004 local designer Mike King created an official Presley of Lonmay tartan in his honour followed by a modern version a few years later. The Scottish Tartan Registry also lists the Presley of Memphis tartan by Brian Wilton, which is based on the colours of the US flag with a gold stripe to represent Elvis’ multiple Gold Discs. It even has a thread count of 42 – the age the King was when he died.

2. One giant leap for tartankind: Alan Bean, an American astronaut of Scottish descent, took a little piece of MacBean tartan up to the moon during his Apollo 12 mission in 1969. Despite some rumours to the contrary, he didn’t leave his clan’s colours to float around in space forever: he took the material back to Earth and donated it to Clan MacBean and to the St Bean Chapel in Fowlis Wester, Perthshire.

3. Tartan trendsetters: Nowadays Queen Victoria may not be known as a fashionista, but she’s partly to thank for tartan’s popularity today. A fan of all things Scottish, she turned up to the Great Exhibition in 1851 with her young sons, Albert and Alfred, decked out in full Highland attire. Sales of plaid went through the roof, and became a particularly popular choice for schools. Since then tartan has been seen on uniforms not only in the UK, but also in countries such as the US, the Philippines and Japan.

4. Big in Japan: Speaking of the Japanese, they’re amongst Scotland’s biggest fans when it comes to fashion. The country is the largest international importer of the Outer Hebrides’ famous Harris Tweed, and tartan is a staple of Japanese street and runway fashion – designer Jun Takahashi once had models strut down the runway painted from head to toe in plaid. The country has had several tartans dedicated to it; Hello Kitty even has her very own design!

5. Unewesual designs: Scotland is home to a rare species of tartan sheep. Well, sort of – the talented owners of the East Links Family Park near Dunbar and the Auchingarrich Wildlife Centre in Perthshire have been known to paint their sheep tartan for Tartan Day and other events. The sheep have become a tourist attraction in their own right – the Auchingarrich flock even featured in an episode of Come Dine With Me!

6. The original rebelwear: Tartan and kilts were banned under the 1746 Act of Proscription in an attempt to control the Highland clans that had supported the Jacobite Risings. Those suspected of supporting the enemy cause were asked to take an oath stating that they would “never use any tartan, plaid or any part of the Highland garb, and if I do so, may I be cursed in my undertakings, family, and property – may I never see my wife and children, father, mother, and relations – may I be killed in battle as a coward, and lie without Christian burial in a strange land, far from the graves of my forefathers and kindred”.

7. Police in plaid: Black and white checks can be seen on police uniforms and vehicles all over the world, but did you know the design is technically a type of tartan? Named ‘Sillitoe Tartan’ after Chief Constable Percy Sillitoe of the City of Glasgow Police, the checks were first used by police in Scotland in 1932. Their use has since spread to police forces in parts of Australia, Spain, the USA, Hong Kong and several other countries.

8. Woven words: Like many English words, we nabbed ‘tartan’ from the French. The name comes from the word tiretaine, stemming from the verb tirer (to pull). The term also has links to the Spanish tiritaña, a type of silk cloth, and the Gaelic breacan, meaning plaid or speckled.

9. Pricey patterns: Peebles knitwear firm Holland & Sherry are proud creators of the world’s most expensive tartan – a luxury blend woven from pure Mongolian cashmere that will set you back £500 a square metre, or £5,000 for the full kilt. Don’t re-mortgage the house just yet, though! Kilts normally cost between £150 and £500, depending on the quality and length of the material, and you can get a lightweight version for a reasonable £50.

10. Not just for Scots! One popular misconception about tartan is that you have to be a card-carrying clansman to wear a family tartan. In fact, tartans didn’t become associated with specific clans until the 19th century; before that people picked their plaids based on colours, just as they do now. If you do want some personal connection to your design, you’ll probably be able to find one regardless of whether or not you have Scottish roots – countries from the Congo to Zimbabwe and beyond have their own national tartans, as do each of the US States and Canadian provinces.

Unbe-weave-able! Find out more with our guides to tartan, clans and culture, and make sure you don’t miss out on the Tartan Day Scotland celebrations in Angus and other parts of Scotland.