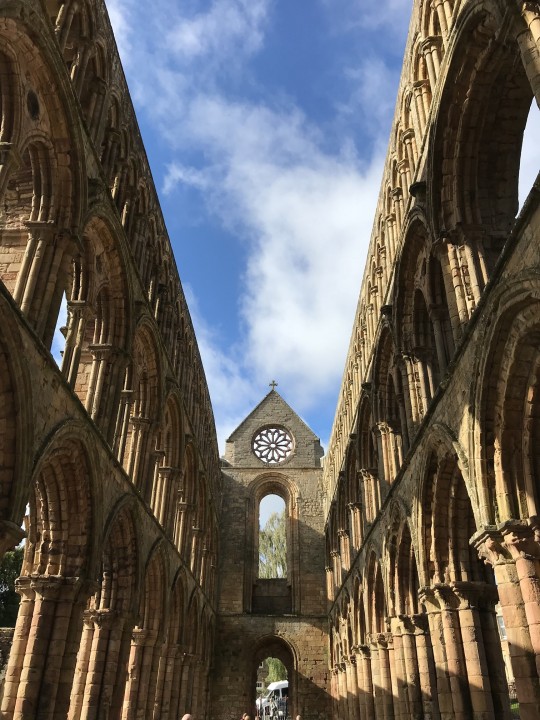 Melrose Abbey is the largest of the spectacular Borders Abbeys and most famously the burial place of the heart of King Robert the Bruce. The Abbey was founded in 1136 at the request of King David I but destroyed on several occasions during the Wars of Independence and subsequent English border raids over the following centuries. The Abbey was eventually abandoned following the Reformation in the 16th Century. Today its ruins are described as the finest example of medieval architecture anywhere.

The Borders town of Melrose has a beautiful picture postcard High Street with charming shops, cafes and restaurants. Enjoy and take in the atmosphere of this historic town.

Jedburgh Abbey founded only 2 years later in 1138 by David I and Bishop John of Glasgow stands on an elevated position in the centre of this picturesque Borders town of the same name. By building such grand and imposing buildings close to the English Border it was a clear statement of intent that Scotland would defend itself against aggression. The Abbey Church was at the cutting edge of 12th Century building technology and remains a magnificent, impressive and awe inspiring structure to this day. Famously during the ‘rough wooing’ in the mid 1500’s the Abbey was successfully defended against the English by French forces under the command of General d’Esse as part of the ‘Auld Alliance’ between Scotland and France.

Mary Queen of Scots House in the centre of Jedburgh tells the story of Scotland’s most iconic monarch apart from Robert the Bruce. Mary became Queen aged only 6 days old upon the death of her father James V. To protect her from a forced union with Henry VIII’s son Edward she was sent to France where she became Queen Consort at the age of 15 following her marriage to Francis II. Francis died a few months later and Mary returned to Scotland. Eventually forced to abdicate in favour of her one year old son, the future James VI and I, the house tells her incredible story and contains several personal artefacts including one of the death masks made following her execution by Elizabeth I in 1587.

Jedburgh contains many historic buildings including Jedburgh Castle Jail and the courthouse where Sir Walter Scott first appeared as a criminal advocate in 1793.

Jedburgh also contains the house where Bonnie Prince Charlie stayed in November 1745 prior to his invasion of England.

At Beirhope Farm set in the breath taking Cheviot Hills you can have the opportunity to meet, greet and trek with alpacas. Alpacas originate from South America and are easily confused with llamas with whom they share many similarities. These friendly animals are a joy to be around and the infectious enthusiasm of their owners will have you not wanting to leave.

This is a full day tour where lunch can be taken in a variety of locations in Jedburgh. Please note, Jedburgh Castle Jail and Mary Queen of Scots House are closed from November to February. Contact us for more information.