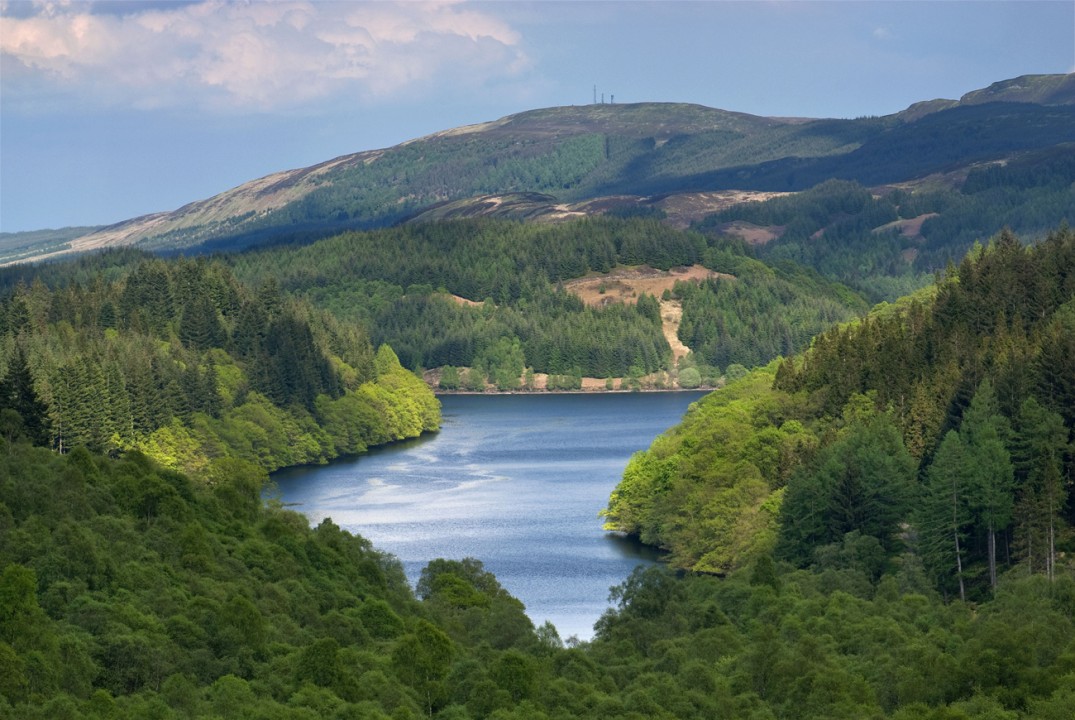 Sit back, relax and admire the beauty and tranquillity of Loch Lomond and the Trossachs National Park. With picture postcard views at every corner, its forest covered mountains and shimmering highland lochs will take your breath away.

Departing from Greenock Ocean Terminal, your luxury mini coach transports you to Luss, one of Scotland’s prettiest highland villages sitting on the bonnie banks of Loch Lomond. As you stroll around the village you’ll find rows of little cottages that come alive in spring and summer with over-flowing floral displays. These avenues of blooms will lead you to the pier where you can enjoy panoramic views of Loch Lomond and of Ben Lomond on the other side.

Although developed in the 18th and 19th centuries to house workers from nearby slate quarries, there has actually been a Christian settlement here for at least 1500 years. The village’s beautifully restored Church, founded by Celtic Saint MacKessog, makes for a fascinating visit. The ancient graveyard is even more curious. We know that the Vikings, led by King Haakon, passed through Luss in 1263 as they plundered local communities. In the churchyard you’ll find an example of their ‘hogback’ grave, a stone sculpture thought to date back to that 1263 raid.

From Luss our small group tour heads through the dramatic Dukes Pass, one of Scotland’s most scenic drives, deep into the Trossachs, dubbed the ‘Highlands in miniature’ thanks to their outstanding beauty.

The name ‘Trossachs’ comes from the Gaelic meaning ‘the bristly country’. Its thick forest, gushing waterfalls and tranquil lochs were the backyard of one of Scotland’s most notorious outlaws Rob Roy MacGregor, who gained notoriety as a bandit and soldier but ended up a Scottish folk hero. He’s immortalised in the film Rob Roy and in the historical novel of the same name by Sir Walter Scott, who was also inspired by this wild, romantic landscape to pen his epic poem Lady of the Lake.

A tour of Scotland wouldn’t be complete without photographs of our unofficial mascot, the long-horned Highland cow. Your friendly driver-guide will be sure to point out our ‘hairy coos’ on your journey.

We stop for lunch in the bustling tourist town of Callander. Crammed with teashops and souvenir opportunities, Callander is often described as ‘the gateway to the Highlands’.

After lunch we’ll make a short stop for photos at Doune Castle which dates back to the late 14th century. Cult comedy Monty Python and the Holy Grail turned it into Swamp Castle, Castle Anthrax and Camelot. More recently this picturesque keep was cast as Winterfell in Game of Thrones and the MacKenzie ancestral seat of Castle Leoch in the TV adaption of the Outlander novels.

From an atmospheric ruin to splendid Stirling Castle, one of the best preserved Renaissance buildings in the country which has been returned to its original glory. Follow in the footsteps of Scotland’s Stuart Kings, of Mary, Queen of Scots and of Bonnie Prince Charlie.

You’ll have enough time for a leisurely visit to the castle to learn about key moments in Scotland’s long, violent and bloody history. It wouldn’t be a Scottish castle if it hadn’t witnessed some historic battles. In its shadows are the sites of the Battle of Stirling Bridge where William Wallace (of Braveheart fame) defeated a much larger English army in 1297, and Bannockburn where Robert the Bruce did the same in 1314.

Leaving Stirling Castle we head west and, time permitting, make a quick stop in Glasgow’s most famous square, George Square. Here your friendly driver-guide will give you a flavour of Scotland’s most vibrant city and point out its stunning architecture before dropping you off at the port of Greenock where your excursion ends.