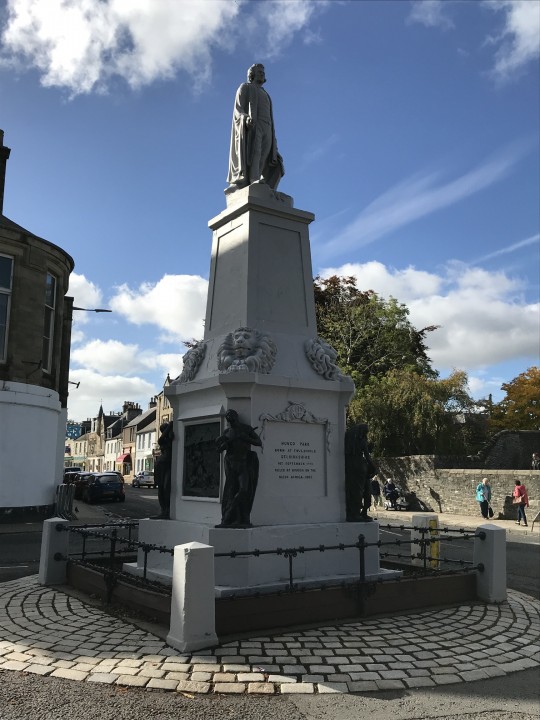 Abbotsford House is the home built by lawyer, historical novelist, playwright and poet Sir Walter Scott whose works are considered classics of the English language. Scott was significant in the rebirth of Scottish national identity following a period of time when Scotland was referred to as ‘North Britain.’ Scott’s novels were widely read and his style had considerable influence throughout Europe and America. He was once the world’s most famous and biggest selling author. Scott is probably most notable for popularising tartan following a time when wearing it had been illegal. The house and gardens are closed from December to February however the visitor centre is open all year round.

The historic town of Selkirk is where legend states that William Wallace was made Guardian of Scotland in 1298. In the ancient churchyard the maternal ancestors of US President Franklin D Roosevelt are buried. Visit Halliwell’s House Museum one of Selkirk’s oldest buildings. See the courtroom where Sir Walter Scott sat as Sheriff and dispensed justice. Take in the history of this historic Borders town. The Lochcarron Experience enables you to see how the world’s leading manufacturer of tartan makes fabrics and gives you the opportunity to purchase products from cashmere to lambswool.

Bisley at Braidwood is Scotland’s largest Clay Pigeon shooting range. The facility caters for people of all ages, from 10 years upwards, and abilities with no prior experience necessary. Apart from clays Bisley also offer an airgun range, rifle range and virtual reality simulated shooting. Fun and competitive you will leave grinning from ear to ear.

Born in the Borders is a unique farm based micro-brewery where all the ingredients to make the beer are grown on the farm surrounding the brewery. Bottling even takes place on the farm which boasts many other facilities such as two shops supplying local produce, a restaurant, riverside walks and brewery tour. A recent addition is Lilliard, a small batch craft gin distillery, named after a local heroine of the Battle of Ancrum Moor in 1545.

The Borders Distillery in Hawick is one of Scotland’s newest and is the first in the Borders since 1837. Opening its doors in March 2018 and housed in a fully restored Edwardian power station the distillery is a superb visitor attraction. Currently the distillery produces Clan Fraser Reserve and Lower East Side blended whisky. It also produces Kerr’s gin after the famous Borders botanist William Kerr. Hear how you build a distillery and see how whisky is fermented, distilled and matured before sampling ‘the water of life.’

Hawick was once the textile capital of Britain employing thousands in its mills producing wool, carpets, tweed and cashmere and reached its peak in the 1960’s. Much has now changed however several luxury cashmere, tweed and wool manufacturers remain where quality textiles can be purchased as either gifts or to wear yourself.

This is a full day tour where lunch can be taken in Selkirk. Contact us for more information.Selkirk.