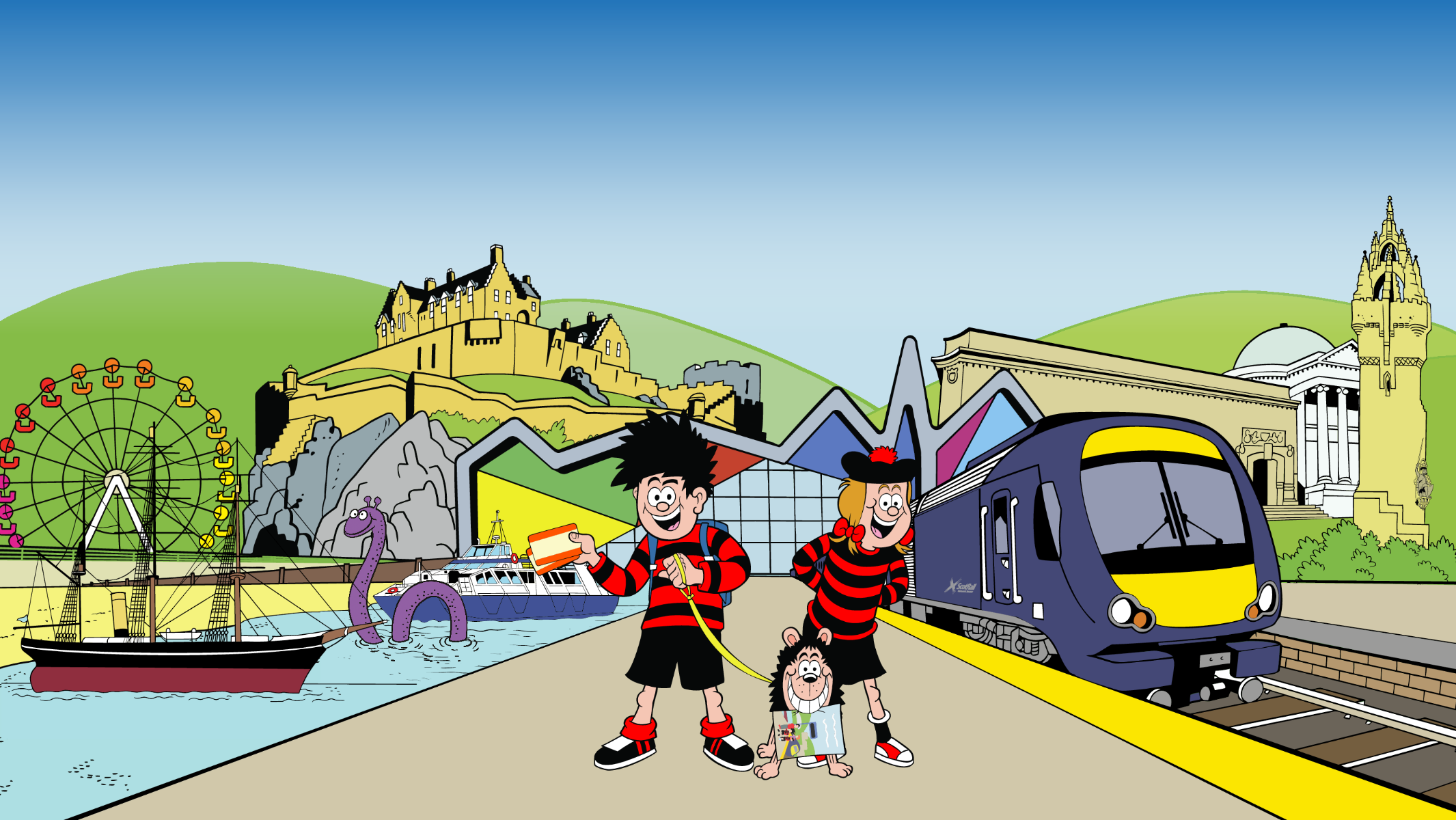 Blam! Dennis here, I’m happy to say that Gnasher and I have finally got the day off school.  It’s been full on lately and I think I need a holiday from my epic pranks. Pieface, JJ, and Rubi said I should go on an blam-tastic trip somewhere in Scotland to relax, so I pulled out a map and stuck my finger on the first place that caught my eye: Aberdeen. My number one enemy Walter Brown will be uber jealous when he hears what I got up to on my travels!

Here’s my diary of my big day out in Aberdeen and maybe you can follow in my footsteps. 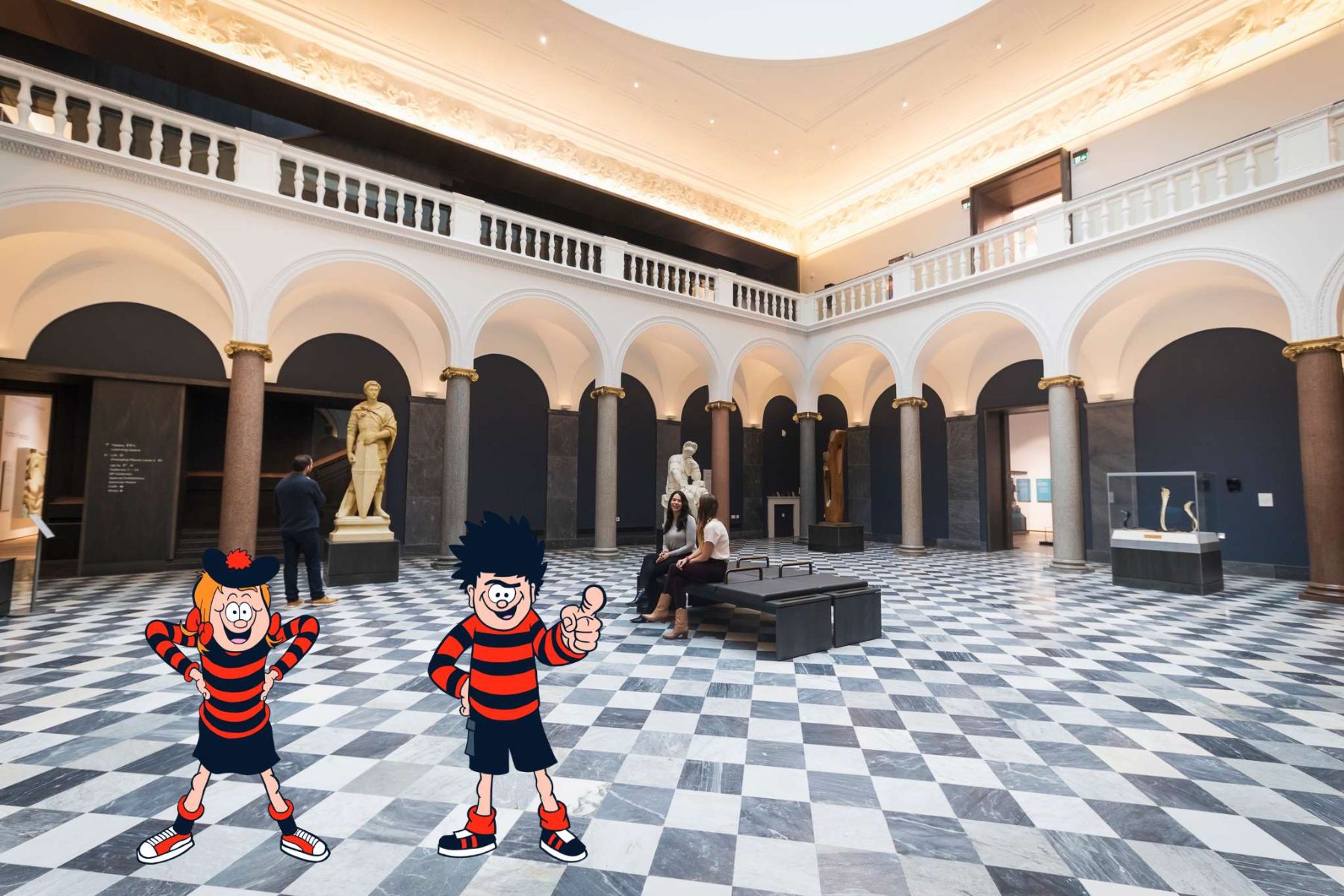 It was an early start in Beanotown for myself Mum, Dad, baby sister Bea, Minnie and not forgetting Gnasher – but Aberdeen was just a train ride away. Mum and Dad had found out about ScotRail Kids for a Quid tickets, so they can take me anywhere in Scotland by train for just £1 return!  And it means more money for treats – blam-azing!

The train ride was exciting for everyone, seeing all the Scottish countryside and the coastline out the window. Trains are the best – the only way to travel I’d say… well, unless you have a skateboard.

Arriving in Aberdeen I was itching to get on my skateboard and explore, and it was totally epic to see all the granite buildings sparkling in the sunshine. Our first stop was Aberdeen Art Gallery and I was super stoked to get in touch with my creative side – well I am in a band called Dennis and the Dinmakers.

The gallery was awesome – all types of art from different time periods and a cool Sculpture Hall. My eye was drawn to things in red and black, of course, and I was thinking, maybe I could do a painting and they could hang it here? A self portrait of me and Gnasher would be a genius idea!

We stopped off in the rooftop café after exploring the gallery, to grab a refreshment, the hot chocolate was blam-tastic. Where to next? 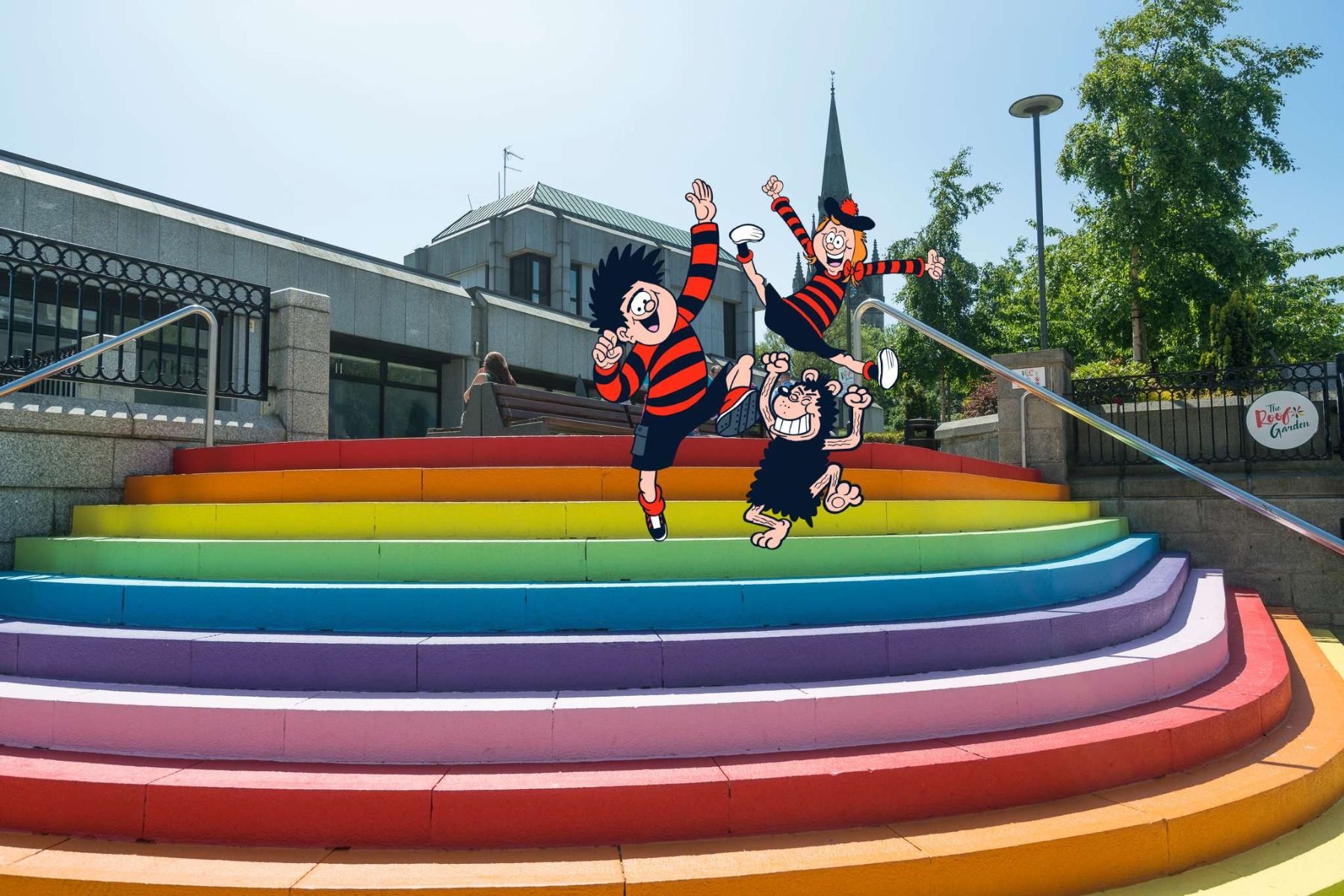 Science? Woah, I was thinking is this going to be like school? But you know what? I was surprised to find it was a totally blam place for kids like me! The Aberdeen Science Centre was split into six zones with interactive exhibits, a theatre and even a talking robot. All the kids at from school will be raging when they hear about this adventure!

I don’t need to tell you that I have an amazing imagination and this Science Centre was sparking all kinds of interesting thoughts in my brain. I was thinking about space travel, DNA and especially thinking about renewable energy and how to make the world a better, greener place. By riding the train to Aberdeen instead of going in the car I’ve already done something good for the planet today. How blam is that!

You know what else is blam? You can even have a birthday party at the centre and I was thinking about how JJ, Rubi and Pieface would love it. Obviously, I asked Mum and Dad if we could stop for another hot chocolate and a bite of cake at the onsite café but they had other ideas. 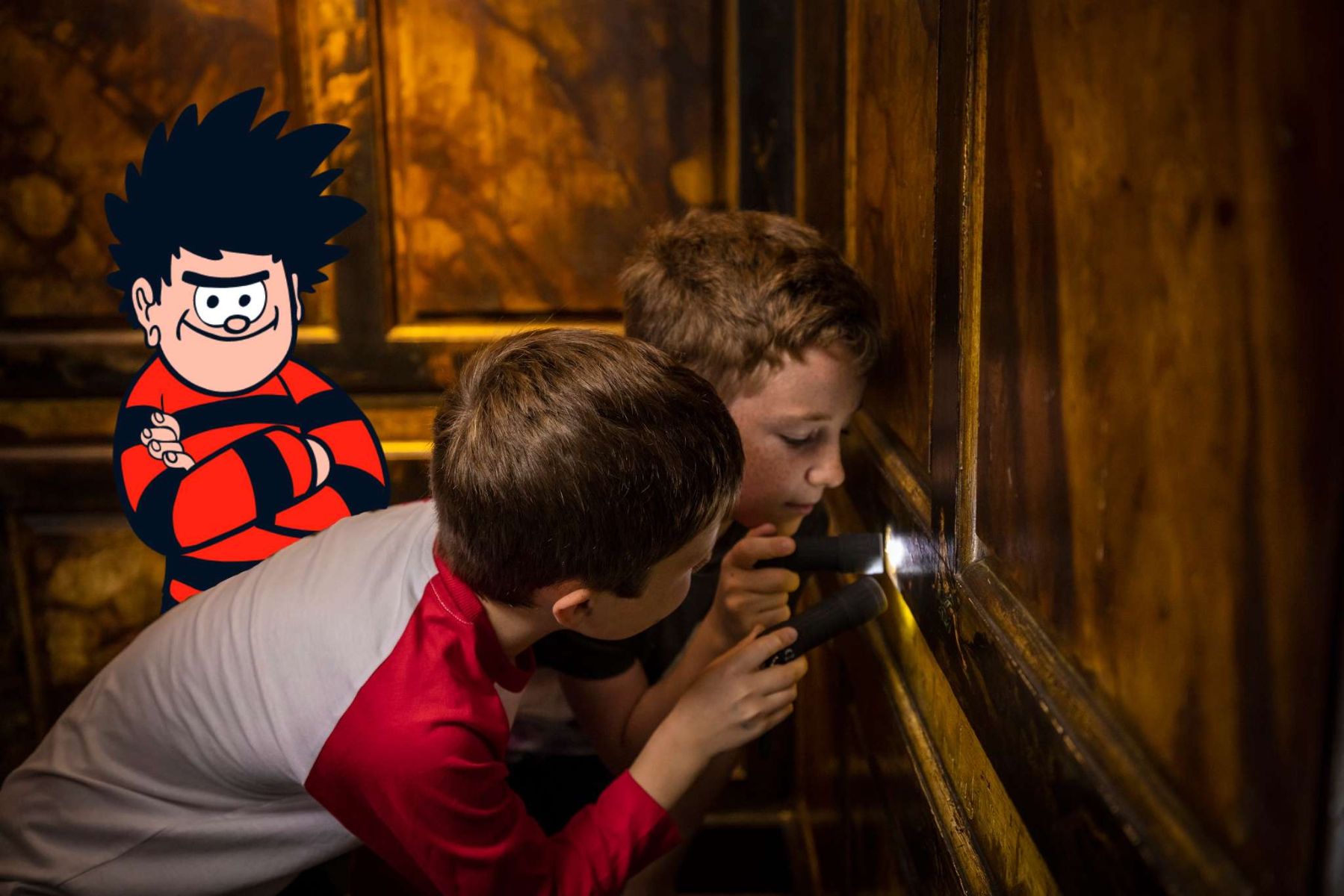 This was turning into a totally bla-mazing day out in Aberdeen, which is probably my favourite city ever now. Our next stop was Provost Skene’s House who was some wealthy old dude who lived in the city hundreds of years ago.

Nowadays the building celebrates the pioneering people of the north east who have transformed the world. This includes scientists, life savers, writers, sporting champions and acting stars. It was pretty fascinating stuff and I was especially interested in footballing legend Denis Law – ‘cause I’m quite good at football myself you know.

There were loads of displays to listen to and watch as well as hands-on activities for me and baby sister Bea. It was kind of nice to be at a place that Mum and Dad could enjoy too (even though I wouldn’t tell them that)! 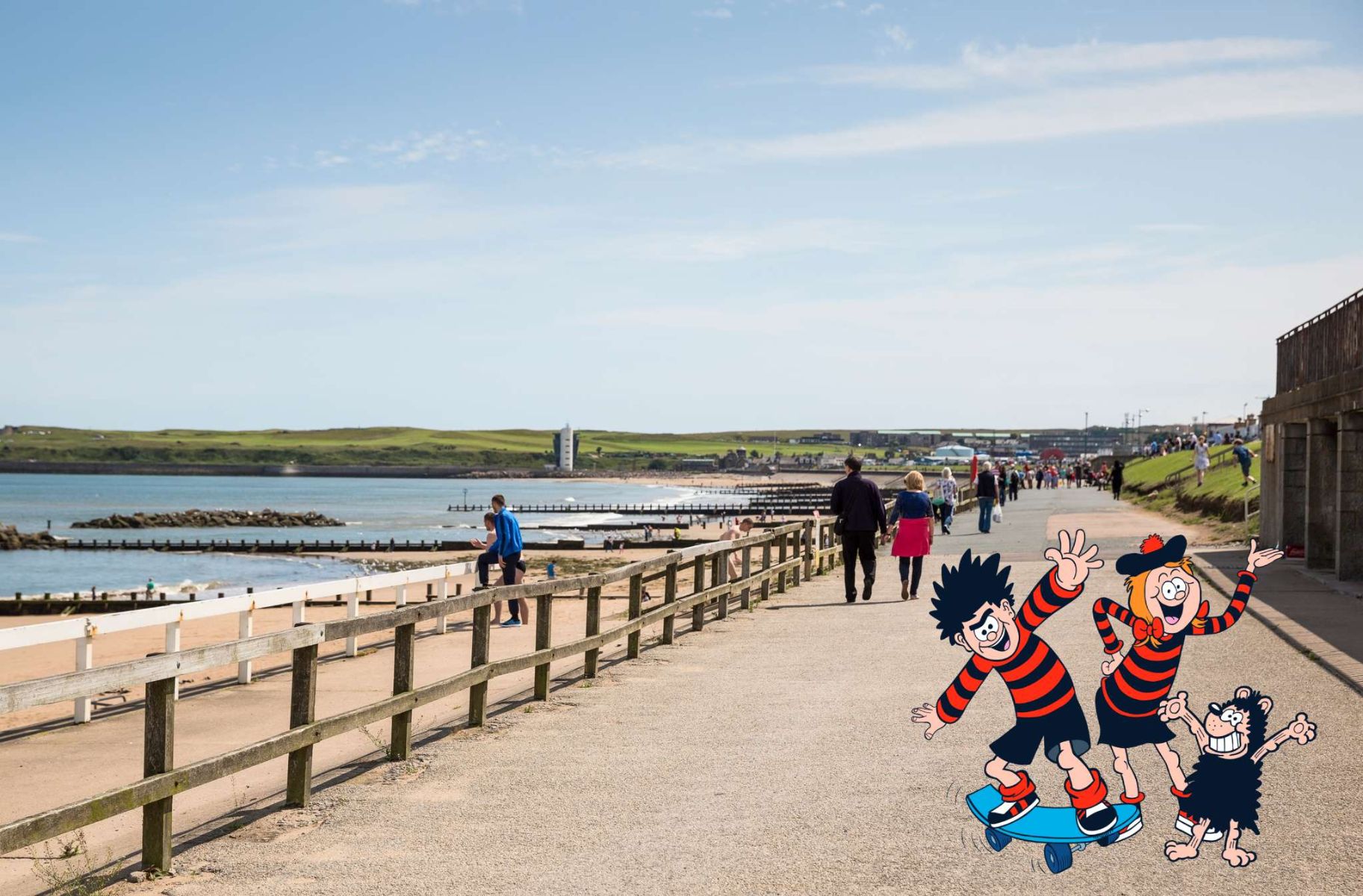 Now for my last (and favourite) stop of the day before heading back to Beanotown – I didn’t really want to go home yet to be honest. Mum and Dad said we all deserved a treat for being so good – even Gnasher. So, we made our way to Mackie’s 19.2 – one of the most excellent places for ice cream in Scotland.

There was such a good selection of ice creams and other things to eat that I didn’t know where to start. Should I go for ice cream, sorbet, cannolii, ice cream lollies, crepes or waffles?  Gnasher was drooling and licking his lips. In the end I went for three different flavours and ate them all in one go. It was totally delish, and I didn’t even spill a drop on my jumper.

Any day that finishes with ice cream is a great day in my book, and it goes without saying that Aberdeen is a brilliant city. And it only cost £1 to get here with my Kids for a Quid ticket from ScotRail! There was loads to do and I will definitely be coming back with my friends one day. I’m even going to learn a bit of Doric, which is this cool language that Aberdonians speak.

Well, it’s back to school tomorrow and I will have some great tales to tell everyone. But you know what? I can’t actually wait for my next holiday, and I’ve been searching the VisitScotland website for more blam places to go in Scotland by train. I’ll let you know when me and Gnasher travel again – look out for my next diary.