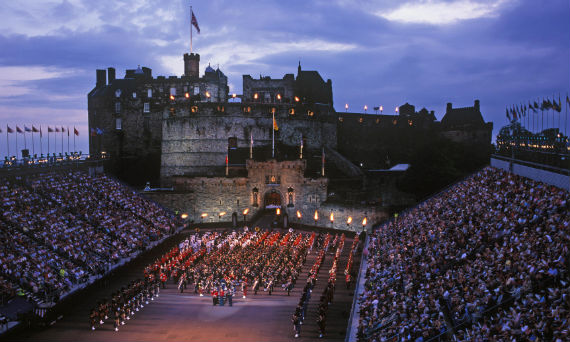 The first time I ever went to a gig at Edinburgh Castle, ladies three times my age were throwing their underwear on stage – a sure sign that Sir Tom Jones was in town. Yes I did see Tom Jones live and I’m not even a little bit ashamed to admit it (I even bought a t-shirt).

Anyway, moving on swiftly…very exciting news came out yesterday that Scotland’s very own Emeli Sandé, who so far has a number one album in the bag, two number one singles and a Critics Choice award at the Brits is to headline a free concert at the castle to celebrate the arrival of the London 2012 Olympic Torch in our wonderful capital.

There can’t be many other places throughout the world where you can watch some of the best live music around, in the grounds of a historic castle, on top of an extinct volcano. Trust me, it’s a very special venue.

The concert is set to take place on June 13, Day 26 of the Olympic Torch Relay, which begins the day in the picturesque town of St Andrews and arrives at the castle before the evening celebrations begin. Sandé will headline with some more fantastic acts set to be announced over the coming weeks.

Previous artists to play this truly unique arena, which underwent a £16 million revamp just last year, include Elton John, Paul Simon, Arcade Fire and Blondie. This July, we look forward to welcoming Olly Murs and Noel Gallagher’s High Flying Birds – it’s shaping up to be another great summer packed full of events and festivals in Edinburgh, the ‘world’s festival capital’.

I for one can’t wait, I’ll see you at the t-shirt stand.