One of the best ways to revitalise your senses is on a bike-packing break in Scotland, at a pace where you have time to absorb and appreciate your surroundings. And there’s no shortage of trail options to choose from in this big country.

Rather than driving here, go stress-free and take the train, so you arrive at your trailhead calm, carefree and car-free!

To give you some ideas, here are 7 multi-day routes for experienced riders that will set you on your Scottish bike-packing odyssey, using train and bike. 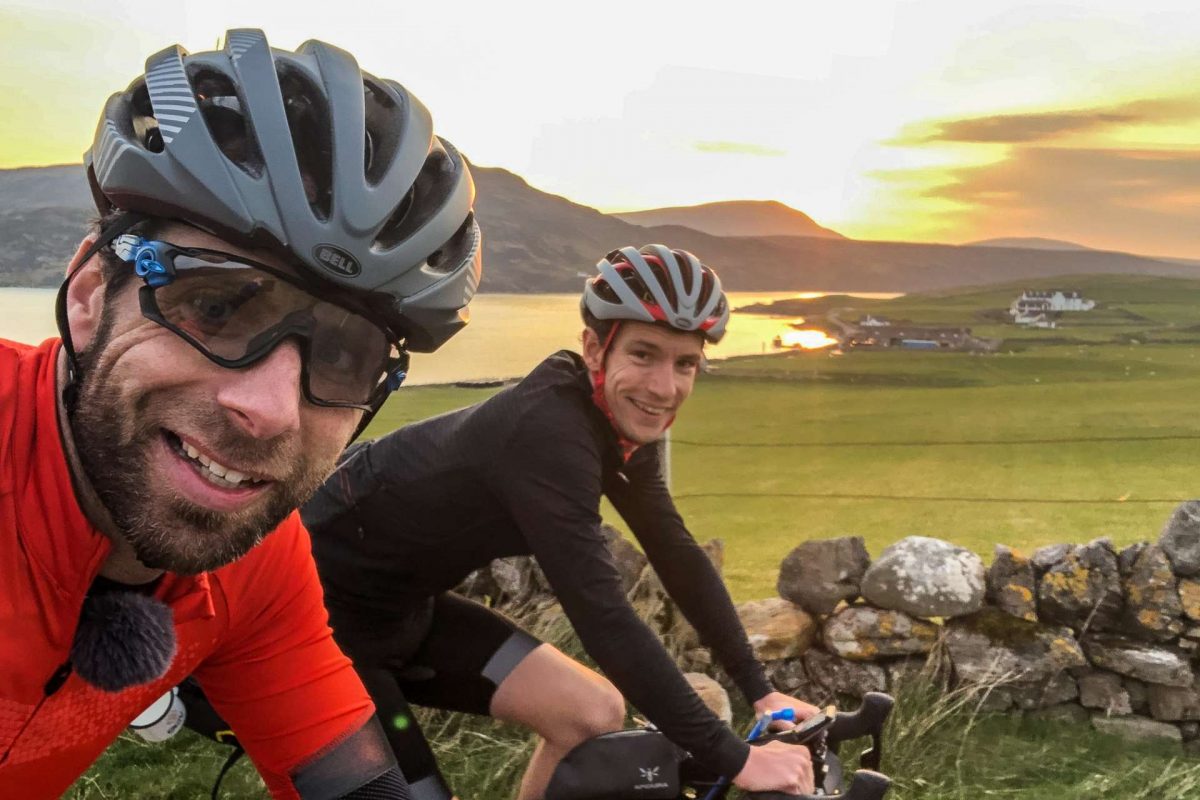 In 2015, Scottish multiple record-breaking round-the-world cyclist Mark Beaumont rode the North Coast 500 in a superhuman 38 hours. He felt however that some parts could be more cyclist-friendly and in 2019 decided to develop an alternative 505-mile option that’s better for bike-packers.

To bring it to life, he partnered with Si Richardson from Global Cycling Network and made a captivating film about his 3-day trip. Don’t worry though, the 3-day target isn’t mandatory! In fact, we’d recommend you take at least a week and enjoy the sights and sounds of this very special part of Scotland.

The Highland capital of Inverness, with its modern and busy railway station, is a great place to start and finish, though there are station stops along Mark’s route up the east coast to Brora and between Strathcarron and Inverness in the west.

Our next route is 146 miles long and starts from Tulloch Station near the small hamlet of Fersit. It journeys into the Cairngorms National Park, before heading south into Highland Perthshire. We recommend 4 days for this one.

Station Lodge at Tulloch Station is a great overnight option before starting this epic. From there, the first day’s route heads through Ardverikie Estate and along lochs Laggan and na h-Earba via good forest trails and easy tracks, which you might recognise from BBC TVs Monarch of the Glen. Then it’s south-east at the head of Loch Laggan, later following the River Pattack to Ben Alder Lodge on the shores of Loch Ericht. After a few more miles you’ll reach Dalwhinnie for an overnight and possibly a wee tour of the distillery and a dram.

Day two starts on the flat and historic General Wade’s track through Glen Truim leading to Kingussie and the historic Ruthven Barracks – well worth a visit. The route then heads through Inshriach Forest and on to stunning Loch an Eilein with its 13th century island castle, before emerging onto the B970 at Inverdruie, where it’s a short cycle into Aviemore for an overnight.

From Aviemore, head south west past lochs Alvie and Insh to arrive again at Kingussie, before heading down Glen Tromie and the Gaick Pass. At Dalnacardoch, follow NCN7 – Lochs & Glens North – to Calvine and Blair Atholl. 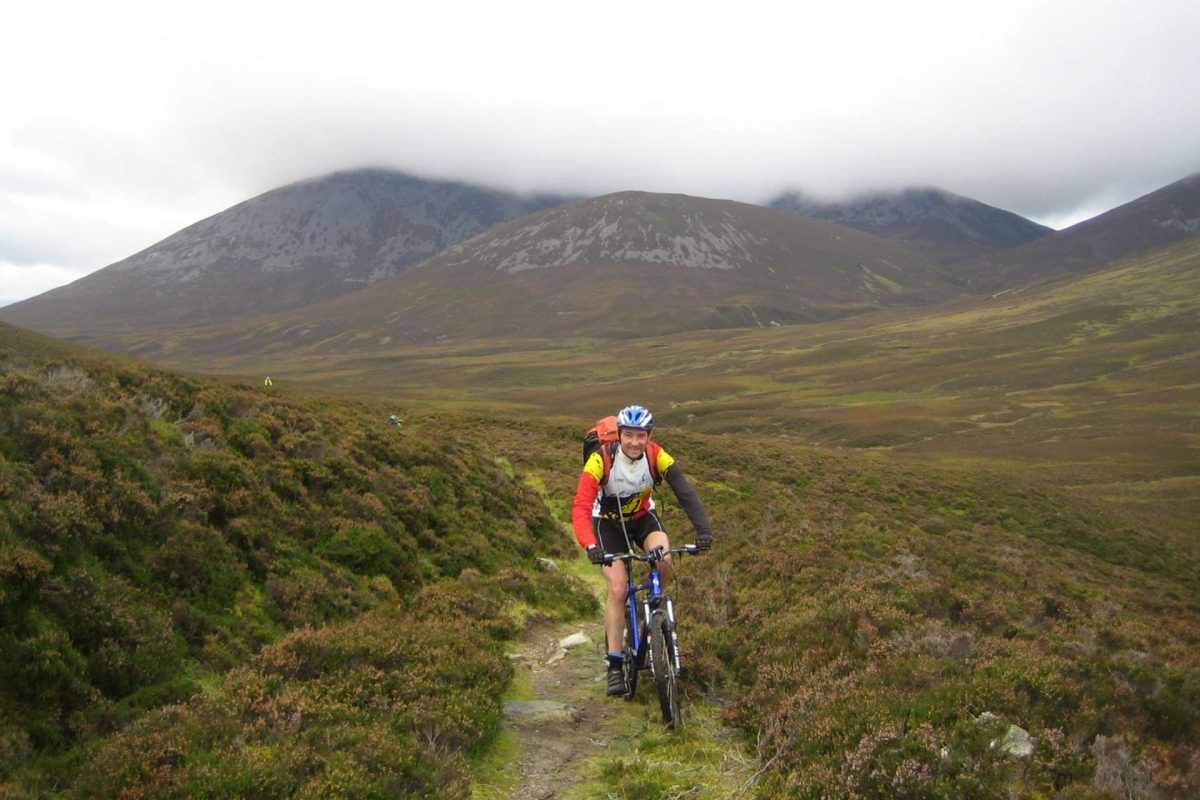 The final day’s route leaves Blair Atholl and heads over moorland in the shadow of Beinn a’ Ghlo and through Gleann Fearnach. Then it’s through Enochdhu, following the waymarked Cateran Trail down the west bank of the River Ardle to Kirkmichael, before going west and south-west past Lochan Oisinneach Mor and Loch Ordie. The track from Loch Ordie into Dunkeld offers some nice descents and lovely views over Highland Perthshire. Dunkeld & Birnam Station is a short cycle from Dunkeld.

Thanks to Tony Wragg and Hugh Stewart who provided this route information from their new book Mountain Biking Adventures: multi-day routes in northern Britain.

This spectacular 65-mile loop is an ideal two-day trip starting from the Highland town of Fort William, taking in breathtaking views along the way, some of which you might recognise from the silver screen.

From Fort William Station, cycle a short distance through the town to Fort William pier and the Camusnagaul Ferry. The crossing only takes 10 minutes and drops you by the quiet A861. Follow this south for 17 miles, passing the Corran Ferry heading for Inversanda, then continue on through this quiet and wild part of Scotland making for Strontian. If you’re familiar with the periodic table, you’ll know the element Strontium (Sr) was discovered here in 1787 and is named after the village.

The route heads north through the village and into Glen Hurich, then west alongside Loch Doilean and on to Polloch, for a wild camp overnight. Please take great care with stoves or naked flames near woodland when wild camping and use the guidance in the SNH Camping in Scotland leaflet. 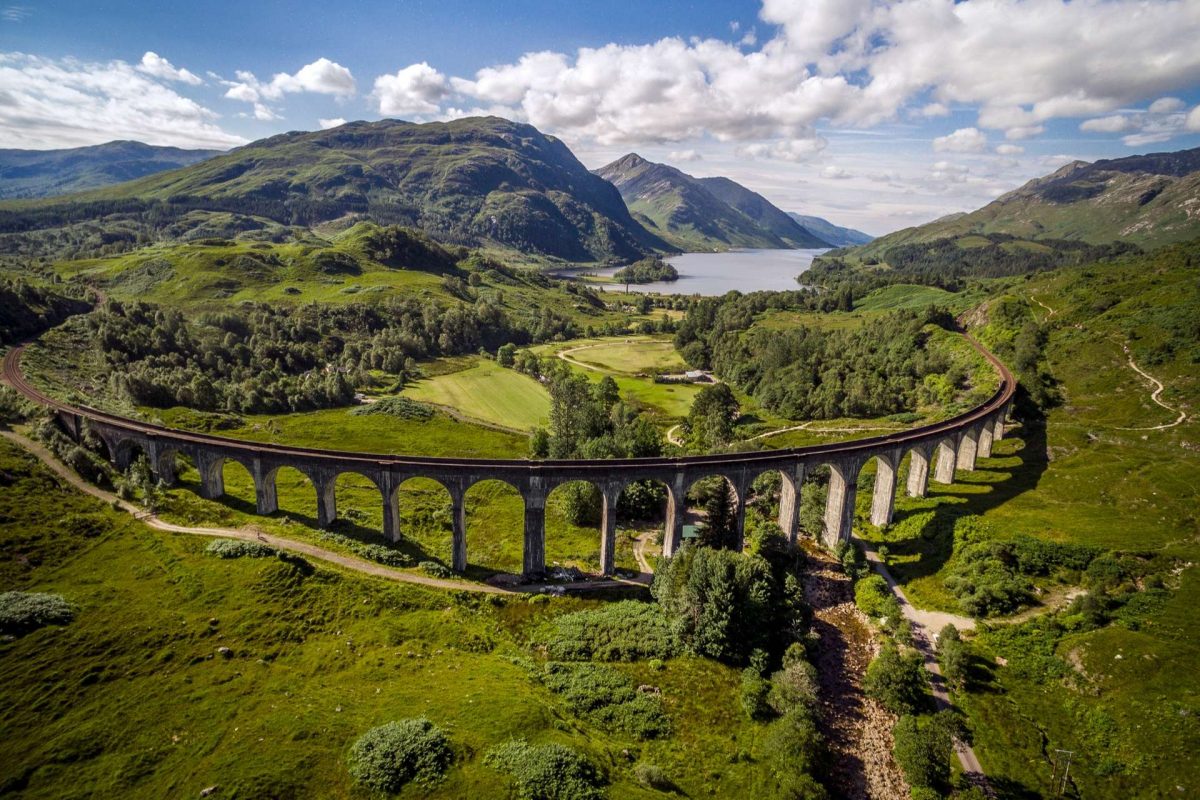 Next morning a 14-mile track follows the shores of magnificent Loch Shiel – well-known as the setting for Hogwarts School in the Harry Potter films – before arriving at Glenfinnan with its imposing monument, visitor centre and the Glenfinnan Viaduct. It’s well worth stopping here to learn about the 1745 Jacobite Rising.

The route then follows the busy A830 east for 4 miles before turning off on to the quieter A861, with the Camasnagaul Ferry 10 miles further on. Return to Fort William via the ferry, or if you want to avoid the A830 section, take a minor road west through Glenfinnan for a mile to arrive at Glenfinnan Station, where you can catch a train back to Fort William.

The Gaick Pass, an historic droving route used by Highlanders to drive their livestock to markets in central Scotland, runs from Kingussie in the Spey Valley to Highland Perthshire further south.

This 35-mile route, starting in Blair Atholl, passes through wild and dramatic country and it’s well worth taking two days to enjoy.

From Blair Atholl railway station, follow Lochs & Glens Route NCN route 7 for 11 miles to Dalnacardoch Lodge. Next, carefully cross the busy A9 where a great track heads through Dalnacardoch Wood up onto open land leading to Sronphadruig Lodge set in the shadow of the Corbetts An Dun and Maol Creag an Loch. The trail narrows along the west shore of Loch an Duin and on to Loch Bhrodainn, so care on the bike is required here. The area around Gaick Lodge and Loch an t-Seilich is a good overnight wild camping spot.

Next day, follow a good track for 13 miles through Glen Tromie and on to Kingussie where you can rejoin the Lochs & Glens route and cycle 13 miles to Dalwhinnie Station or 38 miles back to Blair Atholl. Alternatively take a train south from Kingussie to Blair Atholl and stations further south. 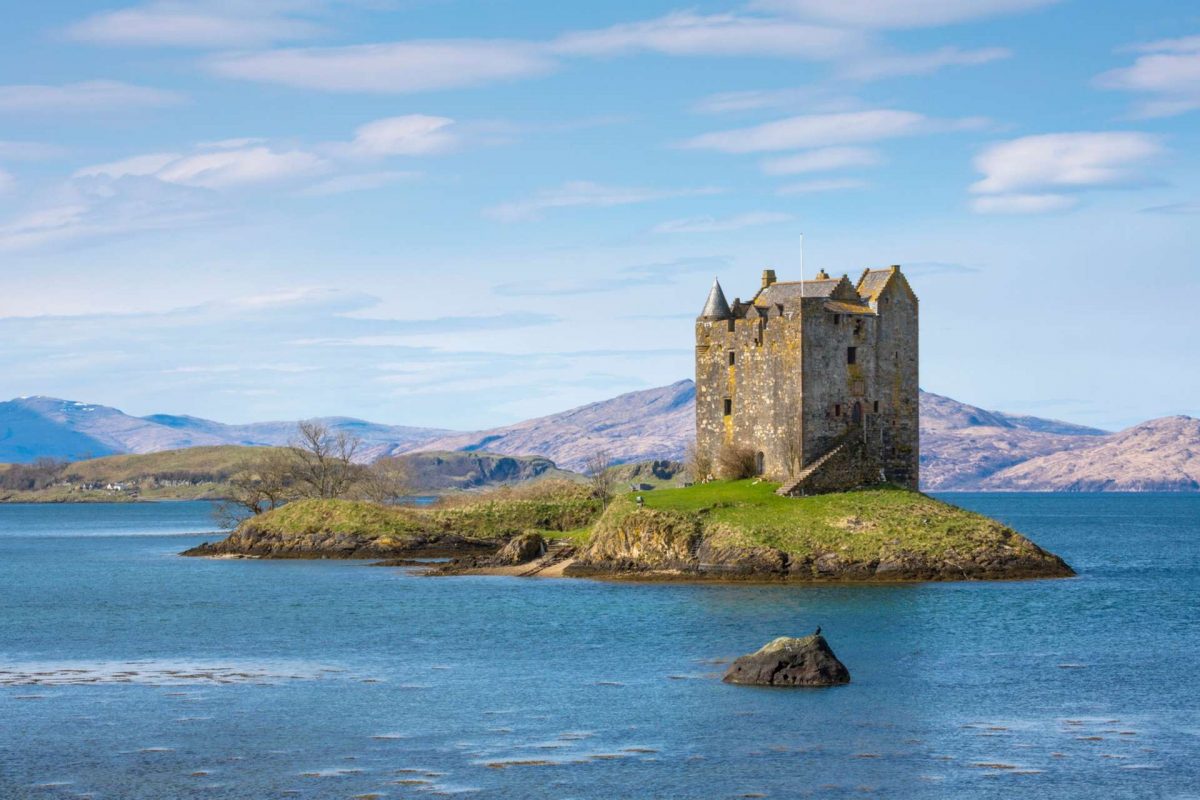 Running 237 miles from Campbeltown to Inverness, and taking in well-known places and landmarks including Oban, Castle Stalker, Fort William and Loch Ness, The Caledonia Way – NCN route 78, is one of Scotland’s finest long distance cycling routes.

Rather than starting in Campbeltown, we’re following the 140-mile Classic Itinerary, encompassing many of the routes highlights.

From Taynuilt Station, follow quiet minor roads down Glen Lonan towards Oban, before turning north on traffic-free paths along the old Ballachulish Railway Line. Never far from the shores of Loch Linnhe, you will enjoy ferry crossings and stunning seascapes, as you cycle past iconic landmarks such as Castle Stalker. At Fort William in the shadow of Ben Nevis, the route heads inland, traversing the Great Glen on a mixture of gravel canal towpaths, forest tracks and quiet minor roads, en-route to the Highland capital of Inverness.

The route is split into five easy legs, but you can reduce or extend these depending on your fitness and how often you want to stop and admire the views! 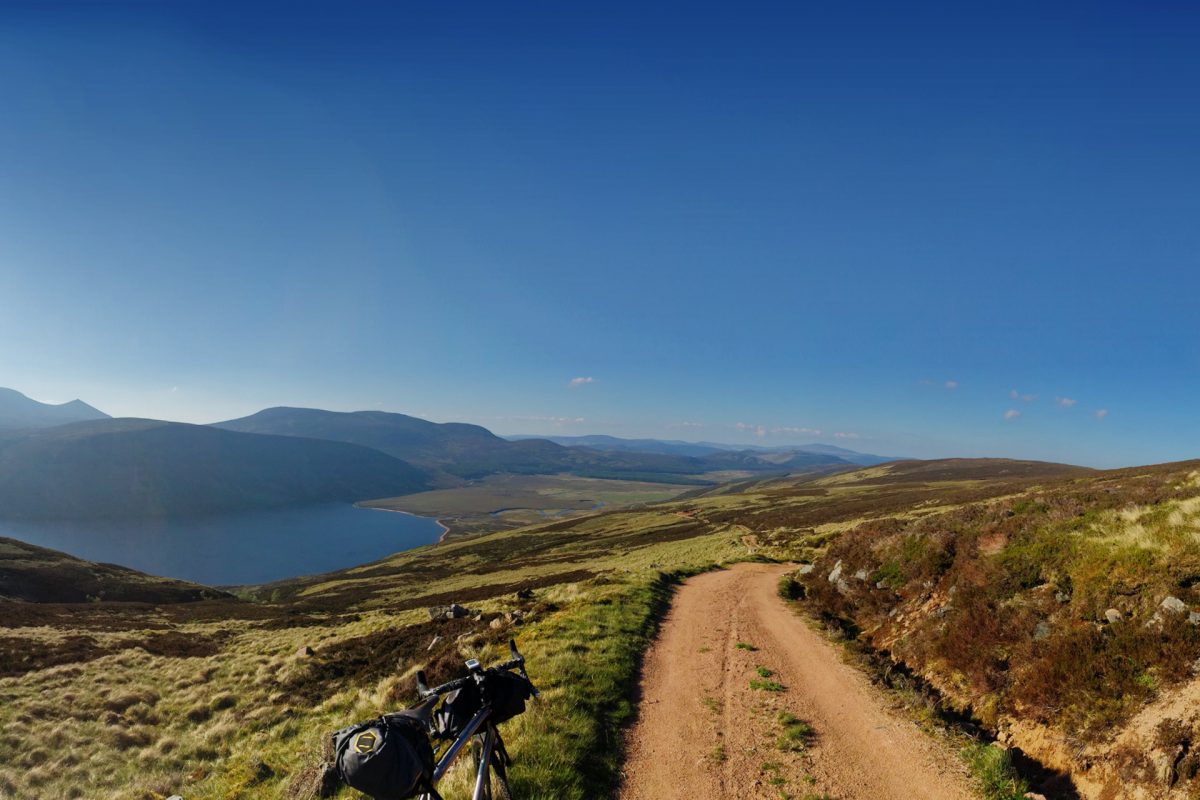 Combining two of Scotland’s heritage paths and crossing a mixture of surfaces and countryside, this 92-mile route makes for an epic day ride, or a highly enjoyable two day adventure with an overnight stay in Ballater.

Starting at recently refurbished Dundee Station, just over the road from the tall ship RRS Discovery and the iconic V&A Museum, head out of the city and north to Kirriemuir on any one of a number of quiet minor roads. Continue north on the B955 into the heart of Glen Clova where you can ‘fuel up’ at the welcoming Glen Clova Hotel, before taking on the most challenging section of this route!

Continue up the glen to the well signed Capel Mounth Path, which will see even the strongest riders pushing their bikes up some of the brutally steep ascent out of Glen Clova. The climb is well worth the effort though, as the views across Loch Muick, the Lochnagar massif and the Cairngorms National Park are breathtaking. An exhilarating technical descent into Glen Muick follows, then carry on to Ballater.

The historic former railway station in Ballater’s Station Square marks the start of the Deeside Way, NCN route 195. Following the traffic-free old railway line for this final 41-mile leg, you will make good time along gravel paths through the heart of Royal Deeside. Never far from the River Dee, the route passes through Aboyne, Banchory and Drumoak, before ending at Duthie Park close to Aberdeen city centre – just a short ride from Aberdeen railway station.

Tweedbank to Innerleithen to Yarrow to Peebles to Tweedbank, Scottish Borders 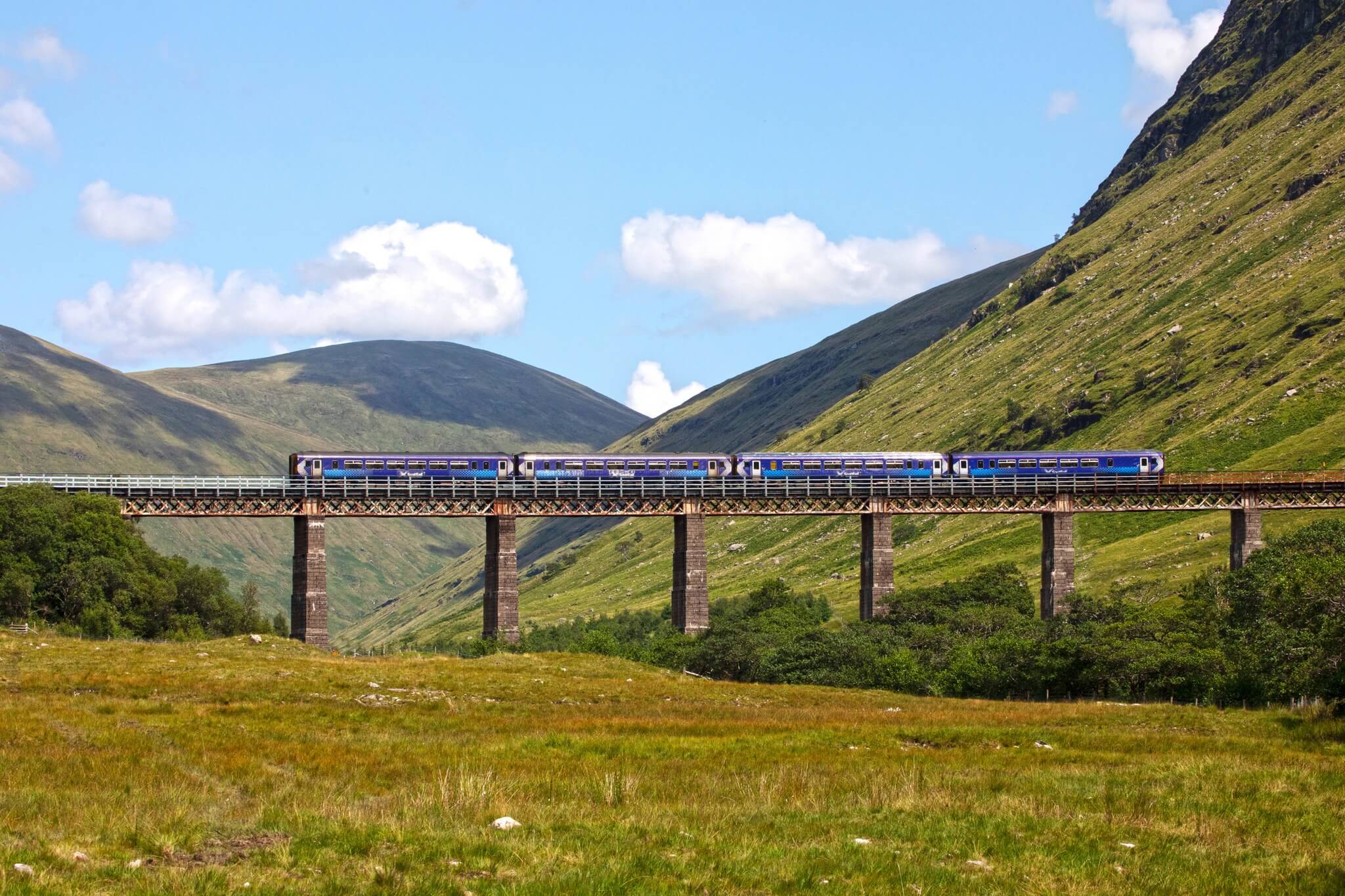 This is an ideal route if you’re in Edinburgh and want to escape to the countryside for a few days. The Borders Railway offers the ideal car-free solution to get to the trail head and back home. This is a demanding 100-mile route, where a good level of fitness is required and there may be sections where you need to carry your bike.

Starting at Tweedbank Station, cycle along Tweedbank Drive to pick up route markers for NCN route 1 and head west for 16 miles to Innerleithen. Take Traquair Road out of the village, then at the 7stanes centre, head uphill to follow the steep cross-country trail over Minch Moor via the Southern Upland Way to eventually arrive at Selkirk.

Before reaching Selkirk, follow the A708 for 3 miles, then take the B7039, signposted Ettrickbridge, to stunning Bowhill House, which is well worth a visit. Then it’s west through a forest, before heading along a moorland track eventually coming out at Kirkhope, near Ettrickbridge. Turn right onto the B7009 and follow this for 13 miles to reach The Gordon Arms on the A708, an ideal spot to rest your head (and weary legs) overnight.

Next day, head west along the A708 for less than a mile, then turn right to follow the Douglas Burn, eventually heading north-west over open moorland aiming to reach Manor Water. The trail then heads east for a steep ascent on forest tracks of Cademuir Hill near Peebles.

Go through the town’s Kittlegairy Estate to pick up the B7062, which passes lovely Kailzie Gardens, before taking a right at Kirkburn and following trails around Wallace’s Hill to reach the B7062 again beside the River Tweed. Turn right here and follow the road back into Innerleithen – it’s well worth visiting historic Traquair House (with its on-site brewery) here, which is just a small diversion off the route. To return to Tweedbank station, simply retrace the 16 miles back along NCN1, described earlier.

There are many bike-packing options across Scotland and if you’re keen to get out there but are not sure where to start, drop the folks at Bikepacking Scotland a line and they’ll set you on the right track!

There’s more information about cycling in Scotland on our website too.