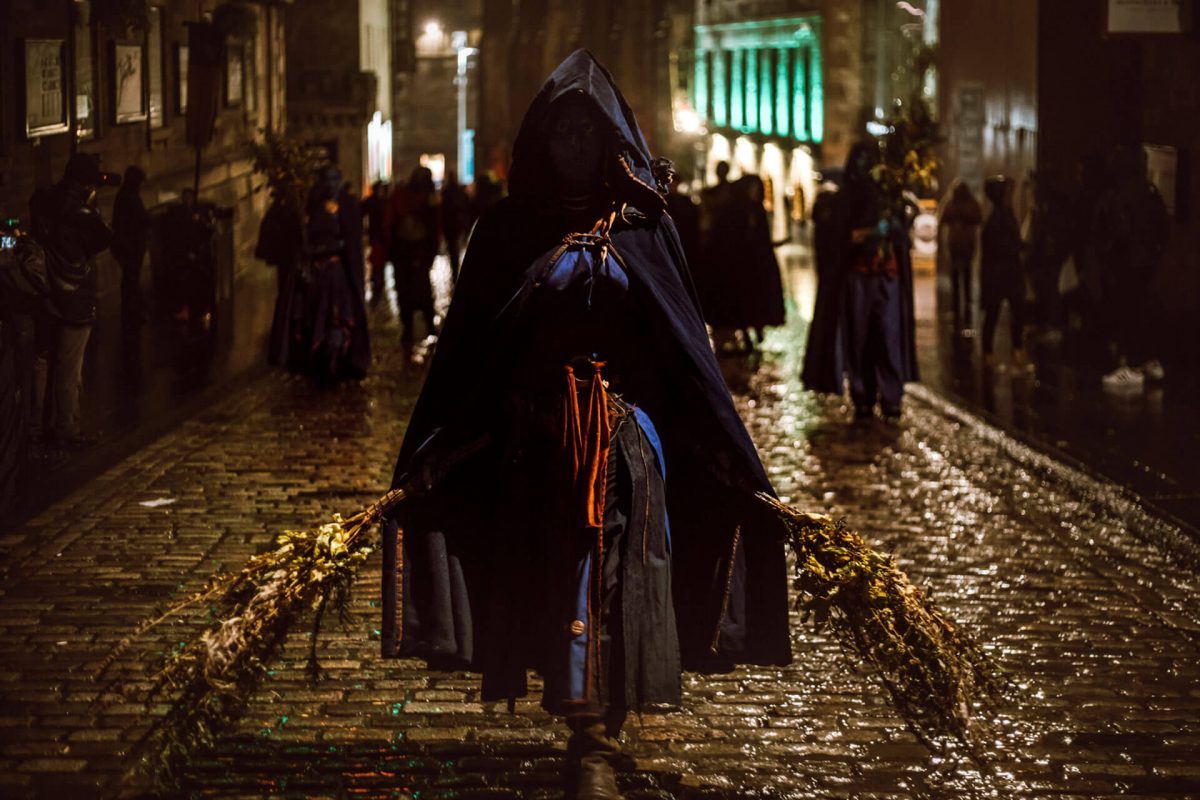 There’s a chill in the air and I don’t just mean the temperatures outside are getting cooler. Halloween is nearly here. We take it very seriously in Scotland, with ancient traditions and superstitions living on. What will you be doing on All Hallows’ Eve? Cowering under the covers?

We hope not, because we’ve come up with some suggestions of the best things to do this Halloween with a range of events to suit everyone; from fun events for all the family to the downright terrifying. Take your pick from haunted houses, ghost walks, scary films, pagan fire festivals and more.

With colourful costumes depicting characters from ancient folklore, fire, musical and street theatre performances, the Samhuinn Fire Festival usually unfolds on top of Edinburgh’s Calton Hill and is a feast for the senses. The Celtic festival, run by the Beltane Fire Society, harks back to the traditions of Samhuinn (Gaelic for Samhain) – the pagan celebration of the end of the harvest season and arrival of winter.

This year, the society invites you to gather around the virtual Hearth Fire – Digital Samhuinn Fire Festival for and evening of arcane ritual, performance and song. This is a ticketed event which we be broadcast live on Facebook Live, IGTV and YouTube.

Mercat Tours have a variety of chilling ghost tours for the spookiest time of the year. Make a creepy descent to Edinburgh’s most haunted vaults on the Halloween Underground tour, or walk through Edinburgh’s Old Town after dark while hearing harrowing tales of the vagabonds, witches and other dastardly figures who met their fate at Edinburgh’s Gallows on the Hangman’s Haunts tour. Or maybe you’re brave enough for a night-time visit to the graveyard on the Doomed, Dead and Buried offering?

For (brave) adults only, the tours takes you on a spine-tingling journey through the most macabre chapters of Edinburgh’s past, to spots where horrific misdeeds were committed and ghostly presences abound. In short, dare to be scared!

Are you ready do descent into Edinburgh’s dark past on one of The Real Mary King’s Close’s Lantern-Led Tours? Discover The Close’s former residents in a complete darkness – the only light source the flicker of your lantern. And meet an insidious character which used to strike terror into people’s hearts at their very sight. The tour runs ever 15 minutes between 6 pm and 8 pm, and lasts about one hour.

Enjoy a Spirited Evening before heading off on the Lantern-Led Tour.  The Real Mary King’s Close has partnered up with The Scotch Whisky Experience to treat you to a 3-course seasonal dinner at the Amber Restaurant. You can start the dinner at either 6 pm or 6:30 pm, and lasts about three hours in total. The Lantern-Led Tour is included in the dinner’s ticket price.

Have a spooky time at Castle Kennedy in Dumfries & Galloway where the whole family can get involved in exploring the colourful, autumnal gardens in search of hidden pumpkins. Once you’ve followed the Halloween Pumpkin Trail, warm up with a tasty hot chocolate and treat at the welcoming tearoom.

Happy St Andrews Day 🏴󠁧󠁢󠁳󠁣󠁴󠁿🏴󠁧󠁢󠁳󠁣󠁴󠁿🏴󠁧󠁢󠁳󠁣󠁴󠁿 So I have to share a photo of St Andrews 😉 St Andrews Cathedral The cathedral was begun in 1160–2 by Bishop Arnold. Work continued over the next 150 years, but was stalled by a storm in 1272, which blew down the west front, and by the first War of Independence against England. When the cathedral was finally dedicated in 1318 – in the presence of Robert the Bruce, by then king – it was by far the largest church in Scotland. So it was fitting that St Rule’s became the headquarters of the Scottish Church. In 1559, John Knox preached a fiery sermon in St Andrews parish church, and the cathedral was ‘cleansed’ as a result. In 1561, it was abandoned and replaced by the parish church as the chief place of worship. St Rule’s was then left to fall into ruins. #standrewscathedral #standrews #fiftyshades_of_history #historicscotland #explorescotland #lovescotland #monumental_world #visitscotland #loves_scotland #scotland #scotlandlover #scotland_greatshots #icu_scotland #ig_scotland #igscotland #insta_scotland #instascotland #vd_gothika #traveling_uk #traveling_scotland #thisisscotland #scotlandexplore #wonderlustscotland #hiddenscotland #kings_gothic #unlimitedscotland #earthpix #tlpicks #happystandrewsday

Wandering the streets and lanes of historic St Andrews, you can get a real sense of the past taking you by the hand. Just pray it’s not something else taking you by the hand when you take a night-time walking tour! Starting in Church Square, behind Holy Trinity Church, you can explore the dark streets with St Andrews Ghost Tours. Hear tales of folklore, ghosts and witches based on the local bestselling book Ghosts of St Andrews by Richard Falconer.

Tots and kids of all ages will love the Halloween Fun Day at Traquair with ghost stories in the woods, a chocolate ghost hunt in the Traquair Maze and more. There’s even the chance to get your hands on some creepy crawlies – if you are brave enough! Those donning Halloween costumes could be in with the chance of winning a prize.

The woodlands of Kelburn will be transformed into world of ghosts and ghouls at the Halloween Freaky Forest. Taking place during the day, the atmosphere is very family-friendly – but be prepared for a few chills and thrills!

Now in its 5th year, get your freak on this October at Galoshans Festival! See Inverclyde take centre-stage as it welcomes a whole array of spooktacular events from visual art exhibitions and dazzling street performances to creative workshops. This year the festival will mark the 250th anniversary of James Watt’s death and will be themed around innovation and light. Don’t miss out on the chance to go to the Galoshans Parade & Street Party, and remember to look the part by dressing up and getting ready to make everyone jump out of their skin!

Take a gruesome ghost train-style ride this Halloween at the Edinburgh Dungeon and watch with glee as creepy tableaux are brought to life with special effects and costumed actors embodying characters from Scotland’s most horrifying events and creepiest legends.

This year sees the return of Séance…Is Anybody There? where guests are invited to commune with the victims of Burke and Hare and other infamous murderers from Scotland’s past.

Filled with plenty of jumps, scares and other gory surprises which will have your shrieking, the Edinburgh Dungeon offers a silly, theatrical romp this Halloween season.

Pre-booking is essential for all guests. Children under 15 years must be accompanied by an adult; not suitable for children under eight.

Head along to Blair Castle in Pitlochry this October for a spooky experience in The Witches’ Garden. Children can enjoy a quiz set in our 9 acre walled garden and scavengers hunt in Diana’s Grove, with a small prize at the end!

Do you want to hear more about Scotland’s gruesome ghost stories, or delve deeper into the land’s myths and legends? Check out our Scottish Ghosts, Myths & Legends eBook now! 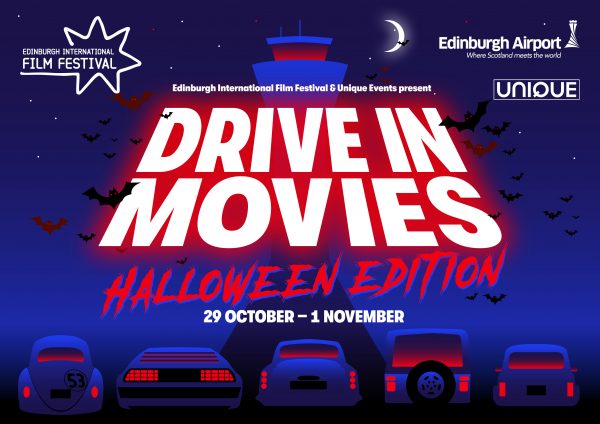 With Halloween just around the corner, Edinburgh International Festival and Unique Events proudly presents a special Halloween programme for their Drive In Movie series at Edinburgh Airport.

For one week only, get ready for a spook-tacular line up of horror, thrillers and delights while enjoying cult classics such as Ghostbusters, Scream and Jaws. The fun doesn’t stop there though, you will also be in the chance of winning prizes for the best Halloween costume, take part in a huge interactive quiz, along with a big sing-a-long car disco! With tickets already sold out for the Saturday screening of Halloween, make sure to book soon to avoid disappointment.

Feeling peckish? The on-site food trucks will be on hand offering delicious snacks to keep you fuelled throughout the movie marathon, just make sure not to drop your popcorn!

Of course, this is just a selection of the ghastly goings-on and events you can enjoy this Halloween across Scotland. For other ways you can scare yourself silly this year take a look at what other Halloween events are on (if you dare!). Find out more about Halloween or why not visit a haunted site or two for a truly spooky experience?

October is a wonderful month to visit, but there’s plenty to see and do throughout the year too. Find out when to visit Scotland and start making plans!

9 stunning gardens to explore during the Scottish Summer Garden Festival

Scottish Tree Festival 2020: See the wood and the trees this autumn!