This was one of the most anticipated parts of our trip – the Isle of Staffa! We got an early start and marched down to Fionnphort Ferry Terminal for a Staffa Trips outing to the island.

For three generations, the Kirkpatrick family have taken visitors to Staffa and we had a wonderful time chatting with Captain Davy and his awesome crew. Over the years, he’s shared this special place – and his knowledge of it – with tens of thousands of people. Whether you’re interested in geology or seabirds, or just fancy being out on the water for a few hours, you’ll have a tremendous time.

The island has been uninhabited since the 1800’s. There used to be red deer and goats on it, but in 1997 all livestock was removed. This has led to a regeneration of the island’s vegetation and the return of puffins. As you’ll see, they are adorable clown-like birds that have almost no fear of humans and will approach within a meter or two. The geology is incredible (especially around Fingal’s Cave), and the dramatic marriage of ocean and stone is something you’ll never forget. If you are on Mull, a trip to Staffa is a MUST! 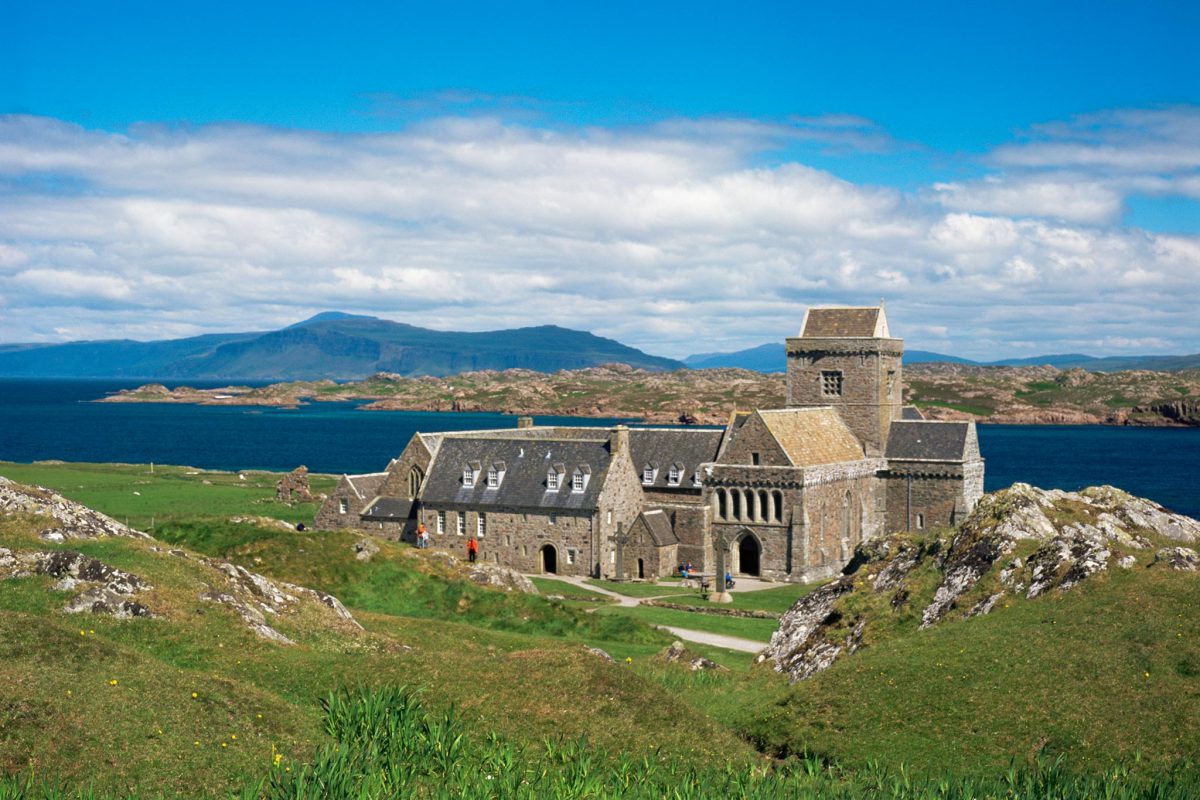 On the ride back, the boat stops at the Isle of Iona (population of around 120 permanent residents) and we did just that. Hungry for some lunch, we found a lovely little place called the Argyll Hotel for a quick bite to eat. Then it was a relaxing 10 minute walk to Iona Abbey & Nunnery, which is run by Historic Environment Scotland, an organization that manages and maintains many of Scotland’s historic sites. In 563 AD, Columba came to Iona from Ireland with twelve companions and founded a monastery. It developed as an influential centre for the spread of Christianity among the Picts and Scots. It’s a wonderful and quick place to explore for about an hour. Getting back to Fionnphort was a simple and quick 10-minute CalMac ferry ride for about £4 each. 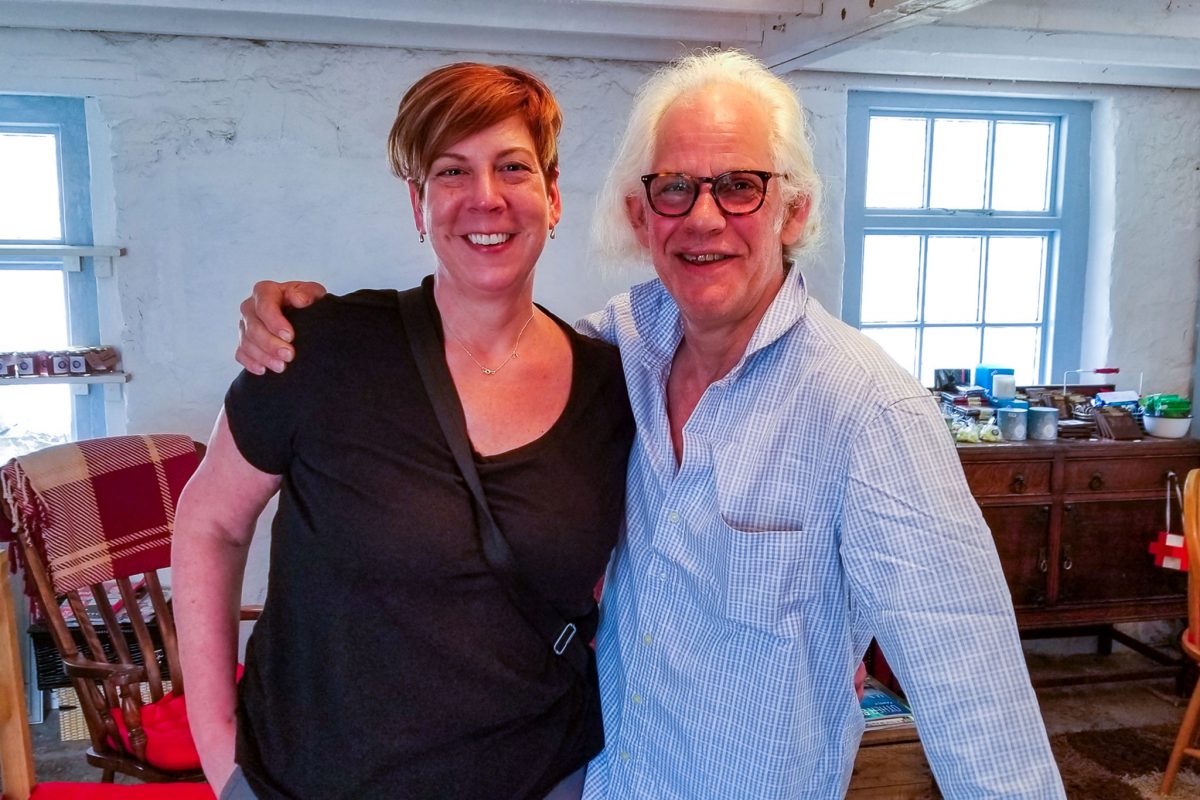 After checking out from Caol Ithe, we headed east on the A849, counter-clockwise around Loch Scridain to the impeccable Tiroran House Hotel, owned by Laurence Mackay, who is one of the most interesting people we met on this trip. He’s super affable and had lots of great stories to tell.

Besides running the hotel, Laurence also owns Whitetail Gin, a craft gin produced using sustainably-sourced botanicals, such as juniper, coriander and lemon peel, but the real secrets lie in the botanicals they forage for locally. We had a wee tasting before dinner and it’s delicious.

ISLE OF MULL WALK-ABOUT, THEN CRAIGNURE 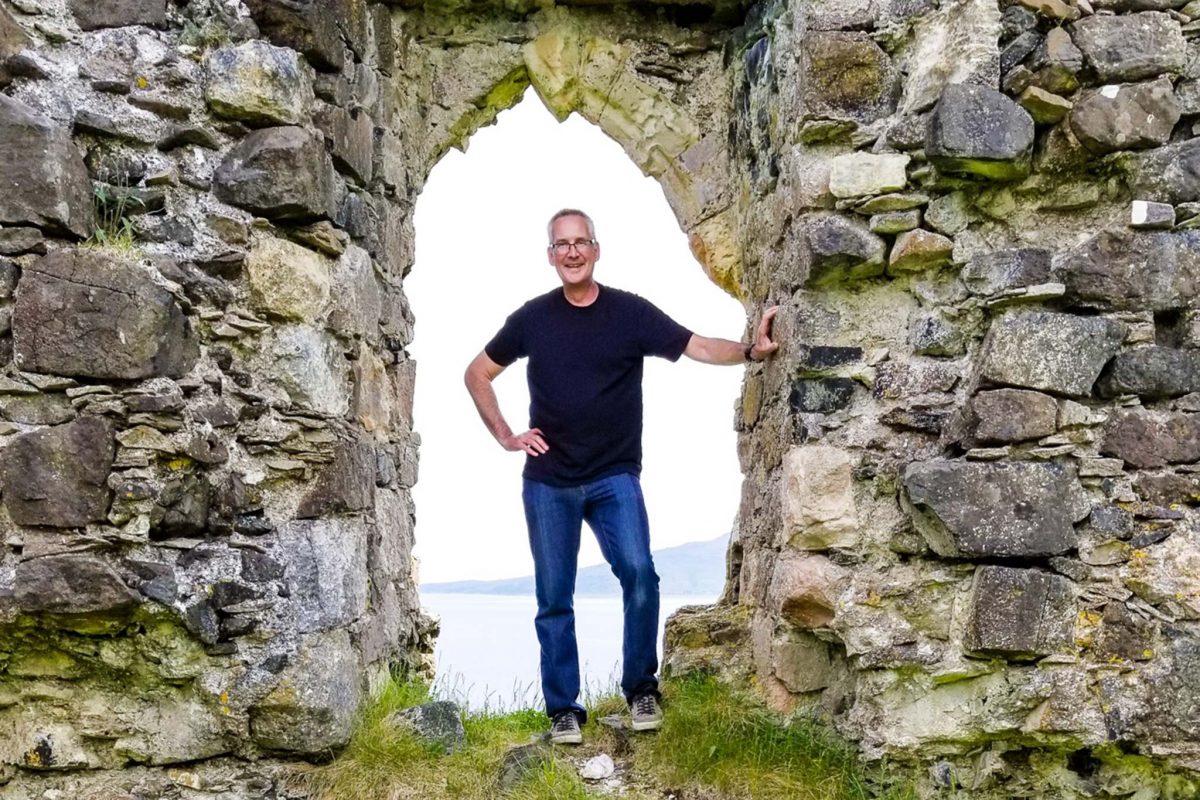 Our original plan was to simply chill at Tiroran House, and sit around in our pyjamas until our 5pm ferry to Oban. A vote was taken and we decided to circumnavigate the center of the island instead, though regrettably not as far north as Tobermory. We bought a little picnic lunch from Laurence and hit the road.

We skirted clockwise north to Balnahard, then east along lovely Loch na Keal to Dhiseig, before arriving at Aros Castle, near Salen – another ruin like Auchindoun, but even smaller. Although the majority of roads on the island are single lane with passing places, once you’re off the A849, the traffic drops to zero, so it’s a lovely drive.

Aras (there’s some dispute about whether it’s spelled ‘Aras’ or ‘Aros’) Castle dating from the 13th century and built by Clan MacDougal, is also known as Dounarwyse Castle and was built as a stronghold of the Clan MacDougal (Lords of Lorn) but passed to the powerful MacDonald Lord of the Isles in the 1400s. 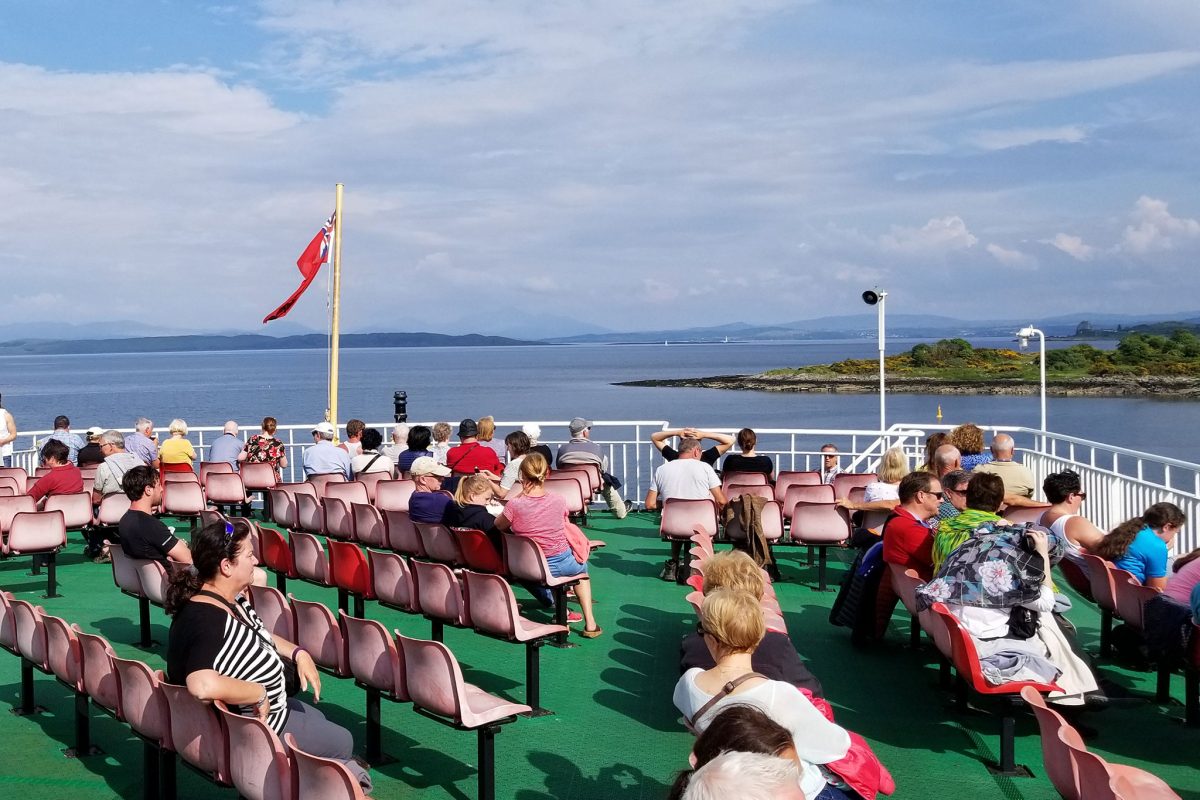 Our ferry from Craignure to Oban was the ‘super boat’. Not only does it hold 100+ vehicles, but easily 500+ passengers. It has a full restaurant, slot machines, a bar and a food court. We were amazed by this ferry, there’s no equivalent in the US. It was super deluxe, thank you CalMac Ferries. Sitting up on top (we had bonnie weather – our ninth day in a row!) was spectacular. Cool breezes and wonderful views. 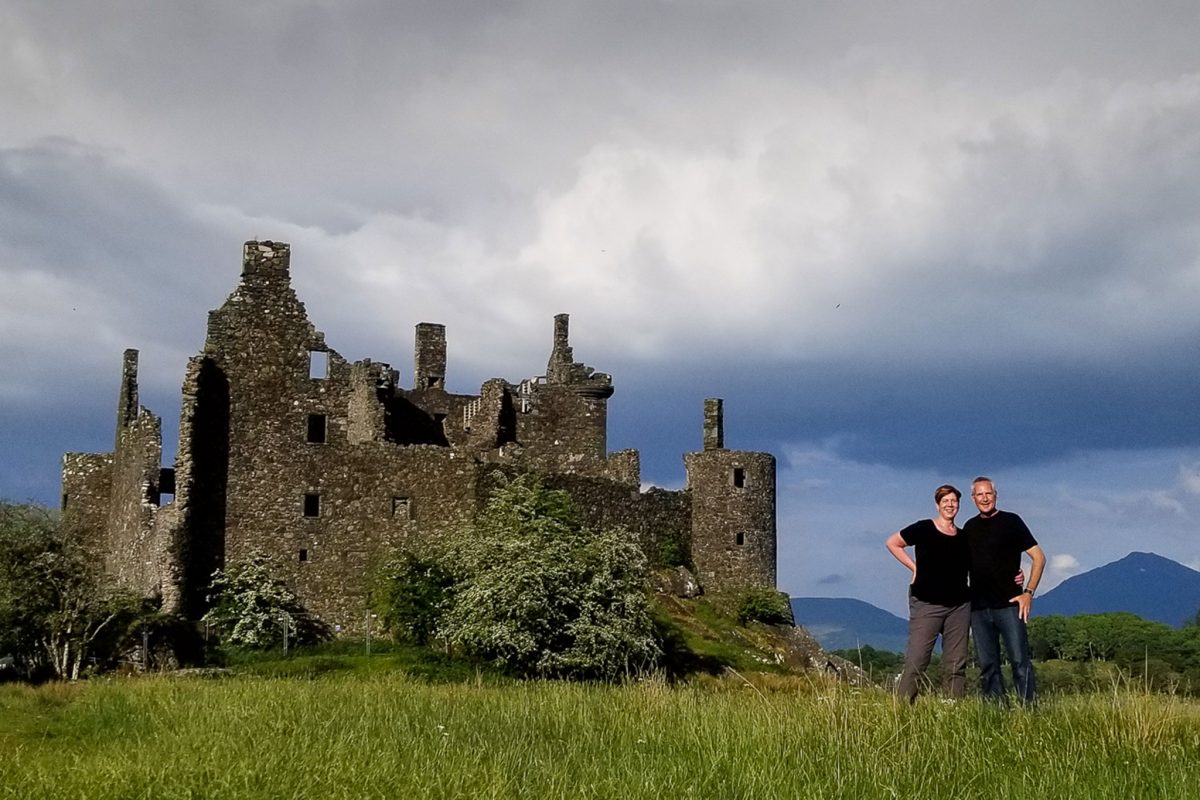 After disembarking in Oban around 6.30pm (the sun was still up), we pressed ahead on our 1.5 hour drive to the Lodge on Loch Lomond. But, we HAD to detour to see Kilchurn Castle at the head of Loch Awe (our third ruined castle, since we dig that). We got there pretty late and much like Auchindoun and Aros/Aras castles had the entire place to ourselves. The march from the parking lot to the castle is about a mile and a short, pleasant hike and the setting is spectacular. 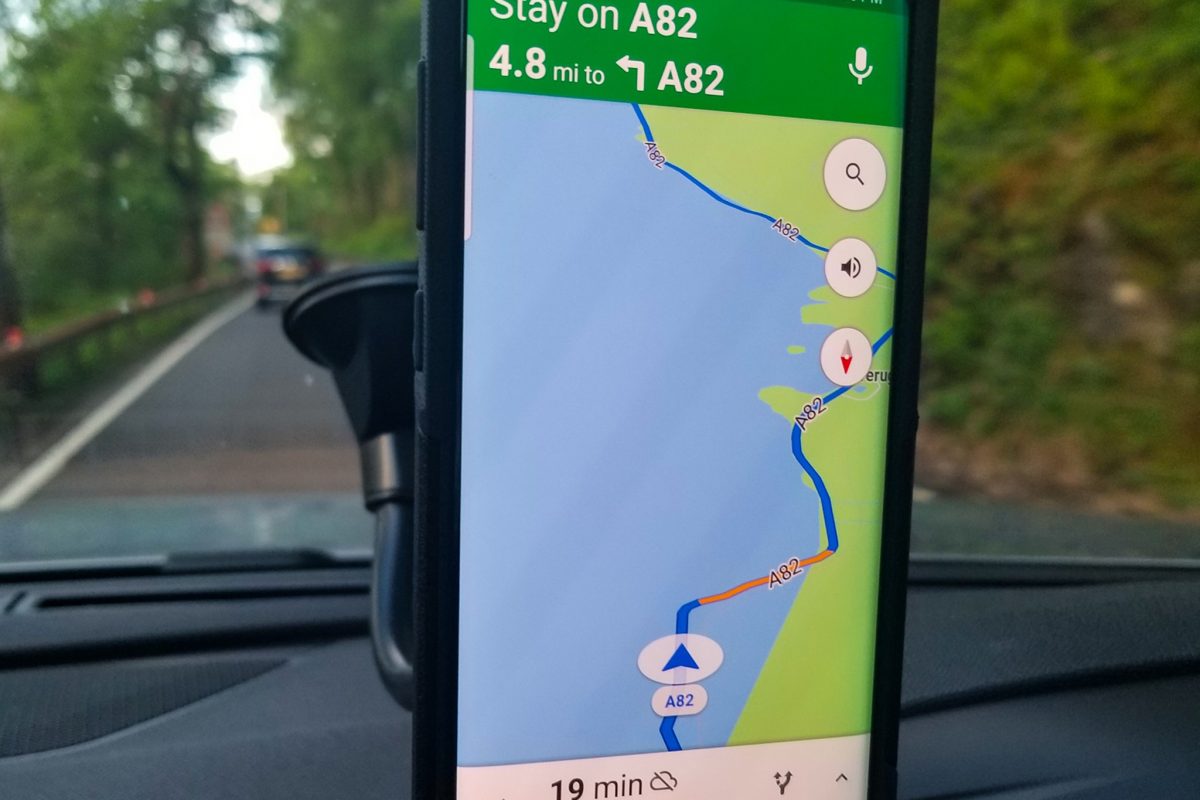 The drive down Loch Lomond, didn’t seem quite as daunting as it did in 2016. The lines down the middle (and sides) of the roads have been re-painted, and there was little or no truck traffic. Still, it’s ‘pay attention’ driving for sure. It’s funny to watch Google Maps have a fit with Scottish lochs and roads, as the live map often shows you driving on water! 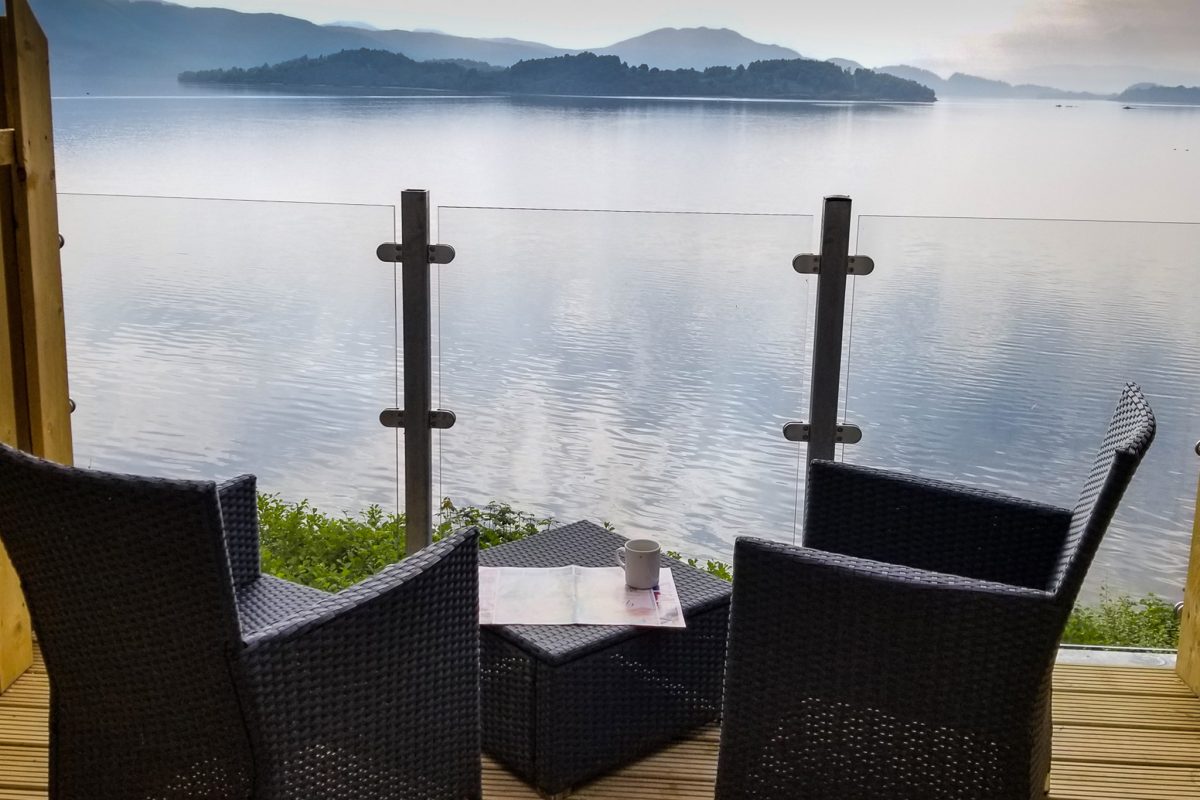 We are almost at the end of our travels and the Lodge on Loch Lomond was the perfect way to end the day. They have a lovely restaurant and fantastic lake (loch) front setting, with a wide variety of water activities. Many of the rooms (in the main building) have newly refurbished patios.

Off we went to Glasgow, though we wanted to get to the hotel (we stayed at the lovely Hotel Indigo) to off-load our luggage, we had to be at the Clydeside Distillery for an 11am walkabout. This was one of our favorite tours in a BRAND NEW state-of-the-art whisky distillery. Their gift shop is truly the Valhalla of whiskies and yes I walked away with two 20cl bottles (not available in the US) and a giant smile on my face. Thanks to Ross and Bridgeen and the great staff there. If you visit Glasgow, don’t miss this!

Thanks to The National Trust for Scotland we had a wonderful tour with Ana Sanchez to explore the Tenement House – a faithfully restored four-room house lived in by Miss Agnes Toward for over half a century. You can step right into this living museum, which provides a rare glimpse into life in Glasgow in the early 20th century. You’ll not find anything as fascinating as this anywhere, so when you visit Glasgow, add this to your ‘must see’ list! Thanks Ana, you were so gracious, funny, and informative.

GLASGOW – THE LAST SPOTS OF FUN 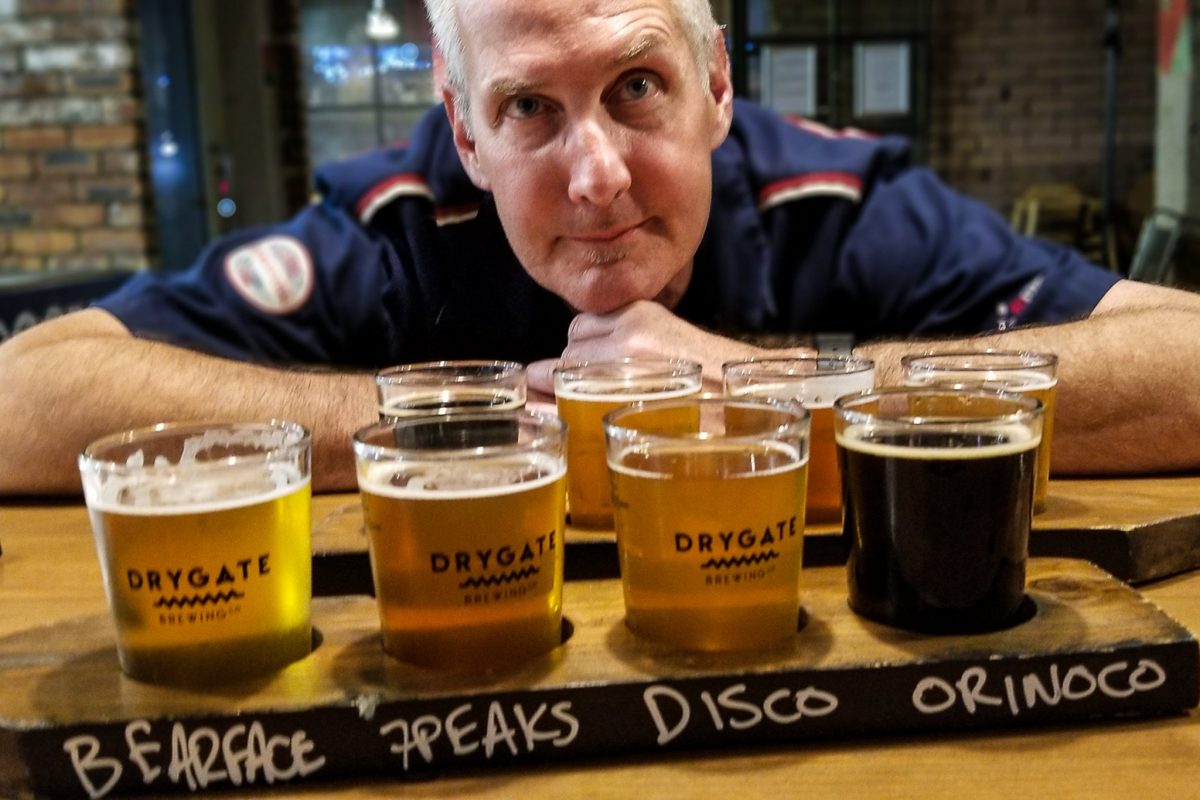 This is where the sadness starts to roll in, because we’ll be on the ‘sad plane’ tomorrow, so our last gasp was a visit to the Drygate Brewery. The only micro-brewery operating in the historic heart of Glasgow, Drygate has been brewing for the past four years, mashing in for the first time in 2014. Thanks Ross for the great tour! Above is the yummy beer flight Rochelle and I had with dinner! 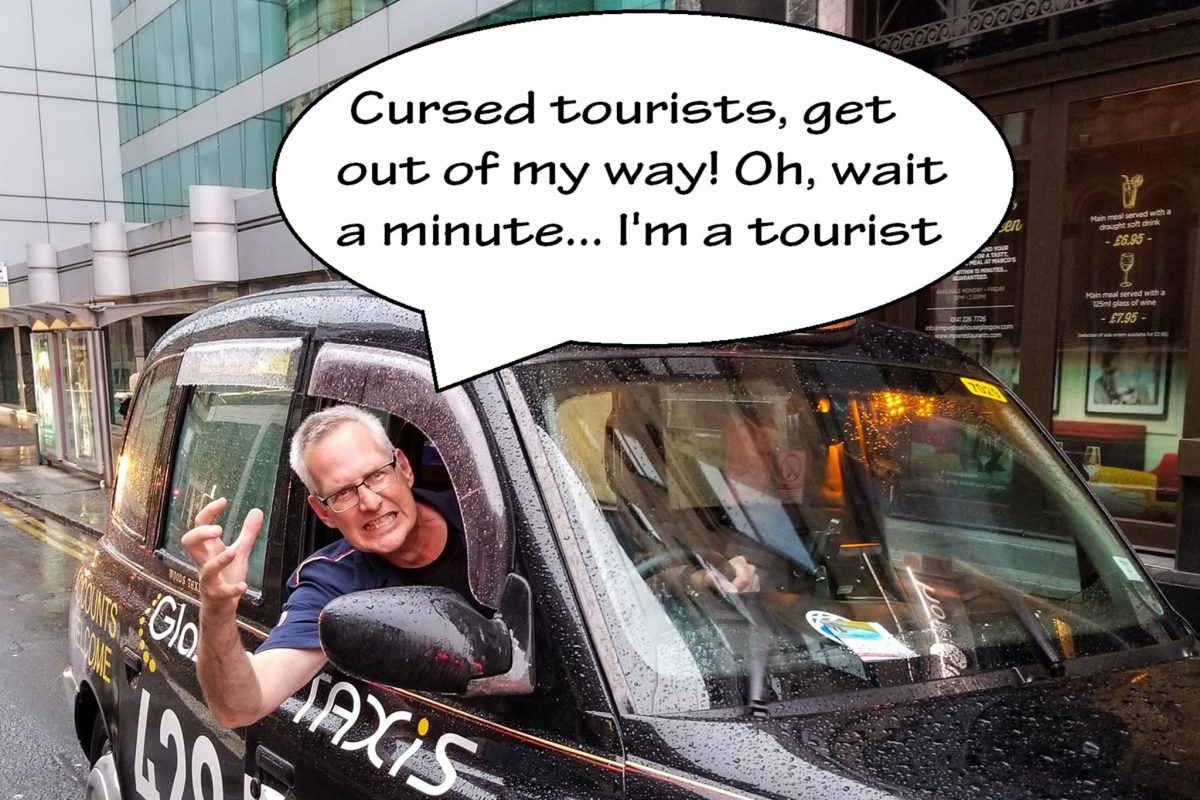 Christian gets a taste of the ‘hot seat’, Glasgow © Rochelle DeBaun

Glaswegians are the best! On a busy/concert rainy Saturday night, we were lucky to hail the most spirited taxi driver. Our shared stories and wild tales ensued on our short ride. As we approached our hotel, he said “Hop out and sit in the driver’s seat!”

THE END – WHAT IS YOUR FAVORITE THING ABOUT SCOTLAND?

I’ve been to several continents and many countries and each have their own culture and flavor. Overall, people worldwide tend to be reserved, but I found quite the opposite in Scotland. I was astonished in several places to be approached by people on the street who overheard me talking and just wanted to add a comment to what I had just said. Many, many times I was approached by complete strangers who wanted a good chat, or to simply share what they do, what they like and what life is like in Scotland. If you slow down and take time to talk with Scots, they will give you the honest truth and with great pride and wit. Visit, you will not be disappointed.

Read Part 1 and 2 of our Scottish adventure, as well as a my observations about the wonderful Scots.

Find more more Scottish holiday and breaks inspiration – discover island hopping, everything you need to know about driving routes, and the city of Glasgow.

Islay, A Spirit of its Own – A Whisky Lover’s Journey