Environmental sustainability is now a top priority for hotels across Scotland, but there’s a lot more to going green than simply recycling and asking guests to re-use their towels.

Here are just some of Scotland’s wonderful eco-friendly hotels and what they’re doing to ensure a sustainable stay for their guests.

Soothe your mind and soul at the 18th century  Trigony House & Hotel Spa tucked away in Dumfries & Galloway. Among the many steps taken by the house to reduce its carbon footprint is a carbon neutral heating system and a commitment to using only the finest local or homegrown produce. Savour tantalising dishes created from ingredients from local supplies as well as fruit, vegetables and herbs grown in the garden and orchard. Rejuvenate with treatments using ishga, an organic skincare brand made from Hebridean seaweed from the Isle of Harris and make use of the house’s personal electric car charging station, available free of charge.

Philipburn Country House Hotel in Selkirk dates from 1751 and takes as much pride in its green credentials as it does its heritage. Power-saving sensor lighting features throughout the interior while the kitchen rustles up delicious dishes using local food and drink produce. Outdoors, rainwater is harvested and food waste is turned into compost to nourish the extensive gardens. There’s even an EV (electric vehicle) charging point located in the grounds.

Eden Locke is an incredibly chic aparthotel in Edinburgh which offers a luxurious home away from home during your stay in Scotland’s capital. It’s also an active member of the Green Tourism Programme which means the owners and staff are constantly striving to ensure your stay is as sustainable as it can be. This year guests will be able to enjoy the hotel’s very own honey at breakfast or in freshly prepared dishes, harvested from four beehives installed on the roof of the Georgian townhouse.

The Radisson Blu Hotel in Glasgow shows sustainable accommodation needn’t come with a hefty price tag. In addition to reducing waste and improving recycling by making more mindful choices when sourcing food and products, the budget-friendly Radisson Blu in Glasgow’s city centre also helps its staff give back to the local community, allowing them to partake in all kinds of volunteering activities throughout the month of June.

The luxury boutique Rufflets hotel in St Andrews was the first-ever carbon neutral hotel in Scotland and remains as eco-friendly as ever. Set around a white-washed building from the 1920s, both the original building and its modern facilities are powered, heated and insulated using green technology. Furthermore, almost all the produce used in the kitchen to prepare the dishes in the Seasons Restaurant is sourced from the hotel’s garden which provides a rich habitat for local birds and wildlife.

Apex City Quay Hotel & Spa in Dundee is home to Scotland’s first-ever eco spa, Yu Spa, and keeps its carbon emissions as low as its stylish eastern inspired décor. From organic products to the water filtration systems, every single aspect of the spa has been designed with sustainability in mind. Choose from over 50 treatments and enjoy the soothing ambience aided by LED lighting. Afterwards, take a relaxing dip in the pool or Japanese hot tubs kept spotlessly hygienic by natural purifying substances and clever ultraviolet technology. 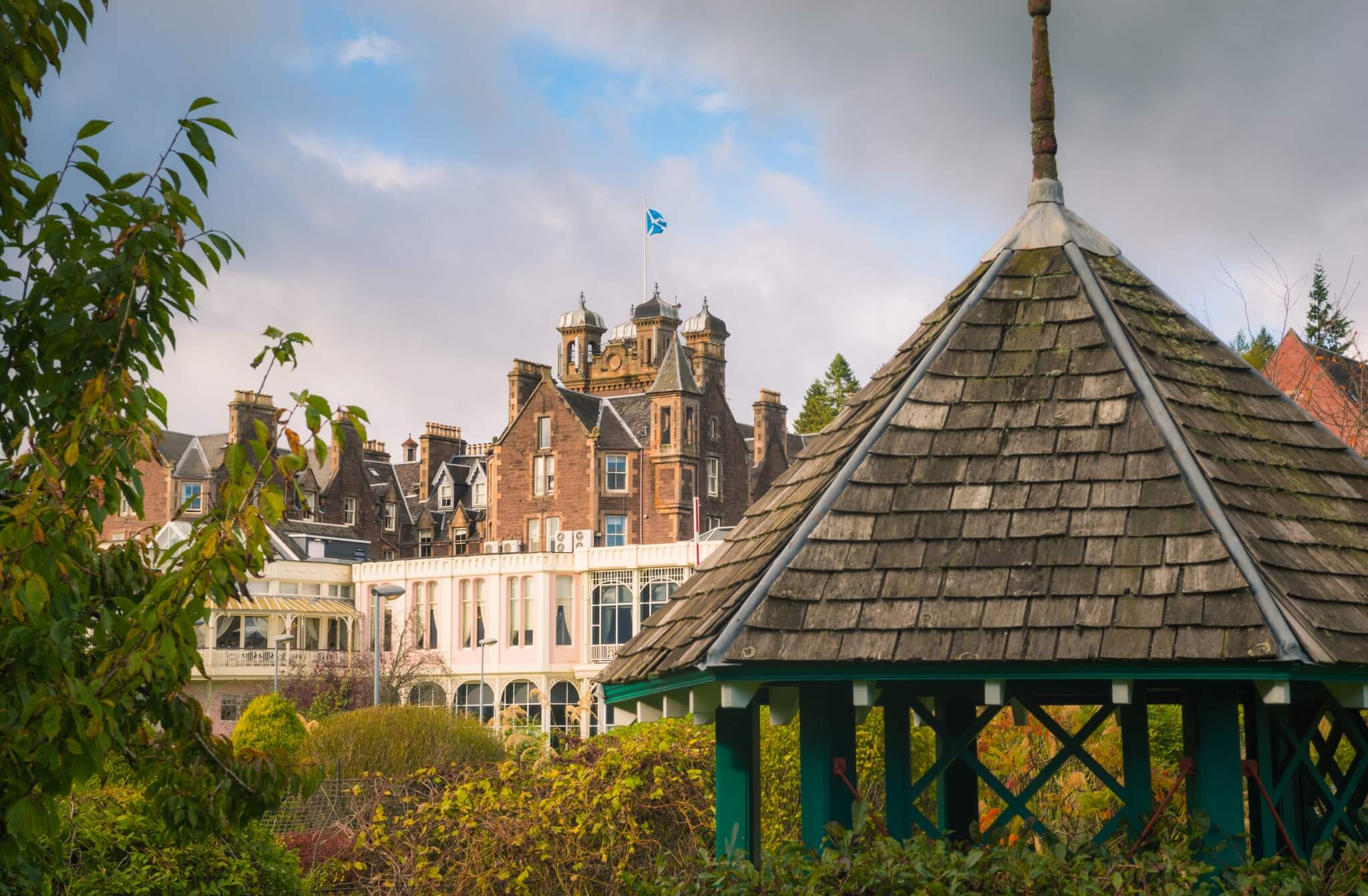 The family-friendly Crieff Hydro Hotel in the Perthshire countryside is passionate about conserving their environment. The recipient of a Gold Green Tourism Award, the hotel boasts an extensive recycling and repurposing programme. With a strict no-waste policy, everything consumed and owned by the hotel is given a second life before ending up as landfill. Unwanted furniture is upcycled while duvets are refurbished and donated to homeless and pet shelters. Even the bar soap provided in bathrooms with solar-powered showers is collected after use before being sterilised, recycled and sent to impoverished communities around the world.

Overlooking the banks of the River Dee, the  ancient Scottish mansion of Maryculter House can trace its history all the way back to the 13th century and was once home to a community of the Knights Templar. Fortunately, the hotel’s sustainable ethos is anything but medieval! Not only is the enchanting period interior warmed by a high-tech biomass system powered by timber pellets from renewable forests, it also boasts charging points for electric vehicles including two Tesla and one generic vehicle 7kw stations.

The small Outer Hebridean Argyll Hotel with its breath-taking views of the Sound of Iona takes a simple approach when it comes to sustainability. Bed linen and towels are washed using biodegradable products and dried outdoors on the line where possible, while ingredients used in the kitchen are sourced directly from neighbouring crofters and fishermen, as well as an organic garden cultivated from composted vegetables and seaweed from the beach. In summer this wild-growing patch of greenery supports a precious eco-system of its own, providing a haven for bees, lizards, sea birds and amphibians.

A post shared by The Lovat Loch Ness (@thelovatlochness)

The Lovatt Loch Ness is a modern roadside hotel set on the southern tip of Loch Ness. It’s a popular pitstop for road trippers thanks to the sparkling reputation of its award-winning restaurant, Station Road, which specialises in seasonal mouth-watering Highland fare. It also offers outstanding sustainable accommodation. The comfortable rooms heated by a cutting-edge biomass woodchip boiler, the first of its kind installed in the Highlands. What’s more, only products which are free from palm oil, a major cause of deforestation worldwide, are used including detergents and toiletries. The Lovatt is also helping to combat habitat loss closer to home by donating a portion of each hotel stay to Trees for Life, a charity committed to restoring Highland forests and woodlands.