Scotland is home to eight beautiful, bright and vibrant cities, each of which boasts their own unique character and many secrets and gems to explore. Whether you fancy stepping back in time and learning all about Scotland’s fascinating past, uncovering our special and elusive wildlife, or even delving into our glistening lochs and rivers, there will be something for you in Scotland.

Keep reading to find out a variety of interesting and unique things about Scotland’s cities that you probably didn’t know.

Scotland is home to not one, not two, but three UNESCO recognised cities; Edinburgh is a City of Literature, Glasgow is a City of Music, and Dundee is a City of Design. Head along to these cities and you’ll be sure to see why!

Edinburgh is home to the Scottish Storytelling Centre, is the said birthplace of the Harry Potter novels by JK Rowling, and is home to world-famous writers, poets and playwrights, including Arthur Conan Doyle and Walter Scott.

Glasgow boasts a legendary music scene that encompasses everything from contemporary and classical, to Celtic, country and more. Alongside its music, Glasgow’s venues are equally eclectic and varied and normally host an average of 130 music events each week, more than any other Scottish city.

You can’t roam far in Dundee without coming across a spectacular piece of art or design. Aside from creative design, Dundee has contributed to the world with inventions and discoveries of everyday products, like the adhesive postage stamp and aspirin, to the creation of cultural icons in comics and video games, as well as innovations in textile and print.

We’re not joking! Of course, we all know that the magnificent city of Edinburgh is Scotland’s capital, but let’s delve back in time.

Elsewhere, Inverness is known as the Capital of the Highlands and is a popular city for visitors to explore whilst they are touring the spectacular Highlands and northern corners of Scotland.

3. The World’s Oldest Football was found in Stirling Castle

Head to Stirling where the popular Stirling Castle is home to some interesting points in Scottish history. The world’s oldest football was found in Mary Queen of Scots’ chamber during renovations at Stirling Castle in 1981. The football was made from a pig’s bladder, covered in cow leather with large, visible stitching and was smaller than modern footballs.

Another interesting fact about Stirling Castle is that it was once occupied by Edward I of England when he invaded Scotland and found the castle abandoned. Stirling Castle was taken by the English after the Battle of Stirling Bridge in 1297, but the ownership of the castle continued to switch several times between the English and Scots during the Scottish Wars of Independence.

Scotland is The Home of Golf and boasts over 500 courses, greens and fairways up and down the country in every region, providing a true golfing paradise for the avid golfers. There is a wide variety of courses to suit everyone, from the beginners all the way to the experienced pros. Aberdeen is home to more than 70 courses (all within an hour’s drive of Aberdeen Airport), which were designed by top names in golf architecture, such as ‘Old’ Tom Morris, James Braid and Dr Martin Hawtree.

5. Glasgow is bursting with arts and culture

A vibrant and entertaining city, Glasgow boasts a prominent arts and culture scene. Home to more than 20 museums, some of which are free to enter, there will be plenty to discover on your trip to Scotland’s biggest city.

Delve into the life and works of one of Scotland’s most famous artists, Charles Rennie Mackintosh, and tour around the city to spot many of his designs in attractions such as the Mackintosh at the Willow, The Lighthouse, and House for An Art Lover. There are many other galleries and centres in Glasgow where you can explore the city’s artistic side, such as the Gallery of Modern Art, Kelvingrove Art Gallery & Museum, the Hunterian Art Gallery and more.

You don’t need to be nestled in the lush countryside of Scotland to witness our elusive wildlife. In fact, Scotland has had its fair share of interesting encounters with all sorts of animals throughout the years.

Edinburgh Castle was once home to an elephant! Yes, you heard that right. In 1838, the 78th Highlanders returned from a post out in Sri Lanka and brought an elephant back with them as their regimental mascot. It was later said that, in true Scottish style, it quickly developed a love for beer!

Elsewhere, the world’s only knighted penguin lives at Edinburgh Zoo. Sir Nils Olav lives among the rest of the penguin colony in Penguins Rock, which also includes the largest outdoor penguin pool in Europe, and at the zoo you can even see a 4-foot tall bronze statue of Sir Nils.

On Scotland’s north east coast, keep your eyes peeled for bottlenose dolphins and basking sharks which often make an appearance in the Moray Firth and off the Aberdeenshire coastline. Or head inland where you can visit Scotland’s only safari park, Blair Drummond in Stirling.

7. Edinburgh is the greenest city in the UK

Did you know that Edinburgh is home to 112 parks and gardens? In a recent study, Edinburgh took the top spot, closely followed by Aberdeen and Glasgow, for its abundance of green spaces and low pollution levels. The study compared factors such as air quality, pollution and single-use plastic use.

Scotland is home to hundreds of incredible parks and gardens, the majority of which are free to enter and create the perfect tranquil place to relax and watch the world go by. Whether you want to chill in the sun under the towering Edinburgh Castle in Princes Street Gardens, wander among the exotic species in the Royal Botanic Gardens, or hike up an extinct volcano in Holyrood Park, there’s plenty to choose from in Edinburgh.

8. Glasgow is home to one of the oldest underground railway systems in the world

Have you ever heard of the expression ‘Clockwork Orange’? Glasgow’s underground railway system is often referred to as the ‘Clockwork Orange’ because of its unique colour and circular shape. The city’s subway opened in 1896 and is the third oldest underground railway system in the world, after the London Underground and Budapest Metro. It’s one of the easiest ways to get around the city centre and West End of Scotland’s largest city, with 15 stations, affordable fares and easy maps to follow.

9. The richest square mile in Europe was in Dundee

Dundee is a compact, cosmopolitan city that is known for its design and innovations throughout the centuries. It is the fourth largest city in Scotland and is home to the suburb of Broughty Ferry which was once referred to as the richest square mile in Europe. The jute industry in Dundee was one of the city’s main trades and the jute barons saw Broughty Ferry to be the ideal place to build their mansions. It was therefore recognised as being more prosperous than any other location in the UK or Europe.

Today Broughty Ferry is a popular spot for tourists to visit. With its ancient castle and beautiful stretch of beach, it’s the perfect place to visit if you fancy a break from the city but don’t want to stray too far. The views are excellent too!

10. Scotland’s Cities boast some of the longest rivers and deepest lochs in the UK

We’d be here all day if you wanted to count all the rushing rivers and glistening lochs in Scotland, so just take it from us, there’s a lot! You can find these incredible natural features in all the nooks and crannies of Scotland and, yes, you guessed correctly, even in our spectacular cities.

The River Tay passes through Perthshire and the ‘Fair City’ of Perth before reaching Dundee, and is the longest river in Scotland, stretching for a massive 119 miles. Further north in Inverness, Loch Ness holds more fresh water than all the lochs and lakes in England and Wales combined. It is 23 miles long and about a mile wide. Given its staggering size, we wouldn’t be surprised if Nessie really was hiding in there! 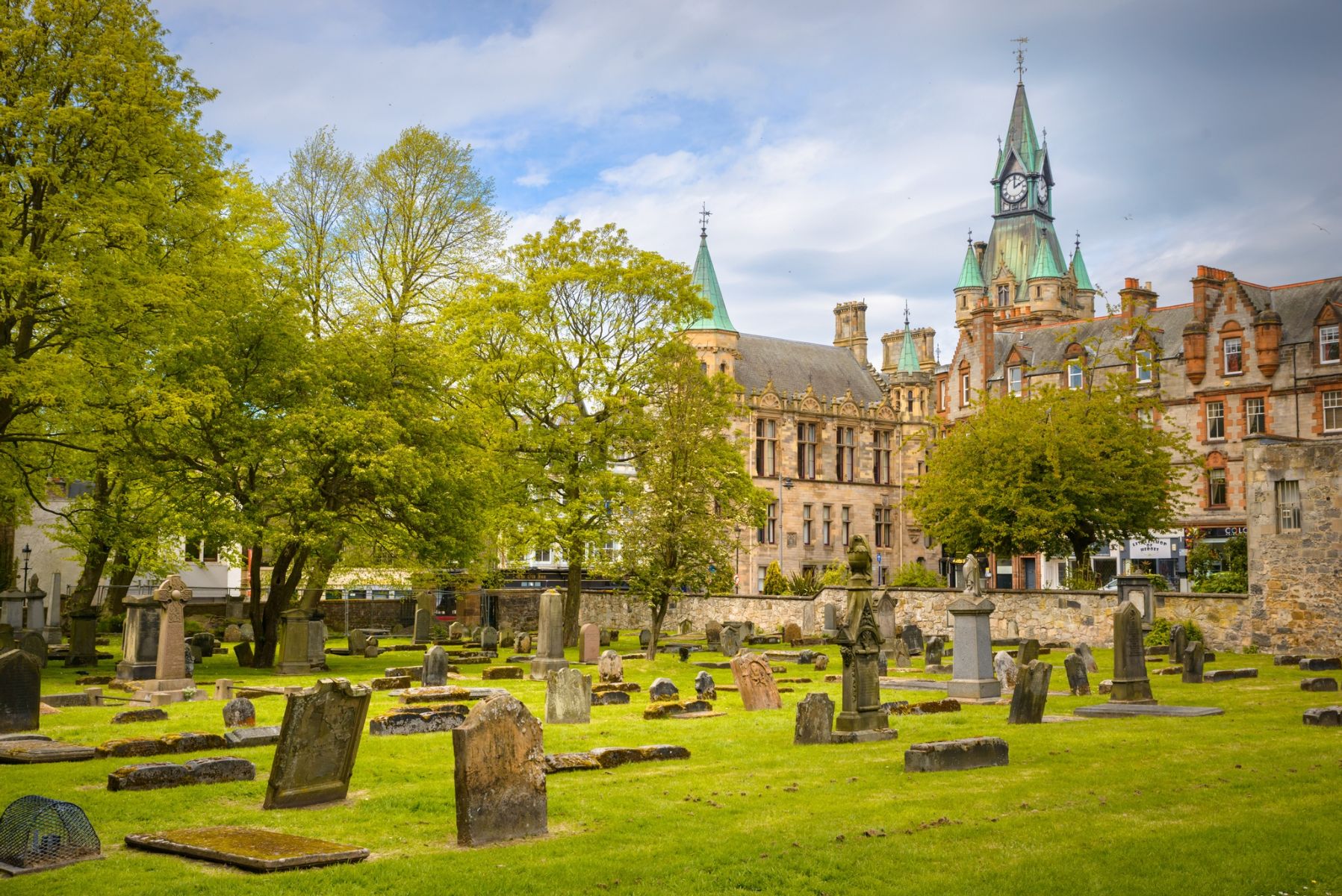 Scotland’s newest city Dunfermline is a real historical gem. Did you know that the city was the birthplace of James I in 1394, Charles I in 1600 and philanthropist Andrew Carnegie in 1835? During his life Carnegie travelled away from Scotland to lead the expansion of the American steel industry. In his final years, he donated 90% of his fortune to Pittencrieff Estate in Dunfermline, which later became Pittencrieff Park, as well as a free library and swimming baths. Carnegie’s birthplace, a humble weaver’s cottage, has been preserved and extended to include a museum of his life.

Dunfermline is also the burial place of Robert the Bruce – who became the last of the seven Scottish kings to be buried at Dunfermline Abbey in 1329. His name is carved at the top of the abbey.

We hope this has broadened your knowledge of Scotland’s amazing cities and inspired you to come and visit them for yourself. Why not plan a city break? Or follow one of our handy 24-hour city itineraries to help you make the most of your trip in Scotland.