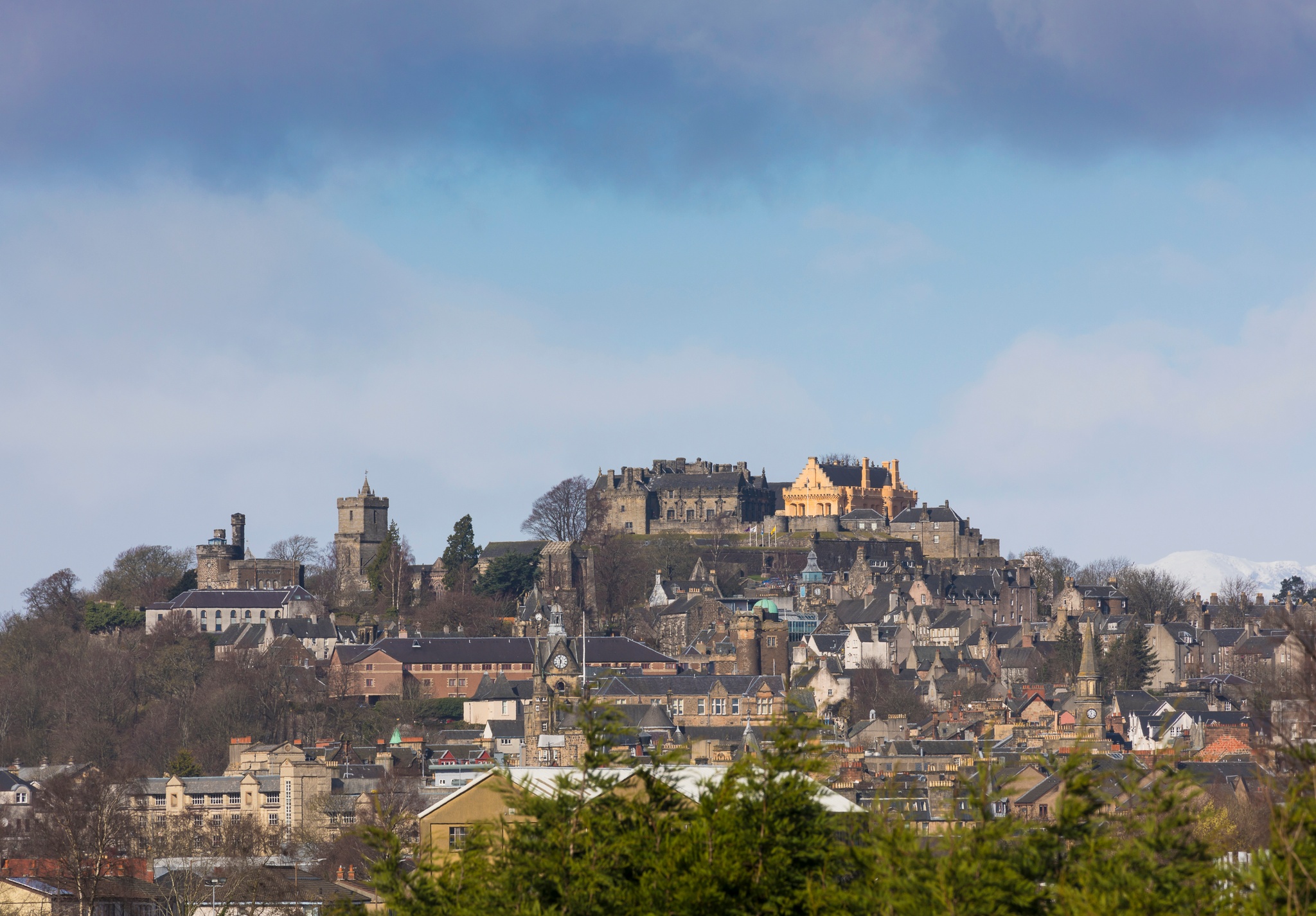 With its impregnable castle perched atop a rocky volcanic crag, the Old Town of Stirling with its cobbled medieval alleyways, ancient buildings and the Wallace Monument towering in the backdrop, is a treasure trove of hidden gems and fascinating details. But don’t stop here. Explore its secret enclaves below and venture further afield to its neighbouring towns for yet more surprising discoveries.

A post shared by The Stirling Highland Hotel (@stirling_highland_hotel)

The “Spittal” dates all the way back to medieval times and is an abbreviation of the word “hospital”. The long street owes its unusual name to the 12th century St Peters Hospital which once stood here and served as a hospice for retired priests.

Street secret: Just down the street from the Stirling Highland Hotel is the striking Hotel Colessio. Formerly a bank, it was then used as the city’s hospital and has now been beautifully converted to a modern, luxury hotel.

Find out more about the Hotel Colessio

Stay: Stirling Highland Hotel, Spittal Street. This elegant Victorian building was originally built as a school in the 1850s. The hotel includes an observatory which was gifted to the school in 1889, as well as a 130 year-old telescope. Tours of the observatory are available.

Find out more about the Stirling Highland Hotel

Journey back to Stirling’s magnificent royal past on the ancient cobbled street of Castle Wynd which leads to Stirling Castle, the wonderfully preserved Renaissance palace of the Stewart kings and queens. Here you’ll also find incredible relics from this period, including the town houses of Argyll’s Lodging, Mar’s Wark and the Portcullis Hotel – home to one of Stirling favourite pubs.

Street secret: Argyll’s Lodging was the home of Sir William Alexander, Earl of Stirling. The 17th century courtier was the founder of the New Scotland colony in Nova Scotia, now part of present-day Canada.

Find out more about Argyll’s Lodging

Stay: The Portcullis Hotel, Castle Wynd. Housed inside an 18th century converted schoolhouse, this family-run hotel and popular pub has history. It stands on the site of an even older schoolhouse where King James VI was educated and also served as a military base and store for the Argyll & Sutherland Highlanders regiment. Gather round the seven ft-high ornate fireplace and enjoy the delicious pub fare.

Find out more about The Portcullis Hotel

Located right in the heart of Stirling, King Street is the most convenient place to base your stay in the city. Lined on either side by elegantly adorned sandstone buildings, it connects to the streets leading up to the castle, as well as modern shopping hubs: The Thistles and The Marches.

From 10 – 11 September 2022, the city invites you to its exciting new festival. The Stirling Open Streets Festival will be a weekend of fun activities for the whole family to enjoy. Head on down to King Street for mask making, entertainment from Central FM presenters Liam and Shaz, and catch a quirky performance from the seagull street performers.

Street secret: By the early twentieth century, the street boasted no less than six banks, all of which had incredibly ornate façades and interiors which remain intact today. Together, with equally impressive three (former) hotels and an array of Stirling family businesses, the street is regarded as the jewel in the city’s architectural crown.

Stay: The Golden Lion, 8-10 King Street. The oldest building in King Street is the Golden Lion Hotel, originally built as an inn, with its majestic lion on the entrance porch. Robert Burns visited in 1787 and, dismayed at the decay of Stirling Castle, he famously wrote the “Stirling Lines”.

Find out more about The Golden Lion

Victoria Square overlooks the prestigious Kings Park conservation area of Stirling. Set against the backdrop of Stirling Castle, across from grand Georgian and Victorian terraced houses, this genteel enclave offers easy access to the city’s most popular attractions on foot.

Street secret: The beautiful and serene King’s Park area of Stirling, located to the south side of the city, is an area with significant royal connections – indeed King’s Park itself is Scotland’s oldest Royal Park and was an integral part of life at Stirling Castle, including hosting jousting tournaments in Medieval times.

Find out more about King’s Park

Stay: Victoria Square, 12 Victoria Square. This award-winning guest house offers the luxury of a 5-star boutique hotel with the personal touch of an old-fashioned bed and breakfast. Treat yourself to a traditional afternoon tea featuring homemade savouries and sweet treats. You can even order a picnic basket up to your room.

Find out more about staying in Victoria Square

A post shared by The Battle Of Bannockburn (@bannockburnnts)

The Glasgow Road forms part of the A872 and starts in the district of St Ninians, located just a mile south of the city centre.

Find out more about the Battle of Bannockburn Visitor Centre

Stay: King Robert Hotel, Glasgow Road. This comfortable family-run hotel is located on the site of Bannockburn and is well-suited for exploring everything that Stirling and the wider area has to offer.

Discover more about a stay in the King Robert Hotel

Located on the banks of the River Teith, Callander is a bustling market town just on the cusp of the Loch Lomond & The Trossachs National Park and the Highlands beyond. The Main Street is a great place to pause on your journey north with plenty of cafés, independent shops and accommodation, including the characterful Dreadnought Hotel which was originally built by a clan chieftain!

Street secret: Around 85 AD the Romans built a fort beside the River Teith and named it Bochastle. It was one of many military installations built to defend against hostile indigenous tribes, including the Picts. Mounds of the ancient fort survived and you can visit them by following the former Oban to Callander railway line which has been converted into a public footpath.

Stay: Roman Camp Hotel, 182 Main Street. This utterly charming country hotel with its sugar-pink exterior is perfect for a rejuvenating break.  Built in 1625 for the Dukes of Perth as a hunting lodge, it has been a hotel since 1939 and is renowned for its restaurant, the recipient of three AA rosettes.

Bridge of Allan is a former spa town nestled at the foot of the Ochil Hills. The town retains much of its historic character, especially Henderson Street – a charming thoroughfare populated with beautiful period buildings and landmarks, including the Allanwater Café.

Street secret: In 1745, hundreds of Highlanders commanded by Bonnie Prince Charlie built a roadblock on the bridge and demanded tolls. One of the toll posts erected by the army remains on the path leading up from Henderson Street.

Stay: The Meadowpark, 56 Kenilworth Road. This listed building oozes charm and style. Stay in one of the new boutique rooms, or book the Castle Suite for a dramatic view of Stirling Castle. It’s also a great spot for food and drink, with a cosy restaurant or beer garden to choose from.

Street secret: No visit to Dunblane is complete with a visit to Wimbledon Champion and local boy Andy Murray’s gold Royal Mail post box, located in the High Street. The post box was painted gold in honour of the tennis star’s gold-medal victory at the 2012 Olympics.

Stay: DoubleTree By Hilton Dunblane Hydro, Perth Road. With blissful views of the Perthshire countryside, classically designed rooms, exceptional cuisine and 10 acres of private parkland, this traditional spa hotel with its modernised interior has everything you could want from a relaxing country staycation.

Discover more about staying at the Dunblane Hydro, or read more about Dunblane

Venture to the outskirts of Stirling and explore this peaceful neighbourhood across the River Forth. Here you will find a beautiful old Augustinian monastery from the 12th century where Robert the Bruce held his parliaments. Cambuskenneth Abbey was abandoned during the Scottish Reformation and today only the tall campanile tower survives.

District secret: Take a walk around this quiet and green district off the beaten track. One of the routes you can take starts with crossing the Shore Bridge, over the railway and into Riverside. Follow the course of the river and take in traces of the industries which once flourished here. Continue onto Abbey Road before crossing the pedestrian bridge to Cambuskenneth.

Stay: Inglewood House & Spa, Tullibody Road, Alloa. Located just six miles from the abbey, this luxurious retreat is housed inside an incredible Jacobean mansion in the sleepy Clackmannanshire countryside. This state-of-the-art spa and leisure centre is among the finest in Scotland.

Make the most of your stay in Stirling by visiting its wealth of attractions – read our one-day itinerary to find out more.

Remember to share your city adventures with us on social media! Use #VisitScotland or #OnlyInScotland to give us permission to re-post on our social media channels.