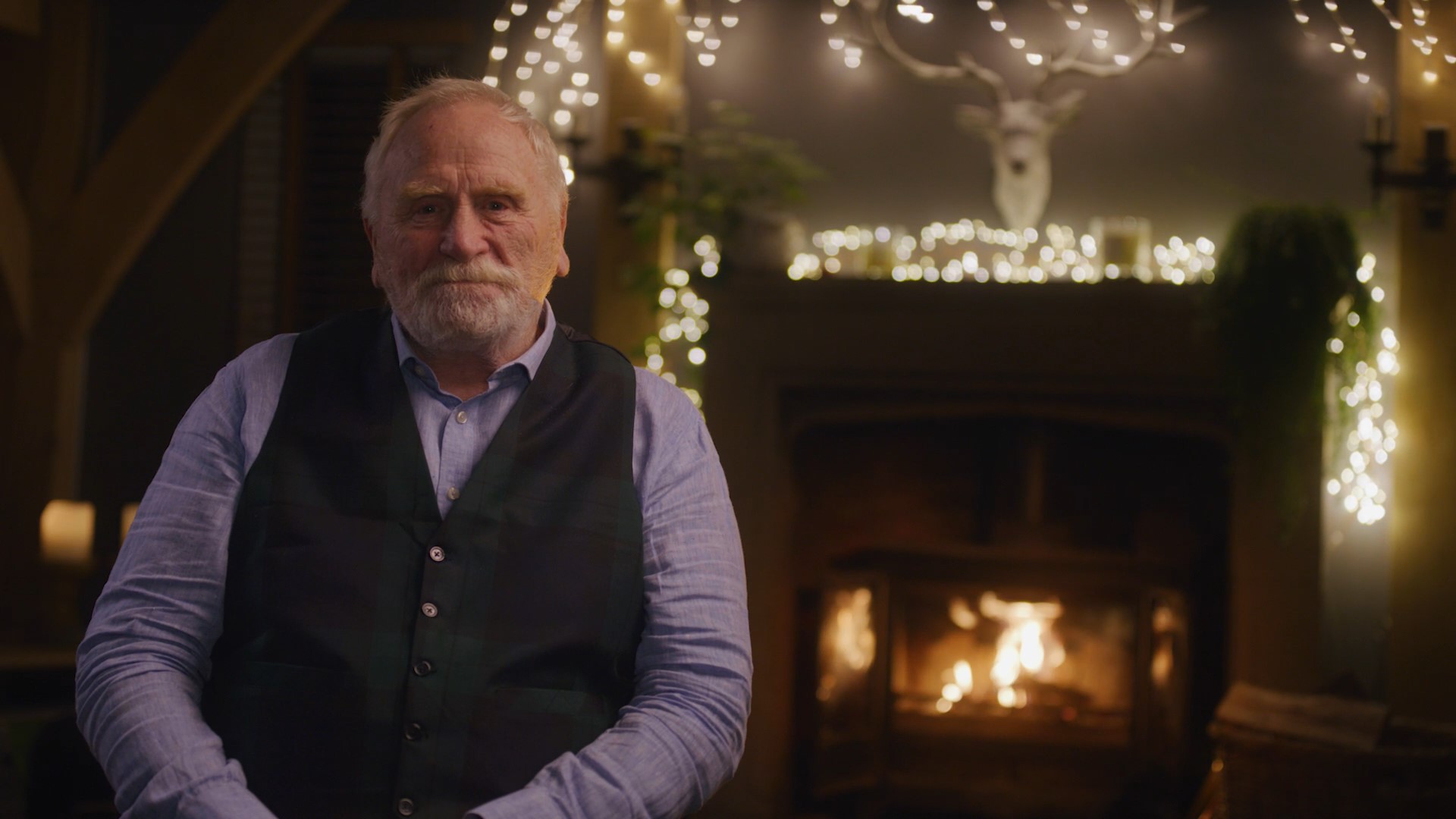 Each year in Scotland, children across the country eagerly practice reciting Scots poems as part of their homework in the hope of being crowned their school’s ‘Burns Champion’ ahead of Burns Night – the annual birthday celebration of Scotland’s National Bard, Robert Burns.

The tradition of children in Scottish schools learning Scots poems and songs is longstanding and embedded in Scottish culture, so much so that it is part of the Scottish school curriculum. To celebrate all things Scots language, we surveyed 1,000 Scottish adults to see exactly what their favourite Scots poems are. We’ve also teamed up with Game of Thrones actor and Scottish acting legend, James Cosmo, who has recited Scotland’s favourite Scots poem, ‘To a Mouse’ by Robert Burns, for us!

Interestingly, our survey found that out of Scotland’s top 10 favourite poems, seven are by Robert Burns! Check out the top 10 below.

Learn more about Scots poems by watching our Q&A with James Cosmo.

Robert Burns’ ‘To A Mouse’ came out in our research as Scotland’s number one Scots poem, with over a fifth of Scots saying this was the favourite one they learned as a child.

Burns wrote the poem in November of 1785, and the eight-verse tale is, unsurprisingly, about a mouse. In the poem, the narrator, who we might assume is Burns, accidentally destroys the mouse’s nest while ploughing a field. While the proposed subject matter might seem heartfelt, the poem has much deeper undertones, illustrating Burns’ tolerance of all creatures and his humanity to all.

Read ‘To a Mouse’

“This truth fand honest Tam o’ Shanter, As he frae Ayr ae night did canter”.Scotland’s second most popular Scots poem was Robert Burns’ ‘Tam O’Shanter’ which, as this line of the poem shows, is set in the Scottish town of Ayr.

The poem tells the tale of a farmer called Tam, who often gets drunk with his friends in a local pub. The night described in the poem sees Tam making his way home, drunk, on his horse called Maggie, whilst the narrator tells the listener of Tam’s thoughtless ways, specifically towards his wife, who is waiting angrily for him to arrive home. On his journey home, Tam encounters many supernatural beings, including witches, warlocks, and even the Devil himself playing the bagpipes. 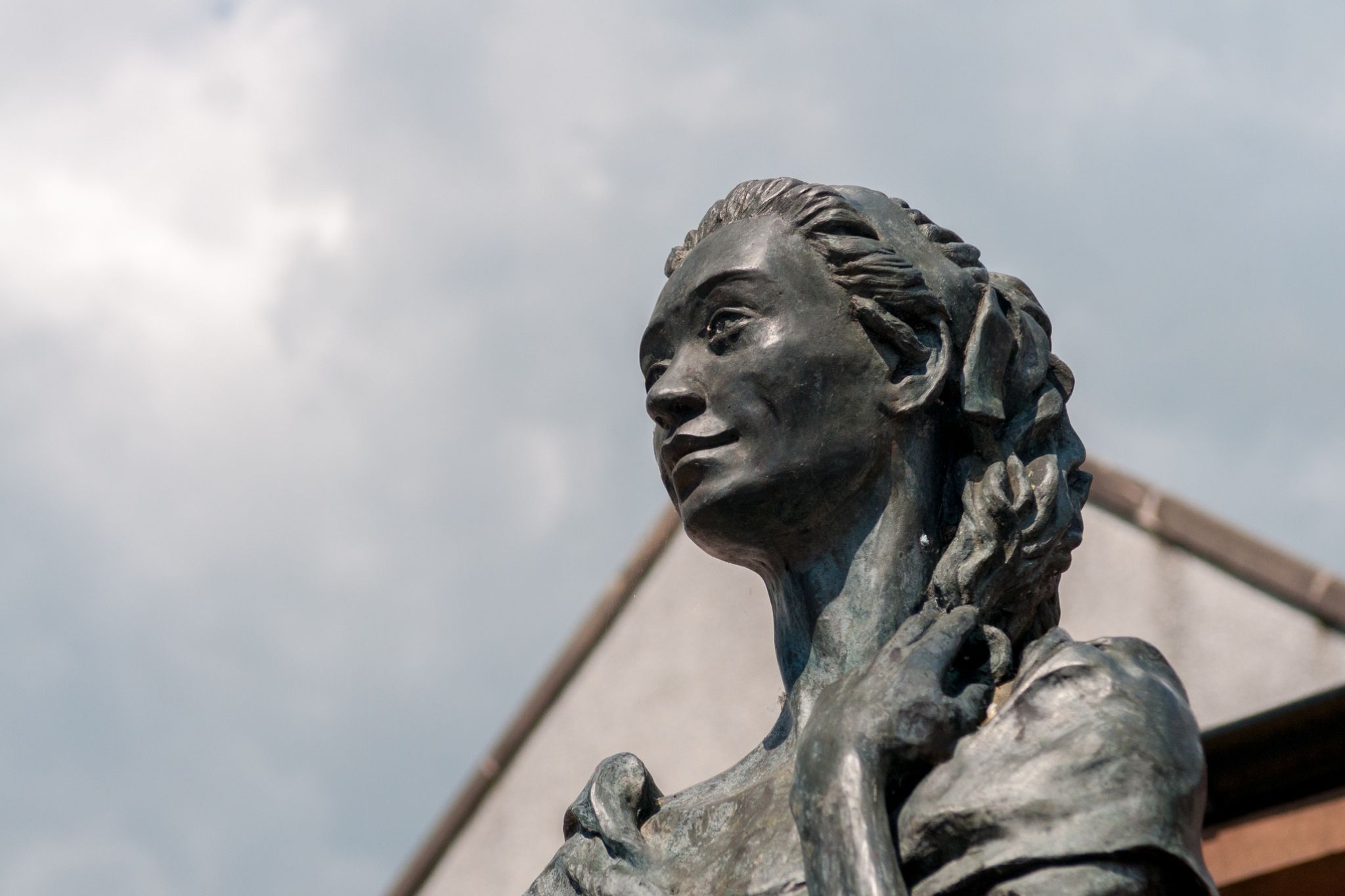 The statue of Jean Armour, located in Machline, Ayrshire

Our research found Burns in the third spot of Scotland’s favourite Scots poems too! ‘A Red, Red Rose’ could perhaps be considered the most romantic of Burns’ poems and is said to have been written for his wife, Jean Armour.

“And I will come again, my luve, Though it were ten thousand mile.”

4. ‘Address to the Haggis’ by Robert Burns 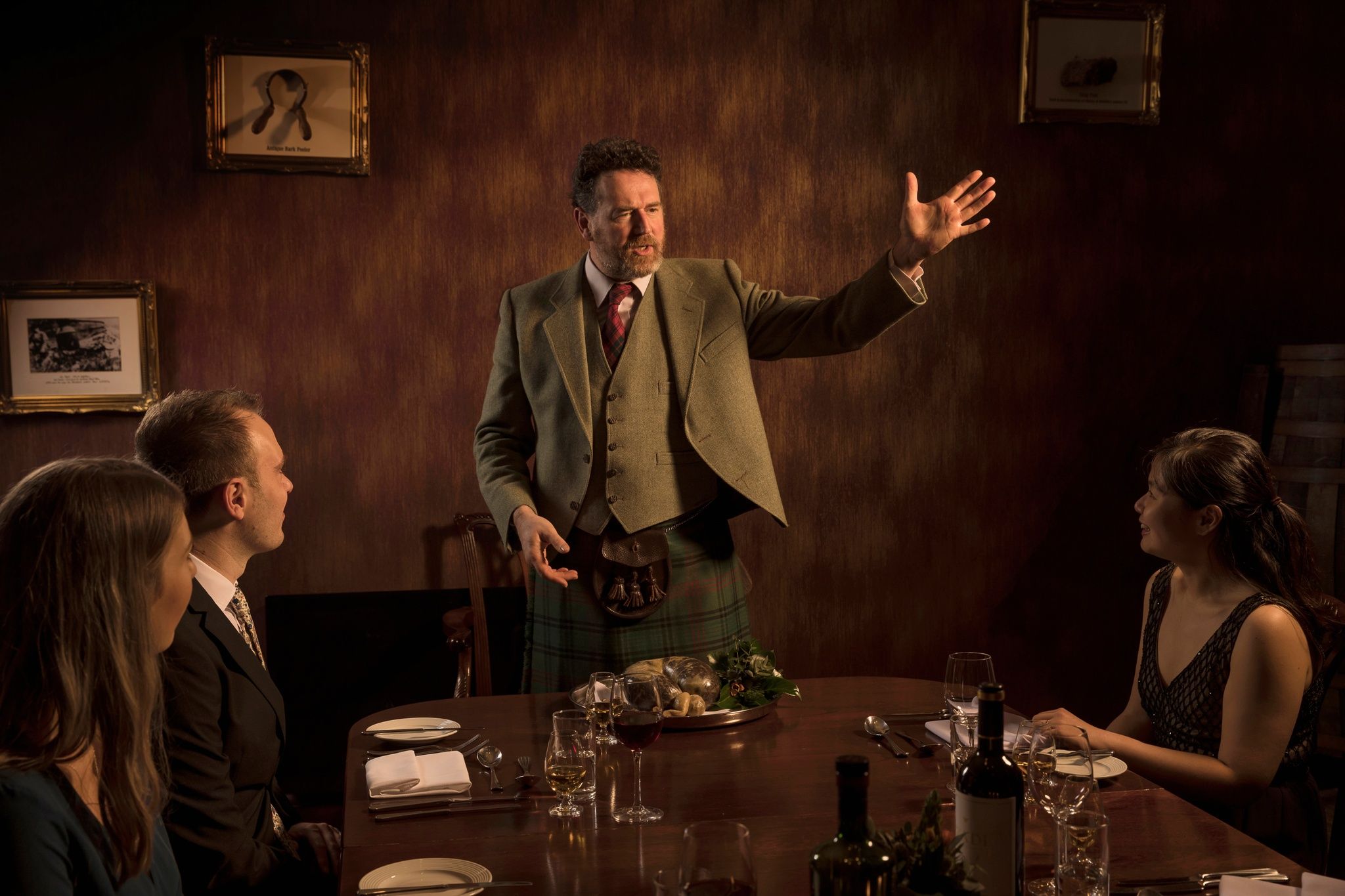 Addressing the haggis at a Burns Supper

Coming in fourth was ‘Address to the Haggis’, which is a Scots poem most often recited on Burns Night before the Burns Supper commences. Traditionally, when the Haggis is brought out to the table, one of the attendees of the Burns Supper will ‘address’ the Haggis using Burns’ poem.

Burns wrote the humorous poem in 1786 to celebrate his appreciation of the Haggis, and as a result, Burns and the Haggis are now forever linked.

Read ‘Address to the Haggis’

Once again, Burns is the poet coming out on top, with his poem ‘A Man’s a Man for a’ That’ coming in as Scotland’s fifth favourite Scots poem.

The poem is famous for highlighting Burns’ open outlook on society, with the story describing how the true worth of man is not defined by status, wealth, or possessions. With the poem endorsing equality for all in society, some critics hail it as important to society now as it was then! Interestingly, when Burns wrote the poem in 1795, he was not of a high enough social class to vote…

6. ‘The Sair Finger’ by Walter Wingate

The first non-Burns Scots poem to make the top ten list is, ‘The Sair Finger’ by Walter Wingate.

Walter Wingate was born in 1895 in the town of Dalry in Ayrshire. This poem is much-loved by Scots across the country and is a story about a ‘wean’ (child) with a ‘skelf’ (splinter) in his pinkie. The child in the poem has his splinter removed by the narrator, with the final verse telling us about another child who comes along to claim they have a splinter too: “Your finger sair ana’? Ye rouge. You’re only lettin’ on”.

The “lettin’ on” shows that the other child is pretending to have a splinter so that they can have a bandage on their finger too.

‘A Dug, A Dug’ by Billy Key comes in as Scotland’s seventh-most favourite Scots poem, according to our survey. ‘Dug’ is the Scots word for dog and the Billy Keys poem comes from ‘The Kist’ – a collection of Scots and Gaelic poetry and prose.

The poem features a child asking their dad for a pet dog, with the starting line: “Hey, daddy, wid yi get us a dug?”. The child longs for a dog so much that they ask for any breed of dog, saying they’d be happy to have “a big broon Alsatian”, “a wee white pug”, “a skinny wee terrier” or a “big fat bull”. 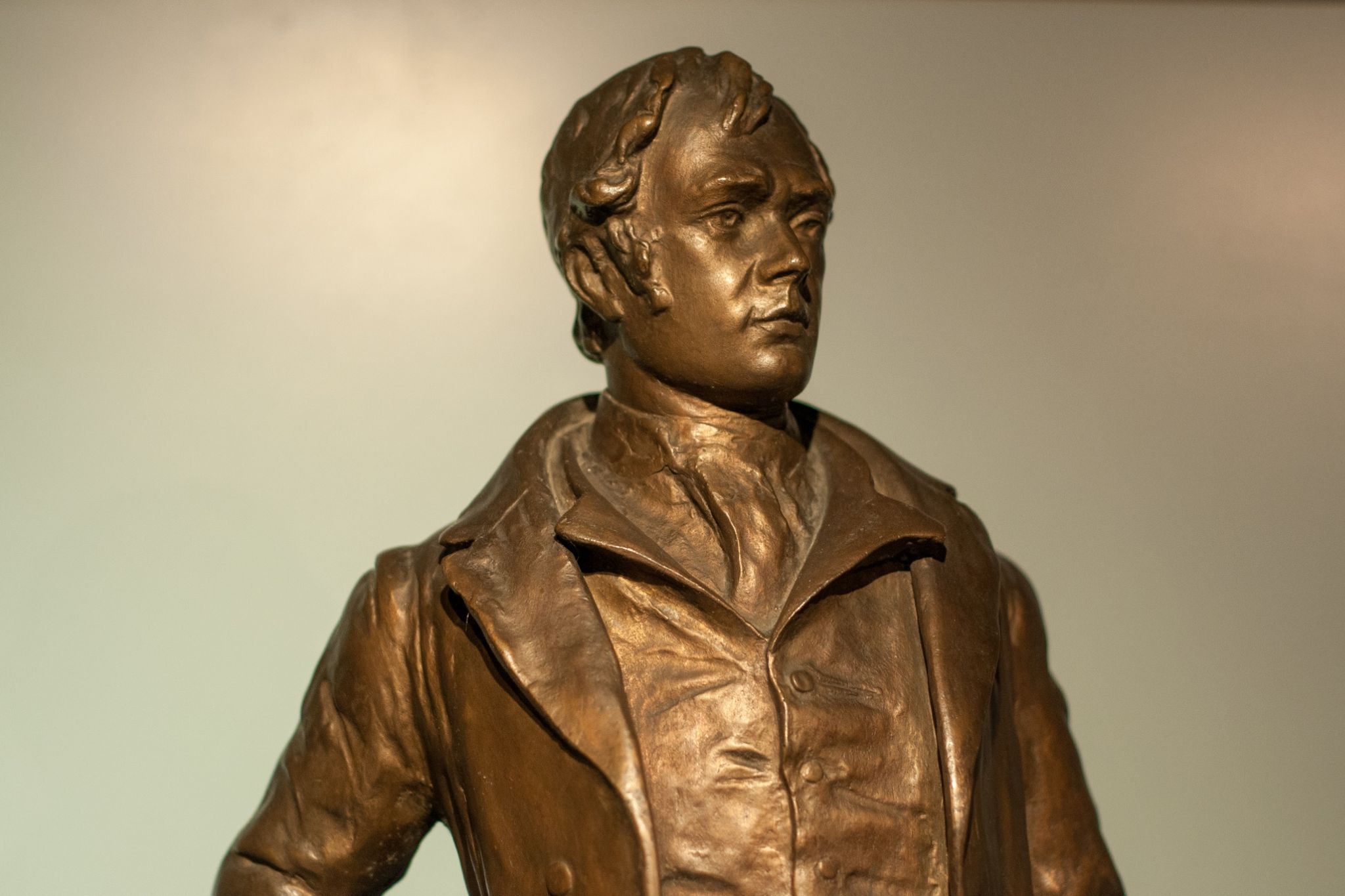 Not to be mistaken with the most popular Scots poem, ‘To a Mouse’, this poem depicts something a little bit different than a little mouse in a field. ‘To a Louse’ by Robert Burns is about a head louse he spots in church crawling upon the hat of the lady sitting in front of him.

In the poem, Burns observes the fact that the louse does not pay attention to class distinctions like humans do, and the louse considers everyone equally – as all humans are simply hosts to lice.

And as Burns himself concludes:

“O wad some Power the giftie gie us. To see ourselves as others see us”.

Suggesting that we cannot see ourselves as others do, and we should be kinder as such.

Read ‘To a Louse’

Coming in as Scotland’s ninth-most favourite Scots poem is Robert Burn’s ‘Willie Wastle’. The poem is a less than complimentary tale about a man named Willie Wastle’s wife, with Burns describing her as ‘dour’ (grim), ‘din’ (dingy-coloured), and ‘bow-hough’d’ (hunched).

The narrator is openly not very fond of Willie Wastle’s wife, ending every stanza with the line “I wad na gie a button for” (I wouldn’t give a button for her), which is a metaphor to say that he dislikes her so much, he wouldn’t even give her as much as a button!

And finally, Scotland’s tenth-most favourite poem is ‘The Crocodile’ by J.K. Annand.

Annand was a Scottish poet born in 1908 in Edinburgh and worked as a teacher throughout his life, which undoubtedly provided him with a great source of inspiration for his work. The poem tells the tale of – you guessed it – a crocodile, with the narrator of Annand’s poem bumping into a crocodile while travelling down the River Nile, where they have a conversation about how the crocodile brushes his teeth!

The crocodile replies that a bird cleans them for him because it saves him money at the dentist: “…saves me monie a dentist’s fee”.

Fantastic arts and culture events in 2023