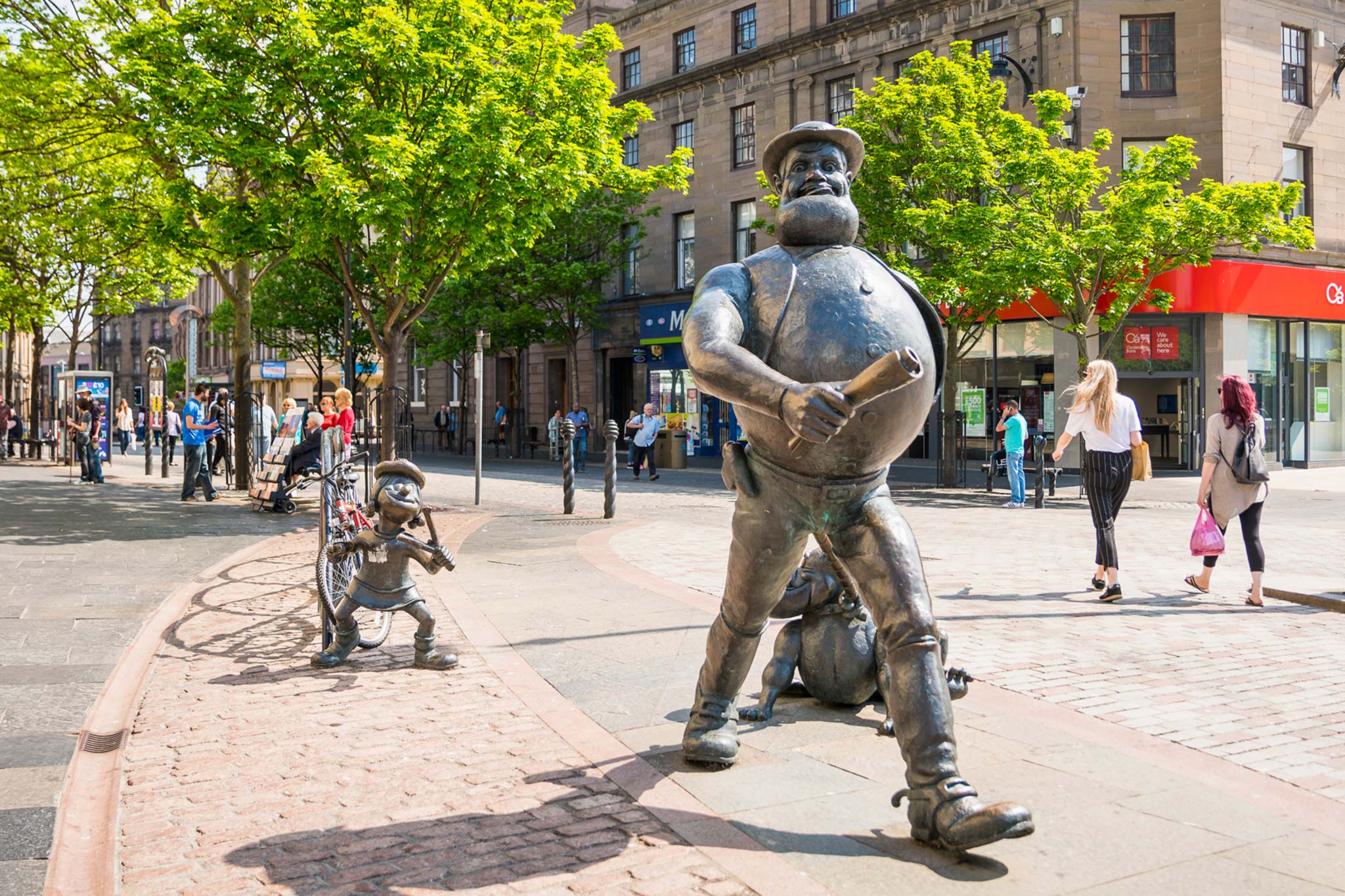 Planning a city break in Scotland’s sunniest city, Dundee, and trying to figure out where to stay? We have rather an out-of-the-ordinary guide to some of the coolest streets to stay in Dundee, named in Lonely Planet’s Top 10 ‘Best in Europe 2018’ destinations. Whether you’re looking for cute and colourful, famous, or under-the-radar, there are pretty streets and picturesque lanes full of charm and history that you will just love to wake up to and start your day from.

A stay in this neighbourhood invites you to become part of the city’s industrial story spanning nearly 200 years, where jute mills once stood side by side with factories and the docks were filled with trading ships. Located close to Dundee’s waterfront and in the heart of the shopping district with an extensive range of well-known global brands, Constable Street in Lower Dens Mill is the perfect location to rediscover Dundee’s jute-spinning past.

Street secret: The neighbourhood, home to many former mill buildings, is easily identified on the skyline by the elegant and distinctive bell tower modelled on the Santa Maria della Salute in Venice, making it easy to orient yourself from almost anywhere in the city.

Stay: Hotel Indigo,Lower Dens Mill, Constable St – Set in a peaceful location only five minutes’ walk from the city centre of Dundee, Hotel Indigo is a former textile–mill–adapted boutique hotel that skilfully elevates the once derelict building to its original glory. Expect to see bold, minimalist design with bare-brick walls and hardwood timber floors that perfectly reflect the city’s industrial heritage. The old original features are beautifully mixed with contemporary elements and facilities such as spa and gym (check with hotel for current services), and a stylish bar. The hotel boasts 102 bespoke rooms decorated by local producers, with touches that reflect the city’s textile heritage. Don’t miss a chance to dine at the Daisy Tasker restaurant, the hotel’s tribute to the heart and spirit of Daisy Tasker – a young mill worker much–loved for organising social activities for her fellow weavers –which specialises in locally sourced produce. All in all, the hotel has a witty, stylish and inviting look and feel that is sure to wow everyone who steps through its front door.

Located in the prime location close to the waterfront and the railway station, a stay on Whitehall Crescent is not only a great choice if you’re planning to hit the shops, but some of the city’s main attractions are just on your doorstep, including Slessor Gardens and RRS Discovery. At the V&A Dundee, take a peek inside the Mary Quant exhibition and explore how the revolutionary fashion designer shook up the British high street.

Street secret: The building that houses Malmaison Hotel today was originally the premises of the Mathers Temperance Hotel opened in 1899. The hotel’s creation was inspired by the temperance movement of the 19th century which promoted prohibition of alcohol. It was later sold in 1969 becoming the Tay Central Hotel and then the well-known Tay Hotel.

Stay: Malmaison Dundee Hotel, 44 Whitehall Crescent – It’s chic, it’s stylish, yet it retains and respects original features as they were built in 1899. Malmaison Dundee Hotel is a beautifully reconstructed Victorian building with a mixture of historic character and modern flair that has all the facilities for a comfortable stay. Take your pick from 91 sumptuous rooms and suites adorned with touches of velvet, and each complete with a picture of cartoon character Dennis the Menace (created by Dundee-based publisher DC Thomson); enjoy the chilled delights of the minibars stocked with a couple of bottles of good wine and even some champagne; or feel like royalty walking down the grand stairs. Definitely the most eye-catching of the hotel’s features, look out for the restored MH lettering in the decorative wrought iron filigree of the staircase. Whether you choose to relax with cocktails in the stylish Mal Bar or grab something to eat in the splendid, contemporary Chez Mal Brasserie furnished with button-back Edwardian rococo, you will not be disappointed to stay in the Malmaison Dundee.

Located in the bustling centre of Dundee on the pedestrianised High Street, look out for the 8 ft tall bronze statue of Desperate Dan, hero of DC Thomson’s ‘The Dandy’ comics, and on the street’s east end don’t miss the sculpture of The Dragon, who legend has it slayed nine sisters who went to fetch water for their father from their local spring. A carved Pict symbol stone near Bridgefoot, Angus, marks the spot where the dragon was allegedly slain. Just off the street is the City Square, the heart of Dundee. It’s the perfect place to sit and eat lunch outside while taking in the architecture, enjoying live concerts (when they return) and the hustle and bustle of the city.

Street secret: Look out for The Pillars, a historic clock high up on a building on High Street featuring a model of Dundee’s old Town House, with its ‘Memory of Time’ inscription. It stood in the city centre for over 200 years before it vanished during a refurbishment around the city square. It has been restored to its former glory after being pulled from the skip nearly twenty years ago.

Stay: Dundee Backpackers Hostel, 71 High Street – Set within five beautifully restored period buildings, one of which dates to the 16th century, Dundee Backpackers Hostel is a unique accommodation offering a selection of private rooms on Dundee’s bustling High Street. Each building reflects the style and character of the time in which it was built. There are feature fireplaces, plaster cornices and windows of all shapes and sizes. You’ll find here a range of dedicated chill-out common areas, including a music room with a record player and vinyls and a piano to tinkle on, and an extensive library and the reading room. All of the buildings even have their own little ‘museum’ full of information and artefacts from the buildings’ history. Definitely a unique choice for your stay in Dundee!

Nethergate enjoys an enviable location, right in the heart of Dundee’s cultural West End, only minutes away from the waterfront and the main attractions. It forms part of Dundee’s conservation area, including some of the city’s most historic buildings. Enjoy discovering the network of streets, lanes, paths and courtyards that contribute to the character of the area, offering a variety of attractive spaces, some quiet, some busy, but all equally charming.

Street secret: Winston Churchill was frequently spotted in the area as he used the then Station Hotel as a base between 1908 and 1922, during his time as MP for Dundee. Frank Sinatra also stayed here in 1947 during his only visit to the city.

Stay: Best Western Queens Hotel, 160 Nethergate – Opened originally in 1878 by Dundee’s wine merchant Col Smith as a Station Hotel (described as the ‘swankiest and poshest hotel in Bonnie Dundee’) in anticipation of the imminent arrival of the railway station in Dundee, today the Best Western Queens Hotel blends modern day expectations of style and comfort with the wonderful original features and  authentic Victorian heritage. The venue offers an excellent choice of 53 rooms spread over six floors, each one unique in its shape and size and elegantly decorated with rich fabric and colourful cushions, with either a view of the silver River Tay or over the stunning city–scape of Dundee. At the QBar, you will find good and hearty food after a busy day exploring, while the cosy Cafe Bar offers a selection of delicious morning coffees and classic cocktails.

Located just off the A90, between Aberdeen and Edinburgh, Kingsway West is situated on the western edges of Dundee, only a short drive from the city centre. Camperdown Country Park, the largest park in the city, is nearby. One of the city’s most popular parks among locals and visitors alike, it offers a state-of-the-art play area to suit different age groups, a fantastic range of outdoor activities, and a year-round calendar of events (keep an eye out for events returning soon). Located within the park is also the Camperdown Wildlife Centre, a fantastic place for a fun family day out with lots of amazing animals.

Street secret: At the beginning of the 19th century, factories were springing up at a rapid pace in Dundee, making many goods such as linen, jute, shipbuilding materials and paper. Several paper mills were created throughout the town including Bullionfield Paper Mills, a part of town today known as Kingsway West.

Stay: The Landmark Hotel Dundee and Leisure Club, Kingsway West – A splendid historic hotel located just to the north of the historic Bullionfield Paper Mills. Originally known as Greystane House, a family home of the mill’s manager David Watson and his wife, this magnificent two-story manor with stunning Baronial-style architecture offers 95 beautifully renovated rooms that perfectly capture the magnificent Victorian character of the building. While the venue retains many of its original features such as its beautiful wooden ceilings, majestic wall decorations, and romantic Latin inscriptions, modern comforts are woven together wonderfully in every space, including contemporary leisure facilities and a gym (check with hotel for current services), and a conservatory-style Maze Restaurant, an exquisite dining establishment that boasts an AA Rosette recognition.

Street secret: HMS Unicorn, the world’s last intact warship from the days of sail, can be found here in the immediate vicinity.  It’s one of the six oldest ships in the world and Scotland’s only representative of the sailing navy, and today has been preserved as a museum and a visitor attraction.

Stay: Apex City Quay Hotel & Spa, 1 West Victoria Dock Road – A chic and stylish contemporary hotel in the heart of the City Quay development, the rooms each boast stunning City Quay or Tay river views. Enjoy beautifully decorated rooms with floor-to-ceiling windows, take advantage of the award-winning, luxurious Yu Spa – a haven in which to relax after an action-packed day (check with hotel for current services). The dining options at Quayside Bar & Grill are bound to impress, and the contemporary space is the perfect spot to relax. If you have extra time to spare you can sip on refreshing cocktails whilst enjoying the great views of Dundee’s waterfront from the bar.

If you arrive to Dundee by train, you’ll get off right here on South Union Street. Set on Dundee’s prominent waterfront, you can quickly reach the city’s nightlife attractions, shopping centres, museums and Slessor Gardens.

Street secret: For a period, Dundee was the starting station of the longest direct rail journey in Britain – the Virgin CrossCountry service to Penzance in Cornwall, England. Today, the longest through journey is from Aberdeen to Penzance.

Stay: Sleeperz Hotel, 2 South Union Street – A design-led lifestyle hotel located over four floors above Dundee’s railway station. This curved, glass-front building offers 120 beds in stylishly designed rooms with a generous range of features, a contemporary lounge bar, and a modern restaurant where you can relax on plush armchairs in an ambiance that reflects the modern design of the hotel. You can enjoy views over the nearby V&A Dundee, the River Tay and onto the new Waterfront Plaza.

Tell us what you’re up to on your Scottish city adventure on our social media, and how many of the city’s secret spots and hidden gems you’ve managed to explore! Use #VisitScotland or #OnlyInScotland to give us permission to repost on our social media channels.