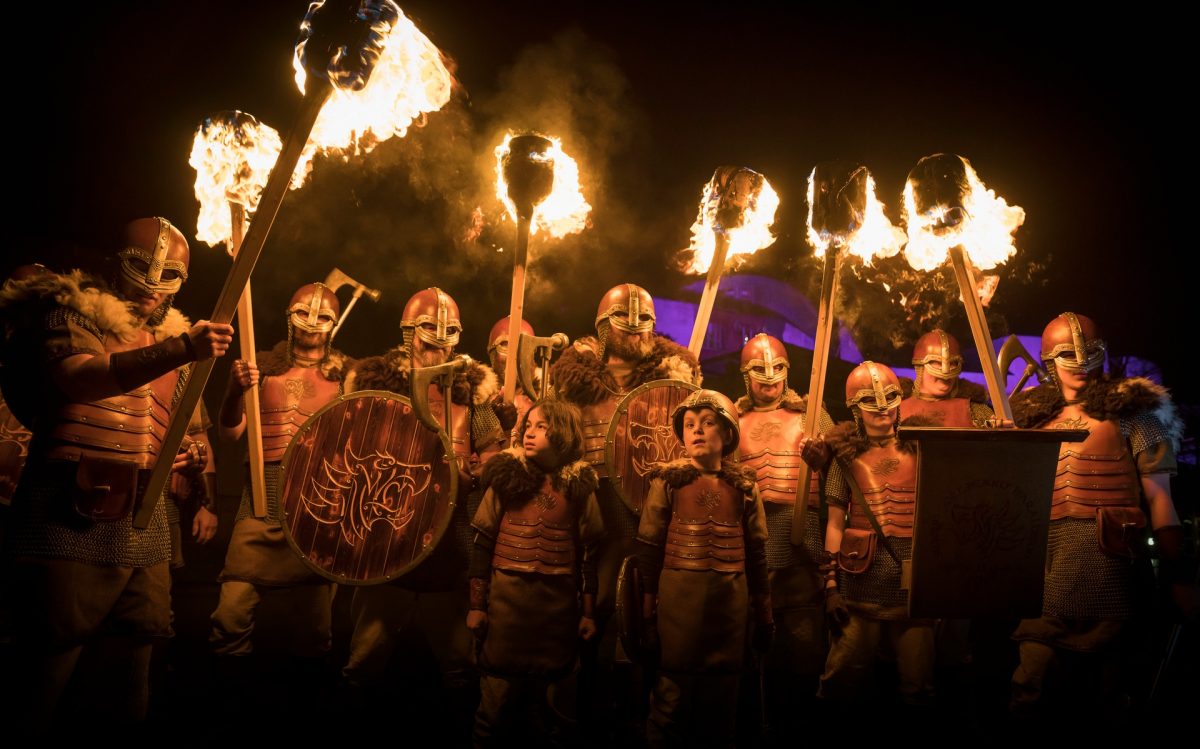 Winged helmets, fur-trimmed tunics, flaming torches and rousing music – the people of Shetland are certainly a fiery lot and know how to throw a party. I sincerely doubt that anyone, even the locals of the windswept Shetland Islands, would call January a bleak month for that very reason.

Taking place annually on the last Tuesday of January in the town of Lerwick, the Shetland’s Viking Fire Festival, or Up Helly Aa as it’s known locally, is the largest event of its kind in Europe. Thousands of visitors from across the world travel to this northernmost corner of Scotland to join in this Scandinavian Vikings’ style celebrations of the end of winter and the return of the sun.

This isn’t your usual subarctic merrymaking, nor is it just another bonfire to lighten up the long, dark winter sky. The islanders stage their annual festival to commemorate the Vikings who once occupied and ruled this land over a thousand years ago for around 500 years before it became a part of Scotland in 1468.

Expect to see a crowd of the latest generation of ‘Vikings’ dressed in sheepskins, carrying axes and shields, and bearing torches as they snake through the town streets to the rousing music of traditional Up Helly Aa songs struck up by a brass band. Headed by the Jarl Squad, the parade’s leading group, the procession pulls behind a lovingly made, life-size replica of a traditional Viking longboat, complete with its dragon’s head prow, to the burning site where it’s later set aflame by fiery torches hurled into its hull and left ablaze on the water. Then, as the galley is being destroyed by the inferno, the crowds sings The Norseman’s Home – a stirring requiem that can break the heart of even the hardiest of Vikings, bringing tears to the eyes, after which the guizers and spectators disperse to local halls to dance the night away.

It’ll be a fast and furious night, that I can tell you for sure. The event is a visual feast like none other and makes even the carousing of Guy Fawkes Night seem a bit tame. Nothing has yet managed to stop the Up Helly Aa’s guizers from celebrating – including gales, heavy rains and even snow – and this year should be no different.

If you’ve only just learned about this fantastic festival and are travelling to Shetland later in the year, don’t worry – the months of February and March will see plenty of smaller fire festivals throughout the islands. They may vary slightly in custom, but all embrace the islands’ Viking past and involve setting Viking longships on fire.

If you’ve ever, like me, dreamt of time travelling and wondered what it would be like to slip through time just for a day or so, now is your chance. Pack your warmest attire and a torch light, and jump on a plane or ferry to Shetland where a wild, 24-hour partying marathon awaits!

Learn more about Shetland’s Nordic heritage, the islands’ fascinating history and the sheer variety of the region’s archaeological sites.

Stunning gardens to explore during the Scottish Summer Garden Festival