The glen was hoaching with lush, green grass and the coos loved to eat it. Every day, from sunrise to sunset, they munched and scoffed it down like big hairy hoovers.

They were greedy coos and soon they’d eaten every last blade of grass. The once-lush glen was bare and barren.

But they were still hungry. 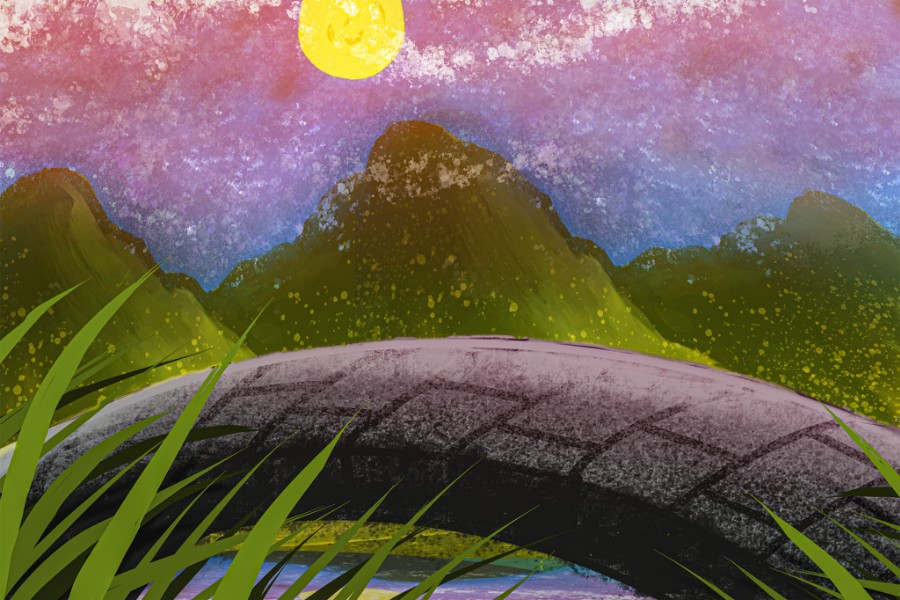 On the other side of the loch, they could see a field that was full of long green grass, gently swaying in the breeze. The coos’ mouths were watering at the thought of so much scrumptious scran.

But there was only one way to get to it – over the crumbling cobbles of an ancient stone bridge at the edge of the loch.

And in the deep, dark depths of the loch lived a terrifically terrifying Kelpie. She was always hungry too and there was nothing she liked to eat more than a nice juicy Heilan coo.

Wee Heilan Coo was the first to reach the bridge. Blowing her fringe from her eyes, she gingerly put one hoof then the next on the cold cobbles of the bridge. 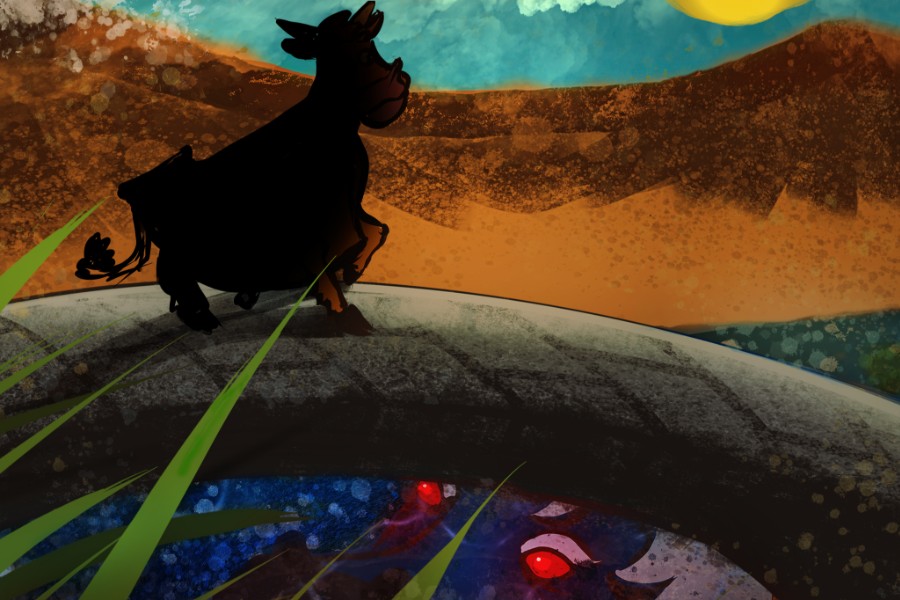 But however slowly she walked and however lightly she trod, her hoofsteps still echoed through the empty glen.

Suddenly there was a booming voice from beneath the bridge.

“Such a gallus wee coo to make such a big racket.”

The Kelpie rose from the water, her black coat slick with seaweed, her eyes burning red, and her teeth bared like daggers. She towered over Wee Heilan Coo.

Quaking in her hooves, Wee Heilan Coo managed to squeak, “I’m sorry – I wasn’t trying to make a racket; I was only going to find some grass to eat on the other side of the loch.”

The Kelpie laughed. “Wheesht, wee coo. I’m hungry too – and I’m going to have you for my supper!”

“Oh, no!” Wee Heilan Coo cried. “I’m only wee; why don’t you wait for my brother? He’s much bigger than me and much tastier.”

After a moment, the greedy Kelpie sank back beneath the water to wait for a bigger meal and Wee Heilan Coo galloped over the bridge to the fresh green grass beyond.

The other coos saw Wee Heilan Coo munching the grass and felt their stomachs rumbling and their mouths watering. They wanted to scoff the grass too.

Middling Heilan Coo made his way down to the bridge and began to cross. His average-sized hooves clipped and clopped across the cobbles and echoed through the glen like thunder.

“Such a gallus coo to make such a big racket,” roared the Kelpie as she rose from the water.

Middling Heilan Coo skidded to a stop in front of the yawning mouth of the colossal Kelpie. 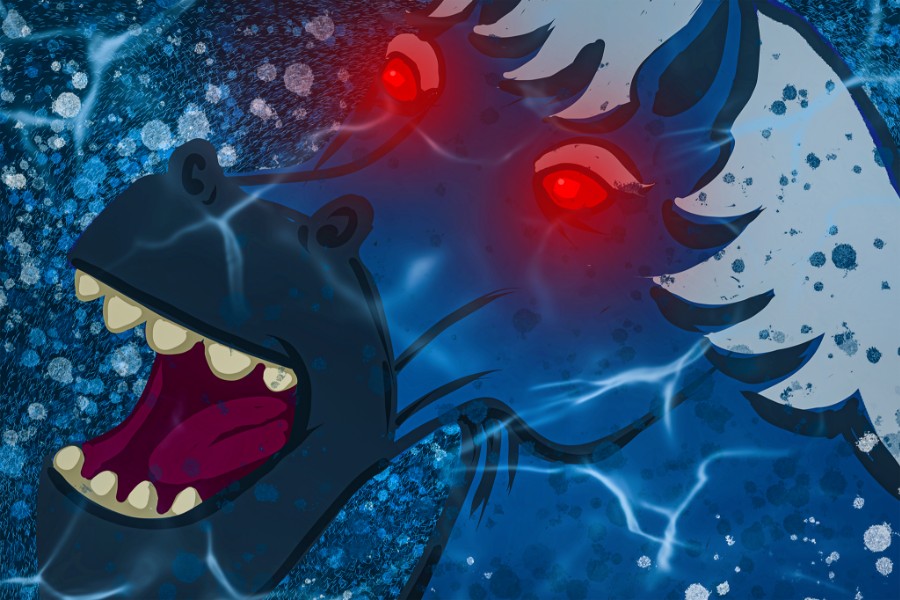 “I’m just following my wee sister,” said Middling Heilan Coo softly, “so I can eat the grass on the other side of the loch.”

The Kelpie snorted. “Wheesht, coo. I’m hungry too – and I’m going to have you for my supper!”

“Oh no, you wouldn’t want to eat me,” said Middling Heilan Coo. “I’m not big enough to fill you up. Wait until my big brother comes along – he’ll make a meal fit for a braw big beastie like you.”

The Kelpie thought for a moment then, licking her lips, slinked back beneath the water.

Breathing a sigh of relief, Middling Heilan Coo scampered over the bridge and began to munch the green grass with Wee Heilan Coo.

Muckle Heilan Coo couldn’t wait to get across the bridge to join his brother and sister. Holding his horns high, he clopped onto the cobbles.

Muckle Heilan Coo’s huge hooves pounded on the bridge, the noise booming through the quiet glen.

The Kelpie rose from the loch in a flash, spraying Muckle Heilan Coo with water.

“Such a gallus big coo to make such a big racket,” she roared.

The Kelpie’s smile was horrible. “I’m the Kelpie of this loch, big coo, and a hungry one, too. I’ve been waiting for you and now I’m going to eat you for my supper!” 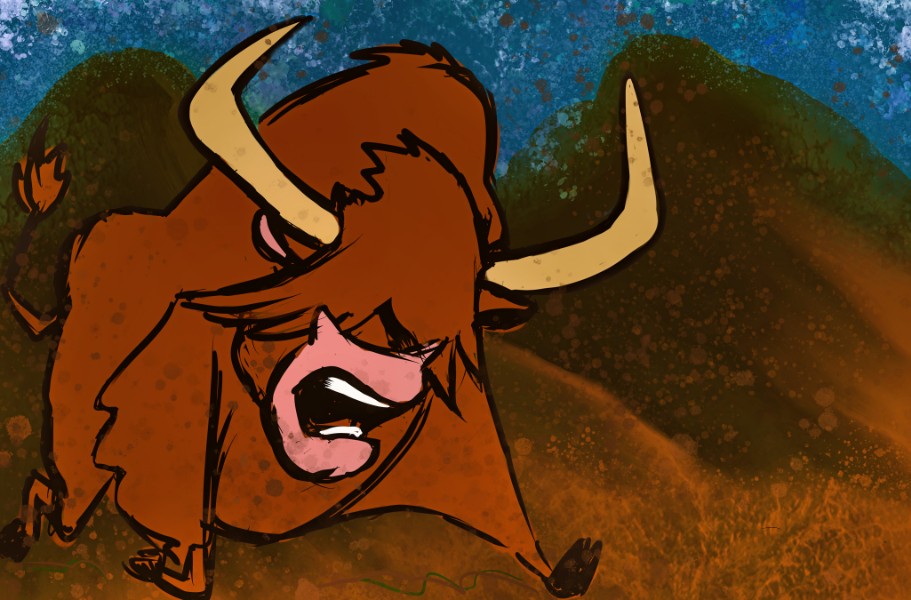 The Kelpie leapt onto the bridge and galloped at Muckle Heilan Coo, who bent his head and charged back.

They met in the middle of the bridge, where Muckle Heilan Coo caught the Kelpie in his horns. As she roared and thrashed, he threw her from the bridge into the deep, dark water of the loch below. 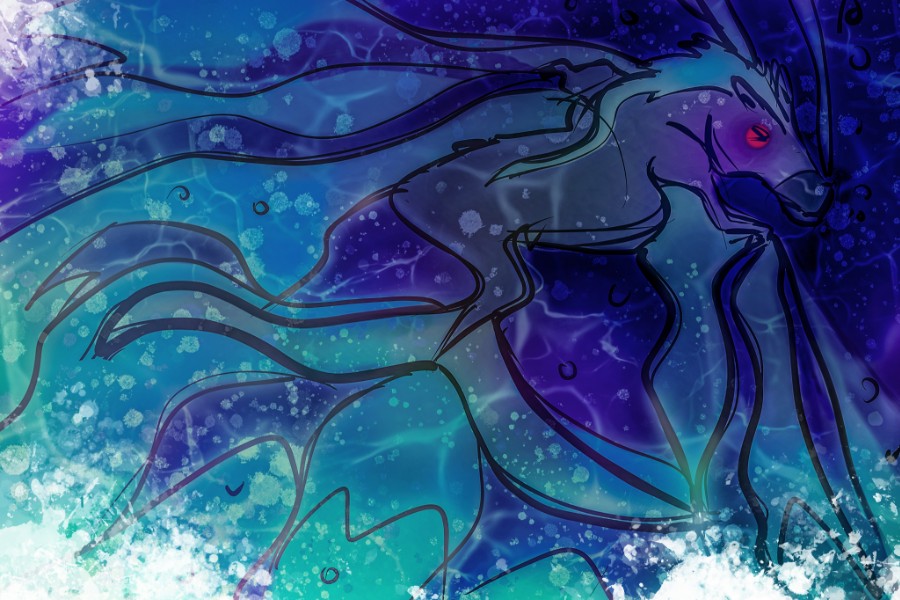 The Kelpie disappeared in a huge splash and, her pride and body wounded, was never seen again.

Muckle Heilan Coo shook the seaweed from his horns, held his head high, and made his way across the bridge to join his brother and sister.

The glen was hoaching with lush, green grass and, from sunrise to sunset, they munched and scoffed it down like big hairy hoovers. But the coos had learned their lesson and, after the first day, ate only what they needed.

The three canny Heilan coos lived happily ever after, savouring the sweet greenery of the bonny glen but always keeping a watchful eye on the deep, dark water of the loch…

Explore more entertaining things to do at home: Experience Scottish Culture, Must-Read Books About Scotland, Great Things to Listen to at Home, and Brilliant Independent Bookshops in Scotland.

Find more ways to Bring Scotland to You at Home. 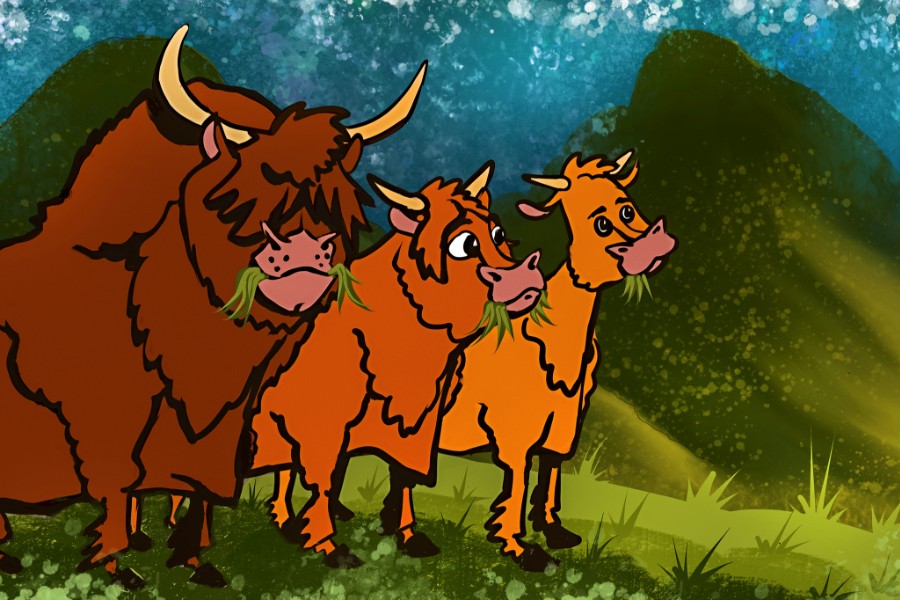