To celebrate Scotland’s many links with children’s literature, we have created Scotland’s Storybook Trail for bookworms of all ages to enjoy. This is an opportunity to move from page to place and trace the footsteps of your favourite childhood stories and authors. Here are some family-friendly ideas to get started!

In light of COVID-19, everyone’s health and safety is the most important thing.

We’d ask everyone who is considering future day trips and overnight stays to please plan ahead carefully and check opening arrangements with the businesses directly.

Find out more about the current Covid-19 restrictions and future phases. 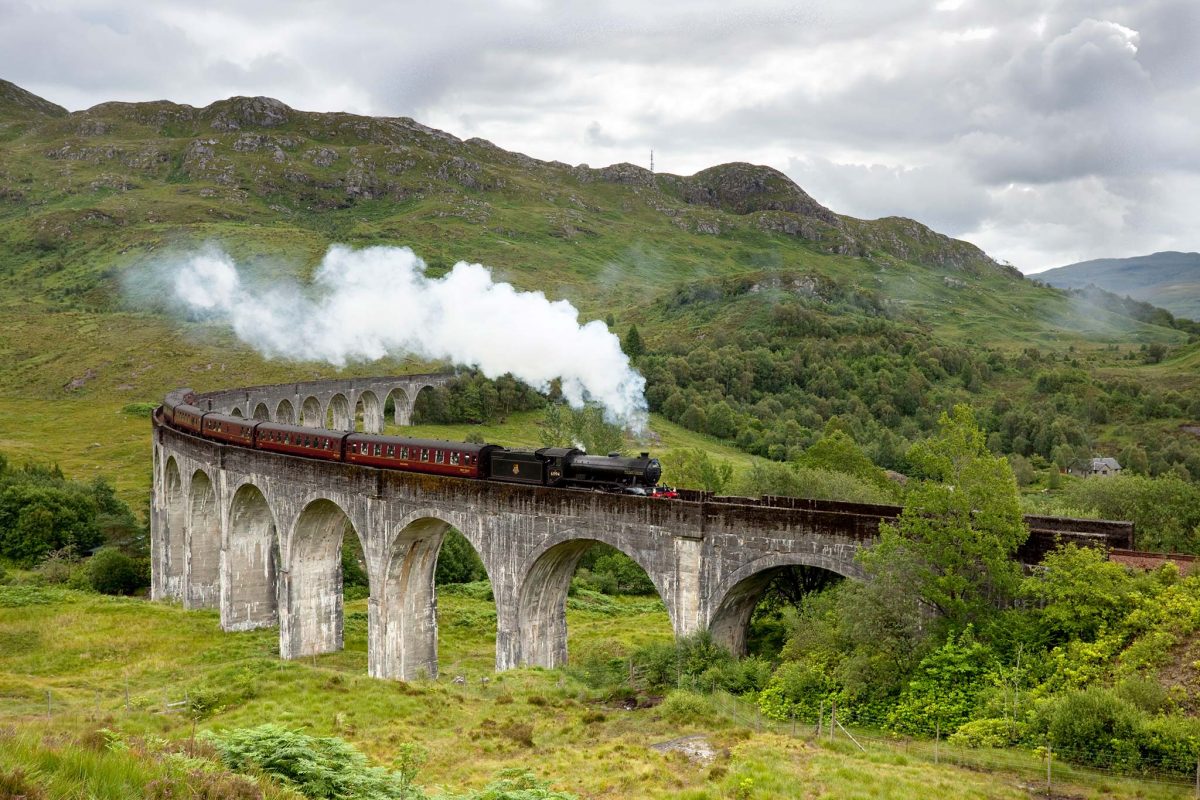 The Jacobite Steam Train passing over the Glenfinnan Viaduct, Highlands.

Grab your wands and prepare for a magical adventure!

Edinburgh has become synonymous with J. K. Rowling’s Harry Potter book series. Explore the city for yourself or take a guided tour to find out how Edinburgh’s buildings and people inspired J. K. Rowling to write about a boy wizard. Travel out of Edinburgh and visit some of Hedwig’s feathered friends at the Scottish Owl Centre at Polkemmet Country Park, West Lothian. Fans of the movies based on the books will want to take a trip to The Highlands to hop aboard a real life version of the Hogwarts Express, The Jacobite Steam Train, and travel across the Glenfinnan Viaduct. For more wonderfully wizardry ideas check out our Harry Potter Film and Book Locations Itinerary.

If you are intrigued by stories of sprites and pixies, then take a trip to Archerfield Walled Garden in East Lothian to explore the fairy trail. Sprinkle the magic dust and see what magic appears. There are more opportunities to feed the imagination and see the carved wooden fairy homes at Levengrove Park, Dumbarton and Balloch Castle Country Park near Loch Lomond.

Described as Scotland in miniature, the Isle of Arran is the home of A. H. Proctor’s magical adventures of a little witch, Thumble Tumble. Visit Brodick Castle, Garden & Country Park and Lochranza Castle where Thumble Tumble’s first two magical adventures were set.  Make sure you have time to explore the new Isle Be Wild adventure playground at Brodick Castle, suitable for all little wizards and witches! 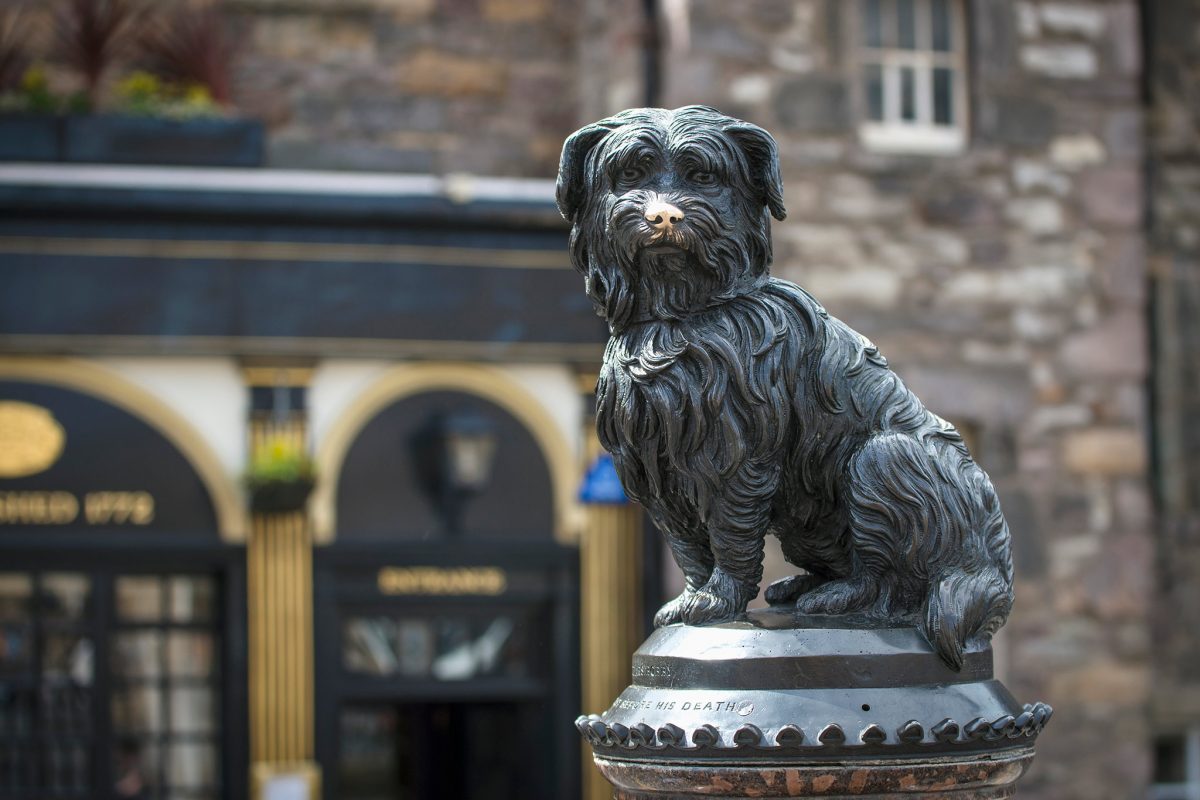 You’ll find a statue of a little dog on Edinburgh’s Candlemaker Row, a lasting tribute to Greyfriars Bobby, the faithful terrier that will always be remembered for guarding his master’s grave in Greyfriars Kirkyard. This story of devotion inspired Eleanor Stackhouse Atkinson to write her best selling-book, Greyfriars Bobby. Today visitors still come to the Kirkyard to pay tribute to the world’s most famous Skye Terrier. To find out more visit The Museum of Edinburgh where you can see his collar and dish on display.

From Edinburgh’s most famous dog to a cat, called Maisie Mckenzie. Created by Aileen Paterson, Maisie the mischievous kitten lived in the Morningside area of the city. Explore the city as Maisie did including a visit the Royal Botanic Garden Edinburgh and other attractions featured in the book series. 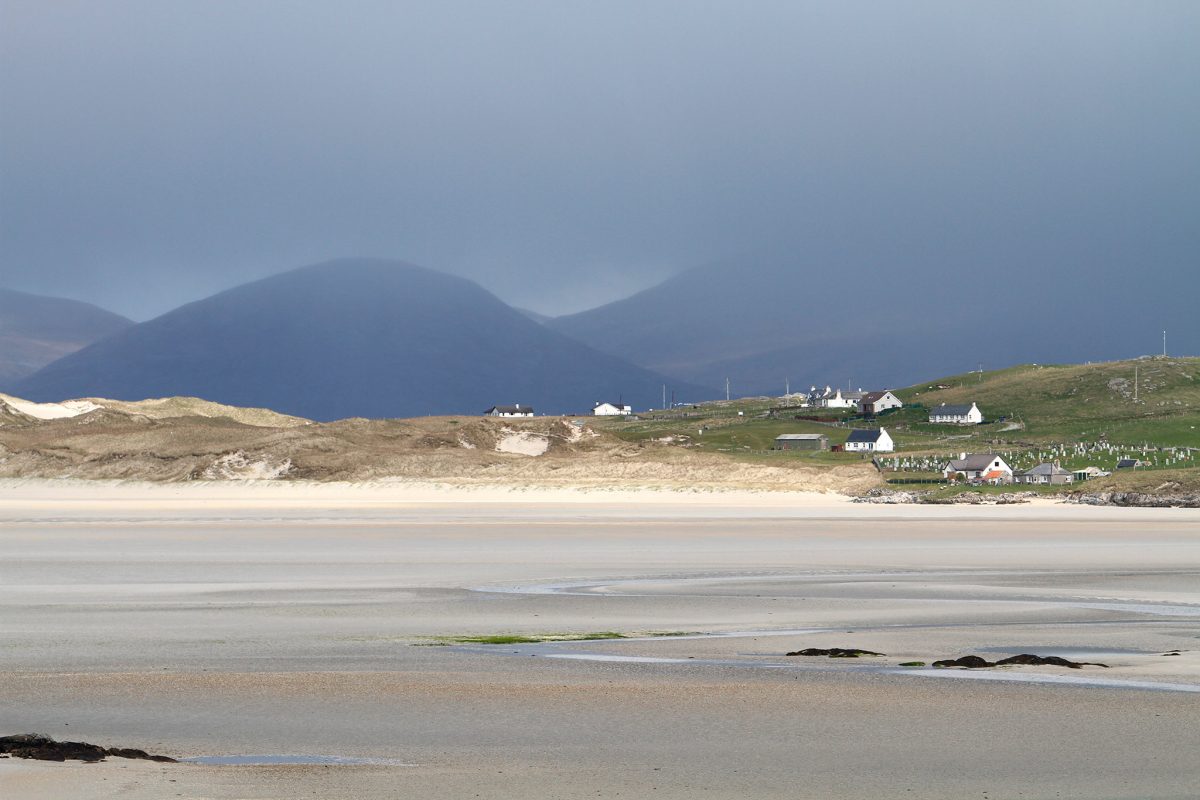 Luskentyre on the Isle of Harris, Outer Hebrides.

Kenneth Grahame, creator of The Wind in the Willows was born in Edinburgh and spent some of his childhood near the Crinan Canal in Argyll. Explore the area that may have been the inspirational start of the adventures of Ratty, Mole, Badger and Mr Toad.

If you love the stories of Beatrix Potter then visit the Beatrix Potter Exhibition Garden at Birnam Arts, in Perthshire. Discover how Potter became interested in drawing the local nature and how it inspired her stories, including The Tale of Peter Rabbit. Some of Beatrix Potter’s fungi drawings can also be seen at the Perth Museum and Art Gallery. And, if you are travelling to Dumfries & Galloway don’t miss the chance to follow the Laggan Peter Rabbit Trail near Castle Douglas.

Take a trip to Moray Speyside and see if you can spot the birds featured in The Book of the Howlat, inspired by a poem written in Moray in the 15th century. The book tells the tale of a wee owl (or howlat in old Scots) who wants to be beautiful. Moray Speyside is a great area for wildlife, you might even spy a real-life howlat hiding in a tree.

Journey to the Outer Hebrides to experience for yourself the beautiful setting for The Island and the Bear by Louise Greig. You might not find a bear, but look out for other wildlife, including wild ponies, seals and red deer, plus wonderful beaches and ancient history.

Kathleen Fidler’s classic tale of Haki the Shetland Pony is a must read for any pony lovers. Visit Shetland and see these world famous small ponies for yourself. Take time to explore the history, food, wildlife and culture that the Shetland Isles have to offer.

…and a friendly monster or two 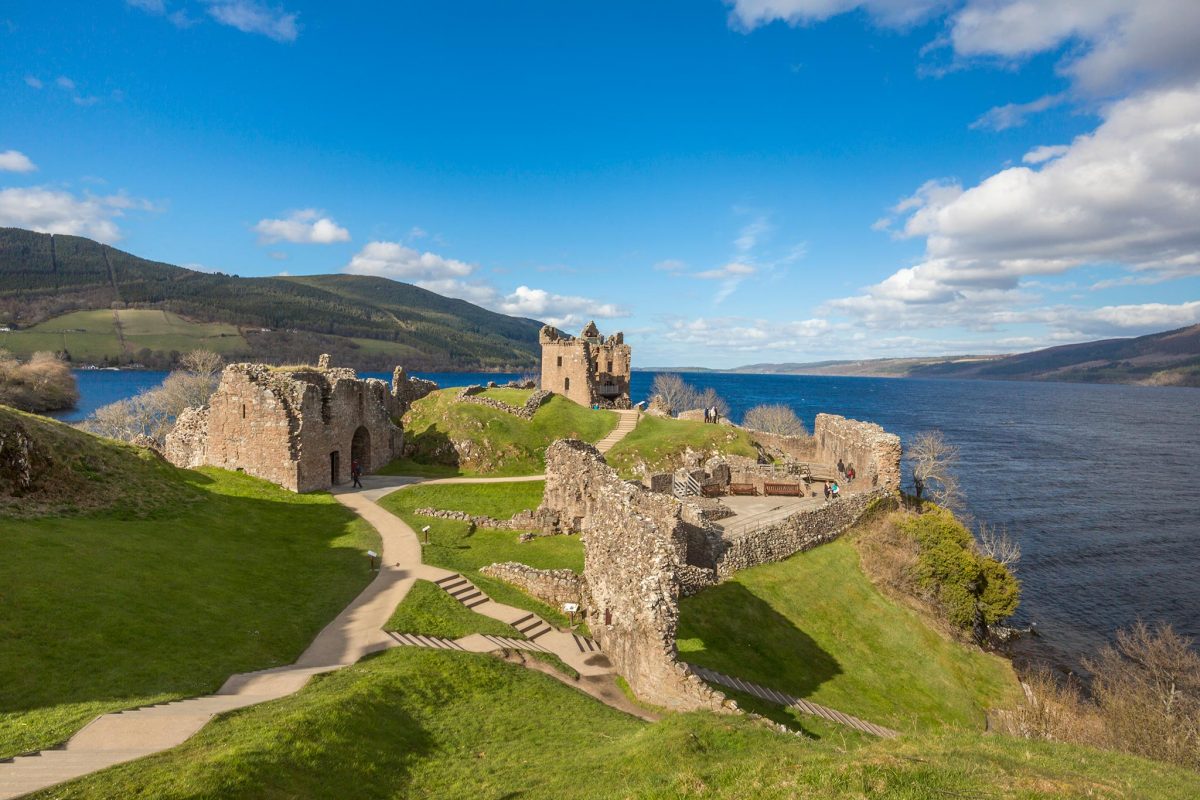 If you are looking for monsters, then here are two of the friendly kind.

Take a stroll through the deep dark woods on the Gruffalo Trail at Ardkinglas Estate, Argyll. Look out for the Mouse who will help guide you along the way and the boards with extracts of Julia Donaldson’s story translated into Scots.

What lurks in Scotland’s deepest loch? No one really knows but the story of the Loch Ness Monster undoubtedly inspired Dick King-Smith to write about the mysterious creature The Water Horse. Take a boat trip on Loch Ness, visit Urquhart Castle and keep an eye out for anything swimming in the dark waters. 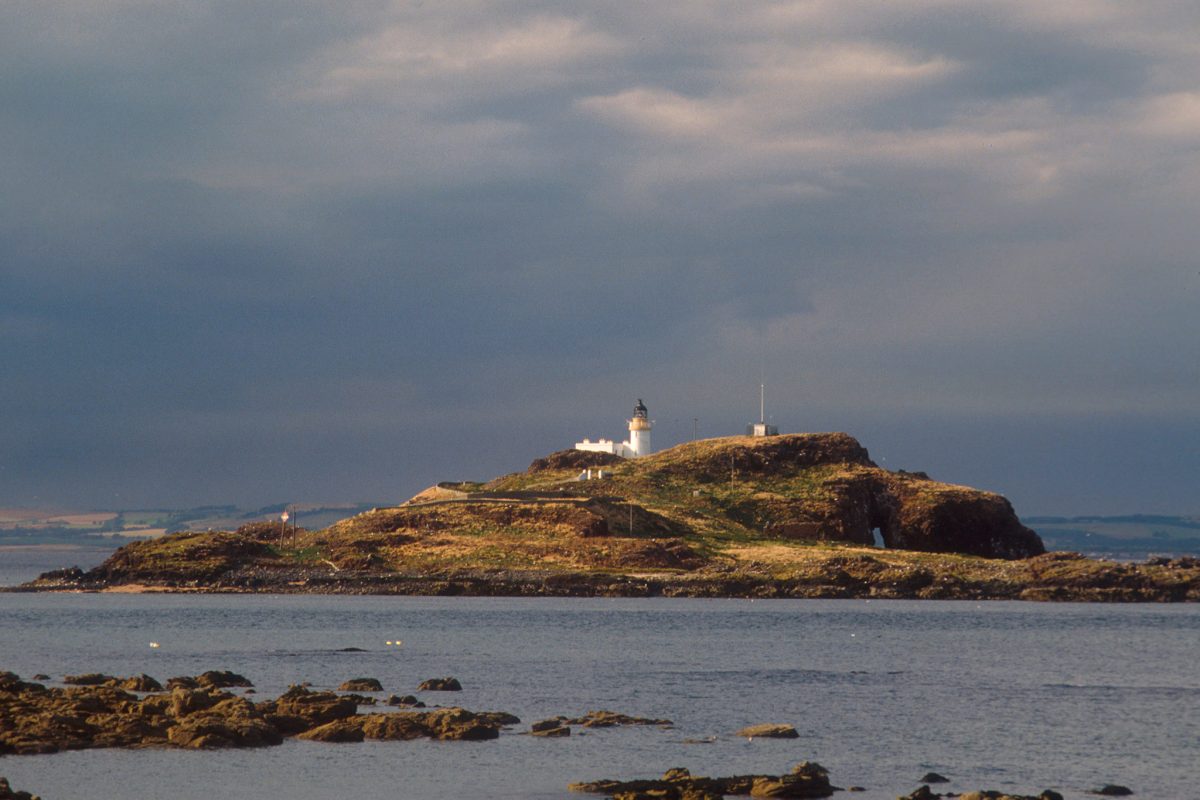 Robert Louis Stevenson started to write his swashbuckling adventure Treasure Island during a stay in Braemar in Aberdeenshire. It’s thought he even based some of the characters on people he met in the village. Treasure Island is also rumoured to have been inspired by Fidra Island in East Lothian, which the writer would have spied from the beaches at Yellowcraig during childhood holidays to the area. Today, rather than pirates, you are more likely to find puffins and other seabirds as the island is an RSPB nature reserve. To find out more about Robert Louis Stevenson visit the Writers Museum in Edinburgh where you can see many of his personal possessions and treasures for his travels.

Make sure you have your pixie dust at the ready as you head off on an awfully big adventure in search of Peter Pan. Visit Kirriemuir in Angus where you can see a statue of ‘The Boy Who Never Grew Up’ in the town centre. You can also visit JM Barrie’s Birthplace where he spent his early childhood.

Soon to open as the new National Centre for Children’s Literature and Storytelling, Moat Brae in Dumfries  is where Barrie moved to from his birthplace. Moat Brae is said to have inspired Neverland, the enchanted faraway place where Peter Pan and the Lost Boys outwit Captain Hook. Be sure to visit Dumfries later this year and join in the three day Dreams for the Future festival of events. Inspired by the story of Peter Pan, events will take place at Moat Brae and across the town from Friday 30 November to Sunday 2 December 2018.

Characters for all ages 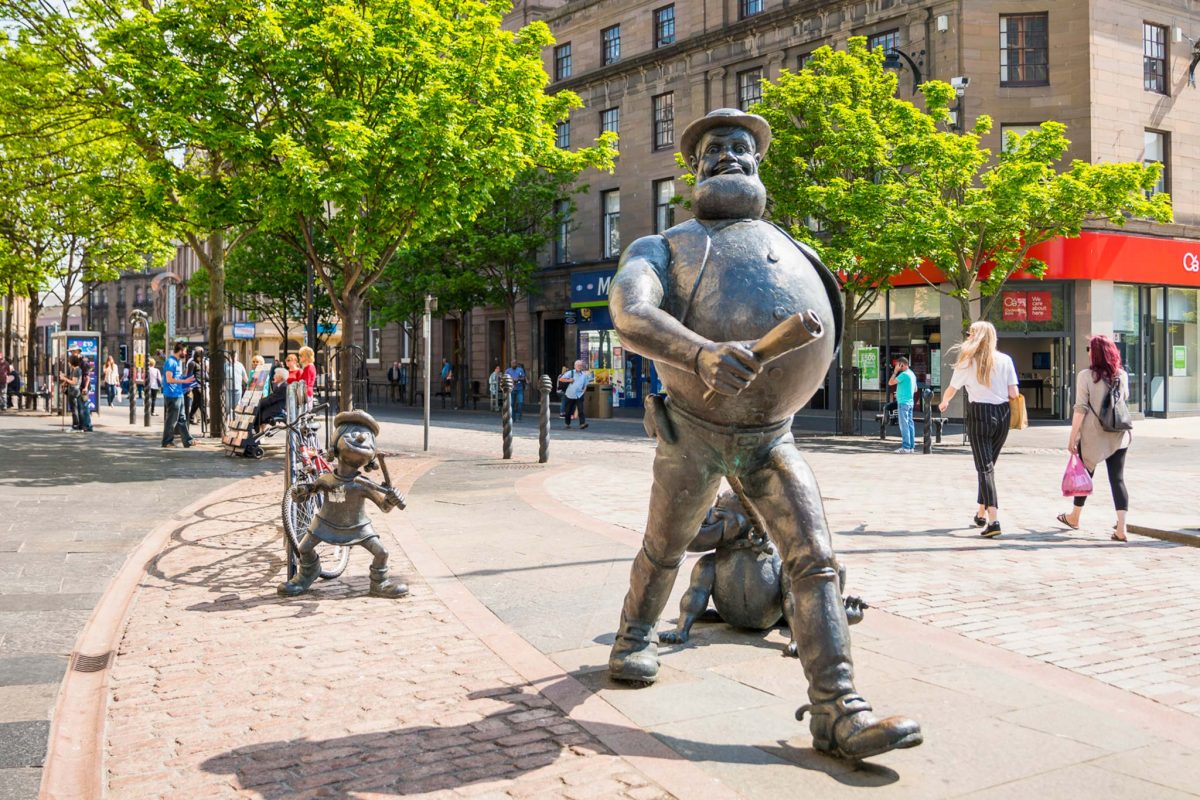 Desperate Dan and Minnie the Mix in Dundee city centre.

For cartoon fans, Dundee is definitely the place to go. The antics of Dennis the Menace and his friends in the Beano and everybody’s favourite wee laddie, Oor Wullie have been published every week for decades by DC Thomson, based in Dundee.  Take a walk around the city centre and look out for statues of fellow DC Thomson legends, Desperate Dan and Minnie the Minx, as well as Oor Wullie. Be sure to grab a selfie on Bash Street while you’re there.

Also don’t miss the chance see ‘Bash Street’s Back at The McMenace’ at the McManus, Dundee’s Art Gallery and Museum, which celebrates the 80th birthday of Beano. Packed full of memorabilia, stories and fun the exhibition runs until 21 October 2018.

From the bustle of the city to the peace and tranquillity of the Isle of Coll in Argyll & The Isles. This small island was the inspiration for Mairi Hedderwick’s Katie Morag and her home, the Isle of Struay. Take a picnic to the beach, explore the island’s only village, Arinagour and keep an eye out for the whitewashed cottages that look just like the illustrations in the books.

Take a trip to Orkney and discover the setting for The Boy with the Bronze Axe. Set in the Skara Brae Prehistoric Village, Kathleen Fidler’s story brings to the page what life might have been like at the Orkney settlement nearly 3,000 years ago. Visit for yourself and explore this prehistoric village and see ancient homes fitted with stone beds, dressers and seats.

a feast for book worms 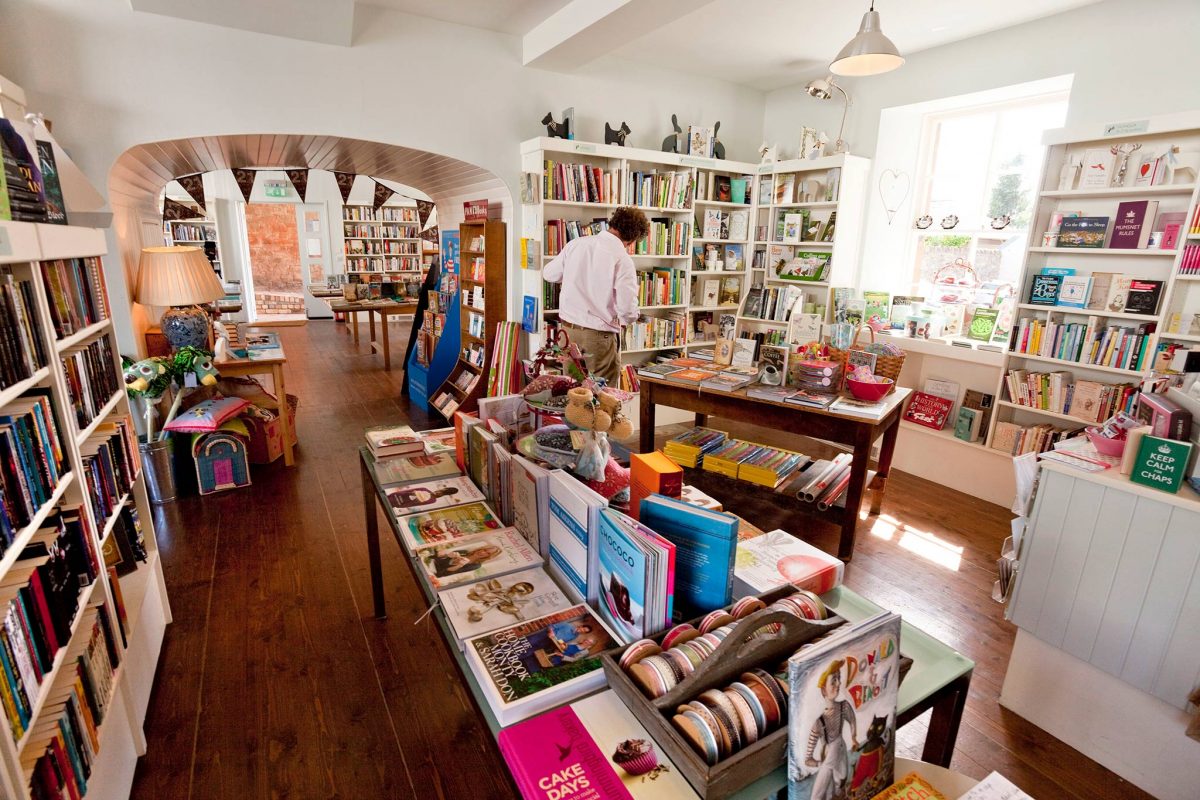 Scotland is rich with literature and has produced many great writers and inspired others.

Edinburgh was named the world’s first UNESCO City of Literature. It also annually hosts the world’s largest public celebration of the written word at the Edinburgh International Book Festival. You can also visit many literary attractions including the Scottish Writers Museum and the National Library of Scotland. The Museum of Childhood also has an exhibition ‘Growing up with Books’ until 9 December 2018.

No bookworm’s trip to Scotland would be complete without a visit to Wigtown in Dumfries & Galloway. Wigtown is Scotland’s National Book Town and holds an annual Book Festival every September, as well having many bookshops to delve into.

There are also plenty of Scottish independent bookshops and other venues to find as you tour the country including The Mainstreet Trading Company ,in the Scottish Borders and the impressive Mitchell Library in Glasgow.

So, go and explore, book in hand, and see where your next adventure will take you.

For more ideas check out our page on Family Holidays and Breaks in Scotland.