Fish and chips or a fish supper is a deep-fried culinary classic that goes back hundreds of years. There is some debate about when the UK’s first fish and chip shop opened, but it was certainly in Victorian times – some say the Industrial Revolution was fuelled by fish and chips.

By the early 20th century there were thousands of ‘chippies’. George Orwell wrote in The Road to Wigan Pier (1937) that fish and chips helped keep the masses happy and ‘averted revolution’ during WWI. And fish and chips were one of the few foods that were not rationed during WWII – a boost to the nation’s morale.

These days, fish and chip shops will deep-fry almost anything for you, including haggis, black pudding, pizza, and infamously, chocolate bars. A trip to the chip shop is usually considered a treat, often to be enjoyed by the seafront after a great day out – just watch out for marauding seagulls!

For many, eating a fish supper is a nostalgic experience. 50 years ago, a modest 25p would net you a portion, neatly wrapped in yesterday’s newspapers; but times have changed and today you can expect to pay between £6 – £10.

Finding your favourite chip shop, of course, is a subjective thing, so to help you decide, here are sixteen to choose from.

The most northerly fish and chip shop in Scotland, Frankie’s sources premium and sustainable Shetland seafood that delights locals and visitors alike. Build up your appetite with a short walk to Isleburgh chambered cairn or on a bracing walk along the dramatic cliffs at Eshaness before driving to Frankie’s in the village of Brae. Later on, if conditions are right, you might even be able to catch the Northern Lights.

Fochabers Fish Bar is a family run traditional fish and chip shop serving the local community of Fochabers and surrounding areas. They deliver the highest quality food cooked fresh to order, using only the finest produce available throughout the year. Winners of the Best Fish and Chip Shop in Scotland 2017, Fochabers Fish Bar is the perfect place to stop for dinner if you are visiting Moray Speyside.

The National Fish and Chips Awards are the fish-frying equivalent of The Oscars and in 2019 Quayside Restaurant & Fish Bar was nominated for two awards. They say the secret to their success is using the freshest ingredients available – ‘top-of-the-shop’ fish is the last fish to come to market so it’s the freshest. Twice-cooked beef dripping chips add to the experience. Quayside took home a Best Seafood Week Campaign Award and narrowly missed out on being named best chippy in the UK.

4. The Chippy, Portree, Isle of Skye 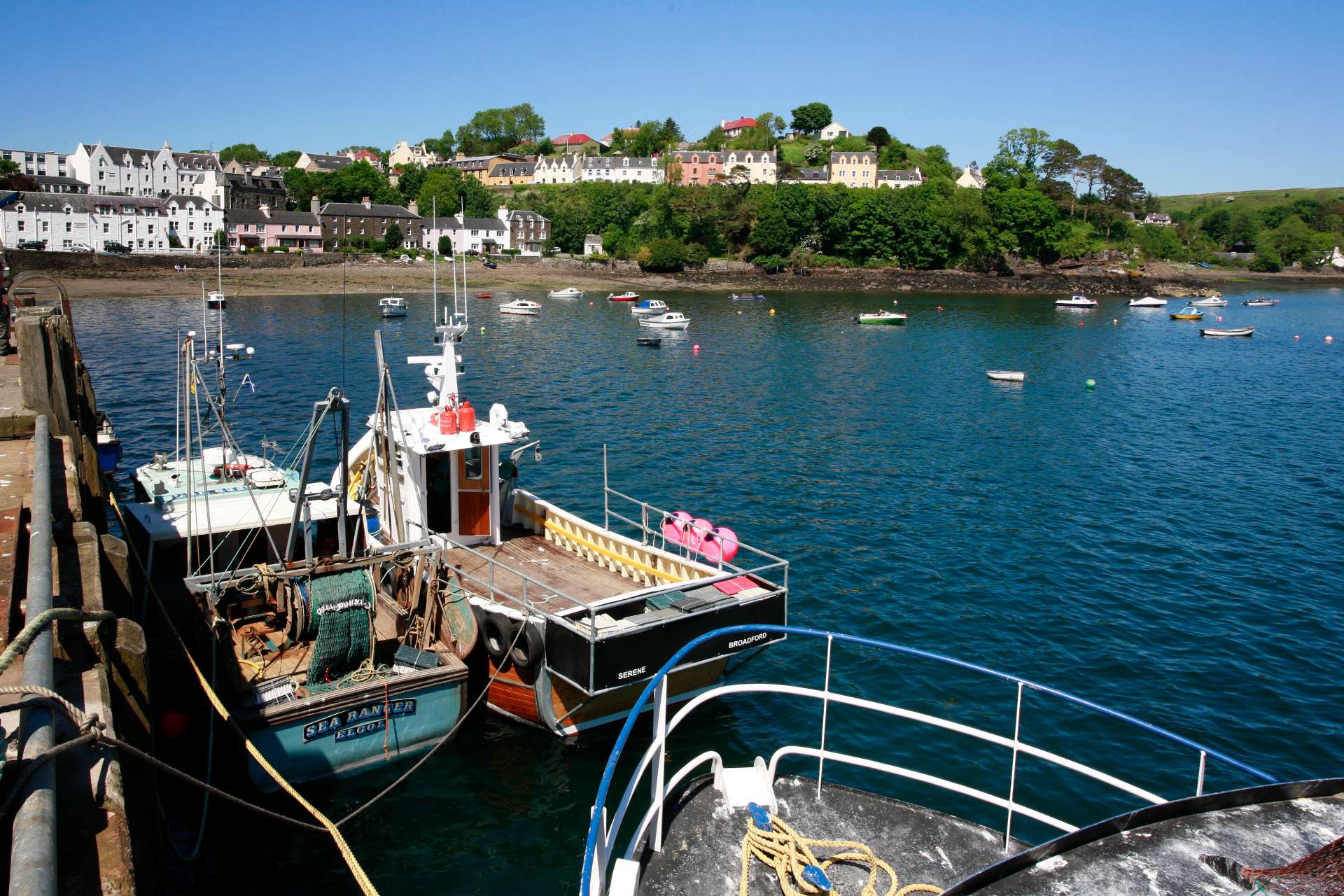 If you are visiting Portree, on the Isle of Skye, and you feel the need for some comfort food then The Chippy is the place for you. Whether you fancy fish and chips drenched in salt and vinegar, or a cheeky Scotch pie, you won’t be disappointed! Find out more about what you can see and do on Skye. 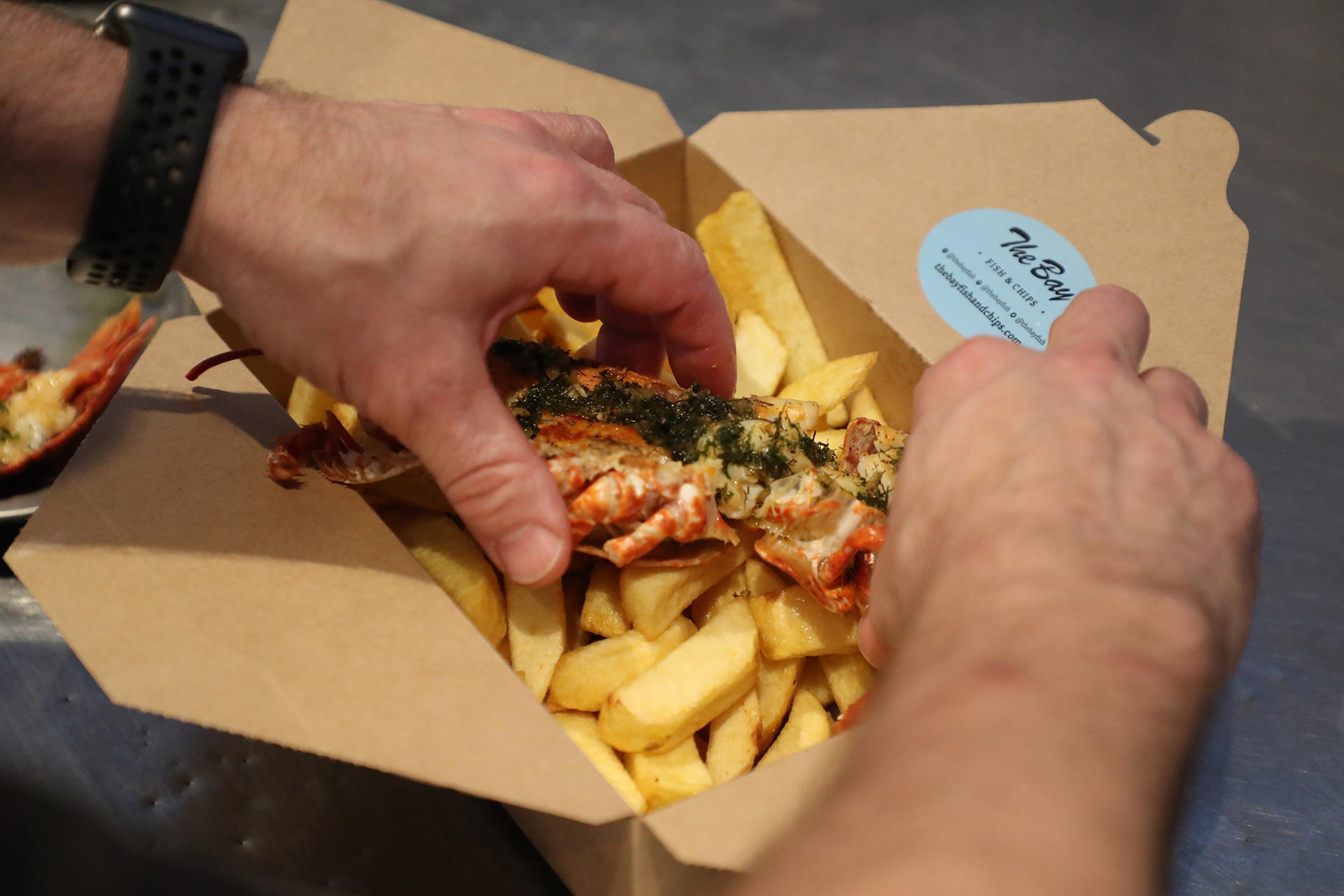 This award-winning fish and chip shop on Stonehaven’s seafront has put the town on the Scottish food map. With a focus on local food and sustainable produce, The Bay is looking after the future of our fish and chips. If you’re looking for something a little different, try The Bay’s fishcakes. They won Best New Foodservice Product at the prestigious North East Scotland Food & Drink Awards. If you’re planning on visiting Aberdeenshire take a look at our Aberdeenshire Coastal Trail itinerary which stops in at Stonehaven or combine your trip with a walk from Stonehaven to nearby Dunnottar Castle. 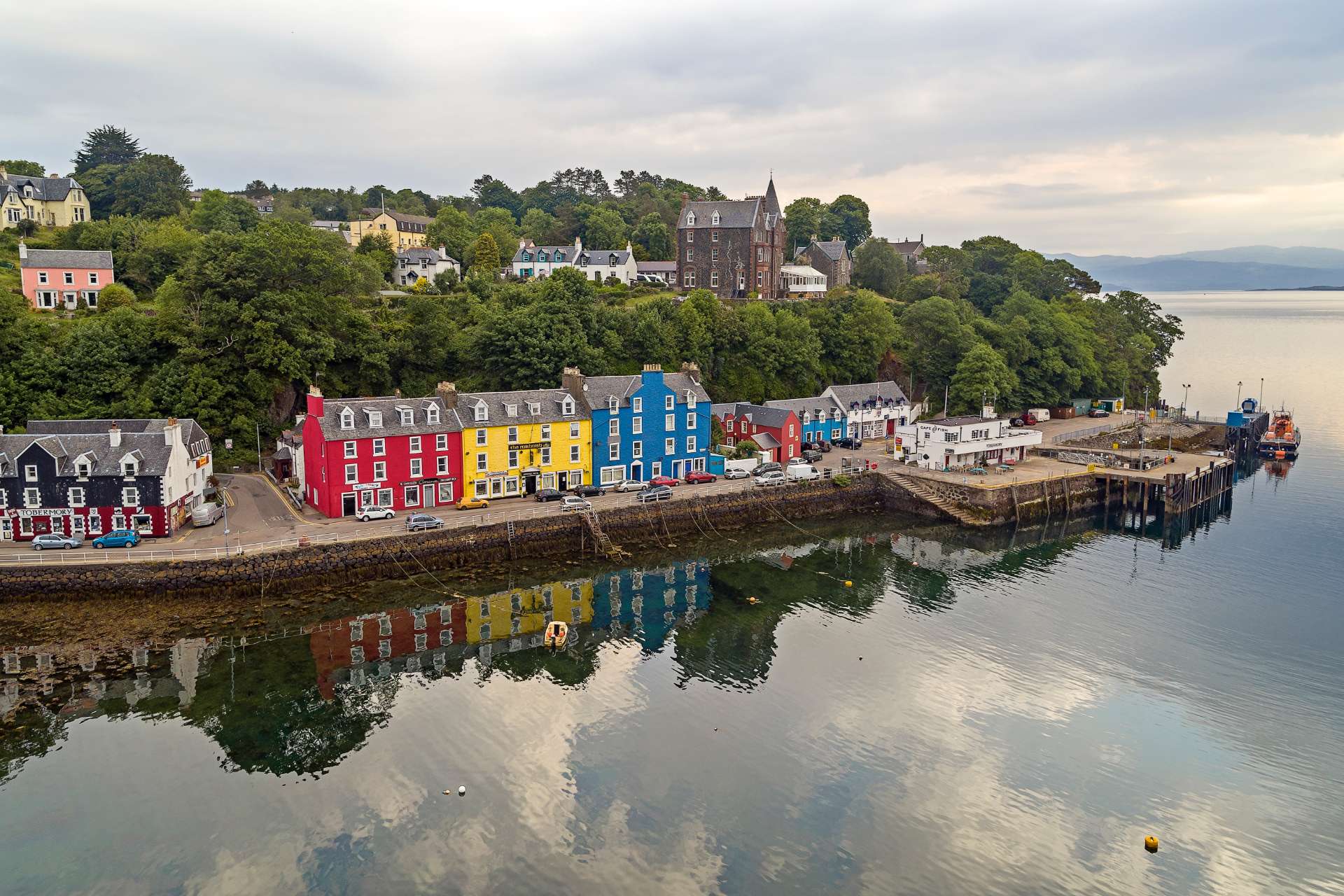 The long-established Fish & Chip Van on the Fisherman’s Pier in colourful Tobermory is owned by Jeanette and Jane. The ladies use only the best quality seafood which is supplied daily. Everything on the menu is cooked to order including specialities like fresh king scallops. The Fish & Chip Van attracts customers from all over the world, including Prince Charles, who gave the van his Royal seal of approval on a visit to Tobermory. Tobermory Distillery is just a two minute walk away too.

Now we move to Oban on our quest for the best fish and chips. The Oban Fish & Chip shop is a family-run business based in the town centre, recommended by none other than Rick Stein. There is always an inviting atmosphere in the restaurant with families, couples, locals and holiday makers all coming to eat the delicious food on offer. As well as enjoying a fine fish supper, you can try other specialities such as locally caught squat lobsters, house fish pie and salt and pepper squid.

A post shared by The Real Food Cafe (@therealfoodcafe)

The Real Food Cafe is situated on the main A82 at Tyndrum approximately half way between Glasgow and Fort William and right by the West Highland Way, which makes it an ideal stopping off point to eat, drink and rest if you are travelling in this part of Scotland. The café has won several awards and is a member of the MSC Chain of Custody which means their fish is fully traceable and sustainably sourced from MSC registered vessels. 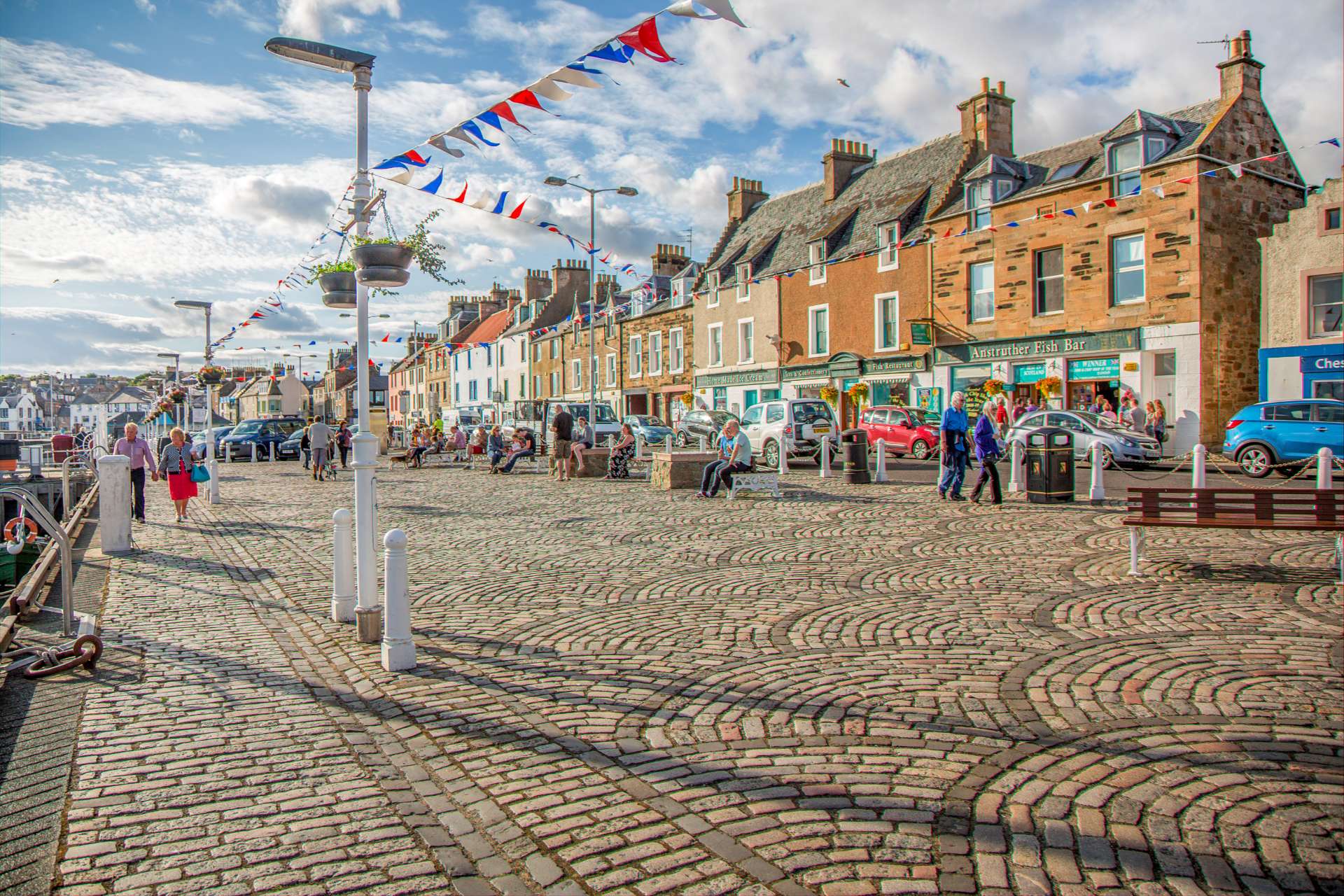 Anstruther Fish Bar is the first of our Fife offerings, something of a mecca for fish and chips. This hallowed chippy has too many awards to list, but highlights include UK Fish and Chip Shop of The Year 2009 and multiple VisitScotland Taste Our Best awards. From traditional haddock in batter to dressed Scottish crab and lemon sole in breadcrumbs, you’ll find lots on offer in Anstruther.

While most visitors to Fife will head for the Anstruther Fish Bar, the fish and chip illuminati will walk from the harbour to visit Pittenweem’s Fish & Chip Bar – another local favourite with a great reputation. Like many chippies on this list, its exterior may be modest in appearance, but the food is outstanding, and it’s likely you’ll have to queue on busy nights. It’s hard to choose where to go for fish and chips in the East Neuk, but if you find yourself in Pittenweem then you know what to do!

The Fife rivalry continues as we head to Cromars in St Andrews. Cromars was established in 2013 and has become a firm favourite with both locals and visitors. There’s a restaurant and a takeaway here so you can choose how you want to eat your fish and chips. And the menu doesn’t stop there – other options include fresh chicken goujons, homemade mac and cheese and a classic chippy king rib. It’s the ideal stop if you’re hungry after a round of golf or a bracing walk along West Sands.

With two locations in Scotland, Tailend is popular with golfers, visitors, students and locals in St Andrews and Dundee. An award-winning seafood restaurant with casual dining, they also offer event nights like champagne and lobster evenings. The restaurants are owned by G&A Spink Fish Merchants of Arbroath, so don’t be surprised if you see another famous Scottish delicacy on the menu – Arbroath smokies.

There are plenty of great places to pick up fresh fish and chips in the Scottish Borders but this Eyemouth institution is one of the best. Winner of multiple awards, Giacopazzi’s is famous for great fish and chips and incredible ice cream. Highlights of Eyemouth’s calendar include the Herring Queen Festival in July and the Lifeboat Weekend in August. The popular Berwickshire Coastal Path passes through Eyemouth en-route from Berwick to St Abbs.

The Fishmarket is the new kid on the block in Edinburgh, offering delicious fish and chips in a traditional seaside setting. From takeaway fish and chips cooked to order, to oysters served at your table with a chilled glass of white wine, to sitting on the deck with langoustines and a local beer watching the sun set over the harbour, this place is getting some rave reviews. Recently featured on a Tom Kerridge TV show, The Fishmarket is going from strength to strength.

This casual but stylish takeaway group is bringing fresh seafood to the streets of Glasgow. You’ll find Catch at three locations in the city, Giffnock, Netherlee and the West End. Describing themselves as a ‘posh modern day neighbourhood fish & chip shop’, it’s not only haddock and chips you can order here. Expect lobster, halibut, langoustine tails and old-fashioned fish finger butties if you’re feeling adventurous.

You’ll find The Fish Works on the promenade in Largs, with exquisite views of the west coast of Scotland including the islands of Cumbrae, Arran and Bute. Their ethos is to give customers fresh food, handmade and expertly cooked in the best traditional way. The Fish Works is also dedicated to sustainability, using biodegradable packaging, paper bags and wooden forks.

These are just a few of the excellent fish and chip shops around Scotland. Why not have your say and tell us about your favourite on our best fish and chips in Scotland thread or in the comments section below?

Get out of the Kitchin and try Tom’s favourite restaurants