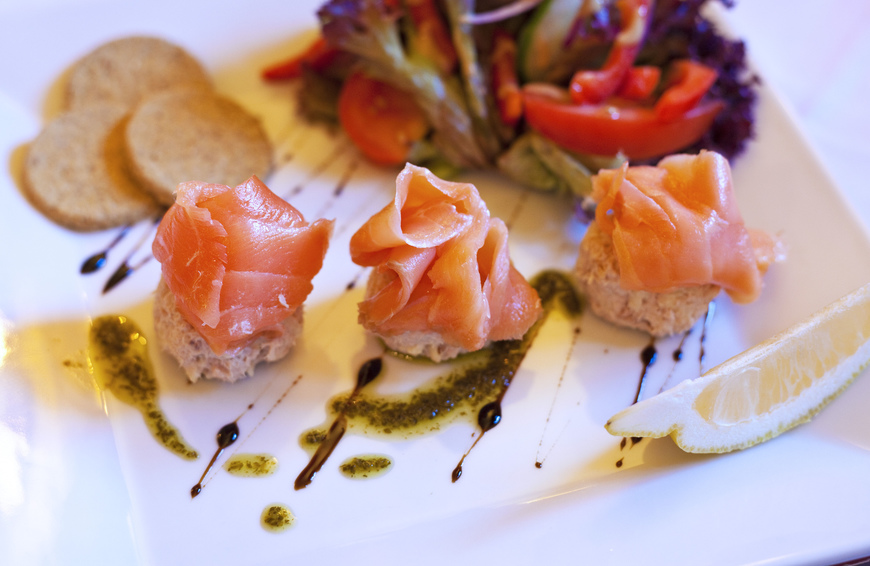 Want to know what to eat in Scotland? If you love drooling over pictures of mouthwatering food, there is simply no other better medium than Instagram. Feast your eyes on these tantalising images of the very best Scottish food and start planning your edible adventures.

Nourishing and oh-so-satisfying, haggis neeps n’tatties is a Scottish staple and usually tops the list of  Scottish foods. Think of haggis as pudding of oats, minced meats and spices. Traditionally concocted from sheep’s heart, liver, and lungs, the recipe is usually infused with minced onions and suet  before cooking. There are as many variations of haggis as there are palettes, but is universally agreed that this is a dish best enjoyed with a generous side helping of mashed turnip (‘neeps’), potato (‘tatties’), and a dram of the finest single malt.

Interested in Scotland’s other traditional foods? Find the answers with our Frequently Asked Questions about Scottish food and drink.

Nothing sets you up for the day or restores after a lively night out like a full Scottish breakfast. What sets it apart from a full English? The answer is black pudding, lorne sausage, and tattie scones. Haggis is sometimes thrown into the mix, as is white pudding which is just like black pudding but made with fat rather than blood.

A relatively new addition to Scottish cuisine, our ‘other’ national dish arrived on Scottish shores in 1888 at the International Exhibition in Glasgow which saw Indian chefs dazzle the locals with an array of exotic flavours, vibrant colours and fragrant spices. It is even claimed that the world-famous Tikka Masala recipe, a delectable dish of yoghurt marinated chargrilled chicken smothered in a spicy orange curry sauce, was invented by the owner of the Shish Mahal restaurant in the west end of Glasgow.

The king of Scottish deserts, Cranachan is traditionally made with crowdie, a soft crumbly Scottish cheese, mixed with cream, oats, a dash of whisky, ripe raspberries and drizzled with honey. Typically served in a glass, it is best described as a Highland twist on the Eton mess, with oats taking the place of the meringue. It is also a lovely alternative – if not improvement – on the trifle.

Next up ..... these Ladies need little introduction - it is @marysmilkbar This Lovely Grassmarket Ice Cream Bar have been causing waves across social media with their inventive Flavours and their EPIC Hot Chocolate Floats that just look too good to eat! They make all their Ice Cream in their little shop.... but they also make a great selection of Homeamde Chocolates too!! edinburghtreatmakers #edinburgh #bakers #icecreamwizards #chocolatiers #sweettreatmakers #edinburghfood #edinburghcake #giveusafollow #aboutbakersbybakers #wemakeeverything #allhomemade #giveusafollow #icecream #marysmilkbar #marysmilkbaredinburgh

With the weather heating up, now is time to indulge in a sweet frozen treat. Luckily, Scotland is home the many traditional ice cream parlours as well as more hipster-style establishments where you can satisfy your cravings. To name a few; family-run chain Nardini’s whose rich and intensely flavoured recipes have remained unchanged since the 1930s, Jannettas Gelateria in St Andrews which employs Italian imported ingredients to create uniquely Scottish flavours including Scotish tablet and Irn-Bru sorbet, and the tiny Mary’s Milk Bar in Edinburgh’s Grassmarket where whisky and ginger, and peanut butter and cinnamon are just some of the weird and wonderful flavour combinations on offer.

It’s Friday and we all know what that means ... it’s our oyster hour !! EVERY FRIDAY.. 5.30 pm to 6.30 pm .. £1.00 a shuck. Come on over the bridge ! #oysters #oysterhour #inverness #visitscotland #visitinverness #fresh #seafood #seafoodheaven #seafoodporn #restaurant #local #scottishoysters

Succulent, nourishing and bursting with rarefied flavour, Scotland’s seafood enjoys a sparkling reputation around the world, especially when it comes to the oysters. Harvested from the waters around west coast, Scottish oysters are in season year round. This is because the temperature of the water rarely rises above 18 degrees Celsius which ensures optimum growing conditions. An imported and sometimes prohibitively expensive delicacy in most other countries, in Scotland freshly shucked oysters are a much more affordable luxury best enjoyed with a chilled glass of dry white wine.

Partial to a bit of wild game? Then Scotland is the place for you. Grouse, wild hare, pheasant, and venison all thrive here thanks to Scotland’s unique climate and terrain, and often form the signature Scottish dishes of  restaurants that pride themselves on serving locally sourced, Scottish fare. Slowly cooked and infused with seasonal ingredients, wild reared meat should be savoured during the autumn and winter months when it is at its most tender and delicious.

If you want to get your hands on more locally sourced as well as organic food and drink, visit one of the farmers’ markets held regularly around the country.

Try our famous fish and chips this weekend! Have it your way; either Breaded, battered or grilled, mushy or garden peas and plenty of chips #lovetailend #lovedundee #dundee2018 #fishandchips #awardwinning #delish #tailenddoesitbetter #tailenddundee #famous #foodies #supportlocal

Here in Scotland we take our fish n’chips very seriously. Fried in golden, crispy batter with thick-cut chips bursting with fluffy potato, the quality of our fish suppers is a point of national pride. Just remember: salt ‘n’ sauce if you’re in Edinburgh, salt ‘n’ vinegar in Glasgow. Head over to our iKnow Community for recommendations on the best fish and chips in Scotland.

The popular The Ubiquitous Chip in Glasgow is just one of the increasing number of Scottish restaurants across the country to offer diners a rich and varied vegan menu. As you’ll soon discover, Scotland’s vegan fare is  inventive, healthy and, most importantly of all, delicious!

Scotland’s smoked salmon is simply world class and is a common starter on most Scottish restaurant menus. Freshly caught and hand filleted, traditional smoke houses use use time-honoured methods to slowly ‘smoke’ the fish and give it its signature silky texture and succulent taste.

Has reading this made you hungry? Learn everything there is to know about Scottish food and drink, whet your appetite some more with our Foodie Trails eBook, and be sure to share all you culinary discoveries with us using #ScotlandIsNow. You can even make some of Scotland’s favourite dishes yourself using these great recipes.

The Best Scottish Food You Must Try

16 of the Best Fish and Chip Shops in Scotland

All you need to know about foraging in Scotland