Many regions of the UK would be happy to claim King Arthur as their own. There are countless myths and legends surrounding this historical character, with many believing that Arthur had roots in Scotland’s history.

To celebrate the release of King Arthur: Legend of The Sword (watch the trailer here) Adam Ardrey, historian and author of Finding Merlin and Finding Arthur, has shared his extensive research on the topic with VisitScotland.

Here are 10 places you can visit to discover Arthur’s Scotland.

1. The Stone on the Summit of Dunadd Fort 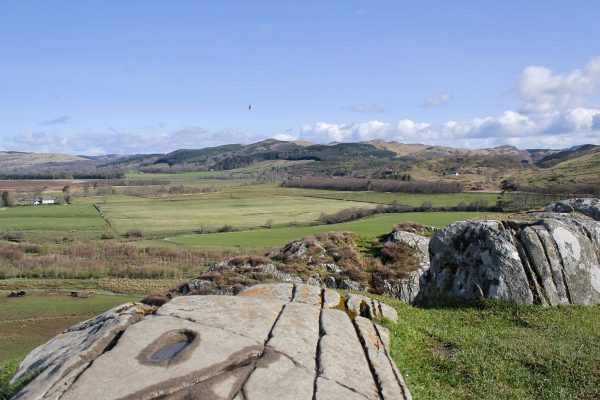 The footprint in the stone at Dunadd Fort, near Kilmartin ©Samantha Grant

According to legend, Arthur took a magic sword from a magic stone.

When Mac Aedan stepped out of the stone footprint, holding the sword, he literally took a sword from a stone. No magic was involved!

Centuries later, this event was magicked-up to become the wonderful Arthurian story everyone knows today.

In the 9th century a monk called Nennius wrote about the legendary King Arthur, including a list of 12 battles he fought.

Nennius called Arthur’s 12th battle, the Battle of Badon. The lands of ‘Badden’ are close to Dunadd Fort. 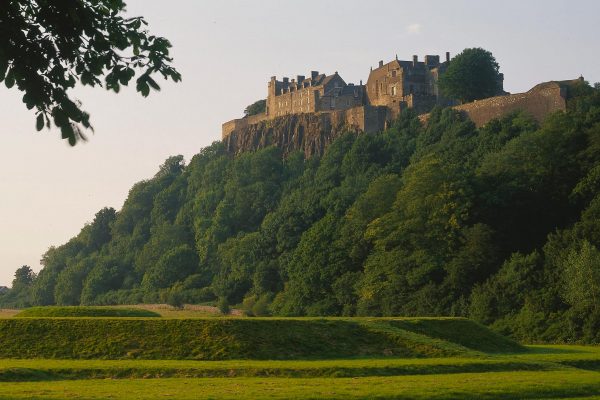 The King’s Knot below Stirling Castle.

Following the first ever non-invasive archaeological survey of the King’s Knot near Stirling Castle, archaeologists from Glasgow University found a round feature that pre-dated the visible earthworks.

This discovery corroborated the stories through the centuries that located Arthur’s legendary round table in Stirling.

Arthur Mac Aedan would have also known this area well, as his father was based in Stirling during the late 6th century.

3. The Window at Stobo Church, Stobo 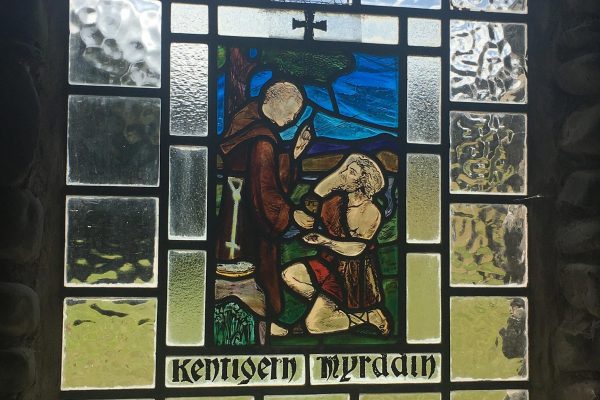 In 573 AD following defeat in battle, when Merlin was fighting against Arthur, he hid in the nearby Caledonian Wood.

In 580 AD Merlin and Mungo met to negotiate Merlin’s return to favour, where the Pausayl Burn meets the River Tweed, near what are known today as Merlindale and Stobo.

This meeting inspired the local tradition that Merlin died at Drumelzier, near Stobo, although there is another Drumelzier, where Merlin is said to have died, a few miles south of Stirling. 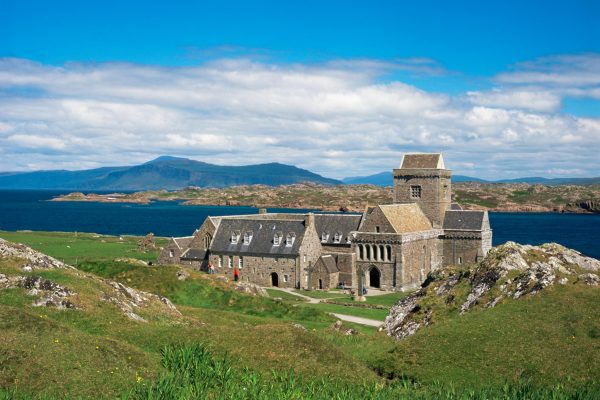 According to legend, King Arthur was buried on the Isle of Avalon in the Western Sea.

In the sea off Scotland’s west coast lies the Isle of Iona, where dozens of Scottish and other kings are buried.

Iona is best known for the Christian Saint Columba and its abbey, but long before Columba arrived, Iona was known as the burial place of the Mac Aedan family, including Arthur.

They were buried in the Reilig Odhrain (the graveyard of Oran). Today you can visit the little chapel dedicated to St Oran near the abbey.

5. The Necropolis and Glasgow Cathedral 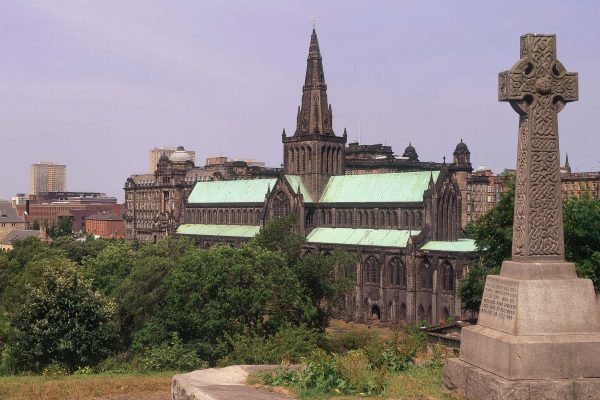 The view of Glasgow Cathedral from the Necropolis, Glasgow.

Until the mid late 6th century the site of the Glasgow Necropolis was a druidic grove and according to 12th century sources, Merlin stood on the hill and shouted down across the Molendinar Burn at St Mungo in his church below.

Parts of the Molendinar Burn can still be seen today and the church is now the beautiful Glasgow Cathedral.

Merlin’s druidic grove changed purpose when St Mungo buried the first body there, a man called Fergus. A carved image of Fergus on the cart on which his body was brought to Glasgow can be seen in the cathedral.

Outside in Cathedral Square, the images on the lamp posts commemorate Merlin’s twin sister, Languoreth the Queen. 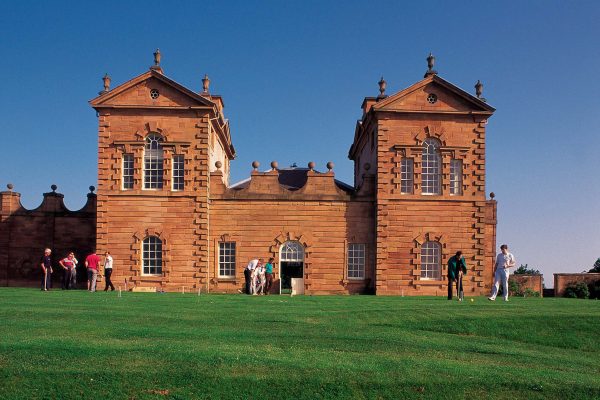 Merlin and Languoreth, were born in 540 AD at the edge of the Avon Gorge, by the side of a great oak wood at Cadzow, Hamilton.

Today this is the Chatelherault Estate and the Duke’s Bridge crosses the river leading to the oaks, some of which date back almost half way to the time of the siblings.

The ruins of Cadzow Castle can be seen and close by, Chaterherault Country Park and its impressive hunting lodge. On a clear day you can see Ben Arthur, 50 miles away.

Take a walk starting at the country park visitor centre through ancient woodlands and along the dramatic Avon Gorge. 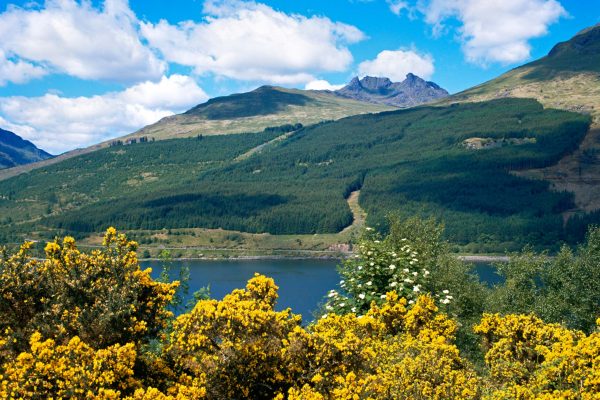 All of  Nennius’ 12 legendary King Arthur battles could have taken place in Scotland.

In the 570s AD Arthur Mac Aedan, won his 1st battle; the battle of the River Glein near Tarbert, Loch Lomond.

Arthur went on to win 4 campaigns, fighting against the Picts near Loch Lomond. Nennius listed these as battles 2 to 5 and called them the Douglas Battles.

Arthur’s headquarters were at the eastern end of the Rest And Be Thankful. Why not drive up the pass that leads to the heartlands of Argyll and pass the mountain, known today as Ben Arthur? 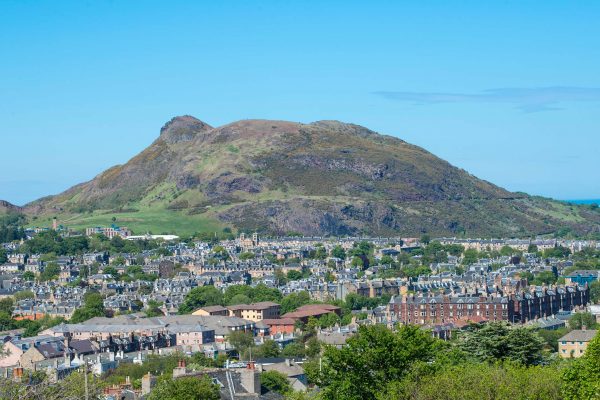 The legendary Arthur battles 7 to 10 were fought along a line that runs from Stirling to the south of Edinburgh and on to Berwick-upon-Tweed.

In one campaign, fought in the 580s AD, Arthur Mac Aedan saved Edinburgh from being ‘sacked’ by the Angles.

This campaign was commemorated by naming the vast rock that dominates Edinburgh’s skyline, Arthur’s Seat.

9. The Roman Fort at Trimontium, Melrose 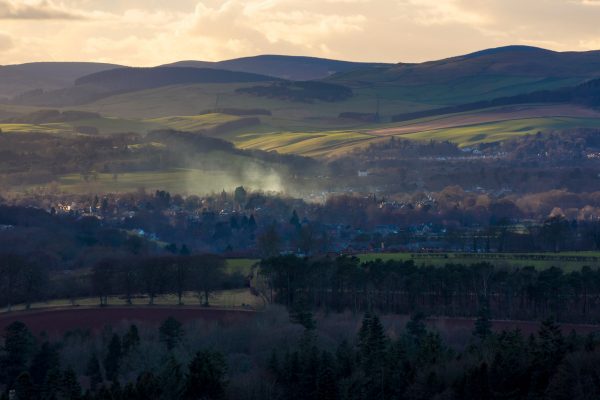 Melrose in the Scottish Borders.

To find out more about the Roman Fort, visit the Trimontium Museum part of the Three Hills Roman Heritage Centre in Melrose.

10 miles from Melrose, down the Roman road, Dere Street is where Nennius’ 10th Arthur battle, the Battle of Tribruit or Trevroit was fought at Monteviot. 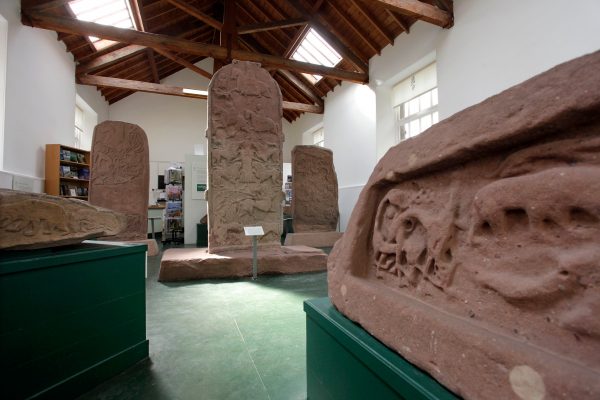 Local tradition holds that the spectacular standing stone Meigle 2 depicts Arthur’s wife Guinevere or, as she is known locally, Vanora.

The Meigle 2 stone was originally located in front of a mound traditionally identified as Guinevere, or Vanora’s grave.

As folklore has it, she was abducted and torn apart by the wild beasts shown on the stone. Although these may be the lions in the biblical story of Daniel. Visit the Meigle Sculptured Stone Museum in Meigle, Perthshire for yourself and decide.

The vital matter is this, if the legendary King Arthur was a man of the south, why has his wife had a Meigle connection since time immemorial?

Of course, if King Arthur was Arthur Mac Aedan, this question is easily answered.

Want to find out more?

There are many more sites in Scotland which may have connections to King Arthur. From the Scottish Borders to Perthshire and Glasgow and the Clyde Valley to Argyll and the Isles we’ve featured 10 sites here to get you started.