Scotland is well known as an ancient land with a fascinating history. What you might not know though, is how far that history stretches back – some of our sites are older than Egypt’s great Pyramids of Giza and Stonehenge in England.

Do you have a holiday in Scotland coming up or are you planning your next break? Get a preview of the archaeology treasures which are waiting for you through the wonders of modern technology. It’s never been easier to see some of these amazing places virtually. Some links below take you to amazing 3D renders of selected sites, so you can learn more about them and for some, also see how they might have looked in their heyday.

Scotland’s history stretches back over many millennia and nowhere is this more evident than in Shetland, Orkney and the Outer Hebrides. Dating back some 5,000 years, you’ll find some of the oldest structures in Europe in these special places.

You might assume that early settlers were unsophisticated and uncivilised. However, archaeological excavations continue to show that these islanders were both clever and cultured. Many of the structures they built reflect that and a number remain surprisingly intact to this day. 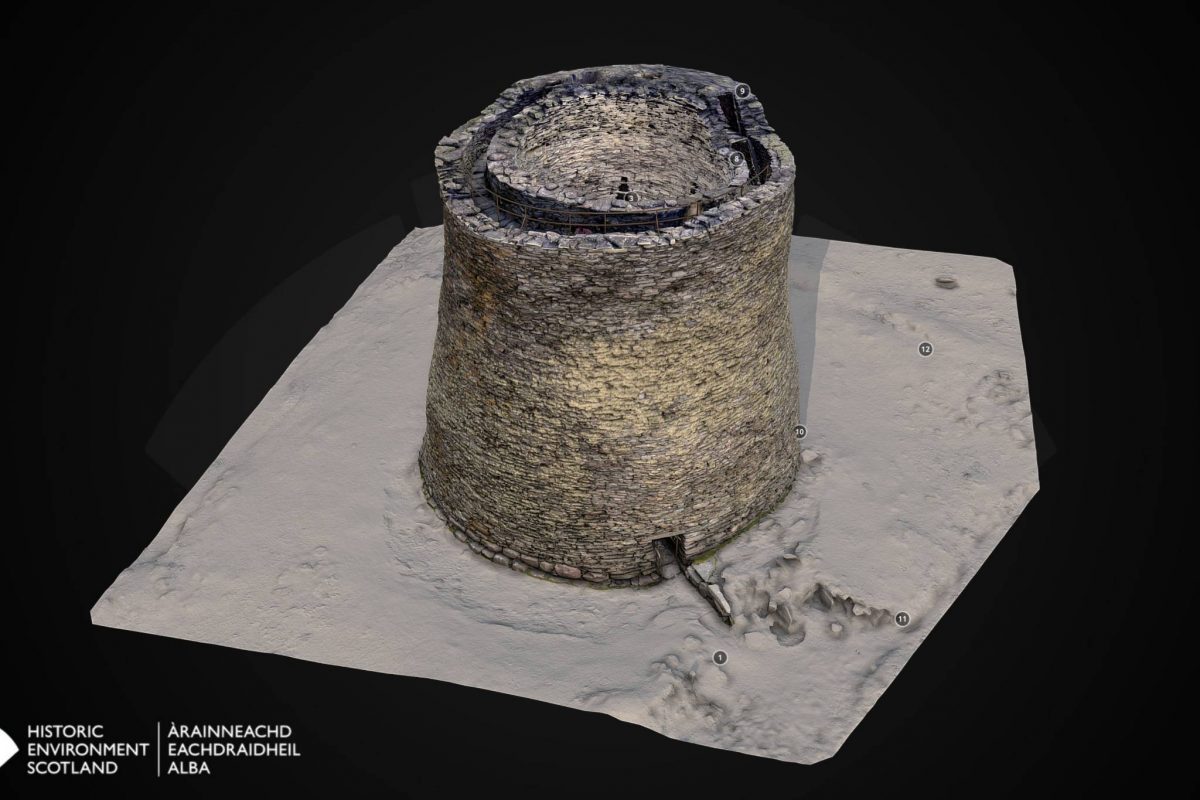 Dating back 2,000 years, the UK’s largest colony of storm petrels may be the modern-day ‘invaders’ of Mousa Broch in Shetland, however, it features prominently in the ancient Norse history of these islands. This is a solid stronghold that protected its occupants from the elements and invaders alike and is the tallest remaining broch tower of over 500 that were built across Scotland. 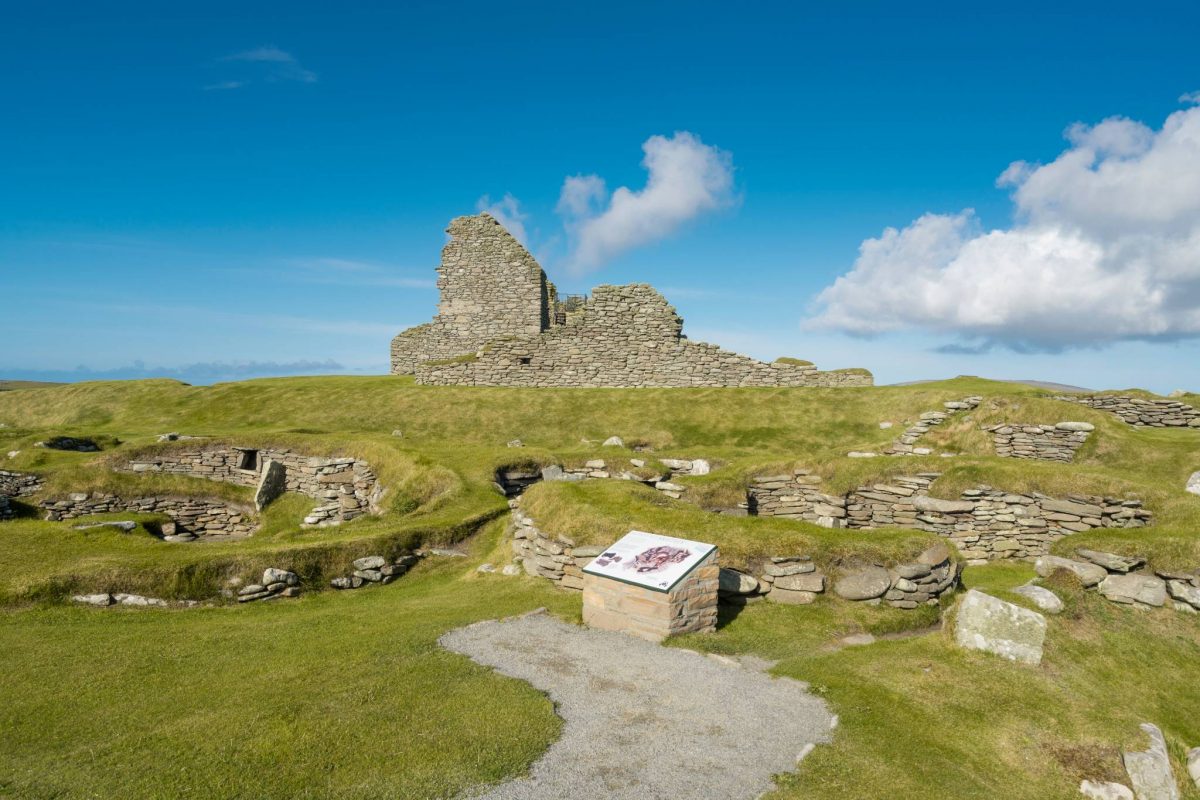 Staying in Shetland, we head south to the amazing structures of Jarlshof near Sumburgh Airport. This is one of the UK’s finest archaeological sites. It was first settled over 4,000 years ago during the Bronze Age and then continuously inhabited through the Iron Age, Norse settlement and Medieval times to the 17th century. 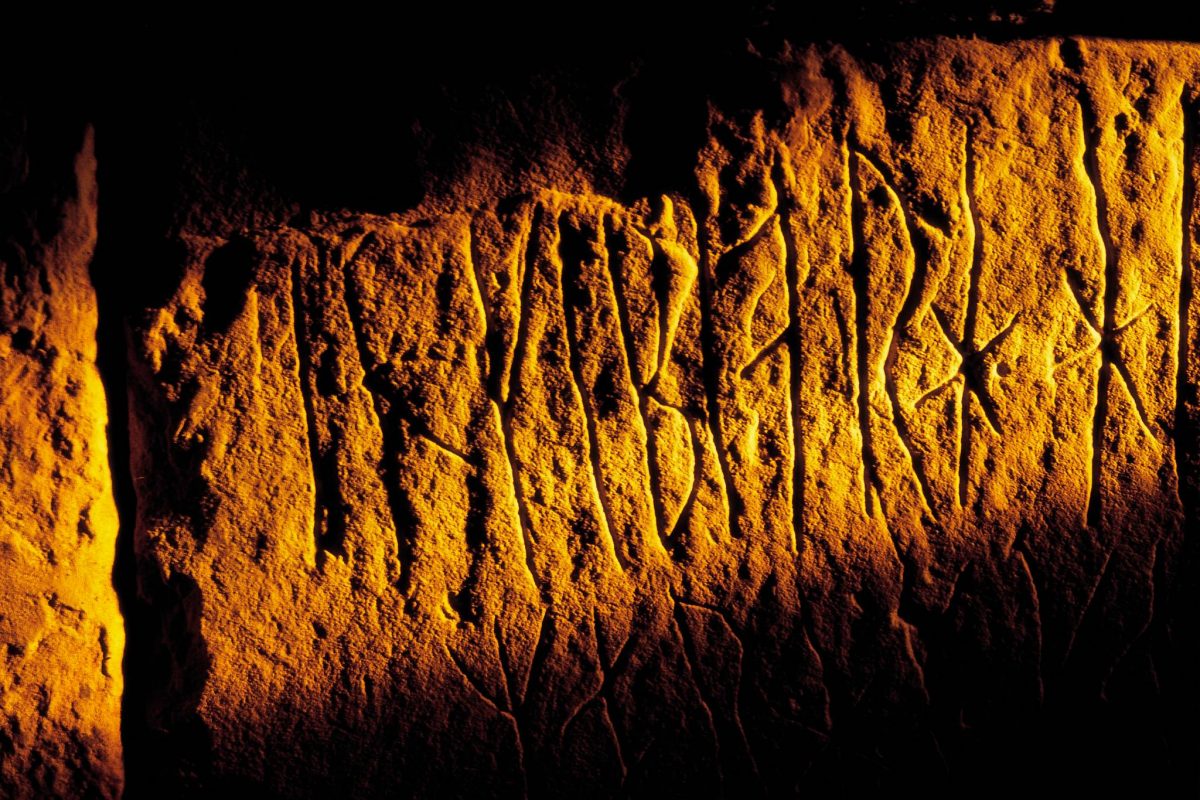 Next, we cross the North Sea to the Orkney islands. Like Shetland, the influence of Neolithic and Norse settlers is very evident here to this day. Alongside the more popular world heritage sites of Skara Brae, Maes Howe and the Ring of Brodgar, you’ll find an unparalleled collection of well-preserved buildings that are full of mystery and myth, both on the Mainland and in the outlying islands. 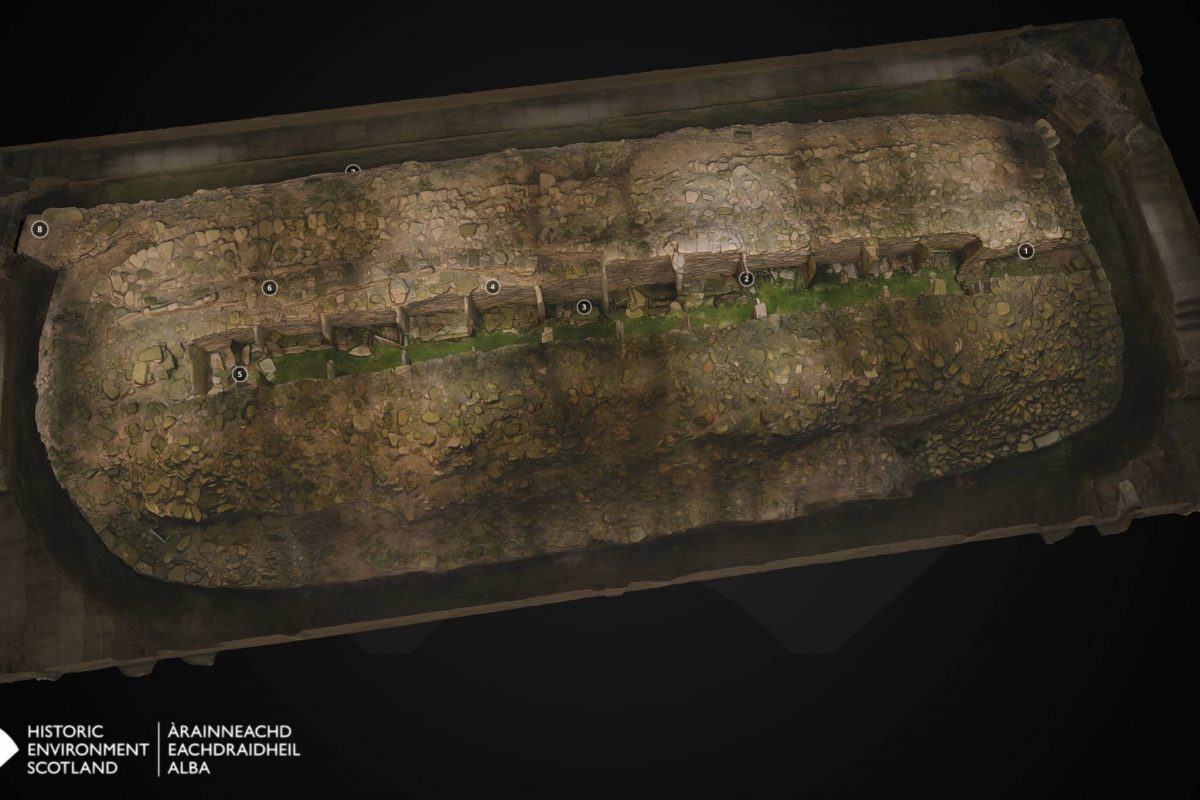 On the island of Rousay for example, you’ll find Midhowe Chambered Cairn, which it’s believed, dates back to 3,500 BC. At 75 feet long, this is the largest burial cairn in Orkney and one of 15 found on Rousay alone! There was clearly a thriving community around Midhowe Broch, one of nine brochs that peppered the shores of Eynhallow Sound, and its leaders would likely have been buried in the cairn. 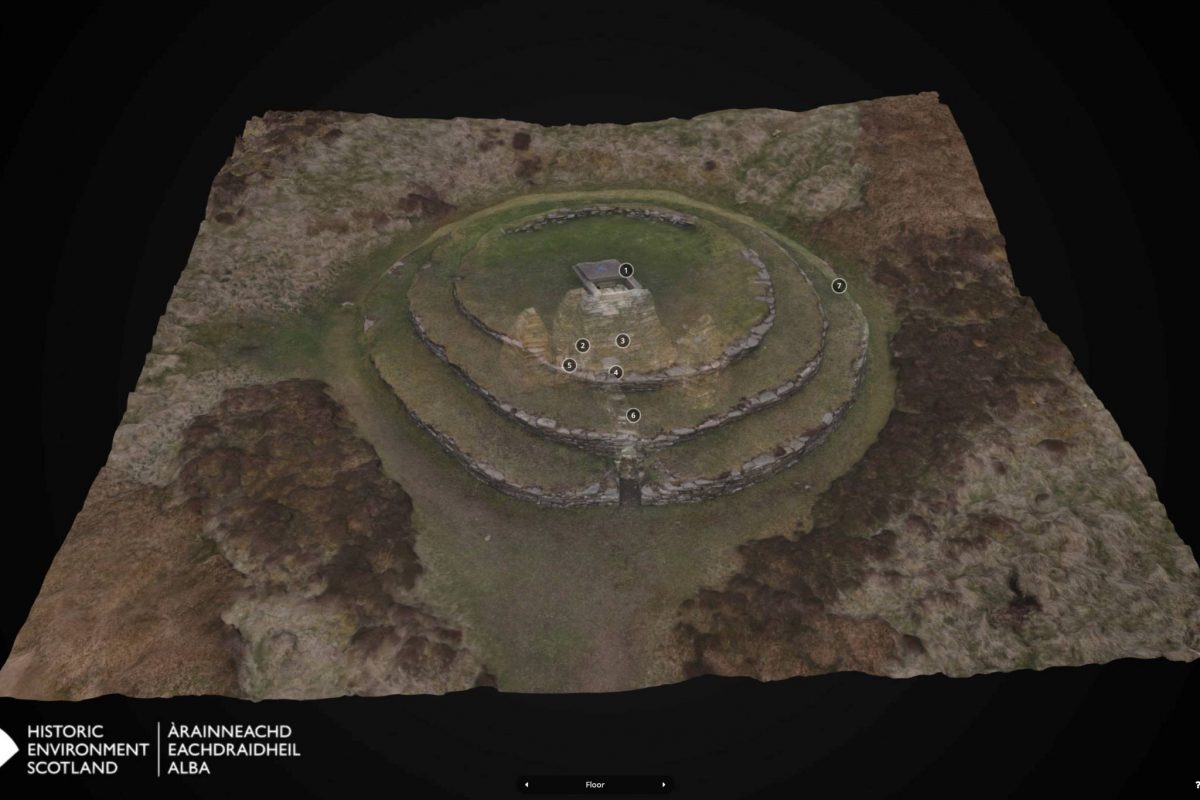 Near Kirkwall, Orkney’s ‘capital’, you’ll find Wideford Hill chambered cairn. Hewn into the north-western slopes of the hill, this cairn is believed to be over 5,000 years old. It’s possible to walk from Kirkwall to the site, which, on a clear day offers stunning views over the outer islands. 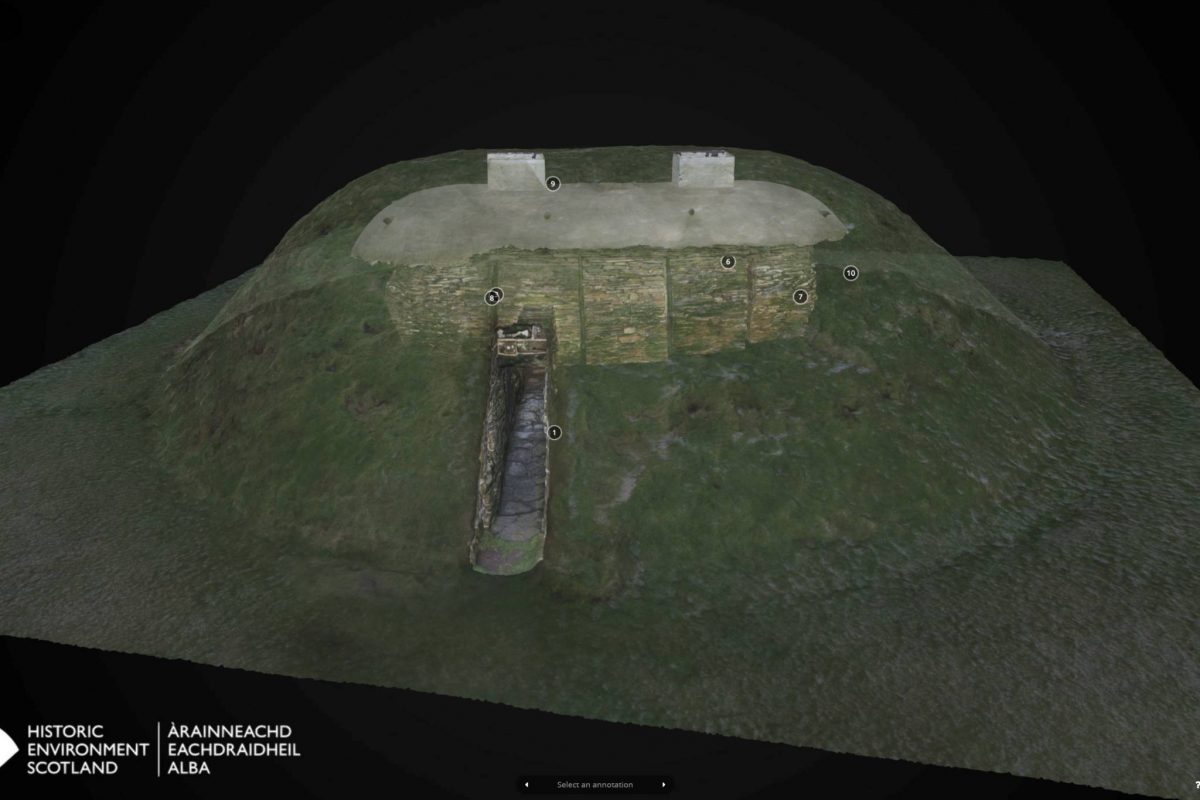 Looking east over the Loch of Stenness, towards the amazing Neolithic sites of the Ring of Brodgar, the Standing Stones of Stenness and the Ness of Brodgar, Unstan Chambered Cairn offers stunning views over an ancient landscape. This site is particularly well-known for its excavations of Unstan ware – elegantly designed pottery that was found in some of Orkney’s other chambered cairns. 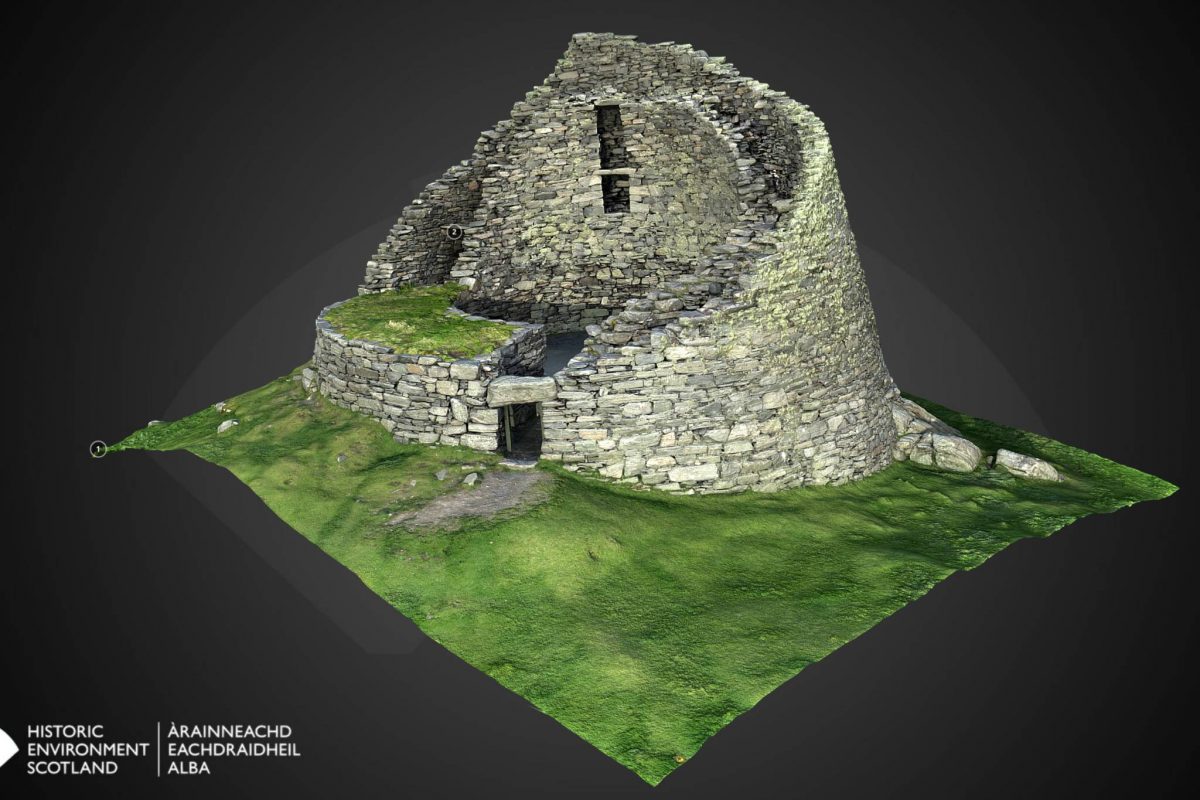 Our virtual odyssey takes us now to the Outer Hebrides and the Isle of Lewis, where we explore Dun Carloway Broch. Like some of its northern isles counterparts, this is another example of a wonderfully well-conserved broch tower, which is spectacularly set amidst stunning scenery. 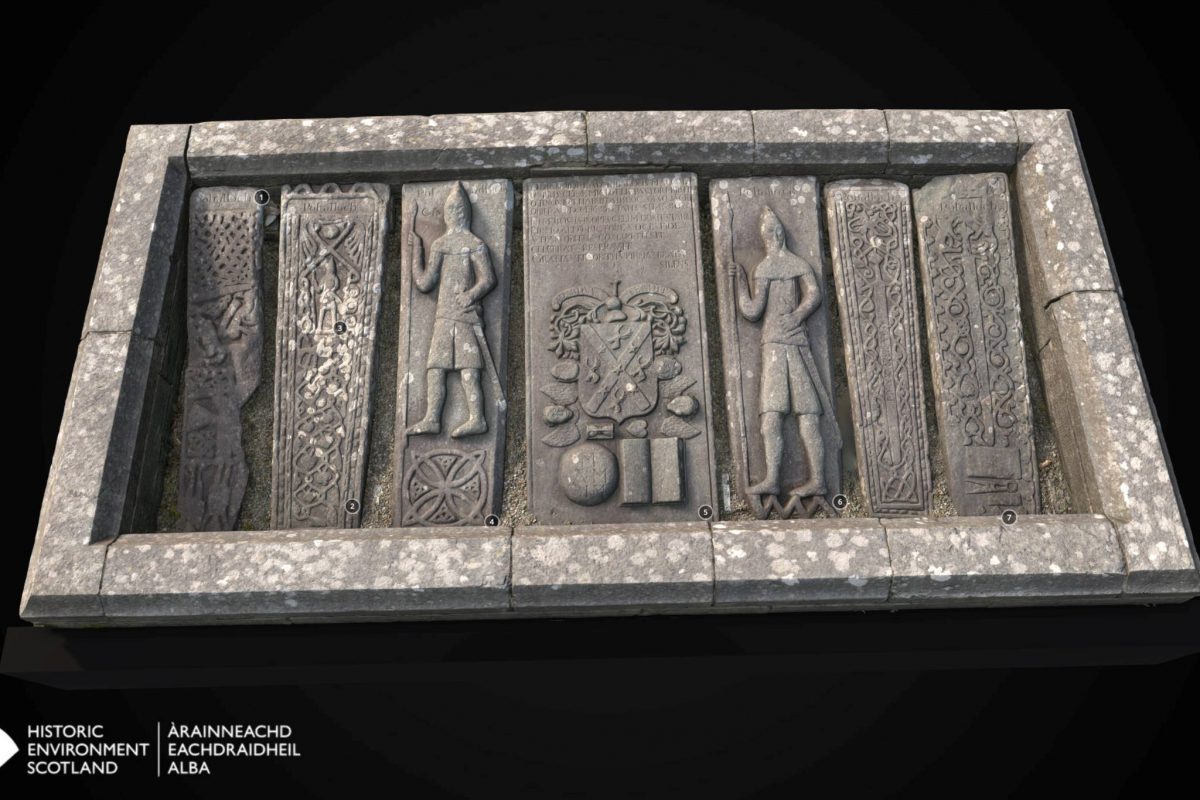 Of course, not all of Scotland’s remarkable pre-historic sites are confined to the islands. In Kilmartin Glen in Argyll, you’ll find over 350 historic places, ranging from standing stones and ancient sculptures to cup and ring-marked stones, as well as Dunadd hillfort – once the crowning place of our earliest kings.

The Romans in Scotland

The Romans began their conquest of Scotland around AD70, though found the unruly Caledonians a wee bit troublesome. In AD142, Emperor Titus Aelius Aurelius Caesar Antoninus ordered the construction of the Antonine Wall as the northern-most frontier of the empire, and quite possibly to demonstrate Roman might to the rowdy locals. In 2008 it became a UNESCO World Heritage Site.

Running from the Firth of Clyde to the Firth of Forth, this was a 3-metre high, mostly turf wall, likely topped with timber fortifications with a deep ditch. Along its 36-mile (57 km) length ran 16 forts, housing a combined garrison of some 7,000 legionaries. 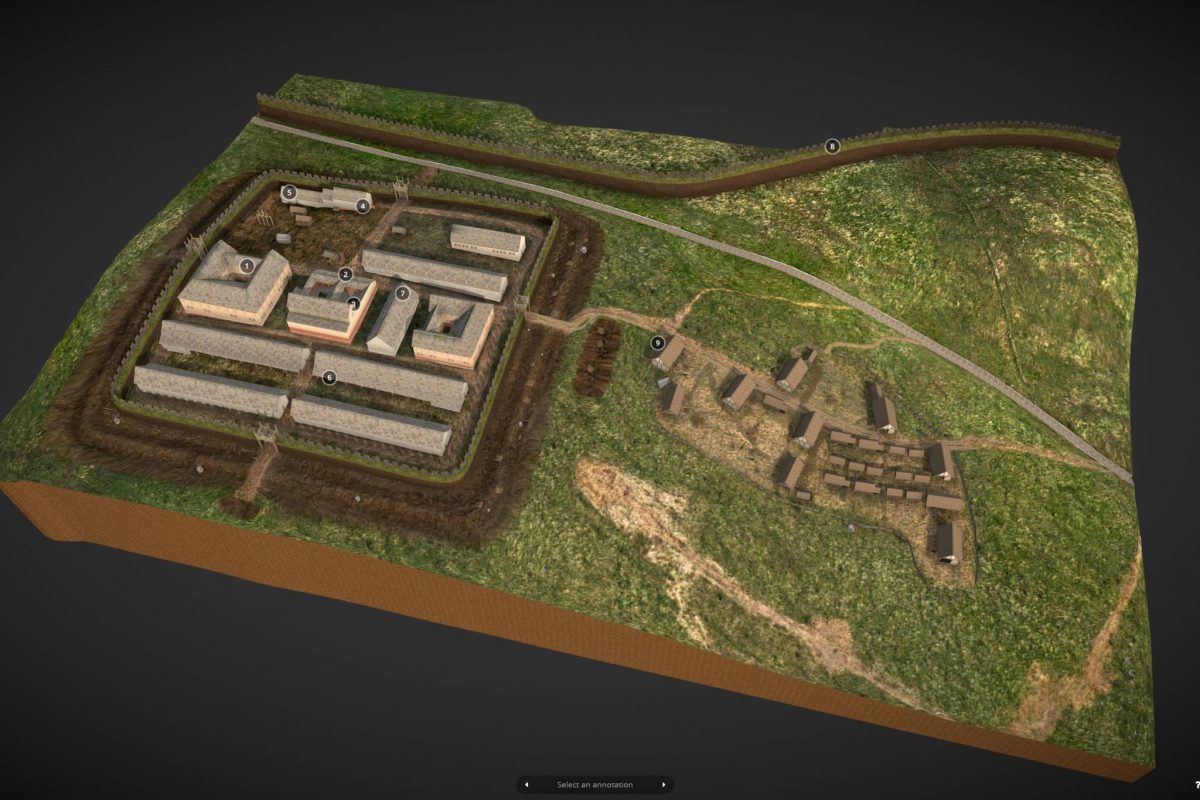 The ruins of Bar Hill Fort sitting on its elevated and strategic site near Twechar, is one of the best preserved of these forts, though oddly, it doesn’t sit directly on the wall itself. The foundations of the fort, the headquarters building and the bath house are clearly visible today.

The Middle Ages & The Renaissance

Medieval Scotland was a somewhat turbulent place, where noble and clan rivalries dominated the landscape and the populace. Thick-walled castles offered the lairds, their kinsfolk and servants some protection from warring foes and as a result, thousands were built during this period. 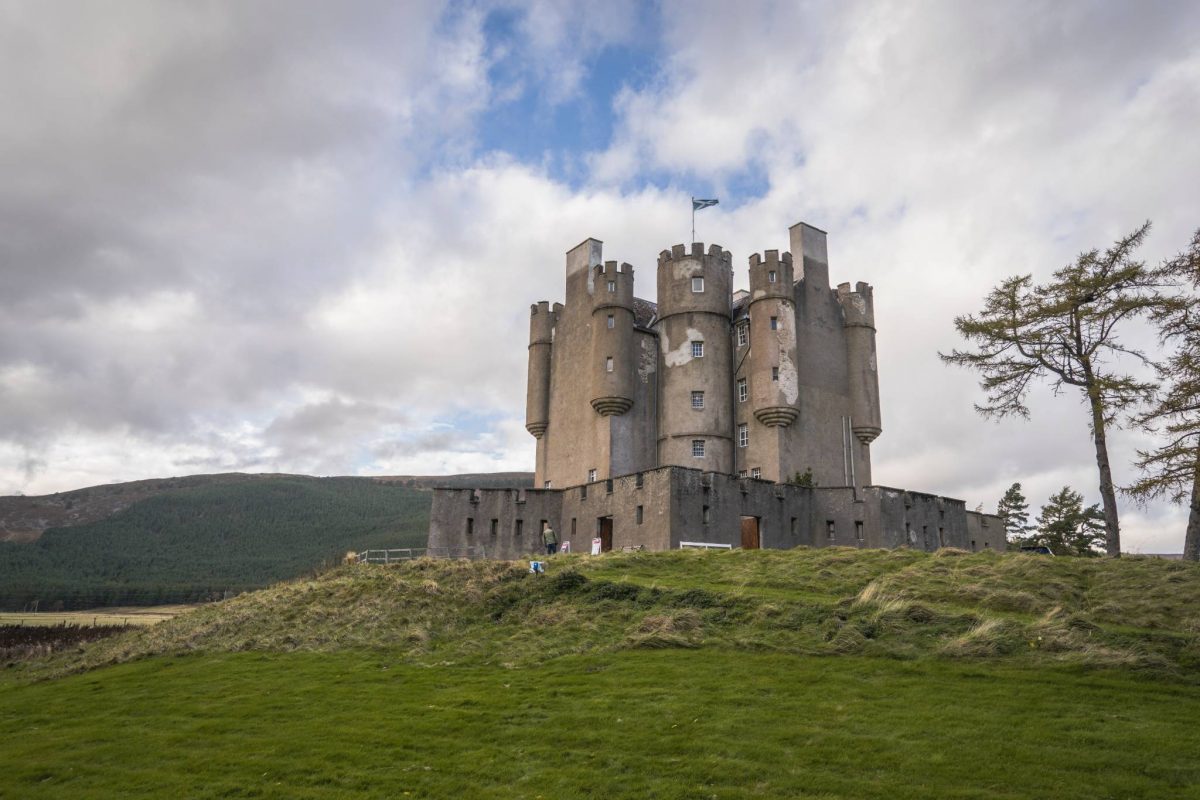 Built in the late middle ages as a hunting base and status symbol by the powerful 2nd Earl of Mar, Braemar Castle in Royal Deeside featured prominently during the Jacobite Risings. Queen Victoria, who loved this part of Scotland, also visited the castle. Today, it is undergoing restoration and is run by the local community as a popular visitor attraction. 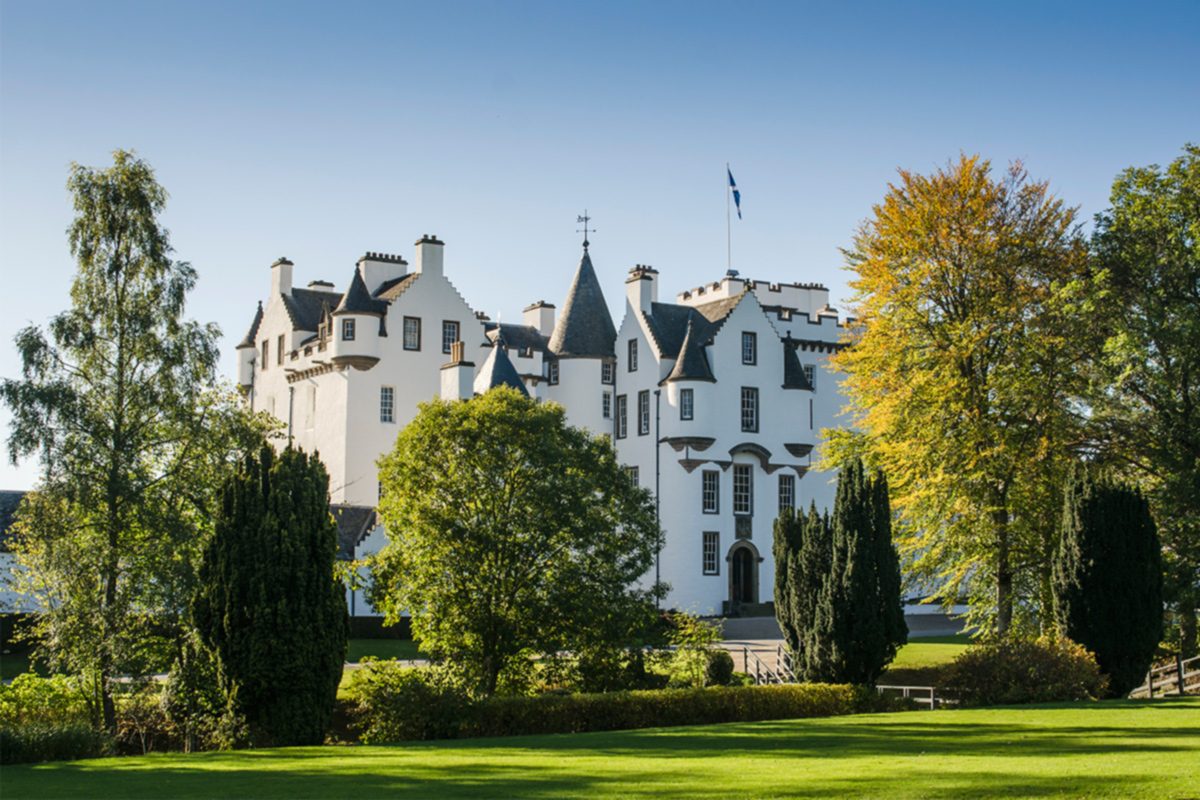 Blair Castle has seen many changes down the centuries and has many a grisly tale to recount. This is the ancient seat of the formidable Dukes of Atholl and was first founded by John Comyn I, Lord of Badenoch. The oldest part of the castle, Comyn’s Tower, dates back to 1269 and the castle was extended with various buildings added right up to the 19th century. Notable visitors to Blair Castle include Mary Queen of Scots and Queen Victoria. It was taken by Robert the Bruce, besieged by Cromwell’s forces and played a major part in the Jacobite Risings. 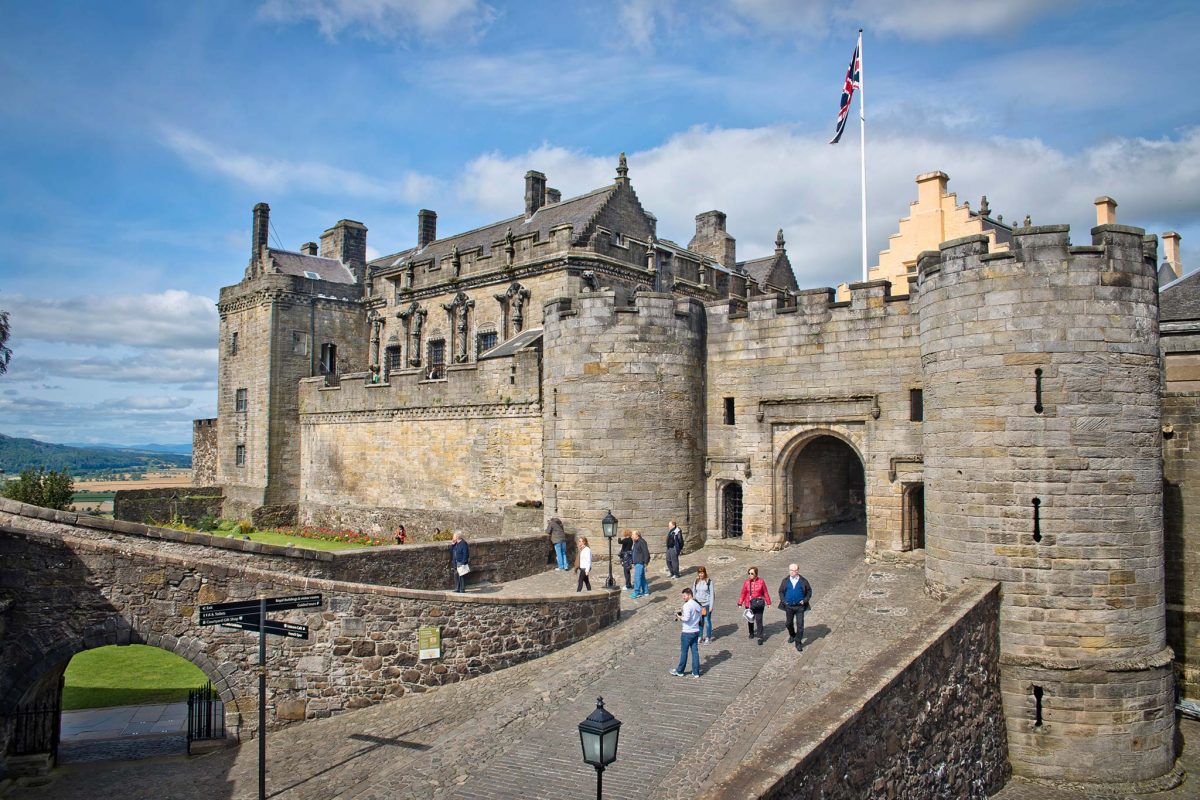 Of regal and strategic importance, Stirling Castle has been both a royal palace and a mighty fortress. It enjoys a commanding position with cliffs on three sides overlooking the city, which itself is steeped in history, and the fertile lands around the River Forth. It played a major role during the Wars of Scottish Independence and some parts of the castle date back to the 14th century, with other buildings added between the 15th to 18th centuries. 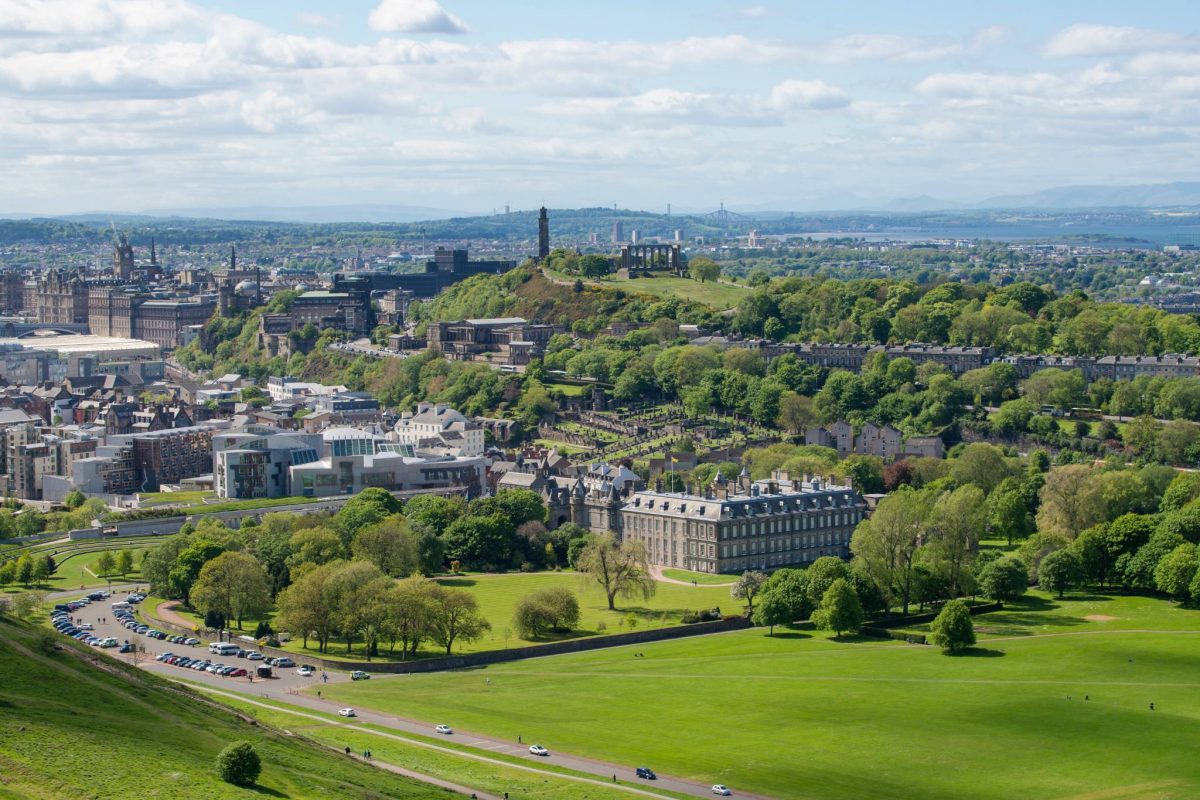 The Palace of Holyroodhouse and Holyrood Park with Edinburgh beyond

Founded as an Augustinian monastery by David I in 1128, the Palace of Holyroodhouse is the official residence of Her Majesty The Queen in Scotland. Originally built as an abbey, the palace has been at the centre of Scottish history for many centuries. It was here that Robert the Bruce held two parliaments, where members of the Royal Family have been crowned, married and laid to rest, where Mary Queen of Scots wed twice and where her private secretary, David Rizzio, was murdered in front of her. Most of the present-day palace was built during the 16th and 17th centuries. 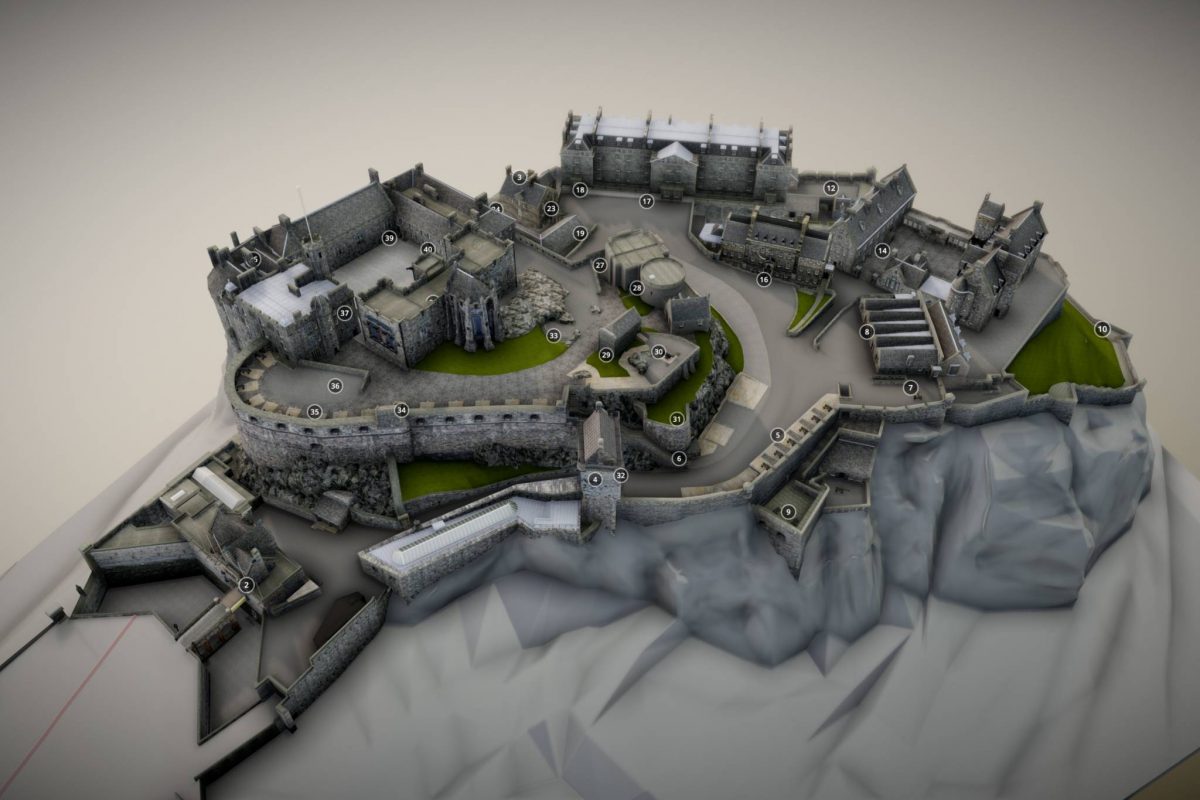 Edinburgh Castle is one of the world’s most beloved and well-known landmarks. Towering over the city, it has served as a royal residence, a fortress, a prison and a military garrison and is one of Scotland’s most popular visitor attractions. This castle has featured prominently throughout Scottish history and has the ‘honour’ of being the most besieged place in Britain. It’s where James VI of Scotland (I of England) was born and it even featured in the Napoleonic and World Wars and still serves as a military garrison today. This 3D model from Historic Environment Scotland is a great way to appreciate its scale and splendour. 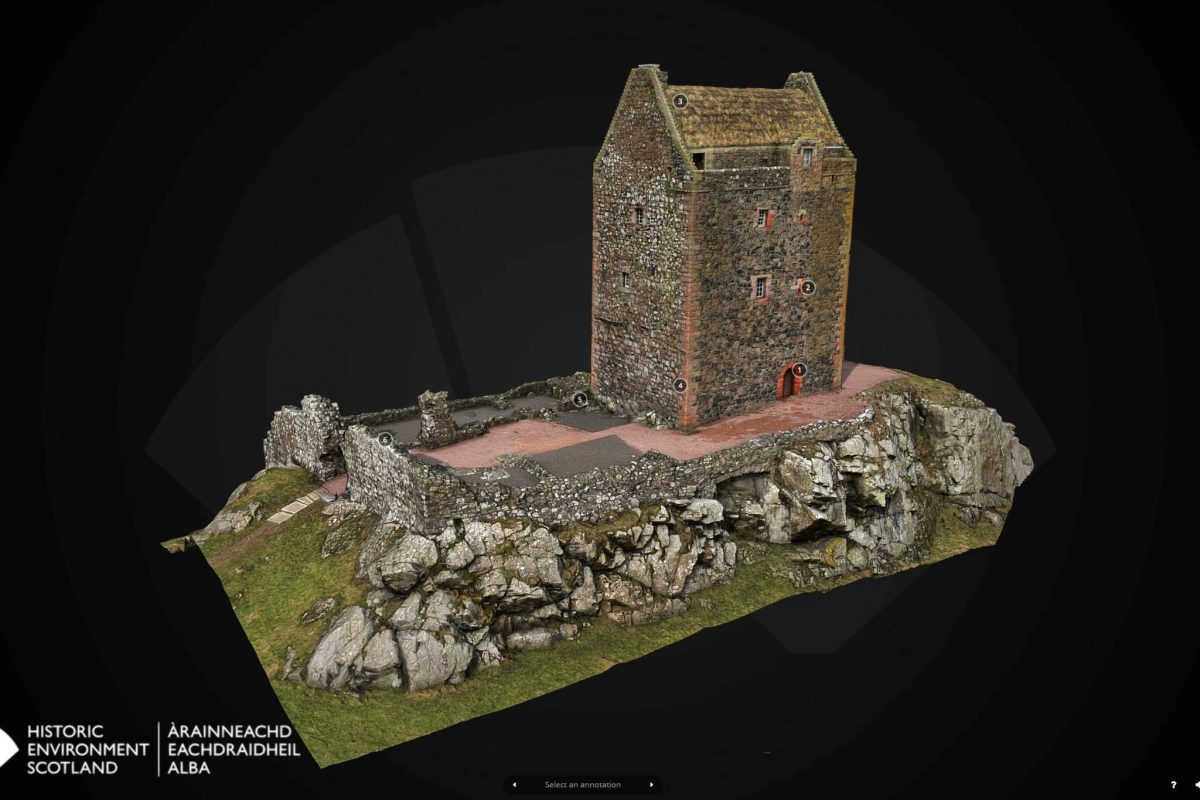 In bygone times, conflicts along the Scottish-English border were common, be they military in nature or Borders Reivers raiding cattle and horses. As a result, a number of defensive ‘Peel’ watch and signal towers were built, to guard against raiders and invaders. With walls over 2.5 metres thick, Smailholm Tower is one such tower and was built in the 15th century. The tower’s splendid and isolated position on Lady Hill provides remarkable views over the Scottish Borders and Northumberland in England, giving its occupants plenty of time to see trouble coming from some way off! 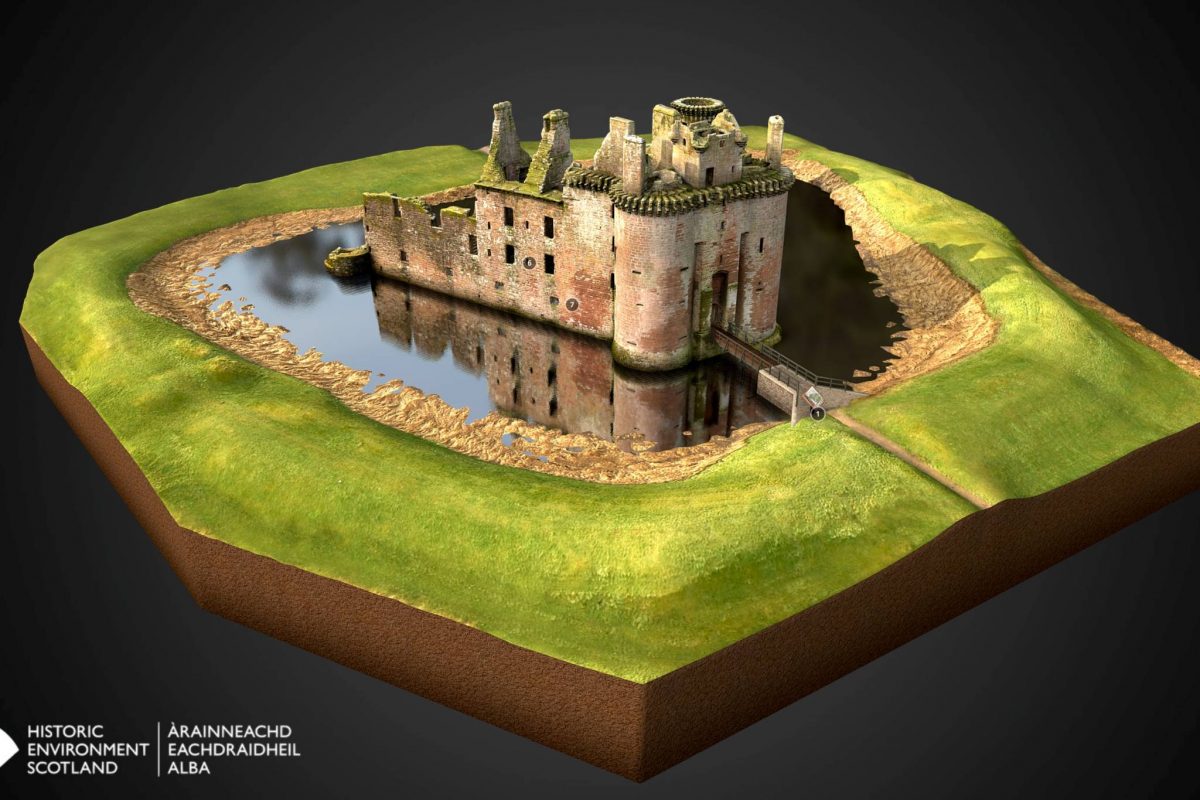 Caerlaverock Castle in Dumfries & Galloway is one of the most unique castles in Scotland, if not the UK. Its solid and distinctive triangular layout with sentinel towers at its east (now a short ruin) and west corners (still mostly complete), coupled with an impressive twin-tower gatehouse, set within a deep moat, withstood several sieges and must have seemed impregnable to would-be attackers. 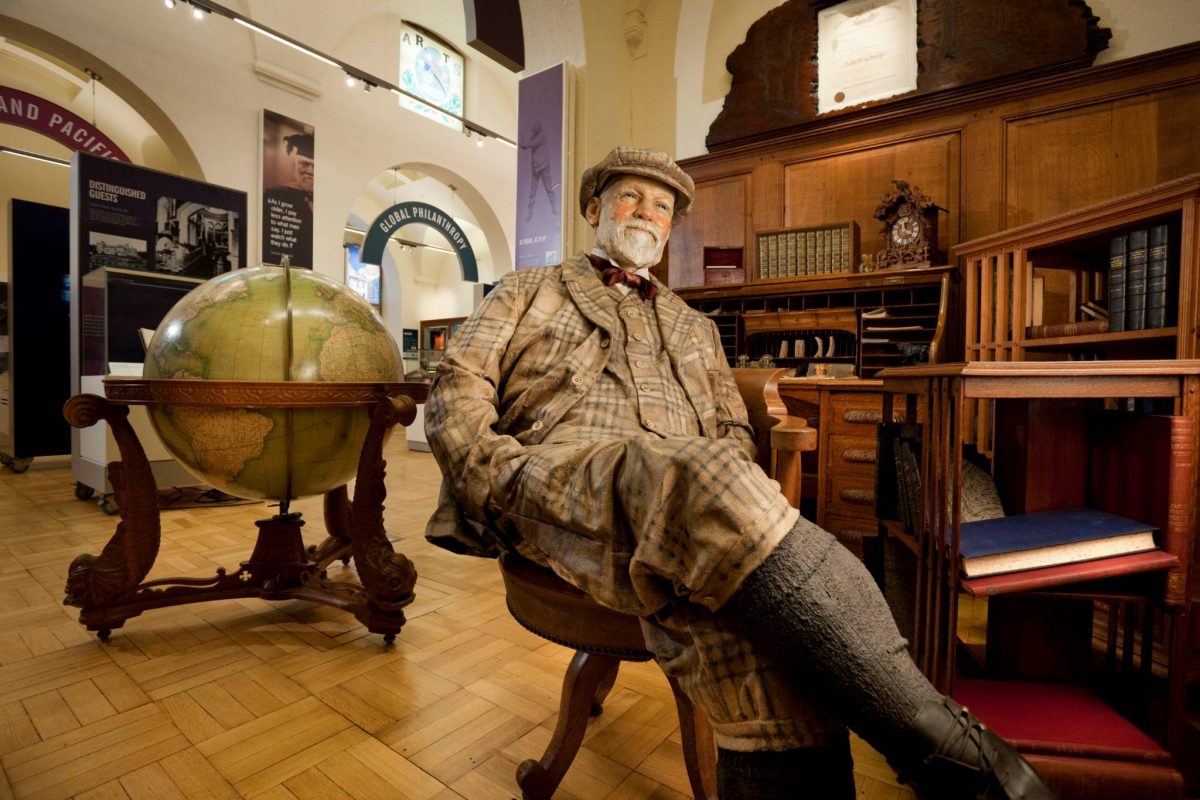 Our final stop on this virtual tour calls in at the Andrew Carnegie Birthplace Museum in Dunfermline. The museum celebrates the remarkable life of one of Scotland’s most successful industrialists and philanthropists, who was born in this historic town. Find out what it was like for Carnegie to grow up in 19th century Fife, about how he set up his first business in America’s steeltown, Pittsburgh, how he led the American steel industry, and became the richest man in the world.

The sites mentioned above offer a small snapshot into Scotland’s captivating history. Learn more on our history pages or from the Historic Environment Scotland and National Trust for Scotland websites.