Escape the crowds and head to the spectacular east coast of Scotland which includes East Lothian, Fife, Angus and Aberdeenshire. These beautiful regions are among the sunniest places in Scotland and are renowned for their tranquil, rocky shores, dazzling and often empty sandy beaches, pretty lighthouses and imposing castles. The east coast is also home to countless small towns and villages, all with their distinct charms, where you can spend a pleasant day out in a part of the country many say is one of Scotland’s best kept secrets.

Here are just 13 of the places you can spend a great day out in the east of Scotland, all of which are within easy reach of the cities of Edinburgh, Dundee and Aberdeen. Exploring by car? Read our Seven Days in the East of Scotland road trip itinerary. 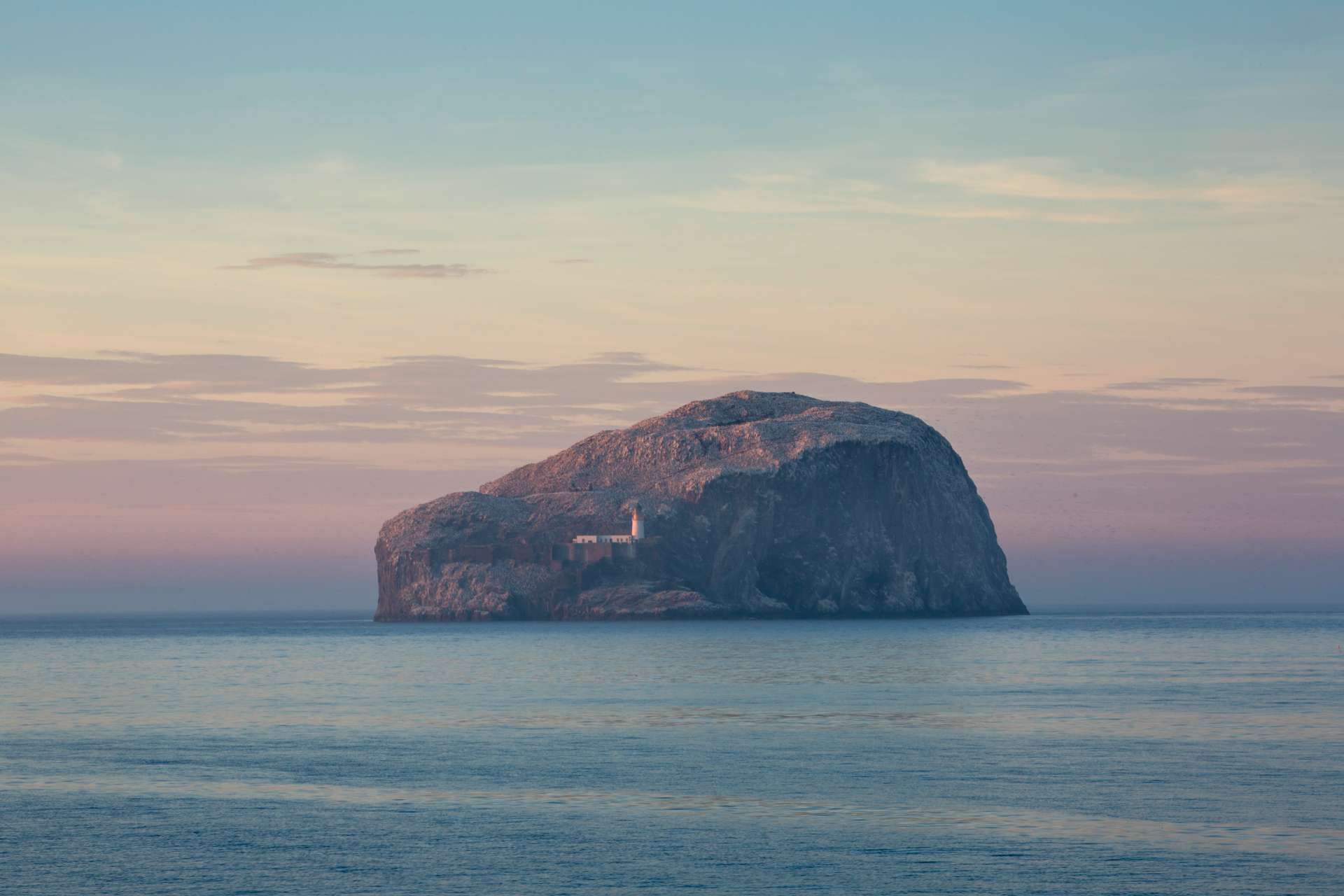 The Bass Rock is one of the most famous sights in East Lothian and is by far the most well known of the islands located in the Forth Estuary. It is an island in the outer part of the Firth of Forth around 2 km (1.2 miles) offshore, and 5 km (3.1 miles) north-east of North Berwick. It is a steep-sided volcanic rock, 107 metres (351 ft) at its highest point, and is home to a large colony of gannets. The Scottish Seabird Centre is one place which offers boat trips to the island to watch the the resident gannets as they plunge head-first into the North Sea.

Back on dry land, this is more to explore. On headlands above the beach, there are two ruined castles, the 14th century Tantallon Castle,  the 16th century Auldhame Castle, and Ghegan Rock, Britain’s smallest harbour, carved out of the red sandstone during the Victorian era. To the east on a rocky outcrop stands stands St Baldred’s Beacon, a large stone cross erected in memory of an 8th century hermit who lived on Bass Rock.

2. The Islands of East Lothian 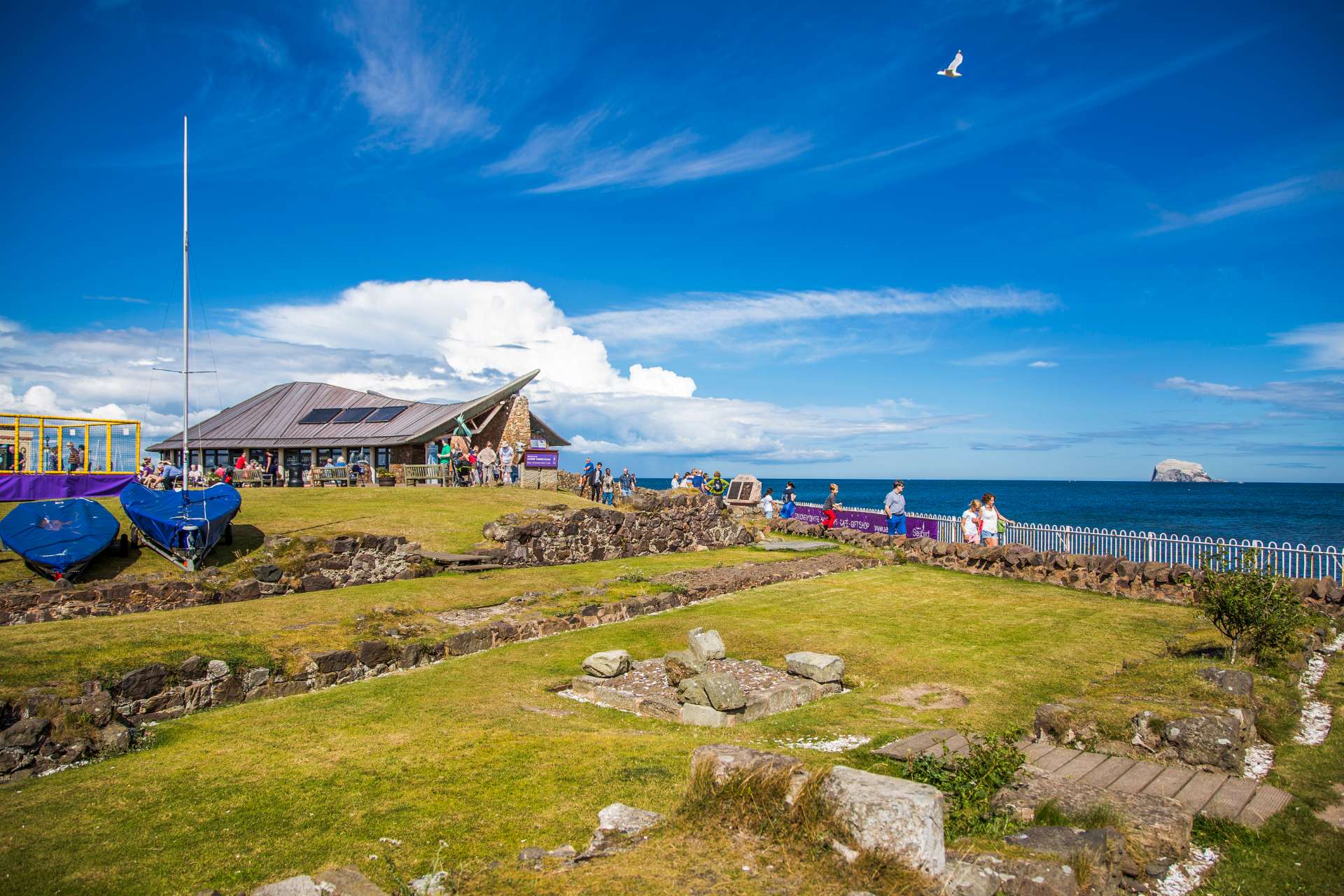 Explore the other islands on your boat trip. Fidra which can be seen from Yellowcraig beach is best known for its lighthouse which is thought to be the inspiration for Robert Louis Stevenson’s Treasure Island. There’s also the Lamb, off the coast of North Berwick, and Craigleith, home to a large population of Puffins. Further towards Fife is the Isle of May managed by Scottish Natural Heritage as a National Nature Reserve. Boat trips to see the islands, including the Bass Rock, can also be booked through the Scottish Seabird Centre. 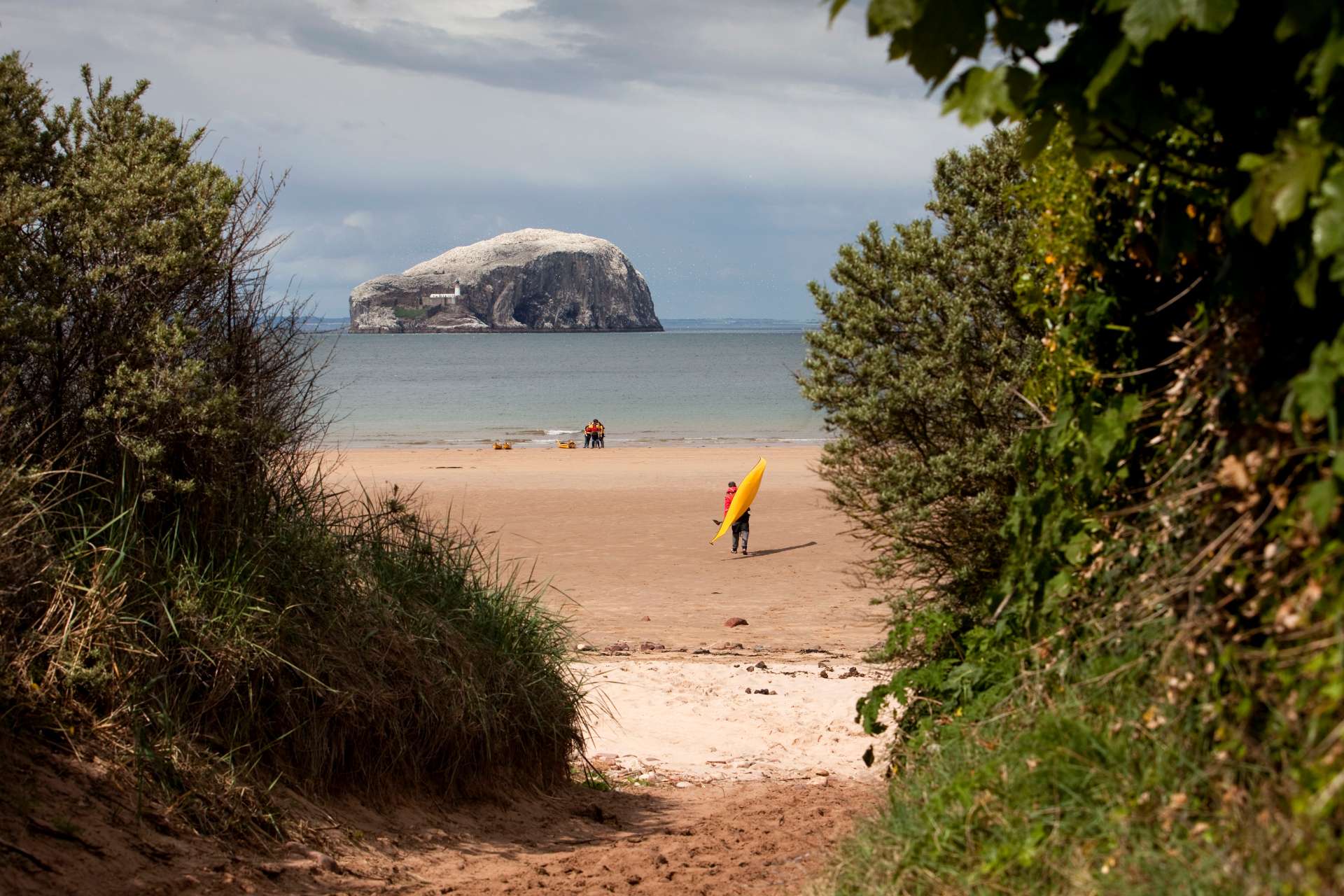 Bass Rock as seen from Seacliff beach, near North Berwick

Edinburgh is a fantastic city. But it can get quite hectic. Luckily, there are many serene places located under an hour from the capital where you can enjoy the serene beauty of the the East Lothian countryside. The little village of Gullane is about 45 minutes by car from Edinburgh and  boasts one of the finest beaches in East Scotland. It also offers easy access to other beautiful stretches of sand including Tyninghame, Yellowcraig and Seacliff. Stunningly ethereal is all kinds of weather, the beaches of East Lothian are the perfect antidote to the hustle and bustle of Edinburgh. North Berwick is located a short distance from Gullane where you can enjoy a superb selection of restaurants, cafés and hotels. 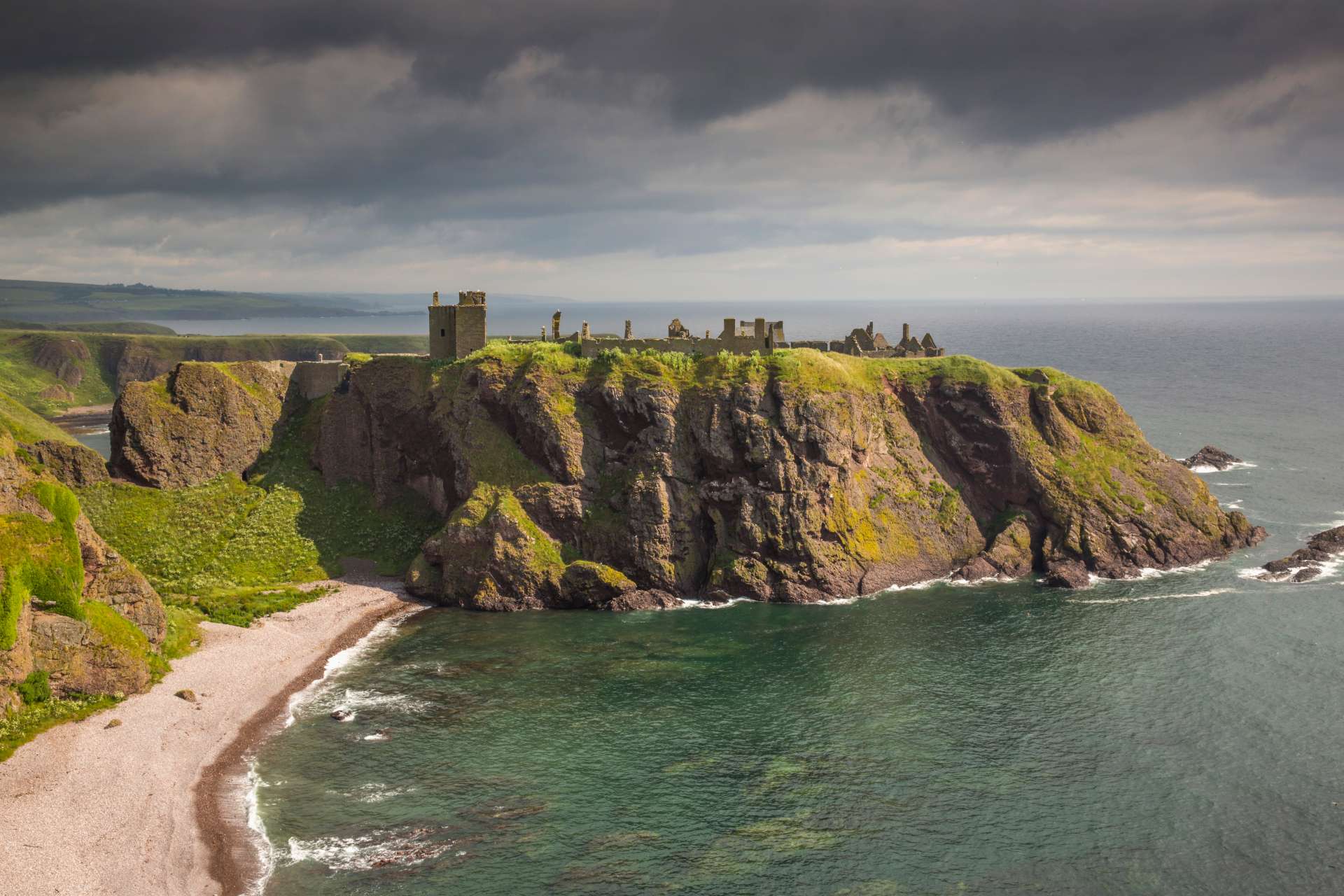 Aberdeenshire has more castles per acre than anywhere else in the UK and even has its own Castle Trail. But of all the castles, Dunnottar is perhaps the most iconic. Located just south of Stonehaven, perched upon a rocky cragg with the waves of the North Sea crashing below, its history is just as dramatic as its setting. It has played a central role in some of the most important and certainly notorious episodes in Scotland history – and was also the inspiration for the castle in Disney’s hit animated film Brave. While the north east coast of Scotland might seem quite off the beaten track to most visitors, Dunnottar and its nearby town of Stonehaven are in fact highly accessible. The castle lies half an hour south of Aberdeen by car, just outside of Stonehaven, and is located just a few minutes off the main road, the A90. Buses also stop at the castle car park, and the walk from Stonehaven’s train station to the castle takes just 15 minutes.

In 1894, while holidaying in Cruden Bay, Bram Stoker, author of Dracula, was invited by the 18th Earl of Erroll to visit his palatial home, New Slains Castle. Perched high above the rumbling North Sea with dark, swirling clouds overhead, the author was overcome with awe at the majestic castle. Its candlelit hallways and its mysterious owner are reportedly the real-life inspiration behind Count Dracula and his ruined Romanian lair. The New Slains Castle you encounter today is quite different from how Bram Stoker originally experienced it as it is now in ruins, but this simply enhances its spooky atmosphere. Be sure to stop by the Kilmarnock Arms Hotel after a stroll along the beach. This is where Stoker stayed many times on his visits to Aberdeenshire and if you look in the guestbook you will find his signature.

6. Elie and The Fife Coastal Path 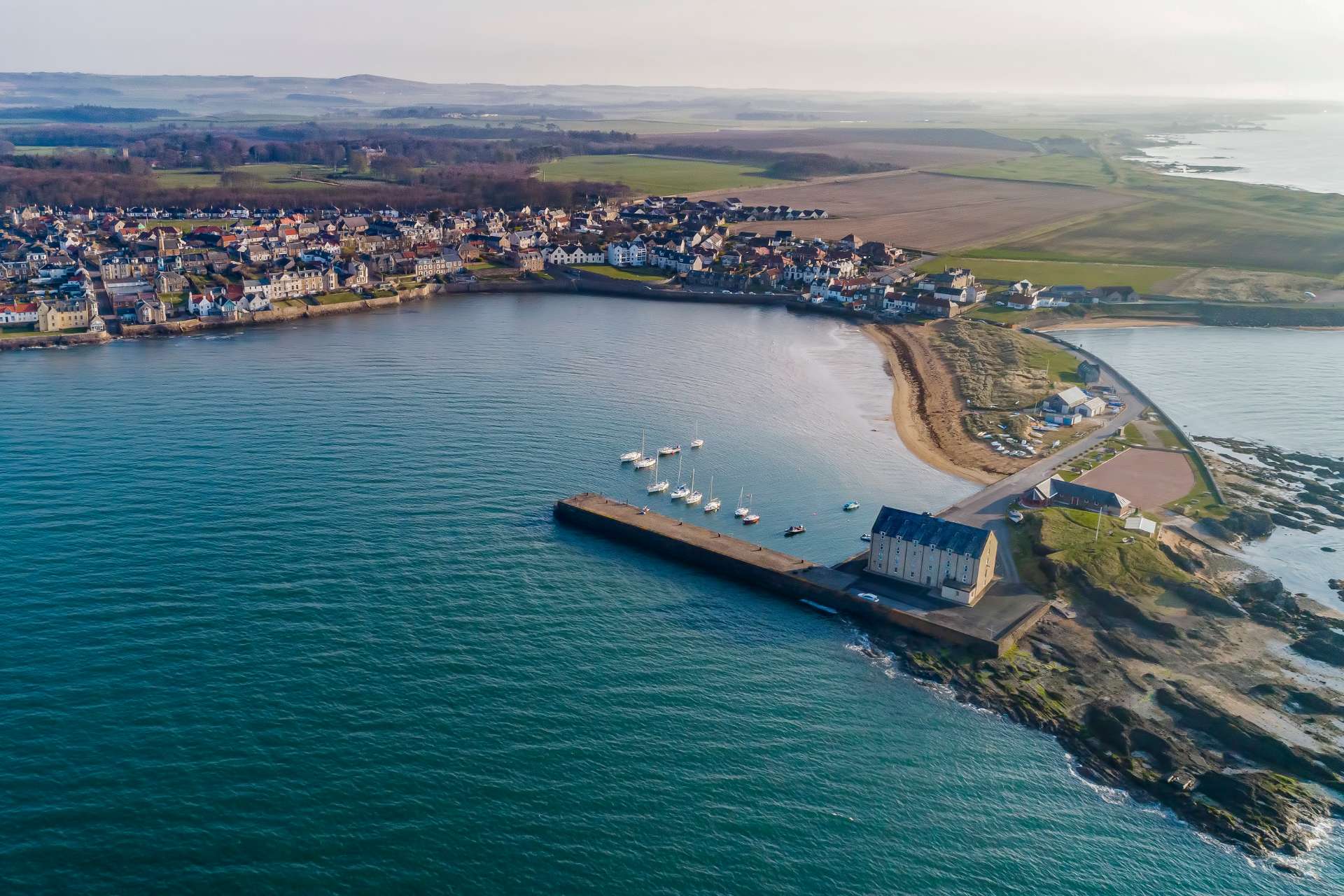 The idyllic village and harbour of Elie

The East of Scotland has no shortage of quaint fishing villages but but if you’re a first-time visitor or even a repeat visitor, Elie is one place which should definitely be at the top of your list. Soak up the tranquility and socialise with the locals at the famous Ship Inn with its beer garden and cricket pitch on the beach, or take a walk along its crescent shaped bay.  It’s only half an hour from bustling St Andrews and is an ideal place embarks upon the Fife Coastal Path and onwards to Kingsbarns beach or the Cambo Estate and Walled Garden.

Fife has some amazing beaches that are more popular – Elie and Earlsferry in the East Neuk, for instance – but Tentsmuir Sands, seven miles north of St Andrews, is simply outstanding. Three miles long, and very wide, its quiet golden sands are backed by sand dunes and a pine forest that is a National Nature Reserve. Wildlife thrives here including wildfowl and waders, with 12,000 eider arriving in October, while visitors can watch grey seals frolicking on sandbars throughout the year. The concrete blocks dotted along the shore were erected as coastal defences by the Polish army during World War II.  Please be aware that swimming is not advised due to quicksands and dangerous currents. 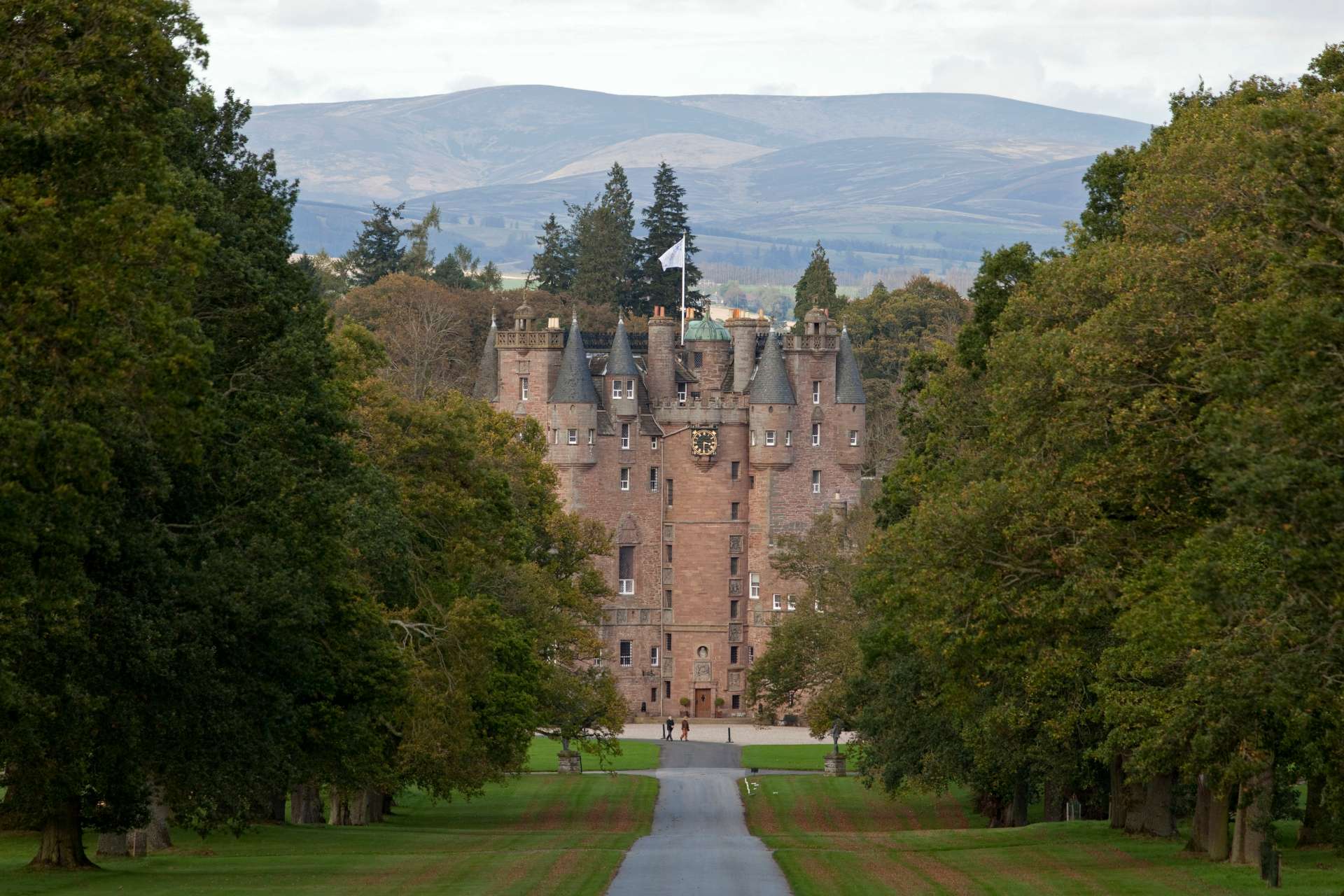 Glamis Castle is the childhood home of the late Queen Mother and appears like a castle out of a fairytale storybook. Its magnificent architecture dates from the Middle Ages but has undergone many alterations and additions throughout the centuries, and currently resembles a French château. Shakespeare chose to set Macbeth here, and it is easy to see why: it’s one of the most haunted castles in Scotland. Located just twelve miles from the Angus coast, it is perfect for a rainy-day visit, while its beautiful grounds are a joy to explore year-round. Explore the Walled and Italian gardens, the Nature Trail where you are likely to spot roe deer, red squirrels, pheasants, herons and other wildlife, and follow the Macbeth Trail which is lined with wonderful wooden sculptures depicting scenes from Shakespeare’s play. 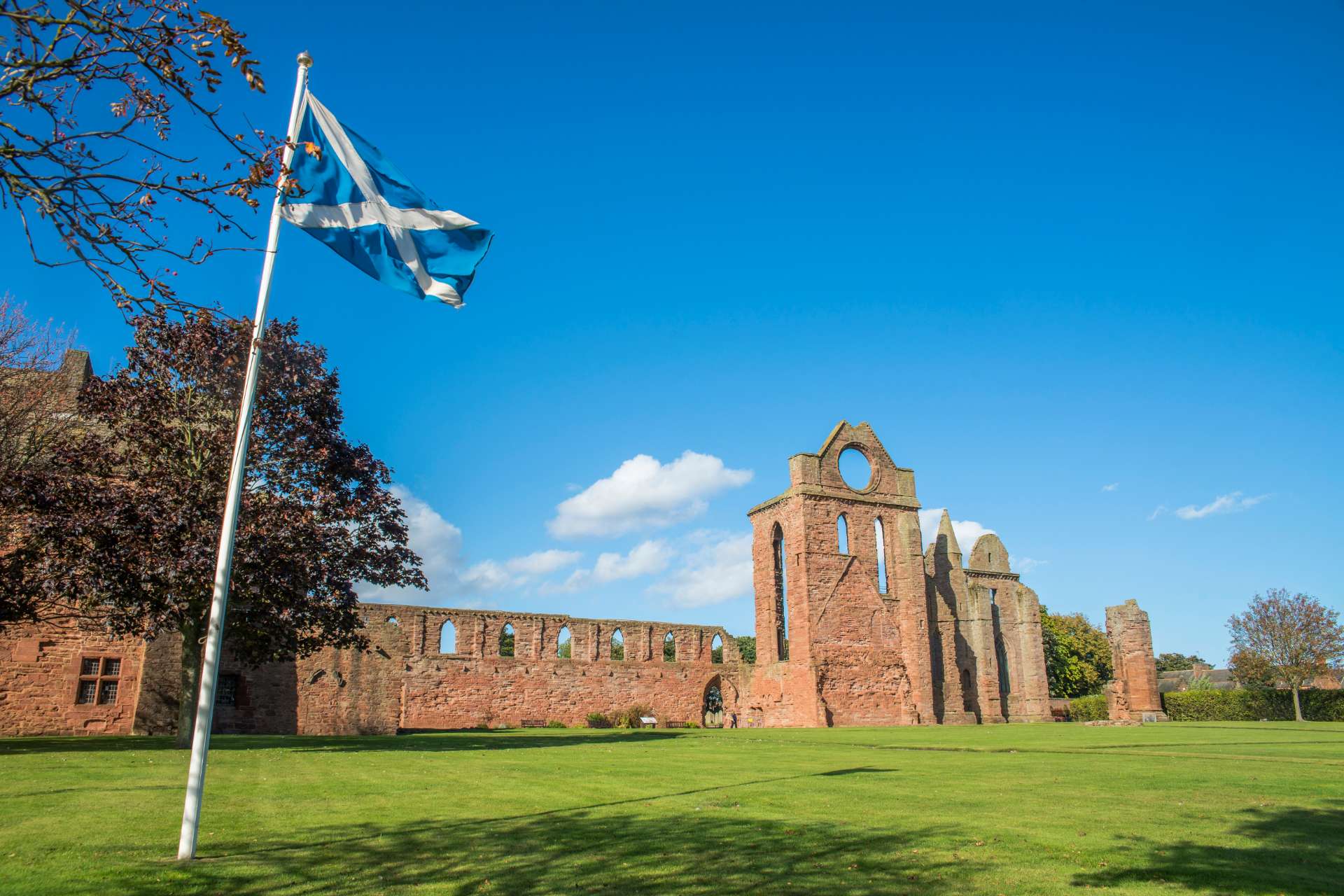 The beautiful ruined, rose-coloured Arbroath Abbey is as beautiful as it is historically significant. This is where the Declaration of Arbroath – Scotland’s assertion of independence from England – was issued in 1320. You can learn all about the history of the building and its famous document which inspired the American Declaration of Independence in the bright and modern visitor centre. While in Arbroath – one of Scotland’s most picturesque historic towns – you must try an Arbroath smokie, a Scottish delicacy comprising haddock cured slowly over a beechwood fire. You can get one at a smokery or fishmonger near Arbroath harbour, located just north of Dundee.

Lunan Bay is yet under stunning east coast beach with its own atmospheric castle. But that doesn’t make it any less extraordinary. You might even recognise it from the latest video from the Scotland Is Now marketing campaign. This magnificent two-mile strand on the quiet Angus coastline is overlooked by Red Castle, a crumbling 12th century fortress which once stood guard against invading Viking ships. Its pink sandstone hues reflect the colour of the low, red cliffs and unusually shaped rock formations on the beach below, while the sandy beach has a rosy tint which glitters in the sunlight thanks to semi-precious stones such as agate and jasper. In the shallows, you will see traditional methods for catching fish with fishing nets hung on poles staked into the sand to scoop up salmon. Please not that swimming is not advised as there are strong currents.

12 Stunning Photographs of Scotland in Autumn

7 reasons you can’t beat an autumn break in Scotland

12 Breathtaking Images of Scotland in Summer