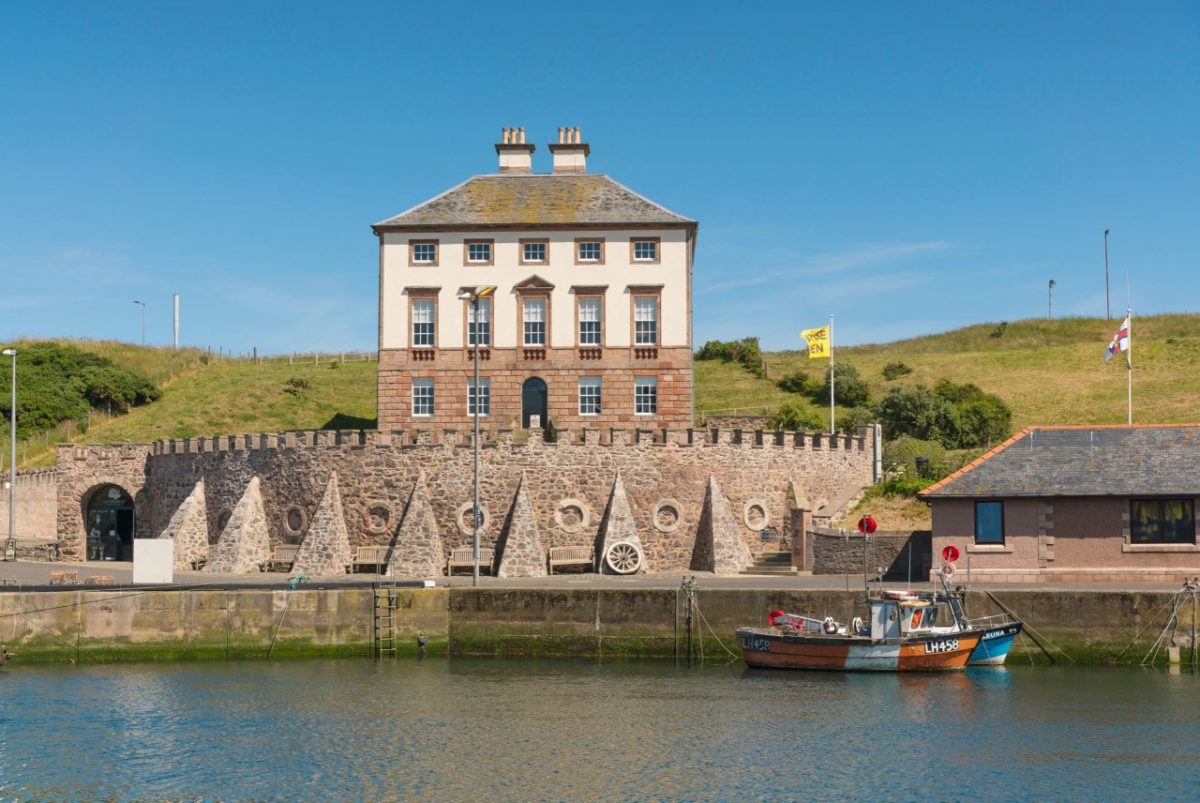 South Scotland is the perfect place to explore in Scotland’s Year of Stories 2022 . From great romances and magical legends to stories of ghosts, smugglers, Jacobites, Bonnie Prince Charlie, and other intriguing tales, so many of its attractions and stunning locations have a fascinating backstory. Here are just some of the stories behind some of the region’s most special places.

*Please remember to check the websites of attractions or contact directly to confirm opening times.* 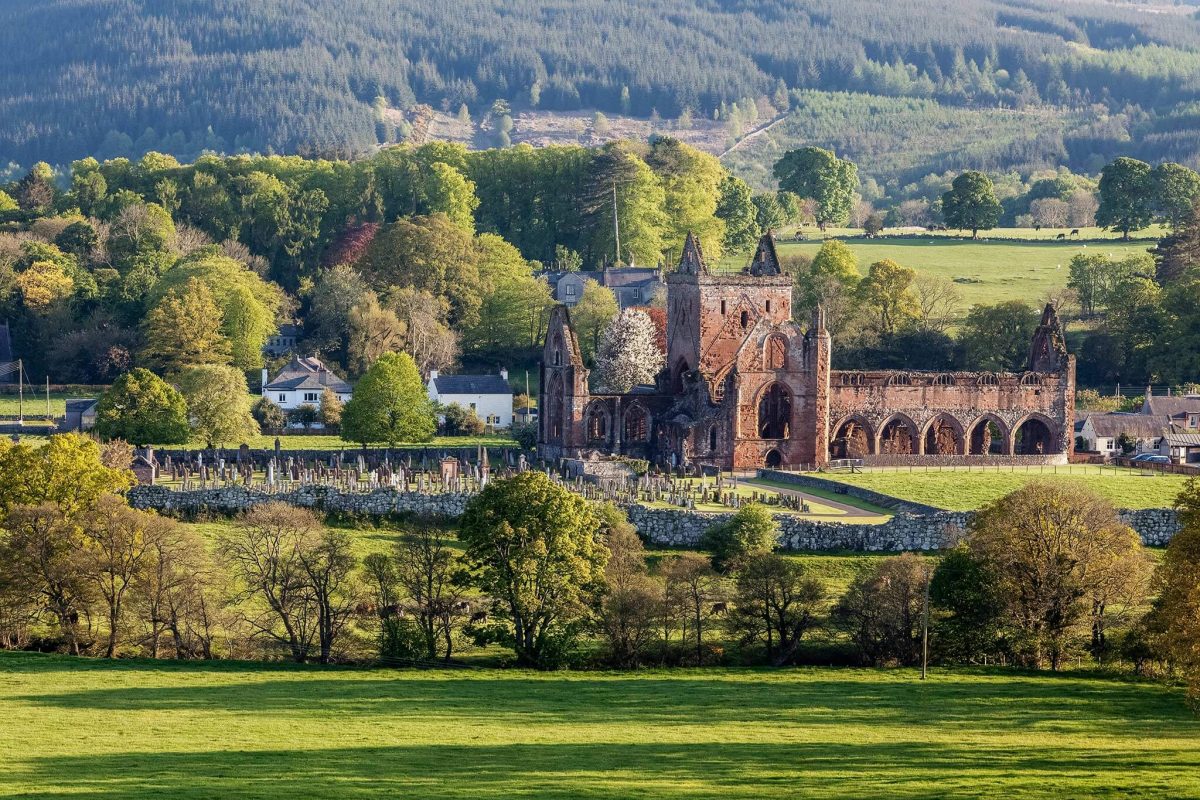 Located on the outskirts of a small Dumfriesshire village stands an enduring monument to undying love.  In 1272, Lady Devorgilla signed a charter founding a new Cistercian Abbey in memory of her beloved husband, John Balliol. Not content with erecting a magnificent abbey, Lady Devorgilla also expressed her devotion to her late husband by carrying around his embalmed heart with her in an ivory box. Upon her death, she too was interred in the abbey alongside a casket containing the heart. Soon after, the monks took to calling the abbey Dulce Cor, Latin for ‘Sweetheart’. The abbey’s new name is said to be the origin of the term of endearment that is still spoken today.

Find out more about Sweetheart Abbey.

At over 900 years old, the oldest continually inhabited house in Scotland is a truly extraordinary home. Dating from the 12th century, as many as 27 kings and queens have paid Traquair a visit, while the Stuart family have lived here since 1491. Every inch of the building, from its creaking floorboards and worn stone slabs, to its ancestral portraits and precious antiques, has a story to tell. Surprisingly, the house as fewer ghosts than you might expect. Its most haunting tale isn’t supernatural but relates to bear-topped gates which mark the end of the former driveway. These were last shut behind Bonnie Prince Charlie in 1745 as he left the house on his way south to the Battle of Culloden to restore the Stuart family to the throne. Ever since the disastrous defeat of the Jacobites at Culloden, the gates have been shut, and it is said they will remain so until a Stuart ascends the throne once more.

Learn all about Traquair House.

The Piper of Culzean Castle – A Ghost Story 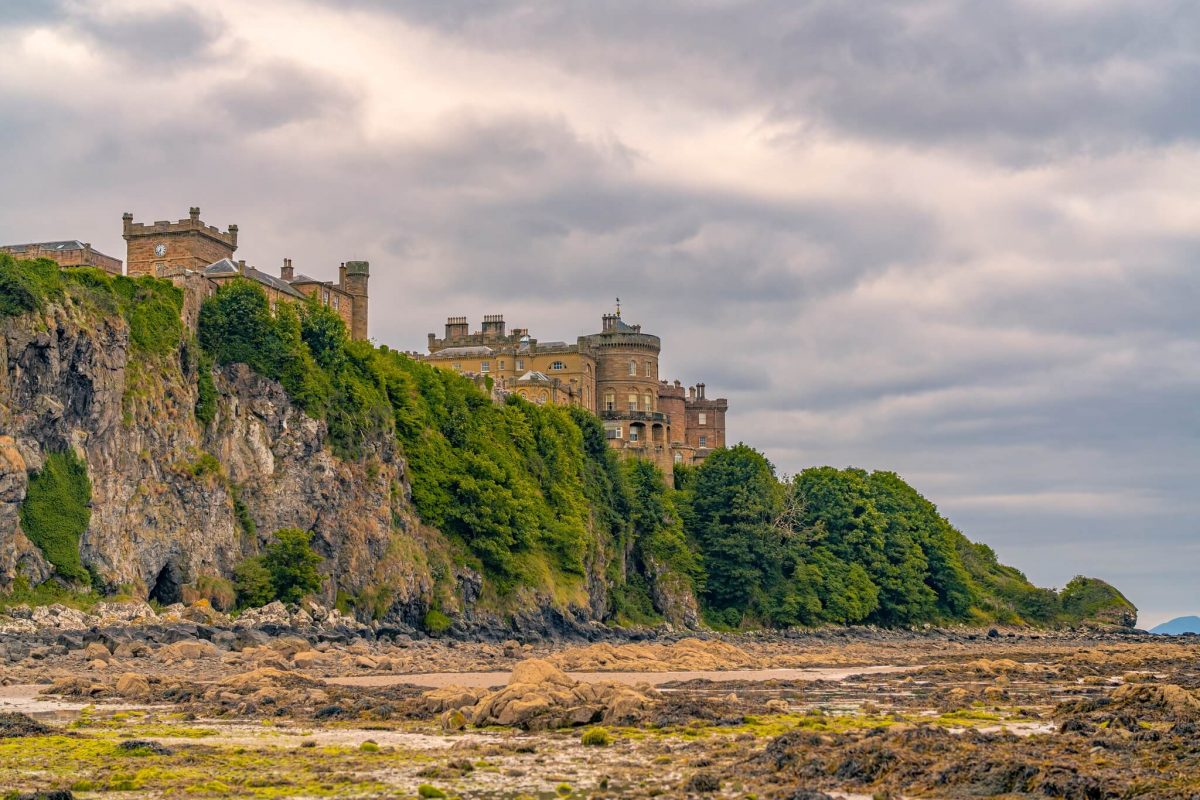 A familiar sound at weddings, Burns Night, Highland games and other festive occasions, there are some places where the distinctive drone of the bagpipes can make your blood run cold. Culzean Castle is such a place. The story goes that the caves below the cliffs of Culzean Castle are haunted. Many years ago, an intrepid piper was summoned to investigate the truth. He was to walk from the entrance of the caves, ‘skirling’ (playing) the bagpipes as he made his way inside before exiting through a tunnel at the top of the cliffs, accompanied the whole way by his loyal dog. As they disappeared into the dark hollow, the sound of the pipes grew fainter and fainter until all was silent. Neither piper or dog were heard or seen from again. That is, except on still nights when the sound of pipes is heard drifting up from the mysterious caves, the source of playing unknown. Some have even reported sightings of a lone silhouette on Piper’s Brae in the grounds of the castle. Just one of the spectral figures said to haunt this storied castle and its surrounds.

Hermitage Castle – A Dramatic Chapter in the Life of Mary, Queen of Scots 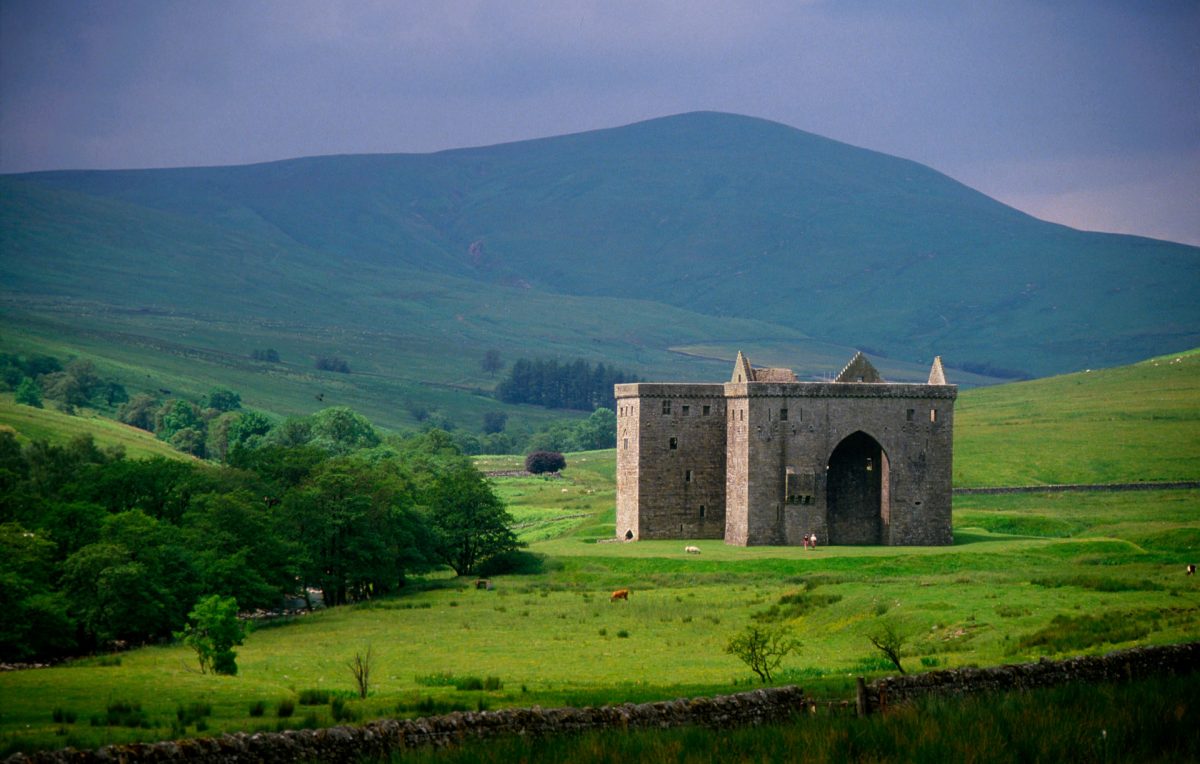 Described as ‘the guardhouse of one of the bloodiest valleys in Britain’, the brooding Hermitage Castle is steeped in myth and legend. In 1566 it was also witness to one of the most pivotal and controversial episodes in the turbulent life of Mary, Queen of Scots. James Hepburn, Earl of Bothwell, and the alleged secret lover of Mary, was badly injured in a battle with the Border Reivers, bandits from either side of the Anglo-Scots border who were notorious for cattle thieving and other crimes. While staying in nearby Jedburgh just two weeks after giving birth, Mary learned of the news and rode 25 miles over the dangerous landscape to be by his side. Hepburn would survive and the two were married, but the union triggered disaster. Enemies used her intrepid act as evidence that not only had she been engaged in an adulterous affair with Bothwell, she had also conspired in the murder of her second husband, Lord Darnley. Even more damningly, it was claimed as proof she was plotting to overthrow her cousin, Elizabeth I, ultimately sealing her doom.

Learn more about the Hermitage and the life of Mary, Queen of Scots. 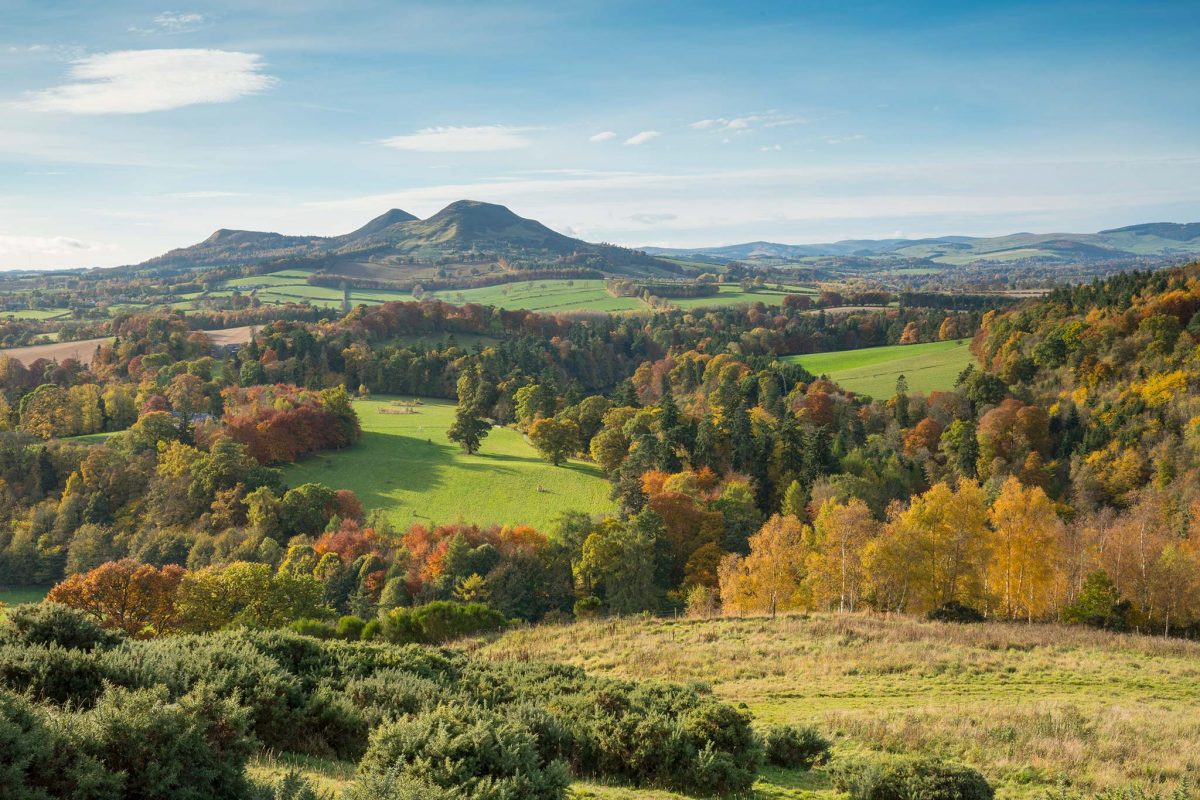 No region inspired Sir Walter Scott more than the Scottish Borders. From Scott’s View, a small lay-by on a high road near the village of Bemersyde, gaze out across a sweeping panorama. Here you can admire the land which so captivated Scott, not just for its natural beauty, but the ancient folklore which fired his childhood imagination. From Scott’s View you can see Eildon Hill, connected to a historic 13th century figure, Thomas the Ryhmer, a balladeer and mystic with the gift of prophecy. The story goes that Thomas owed his supernatural powers to the Queen of Elfland who whisked him away to her fairy realm inside the hollow interior of Eildon Hill. There he remained for several years and was granted the gift of foresight. When he returned to the mortal world, he found he could no longer lie but could predict the future, including many important events in Scottish history. Now immortal, he returned to Eildon Hill where he still resides. This is just one of the tales collected by Scott, published in his anthology of Borders folktales, Minstrelsy of the Scottish Border.

Visit Scott’s View and his ancestral home of Abbotsford.

If walls could talk at Gunsgreen House, they would tell countless tales of 18th century intrigue when the Berwickshire coast was rife with smuggling. One of the most notorious smugglers of the era was John Nisbet who built this elegant property, designed by the great architect John Adam, with the proceeds of his illegal activities. Among Gunsgreen’s secrets are underground tunnels, a chamber beneath the floorboards where the owner would hide from excise officers, and a secret chute hidden behind a disguised hatch used by Nisbet to conceal tea – a highly taxed and precious commodity, which he would sell in tiny packets to customers from his parlour. Even the windows in the high-ceilinged drawing room were strategically placed to give a bird’s eye view of the harbour so smugglers could signal to one another under cover of darkness by lantern.

Visit the Museum at Gunsgreen House.

The grounds of the Barony Castle Hotel might appear like those of any other grand country house. But take a closer look at the collection of lichen and moss-covered boulders in a field and discover something special – a huge terrain relief map of Scotland, the largest of its kind in the world. The story of how it came to be is a moving one. During World War II, Jan Tomasik, a Polish sergeant with the armoured division, was stationed nearby to help defend the country. At the end of the war, Tomasik bought Barony Castle and turned it into a hotel. Interested in topography, Tomasik wanted to express his thanks to his adopted country in the best way he knew how. Thus, the Map of Scotland, or ‘The Great Polish Map of Scotland’ as it is known, was born. Restored in 2010, the map is epic in scale, measuring over 160 feet by 130 feet, and remains a remarkably accurate model of the Scottish landscape.

Visit the Great Polish Map of Scotland and stay at the Barony Castle Hotel.

Discover more about Scotland’s Year of Stories 2022 and more places you can explore in South Scotland. Explore Green Tourism awarded properties in the Scottish Borders and Dumfries & Galloway, or check out these 18 ideas for great places to stay when touring South Scotland.

10 of the Best Tours to Take in Scotland

12 Top Things to Do in Moray Speyside

Meet the Natives – Scottish farm animals and where to see them

6 Cosy Places to Stay with a Log Fire This Winter