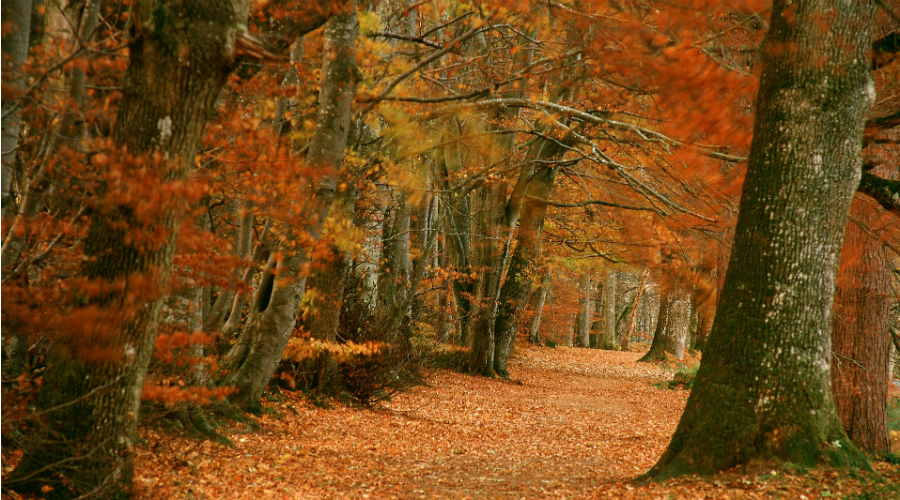 The temperatures might be cooler and the days shorter, but that doesn’t mean you can’t get out and about and have fantastic new experiences. In fact, autumn might be the best time to experience Scotland. Say hello to crisp air, cosy wool knits, technicoloured autumn leaves, and nights spent in front of wood-burning stoves.

Here are seven reasons why you can’t beat an autumn break in Scotland.

Stay in a gypsy wagon

Where: Melrose, The Scottish Borders

Can you imagine a more bohemian choice of accommodation than a roulette? Hunker down in one of the eight traditional gypsy wagons belonging to Roulette Retreat set in a meadow at the base of the mystical Eildon Hills. Adorned with beautiful Arab, Asian and Celtic designs, a roulette retreat is one of the most unique (and warmest) places to spend a revitalising autumnal break. Handcrafted in France and Holland, these timber havens boast an array of modern comforts and luxury quirks including Japanese-style eco hot tubs, crackling wood stoves and beautifully upholstered vintage furnishings. At night, step outside and gaze at an inky-black sky filled with twinkling stars.

Discover other unique places to stay in Scotland.

Spot the Northern Lights on the Isle of Skye

The Isle of Skye one of Scotland’s most iconic locations. Unfortunately, this means that parts of the island become quite busy during the summer months. Escape the congestion and visit in autumn in time to witness one of the most dramatic natural phenomena on earth – the Aurora Borealis. Head to the most northerly point on the island, the Trotternish Peninsula, where you have the best chance of seeing them. During the day, lace up your walking boots and wander empty white beaches like the one at Torrin and the idyllic shore of Loch Dunvegan. If it gets a bit chilly, head indoors for a seafood lunch in one of the area’s excellent restaurants. The Loch Bay Restaurant is famous for its cockle, mussel and squid broth.

Tip: Download the Glendale Skye Aurora Alerts App for real-time updates on the location and progress of auroras as they develop.

Learn more about the Northern Lights in Scotland.

Now is the time of year to curl up with a good book. Stockpile your book collection in Wigtown, officially designated Scotland’s National Book Town in 1998. Discover a bookworm heaven home to a myriad of booksellers spanning all kinds of genres and interests. Get lost inside The Bookshop, Scotland’s largest second-hand book shop, and browse nearly a mile of shelving housing an encyclopaedic choice of titles. Get your hands on sparkling-new first editions from Number 11, delve into the extensive world mythology and Scottish folklore collection at Byre Books, and tuck into freshly made sandwiches and homebaking at ReadingLasses Bookshop & Café, the only book retailer in Scotland dedicated to women. Wigtown even hosts its own book festival, held every autumn.

The next Wigtown Book Festival takes places from 25 September to 4 October and promises a stellar line-up of high profile writers and guest speakers from the worlds of politics, sport and media.

Find out more about Scotland’s literary heritage and attractions.

Pick your own pumpkins

Get into the spirit of Halloween on a pumpkin picking trip. This American tradition is steadily gaining popularity in Scotland and there now plenty of places where families can choose their own pumpkin to take home. One such place is Arnprior Farm near Stirling. More than 5,000 pumpkins are grown across two acres at this family-run farm and come in a variety of sizes perfect for making jack-o’-lanterns, delicious soups or a decorative seasonal tableau. Stay for an afternoon for plenty more family-friendly fun in the form of a six-foot kale maze, a bale mountain, alpaca trekking and chainsaw carving. There will be lots of local food and drink to try too.

Check out our farm stays and holidays in Scotland.

Where: Edinburgh and Kingsbarns, Fife

Samhuinn or Samhain is a festival in the ancient Gaelic calendar which celebrates the end of the harvest season and the advent of winter. Along with the Stonehaven Fireballs Festival and Up Helly Aa in Shetland, it is one of the great fire festivals held in Scotland which has pre-Christian origins. The Samhuinn celebrated today is a fun, carnivalesque affair which can best be described as a cross between Bonfire Night and Halloween. The biggest Samhuinn Fire Festival is held by the Beltane Fire Society at the top of Edinburgh’s Calton Hill on Halloween. Watch as revellers covered in ‘Pictish’ body paint and dressed in amazing costumes, along with fire entertainers, drummers and musicians, re-enact the dramatic clash between the mythical summer and winter kings which ushers in the new season.

For a more family-friendly affair, attend the annual Samhain Fire Party at Cambo Gardens in Fife. Channel your inner druid and make your own willow lantern to help guide your way to the secret bonfire.

Photograph the autumnal splendour of the Cairngorms

Scotland in autumn is a dream for photographers to shoot. One of the best places to enjoy the Scottish autumn in all its glory is in the Cairngorms National Park. It is here that acclaimed conservation photographer Peter Cairns runs his Autumn Gold photography retreat in October. Whether you’re an experienced photographer or a budding enthusiast, learn how to properly capture the rich autumnal hues, magical light and constantly changing moods of the Highlands. Shoot the park’s pine forests, secluded glens, undulating moorlands, mist-shrouded mountains, and fiery sunsets. Accommodation, meals and transport to and from Kingussie Rail Station are included.

See how Scottish cider is made

Nothing quite captures the essence of the season like a chilled glass of crisp apple cider. Pay a visit to Waulkmill Cider in the Eskdale Valley and take a tour of Scotland’s only commercial craft cider and perry makers. Learn how Waulkmill transforms over 20 varieties of locally grown apples and pears into the raw and unpasteurised vinegar. This produces their uniquely flavoursome cider which is free from artificial yeasts and additives. You can also sign-up for a cider-making course and learn how to make your own brew at home.

Cairn O’Mhor, a craft winery located in Perthshire, is another independent cider-maker which offers tours. Go behind the scenes and find out how its sparkling wines and bottled ciders are traditionally produced and fermented using locally harvested fruits. Don’t leave without a trying the 100% ‘Pictish’ Draft Cider on tap.