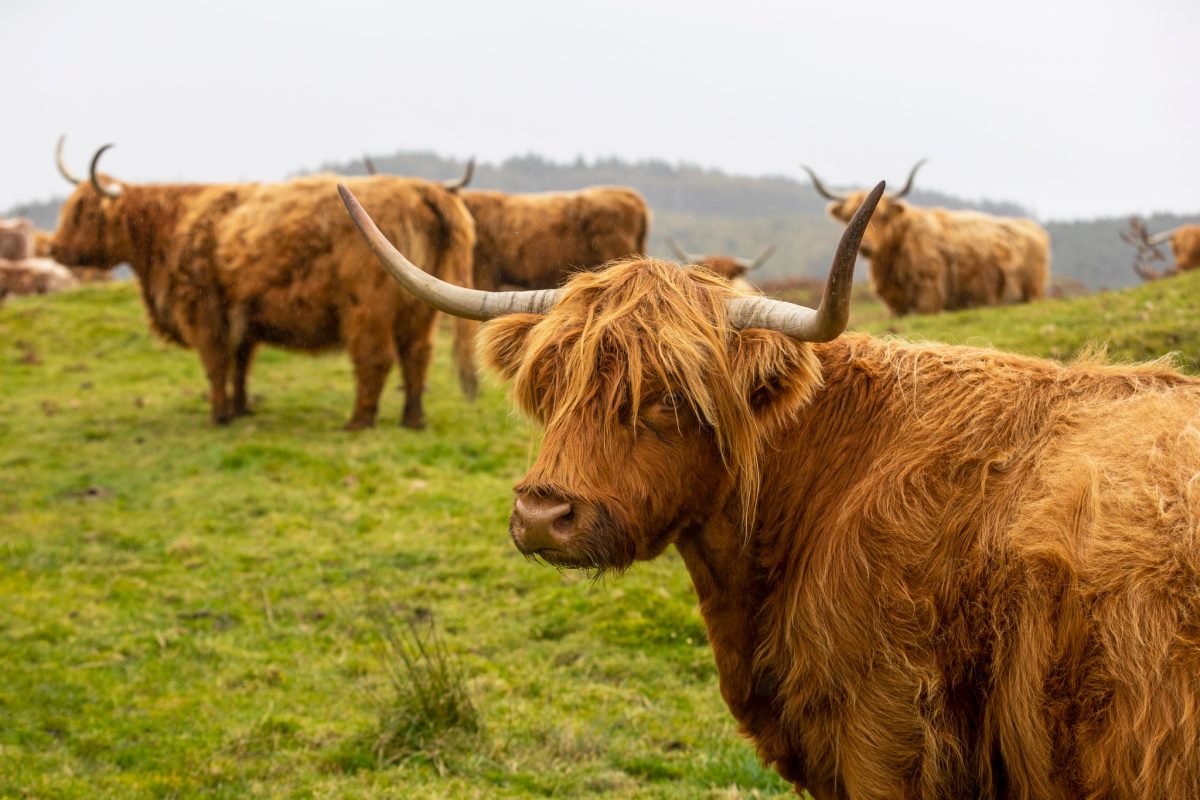 If we asked you to name a Scottish native farm animal perhaps the most popular answer just might be a Highland Coo? Read on to discover some more traditional Scottish breeds whose heritage reflects Scotland’s varied landscape and its climate. Many you can still see on a visit or stay on a Scottish farm, some are a little rarer – but not as quite as hard to spot as a Haggis! Here’s our guide to some of our historic native breeds but there are many more animal, wildlife and food and drink experiences to enjoy when out on a Scottish farm.

Let’s start with the oldest registered breed of cattle in the world. The Highland Coo originated in the Scottish Highlands and Western Isles of Scotland. First mentioned in the 6th century A.D., the breed is known for its long, thick hair and its hardiness in harsh conditions. In Scottish Gaelic, they are known as Bò Ghàidhealach and in Scots, they are called Heilan coo.

There are many farms across Scotland where you can see and “meet” Highland cows to find out more about their excellent temperament and conservation grazing. Take a farm trailer tour with Kitchen Coos & Ewes or see them on a Highland hill on a Farm Buggy Tour. Grab that perfect insta-snap at Aberdeen Highland Beef.

Ah waking up to the view of a herd of Highlands! It’s not just a dream many farms have a great range of accommodation from cosy cottages, shepherd huts and bothies to unique designed self-catering options, where you can combine a great stay with your love of a Highland coo!

You can spot many Highland Coos on your travels across Scotland where you’ll see them on many farms, estates and country parks. But for now enjoy our coo cam.

Staying with gentle giants, the Clydesdale is a Scottish breed of draught horse. It is named after its area of origin, the Clydesdale or valley of the River Clyde, Lanarkshire. At Blackstone Clydesdales you can groom or you can try your hand at riding or driving them. If you are staying on Blairmore Farm in Perthshire say hello to their four Clydesdales, who you can see grazing from your accommodation. You can see both Highland cows and Clydesdales at Pollok Country Park in Glasgow.

If you’re looking for a chance to see these beautiful horses, then you’re in luck! Making its Scottish debut, P&J Live in Aberdeen will be hosting the World Clydesdale Show from the 20 – 23 October 2022. Having previously been held in the US, the show will be travelling across the pond to Scotland, home of the Clydesdale Horse. This 4-day spectacular event will treat audiences to a variety of classes – from in-hand to driving and ridden, a fabulous selection of equine supplies and country living goodies to buy and locally sourced food & drink products to indulge in.

Another canny (that’s Scot’s for gentle) breed is the Highland Pony. The Highland Pony is one of the three native breeds of  ponies from the Scottish Highlands and Islands, the others are the Shetland Pony and the Eriskay Pony. Highland ponies have thick winter coats enabling them to live in harsh weather conditions.

The Eriskay Pony comes from the Isle of Eriskay in the Outer Hebrides, Its origins are ancient, with roots in Celtic and Norse breeding and it is physically similar to drawings of ponies on ancient Pictish stones found in north and west Scotland. The Eriskay is rare, its population is considered to be at critical status by the UK-based Rare Breeds Survival Trust. You can see Eriskay ponies at Doonies Rare Breeds Farm, near Aberdeen, which has one of Scotland’s largest collections of rare and endangered farm animal breeds and is nationally recognised as a breeding centre for rare breeds.

Shetland’s unique climate and landscape is home to a number of distinctive breeds. Most well-known is the iconic Shetland Pony, which you’ll see grazing across the islands. But you’ll also find Shetland cattle, which have miniature “Viking” style horns. You can see them across Scotland including Trossachs Yurts on Moss-side Farm within the Flanders NNR in Stirlingshire.

While Shetland Sheep are a small, hardy sheep which produces the fleece for Shetland wool. See them in their natural habitat at Garths Croft, on the island of Bressay, Shetland which specialises in native and heritage rare breeds.

Soay sheep have a black, blonde or brownish fleece and are a shy, small, agile sheep which come from the island of Soay in the St Kilda Archipelago. Also from this area are Boreray Sheep, which are used for conservation grazing. They shed their fleece naturally and in the past their wool could be used for yarn for tweed.

You’ll find North Ronaldsay sheep are still mainly found on their native island, in the Orkneys. They have evolved to thrive from eating seaweed and living on the beach, enclosed on North Ronaldsay by a unique stone dyke, that was built in 1832 and encircles the entire three mile-long island. They even have their own Sheep Festival.

These small, black sheep, which can often have two distinctive sets of horns, are popular across Scotland. If you are staying on a farm break at Guardswell Farm in Perthshire or Old Leckie Farm in Stirlingshire, make sure you say hello to them.

Luing cattle (pronounced ling cattle) were bred on the island of Luing in the Inner Hebrides of Scotland by the Cadzow brothers in 1947, whose family still farm on the island. Their aim was to produce a good beef cow with the ability to raise a calf under adverse weather conditions. Luings were the first new breed of cattle developed in the UK in over 100 years and were officially recognised as a breed by the British government in 1965. Today you can see them across many parts of Scotland including at Fearn Farm in the Highlands where you just might see them in the views from your accommodation.

The Castlemilk Moorit is a rare breed of domestic sheep originating in Dumfries & Galloway. It was created as a decorative breed in the 1900s to adorn the parkland of Sir John Buchanan Jardine’s Castlemilk estate. They are named after the estate and the Lowland Scots word ‘moorit’ which refers to the light tan or reddish-brown colour of their fleeces.

Staying in the south of Scotland, meet the distinctively marked black and white Belted Galloway cattle. Think along the lines of a panda but in cow form! They are derived from the Galloway cattle of the Dumfries and Galloway region of south-western Scotland and are adapted to living on the poorer quality upland pastures and windswept moorlands but are well known to live to a ripe old age in cattle years! See them at Wark Farm in Aberdeenshire where they have been part of farm conservation for over ten years helping manage the wildlife wetlands and wildflower meadows habitats.

Many a pint of milk may have come from this breed of dairy cattle from Ayrshire in southwest Scotland. They are recognised by their brown and white markings. Sipping a barista coffee in Glasgow café the milk may just have been sourced from Mossgiel Farm and their herd of Ayrshire Cattle. If Mossigel farm sounds familiar it is where Scotland’s National Poet – Robert Burns – lived between 1784 and 1786 and its where he wrote ‘To a Mouse’.

Known across the world, the popular Aberdeen Angus breed (or often just an Angus as it is known internationally) derives from cattle native to the counties of Aberdeenshire and Angus in the north-east of Scotland, known locally as ‘doddies’ and ‘hummlies’. Where better then to meet them at their home county of Angus at Newton Farm Holidays. Or at Hugh Grierson Organic in Perthshire or Peelham Farm in the Scottish Borders see first–hand a pedigree herd and find out why they produce the most tender steak.

Across the heather clad hills of Scotland, you’ll often see flocks of Scottish Blackface sheep. They are the most common breed of sheep in the UK, interestingly the breed originated south of the border. Looking for a change of scene? Then head to Eastside Farm, a working sheep farm within the Pentland Hills Regional Park. Surrounded by rolling hills dotted with blackface sheep, you really will be counting sheep to fall asleep. During Springtime, Lennox of Lomond offers lambing experience tours with their Scottish Blackface sheep.

If you’ve been tuning into the recent BBC series This Farming Life you may be familiar with the North Country Cheviot sheep seen on Joyce Campbell’s Armadale Farm in Sutherland, on the north coast of Scotland. In 1791, Sir John Sinclair brought ewes (that’s female sheep) from the Cheviot Hills near the English border to the counties of Caithness and Sutherland and named these sheep “Cheviots” after the Cheviots hills. They are now a popular breed across Scotland. You can see them during a stay at Cowden Farm near Drumlithie, Aberdeenshire, an area that was inspirational to Scots writer Lewis Grassic Gibbon penning Sunset Song, a story that encapsulated farming life.

Find out more about Scottish Farm holidays and day trips and enjoy being outdoors in Scottish landscape and meeting those who work and care for it.

12 Top Things to Do in Moray Speyside

6 Cosy Places to Stay with a Log Fire This Winter

8 Reasons to Choose Scotland For Your January Break

21 Farm experiences to try in Scotland this Autumn