As we go about our daily routine (or daily grind depending on your point of view!) our thoughts may wander to fond memories of past holidays, or with a rush of inspiration to plan the next trip.

If you’re looking for a relaxing break full of great experiences that don’t break the bank and are easy to get too, or if you’re thinking of somewhere that you’ll feel fulfilled on every level – mind, body and soul, why not visit Perthshire?

In the heart of Scotland, it’s up to you to tick the boxes that work for you, but read on for some exciting ideas on how you can Live Life Well in Perthshire. 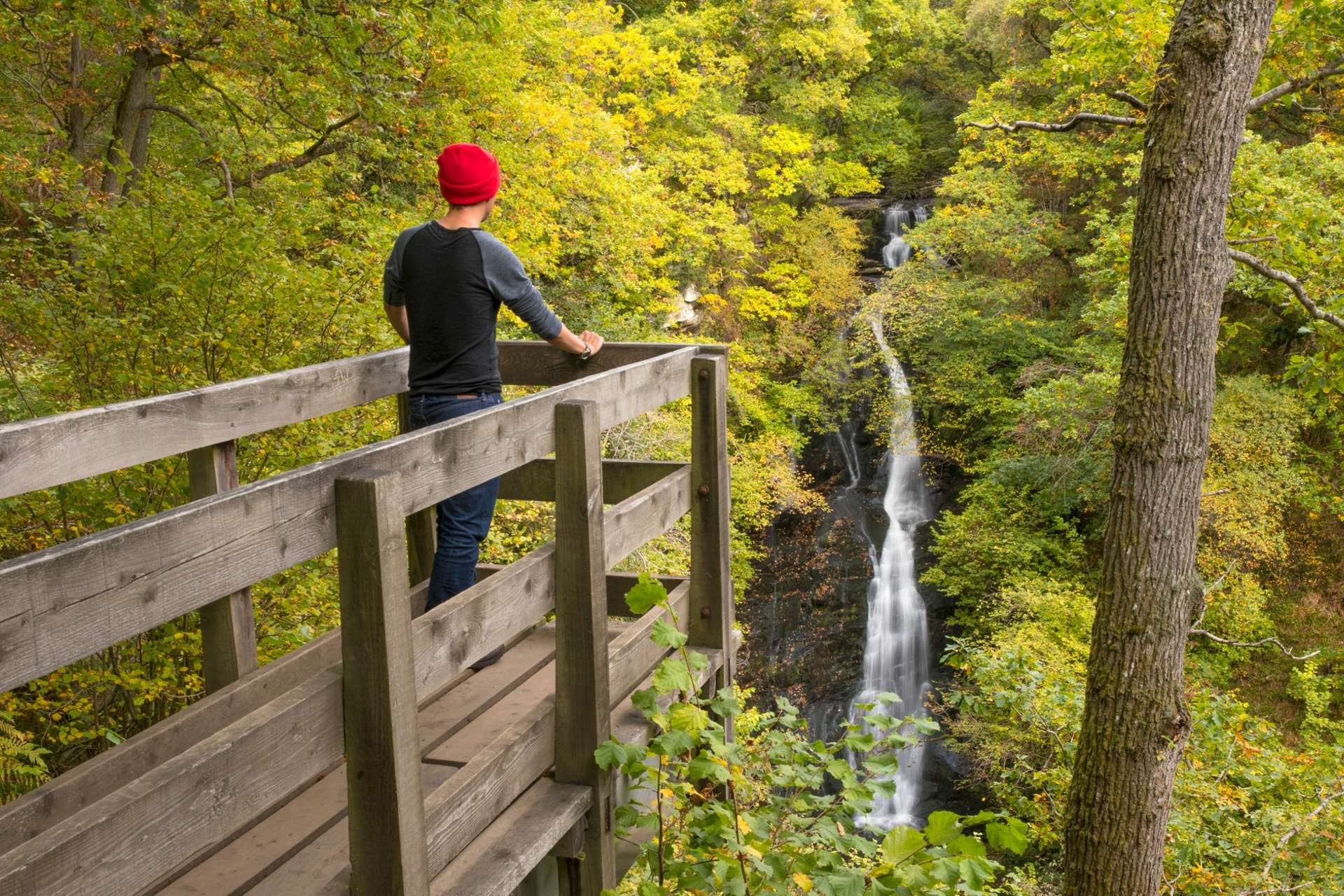 The invigorating fresh air, amazing scenery and breathtaking landscape is quite intoxicating and is only an hour drive from Edinburgh or Glasgow. See sparkling lochs and fast-flowing rivers, a sprinkling of lofty hills and Munros (hills over 3,000 ft/915 m), wildlife and towering forests, providing ample options to reconnect to nature.

Add in some tasty Scottish food and drink, welcoming accommodation – choose from something quirky, luxurious or just a good bed for the night – friendly folk and a short flight, easy drive or fast train journey, to arrive in Scotland’s ‘Big Tree Country‘. 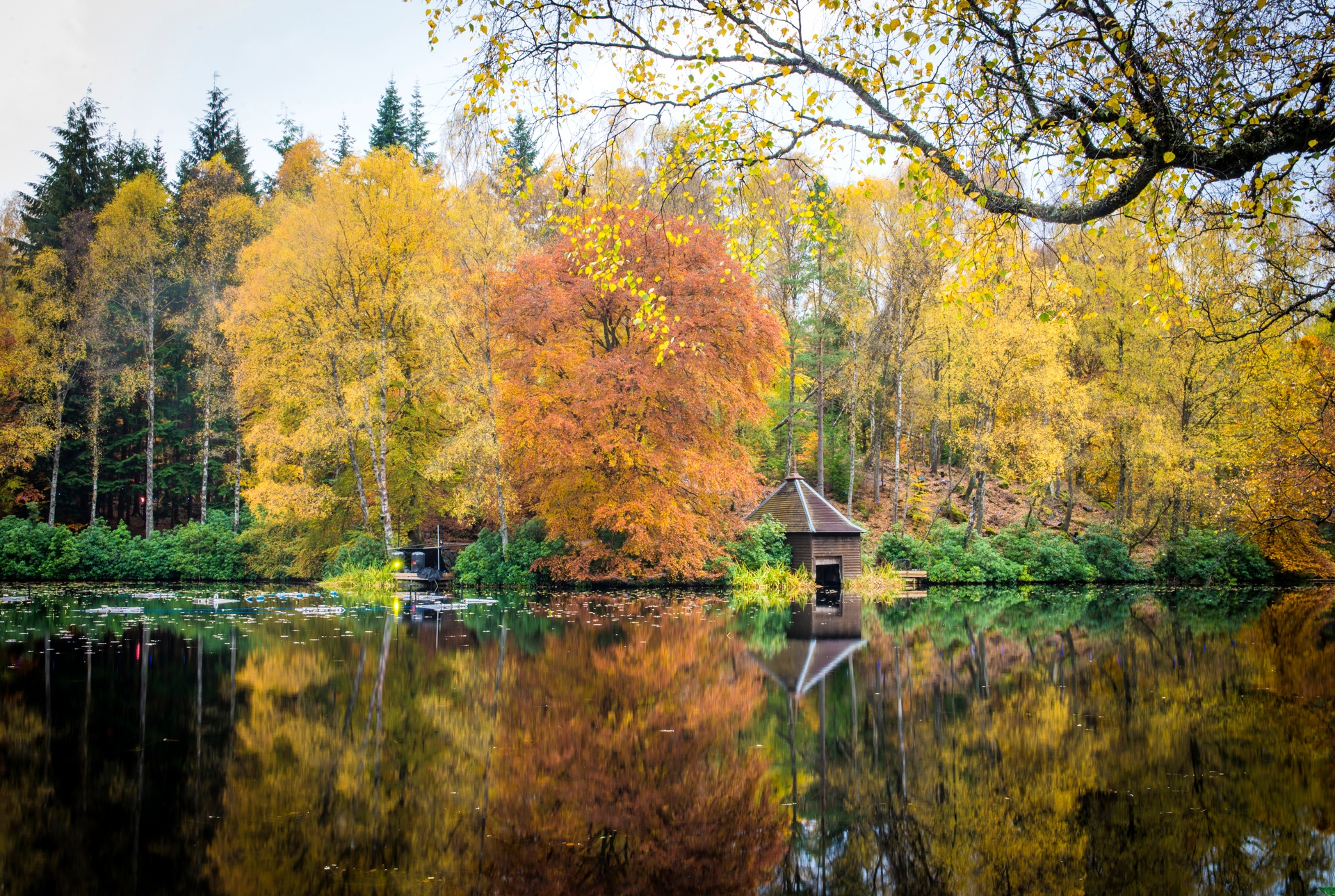 Perthshire is home to more than 200,000 acres of woodlands and includes some of the oldest and tallest trees in the UK, which have inspired musician’s, writers and artists. No matter what the season, you can enjoy an ever-changing palette of colours here. From autumn’s golden hues to spring’s bluebell blanket, winter’s white and summer greens. It offers the perfect setting to enjoy getting out and about or simply soaking up the amazing views as you gently unwind. 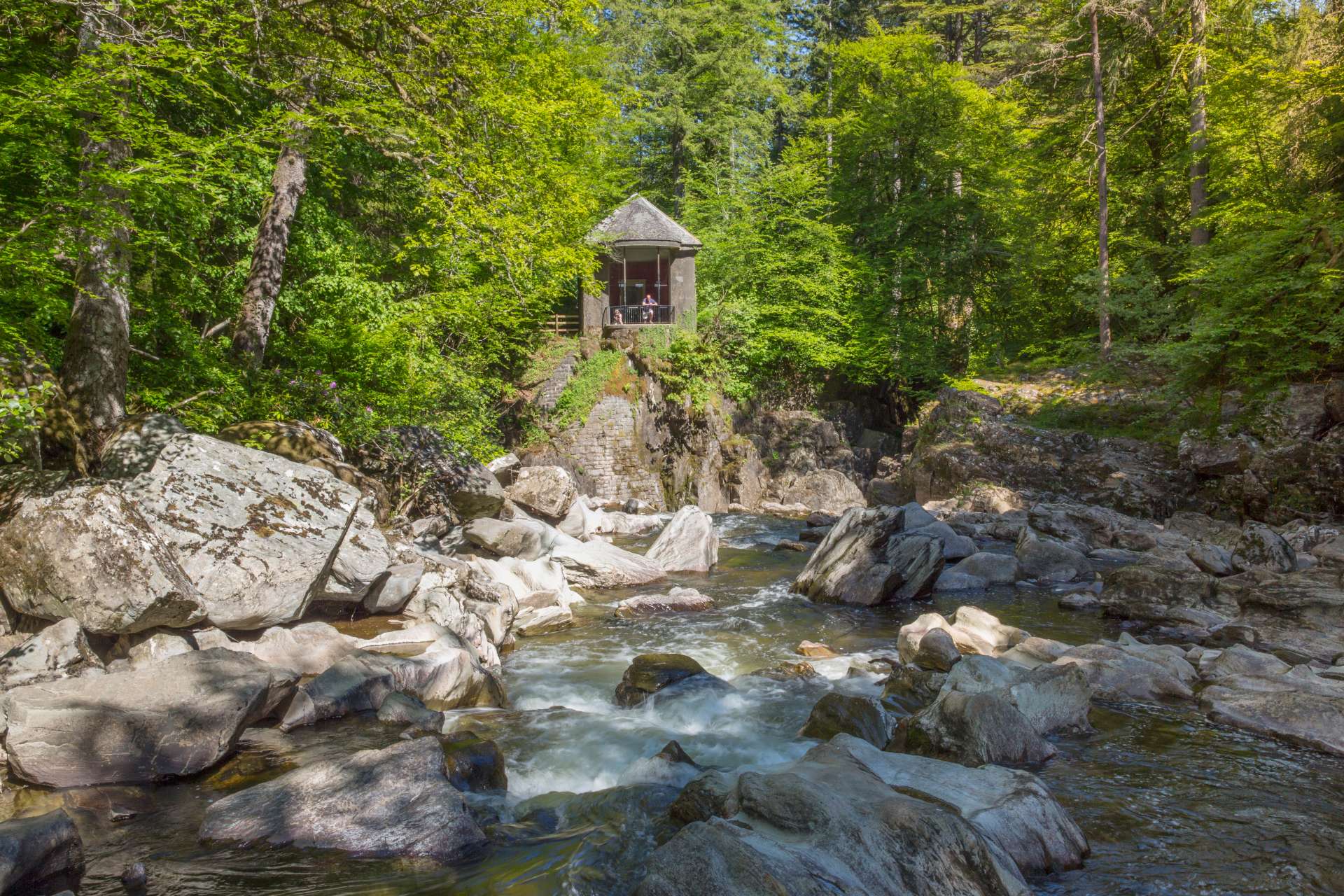 The Hermitage, Craigvinean Forest, near Dunkeld

Craigvinean is Scotland’s oldest managed forest, which was grown from seeds sown by the nature-loving ‘planting Dukes’ of Atholl. There’s also a wild ‘tree garden’ at the Hermitage where you’ll find Black Linn Falls, the Falls of Braan and secret romantic Georgian follies– definitely food for the soul!

Adventurers are very welcome in Perthshire, with plenty of activities to choose from fast or slow. There’s bungee jumping for the not-so-faint-hearted, woodland walks on epic trails through towering trees, or white-water rafting on the Rivers Tay (Scotland’s longest), Tummel and Braan. For something a little bit different, why not try a night kayaking trip with Outdoor Explore? Or explore Loch Tay with a Highland Safaris boat trip and hear about its myths and legends and perhaps spot some wildlife.

Perthshire is home to 28 of Scotland’s 282 Munros, so whether you are a seasoned hillwalker or looking to start Munro-bagging, there’s a hill with a great view waiting for you. One of Scotland’s Great Trails, the Cateran Trail, is a fully waymarked, 64 mile/103 km route that runs through east Perthshire and into the Angus Glens. This circular route is split into five stages and follows old drove roads and tracks through farmland, forests and moors. 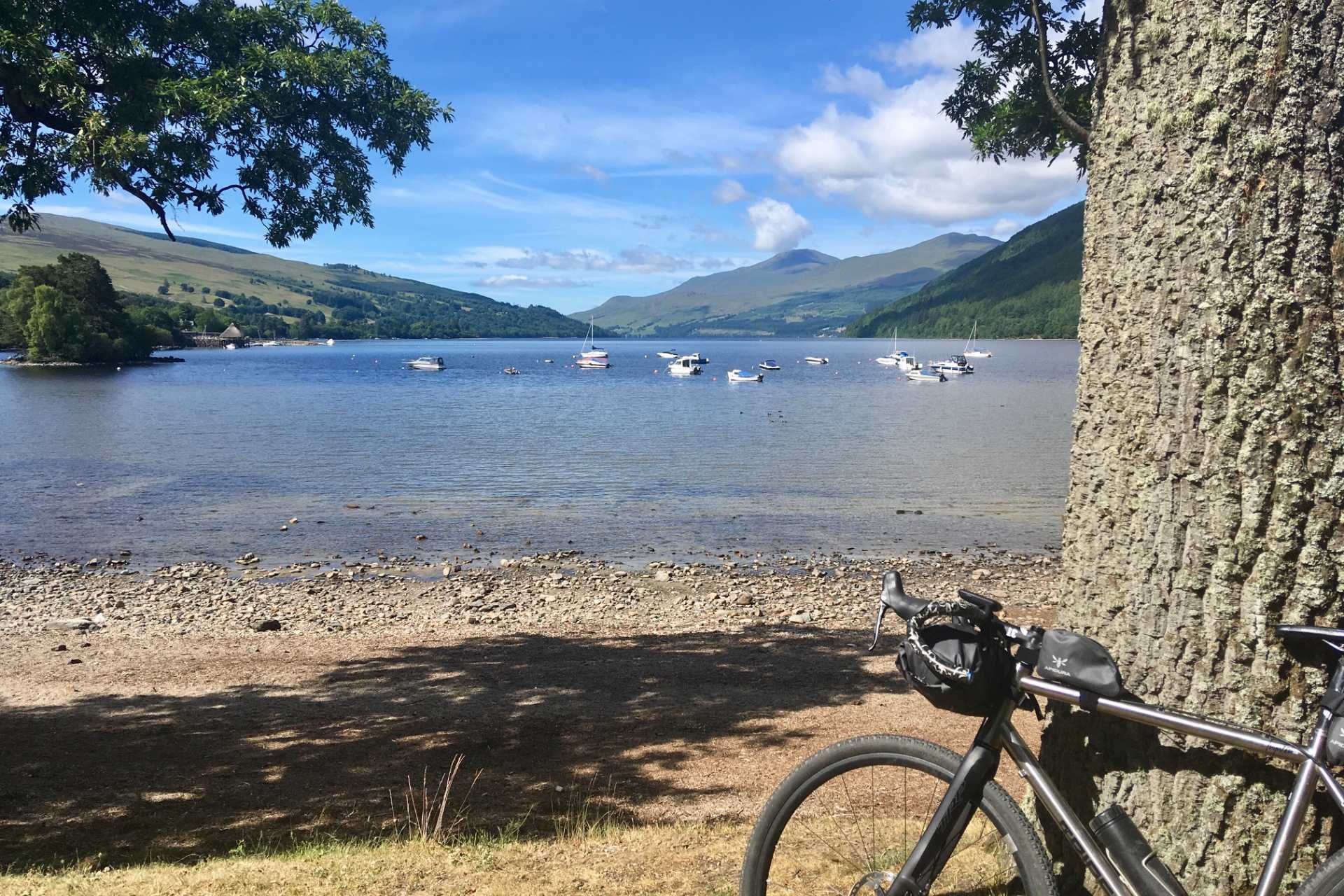 Cycling with a view at Loch Tay

Cycling and mountain biking opportunities are plentiful too with two national cycle routes crossing the region. ‘The Salmon Run’, or NCN77, follows the fish up the River Tay for 54 miles from Dundee to Pitlochry, mostly on quiet roads. While NCN7 – Lochs & Glens North, in part runs along flat tracks, making it perfect for adventurous families. It passes through stunning scenery to Rannoch, where you’ll find Britain’s most remote train station. You might even recognise this location from Danny Boyle’s epic Trainspotting, which starred Perthshire-born Ewan McGregor. 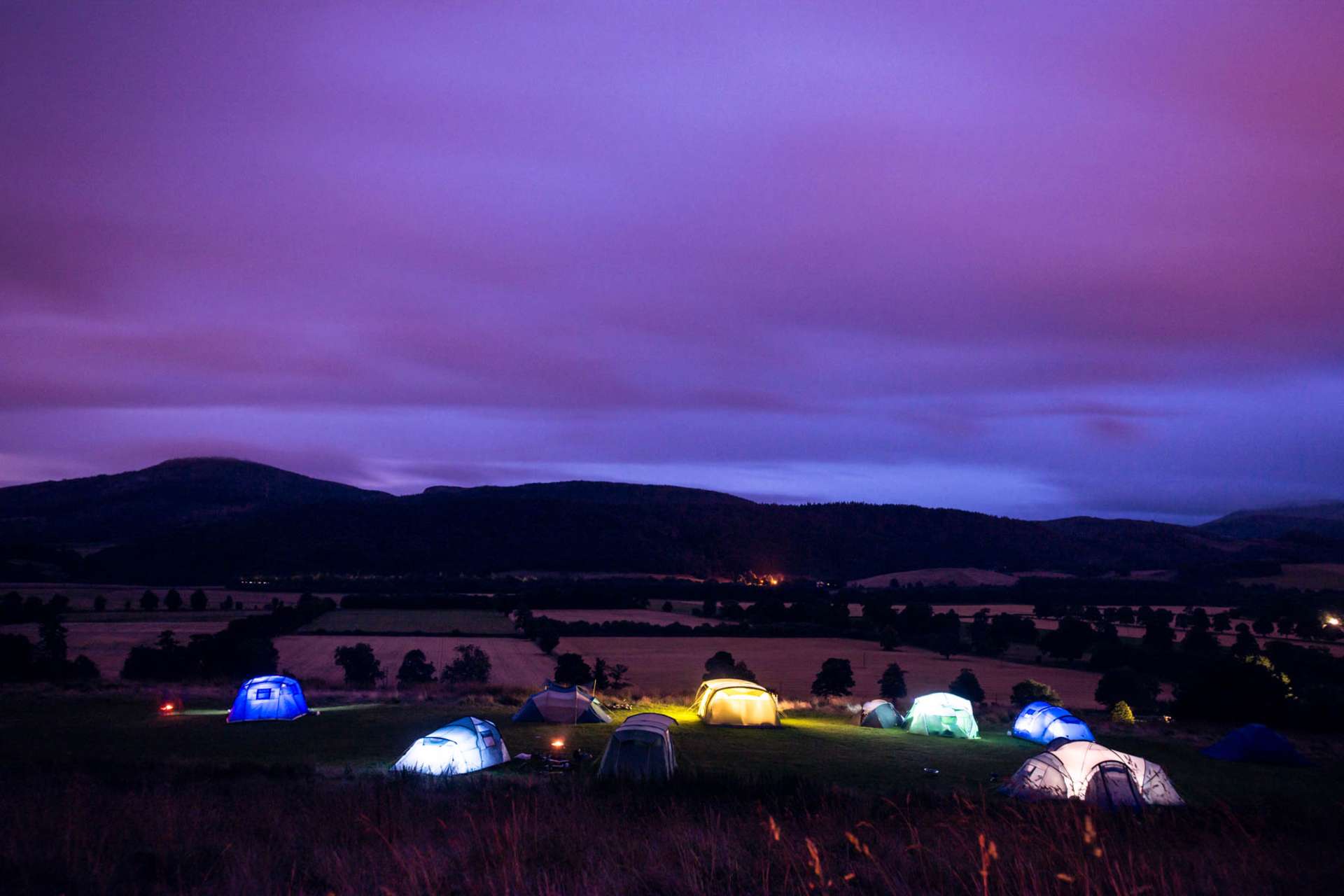 Close to McGregor’s childhood home of Crieff, is Comrie Croft, who provide a great mountain biking day out for all the family, complete with beginner to advance trails. If you are looking to stay here, why not try a Kata or eco-camping (very close to wild camping but with facilities close by) with a guaranteed view and the possibility of falling asleep to the sound of deer or owls outside?

Cateran Ecomuseum, can be described as a ‘museum without walls’ which tells the story of the people, places and landscapes of the area. There are a selection of itineraries to help you make the most of your self-guided tour, exploring Neolithic sites, Pictish Stones, and stories from the legends of King Arthur and the Irish giant, Fionn Mac Cumhaill.

Enjoy the peace and tranquility that can be found in a library, with a twist of Scottish heritage. You can find out what books your ancestors perhaps read at Innerpeffray Library, near Crieff, Scotland’s oldest free, public lending library. It’s a museum where you can literally touch the past, and there’s also a new heritage trail if you fancy a short walk by the River Earn.

If immersing yourself in a good book is how you unwind then look no further than the Aberfeldy Watermill Bookshop, Gallery & Cafe, located in a former oatmeal mill in the picturesque town of Aberfeldy. It is acclaimed in the New Yorker book of 75 Greatest Bookstores in the World!

The landscape across Perthshire has been inspirational to many a writer. The Birks of Aberfeldy  were named after a poem of the same name by Scotland’s national bard, Robert Burns. The birks (from the Scots for birch trees) overlook the Falls of Moness, a spectacular waterfall, and line the slopes of the Moness gorge. Children’s author, Beatrix Potter, also often stayed in Dunkeld & Birnam with the local landscape and wildlife inspiring her stories. 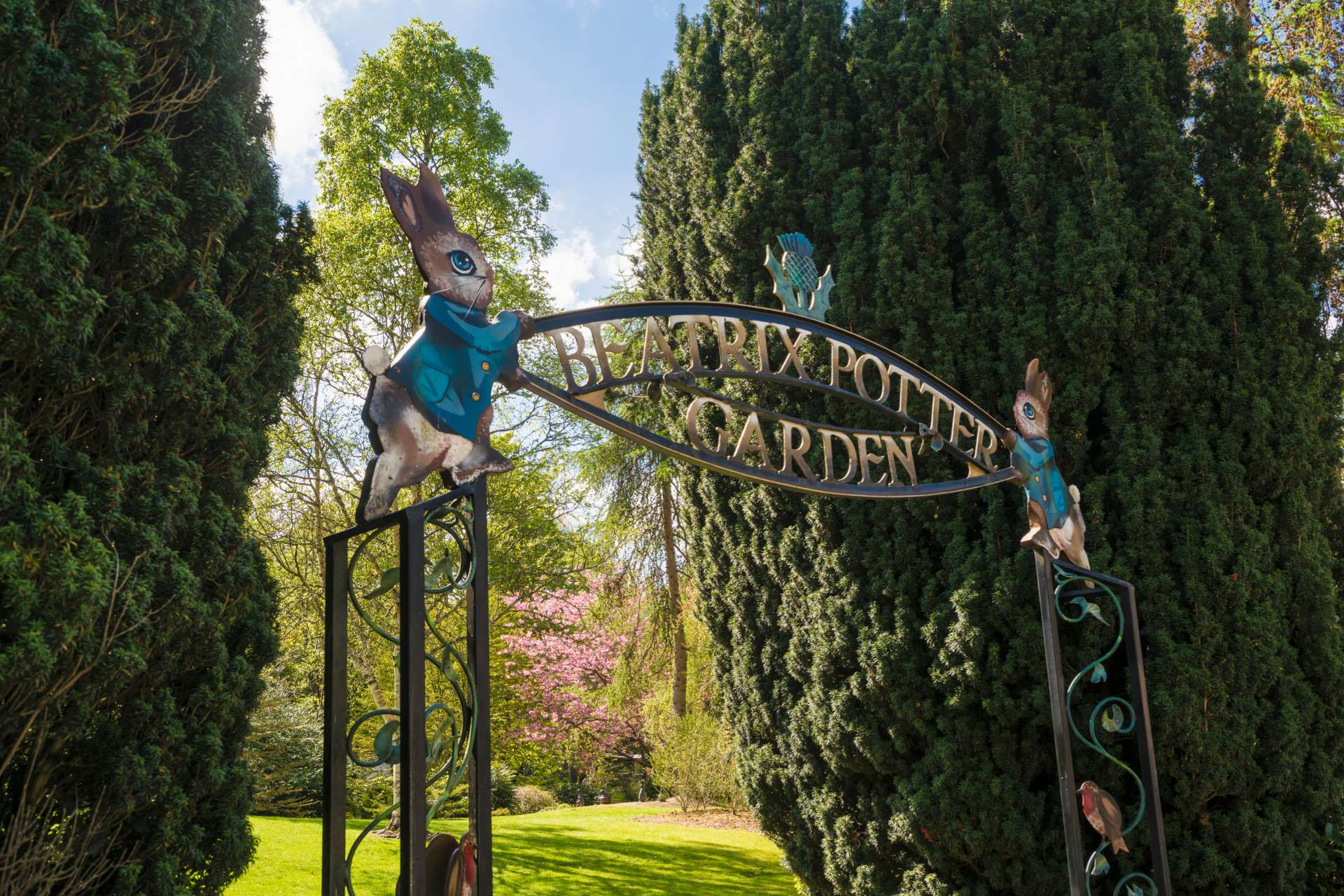 Alternatively, take in a performance at Pitlochry Festival Theatre, aptly named ‘Scotland’s theatre in the hills’ on the banks of the Tummel with its views of the river and the ‘Speckled Mountain’, Ben Vrackie. Its festival gallery displays work of many leading Scottish artists, from traditional to contemporary genres.

Code Embed: Cannot use CODE Scone as a global code as it is being used to store 2 unique pieces of code in 2 posts

Have you seen the recent historic themed films, such as Outlaw King or Mary Queen of Scots, on screen? Then why not visit some real-life Perthshire locations where these individuals once stood. Scone Palace was the crowning place of many Scottish kings, including Robert the Bruce, whose story was brought to life in Outlaw King. You can also enjoy tours with the palace’s head gardener to hear of the heritage of their tree collection, including the Murray Star Maze which was created by renowned designer, Adrian Fisher. It has 2,000 beech trees making it one of the UK’s most challenging mazes. 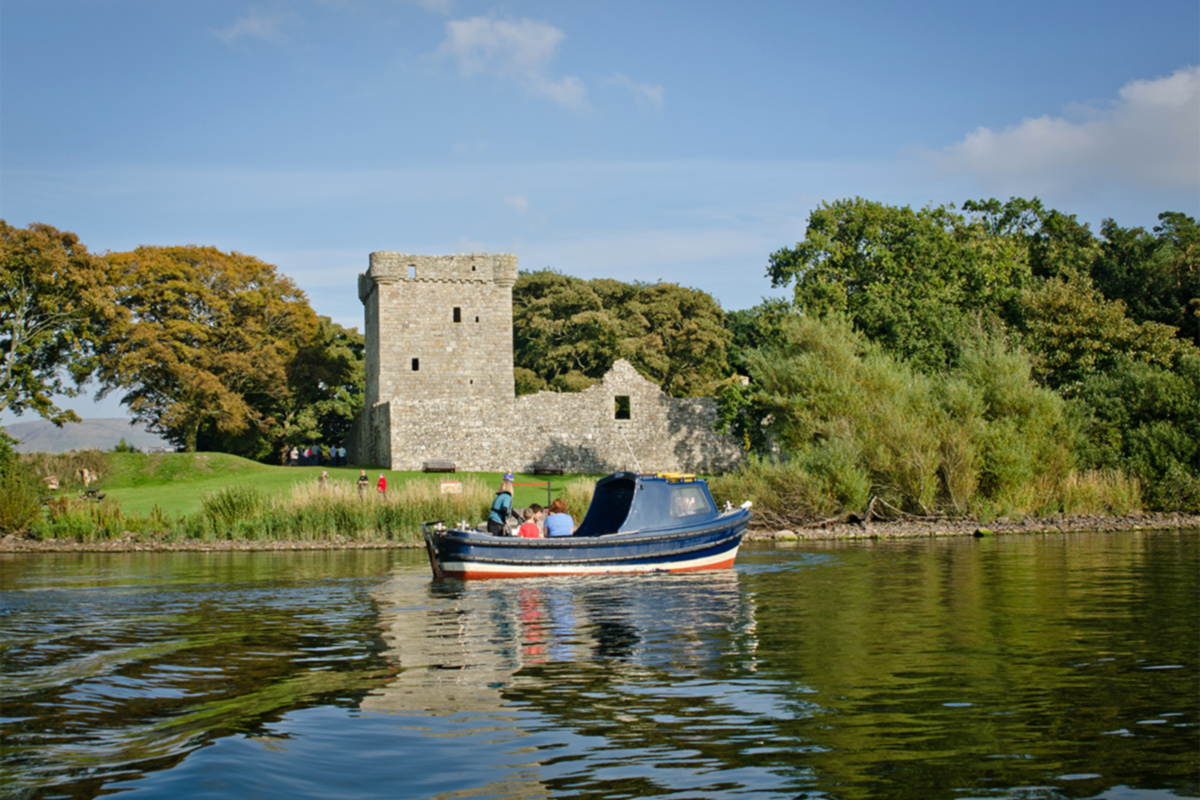 You too can follow in the footsteps of Mary Queen of Scots and take a boat trip out to Lochleven Castle, which was her prison between 1567 and 1568.

We've just added a new cake to our range and it's vegan! The team have all been taste-testing this lemon, chia and pistachio loaf with fruity apple, plum and rhubarb jam and it gets two thumbs up from everyone! (Please note that this cake is kept chilled in our kitchen so it takes slightly longer to serve than our other cakes) #treats #foodie #baking #pattisiere #yum #delicious #eatlocal #bakeyourown #kinross #visitscotland #heart200 #sweettooth #lochleven #lochlevenslarder #vegan #vegantreats #lemon #chia #pistachio #perthshire #scottishvegan

Then round off your visit with a stop off at Loch Leven’s Larder to stock up on local produce to nourish body and soul or take in an afternoon tea in one of the rotating garden pods overlooking the loch and Lomond Hills.  Or head to the tap room at Loch Leven Brewery and sample some of their  “Great Scots” range  of beers, gins or whisky named after historical Scottish figures with links to Loch Leven. So savour a local Loch Leven gin or  a Mary Queen of Scots whisky!

Perthshire also featured in the recent Outlander seasons. The idyllic area around Loch Rannoch and Kinloch Rannoch, was seen in the background as Claire and Frank enjoyed their second honeymoon, following the end of the war.If you too are looking for a romantic break, the 5-star Dunalastair Hotel Suites in Kinloch Rannoch won’t disappoint. The hotel’s design-led style extends to its fine dining restaurant Edina’s, which prides itself on using the freshest, locally sourced food. 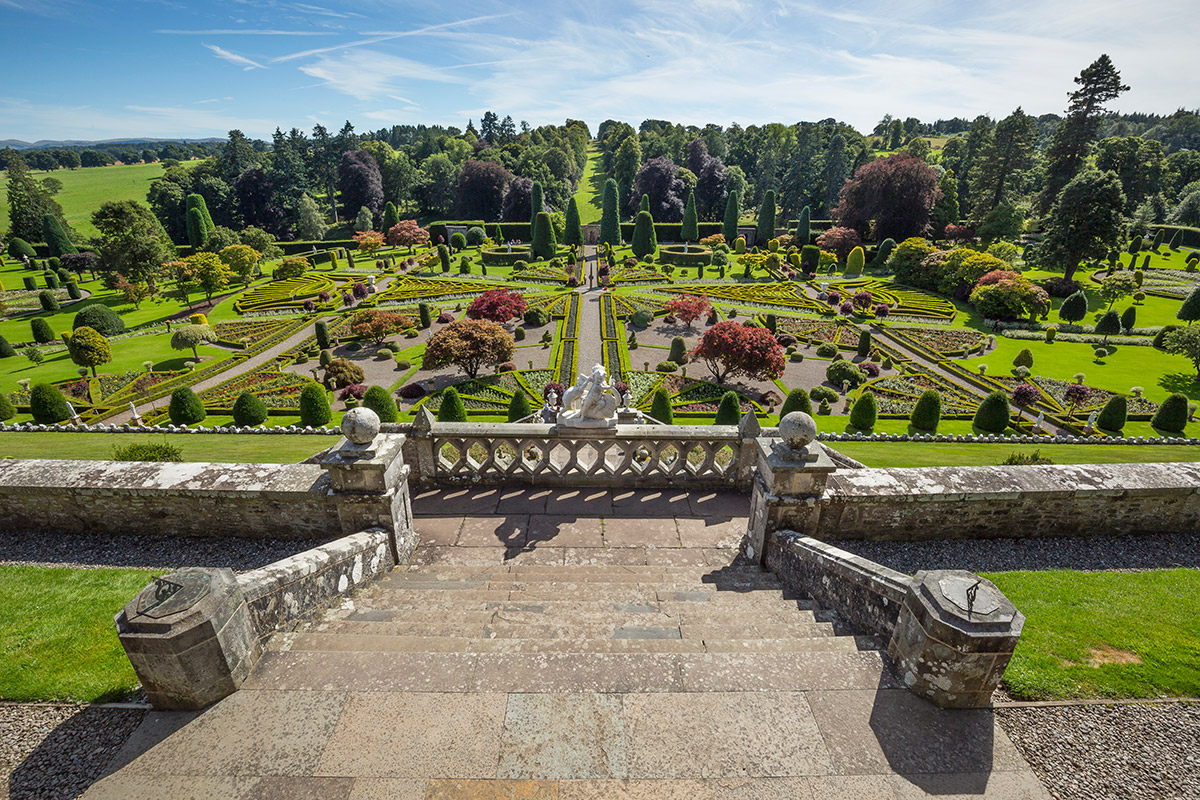 Drummond Castle Gardens near Crieff, appeared as the ornate park and orchard of the Palace of Versailles in France in the series. The gardens are one of Europe’s finest examples of a formal garden, designed in the Italian parterre style. Look out for the peacocks which lend an aristocratic air to the garden’s scenery!

Not just a bed, but somewhere special

Hobbit houses, tree houses, shepherd huts or glamping yurts… what will your choice be? If you’re inspired by Lord of the Rings, then a stay in the wonderful hobbit houses, at Craighead Howf, near Braco, is a must.

The beautiful tree houses at Dalnoid in Glenshee are complete with hot tubs with exquisite views. Just along the road, you’ll also find Persie Gin distillery, whose gins are designed to stimulate your sense of smell.

Christmas is a great time to explore scottish gin offerings with a wee something for yourself to enjoy. I visited @persiegin a couple of months ago and I was lucky to have a try of their Ladrador gin. For me it totally captured the dog’s personality in the flavour. It had a light effervescent feel when I first had a try, then a nice lemony flavour came through for me. In many way it reminded me of lemon sherbet in terms of mouthfeel. A pretty surprising gin, in a good way! I didn’t think a gin could have that sort of feel to it. For me it had parallels to a ladrador’s sweet and happy temperament. Persie are a great distillery. They don’t do things by halves, and that’s why I love Simon and Chrissie. Their citrus gin is really citrusy, their herby gin is really herby, their Old Tom is really old tom-y. Right from the off, they have created gins that would appeal to the three most popular flavours, so no-one would feel missed out. Which is your favourite @persiegin ? Mine is the zesty citrus. My hubby loves the herby gin. . . . #gintasting #scottishgin #ginoclock #ginlove #gindrinkers #ginroomie #persiegin

Walk with llamas at Ecocamp Glenshee or enjoy a weekend break in one of their llama themed shepherd’s huts. You can even rent a dog (with proceeds going to a dog charity) to take out for a walk. 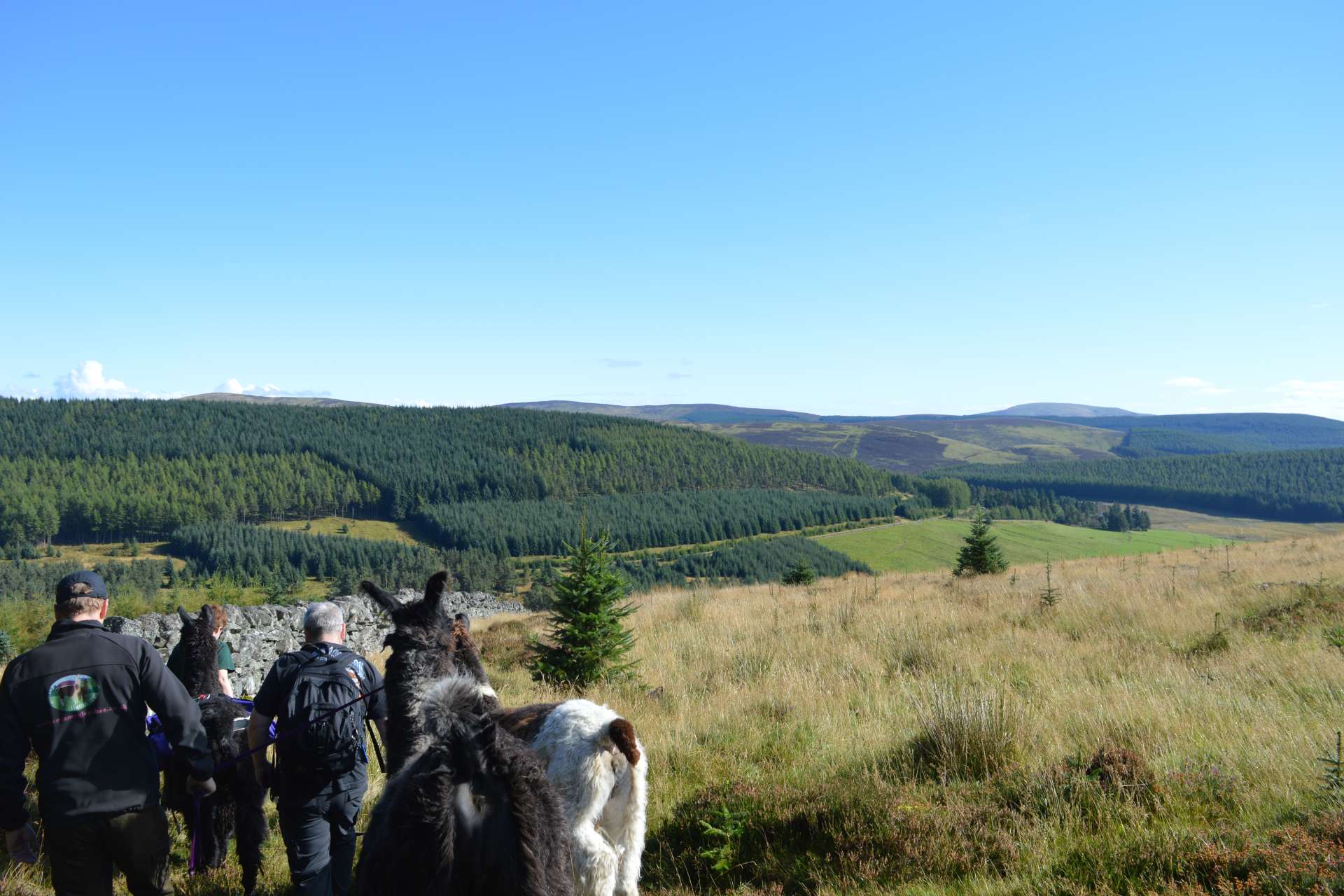 Walking with llamas at Ecocamp Glenshee

Described as “for the plant curious and ethical luxury”, Scotland’s first fully vegan hotel Saorsa 1875, has recently opened in Pitlochry. There’s a great choice of places to stay and things to do nearby that meet your style to achieve the perfect “me” time.

So, whatever time of year you plan to Live Life Well in Perthshire, you’ll find an amazing choice of things to do and places to stay that will leave you refreshed, content and feeling great!

9 of the Oldest Places to Stay in Scotland