VisitScotland caught up with Nicola Holland, a travel blogger and an active member on our new VisitScotland Community. She recently explored the east coast off Edinburgh and Fife and all of its quirky little islands; here’s what she discovered!

Scotland has over 780 islands and the most popular are usually over on the west coast such, as Mull and Arran, or up in the north, such as Shetland and Orkney.

The islands off the east coast of Scotland are less talked about but throughout the centuries have been an important part of life in Scotland. I’ve been exploring these islands, more specifically the islands of the Forth, off the coast of Fife, Edinburgh and the Lothians.

The Firth of Forth is an estuary flowing into the North Sea, separating the Kingdom of Fife and Edinburgh. This is where I took my first, of three, boat trips, with Edinburgh Boat Charters, to explore the Islands of Inchgarvie, Inchmickery and Inchcolm. 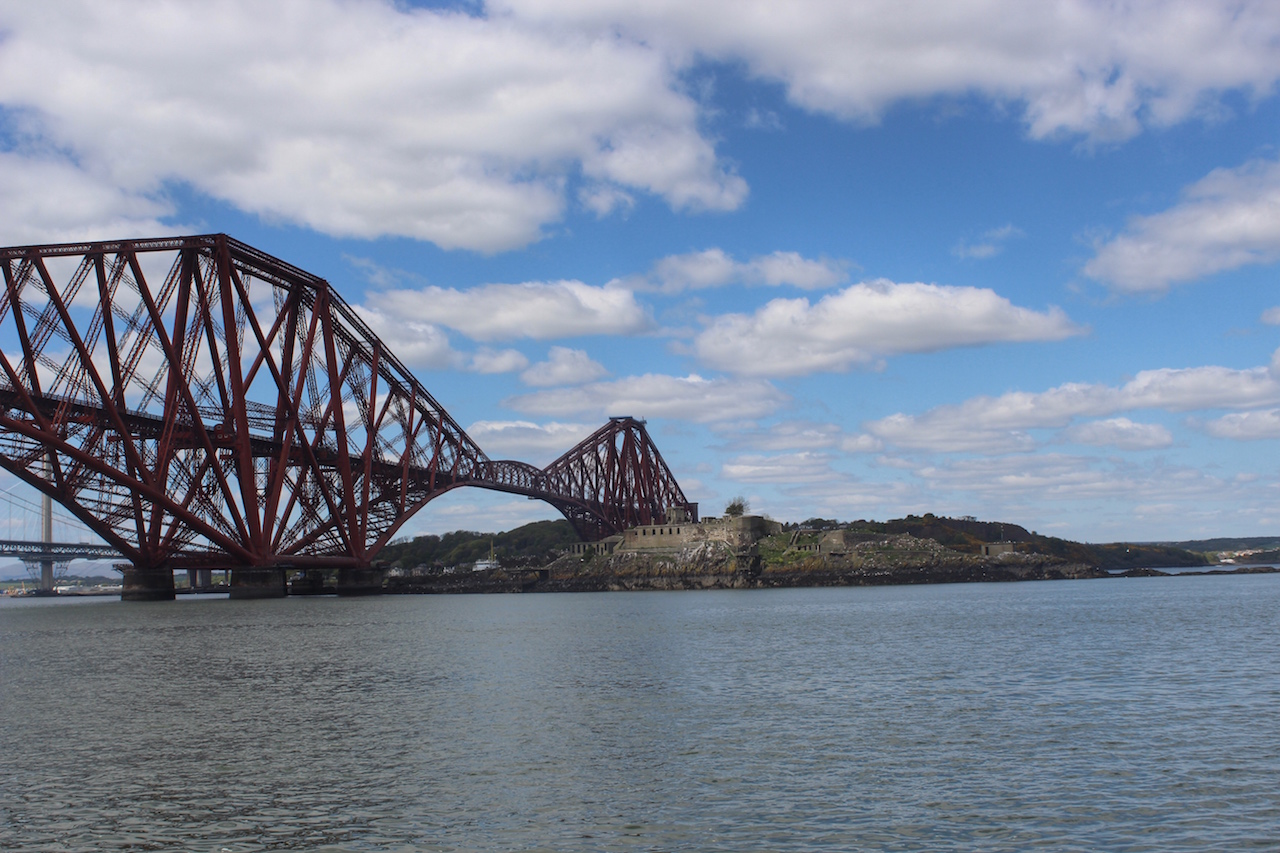 The Forth Rail Bridge and Inchgarvie © Nicola Holland

Leaving from the pretty marina of Port Edgar in South Queensferry, on a luxury Catamaran, we sailed gently under the Forth bridges to our first island, Inchgarvie. Sitting directly under the Forth Rail Bridge this island has always been seen as strategically important, with James IV and John Dundas building the first fort on the island to help protect against pirates. Royalists during Oliver Cromwell’s attack built further defenses, gun batteries were added during the Napoleonic period and it was used for gun placement during both wars. It has also previously been a prison and a quarantine base for recovering plague victims. A colourful past you might say, and particularly photogenic hugged around the base of the vibrant rail bridge.

We sailed next to the tiny island of Inchmickery, which, like Inchgarvie, looks like a battleship from a distance. Now a RSPB nature reserve, a lot of the fortifications from both world wars still exist. With the sun beaming down and the water sparkling, it was hard to believe the turmoil these islands have seen as they protected the coast from attacks from everyone from Vikings to Oliver Cromwell.

Often referred to as the “Iona of the east” the beautiful island of Inchcolm completed our triple whammy of islands for the day. Although we never landed on the island it’s a popular stop off for visitors who enjoy the Augustine Abbey, a very well preserved example of Scottish medieval architecture. Cared for by Historic Scotland, it is fully open to the public so you’re free to explore and you can climb to the top for some fantastic views. There are two delightful little beaches and lots of areas to sit and relax as well as a gift shop and visitor centre.

We had a fantastic day with Edinburgh Boat Charters. The captain, Colin, showed my daughter the ropes and allowed her to take the wheel of the catamaran to sail under the bridges. The constant supply of cookies, tea and music was a welcome treat. This was an alternative but very luxurious way to see the island of the Forth.

The Lamb, Craigleith, and the Bass Rock 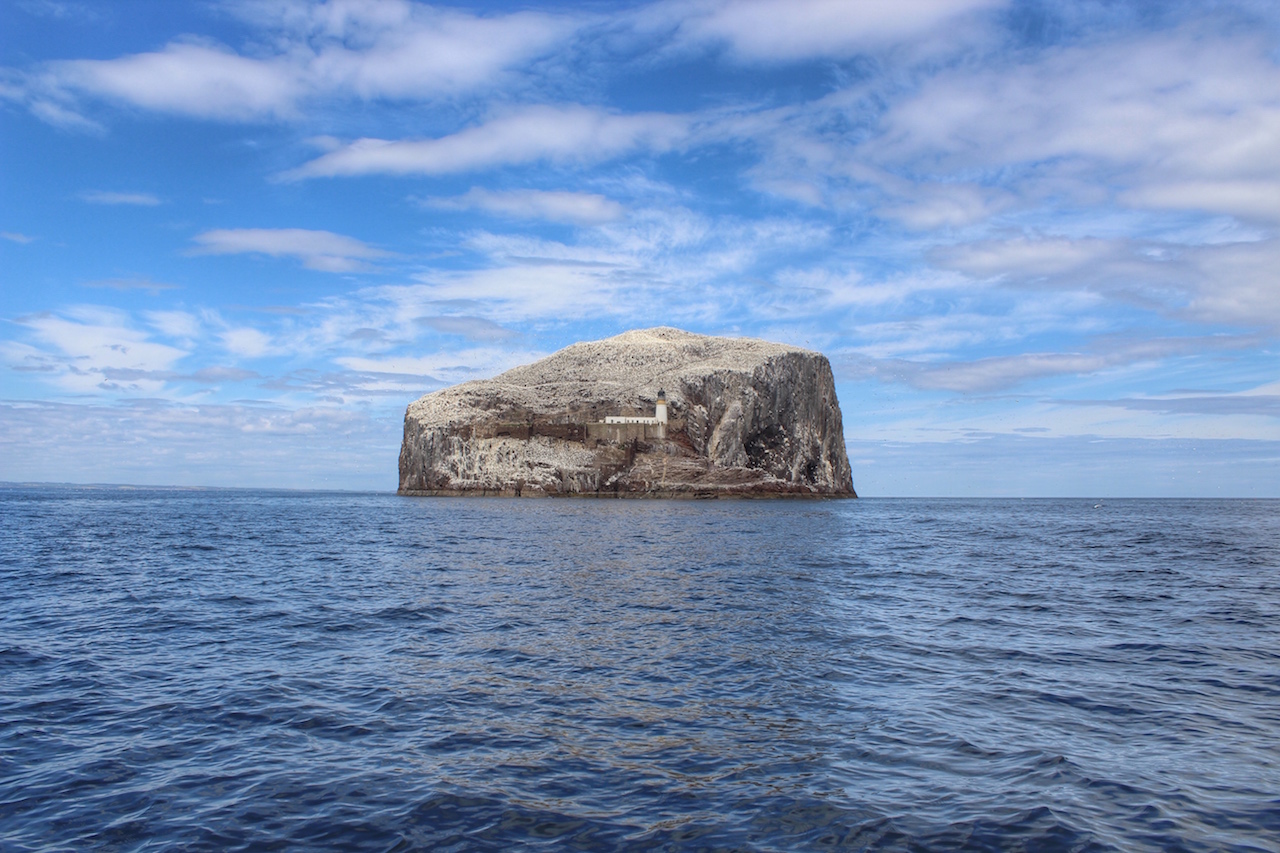 The following weekend my daughter and I headed to the Seabird Centre in North Berwick to have a go on the high-speed rib, this time to photograph the islands of the outer Forth – The Lamb, Craigleith and the Bass Rock.
Wrapped up in rather fetching waterproofs that you wouldn’t miss on a dark night, we straddled the saddle-like seats on the rib for an exhilarating ride to the first island – The Lamb.

Once best known for the thriving seabird population The Lamb is now perhaps better known as Uri’s island. The TV personality and spoon bender Uri Geller bought the island in 2009 for £30,000 believing it had hidden Egyptian treasure, namely gold and jewels left behind by Princess Scota, sister of Tutankhamen. He spent one day and one night on the island, describing it as treacherous but mystical and vowed to return to search for the treasure. It hasn’t happened yet.

Craigleith, a little further along the North Berwick coast, used to have a huge puffin colony (28,000 pairs!) until a thick layer of tree mallow invaded the island. It grew up as tall as three metres and suffocated the puffin burrows, leaving the island uninhabitable. Luckily a 5-year project by the Seabird centre named “SOS Puffin” brought volunteers to Craigleith who painstakingly cleared the ground so it now once again has a thriving seabird colony. The volcanic rock which forms these islands are similar to the formation of Castle Rock and Arthur’s seat in Edinburgh but these are in a slightly less busy chaotic location. 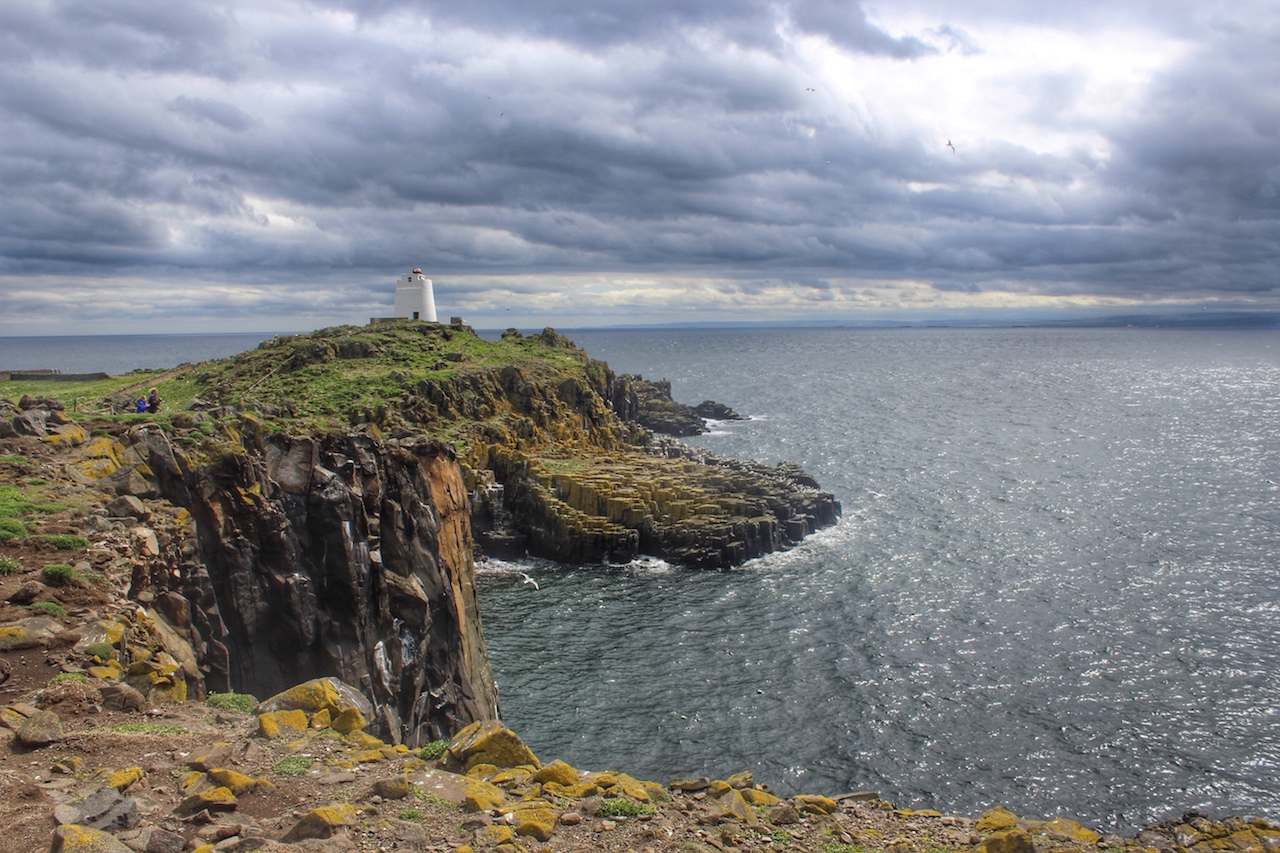 The lighthouse on The Isle of May © Nicola Holland

The famous Bass Rock greeted us with an extremely loud chorus of bird song and a huge amount of flying and diving gannets, razorbills and guillemots. As the boat hurtled towards the rock the passengers on board were mesmerised. Towering above us at over 350 feet the sheer cliff faces were covered with over 150,000 gannets. The noise was deafening. The Bass Rock is described by David Attenbourgh as one of the 12 wildlife wonders of the world. Chris Packham describes it as the most exciting bird spectacle in the UK. They weren’t wrong. As we sailed slowly around the circumference we came across caves which were dark and spectacular and then a lighthouse built by David Stevenson, of the famous Stevenson family. Further round, on the relatively flat west side of the island there is the remains of an ancient chapel and prison.

It’s in a special protection area, which covers some of the islands in the Firth and is also a Site of Special Scientific Interest because of the gannet colony. It is rather special.

On our speedy return to the pretty harbour we explored the excellent Scottish Seabird Centre itself, which has live webcams on several of the islands for those without their trusty sea legs. 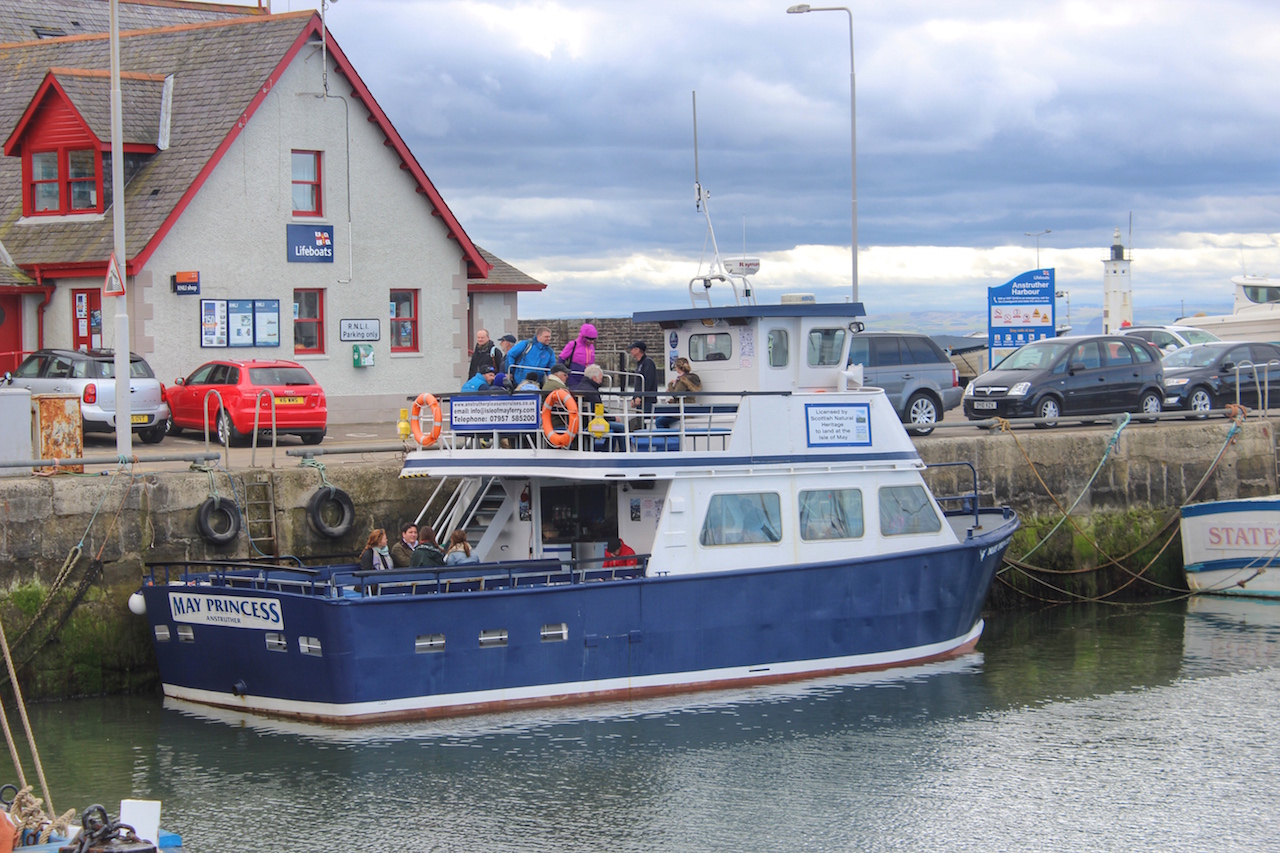 Our final boat trip left from Anstruther in the Kingdom of Fife, with Anstruther Pleasure Cruises. Our destination was to probably the most popular of them all, The Isle of May. A leisurely and exciting boat trip, especially in May and June when the puffin colony is at it’s peak. A stunning, peaceful and serene island with marked paths all over, you can explore to your hearts content. The paths lead to some truly beautiful view points over the steep cliffs of the south west side to the sea stacks and caves below. The gentle slope to the northeast lets boats anchor and seals bathe. With a new visitor centre charting the history of the island, and with information about the wildlife likely to be found, it’s a popular trip in the summer months. The island is an important bird research area and volunteers spend weeks on the islands studying migrant birds and puffins. We had a lovely two-hour walk around the island and loved watching the puffins.

This is just a selection of the fab boat trips available so you too can explore these fantastic islands.

If you’ve experienced any of Scotland’s islands, why not join in and chat about it on our VisitScotland Community?