Ok, it’s time to come clean – we *may* have been a little flexible with the truth, as is traditional on April 1. But our lie was perhaps more truthful than most, because the plans for a second rail bridge over the River Forth really do exist! Here’s Craig Bowman from Network Rail again, to explain all (you really can believe him this time, we promise!):

So, the plans we shared were discovered during recent research into the Forth Bridge for its upcoming visitor experience. Discovered on micro-fiche, the designs were created in 1945 for a second rail bridge over the River Forth. But little is known as to why they were made – perhaps as a back-up in war time, if anything were to happen to the Forth Bridge? There are, however no current plans to build it!

Network Rail (and us!) are really keen to find out more – if you have any information about the plans, please do get in touch by emailing: The Forth Bridge Experience

Were you taken in by our April fool? Let us know what you thought or share pics of the current bridges using #ScotSpirit on Twitter or Facebook, Instagram to give us permission to repost.

The original blogpost – see below for our wee stunt

The Forth Bridge is one of the most recognisable structures in the world today, and we’re pretty proud of that! It’s an iconic symbol of Scotland’s engineering pedigree and ingenuity. And in the Year of Innovation, Architecture and Design 2016 we are delighted to announce that VisitScotland, in conjunction with Network Rail, has unveiled an exciting new project to ensure that the bridge can continue to wow visitors and locals alike for hundreds of years to come – the building of a fourth Forth bridge! 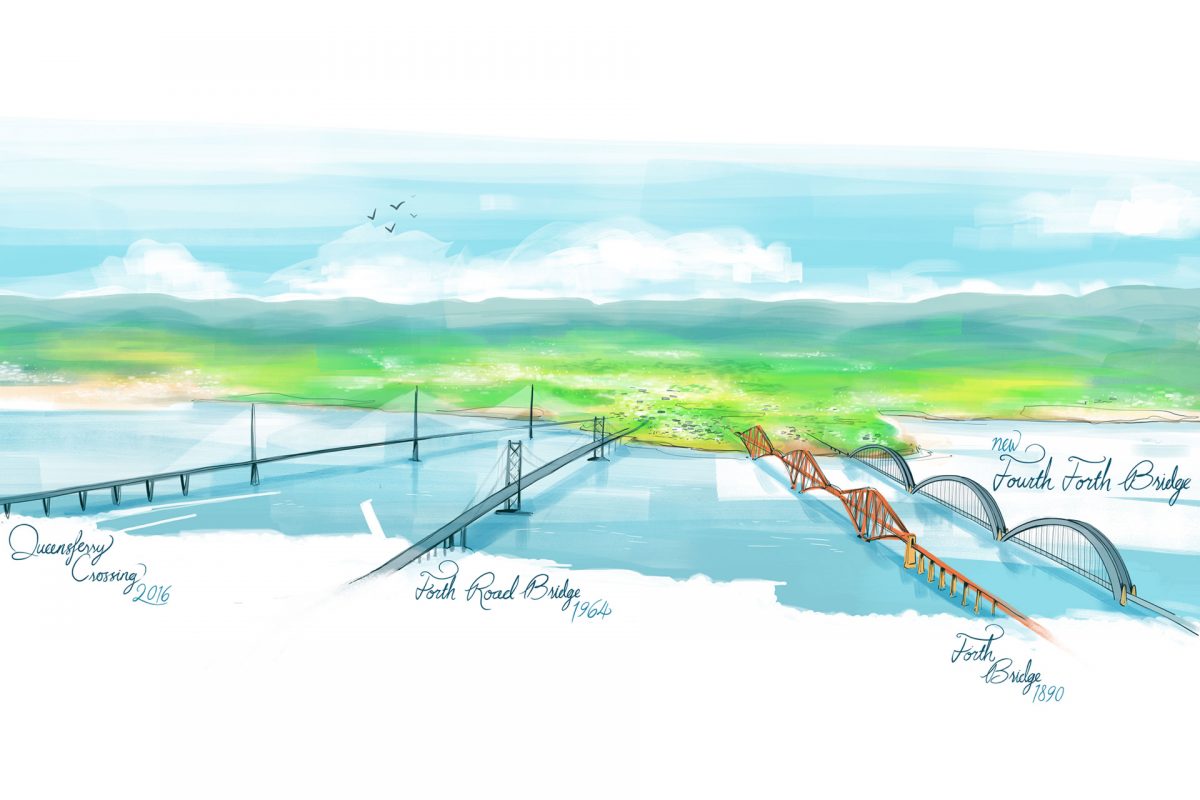 An artist’s impression of the Fourth Forth Bridge

A firth of four

Network Rail has reported a huge rise in demand for train travel in Scotland, with initiatives such as the successful launch of the new Borders Railway in 2015 and the Spirit of Scotland Travelpass earlier this year proving that Scots and visitors are keen to travel by train. The new £1,420,160,000 bridge will allow for a staggering 400 trains to cross over the Firth of Forth each day. The new bridge, to be named the Fourth Bridge, will be located to the east of the existing rail bridge, with trains crossing between Edinburgh and Fife and joining the main line at either side using a state-of-the-art switch-track crossing system.

Here’s Craig Bowman from Network Rail with more information on the new bridge:

The Fourth Bridge will bear the majority of the daily train crossings, leaving the original Forth Bridge free to become an even more fantastic attraction, with special steam train rides, bridge climbs and themed excursions available throughout the year. You’ll even be able to purchase a special round trip ride over both bridges, so that you can admire the Forth Bridge from the adjacent bridge, and get great snaps of it too!

Construction will commence in 2018 and the blueprint of the design shows a triple-arched bridge that will complement the existing Forth Bridge. Inspired by early 20th Century engineering, the bridge is an ambitious project said to be the equivalent of building three Sydney Harbour Bridges back to back. Building will be overseen by Scottish architect Ailsa Polyford, whose current work includes bridges in Berlin, Tokyo and Manchester.

We’ve always had our finger on the creative pulse – just take a look at this animation for a taste of Scotland’s contribution to the world of innovation, architecture and design!