From puffins to orcas, Scotland has no shortage of fascinating marine life. We are an island country after all! Take the time to get up close to some of nature’s most incredible beings in their beautiful coastal and marine habitats, and experience awe-inspiring moments of connection with nature.

Here’s our guide on where and when to see Scotland’s marine wildlife.

Just in time for Mother's Day we have added 2 RIBS this weekend. Be one of the first to head out to the Bass this season! Only 12 spaces on each RIB. Book online at Seabird.org #northberwick #seabirdcentre #seabirddays #boattrip #mothersday #gifts #giftideas #lastminutegifts #lastminutegiftideas

One of the best ways to see marine wildlife in Scotland in any season is to take a guided tour by experts on our marine animals and birds, vastly increasing your chances of a sighting.

Boat trips are an ideal way to see both marine animals and birds, where you’ll get a great view while causing minimal disruption to onshore breeding sites. You’re also likely to see more than one type of animal when you take a tour. Although, do be sure to take an accredited boat tour for the wellbeing and safety of the (often curious) sea animals.

See all of our listings for wildlife tours by boat, and be sure to select your chosen month for the most relevant options. There are many affordable day trips on offer, starting from just £10 per adult! 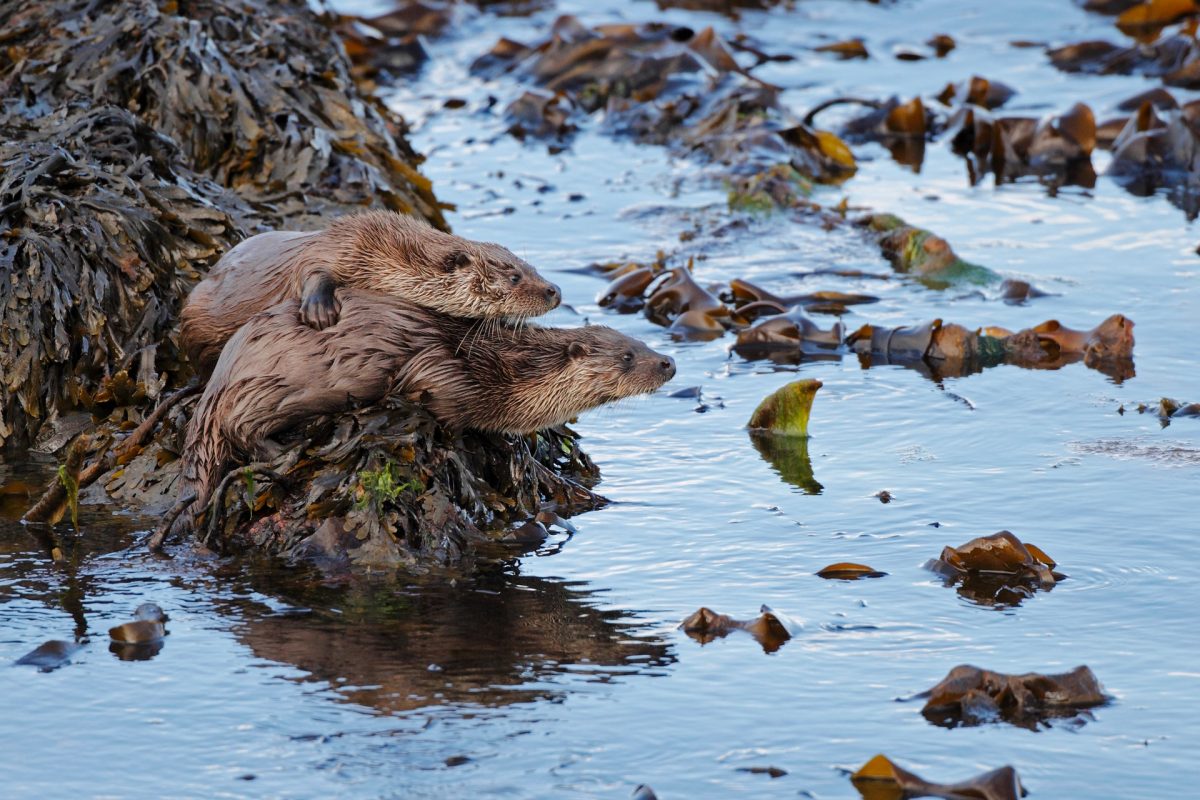 Otters live along the seashore and in rivers or lochs, more commonly in the north or west coast. It’s estimated that there are 8,000 living in Scotland. Otters are regularly seen in Shetland, which has the highest density of otters anywhere in Europe, and possibly the world! They are most active from evening till very early morning, breed all year round, and you might hear their playful ‘peep’ whistle before you see them.

Some of the best places to see otters include: 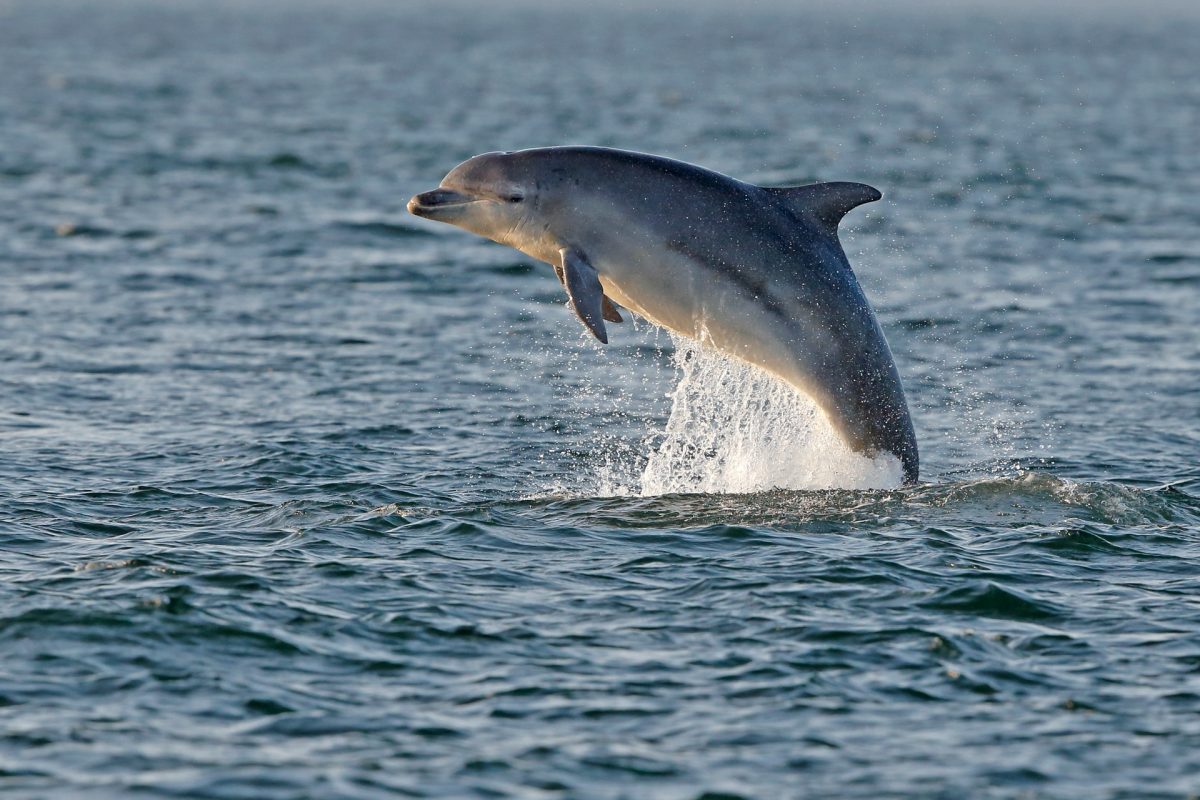 Dolphins are very intelligent and playful creatures – they are always fascinating and engaging to watch! They can be seen throughout the year, although they may be more visible in the spring and summer when the sea is calm. There are healthy populations of both bottlenose and common dolphins in Scotland, and they are quite easy to spot, particularly from small islands on the west coast.

Some of the best places to see dolphins include: 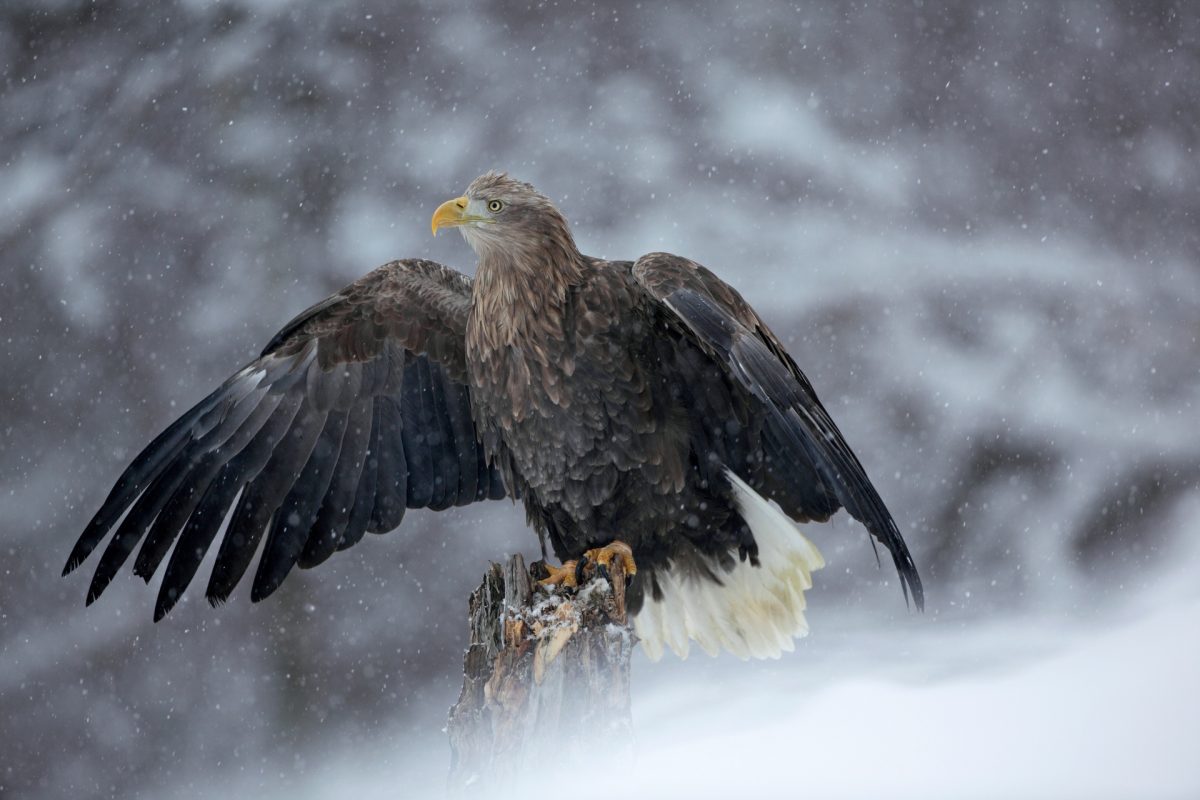 The largest bird in the UK, the impressive white tailed sea eagle has a wingspan of 2.5 metres on average, and stands at almost a meter tall! They are scavengers, but also hunt for fish, rabbits and seabirds. They became extinct in the UK in 1918, but thanks to successful reintroduction programmes, they are now thriving in several hotspots! There is potential to spot them on any wildlife boat tour, in the north or west of Scotland in particular.

Some of the best places to see sea eagles include: 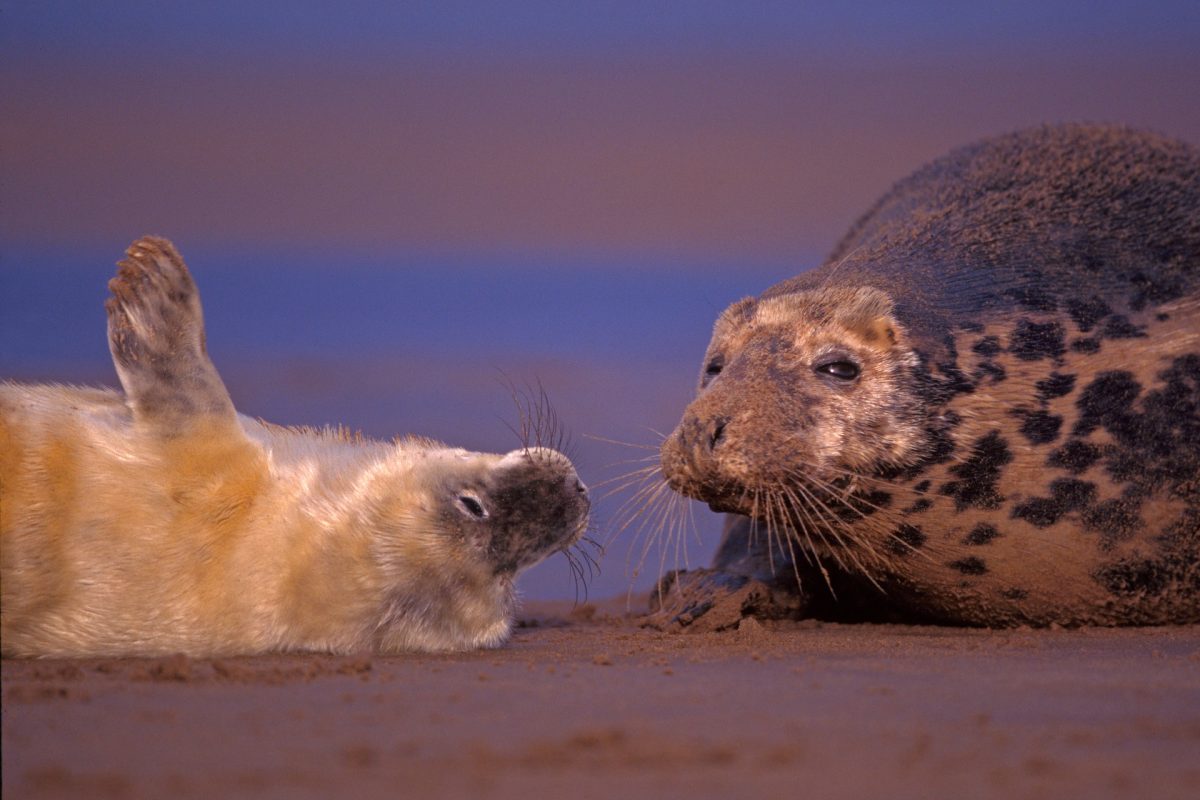 A grey seal and pup

Seals can be seen year-round resting ashore on rocks between their deep-sea fishing trips. The time to see adorable grey seal pups is when they are born onshore, between late September and late November. They stay ashore until they have been weaned and finished moulting in late December. However, the smaller common (or harbour) seals are born onshore in June, thus mothers with pups can be spotted on beaches in summer.

Some of the best places to see seals include: 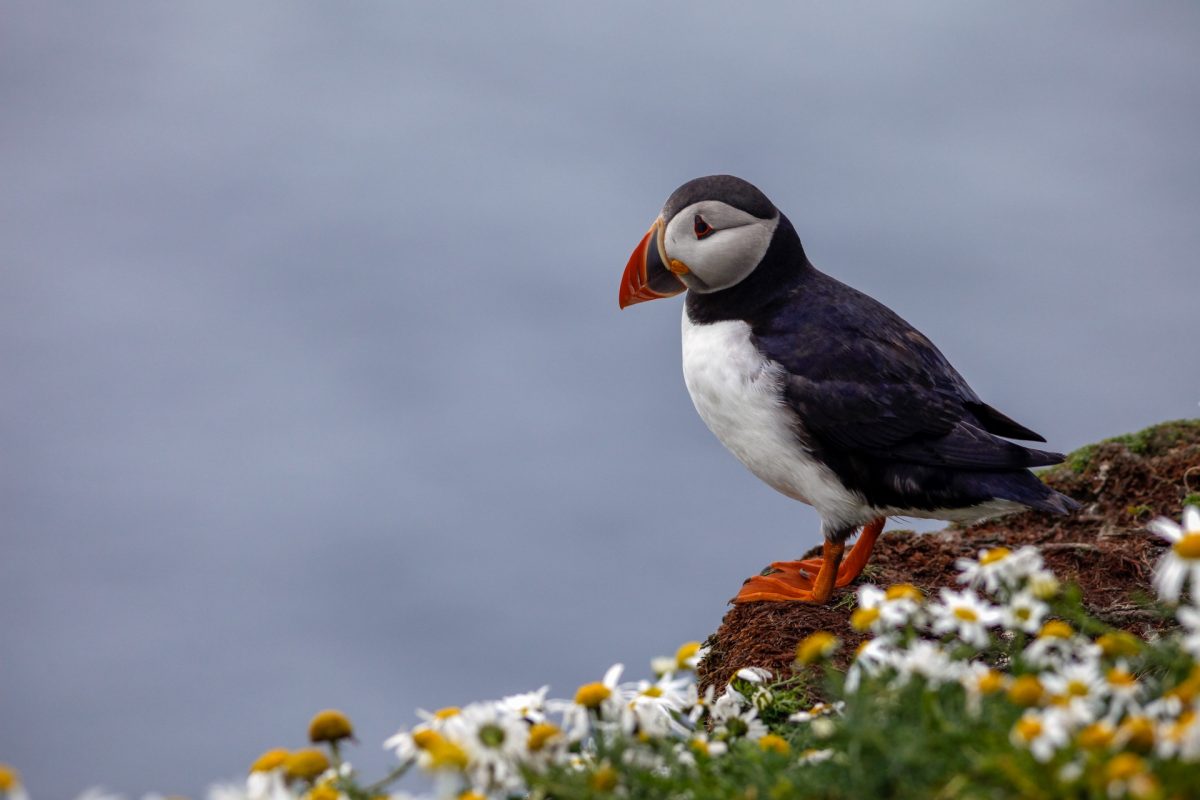 In spring, these absolutely adorable yet hardy little birds return to Scotland to breed at their favourite nesting spots. They can be spotted rearing their chicks in cliff-top burrows from late March to late August on numerous cliff tops around Scotland. The largest colony is found on the remote bird-haven isle of St Kilda.

Some of the best places to see puffins include:

North Atlantic killer whales sighted from the shore in Reawick, Shetland (part of Scotland) during a sunset! What a treat! Video: Josie Nisbet

Orcas, also known as killer whales, are actually the largest member of the dolphin family. These incredibly intelligent animals live and hunt together in family pods. They can be more elusive to spot than some of our other marine wildlife, but are mostly sighted between May and August in the far north around the Shetland and Orkney islands, when they come inshore to hunt the common seals that are rearing their pups on beaches. They are also occasionally spotted around the Hebridean islands.

Some of the best places to see orcas include: 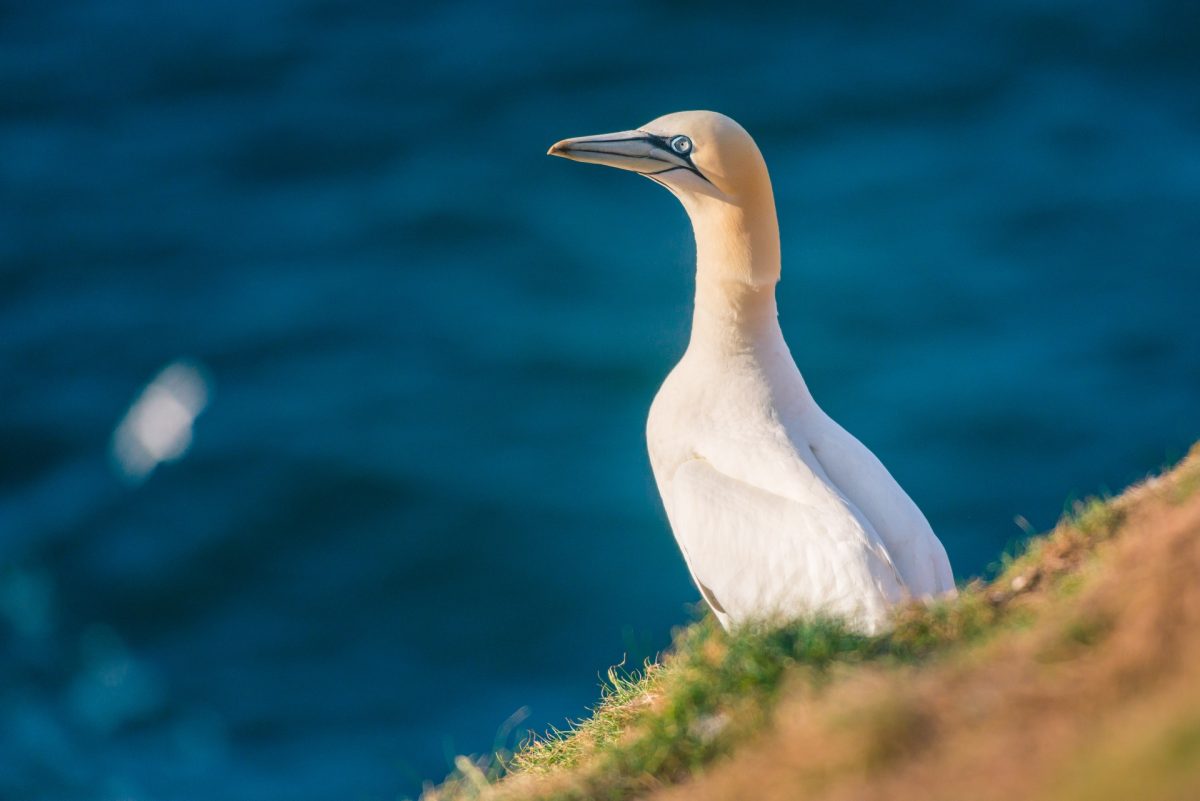 These sleek and eye-catching sea birds migrate to Scotland in early spring to spend the summer raising their young here. Scotland is one of the best places to see them as the biggest colony in Europe can be found on the Bass Rock, just offshore from North Berwick. The island is known for appearing white due to the sheer number of birds and their droppings! You can watch them diving headlong into the water at speed in a truly impressive spectacle!

Some of the best places to see gannets include:

Minke whales are very distinctive looking, and grow to 8 – 8.5 meters long on average. They can be found all around Scotland between May and October, but a few of them will remain here year-round. They often feed in shallower water and come close to land. Juvenile minke whales can be very inquisitive and may approach boats, so please make sure to view them with accredited operators.

Some of the best places to see minke whales include:

Growing to around 6-8 meters, basking sharks are the second largest fish in the world! These gentle summer visitors feed entirely on plankton – their feeding method is to glide slowly along the surface with their enormous mouths open. If you’re feeling brave, the most memorable way to see these sharks in Scotland is to get in the water and swim with them! Try a scuba diving tour with Basking Shark Scotland around Oban, from just £45 per adult.

From our home to yours – See Scotland Virtually

11 quirky experiences in the Outer Hebrides