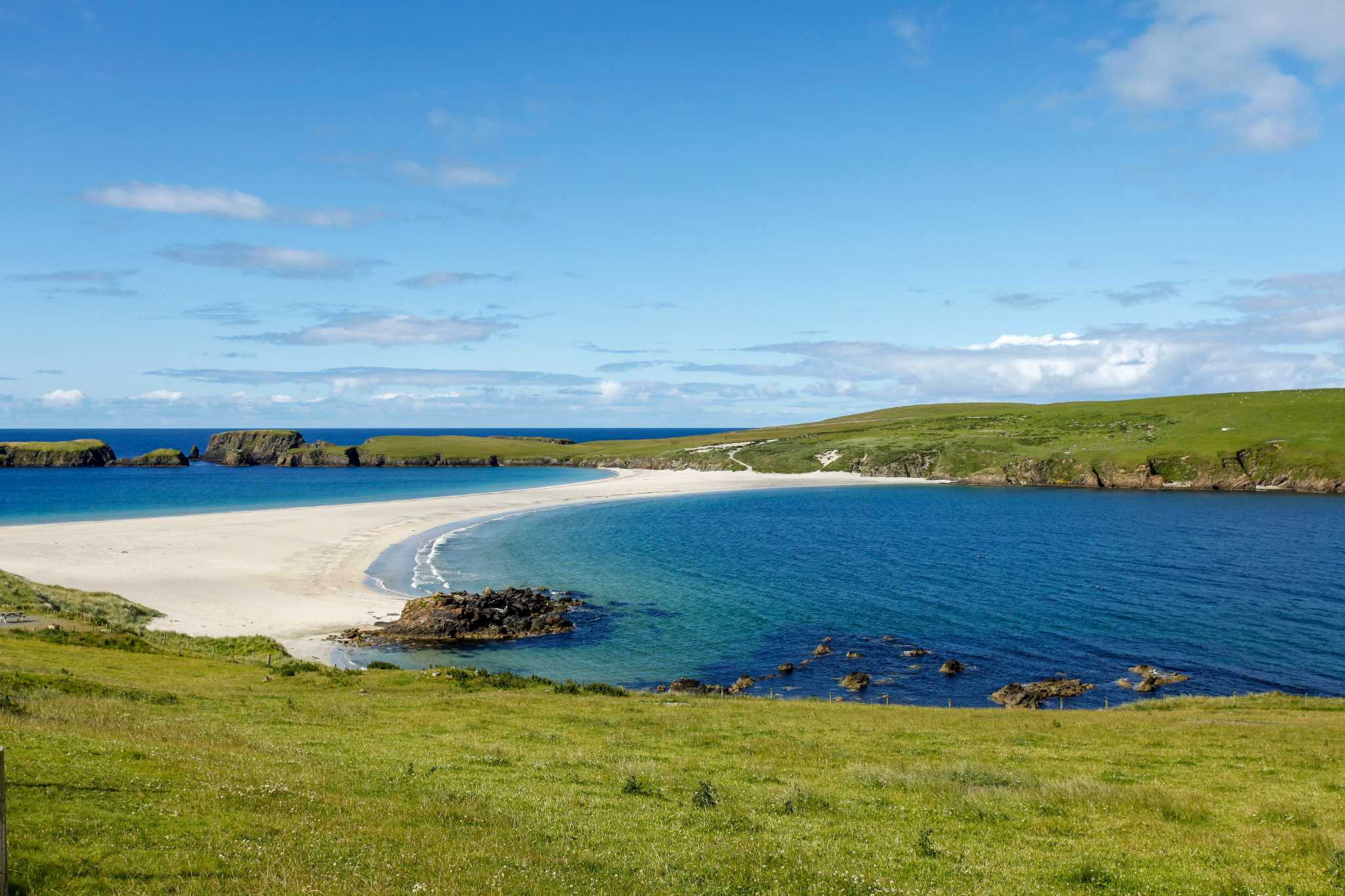 Enjoy 12 places to find amazing sea views in Scotland as we celebrate our (extended) Year of Coasts and Waters. Relax, slow down and imagine that feeling of being by the sea – after all, you’re never too far away from the coast in Scotland!

If you’re longing for a sea view, we have just the list. Immerse yourself in the sound of birds, the wind and the waves. Picture yourself with a backdrop of dunes, the sun setting over the harbour, or dogs playing with the family on the beach.

Viewed from North Berwick beach, the Bass Rock is a spectacular sight. Rising out of the Firth of Forth, this uninhabited island is an unforgettable part of the skyline. The island was once a retreat for early Christian hermits, later there was a castle built, and it was even used as a prison. Today the only residents are a large colony of gannets!

If you’re exploring East Lothian, take time to visit Tantallon Castle. The sea views here are remarkable. When it’s safe to visit, you can climb the towers of this ruined castle and see right along the coast. Below ground you’ll find a scary pit prison, a reminder of Scotland’s warring past.

3. The Mull of Galloway

The Mull of Galloway is Scotland’s most southerly point, where weather-beaten cliffs meet the sea and the natural views are stunning. Take a trip to the Mull of Galloway Lighthouse where you’ll be able to see Scotland, Cumbria, the Isle of Man and Ireland all from one spot. There is even an exhibition where you can learn about the solitary life of a lighthouse keeper.

Here’s another one for castle-hunters that will really impress you. Dunnottar Castle, on the Aberdeenshire coastline, is a cliff-top fortress that must be seen to be believed. Important figures from Scottish history have visited Dunottar, including William Wallace and Mary Queen of Scots. Soak up the views and get swept up in the past.

A post shared by A S H L E A (@shetland_captured)

The harbour town of Lerwick is the capital of Shetland, and a perfect starting point for exploring this northerly part of Scotland. Inspirational sea views are part of the everyday backdrop while the pretty buildings along the shore are super photogenic. Elsewhere in Shetland there are ancient stone monuments to visit, as well as seabirds and other wildlife to spot.

Not quite a sea view, but a loch view here at Kilchurn Castle.  When you visit this 15th century building you’ll see why it is one of the most photographed sites in Scotland. Perched right at the head of Loch Awe, with the peak of Ben Cruachan visible, Kilchurn Castle was inhabited for centuries and contains the oldest surviving barracks on the British mainland.

A post shared by The Arbroath Cliff Trail (@arbroathclifftrail)

The red sandstone cliffs along the Arbroath coastline are awash with sea caves, stacks, blowholes and arches. The view out to the North Sea’s wide expanse is all part of the experience. Walking here will take you through coastal grassland, sand dunes and woodland. Remember it’s important to stay on the designated footpaths as cliff walking can be dangerous.

A trip to Oban is one of the highlights of Scotland’s west coast. Easy to get around on foot and with a wealth of things to do, Oban is a great base for touring the surrounding countryside. The Oban seafront is no stranger to beautiful sunsets and the sea views from McCaig’s Tower above the town are stunning!

Scotland’s wild north west is punctuated with deep sea lochs. Part of the North West Highlands Geopark, Loch Eriboll is one such loch. Once used as a naval anchorage, the loch is a stunning and remote place to capture a sea view.  There is also a chance to see a 2000-year-old Iron Age wheelhouse on the hillside above it.

Sango Bay is a geologist’s paradise, with rock formations galore, as well as cliffs, dunes and caves, while the beach offers beautiful views out to the North Minch. A short distance to the east of the beach, you’ll find Smoo Cave – the largest cave in Scotland. This fascinating attraction reveals evidence of human habitation stretching back thousands of years.

The historic Port of Leith is where Edinburgh meets the sea. This buzzing district is home to trendy bars, restaurants and classic Scottish attractions such as the Royal Yacht Britannia. As the mouth of the Water of Leith flows out into the Firth of Forth, there are plenty of places to walk along the seafront and take photographs.

The tiny Aberdeenshire village of Pennan is truly connected to the sea. Situated at the bottom of steep cliffs and facing the crashing waves, this place is gorgeous on a sunny day but equally exciting on a stormy one. The most famous place in Pennan is probably the red phone box, now a listed building, which featured prominently in the hit film Local Hero.

How will you celebrate Scotland’s Year of Coasts and Waters? Footprints in the sand, pebbles, seashells, sunshine – whatever you love about the seaside, check out our tips to keep Scotland’s beaches beautiful.

Scottish Tree Festival: See the wood and the trees this autumn!