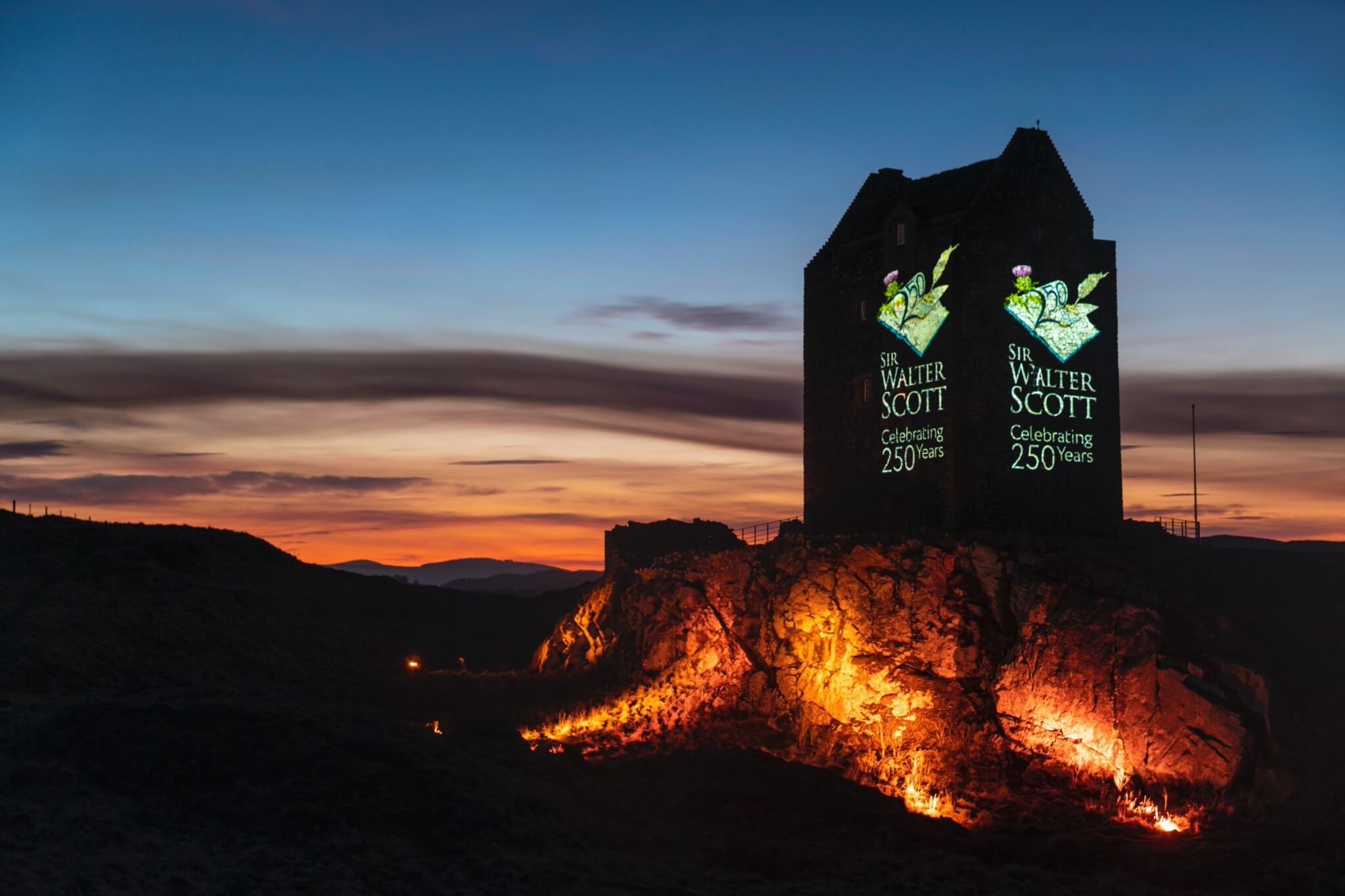 In every part of Scotland you can find attractions connected with Sir Walter Scott. From big country houses to city monuments, this famous Scottish writer left a fantastic legacy. In his 250th birthday year, we look at some of the famous (and not so famous) places associated with Scott and the stories behind them.

Find out more about Scott 250 and a series of special events.

Who was Sir Walter Scott?

Sir Walter Scott was born in Edinburgh in 1771. He went to school and university in the city and became a lawyer before embarking on a celebrated writing career. A man of humour, warmth and intelligence – but not without his tragic qualities – much of Scott’s fiction was inspired by the life and history of Scotland. It will come as no surprise that there are many amazing Scottish locations connected with this great writer.

Scott was an incredibly productive person, despite suffering personal tragedy in his life. As a boy he contracted crippling polio, was unlucky in love in his twenties, and in his fifties there came financial ruin. But despite these things, those who knew him admired his warmth and compassion.

His first original work – The Lay of The Last Minstrel – brought fame and fortune in the early 19th century as a poet. But it was his move towards fiction, especially historical fiction, that cemented him as one of the great writers of his era. In 1814 he anonymously published Waverley, a historical romance that explored the religious and political conflicts of the 1745 Jacobite Rising. The book became an international success. Many people guessed that Scott had written Waverley but it was not until 1827 that he revealed he was the writer!

Below are just some of the locations associated with Scott’s life and work. It’s probably fair to say that in most parts of Scotland you can find traces of his influence!

Located on the banks of the River Tweed in the Scottish Borders, Sir Walter Scott’s Abbotsford is one of the most famous country houses in the world. Set on a 1400-acre estate, Abbotsford is full of art, curiosities and books which reflect the mind, enthusiasms and preoccupations of the man who built it. As Allan Massie says in The Ragged Lion, ‘no one, I believe, can come to understand Scott who does not also know Abbotsford.’ 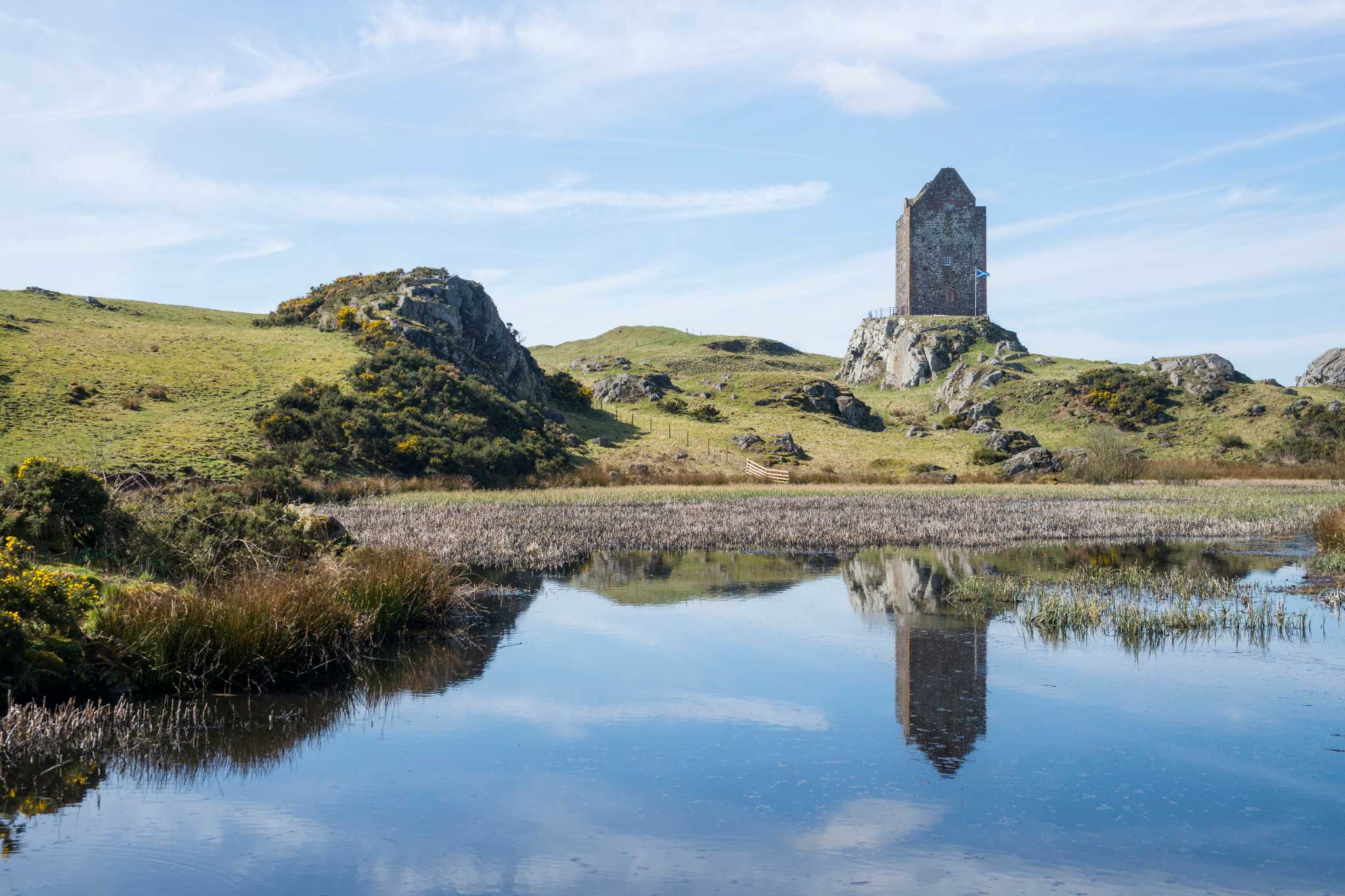 As a sickly child, Scott was sent to Smailholm Tower in the Scottish Borders for the good of his health. Smailholm is a 15th century laird’s residence set on a dramatic crag that you can still visit today. It was here in the Borders that his grandmother and aunt told him tales of the countryside, including the ‘Border Ballads’ that inspired some of his later work. The tower and the stories of his ancestral homelands had a powerful effect on his imagination. 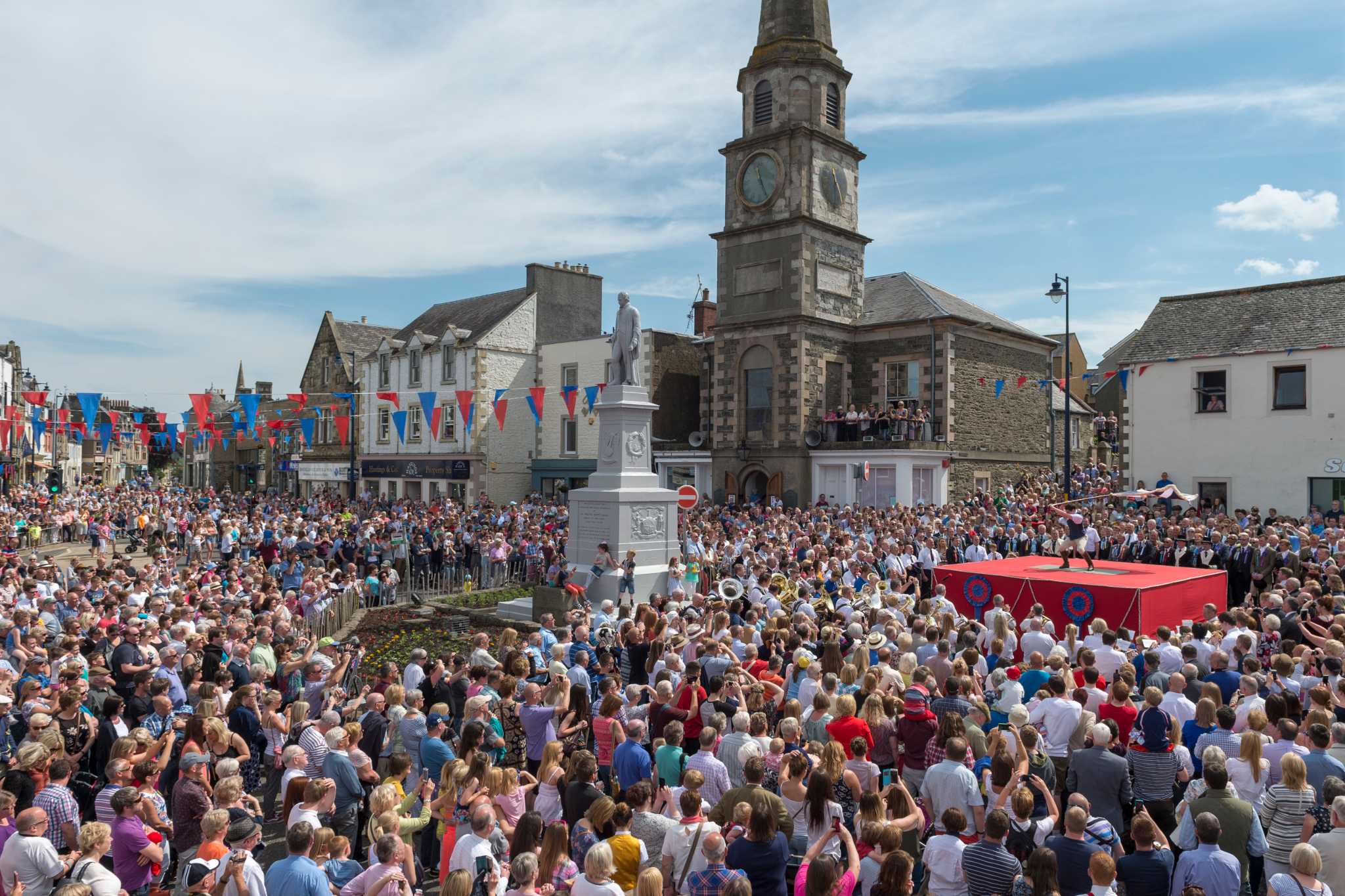 Now a museum, Sir Walter Scott’s Courtroom in Selkirk gives us a fascinating direct link to the great man. In this building, Scott sat as Sheriff of Selkirkshire, dispensing justice for nearly 30 years until his death in 1832. The building dates from 1804, with a 100 foot-high spire next to an imposing statue dedicated to Scott himself. 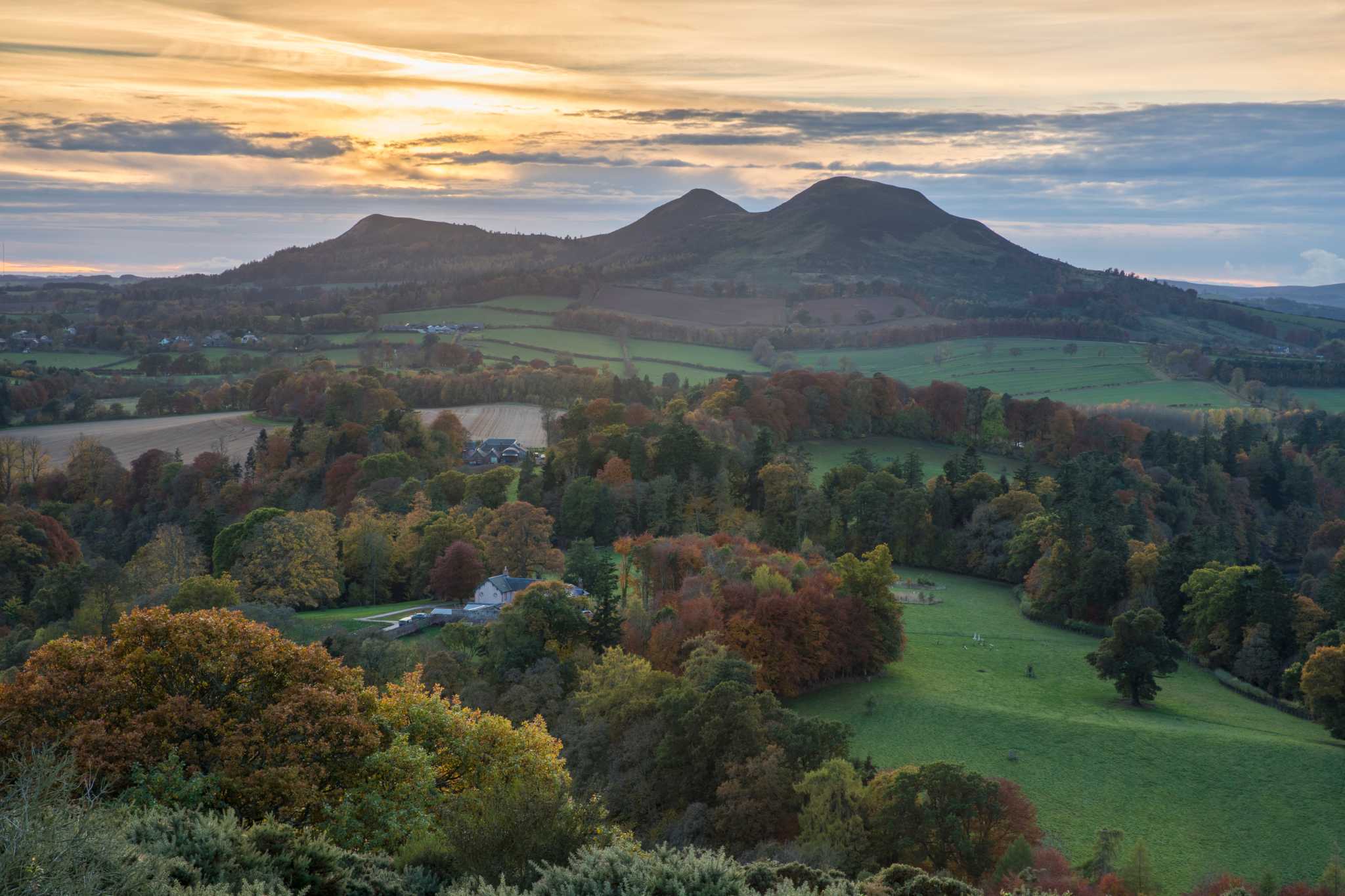 This stunning viewpoint across the Eildon Hills was known to be one of Sir Walter Scott’s favourite places to come and reflect. How many plot twists were ironed out here as he sat and gazed out over beautiful Borders countryside? Scott’s View can be accessed by car on the road from St Boswells to Kelso, turning off towards Dryburgh Abbey. 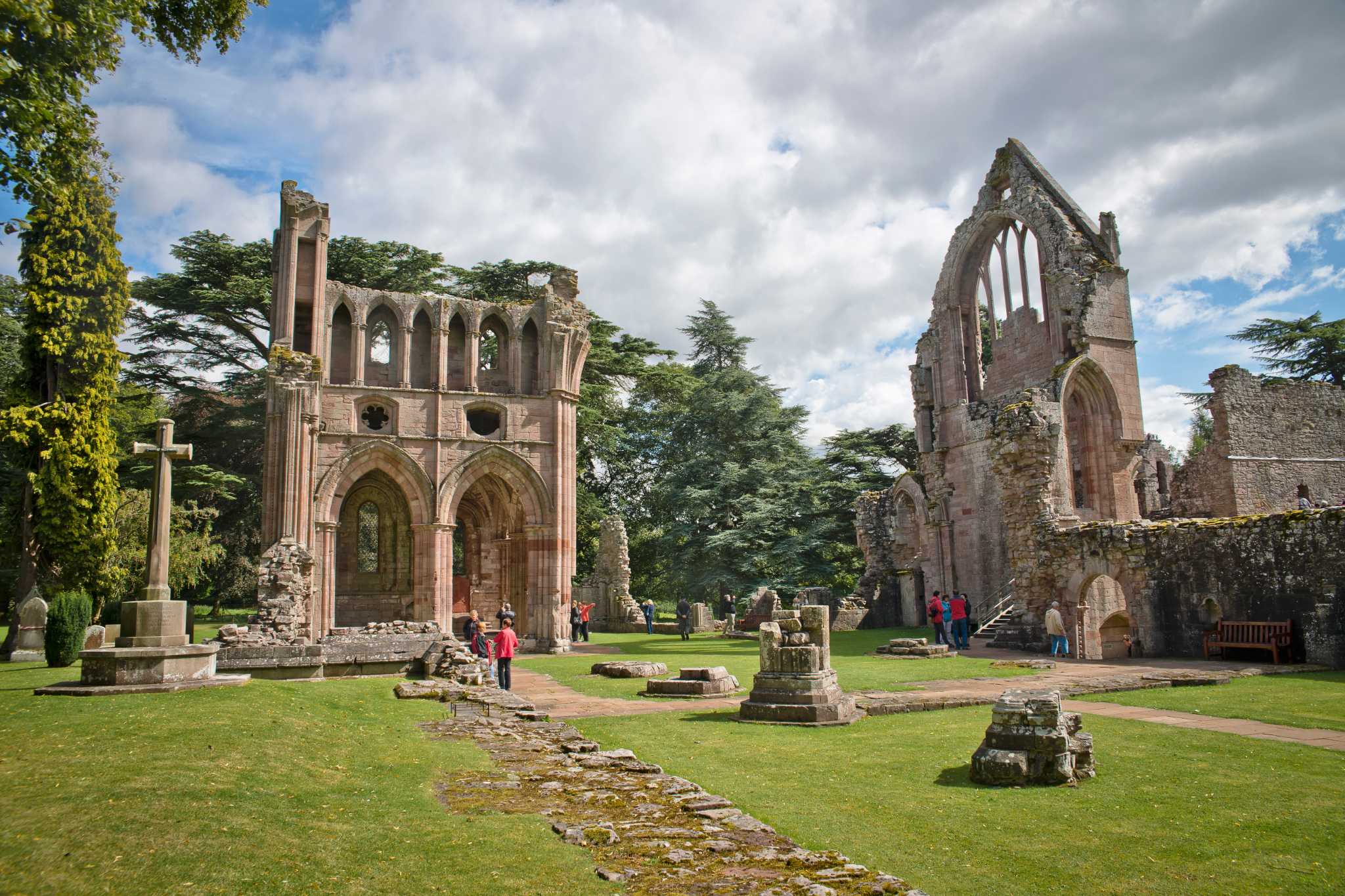 This strikingly romantic setting is the final resting place of Sir Walter Scott. It is fitting that the writer of heroic romances should have chosen such a place. The tomb itself can be seen in the north transept of the abbey. First established in 1150, Dryburgh Abbey is now in ruins but the peaceful atmosphere and gothic architecture that remains are very special. 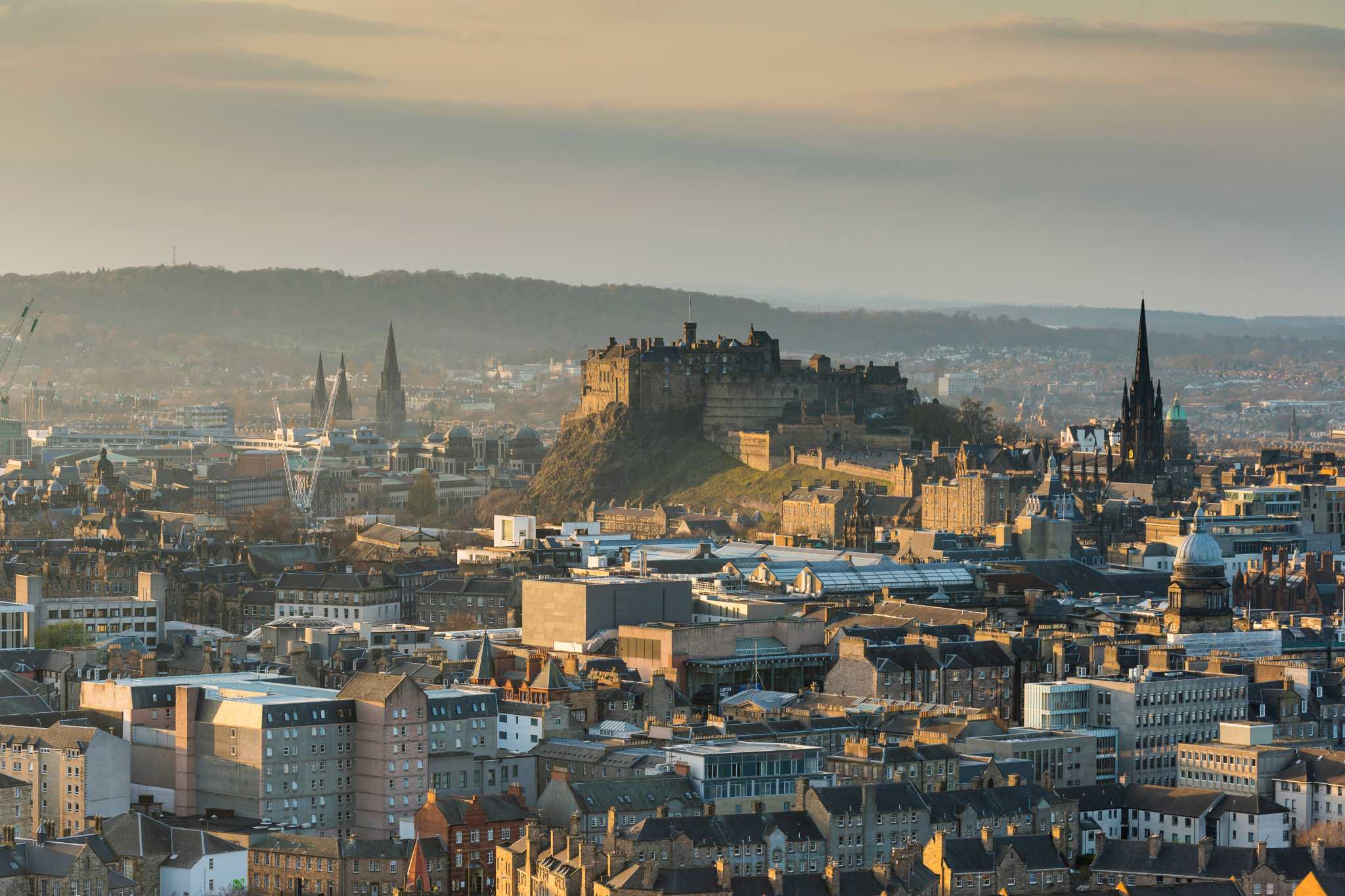 The Honours of Scotland, informally known as the Scottish Crown Jewels, are stored in Edinburgh Castle and one of the highlights of a visit to this iconic building. But back in 1818 the Honours hadn’t been seen for over 100 years. Sir Walter Scott, a keen student of Scottish history, was sure they were hidden in the castle somewhere. Scott lobbied the Prince Regent to mount a search for them and they were eventually found in a sealed-up chamber in the castle! Scott was delighted. 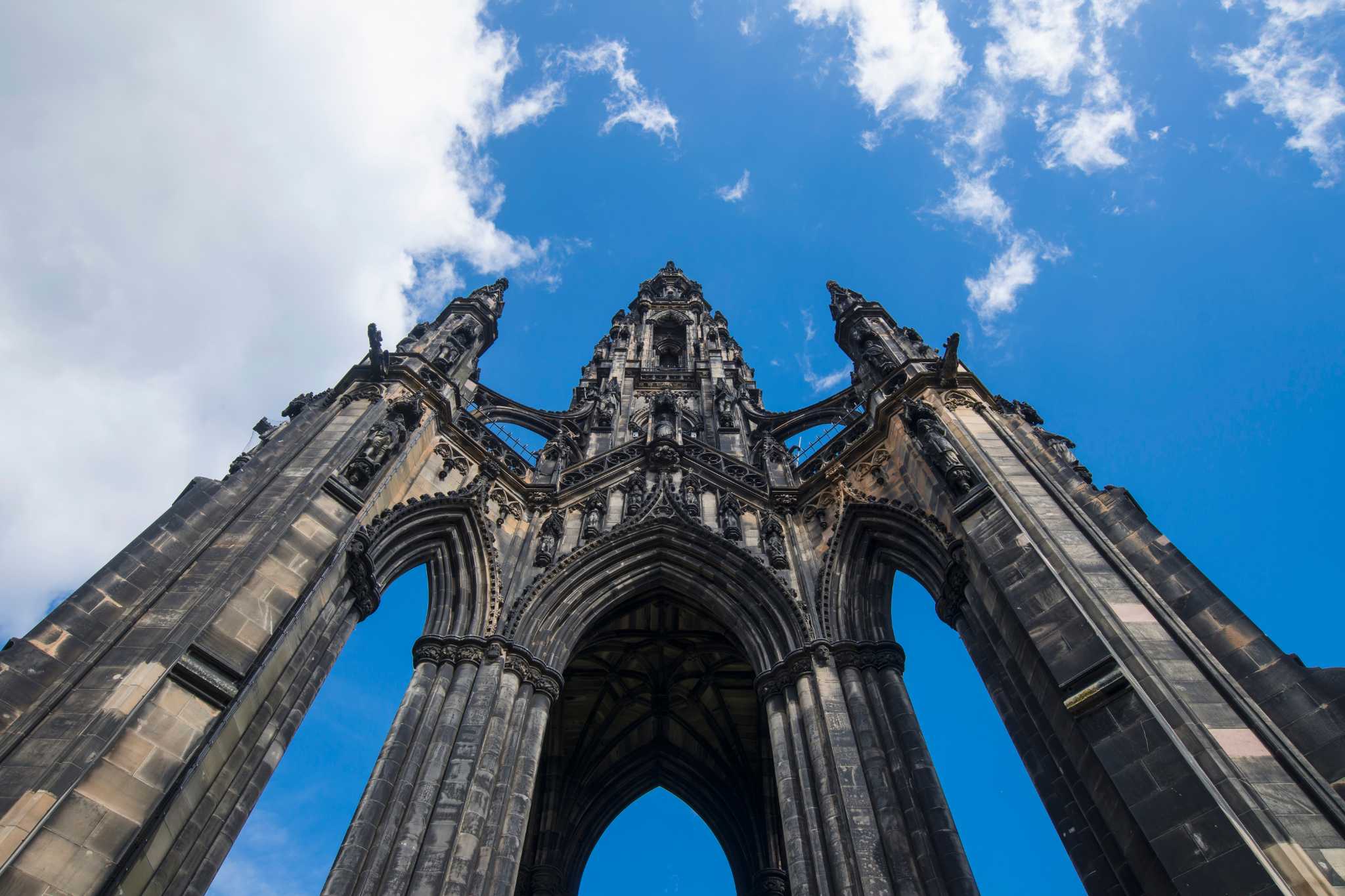 When Sir Walter Scott died in 1832, Edinburgh’s great and good came together to agree on a fitting monument. In 1836, an architectural competition was launched, inviting designs for an appropriate memorial. Two years later, the trustees approved the design submitted by George Meikle Kemp, and construction began in 1840. Kemp’s winning design featured 64 figures representing various characters from the writer’s novels. At 200 feet tall, the Scott Monument is the tallest monument to a writer anywhere in the world. 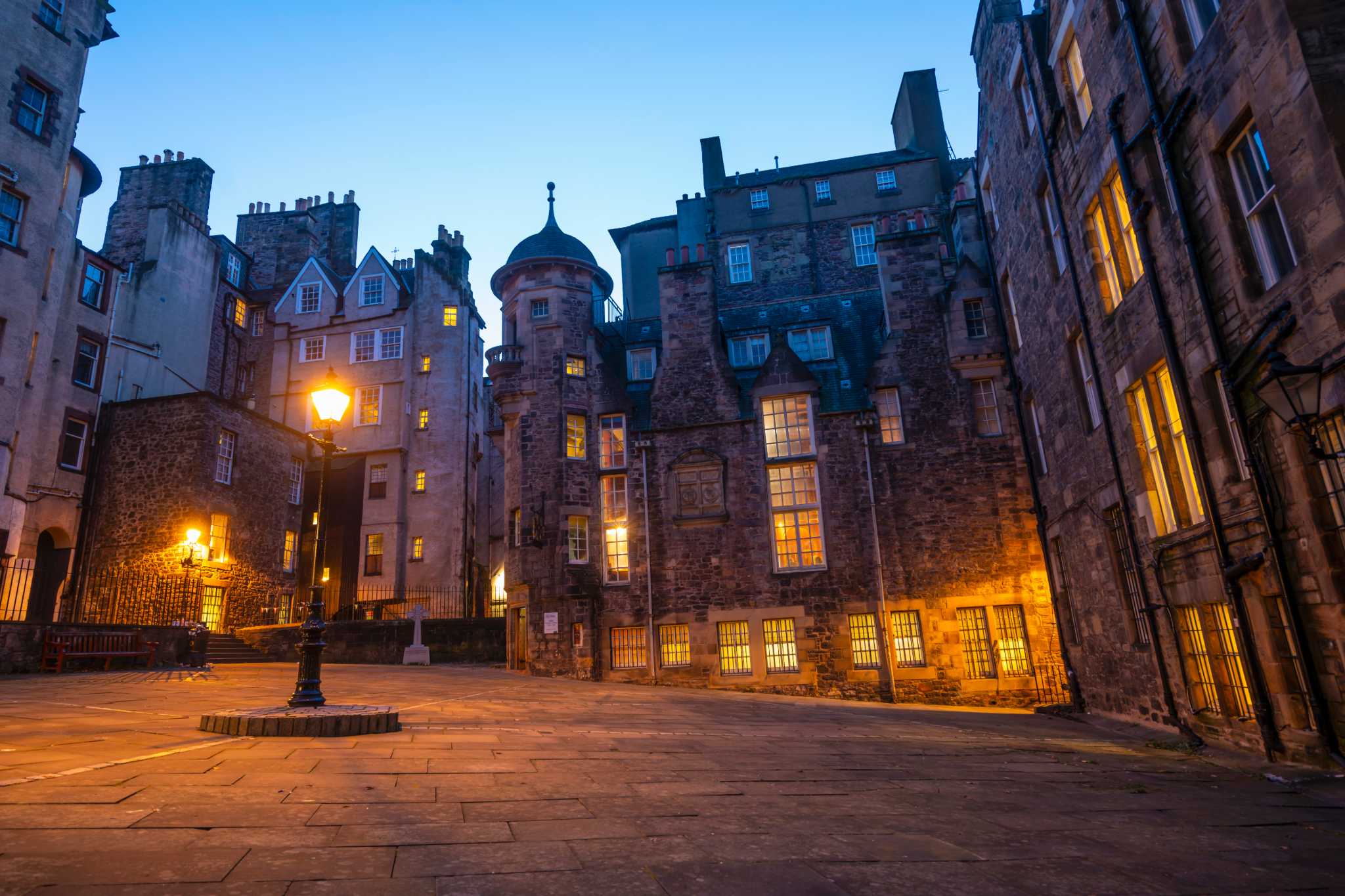 The Writers’ Museum in Edinburgh celebrates the lives of three giants of Scottish literature – Sir Walter Scott, Robert Burns and Robert Louis Stevenson. The museum contains the printing press on which Scott’s Waverley novels were first produced. Outside in Makars’ Court, you can see famous words by other Scottish writers inscribed into the flagstones. 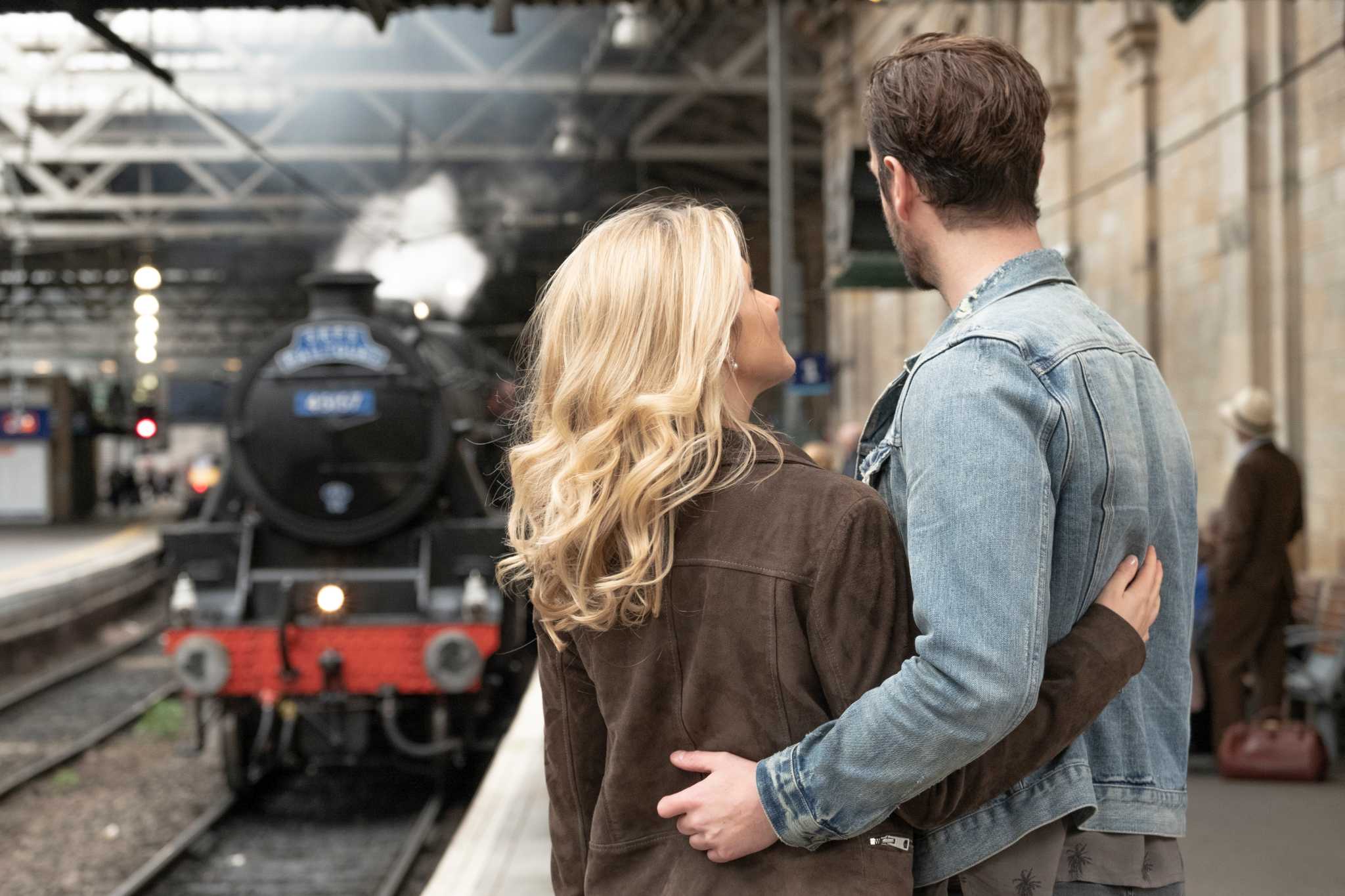 Edinburgh Waverley Station is the city’s main railway station and where many people first enter the city. It sits in a steep narrow valley between the Old and New Town and is the only station in the world to be named after a novel, Scott’s Waverley. It is a common departure point for day trips & day tours from Edinburgh. 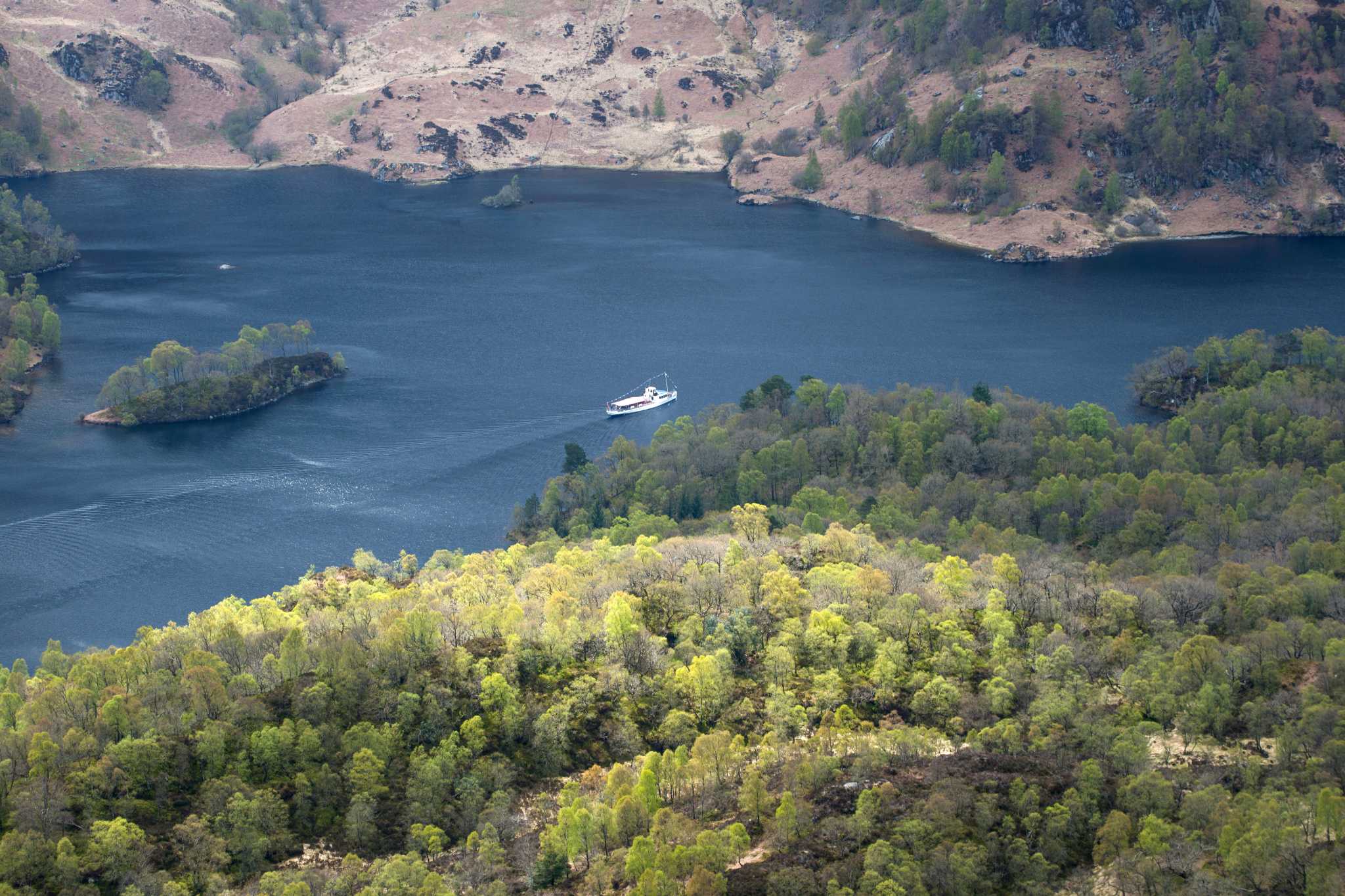 The beauty of Loch Katrine has long inspired literary figures, including Sir Walter Scott who began writing his famed poem Lady of the Lake in 1810 after visiting. It also inspired the romantic poets, Samuel Taylor Coleridge and William Wordsworth. Launched in 1899, a steamship named after Scott still ferries passengers up and down the loch from the Trossachs Pier. 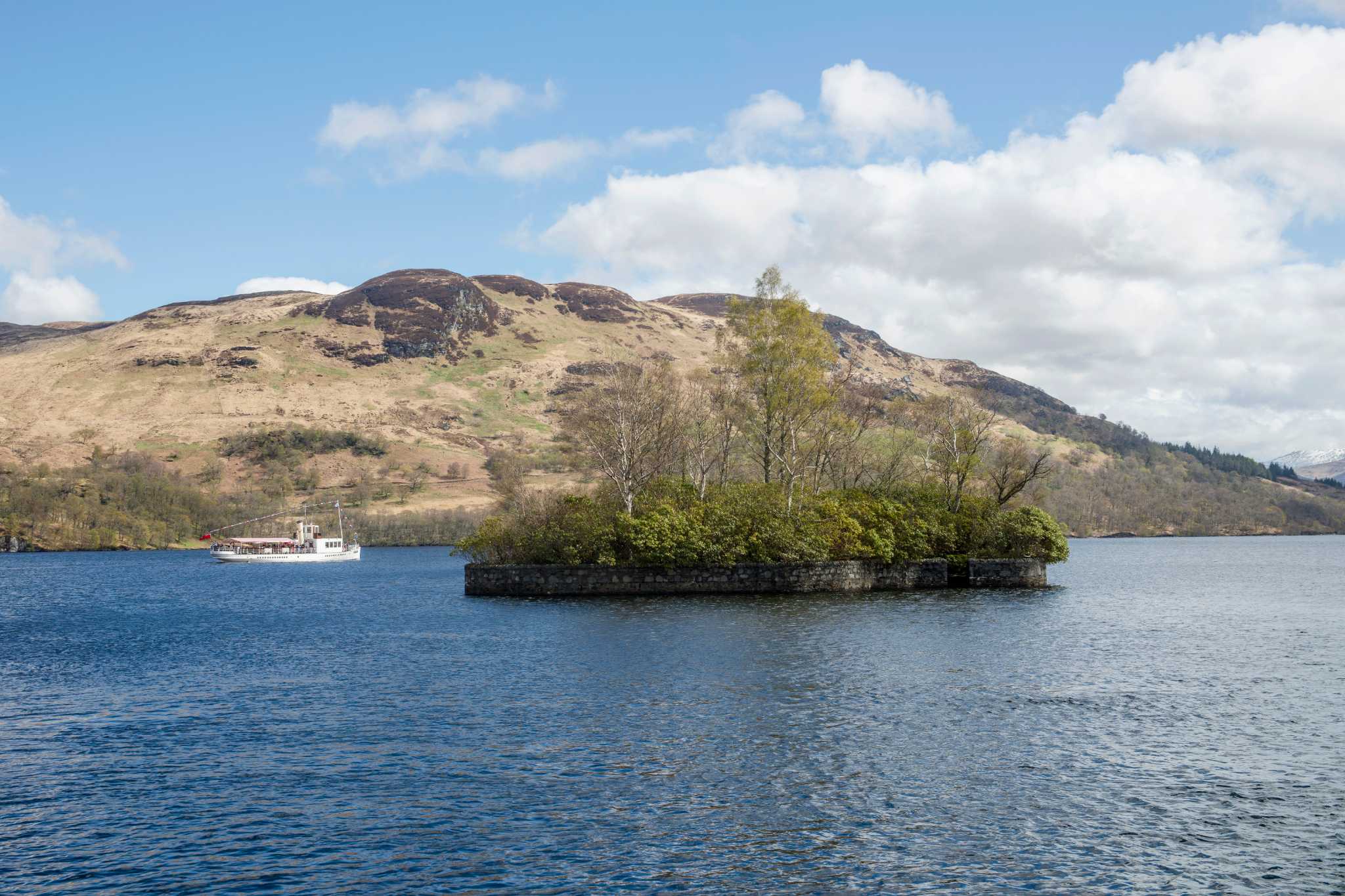 The countryside around Loch Katrine, including Balquhidder and Callander, was a familiar haunt of the famous folkloric hero Rob Roy MacGregor. Sometimes characterised as the Robin Hood of the north, others would argue that this hero status was a direct result of Scott’s depiction in his novel Rob Roy! A cave near Loch Lomond was thought to have been used by Rob Roy during his cattle rustling years and his grave is beside the old Victorian parish in Balquhidder. 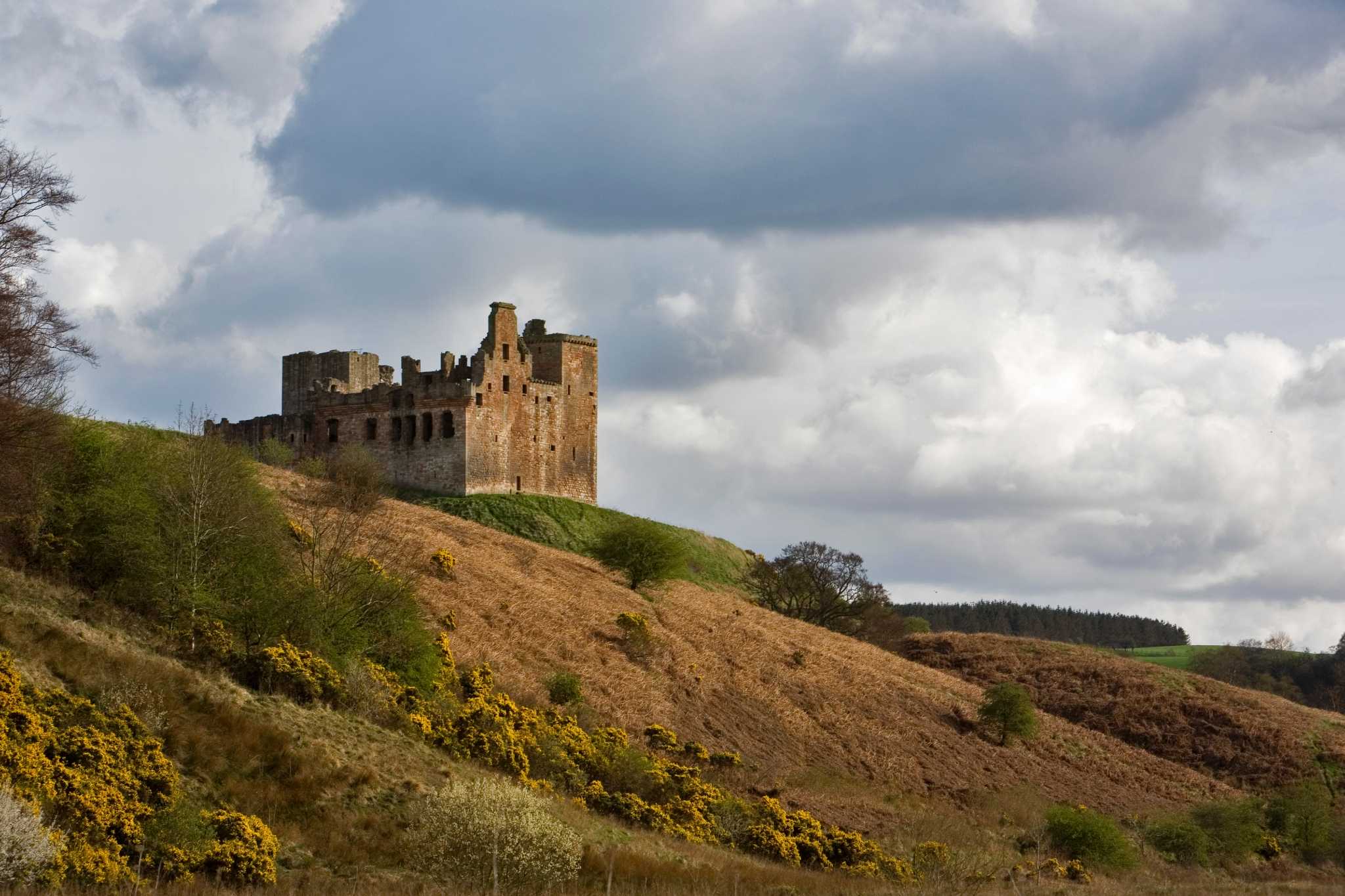 The atmospheric ruins of Crichton Castle are a fantastic sight. They comprise the remains of an early 15th century tower house that was upgraded and enhanced over the centuries. The castle features in Sir Walter Scott’s Marmion and was painted by JMW Turner in 1818. Before then, the remains had become a forgotten ruin until Scott’s writings re-kindled interest. 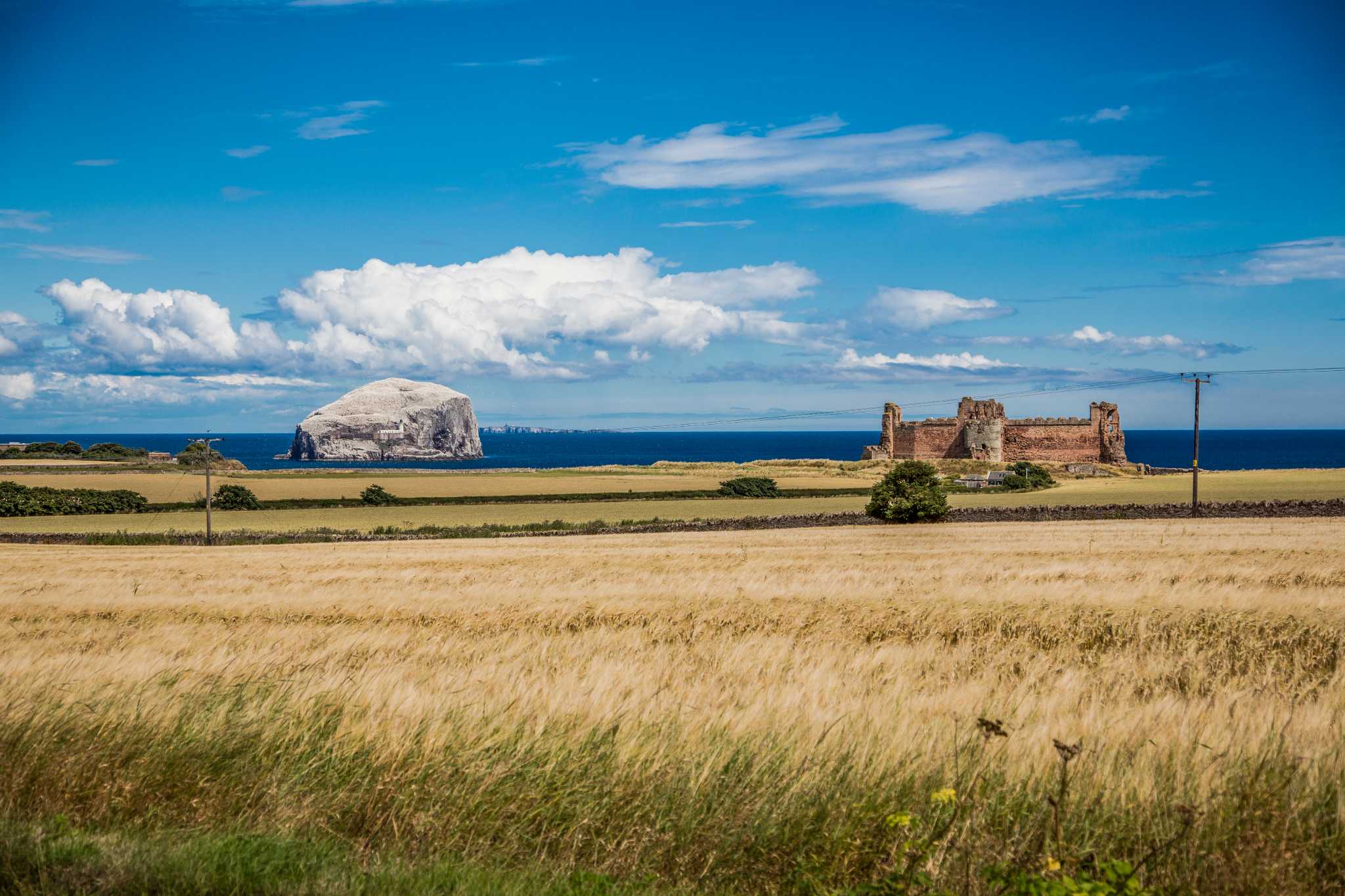 Another dramatic Scottish castle that features in Scott’s poem Marmion, Tantallon Castle is one of the country’s most picturesque. But it was not only the dramatic setting of the castle that would have interested Scott – its turbulent history fascinated him too. Witness to much military action through the centuries, this castle pops up again and again in Scottish history books. 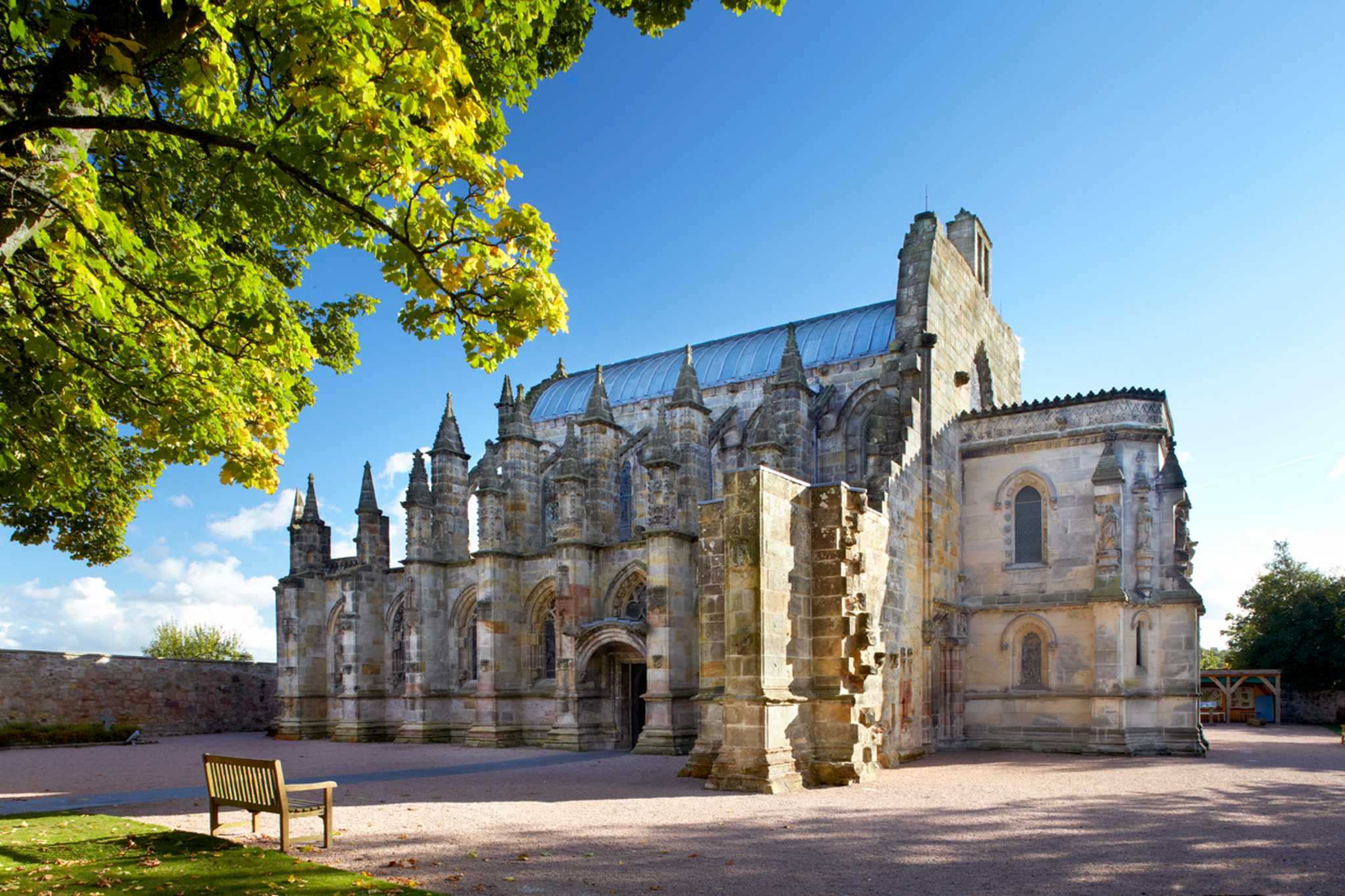 You may be familiar with Rosslyn Chapel from Dan Brown’s The Da Vinci Code. But it was Walter Scott’s ballad, The Lay of the Last Minstrel, about a 16th-century Border feud, that first brought Rosslyn Chapel to wider public attention, turning it into a popular visitor attraction. Scott’s biographer, Edgar Johnson, wrote that: ‘In the entire history of British poetry there has never been anything like the popularity of The Lay of the Last Minstrel.’ 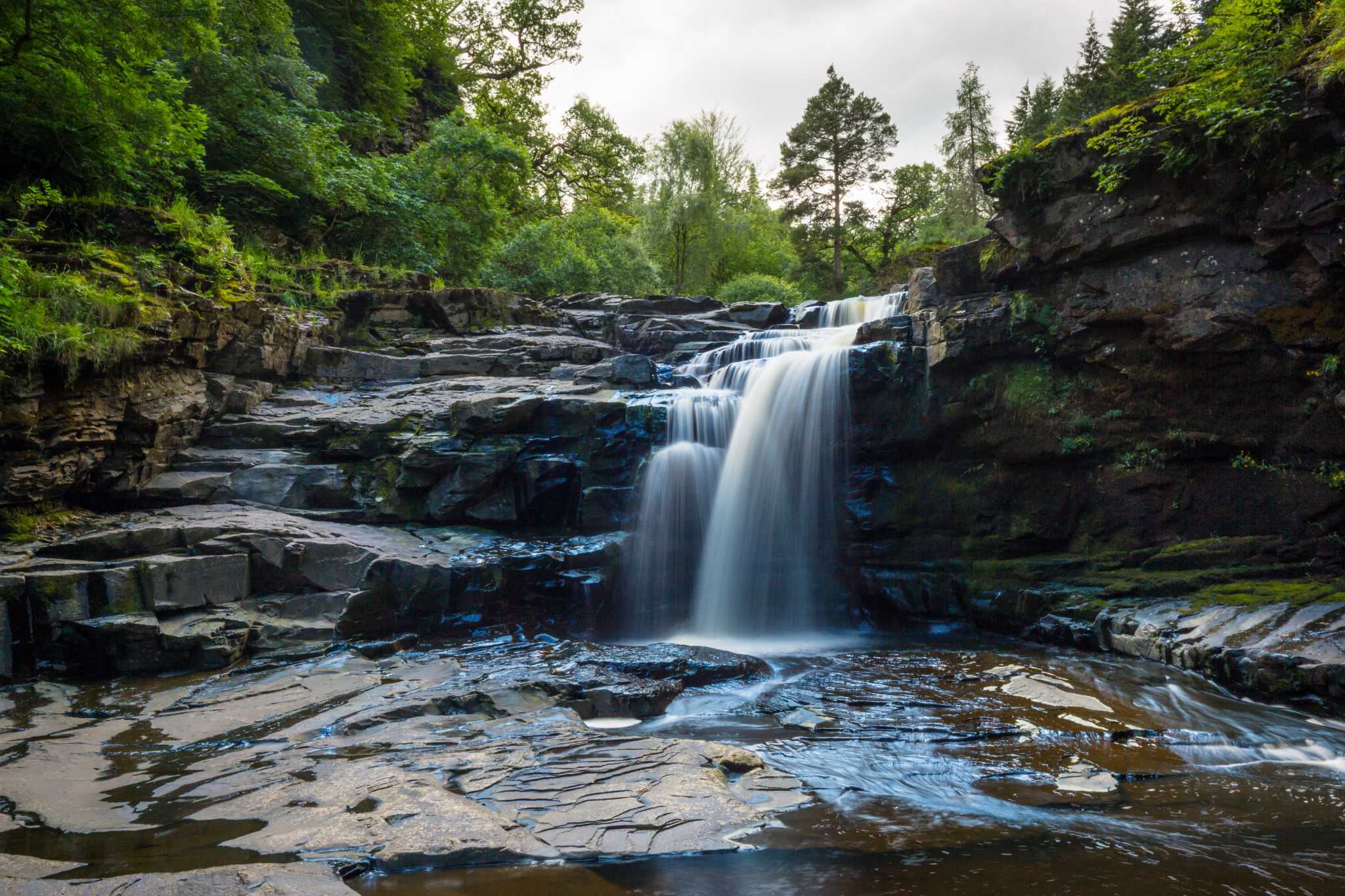 This beautiful part of Scotland had an effect not just on Walter Scott, but again on other romantic poets such as Wordsworth and Coleridge. They visited this South Lanarkshire landmark together and were inspired to write poetry. The Falls of Clyde Visitor Centre features exhibits about the waterfalls, woodland and the area’s animals, including a unique bat display. 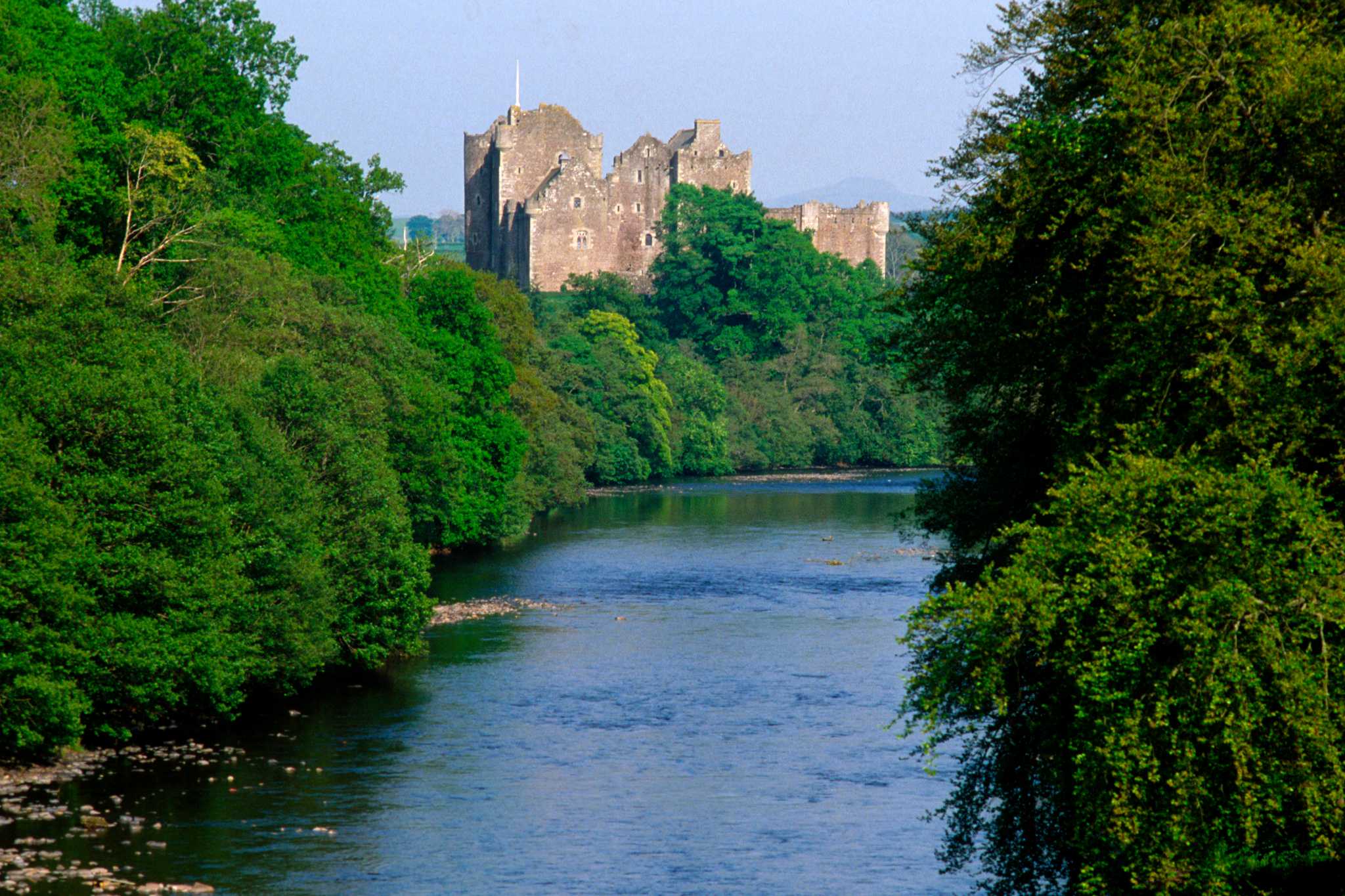 This Stirlingshire castle is a forbidding stronghold. During the 1745 Jacobite Rising Doune Castle was used as a prison for Jacobites. In Scott’s novel Waverley, the protagonist Edward Waverley is brought here by the Jacobites. Scott describes a ‘gloomy yet picturesque structure’, with ‘half-ruined turrets’. The castle was also used as a set for Game of Thrones and Outlander. 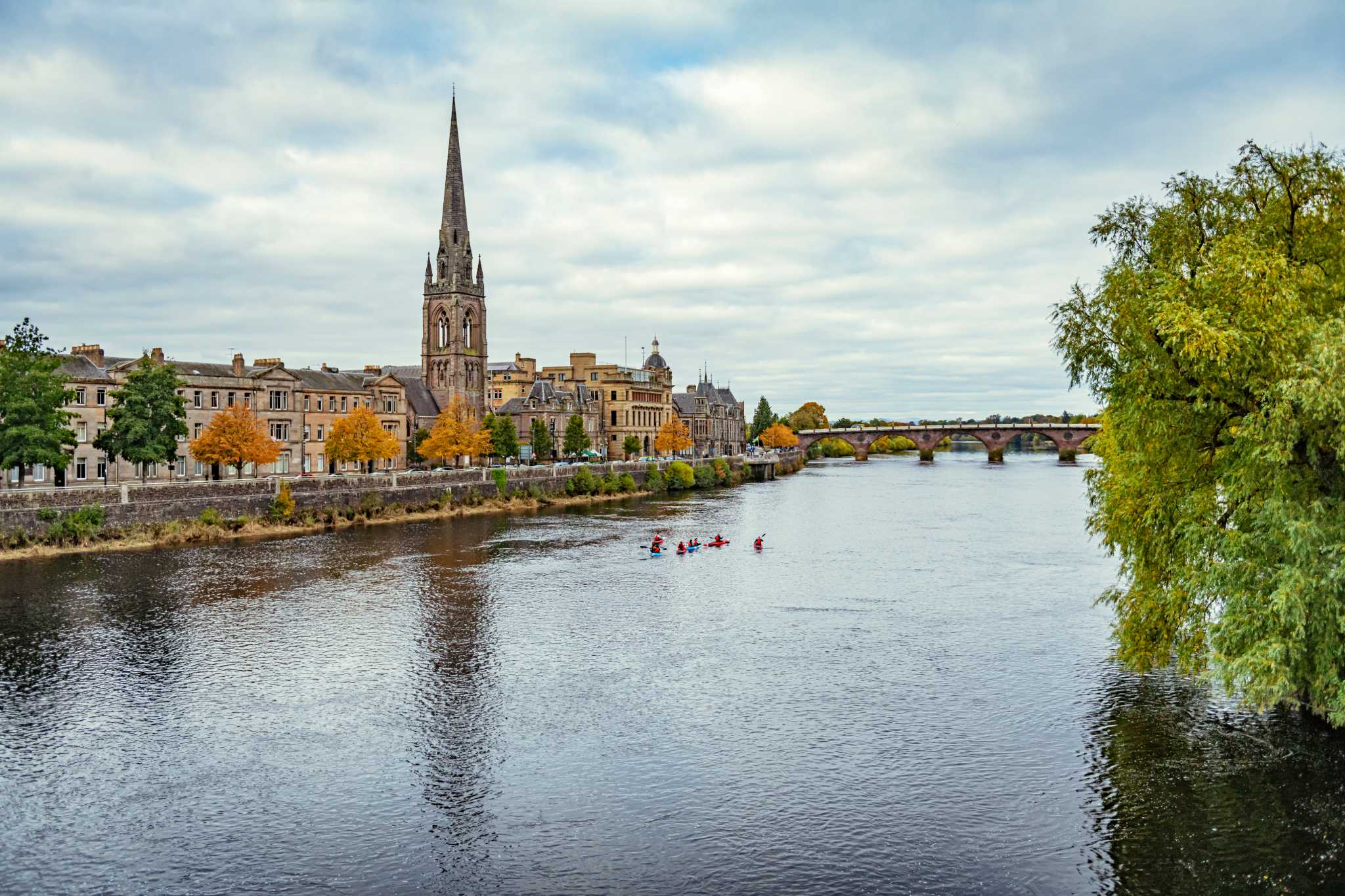 The Fair Maid of Perth was published in 1828 by Scott to much acclaim. The novel is set in Perth (known at the time as Saint John’s Toun) and chronicles the strange story of the Battle of the North Inch. The battle involved 30 men chosen from two clans to fight in front of spectators in 1396. There is a statue of The Fair Maid of Perth at the east end of Perth High Street. 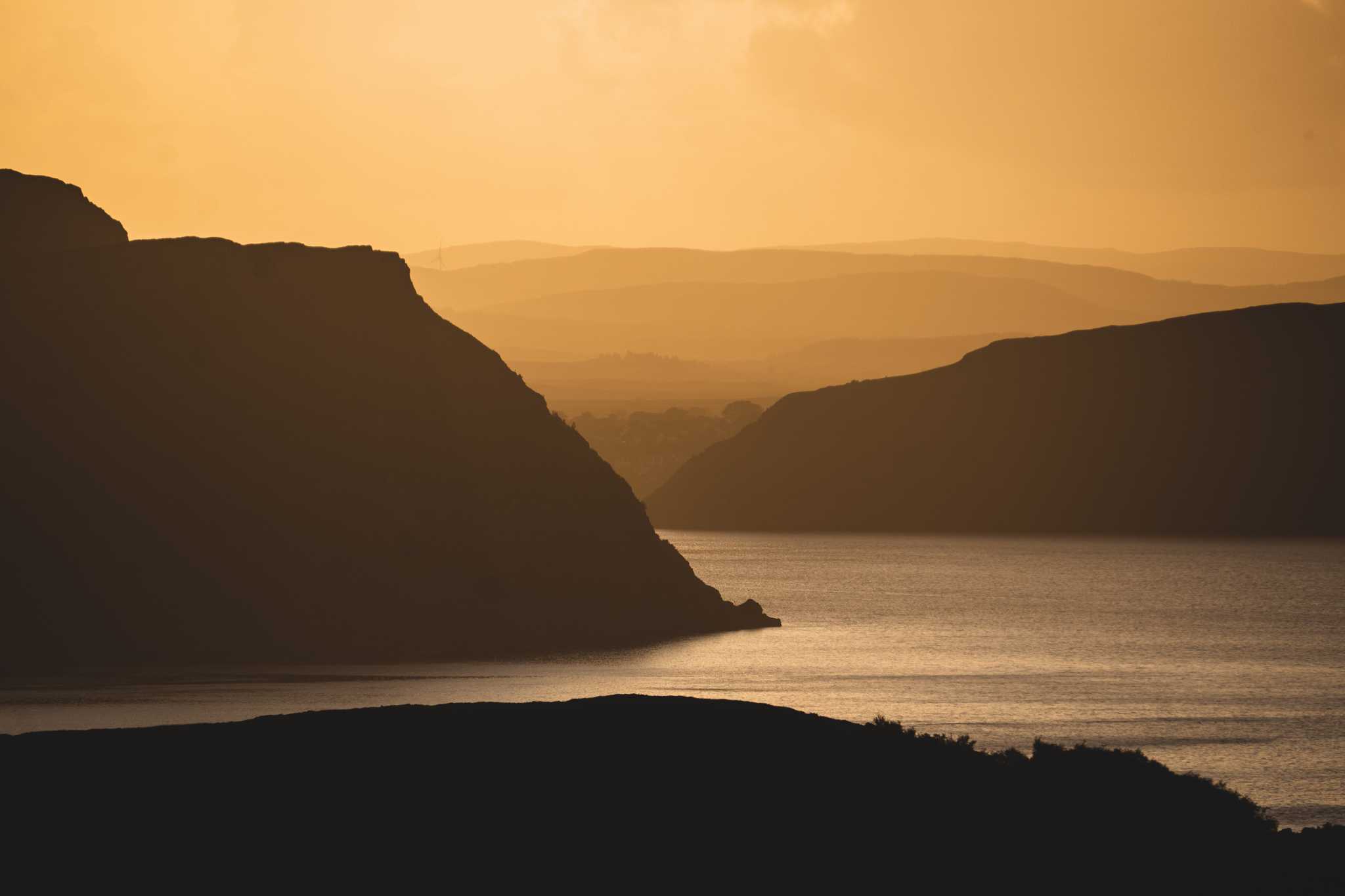 Sir Walter Scott visited the Cuillins and Loch Coruisk on Skye in 1814 and naturally the island inspired him to write more poetry. Scott’s subject this time was Robert the Bruce, his exile, and his eventual triumph at Bannockburn. The poem was called The Lord of the Isles. Strong on scenery and action, the poem didn’t have the success of his earlier poetic works. But by then his efforts at fiction were about to take off! 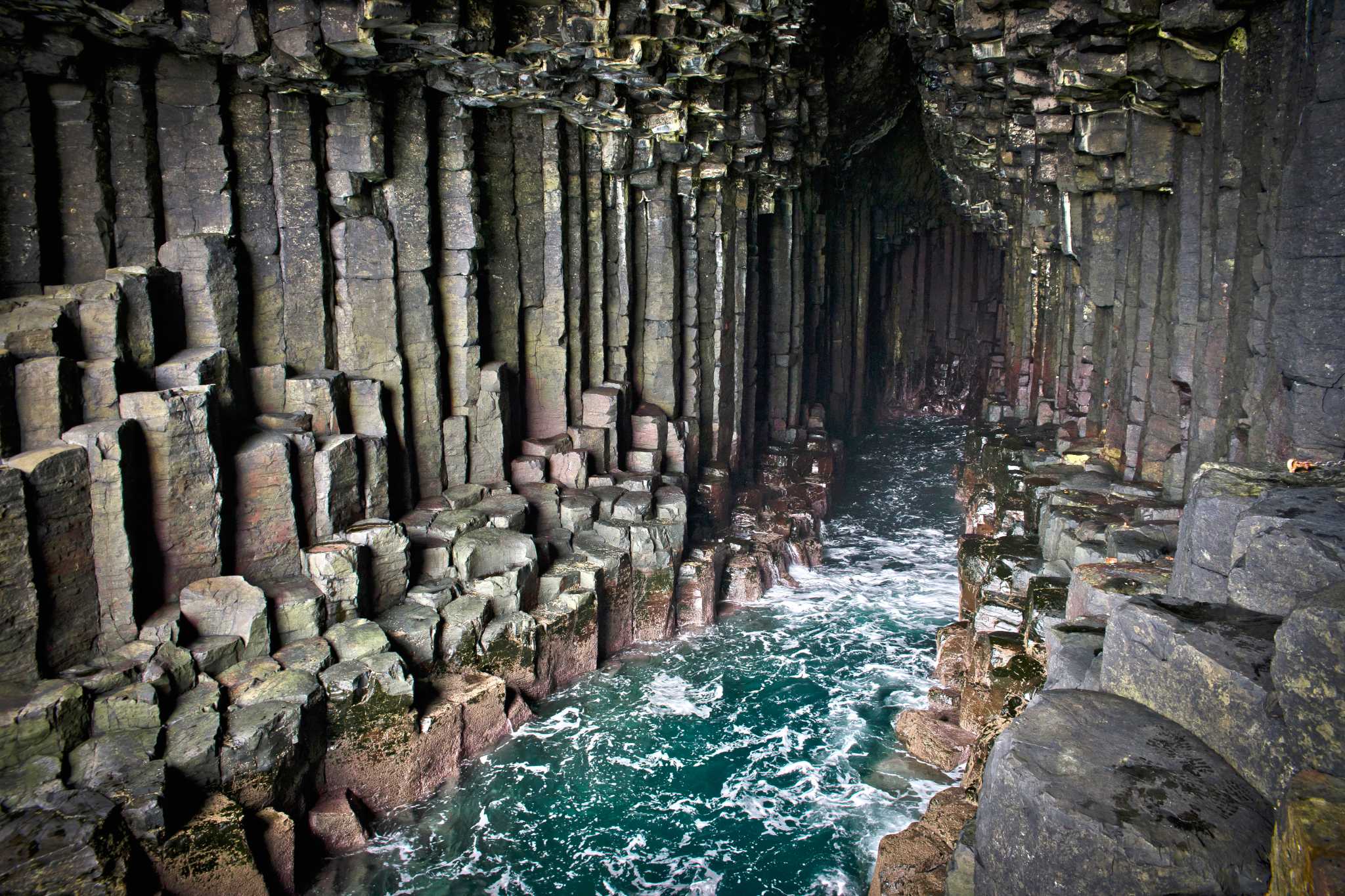 During the same voyage to the islands off the west coast of Scotland, Scott visited Staffa and Fingal’s Cave which also features in The Lord of the Isles. The poem was composed at a feverish rate with all the impressions of the islands fresh in his mind. The uninhabited island of Staffa is home to the famous Fingal’s Cave.

Scott also went as far north as it is possible to go in Scotland – quite a journey at the time –up to Orkney and Shetland. The standing stones and ancient architecture of the northern isles provided source material for his 1821 novel The Pirate. Scott based the story roughly on the life a John Gow, a notorious pirate born and raised in the Scottish north!

For more information on literary Scotland find some great book recommendations on our Scotland in Literature page. Follow @walterscott250 on Facebook and Twitter and use the hashtag #WalterScott250 to share all things Walter Scott.