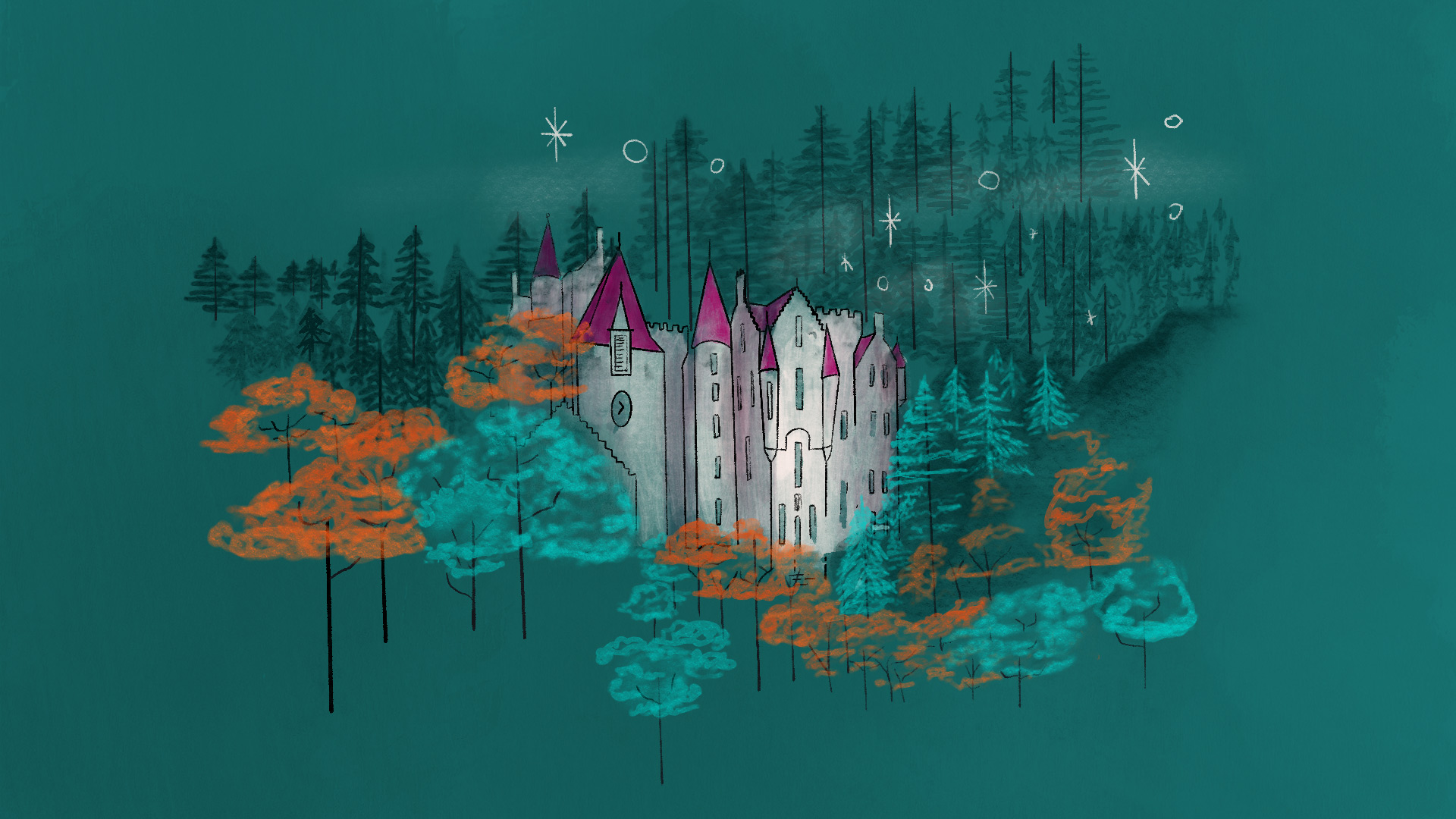 Halloween season is upon us, so what better time than now to explore Scotland’s world of witches. Uncover the stories and tales of mythical and alleged witches old and new that have made a lasting impression on Scotland’s turbulent history.

During Scotland’s Year of Stories, delve into folk magic and folklore, explore witchcraft markets, centuries old memorials, and haunted attractions to uncover the country’s stormy past and fascinating tales.

Scotland boasts many witchy locations and experiences to get involved in. Why not follow along our brand-new Witch Trail map to explore even more locations and spooky sites?

This unique little shop is full of everything an aspiring witch could need and want, and is aptly located on a street named Candlemaker Row in Edinburgh. From scented candles, crystals and intriguing books to tarot cards, herbal oils and ritual kits, Black Moon Botanica stocks a range of spooky goods to add to your collections.

Combining the finest of Scottish ingredients, with a touch of magic of course, The Spice Witch conjures up a range of award-winning artisanal chutneys, relishes and mustards.

Whet your palette with an intriguing blend of flavours – from the aromatic mango and chilli chutney to the sweet and tangy smoky tomato relish – each one is guaranteed to turn heads and has already won five Great Taste Awards to date.

The Spice Witch is based in East Lothian but stock their tasty products in delicatessens and independent shops across Scotland, including Aberdeenshire, Dunbar, Edinburgh, Fife, Haddington, Isle of Mull, Jedburgh, and Lairg, to name a few.

The Witches’ Well can be found at the foot of Edinburgh Castle and marks the spot where over 300 women accused of witchcraft were burned at the stake. This cast iron fountain and plaque memorialises those executed, who were denied a proper burial due to the accusations, so their remains were often left where they died.

It is a small and easy site to miss amongst the bustling atmosphere of the Royal Mile, but holds great significance as, during the 16th century, more women were murdered at this site than anywhere else in Scotland.

This annual festival takes a deep dive into Scotland’s traditions during the Celtic lunar calendar and fire festivals. The largest of its kind, Beltane Fire Festival takes place on Calton Hill in Scotland’s capital. The festival consists of a procession, starting at the National Monument and journeying anti-clockwise around the path, meeting various groups along the way. The procession is driven by the beat of drums and at the head is the May Queen and the Green Man, followed by a parade of characters who are linked to them and the Celtic traditions.

The procession comes to an end with a huge bonfire being lit and the parades and communities of people coming together for warmth, food and drink.

Find out about more fire festivals in Scotland

Head to Forfar in Angus where the Meffan Museum & Art Gallery will give you a fascinating insight into Scotland’s past. Browse exhibitions that recreate an old, narrow cobbled street, called The Vennel, where you can see inside traditional shops, including Peter Reid’s sweet shop, a knockmaker’s workshop and a baker’s shop.

You can also stop to learn more from displays detailing the execution of the women accused of witchcraft in the Forfar Witch Hunts of 1661-1666.

Located in Dunning, just west of Perthshire, Maggie Wall’s Memorial is a mysterious monument where a woman, whose records say never existed, was burnt alive for supposedly being a witch.

Standing around 20 ft high, topped with a cross and decorated with gifts left by visitors, the memorial is also branded with ‘Maggie Wall burnt here 1657 as a witch’ in white lettering. Another mystery surrounding this is that there’s no record of the monument itself until 1866, though a forest surrounding the monument, called Maggie Walls Wood, was documented as of 1829.

Grissell Jaffray was a respectable Dundonian woman before she was accused of witchcraft and burned at the stake, and was reportedly the last person burned for so-called witchcraft in Dundee.

The records relating to the accusations have since been lost, however the names of the three responsible were leading ministers in the Dundee Presbytery at the time: Harry Scrymsour of St Mary’s, John Guthrie of South Church and William Rait of Third Charge (now St Paul’s). As well as the plaque on Peter Street as part of Dundee Women’s Trail, you can see a flame mosaic depicting her punishment, both of which allegedly mark the spot of her death.

If you’re looking for a quirky folklore experience, you’re in luck! Cailleach’s Herbarium uncovers the realms of Scottish folklore, herbalism and folk practices, led by Scott Richardson-Read, the co-creator and researcher behind the Taibhsear Collective that brought to life Edinburgh’s ongoing annual folk scene.

Read up and learn all about foraging, folk magic, folk festivals and more, as well as the magical history of Scotland.

A post shared by The Cauldron Magical Pub (@thecauldronpub)

Fancy tapping into your inner Harry Potter or Hermione Granger and conjuring up some magic potions? Head over to The Cauldron Co. on Frederick Street in Edinburgh where you can immerse yourself in a cocktail class, complete with a cloak, wielding a working magic wand and using molecular mixology to brew drinkable elixirs.

Here you can also tuck into a Wizard Afternoon Tea where you can get involved in an interactive tea brewing experience. Not just your average afternoon tea, The Cauldron Co. let’s you brew two different types of teas, the first focuses on transfiguration and the second is a fun experiment session to help you find the perfect blend for your palette.

It’s a great afternoon experience to get you into the Halloween spirit, and with gift cards and vouchers on offer, it makes an ideal gift or present too.

If you’re looking for somewhere to stay with mystery and history lurking overhead, you’re in the right place. Witches Craig Caravan & Camping Park is situated at the foot of the Ochils, a place that has had the rumour of witches associated with it for centuries.

The nearby Logie Kirk dates back to 1178 and it is said that a coven of witches were based in the hills behind the kirk, the most prominent of which is Carly Crag, or the Witches Craig. Legends and tales have circulated here for some time, including a minister claiming he saw the Devil dancing with his witches.

The presence of so-called witches in the area can still be seen today, with names such as Warlock Glen and Devil’s Loch found nearby.

12. The Root of Magic, Glasgow

A post shared by The Root Of Magic (@therootofmagic)

The Root of Magic is home to a Potions Bar, the smallest bar in Glasgow, a Potions Café, Potions Cocktail Classes and children’s Potions Classes in the heart of Glasgow City Centre.

If you’re planning a night on the town and fancy stopping by this magical little spot it is recommended you book a table in advance, or if a day exploring Glasgow has left you peckish, stop by for a tasty bite to eat at the café. Or if you want to get in touch with your inner witch or warlock, book into a potions making class for the ultimate spooky experience.

Explore The Root of Magic

If you feel like embarking on a bit of an adventure, head to Orkney.

Uncover all the nooks and crannies of the historical town of Kirkwall with a witchy walking tour. Listen to all the intriguing tales and stories of Orkney, learn about the earliest Viking settlement of Kirkjuvagr and see the original Norse harbour, tour the most northerly cathedral in Britain – St Magnus Cathedral, and much more on this eye-opening excursion.

Listen to the fascinating insight of Orkney’s history that dates back centuries, with dozens of attractions and locations to visit along the way.

We hope this has inspired your inner witch or warlock to explore Scotland’s ancient history around witchcraft and the many legends that are still told to this day.