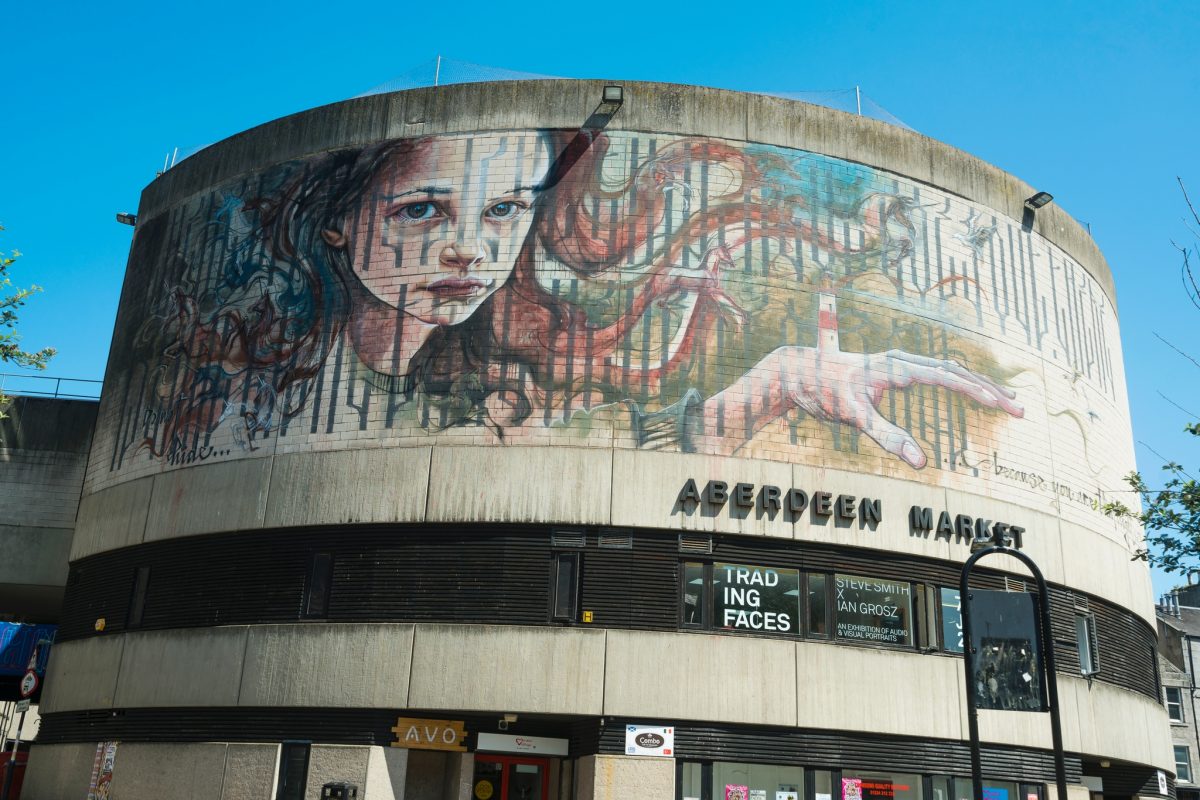 Set on Scotland’s north-east coast, Aberdeen is a city which meets the North Sea with its imposing granite architecture glimmering silver in the sunlight. It is also a culturally rich city, a place which has played a starring role throughout much of the nation’s history, and somewhere you can always expect the very best in Scottish hospitality.

Here are some of city’s coolest hotels where you can spend a revitalising break discovering the city’s intriguing streets and colourful districts, taking in its best-loved attractions, first-class cafés and restaurants, and lesser-known gems.

THE MERCHANT QUARTER & THE GREEN

The Merchant Quarter and The Green have been Aberdeen’s bustling heart and soul since the 12th century. The Green is also a major religious heritage site. Carmelite and Trinitarian orders built their impressive stone friaries to the south of the Green near Guild Street. The Merchant Quarter’s location near the shore also ensured its growth as a major trading hub attracting traders from around Europe. Today both are fashionable and vibrant districts which retain their historic character, and which boast the Carmelite Hotel and trendy dining spots as well as an array of bars and independent shops.

Street secret: The Carmelite is as much a joy to explore as the nearby Aberdeen Maritime Museum and Aberdeen Art Gallery. Admire its magnificent exterior and take in interior details such as coloured glass depictions of heraldic symbols including the pre-1603 Royal Scottish Coat of Arms, the Royal Shield and decorative thistles and roses.

Stay: Carmelite Hotel, Stirling Road. Named after the religious orders who inhabited this area in the Medieval period, this stylish hotel is housed inside one of the few secular buildings in Aberdeen designed in the Gothic style.

Market Street lies within the city centre’s Merchant Quarter with Union Street. Lined on either side by attractive Victorian buildings, it’s a most convenient spot to base your stay in Aberdeen, allowing easy access to major shopping thoroughfares and many of the city’s favourite pubs and restaurants. You can also walk the short distance to the Aberdeen Maritime Museum, located on the historic Shiprow.

Street secret: The Craftsman , 2 Guild Street. Start and end the day with a visit to this independent coffee and ale house. Enjoy a fine selection of craft beers and single-origin coffee from bean roasted on site.

Stay: Aberdeen Douglas Hotel, 43-45 Market Street. Built in 1848 at the height of the Victorian era, the Aberdeen Douglas is one of the city’s oldest and best-loved hotels. This local landmark is instantly recognisable by its Art Deco copper-clad entrance canopy and boasts understated, stylish interiors, and relaxed dining in Molly’s Bistro serving fresh local cuisine.

Admiring Aberdeen's skyline from Aberdeen Art Gallery. 🏙 Have you visited the newly re-opened gallery yet? 2020 is your year to check it off the bucket list ✔😊 #visitABDN #beautifulABDN #winterABDN #Aberdeen #VisitScotland #ScotlandIsNow #Scotspirit #Scotland #travelscotland #scotlandsbeauty #scotland_insta #scotland_greatshots #scotlandlover #madeinscotland #lovescotland #igscotland #lovegreatbritain #loveUK #globalcapture #tourtheplanet #passportpassion #photographer #picoftheday Reposted from @gallivantinglaura (@get_regrann) – Looking ahead to 2020… 📸 During the Christmas chaos at home I managed to squeeze in a visit to the recently refurbed Aberdeen Art Gallery. They've done a great job, worth a visit #seeninthedeen #aberdeenartgallery – #regrann

Another convenient area to stay in Aberdeen is Justice Mill Lane. This quiet and unassuming street in the city centre owes its name to two medieval mills which were situated in the vicinity during the very earliest days of Scotland’s legal system. Union Square Shopping Centre, Union Terrace Gardens and Aberdeen Art Gallery are both accessible by foot in just over 10 minutes.

Street secret: The Battle of Aberdeen – also known as the Battle of Justice Mills and the Crabstane Route – was fought here in 1644. This fierce clash between the Convenanters and the victorious Royalist forces is depicted in the historical novel And No Quarter (1937) by Maurice Walsh.

Stay: Park Inn by Radisson, 1 Justice Mill Lane. This budget-friendly hotel offers a comfortable stay in the city centre. It is also located a short distance from Langstane Place where you can choose from a trio of excellent cocktail bars: Orchid, Dusk and The Spiritualist.

The Queens Road is set in the heart of Aberdeen’s west end and is one of the city’s most sought after addresses thanks to its elegant listed granite buildings. Home to high-end hotels, restaurants and coffee shops, the street forms part of the city’s Granite Trail which highlights the architectural legacy of Aberdeen’s granite industry, spanning everything from working-class tenements to dramatic monuments and the grandest townhouses.

Street secret: Enjoy your proximity to some of Aberdeen finest granite architecture. Admire the large 19th century townhouse No. 50 which was constructed by the same mason responsible for much of the west end and Marischal College. On the south-west corner stands an equally impressive former bank which became the home of Queen Victoria’s photographer, George Washington Wilson. While opposite is the beautiful sandstone Rubislaw Cathedral.

Stay: Malmaison Aberdeen, 49-53 Queens Road. Step beyond the grand granite façade of this modern boutique hotel and luxuriate in contemporary rooms with a distinctly romantic ambiance. Head downstairs to the cosy bar for a dram from one of the hundreds of whiskies on display and enjoy a delicious meal in the city’s finest steak restaurant.

Eat: IX Restaurant at The Chester Hotel, 59-63 Queens Road. This luxury boutique hotel is not accepting guests at the moment. But you can still enjoy a delicious meal in the outdoor seating area of their AA Rosette-winning restaurant.

☀️ We are missing seeing you all enjoy our sun terrace and with the industry receiving some positive news yesterday we thought it was time for a short update. At the Ferryhill, we are lucky to have beautiful spacious gardens to enjoy some alfresco food & drinks and we are busy cleaning, preparing & planning for the day we get the green light to open! Of course, we will have all the appropriate social distancing and safety measures in place but there may be some restrictions in the initial stages. We will have some house guidelines to adhere to, the opening hours may be different and it may be a slightly reduced menu than you are used to but we will be trying our very best to make it the Ferryhill you know and love. At this time, we cannot state an exact opening date but as soon as we can, we will let you know. Thank you for your understanding and support! We can’t wait to see you all soon! #FerryhillHouseHotel

Situated in a prestigious conservation area, Bon Accord Street connects a quiet residential district with the city centre. A wealth of amenities including bars and restaurants are located nearby, as well as lovely walks through Duthie Park and Bon Accord Terrace Gardens.

Street secret: The area is located near one of the city’s best-kept secrets: the first stage of the Deeside Way. This scenic long-distance walk begins in Aberdeen and follows the route of the former Old Royal Deeside railway line.

Stay: Ferryhill House Hotel, Bon Accord Street. This former family home offers a tranquil retreat from the hustle and bustle of the city. Set within a period property dating from 1900, it offers pristine en-suite rooms, a luxe wood-panelled bar, private gardens and a large restaurant with an airy conservatory and al-fresco terrace.

Few could have anticipated the impact @hushartist would have when he started sketching out his new mural for Nuart Aberdeen. Positioned on the side of John Lewis, the piece was slowly brought to life with more detail added each day until eventually the two figures were complete but over the course of the week small groups of people would stop to watch, chatting to each other and forming a mini community around the site. This is one of the great aspects of street art on a big scale and the end result, well it really speaks for itself! Photo credit: @bktallman #nuartaberdeen #nuartfestival #aberdeeninspired #hush

This street which borders the Robert Gordon University campus is located just five minutes on foot from  many of Aberdeen’s most popular attractions, sporting and entertainment venues, and various shopping destinations. These include Aberdeen Sports Village and Aquatics Centre, Union Square Shopping Centre and the historic University of Aberdeen campus.

Street secret: Aberdeen is fast becoming Scotland’s street or ‘NuArt’ capital. There are three murals located next to the hotel including a stunning Japanese influenced piece by acclaimed graffiti artist Hush. Follow the street art trail to discover more.

Beautifully Budgeted. . Fabulously affordable. . And the best part? Located right downtown so you won’t miss anything! . Check out the glowing reviews from our guests! . “Brilliant Hotel in an excellent location, great room, really friendly service and most of all the best value for a comfy night’s stay. I can’t complain about anything and would definitely recommend a stay here.” . I can’t wait to see you soon and show you everything our magical little town of Aberdeen has to offer! . Click the link in the bio to start planning your trip now, or send us a message to inquire further! . www.citihotelaberdeen.com . . . . . #hotelaberdeen #aberdeenhotel #hotelscotland #scotlandhotel #hoteluk #ukhotel #aberdeencitycenter #comfortablebeds #hotelbeds #hotellaunge #traveluk #staywithus #mycitiadventure #hotellinen #relax #funtime #hotelstay #granitecity #hotelbreakfast #exploreaberdeen #exploreaberdeenshire #explorescotland #aberdeen #scotlandtravel #visitaberdeen

A visit to Bath Street is like stepping into a time capsule of a bygone Victorian Aberdeen. Following a curved cobbled lane with elegant triangulated tenements on either side, it enjoys a secluded but central location located on the cusp of busy Union Street, Aberdeen’s main shopping thoroughfare, as well as a number of nightlife hotspots. It’s also just a short distance from Aberdeen Art Gallery, the Bon Accord shopping centre, and Aberdeen Harbour.

Street secret: Bath Street is the home of what was the Royal Hotel – now the Citi Hotel. But its history stretches back even further. It was originally founded as the Bath Hotel in 1879 and is one of the oldest establishments in the city. It took its name from the Turkish bath house which is said to have stood on the site.

Stay: Citi Hotel Aberdeen, 3 Bath Street. This “beautifully budget” hotel occupies a splendid listed Victorian building. The simple but tastefully furnished rooms ensure a comfortable night’s sleep allowing you to get the most out of your stay in the city.

Share your city adventures with us on social media! Use #VisitScotland or #OnlyInScotland to give us permission to repost on our social media channels.

9 of the Oldest Places to Stay in Scotland