Awe-inspiring landscapes, romantic castles, white sandy beaches – Scotland has all the right shots when it comes to your photography bucket list. We’ve cherry picked some of our favourite city hotspots for some much-needed travel inspiration. 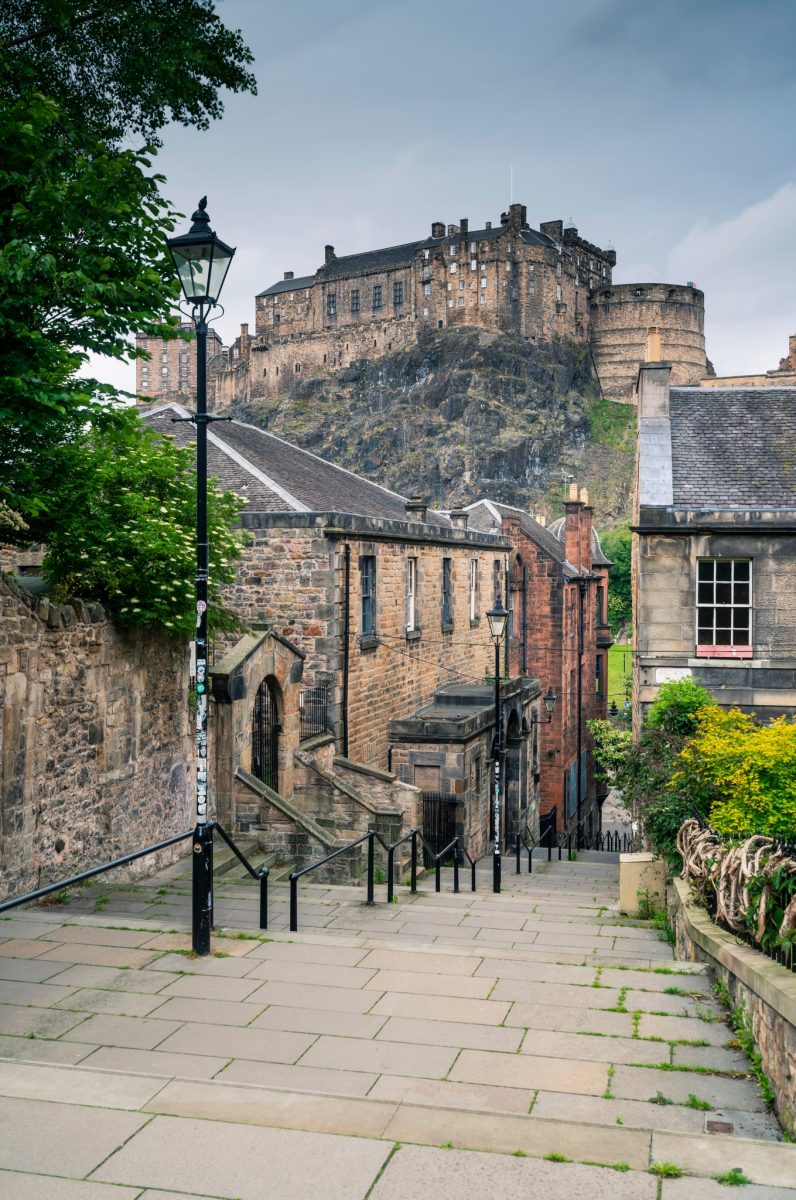 Edinburgh’s city centre is a hub of activity, featuring streets lined with shops, award-winning restaurants and popular visitor attractions right on your doorstep.

The Vennel certainly doesn’t disappoint with its amazing views of Edinburgh Castle. The word ‘vennel’ is an old Scottish word derived from the French word venelle, meaning ‘little street’.

Circus Lane in Stockbridge is just a ten-minute walk from Princes Street and Edinburgh’s shopping districts. You will be in your element posing along the pretty cobbled street.

Kyoto Friendship Garden brings a slice of Japan to Edinburgh and can be found in the grounds of Lauriston Castle. It was created to celebrate the twinning towns of Edinburgh and Kyoto.

Bakehouse Close was used as a filming location in Outlander. Jamie and Claire meet outside Alexander Malcolm’s print shop after years of separation. It is also the best preserved close in the city’s Old Town, giving visitors a great insight into what life was like during the 18th century.

Glasgow’s biggest city is a both sophisticated and brimming with earthy charm. In short, its a joy to photography with its vibrant street art and dramatic architecture.

Mural Trail brings together Glasgow’s amazing street art. Vacant buildings have now been turned into magnificent pieces of artwork, showcasing some of the city’s artistic talent. See the St Mungo Mural at Glasgow High Street painted by Sam Bates, A.K.A Smug. Mungo is Glasgow’s patron saint and is seen here dressed in modern clothes with a robin perched on his finger.

The Cloisters at Glasgow University (The Undercroft) connects the East and West Quadrangles with the doorway leading to the Hunterian Museum and Bute Hall where graduation ceremonies take place each summer.

The Hidden Lane is a great community where you will be able to discover and buy lots of goodies from independent businesses. Enjoy a spot of afternoon tea at Hidden Lane Tearoom and browse arts and crafts in the bright coloured studios – a great bonus for a eye-catching  photo backdrop!

Glasgow Cathedral is a magnificent feat of architecture. It’s the only medieval building on the Scottish mainland to survive the Reformation of 1560 intact. Visitors can marvel at its beautiful stained-glass window panels. 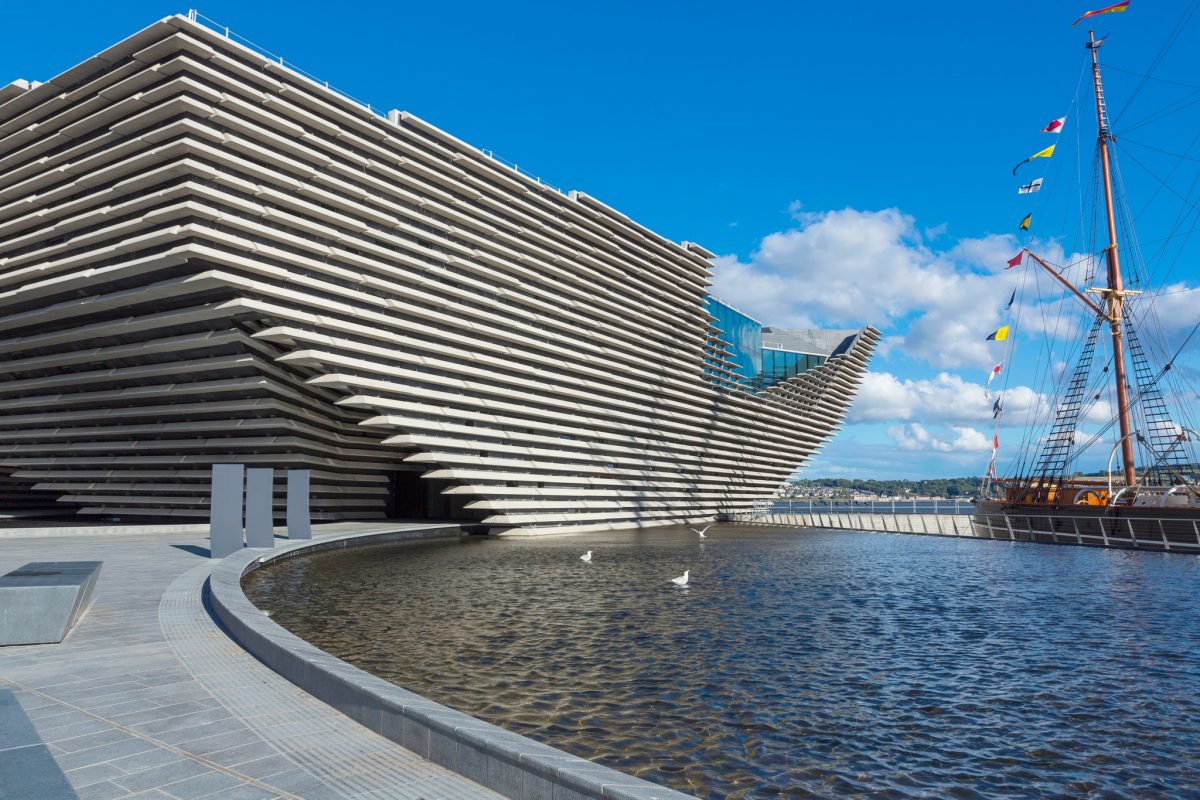 It’s true what they say, Dundee has got style! It’s also proud to be the first and only UNESCO City of Design in the UK.

The V&A Museum is one of Scotland’s most striking building. Its design was inspired by the dramatic cliffs along the northeast coasts of Scotland. Experience the remarkable story of design from the past, present and future through permanent and recurring exhibitions.

Dundee Law is worth the climb to the top. On a clear day, reach the summit and take a panoramic shot where you will be able to see almost 45 miles over the city to Fife, Perthshire and the Sidlaw Hills to the north.

Tay Rail Bridge is a bonnie location for some good snaps to add to your photo collection – especially and sunrise and sunset.

Camperdown Park is home to amazing wildlife, from golden eagles and snowy owls to European brown bears. If you’re looking to explore the woodlands and snap up a few more pics, the trees are a great backdrop for any portrait or landscape shot with the park home to no fewer than 190 species of trees.

With its beautifully preserved Old Town and restored palace atop a rocky crag with the lofty Wallace Monument and Ochil Hills in the backdrop, this small city is stunningly picturesque.

Stirling Old Bridge spans the River Forth and has had its fair share of historical moments, from the Battle of Stirling Bridge in 1297 to the 1745 Jacobite Rising. Today, the Old Bridge remains an important part of the city’s cultural heritage and is used by many pedestrians and cyclists.

The Old Town is a gold mine of hidden gems to photograph. Exploring here almost feels like stepping back in time with its medieval cobbled streets and stone buildings, making it a picture-perfect backdrop. Don’t forget to smile!

The Back Walk at Stirling Castle is one of Europe’s finest urban walkways. Take the scenic view which winds through woodland and keep your eyes peeled to see where chainsaw carvers have worked their magic on a series of impressive wood carvings, including the Stirling Wolf and The Archer and the Deer, with each carving relating back to Stirling’s historical past.

Cambuskenneth Abbey was founded in 1140 by King David I. The abbey set the scene for Robert the Bruce’s parliaments in 1314 and 1326. Although the tower is the only part of the abbey you can see today, it is totally worth a pic during golden hour.

The ‘Fair City’ of Perth more than lives up to its reputation. Nestled between two sprawling parks on the banks of the River Tay, this compact city is a feast for the camera lens.

St Matthew’s Church with its towering spire dominates the city skyline. In fact, it’s one of the most photographed landmarks in Perth, thanks its it position next to the River Tay. Capture its splendour with its reflection the river, surrounded by lush greenery.

Kinnoull Hill is totally worth scaling its dizzying heights for getting the perfect shot. This magnificent woodland is a quiet area for you to set up your tripod and camera where you will be treated to stunning views of the River Tay.

Norie Miller Park has extraordinary wildlife, beautiful gardens and art sculptures dotted around its green space. You’re bound to come away plenty of images to post on your social media. It is also well-known for hosting a series of ‘Walk Night Lights’ throughout the calendar year.

North Inch is impossible to resist if you’re a sucker of cityscape photography. A fantastic example when it comes to glorious view, the Tay Bridge, the city’s rolling hills and its fine architecture play a starring role in every picture you take.

Scone Palace is where Scottish Kings were once crowned. The peaceful and serene woodland and gardens isn’t just photogenic – it’s also a great place for a leisurely stroll or for a nice picnic spot.

Aberdeen is a city of grand granite buildings, historic cobbled streets and a glorious seafront setting overlooking the north sea. With free museums, stylish restaurants and cafés, and heaps of natural beauty, you’ll love uncovering the visual delights the city has to offer.

Nuart Aberdeen add a splash of colour to the city. Since 2017, the city has been showcasing local and international talent through a series of murals that resonate with the city, its surroundings and history. ‘Endangered Dreams’ by Bodalo II on Union Row is just one of the many highlights you can see as you wander through the city streets – a fitting tribute to Scotland’s National Animal.

Persley Walled Garden always has something interesting to see. When the sun comes out to play, take a wander along the nature trail adjoining the River Don and, during the colder months, see the luscious green leaves on the trees turn to fiery golds, reds and oranges.

Loch Muick is an ideal place to watch the sun come up – always a special moment to savour. Have your camera at the ready as the new dawn appears over the tranquil freshwater loch where you will be in a prime position for stunning views. Keep your eyes peeled for Glas-alt Shield which was a hunting lodge built for Queen Victoria in 1868.

Hazlehead Park was originally part of the great hunting forests of Stocket just outside the city. The land was gifted by King Robert the Bruce to thank the townspeople for their support after their victory over the English at the Battle of Bannockburn in 1314. Enjoy woodland walks,  wildlife at the Mini Zoo, and Scotland’s oldest maze.

The pretty city of Inverness boasts a superb location, straddling the River Ness at the northern end of the Great Glen. Most people stop here on their way to Loch Ness, but stay a while and you’ll soon discover this gem of city has so much to see and photograph.

Plodda Falls is the tallest and most thrilling waterfall in the region, plunging over a drop of 151 feet. The new viewing platform at the River Affric offers great shots towards the Glen Affric National Nature Reserve.

Leakey’s Bookshop is is filled with visual inspiration. Established in 1979, it is Scotland’s largest second-hand bookshop with a comfortable seating area for reading to help you relax and escape reality for a little while.

Inverness Botanic Gardens is peaceful spot where you can snap away with abandon. might be the answer. From its Tropical House and wildflower meadow to its Cactus House, there are lots of opportunities to discover new and exotic plants from across the globe, and with free entry what’s not to love?

The Ness Islands that sit in the middle of the River Ness are a picture-perfect paradise for photographers. As the temperatures rise, the rhododendrons will be sure to take centre stage with lively displays of colour, before transforming into a winter wonderland with a festive display of twinkling lights.

Fairy Glen Falls is like stepping into a real-life fairytale! Snap away until your heart’s content to capture its raw beauty. It is also believed that the Fairy Glen was once the scene of a well-dressing ceremony, where the children of the village decorated the pool to ensure that the fairies kept the water supply clean. 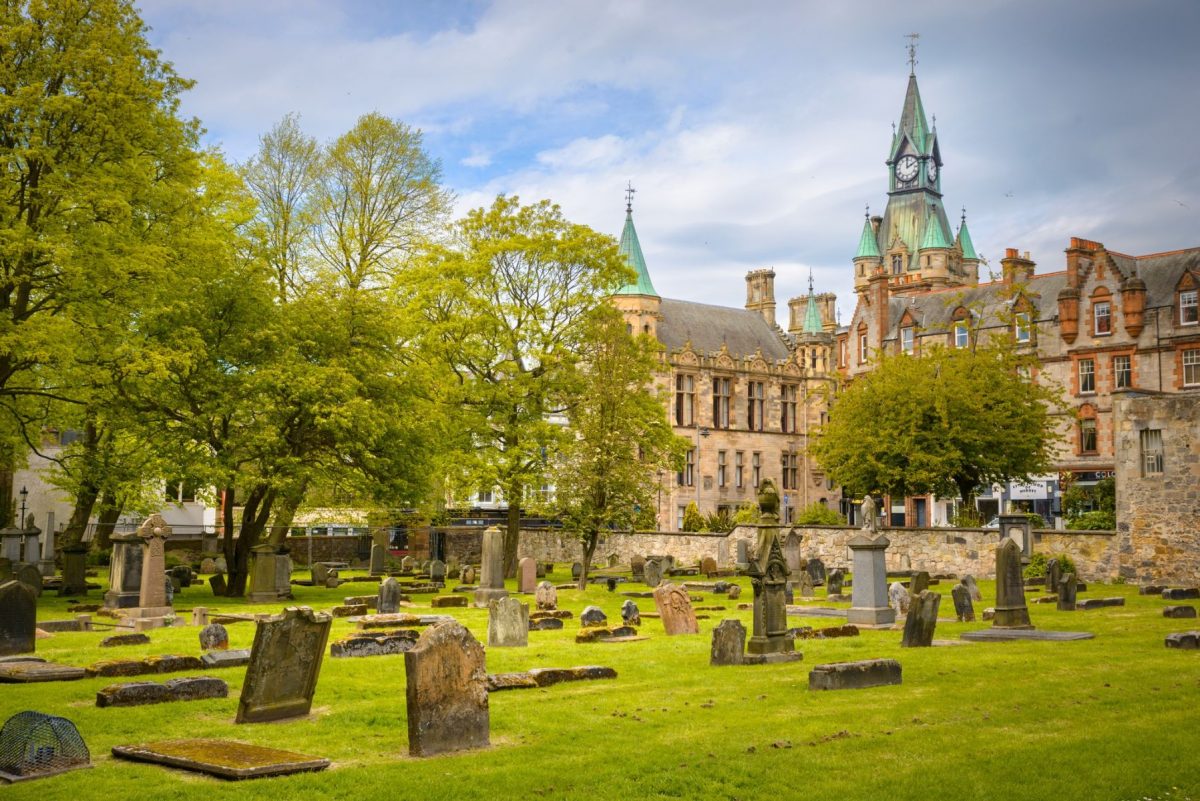 Dunfermline has become Scotland’s 8th city. It was awarded city status as part of HM The Queen’s Platinum Jubilee. Formerly Scotland’s ancient capital, Dunfermline is a city rich in history and aesthetic charm.

Dunfermline Abbey & Palace was founded by David I in the 12th century. Many Scottish royals are buried here, most notably Robert the Bruce whose tomb lies beneath the ornate pulpit of the Abbey’s New Church. The other half of the Abbey’s church is named Old Church, and is well worth visiting for its stained glass Romanesque and Gothic windows. What remains of the original abbey is the immense three-tiered refectory building which although ruined, is nothing short of awe-inspiring.

Pittencrieff Park is a stunning visual backdrop year-round. With flowerbeds bursting with roses and cherry blossom-flecked walkways in spring and summer, to dramatic autumnal displays in woodland groves, tumbling waterfalls and glasshouses teeming with exotic flora in the dead of winter, Pittencrieff is one of the country’s favourite parks – and rightly so!

The Maygate dates back to the Middle Ages and forms part of the city’s photogenic heritage quarter. In fact, it’s one of the best-preserved medieval townscapes in Scotland. There are many historic buildings that will catch your eye, namely the turreted Dunfermline Carnegie Library and 500-year-old Abbot House which will open this summer following renovations.