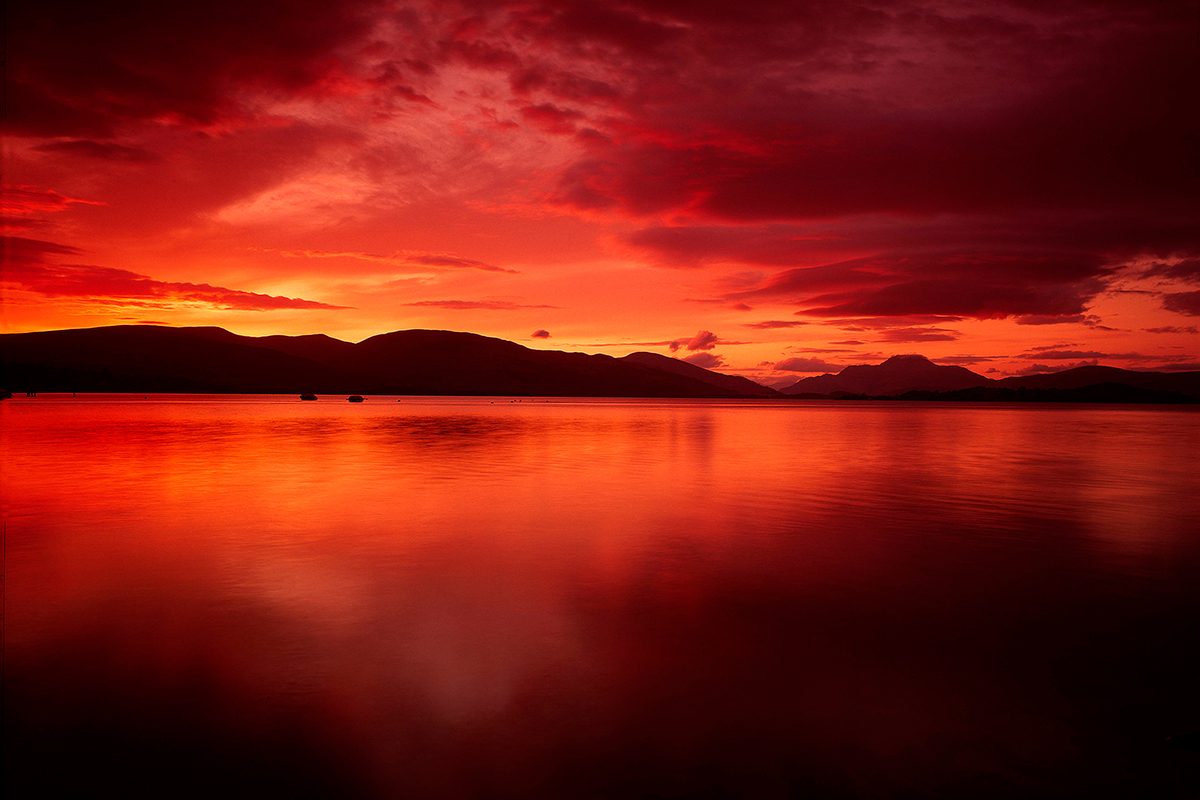 Scotland has produced and inspired many a dark tale. To celebrate this Historic Environment Scotland have teamed up with 12 of the country’s best crime writers to produce Bloody Scotland, a book of short stories inspired by Scotland’s historic built heritage and woven with murder, mystery, horror and suspense.

Follow this trail around Scotland to discover the 12 historic sites and places that feature in the book. 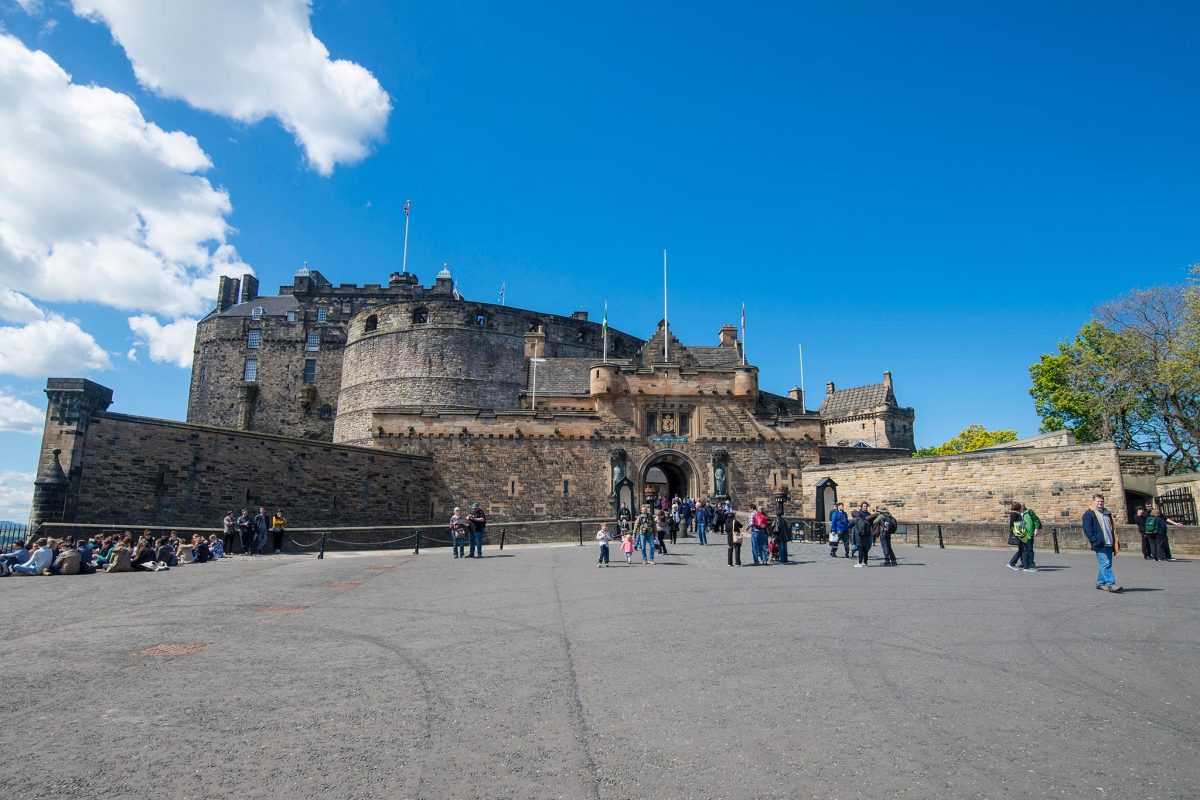 We start at Edinburgh Castle, Scotland’s most visited castle and the inspiration for Denise Mina’s tale of a normal family day out that takes a dark turn.

Edinburgh Castle has played an important part in Scotland’s history. For hundreds of years it has dominated Edinburgh from the top of a volcanic rock, just the sight of it on the city’s skyline has terrified and inspired generations. Check out the breathtaking views across the city and beyond for yourself when you visit the castle.

Once a royal residence, the castle complex includes Edinburgh’s oldest building, St Margaret’s Chapel, the Scottish National War Memorial and the National War Museum. You can also view Scotland’s crown jewels and the Stone of Destiny.

From Edinburgh we travel to the Kinneil Estate near Bo’ness. The estate contains many interesting elements of Scotland’s past, including part of the Roman Antonine Wall, a medieval church and the workshop where James Watt created his prototype steam engine. Visit the Kinneil Museum to find out more.

At the centre of the estate is the 15th century Kinneil House, once the residence of the wealthy and power Hamilton family. The house was saved from demolition in 1936 when rare 16th century wall and ceiling paintings were discovered.  Keep an eye out for the Kinneil House ghost, Lady Alice Lilbourne who met her death after jumping out of a top floor window to escape an unhappy marriage.

Author Sara Sheridan has penned a fictitious tale of Kinneil House’s caretaker and an encounter that leads to dramatic and bloody actions.

Kinneil House is open to the public on selected dates. For more information see the Kinneil Estate website. 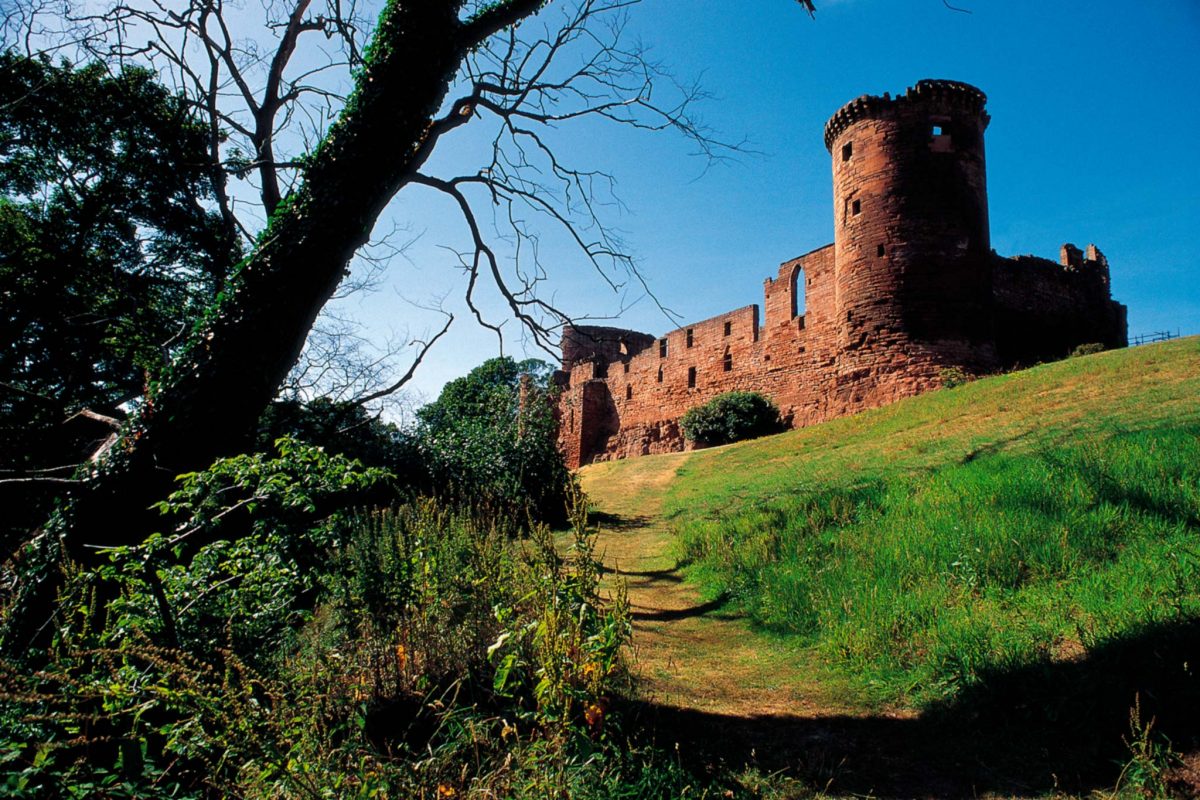 Next on this Bloody Scotland trail is Bothwell Castle in Uddingston, near Glasgow. The castle stands dramatically above a winding curve in the River Clyde could this be why Chris Brookmyre has set his story here?

Built in the late 12th century Bothwell is one of Scotland’s most impressive medieval castles. It was frequently passed back and forth between English and Scottish hands during the 13th and 14th centuries.

When you visit the castle make sure you see the imposing circular keep tower known as the donjon, as well as the grim medieval prison and the impressive 14th century chapel.

Travel to the west side of Glasgow now and to the setting of Gordon Brown’s story of family death and a childhood bully, Crookston Castle.

Built in the 14th century, Crookston Castle is the only surviving medieval castle in Glasgow. Located on a hill to the south west of the city in the middle of the large Pollok housing estate. Crookston was once at the heart of an entirely rural landscape. The land was built upon in the 20th century to relieve overcrowding in central Glasgow.

Crookston is an unusual layout for a Scottish castle. It has a central tower and four square corner towers. During World War Two the military used the castle to watch for enemy aircraft during the Clydebank blitz. 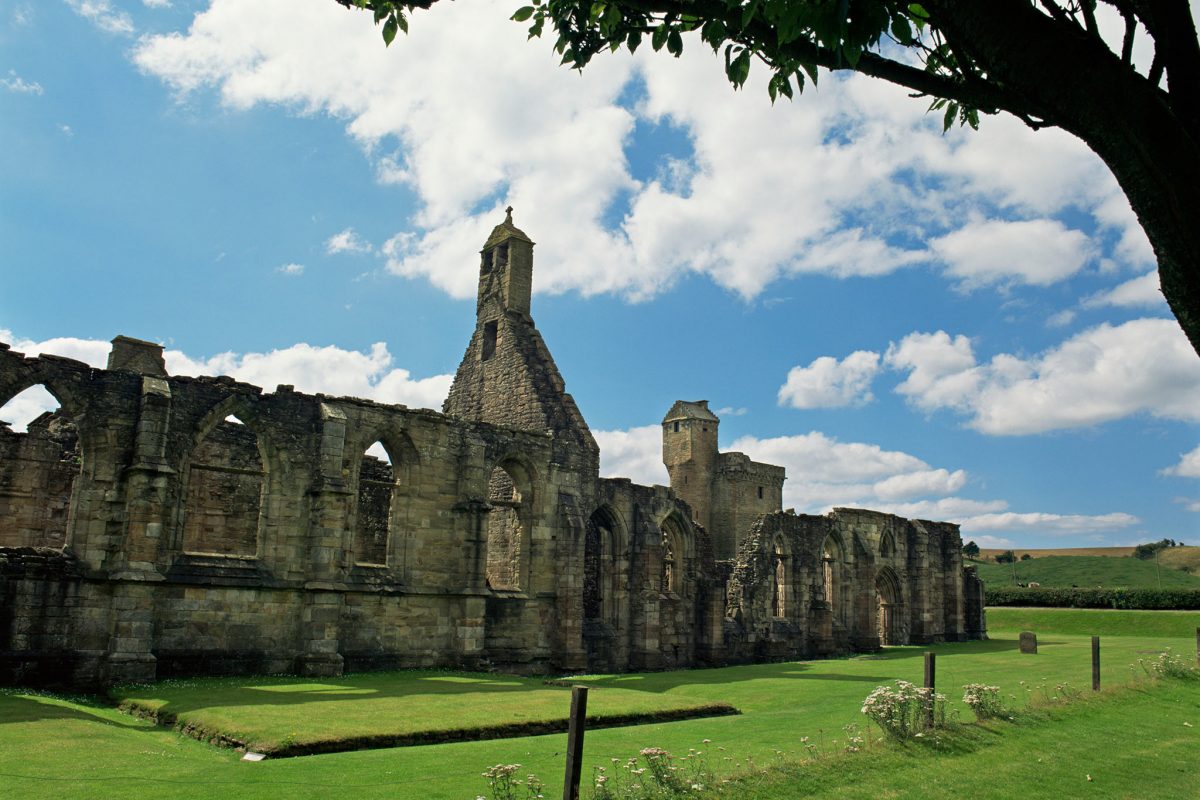 We leave Glasgow now and head to the most southerly point on this Bloody Scotland journey the peaceful ruins of Crossraguel Abbey near Maybole in Ayrshire.

Founded in the early 12th century by monks of the Cluniac order, Crossraguel Abbey was a monastery for over four centuries. Take a walk around the peaceful ruins including, the cloisters and chapter house and find out about the monastic way of life.

Louise Welsh sets her story at the abbey not during the medieval period but in the 20th century after World War Two.

Travel north again to the modernist ruin of St Peter’s Seminary. This building has sat on a hilltop above the village of Cardross near Helensburgh for more than three decades. Designed by Glasgow architects Gillespie, Kidd & Coia in the 1960s, it has gained a cult-like status for its brutal beauty.

St Peter’s was a seminary to train young priests from 1966 to 1979, then briefly a drug rehabilitation centre. The building was finally abandoned in the 1980s. Craig Robertson was inspired to set his story in the ruined building, which follows two security guards as they patrol the vast empty structure.

Today the arts organisation NVA are reclaiming St Peter’s Seminary for the future as a cultural space. While renovation work continues the building can only be accessed on specific dates. For more information check out the NVA events listings. 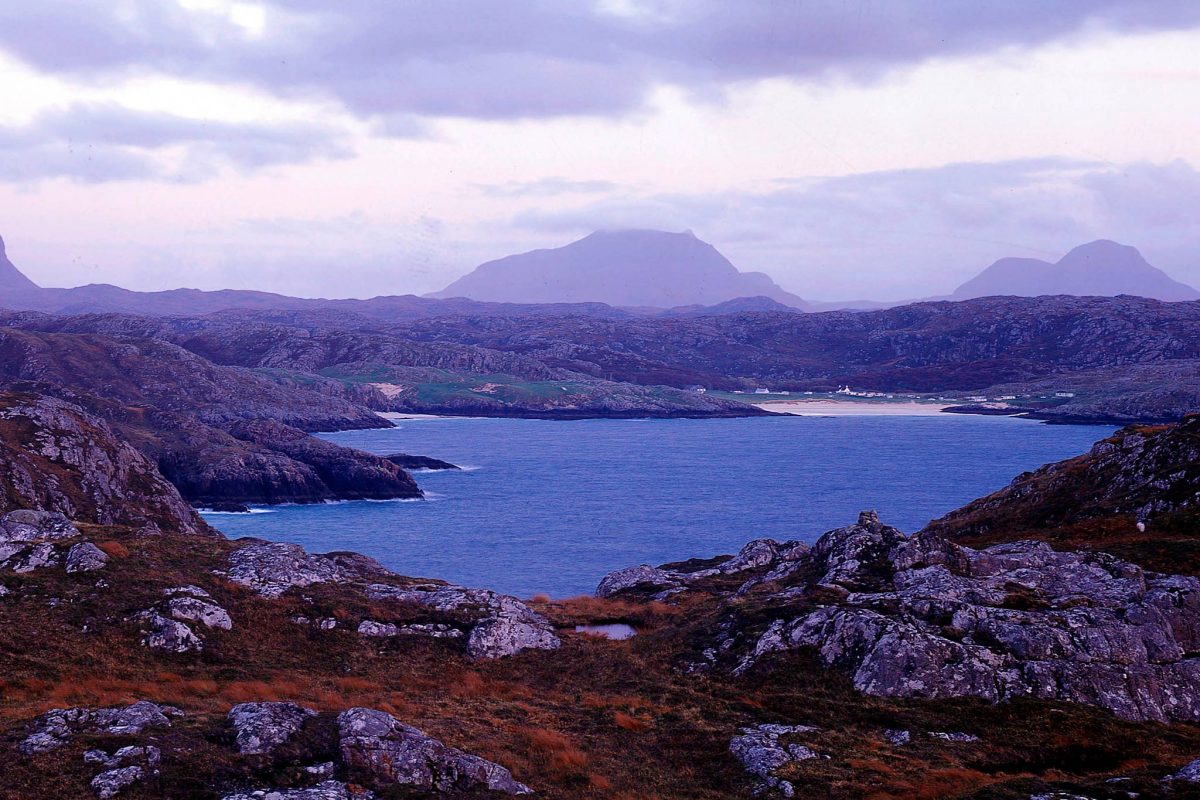 Travel past Loch Lomond and into the Highlands to Achmelvich Bay in Sutherland to find Hermit’s Castle. This unusual castle was created in 1950 from poured-concrete by English architect David Scott. The project took Scott around six months to complete, but he left after spending only one night inside. The interior is one small room with a concrete bed and fireplace.

Tucked amongst rocks, Hermit’s Castle is 15 minutes’ walk from Achmelvich Beach which is a four mile drive down single-track roads from Lochinver.

This is an area of beautifully rugged mountains, lochs and coastline, so it’s perhaps not a surprise that this is one of author Val McDermid’s favourite parts of Scotland and the setting for her story of murder and punishment.

From Achmelvich take time to explore more of the North Highlands and the North Coast 500. 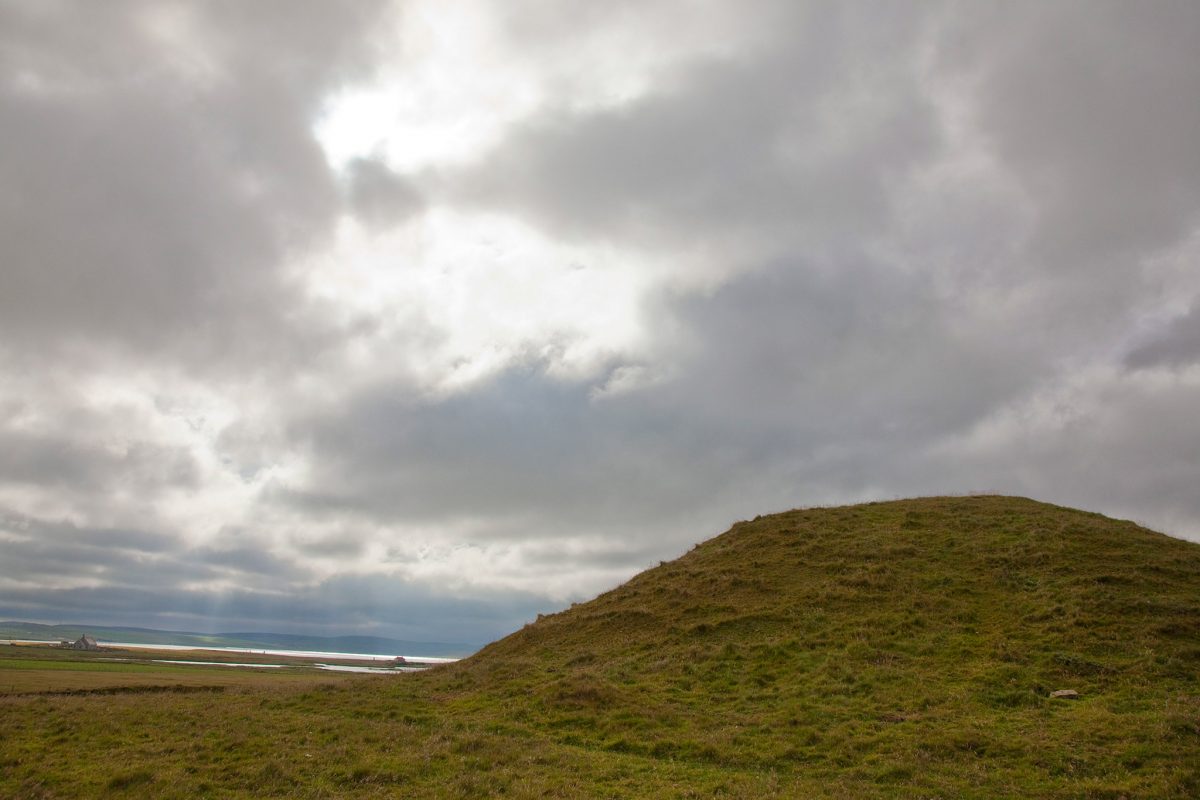 We leave the Scottish mainland now and travel to Orkney for the next Bloody Scotland location.

Built 5,000 years ago, Maeshowe is one of Europe’s finest chambered tombs. The entrance passage was built to align with the setting of the midwinter sun, when the light illuminates the tomb’s interior.

Maeshowe is part of the Heart of Neolithic Orkney World Heritage Site, one of Western Europe’s richest surviving Neolithic landscapes. Take the guided tour to visit the stone circles and burial monuments and see where people lived, worshipped and honoured their dead. Set at Maeshowe, Lin Anderson’s tale of betrayal, power and murder evokes the spirit of this place.

Take time to visit the other Neolithic sites at the Standing Stones of Stenness, the Ring of Brodgar and Skara Brae.

We have reached the most northerly point of this trail Shetland. Ann Cleeves is very familiar with this island and has chosen Mousa Broch as the setting for her tale of retribution and deceit.

Mousa is the best-preserved Iron Age roundhouse in Scotland. Built around 300 BC, it stands 13 m tall with thick walls and a stone stairway that corkscrews between the inner and outer walls to the top. From the top you can appreciate the view and the broch’s impressive position.

Today the main residents of the tower are the storm petrels, which nest there during the summer months. You can visit the Isle of Mousa and the broch by taking a trip on the Mousa Ferry (April-September). 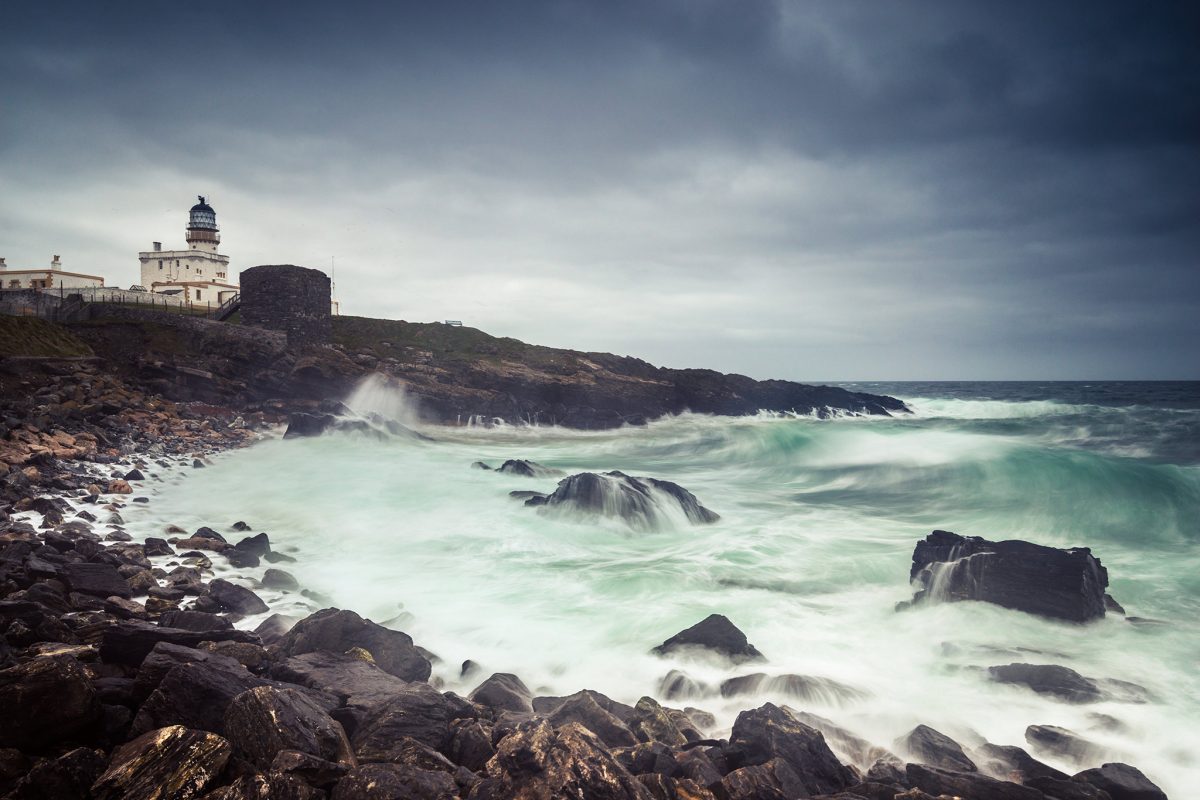 Back to the mainland now with a visit to Fraserburgh and the Aberdeenshire coast.

Stuart MacBride found inspiration at the Kinnaird Head Castle Lighthouse for his stormy story with a killer on the loose.

Kinnaird Head Castle Lighthouse and the Museum of Scottish Lighthouses sits on an exposed position overlooking a rocky coastline and the tempestuous North Sea. Originally a castle it was adapted over the years to work as a functioning lighthouse.

Visit the lighthouse to marvel at its engineering to find out what it would  have been like to be lighthouse keeper on the Scottish coast. 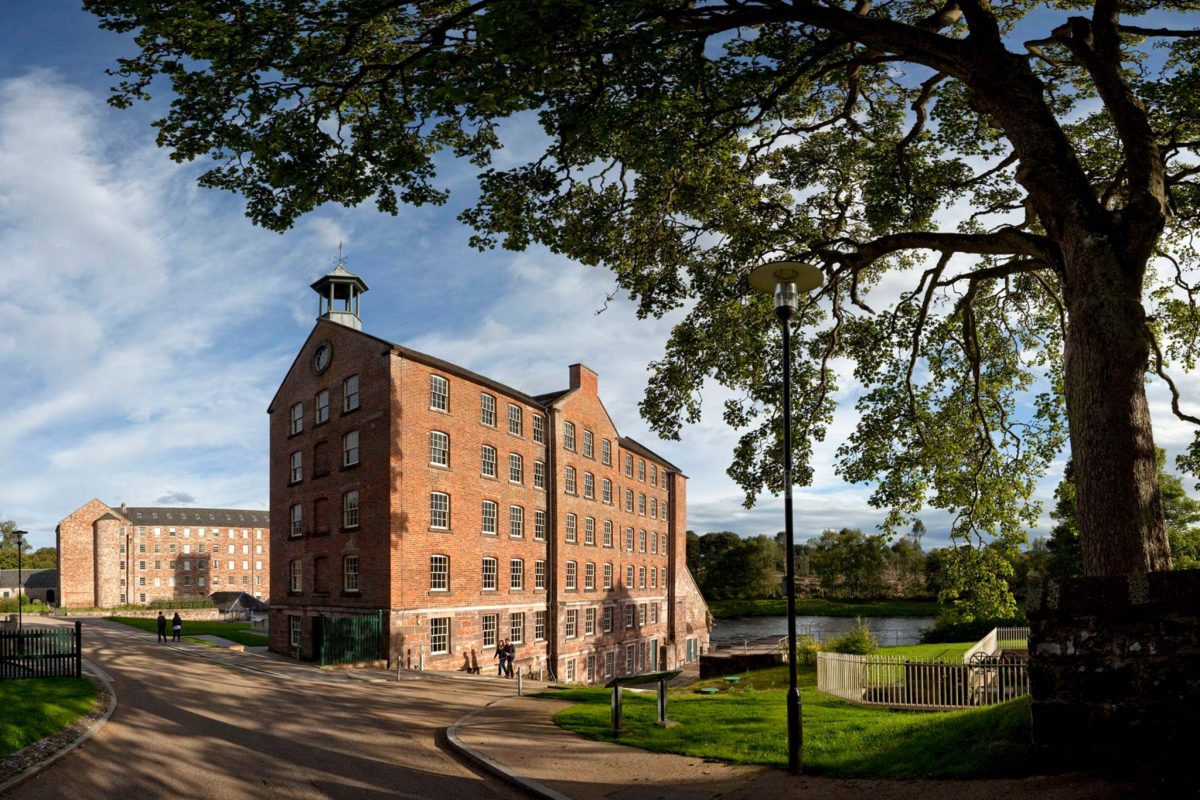 For 200 years, the mill was powered from the River Tay. As the demand for textiles changed and technology developed, buildings were added, adapted, expanded, destroyed by fire, rebuilt, shut down, reopened and demolished. Machinery came and went, powered first by water wheels and then electricity which was generated by water-powered turbines on the site.

Visit Stanley Mills for yourself to uncover the stories of the workers and experience what it would have been like on the factory floor. Please note the seasonal opening times to avoid disappointment.

12. Forth Bridge, Firth of Forth 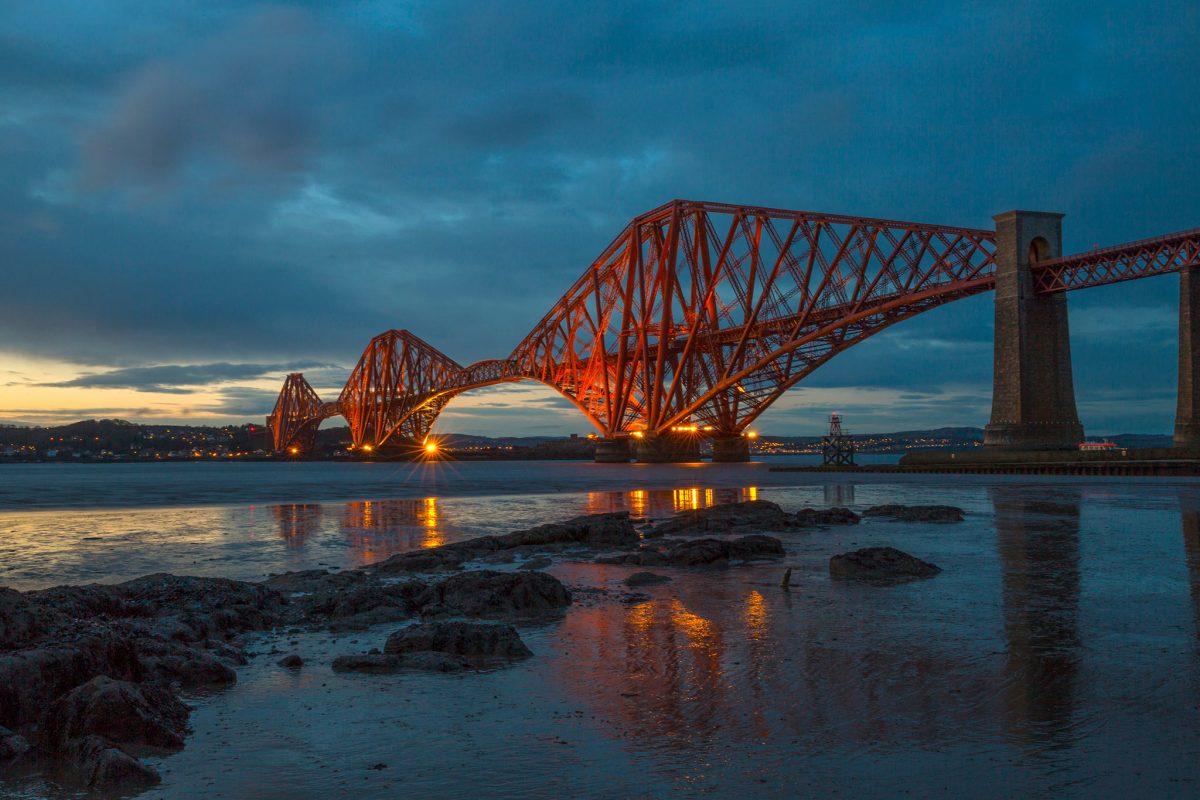 The Forth Bridge across the Firth of Forth

The final stop on this Bloody Scotland trail is the Forth Bridge, the inspirational setting for Doug Johnstone’s short story.

The Forth Bridge spans the Firth of Forth from South to North Queensferry. Opened in 1890, 200 trains travel cross the bridge every day, connecting the north and south sides of the Forth.

The bridge is an internationally recognised icon of Victorian engineering and Scotland’s newest World Heritage Site.

You can admire the bridge’s incredible lattice of red steel from numerous viewpoints on either side of the Forth, from the two road bridges or take a boat trip the Forth. Alternatively, experience the bridge as was intended on a  train ride across.

Bloody Scotland, Scotland’s International Crime Writing Festival is held annually in Stirling, one of the many literature themed events across Scotland. Discover more about Scottish writers and literature and plan your own page turning trip to Scotland.