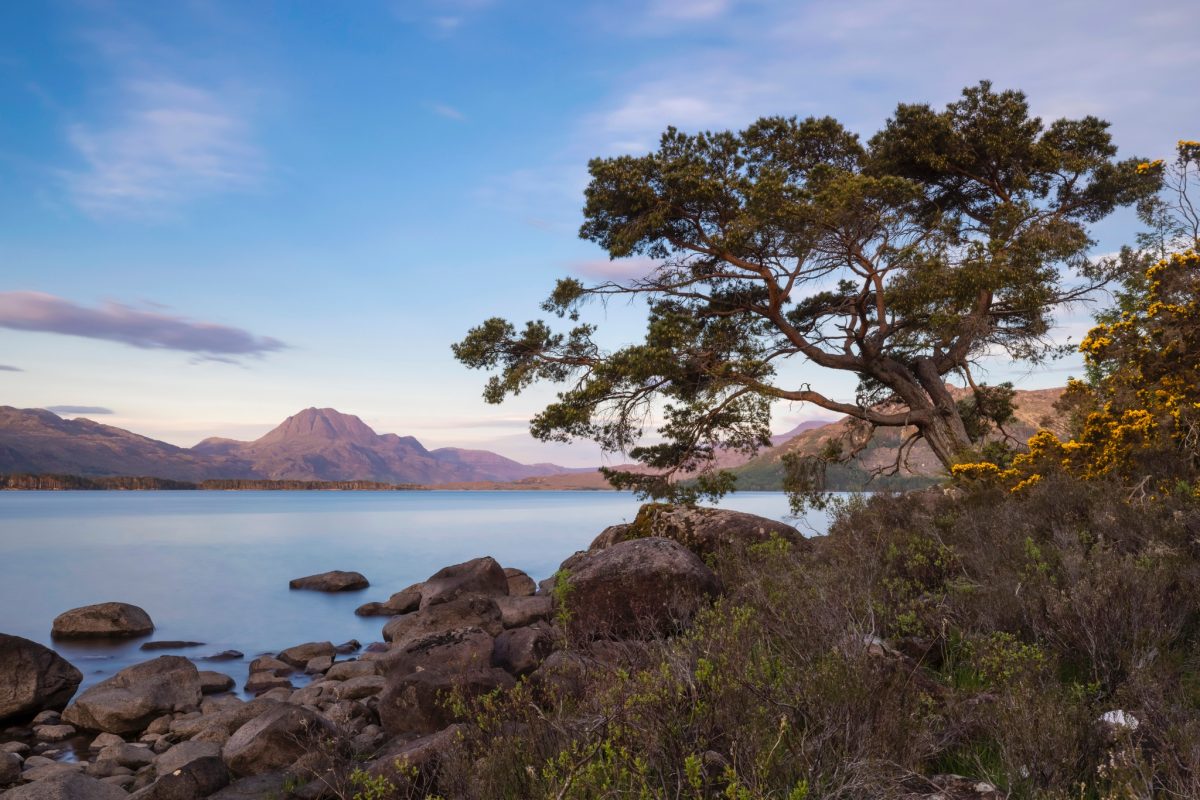 Learn how to speak like a local with these great Scottish words and their meanings. From ‘braw’ to ‘wheesht’, we’ll equip you with the patter (that’s ‘the chat!’) to make the most of your next visit to Scotland!

Have a scroll to learn more about some of our unique Scots words, and have a listen to the recording to hear how they are pronounced too.

Learn more about the Scots language.

A Wee Guide to the Scots Language 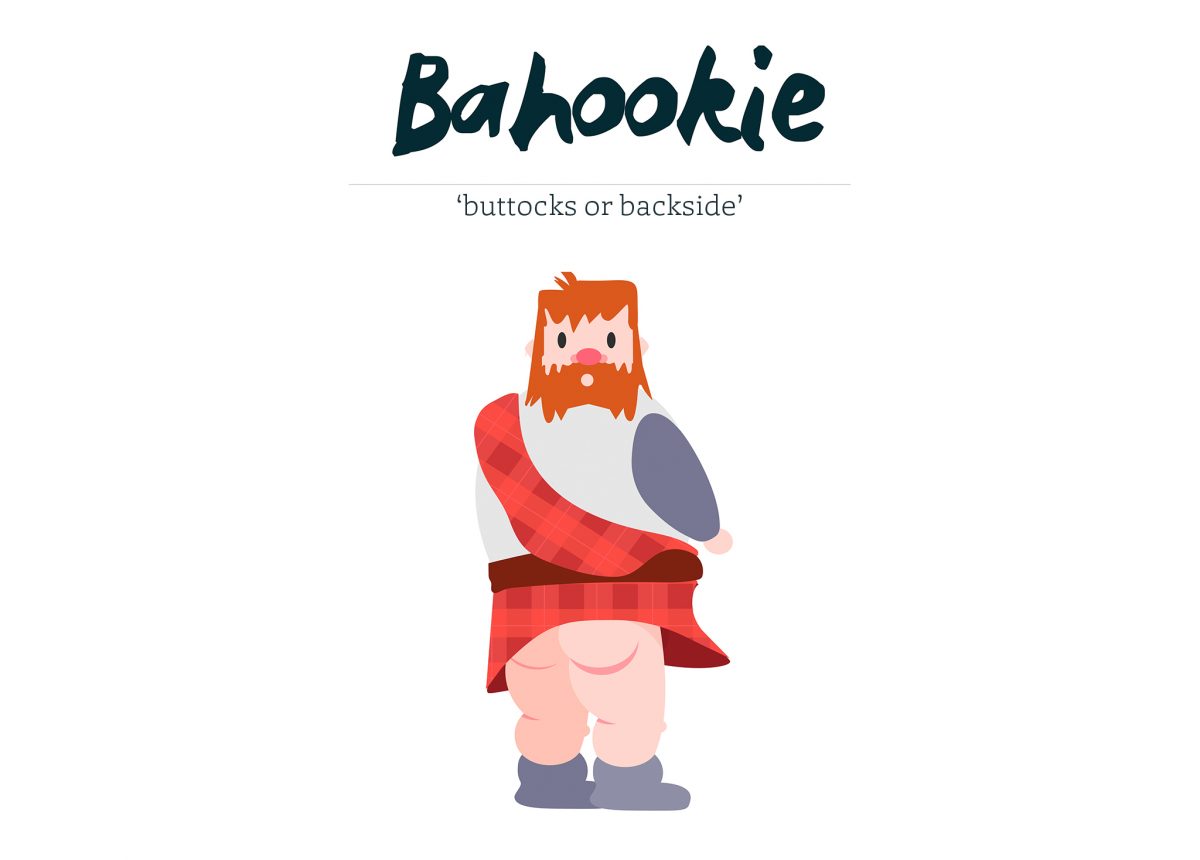 If there’s a more musical way to describe the rear end, we’ve yet to find it.

In a sentence: “The wee yin fell right on his bahookie.”

In English: “The little one fell on his bum.” 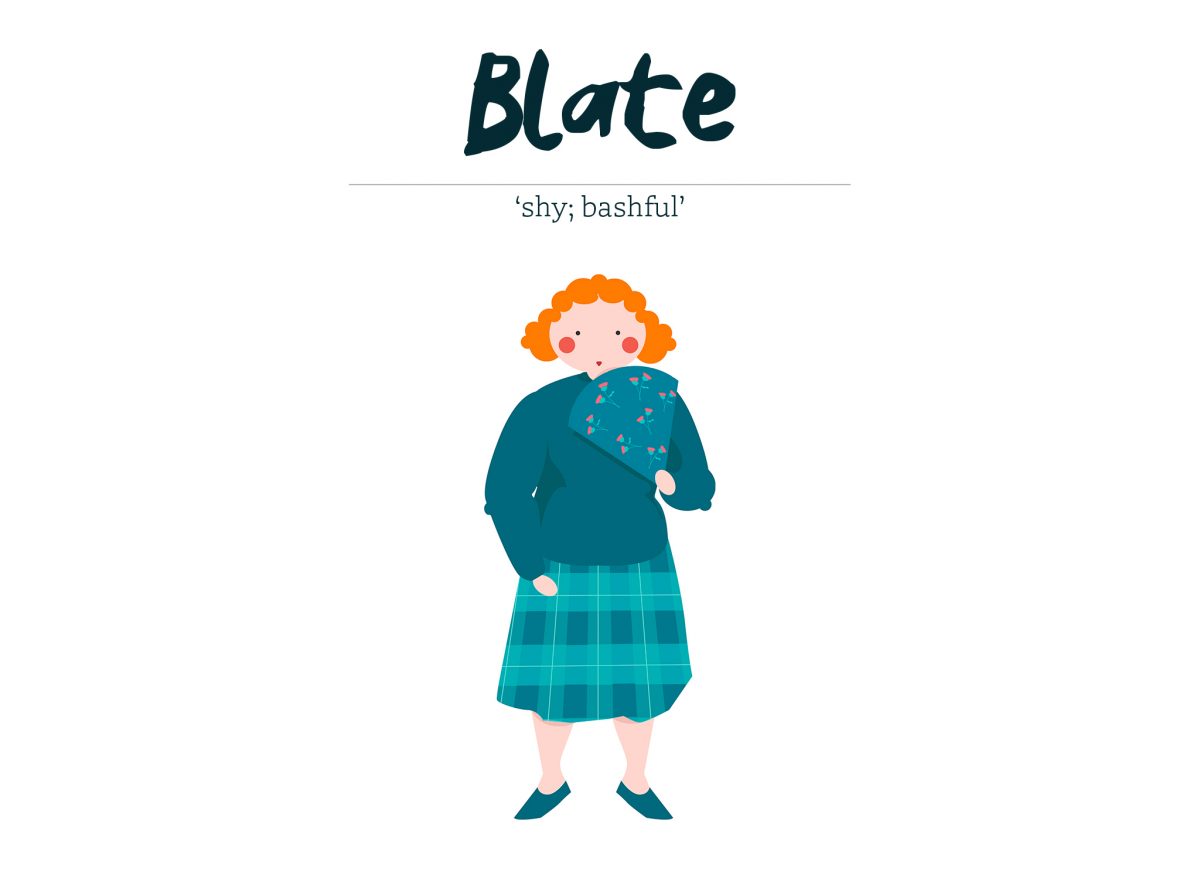 If you find yourself a bit sheepish in the company of a Shetlander, you might just hear this wee Scots gem.

In a sentence: “Dunna be blate; glaep yun down!” 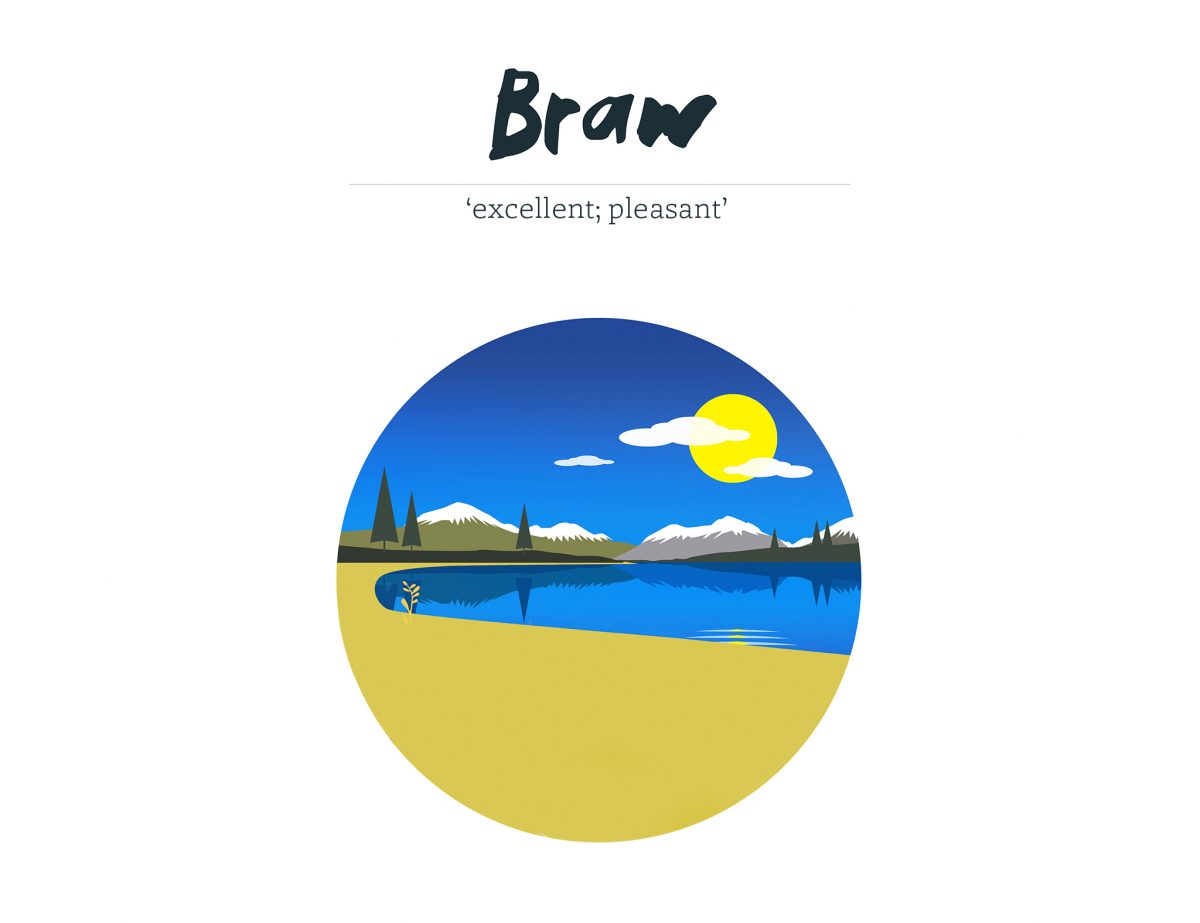 From cuddly Highland coos to soaring, cloud-kissed summits, Scotland has no shortage of braw sights. 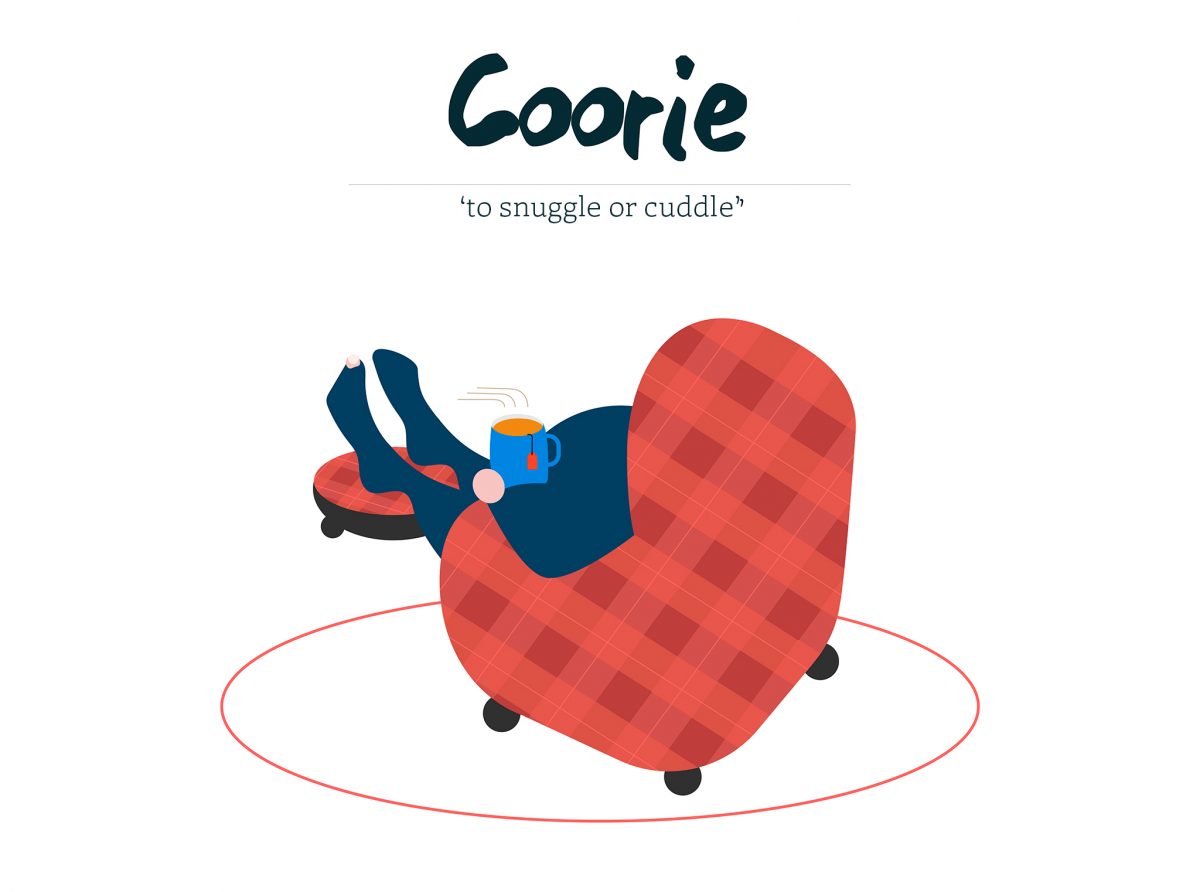 Coorie – to snuggle or cuddle

Think warm woollen blankets, roaring fires, and steaming cups of tea – or something a little stronger!

In a sentence: “It’s awfy dreich; it’s a day fur coorieing in under the covers.”

In English: “The weather is awfully dreary; this is a day for snuggling under the covers.” 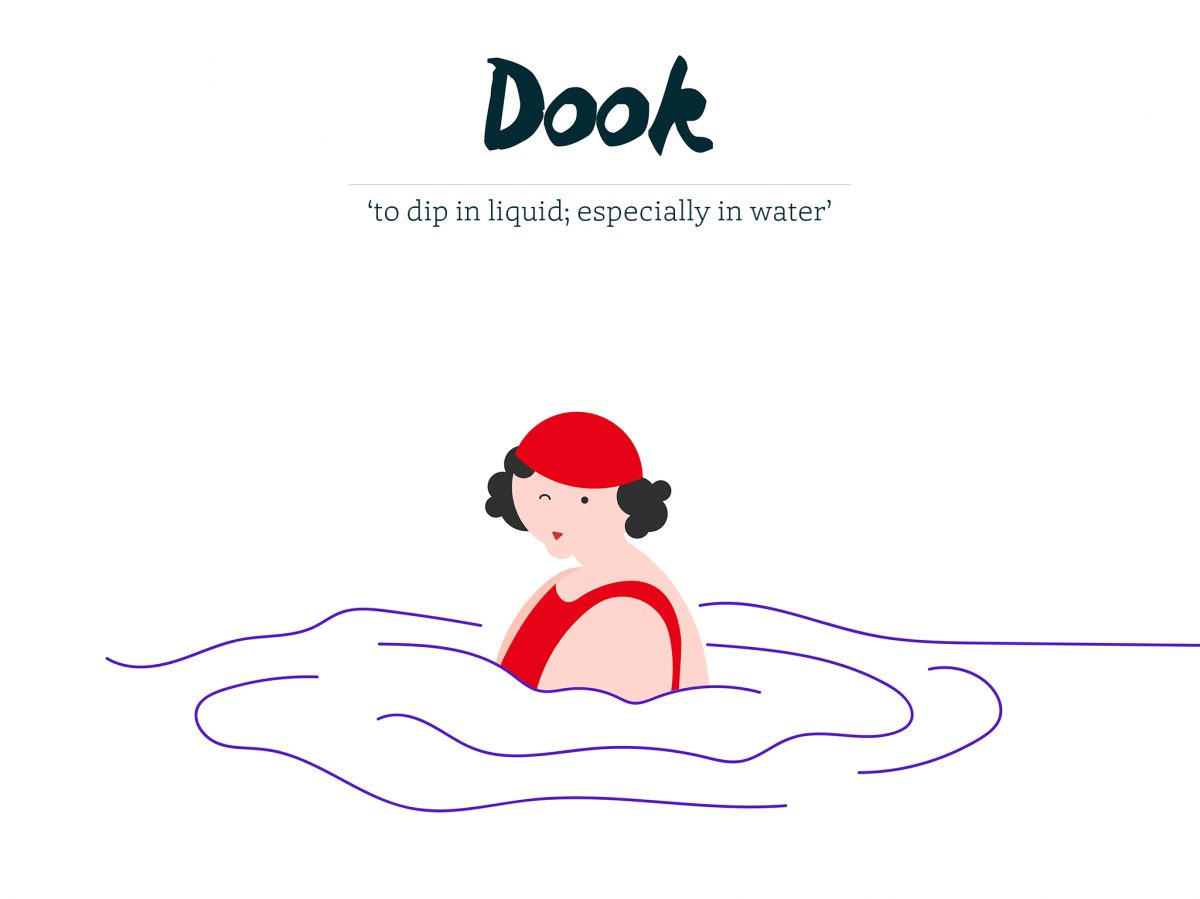 Dook – to dip in liquid, especially in water

Fancy trying your hand at a dook? If you’re brave enough, you can take part in the aptly-named Loony Dook!

In a sentence: “Dook yer haun in the watter an see if it’s cauld.”

In English: “Dunk your hand in the water and see if it’s cold.”

Take from this what you will, but ‘dreich’ has been voted the “most iconic” Scots word several times.

In a sentence: “It’s awfy dreich oot there the day.” 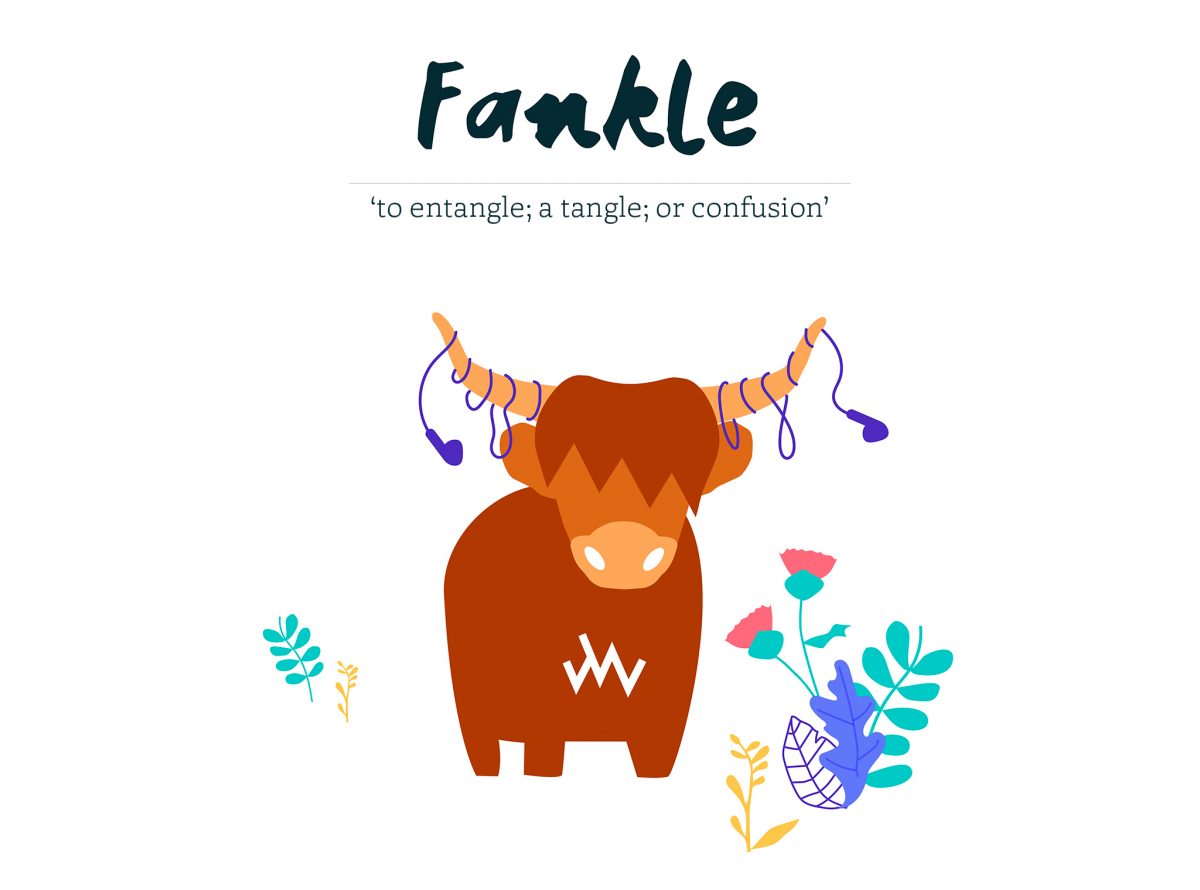 Fankle – to entangle, a tangle or confusion

Whether describing shoelaces or situations, fankle is a fantastically versatile bit of language.

In English: “My headphones are all tangled.”

This is Glasgow summarised in six letters.

In a sentence: “He’s pure galllus, that yin.”

In English: “He’s very cheeky, that one.”

As well as some beautiful phrases, Scots is a language filled with unusual insults.

In a sentence: “Dinnae be so glaikit – dae something!”

In English: “Don’t be so thoughtless – do something!”

Verb: To talk foolishly; to babble

The popularity of this word owes a debt to the dulcet tones of a pair of bespectacled twins from Fife.

In English: “Get away – you’re talking nonsense!”

Try to avoid ‘keeking’ during your travels in Scotland – the views deserve a longer look!

In a sentence: “Goan take a keek oot the windae.”

In English: “Go and have a quick look out of the window.”

In Aberdeenshire, there are no ‘boys’ and ‘girls;’ there are ‘loons’ and ‘quines.’

In English: “Where have you been, boy?” 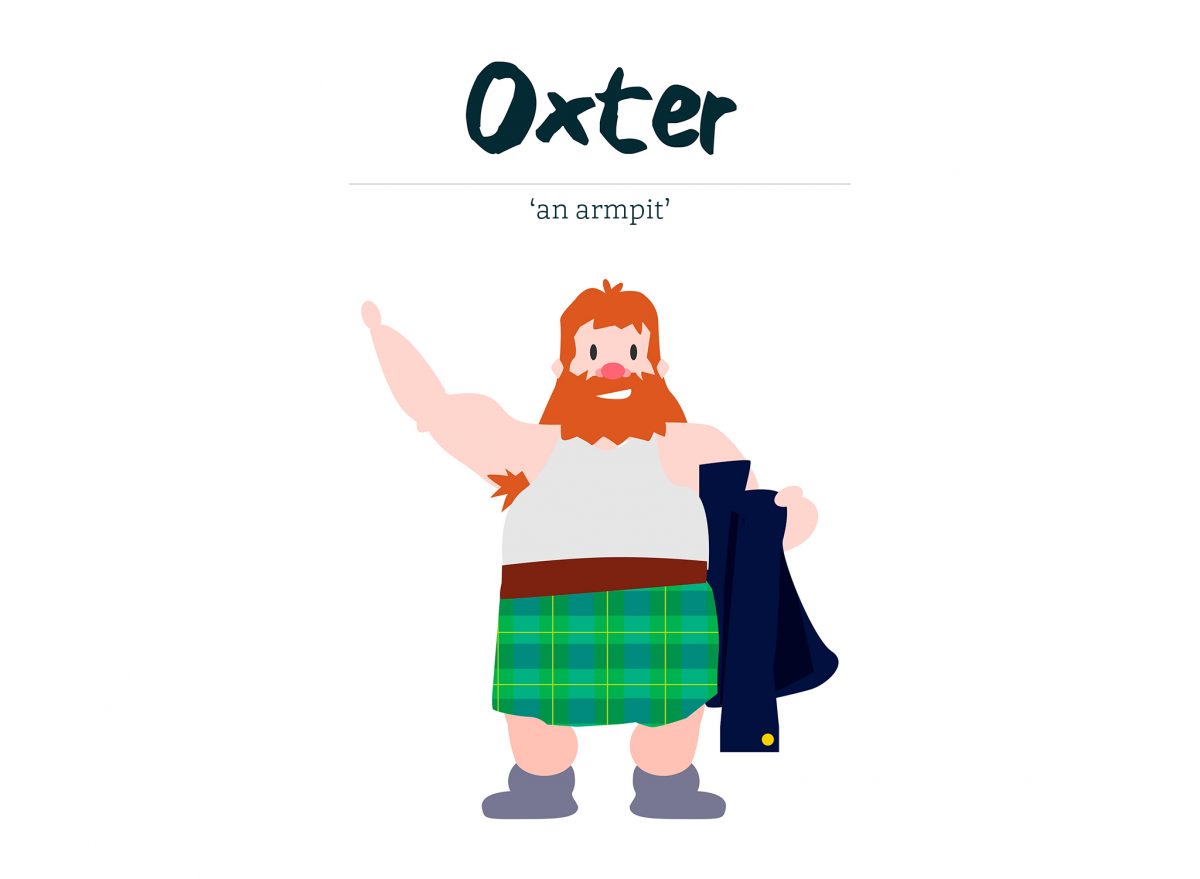 In Scotland, you’re not busy; you’re ‘up to your oxters in it.’

In a sentence: “Him there, wae the jaikit tucked in his oxter.”

In English: “That man over there with the jacket tucked in his armpit.” 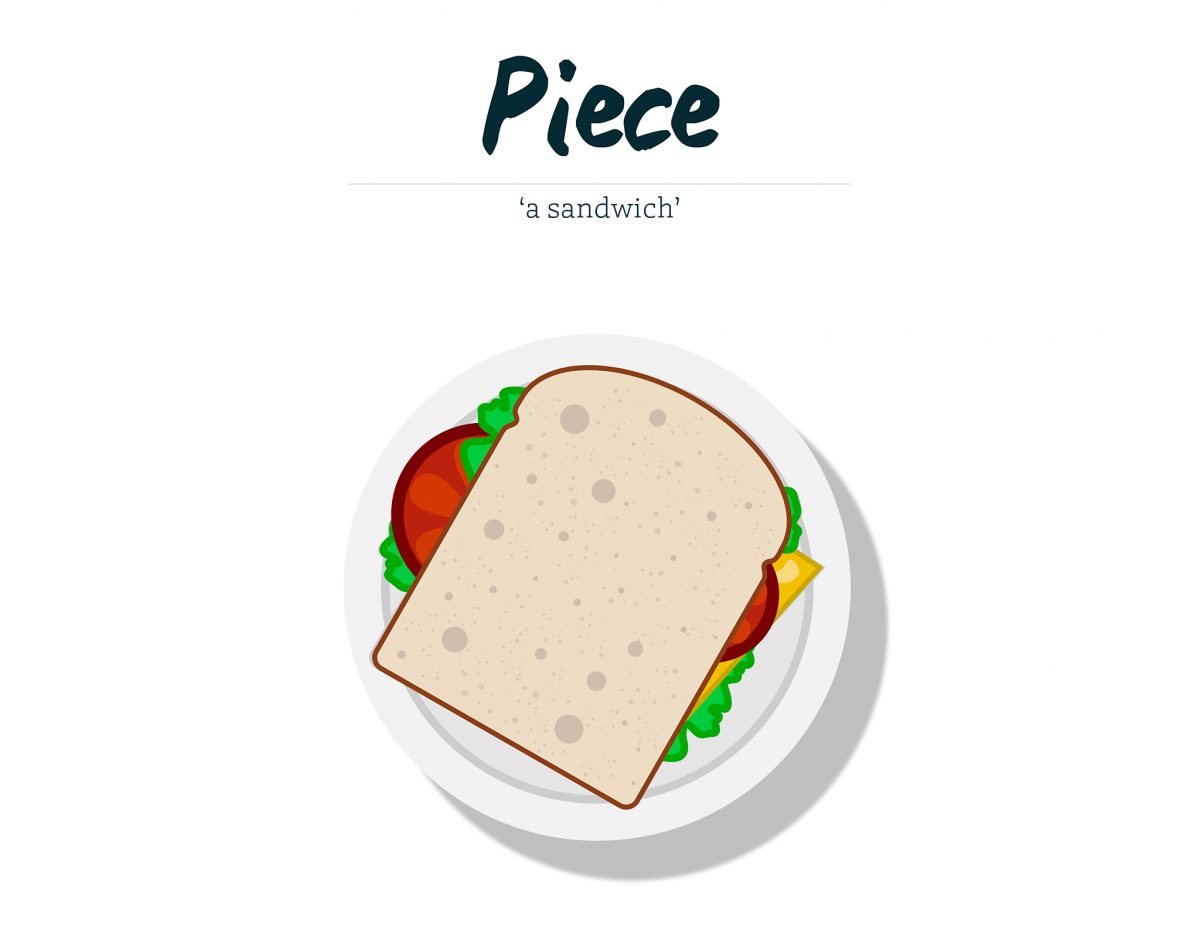 Whatever the filling, whatever the bread, in Scots it’s known as a piece.

In a sentence: “Canny believe that – av forgoat ma piece.”

In English: “I can’t believe it – I’ve forgotten my sandwich.” 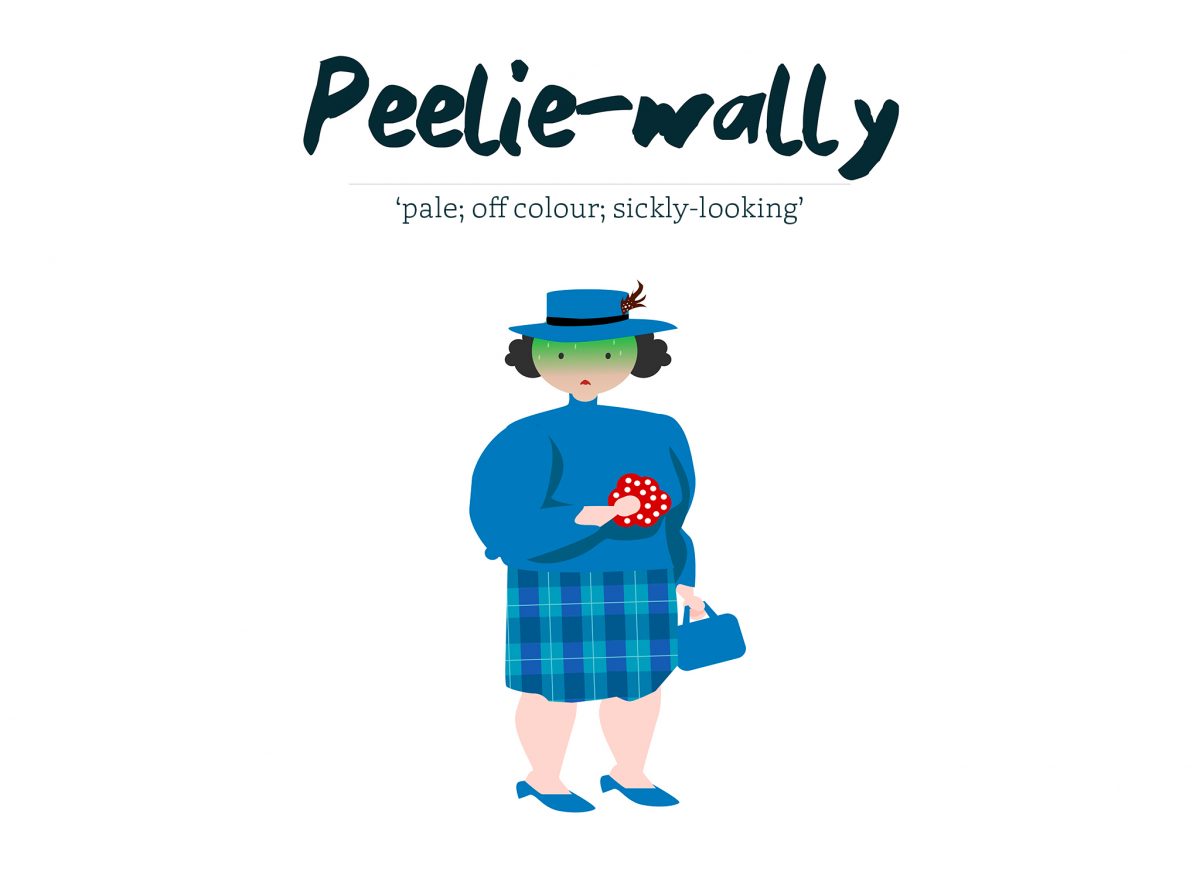 Only in Scotland can looking unwell sound so whimsical! 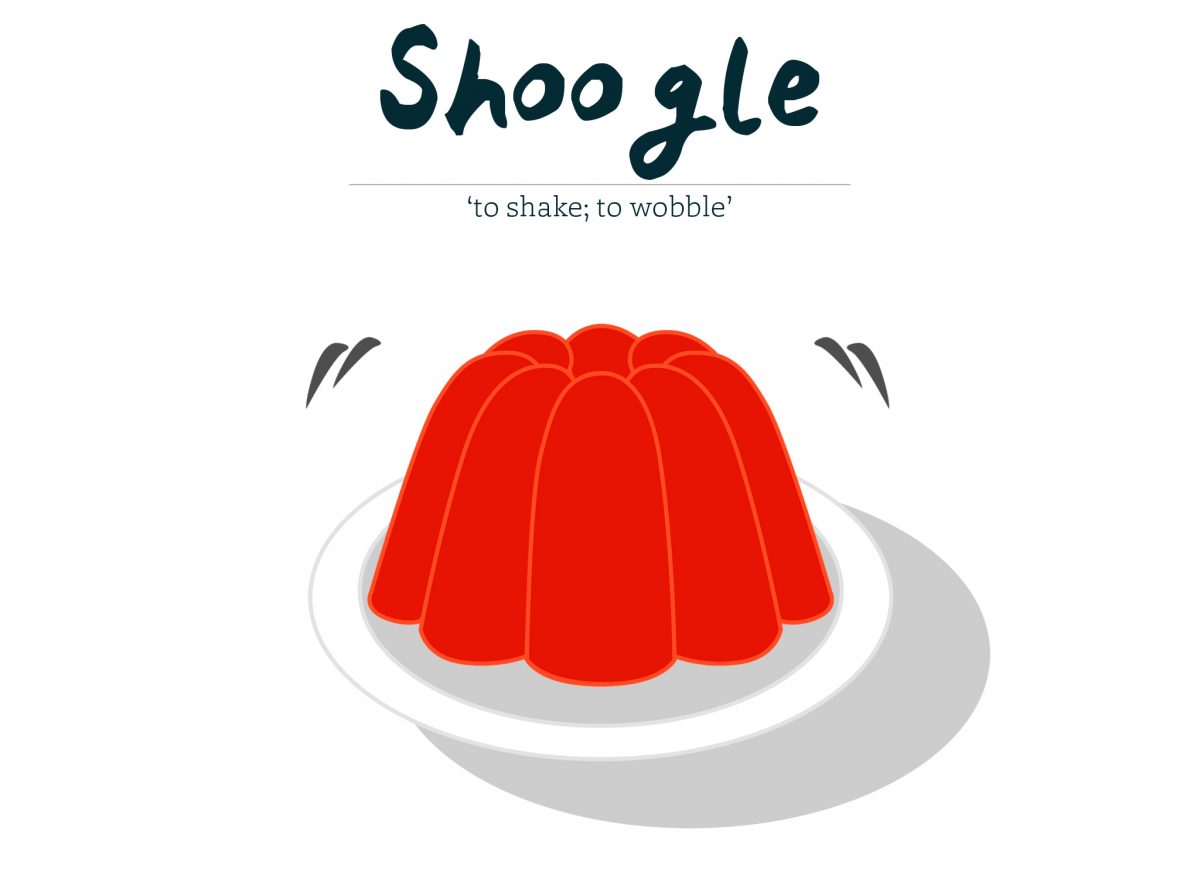 Shoogle – to shake, to wobble

Scots is a wonderfully illustrative language – you can practically see the word ‘shoogle’ wobbling as you read it.

In a sentence: “Jist gie it a wee shoogle and it’ll come loose.”

In English: “Just give it a small shake and it’ll come loose.” 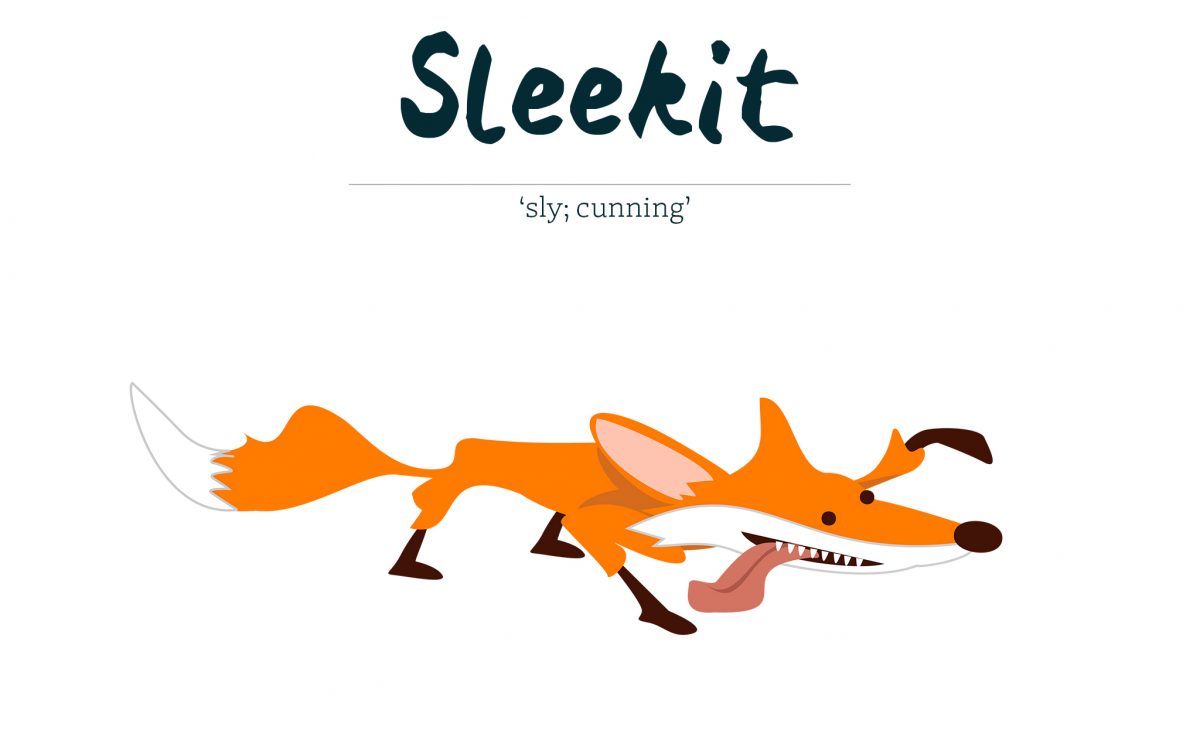 Sleekit is one of the best-known Scots words, thanks to our National Bard Robert Burns using it to describe a field mouse. 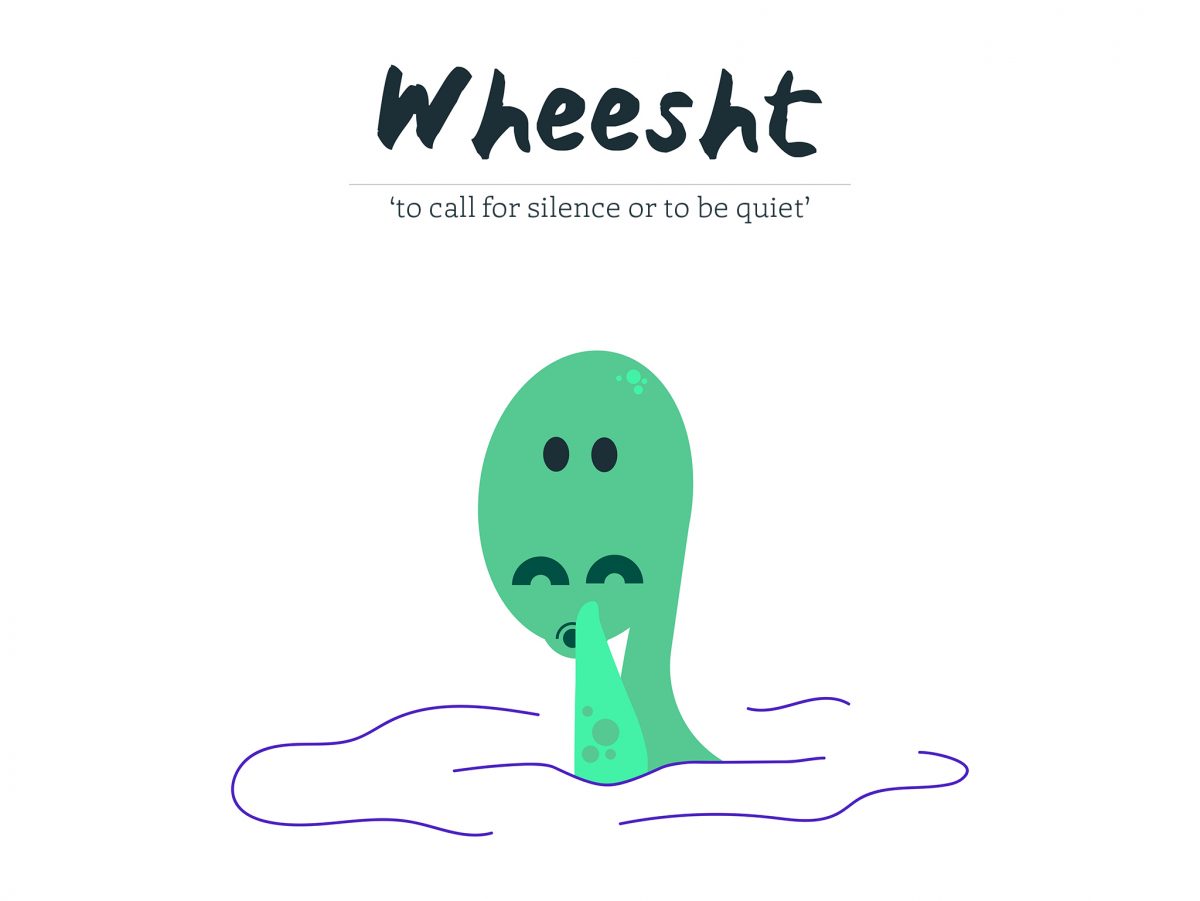 Wheesht – to call for silence or to be quiet

A fitting end to our whistle-stop tour of Scots – silence!

In a sentence: “Wheesht!”

About the Scots language

Don’t know your bahookie from your oxter? Don’t worry – you’re not alone. ‘Scots’ may be the national name for the language, but there’s much more to it than a single spoken tongue.

There are four main Scots dialects: Insular (spoken in Orkney and Shetland); Northern (uttered from Aberdeen all the way down to Angus); Central (said everywhere from Glasgow to Dumfries and Argyll); and Southern (heard in the bonnie Borders).

But that’s not all. Within each of the main dialects, there are several sub-dialects – each of which can sound very different. As a result, you’ll hear a huge range of words on your adventures around Scotland’s cities, towns and villages – often describing the same thing!

A cheeky child in Aberdeen, for example, is an ‘ill-trickit bairn.’ Meet an equally-mischievous kid in Glasgow, though, and you might hear them called a ‘gallus wean.’ Scots is a language with a huge number of local varieties, each with its own distinctive character, and part of the experience of travelling around Scotland is hearing it straight from the mouths of locals – and possibly asking what it means! Whatever you do, just make sure you don’t call it ‘slang!’ Check out our list below to get a head start on the local lingo.

Of course, Scots is just one of three native languages spoken in Scotland today, the other two being English and Scottish Gaelic. Fancy learning more about our founding language?

Explore our guide to Gaelic language and history