Working from home doesn’t have to be dull! Spending more time at home just now means that you can get stuck into a new hobby or keep yourself entertained with a wealth of digital resources to check out. Whether you want to listen to the very best of Scottish music or get sucked into a good podcast, keep yourself busy at home with Scotland in your heart as we give you the lowdown on some of the greatest bands, artists and podcasts that we think are worth a listen.

Get wrapped up in a podcast 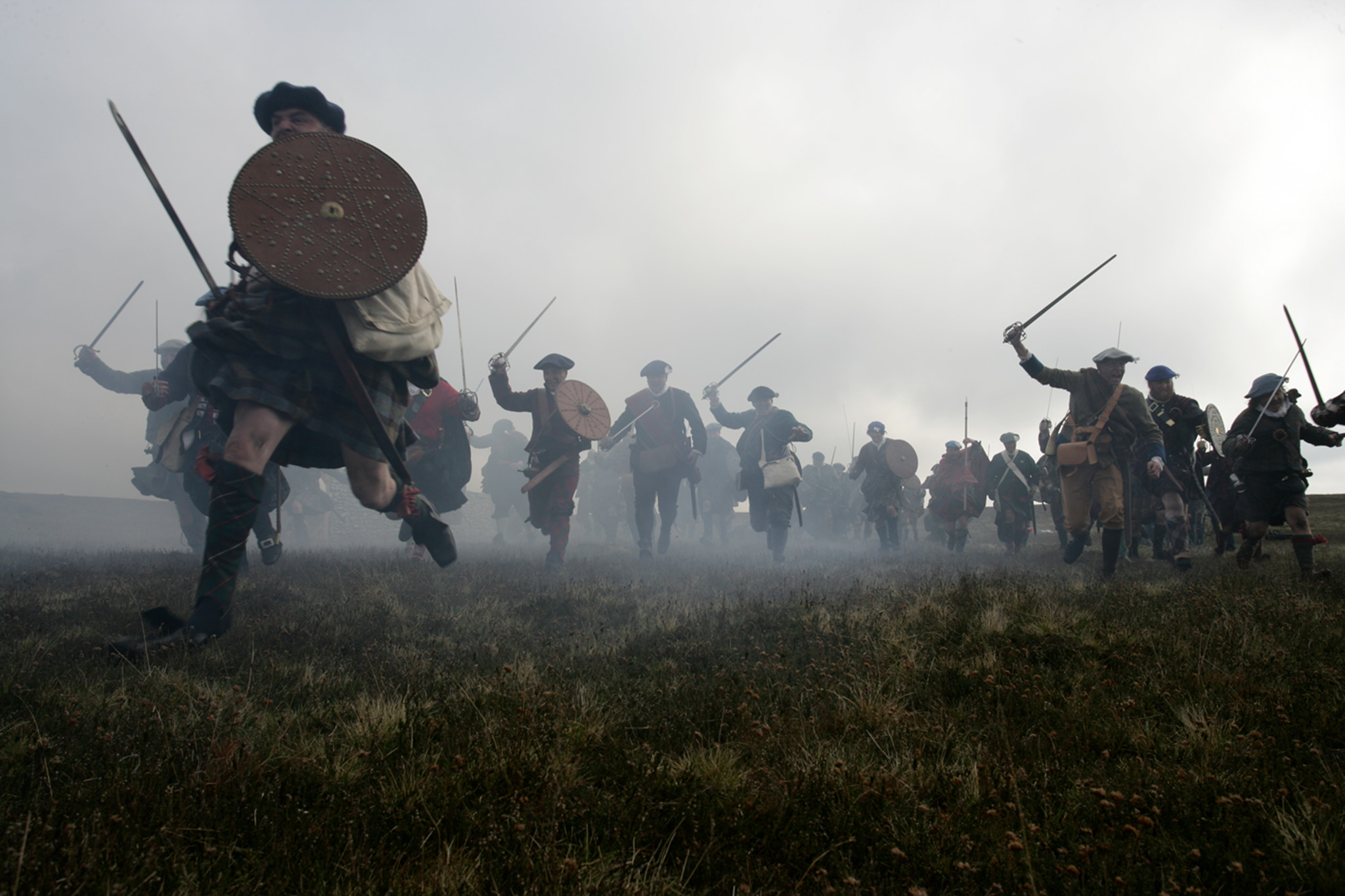 Step back in time and delve into Scotland’s rich history and heritage with a wide range of podcasts to help keep you entertained. Explore A Short History of Scotland which looks back on the history of the country from Roman times to the last Jacobite Rebellion. Download History Scotland – Hidden Histories podcast, shedding light on hidden historical gems that you might not even know about and with 44 episodes to listen to, you’ll be a history buff in no time! If you love all things witchcraft, make sure to check out the Witch Hunt.

Feeling inspired to cook up a storm in the kitchen now that you’ve got a little more time in the house? Listen to The Kitchen Café where top Scottish chefs come on the show each week to talk about delicious recipes for you to try out at home, all whilst using some of the finest Scottish produce.

A trip to Scotland may not be on the cards just yet but that doesn’t stop us from bringing its wonderful beauty to you in the comforts of your own home. A collaboration between BBC Radio Scotland and The Open University, A Walk Around Scotland allows historical audio guides to take you on a whirlwind trip around different places and attractions in Scotland without leaving your sofa. A perfect alternative for a sense of escapism! If you simply can’t get enough of Scotland, we also recommend having a listen to our 100,000 Welcomes podcast, with five episodes exploring different themes from nature, landscape and scenery to Scotland on the big screen!

Bring the classroom to your living or dining room and make lessons fun with a wide range of educational podcasts to choose from. Every day is a school day with Brainwaves. Explore the science behind everyday life with key scientists each week talking about what it is like to work in Scotland. If you fancy something a bit more gruesome, The Scottish History podcast is a great way to bring the subject to life while learning lots of new things!

If it’s one thing that keeps us going through a busy working day, it’s listening to a bit of good music! Start your day off right and keep yourself going with some of the best and most iconic Scottish musicians that should definitely be added to your playlists.

If you’re a fan of rock, then you will love Biffy Clyro! Hailing from Kilmarnock in East Ayrshire, Biffy Clyro have released seven studio albums, four of which (Puzzle, Only Revolutions, Opposites and Ellipsis) reached the top five in the UK Albums Chart. Get yourself through the working day by listening to hit songs such as Many of Horror, Mountains, and Bubbles. Did you know, many Biffy Clyro fans can be heard chanting Mon the Biffy! or Mon the Biff! in between songs at gigs or when the band is about to come on stage?

This band really needs no introduction. The Scottish rock band Simple Minds formed in Glasgow in 1977 and have gained international success with their string of hit songs, including the critically acclaimed Don’t You Forget About Me which featured in the 1985 film The Breakfast Club and other prominent hit singles Alive and Kicking and Belfast Child. The band’s name originates from the lyrics of David Bowie’s song The Jean Genie which is believed to be about Iggy Pop.

We already know you have our Scottish Beyoncé on your playlist, but we wanted to give him an extra mention just in case! The singer/songwriter from Bathgate, West Lothian has been taking the world by storm with his Grammy nominated song Someone You Loved which reached number one on the UK Singles Chart for seven consecutive weeks. If you can’t get enough of Capaldi’s songs make sure to check out his debut album Divinely Uninspired to a Hellish Extent with smash hits including Grace and Hold Me While You Wait.

Originally one of the founding members of the band Stealers Wheel, Gerry Rafferty has also shot to fame as a successful solo artist. You will no doubt find yourself humming along to classics such as Night Owl, Get it Right Next Time and of course, who can forget Baker Street, Rafferty’s most successful song of all time.

Having gained major international success with the 1980’s band Eurythmics featuring hits such as Sweet Dreams (Are Made of This), There Must Be an Angel (Playing with My Heart) and Here Comes the Rain Again. Annie Lennox has also managed to embark on a successful solo career with her 1992 debut album Diva producing classics such as Why and Walking on Broken Glass. With 3 Grammy awards, 7 Brit Awards, a Golden Globe and an MTV Video Music Award under her belt she has been dubbed as the most successful female British artist in UK music history due to her commercial success from the early 1980s and beyond. A definite must for your playlist!

Many might recognise Primal Scream’s song Come Together featuring in the 1996 film Trainspotting. The band’s psychedelic and garage rock influence, and touch of dance music, helped them to break into the mainstream with their 1991 album Screamadelica winning them several accolades, including the first ever Mercury Music Prize in 1992.

Formed in Glasgow in 2011, Chrvches are one of Scotland’s best breakthrough bands within the last 10 years, ranking fifth on the Sound of 2013 list by the BBC. The band have also managed to make waves across the pond performing their hit song The Mother We Share on the US Talk Show Late Night with Jimmy Fallon.

Breaking into the spotlight in 2004 with her live solo performance of Black Horse and the Cherry Tree on Later, with Jools Holland, KT Tunstall has since gone onto become a household name with a string of hits including Suddenly I See and The Other Side Of The World. Did you know the name for Tunstall’s debut album Eye to the Telescope was inspired by spending most of her time at her father’s physics laboratory at the University of St Andrews?

Taking their name from a family of fugitive’s in Stephen Spielberg’s 1985 film The Goonies, listening to the band’s catchy songs will be sure to put you in a good mood! The Fratelli’s biggest hit Chelsea Dagger is a definite must to play at full blast and sing your heart out!

Born and bred in Dumfries, superstar DJ Calvin Harris is one of Scotland’s most successful acts! Since the release of I’m Not Alone in 2009 which scored him his first UK number one, Harris has gone onto achieve global success collaborating with artists such as Rihanna, Ellie Goulding and John Newman. His third studio album, 18 Months topped the UK charts and became his first to chart on the Billboard 200 in the US. All eight of the album’s singles, including Bounce, Let’s Go, We’ll Be Coming Back, Sweet Nothing, Drinking from the Bottle, I Need Your Love, Thinking About You, Feel So Close, and We Found Love reached the top 10 of the UK Singles Chart.

All of these great bands and artists will definitely help you get your music fix, but if you fancy discovering unsigned Scottish alternative and indie bands and artists, we recommend giving a listen to the Scotland Introducing podcast. Or if you want to feel nostalgic make sure to tune into the Classic Scottish Albums podcast where different Scottish artists come on to talk about the inspiration behind their critically acclaimed albums. Previous guests have included Emeli Sande, the lead singer/songwriter Roddy Frame from Aztec Camera, and Alex Kapranos, the lead singer of Franz Ferdinand.

Feel like brushing up on your speaking skills in the mother tongue of Scotland? Now is your chance! Check out the Speaking our Language podcast on the Learn Gaelic website, a podcast series with 18 episodes taking you through step by step the basics of conversational Gaelic – a must for beginners! Keep yourself busy while WFH and take bite-size Gaelic lessons through Duolingo with game-like lessons covering a whole range of different themes and topics or, if you feel more advanced, have a listen to the Sguel is Seanchas podcast series which focuses on a mix of traditional, historical and humorous stories in Scottish Gaelic.

Tune into Live Nation or Gigs in Scotland to hear more from some of Scotland’s top artists and their incredible works of art!

Explore more fun Scottish things to do at home

These are just some of the things that we think are great to listen to. Explore more fun Scottish things to do at home or if you have any other recommendations worth shouting about, let us know down in the comments.